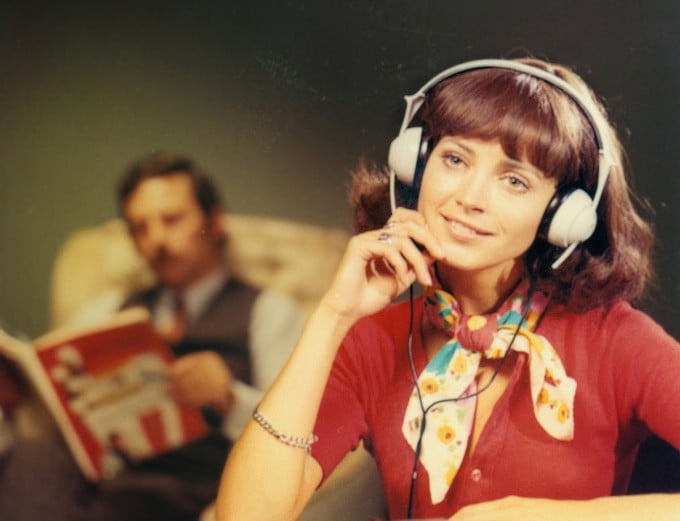 This past fall, along with the rest of the world, I got hooked on the podcast Serial. I loved walking around the neighborhood listening to Sarah and Adnan (he was framed!), and once it ended, I wanted another podcast but didn’t know which were good. So, we asked my friend Kim Fusaro — an obsessive podcast enthusiast — to recommend seven of her favorites…

My husband and I started listening to podcasts on long car rides together because each of us has a limited tolerance for the other’s taste in music. (His: twangy blues sung by people named Jimbo. Mine: Top 40.) When we moved from Brooklyn to New Jersey, I found that listening to podcasts on my own made time in the car—back and forth from preschool and work and Trader Joe’s, sometimes all in the same day — a more little interesting than the aforementioned Top 40.

IF YOU’RE Looking for dinner party conversation fodder
LISTEN TO This American Life
WHY YOU’LL LOVE IT A mostly non-fiction narrative, This American Life, a weekly show on public radio, reminds me of watching 60 Minutes with my dad growing up. It has “won all the major broadcasting awards,” with good reason: The hour-long episodes are smart, thought provoking and entertaining. Each episode has a theme (e.g., summer camp, superpowers, neighbors, babies switched a birth) and typically features three to four wide-ranging stories on that topic.
TRY THIS EPISODE Break-Up

IF YOU’RE A parent or future parent
LISTEN TO The Longest Shortest Time
WHY YOU’LL LOVE IT This podcast (by a mom in New Jersey) gets up close – sometimes uncomfortably so – and personal with what motherhood looks like to me: There’s anxiety and messy husband-wife dynamics and wanting to murder your ob-gyn when she says, “You’re fine to have sex!” six weeks after you gave birth. It also features stories about parents in atypical situations who are all trying do the exact same thing every parent is: their best.
TRY THIS EPISODE When Are You Gonna Be Normal Again?

IF YOU’RE Behind on your reading, but love a good story
LISTEN TO The Moth
WHY YOU’LL LOVE IT This podcast features recordings of a live, on-stage series, where regular people tell five-minute personal stories. You’ll get a glimpse into the most memorable moments of their lives: a guy giving the world’s worst best man speech or a daughter dropping off coffee at her mom’s office — in the Twin Towers on September 11, 2001. Writers and actors drop by, too, including Malcolm Gladwell, Ethan Hawke, Molly Ringwald and Annie Proulx.
TRY THIS EPISODE Listen Here, Fancy Pants!

IF YOU’RE Fantasizing about starting your own company
LISTEN TO StartUp
WHY YOU’LL LOVE IT In the words of its producers, StartUp is “a series about what happens when someone who knows nothing about business starts one.” This is a podcast you’ll listen to in order, starting with host Alex Blumberg’s first steps toward building a startup after walking away from his career as a radio journalist. (The first episode will make you cringe.) Spoiler alert: He succeeds. But not without hitting some major bumps along the way.
TRY THIS EPISODE How Not to Pitch a Billionaire

IF YOU’RE Missing Serial
LISTEN TO Undisclosed
WHY YOU’LL LOVE IT This new podcast, which started on April 13, picks up where the wildly popular Serial podcast left off. Rabia Chaudry, the host (a lawyer in Serial), delves further into the 1999 murder of Maryland high school student Hae Min Lee and the subsequent conviction of her ex-boyfriend, Adnan Syed, “from an investigatory perspective instead of a narrative one.”
TRY THIS EPISODE There’s only one so far.

Tip: If you find a podcast you like, listen closely. Podcast narrators are ALWAYS recommending good new podcasts. Next on my to-try list are Love + Radio, which my husband won’t stop raving about, and On The Media, which explores how the media “sausage” is made. And here’s a quick guide on how to download and listen to podcasts.

Thoughts? Do you listen to any other podcasts? We’d love to hear recommendations…

P.S. A Serial parody and one of my first Cup of Jo posts (about podcasts).

Kim Fusaro is the lead writer for Glamour’s weddings blog, Save the Date. She’s also an avid runner, a compulsive chocolate eater (hence the running), and the mother of two young children, one very old cat and a small dog.

Love the podcast You Must Remember This which is dedicated to the forgotten tales of the first hundred years of Hollywood.

Just finished listening to “Dirty John”. My husband I both thought it was awesome!

If you like This American Life, you’ll also be a big fan of Reply All! So glad to have stumbled upon your blog from Whimsical September.

No proof that Adnan was framed in Serial series 1. She could have reduced that series down from like 12 episodes or whatever it was down to like 4 episodes

I have a really long commute to work, so I’m kind of a podcast junkie. These are my favorites: http://likelybysea.com/best-podcasts-creative-inspiration/

Modern Love
Death, Sex & Money
and Sex with Emily is fun (if there are no little ears to hear)

I would encourage all of you check out The #1 Paranormal Podcast on The Planet, Cosmic Castoff! It’s funny, and not too serious! Also, ALIENS!!!!!

Thanks, this is what I need, I’ve been looking for a good podcast for some time :D

Interesting elements that i found in this post really thanks for sharing this amazing stuff i am always in search of this kind of posts and i have bookmarked your blog to visit here gain so keep updating ..!!!

I love World Citizen Storycast :) I was interviewed on there last year!
I also like Elizabeth Gilbert’s Magic Lessons, and Dear Sugar!

Max Fun/NPR’s Bullseye with Jesse Thorn is probably the best culture interview show there is (besides Fresh Air.)
The New York Public Library’s podcast sometimes has unbelievably great conversations between amazing writers and literary greats. (Toni Morrison and Angela Davis! Zadie Smith and Chimamanda Adichie!)
For a fun and challenging look at US politics and Beyoncé from a Black progressive perspective: TWIB Prime

Stuff you missed in history class is hands down my favorite podcast! So addicting

While my boyfriend and I were driving to Nashville ~approx. 3-4 hrs, we listened to The Moth podcast and LOVED it!! I especially loved that they were real people telling stories about their various awesome, sad, humorous and often times relatable stories. Thank you for sharing this!!

Call Your Girlfriend is my absolute favorite! Also love Another Round and The Lively Show.

Oh I love this list! My favorite, hands down, is NPR’s Radio Lab. They take an everyday situation and drill down on it- you start learning all these super interesting science/history/psychology things along the way. In fact, when Making a Murderer came out, I remembered their interview (“Reasonable Doubt”) with the woman who had originally put Steven Avery in jail- Penny Beernsten. They had picked up on the story a long time ago.!

While my boyfriend and I were driving to Nashville ~approx. 3-4 hrs, we listened to The Moth podcast and LOVED it!! I especially loved that they were real people telling stories about their various awesome, sad, humorous and often times relatable stories. Thank you for sharing this!!

Oooohhh, so happy to read this post. I’ve been absorbed to the point of feeling like my brain is going to explode by listening to the Smart Passive Income Podcast (which is super informative but overwhelmingly so) and Jess Lively (super-motivational-heart-warming-goodness). I’m ready to branch out, so thanks!

Been listening to TAL for years. Make sure you listen to Switched at Birth. It’ll blow your mind. In a provocative and good way.

I totally agree with you.
I’ve tried to share this with a lot of people, because, as you said, it will BLOW YOUR MIND.

DEAR SUGAR is by far my favorite podcast ever!!

The Splendid Table with Lynn Rossetto Kasper, love to listen to it while cooking on Sunday.

I think you would really enjoy “The First Day Back” podcast, about a documentary filmmaker exploring her jump back into her career after being away for 6 years of being a stay-at-home mom. It’s wonderful and thought provoking!

Check out Sawbones if you haven’t already! Husband/Wife duo + their bits at the beginning are hilarious. Essentially, it’s a podcast about medical history, which can get pretty awesome.

Another good podcast about movies, tv, and other pop culture is Rhyme et Reason Radio (rhymeetreason.com/podcast).