Have You Been Watching the Olympics? 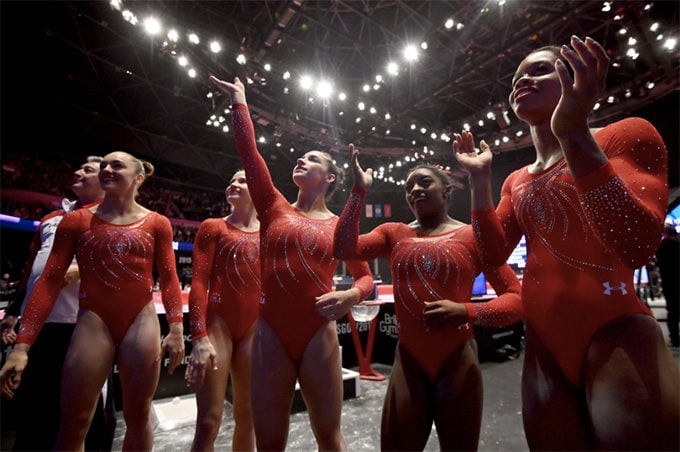 Have you been watching the Olympics? The women’s all-around gymnastics competition aired today, and American superstar Simone Biles (second from right above), hailed as the best gymnast in history, won gold. We can’t wait to see how the rest of the games go down. Here are 10 things from Rio that have made us smile… 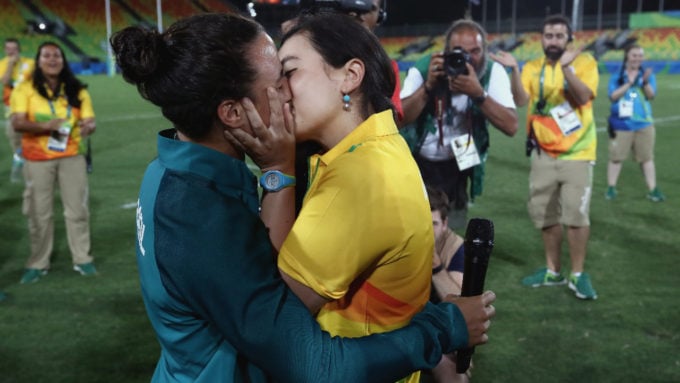 A record number of out LGBT Olympians are competing, including the first gay married couple. There was also a sweet proposal on the rugby field between Brazilian athlete Isadora Cerullo and her girlfriend, Marjorie Enya (above). Two more great firsts: a team of refugee athletes and the first U.S. Olympian to compete wearing a hijab.

Gymnast Laurie Hernandez has been nicknamed The Human Emoji because of her signature wink, above, and other animated facial expressions. Also, her competition mantra, “I got this,” is awesome.

When gymnast Aly Raisman performs, her parents are so adorably nervous. 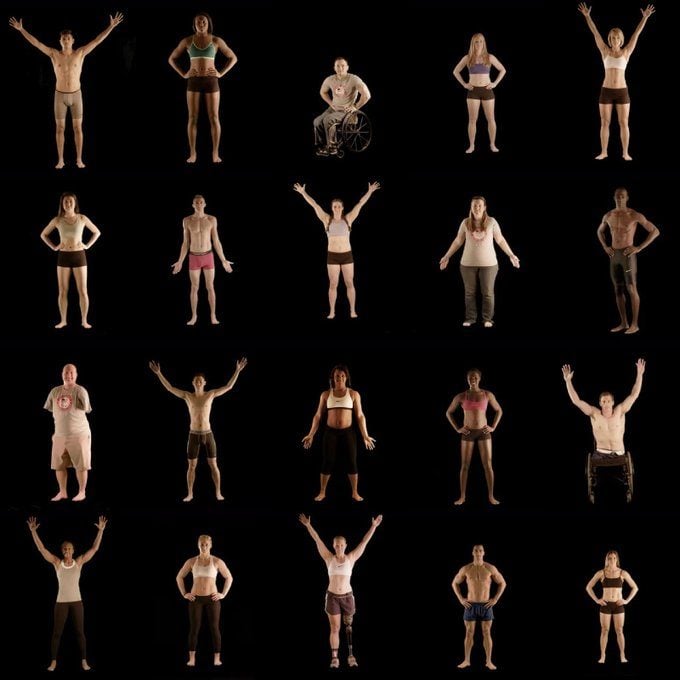 Can you guess which sport these U.S. Olympic and Paralympic athletes play based on their body types? 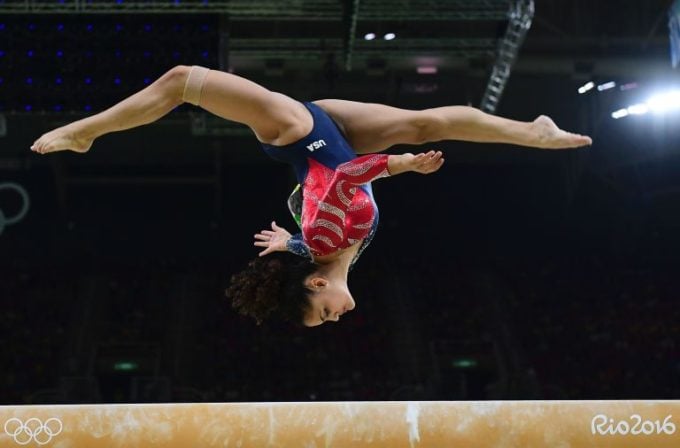 The sparkly leotards worn by the Team U.S.A. gymnasts take two years to produce, involve 5,000 Swarovski crystals each and are custom fit to their bodies. And then there are the water polo players’ fluffy official Olympic bathrobes. 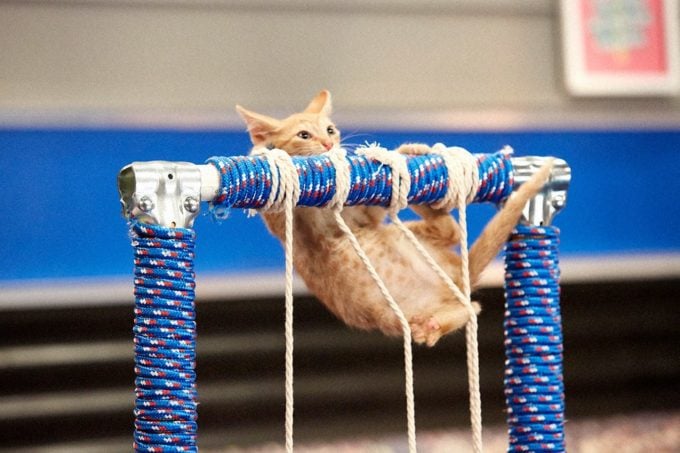 Kittens available for adoption are competing in a series of Olympic-style events, including the balance beam and wrestling. Meow. 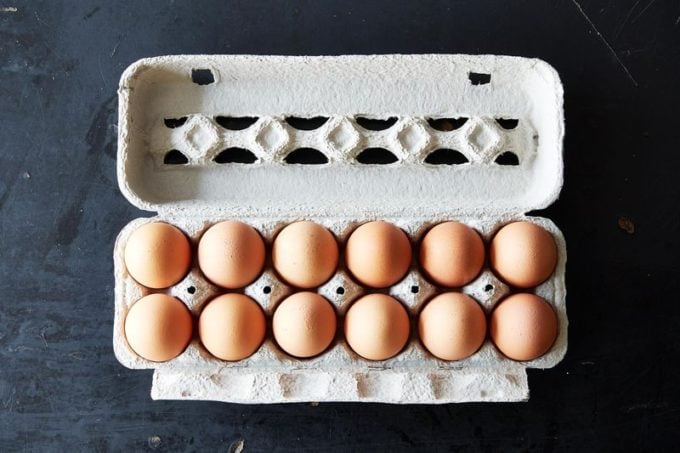 What does U.S. swimmer Ryan Lochte eat? A LOT. “Five to six eggs with spinach, tomatoes, and ham. And hash browns (or some kind of potatoes). And pancakes. And oatmeal (‘I love oatmeal’). And fruit. And French vanilla coffee with one sugar and cold milk.” 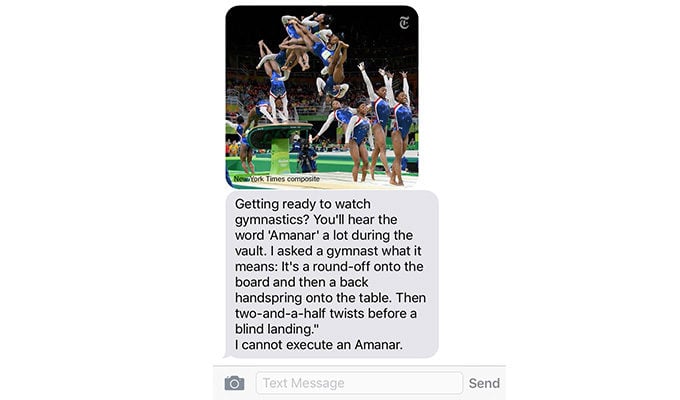 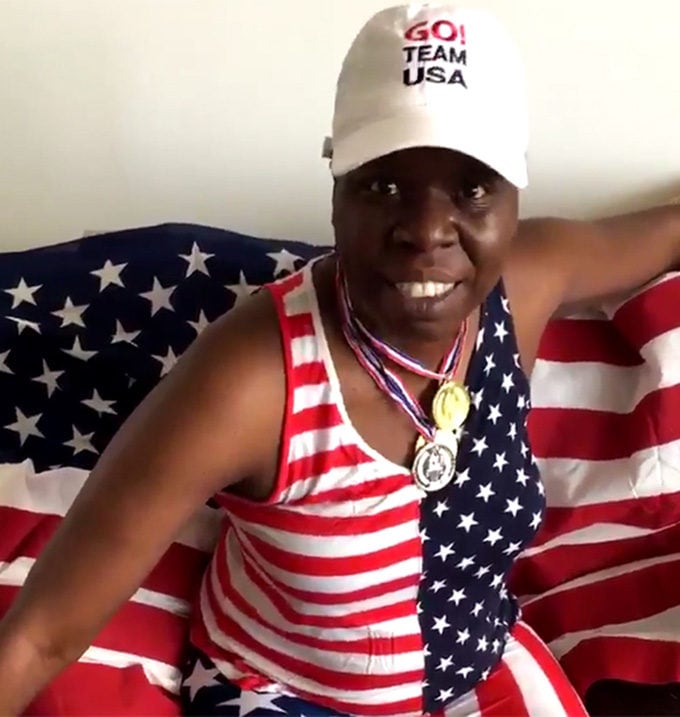 After comedian Leslie Jones started hilariously live-tweeting the Olympics from her sofa, she was invited to be an official NBC commentator. (“Guess who’s going to Rio?” she cooed.) She will be live on-air on Friday. Yes! 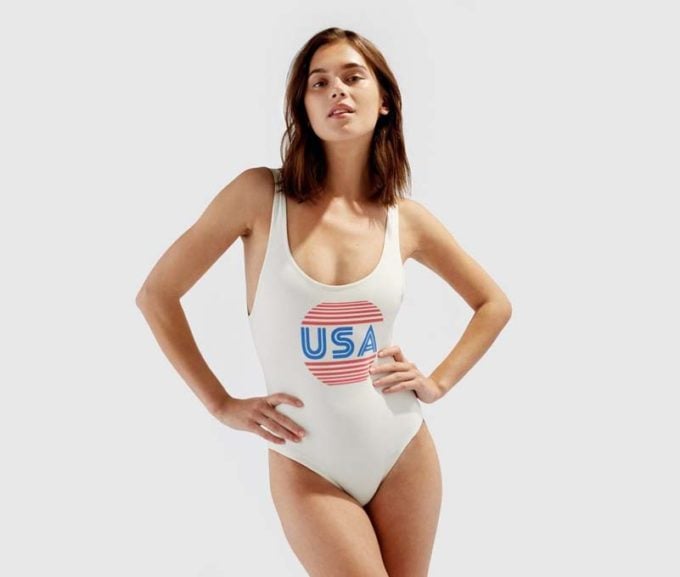 How pretty are these patriotic swimsuits, featuring six countries?

Have you been watching? The full competition schedule is here.

Have you see synchronized swimming lately?? WoW!! It’s amazing. I always used to think it was pretty silly, but it’s become incredibly jawdroppingly amazing. Sort of like seeing the best ever Cirque De Soleil routine.
Watch this!
http://www.nbcolympics.com/video/russias-mermaid-synchronized-duet-program-gets-top-score

With all of the controversy surrounding Rio I tuned out when the Olympics first started airing. But after a weekend with my family (they’re all obsessed) I realized how incredible it is that these athletes are competing for pure love of the sport. How many people work that hard at anything anymore unless there’s a cash prize at the end of that journey? It’s amazing to watch and now I’m a total convert.

‘Amanar’ in the ‘Amanar vault’ is actually the name of the Romanian gymnast who first performed the jump described.

omg that cat is so cute! I haven’t really been watching the olympics but this is a nice recap
xo
http://www.laurajaneatelier.com

Calling her the best gymnast in history is a gross exaggeration considering past performances which exceeded hers. She was indeed the best in this competition and therefore the best in the world at this moment. But let us not exaggerate her merits.

Many other gymnasts, including gold medalists Nastia Luken and Mary Lou Retain, have said she’s the best of all time. She’s certainly now the most decorated, is the reigning three time world champion, and could leave the Olympics with three more gold medals than what she has already earned. That doesn’t seem like a gross exaggeration to me!

@Kat If you base your statement on the claims of two gymnasts and upon a count of medals, not on skill compared throughout time, then fine, it is not an exaggeration. But I am sure this conversation is pointless because the American mentality of “we are the best in the entire world forever” will never give way to realism, decency and decorum in the claims that are being made.

What about the first transgender athlete to compete in the Olympics Chris Mosier!!!

The video of Aly Raisman’s parents was just amazing. Just the embodiment of what I’m sure all olympic parents are feeling.

I also loved watching Simone Manuel’s amazing swim to tie for gold in the 100 meter freestyle!

Aly’s parents are adorable lol. If I were them, I’d be just as nervous too.

I’m loving every bit of this, but I have special heart eyes emoji for the poster of the different athletes and their drastically different bodyshapes and sizes. Also heart eye emojis for Hernandez who is amazing and has the best heart eyes. Also, obviously the two Simones who made me cry. Also Leslie Jones…. OK Can’t pick…HEART EYES FOR EVERYONE!!!

Gosh…those parents…that IS a sport of its own. When you area parent that’s a hazardous sport.

Yes! I love Leslie Jones. I can’t wait to watch her commentary. Speaking of gymnastics, ‘m getting upset reading all the shade that is getting thrown Gabby Douglas’ way. Leave the girl alone!

Thanks for always posting fun stuff. Ladies, your blog makes getting up at 5am not so miserable!

So funny – I was getting my nails done the other night and Leslie was sitting right next to me. . . . getting Red/White/Blue nails. . . .of course. I didn’t put 2 and 2 together that it was for the Olympics, but now it all makes sense!

That is so awesome. She’s amazingly funny.

I am obsessed with the gymnastics too, partly because my mom was, so that’s what we watched most growing up! I am so thrilled and impressed by the USA team as a whole and their massive winning margin! Simone, Aly, and Laurie are such a JOY to watch!

Who else is mesmerised by the indoor cycling?? I’m in awe of them! (and catching up in Europe the next day on each night’s events…I get so teary! Not even just for my country, but for everyone!!)

I think the accidental censorship of olympic divers is the best thing to come out of Rio so far!

I’m full-on obsessed with Olympic gymnastics this year. Those two gifs of Laurie Hernandez (when she winks at the judges, and when she says “I got this”) are just the greatest.

Swimming is my favourite (that was my sport). I am Canadian and we are all going wild for penny oleksiak. She is 16, has 4 medals to her name, tons of personal bests on the way to those medals and she is the sweetest, humble girl. And her whole family is there cheering with enthusiasm

I lived in Canada for 8 years or so, and have been following her closely (as has half of my facebook feed). She’s amazing!

I love everything about this post! Go team USA. I’m all about the Olympics right now!

So proud of them all and simone i wish her well. The parents are so funny. I also loved tge young people playing and winning without a sweat. The ping pong match against Singapore and Japan with awesome and the archery against I think it’s Belgium and Chile was awesome too because the Chilean boy was only sixteen and he beats the team. I love watching the not so ordinary things in the Olympics. They all work hard.

Simone is an inspiration. All those girls are!

I’ve been completely hooked on the last few days, I love all the story lines and being able to watch sports that aren’t usually broadcast.

The parents always make me teary! I can’t imagine the emotion, and how proud they must feel. Ah! I can’t even get into or I’ll cry :)

My 6 year old daughter has been taking gymnastics and told us the other day at dinner she wanted to be an Olympian. I was kind of speechless for a moment, imagining that it’s a real possibility if she keeps up with her training. The she said, “I’ll eat lots of healthy foods, practice, run outside, not drink beer….” My husband and I were dying!!!! Watch for Grace Shovlin in the future olympics!

Tara and Johnny! #1 fun thing about the Olympic on my list.