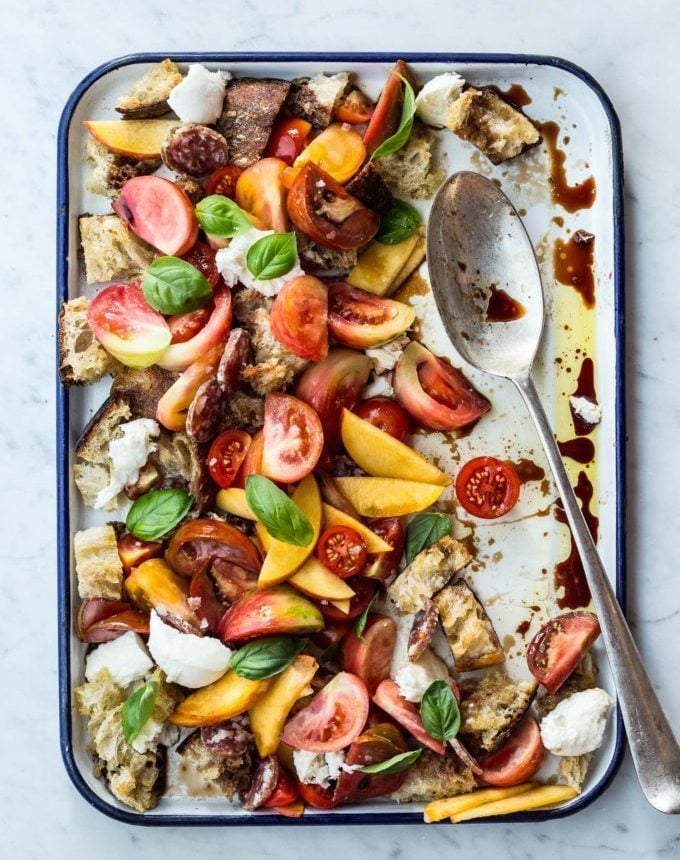 What’s the easiest way to make a salad more delicious? You guessed it: bread. So today, as we continue our month of tomatoes, we’re sharing a beautiful panzanella salad recipe from Ashley Marti of Local Haven. With juicy peaches, fresh mozzarella, heirloom tomatoes and dried salami, it strikes the perfect balance of sweet and salty. Here’s how to make it…

I often turn to this panzanella recipe for dinners and lunches. I adapt it with whatever is fresh in my kitchen. This recipe would also taste great with red onion, capers, greek olives and plums (instead of peaches). This dish is crunchy and vinegary. You’ll want to eat it straight out of the pan. 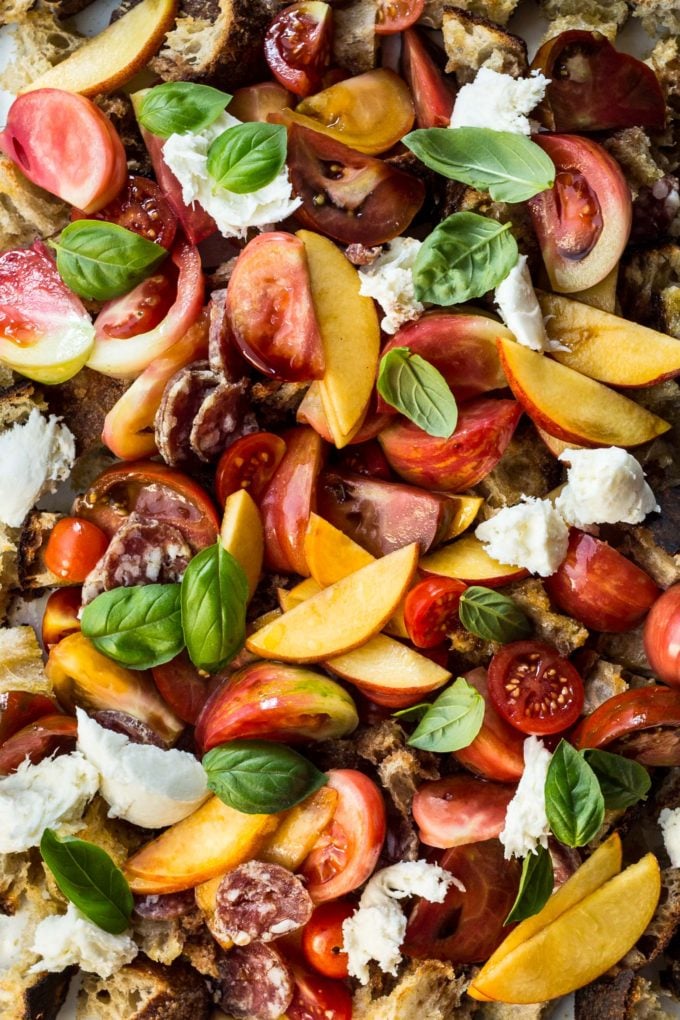 Preheat the oven to 425F. Toss together the bread cubes with 2 tablespoons olive oil, a pinch of salt and pepper. Lay them out evenly and place in the oven until crisp, about 7-10 minutes. Remove the bread cubes from the oven and allow to cool.

In a large bowl, toss together the peaches, large tomatoes cut into wedges, the cherry tomatoes, salami, basil and 2 tablespoons of olive oil. Add a pinch of salt and pepper.

Once the bread has cooled, toss together (on the baking sheet or in the large bowl), the bread with the tomato peach mixture. Add the balsamic vinegar and toss together thoroughly, allowing the bread to absorb the juices. Top with a drizzle of really good olive oil, fresh mozzarella, a little more basil and a pinch of flaky salt. 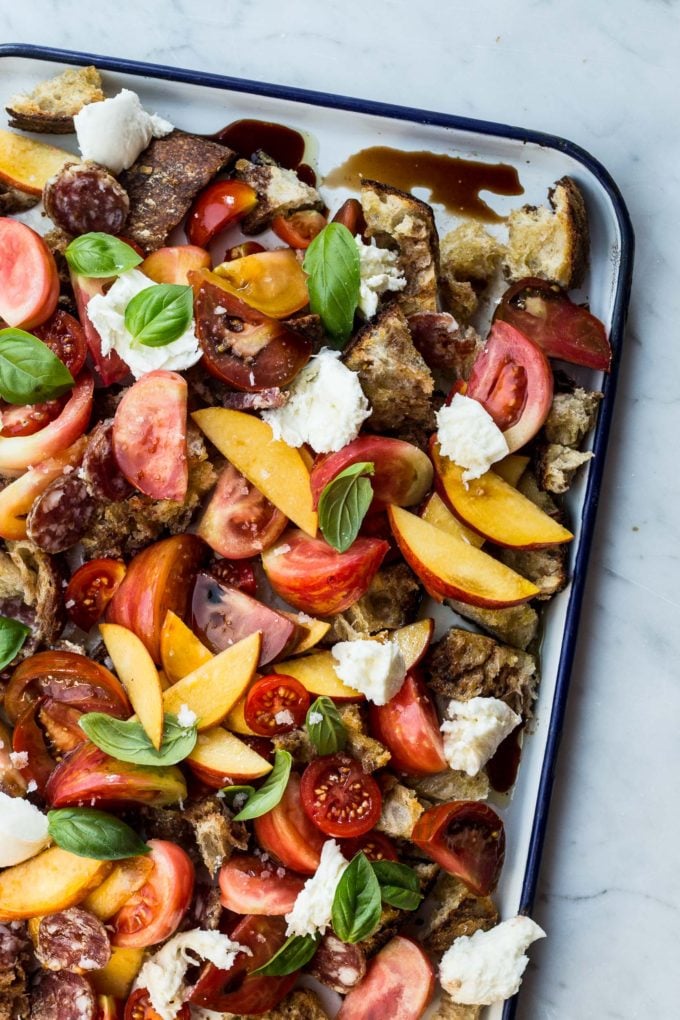 Thank you so much, Ashley!

(Recipe and photos by Ashley Marti. Thanks to Stella Blackmon for helping with this series.)

Wow! This sounds amazing! I had never heard of panzanellas before and I feel like I’ve just been invited into *cue Disney music* … a whole new world! Thank you for sharing :)

I made this last night using nearly all ingredients from our local farmers market! My husband loooved it, because he said it included all of his favorite things (literally the most particular eater I’ve ever met). I had a rough time personally with some of the combinations being a bit foreign (peaches and tomatoes, etc), but it was great to pick at throughout the night and there were zero leftovers!

I’ve been making this in sandwich form all summer! It’s perfect on toasted chibatta bread with a layer of goat cheese instead of the mozzarella (or honey goat cheese, like I made it with tonight!). I always drizzle the balsamic onto the top layer of bread so it doesn’t get too messy!

I just made this. I COULD NOT STOP eating it. Just the two of us for dinner. So, so good. Insanely easy. Thank you!

Such a fan of peaches in an otherwise savoury dish. Will be trying this when the Australian summer rolls around!

Yum! Can’t wait to try this!

I mean, I think you are stalking my house. I’ve been making this at least once a week this summer, and serving on that exact same white+blue pan. So good and so pretty!

Made it for lunch, and YUM! Light and summery. I even considered licking the bowl;)

WOW i love that pan! Can you tell us where its from? Thank you xo

This looks so good, I love that it has peaches
xo
http://www.laurajaneatelier.com

This looks gorgeous and delicious! I love panzanella salads and the peaches in this one makes it perfect for summer. My twin girls love prosciutto so I think I’ll swap it in for the salami. Thanks so much for sharing.

This looks delicious! I love peach and I love tomato, but I’ve never thought of putting them in the same dish!

This looks delicious (minus the salami for us veggies). Thanks for sharing.

Yummmmmay thank you, off to make now (not really, but I wish)

Ah this recipe came in perfect timing! I already have a ripe peach, a crusty 2 day old baguette and am about to head to the farmers market… now I’ll make sure to be on the lookout for cheese :) Panzanella salads are the yummiest. Thanks!

I’ve never made a salad with bread, but this looks intriguing. I love the idea of fruit together with salami. I am looking forward to trying this!

Another way to do this is to make a French-style “composed” salad. We do a bed of lettuce, then top with tomatoes, peaches/nectarines, slices of onions, chunks of cheese, slices of hard sausage and ham, slices of avocado…whatever we have. It’s all arranged artfully atop the lettuce, then dressed with salt, pepper, olive oil and red wine vinegar. Served with hearty bread (to soak up the dressing!) it’s a perfect meal for a hot summer evening. For some reason, making it pretty makes it taste better.