A Daybed of One’s Own 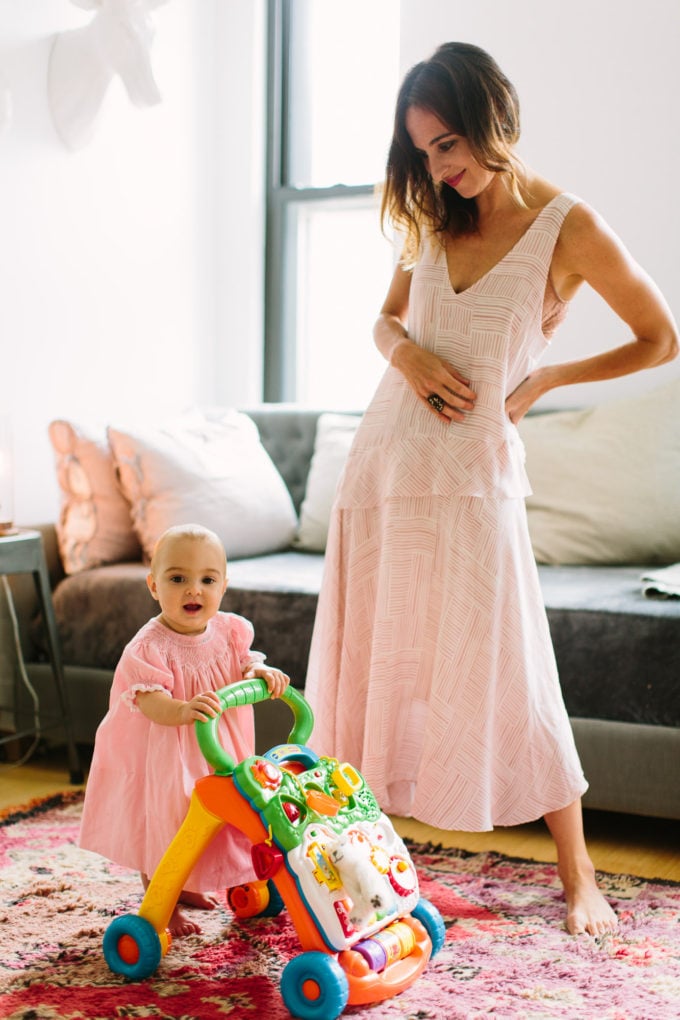 Writer and editor Alyssa Shelasky lives in a one-bedroom Brooklyn apartment with her 10-month-old daughter, Hazel. Until recently, they shared her small nursery at night. But, as a single mom with a new romantic relationship and an increasingly independent toddler, she had to make a change. Here’s her story of how a velvety piece of furniture changed everything…

I’m a relatively calm person. I value composure. I’ve often contemplated getting a small tattoo that reads: Courage is grace under pressure.

Sure, some things stress me out: chopsticks; aggressive air conditioning; love and marriage; that I’ll never read Just Kids for the first time again; all the hardcore serious suffering happening in the world every single day; decaf drinkers.

One thing that arguably should have stressed me out? Having a baby on my own. Did it? Not really.

That’s not to say I didn’t think deeply about the single-mother-by-choice choice. At 36.5 years old, after a rough breakup in Rome that knocked me off my feet (and then straight back to Brooklyn), I knew two things were true: I was seriously romantically burnt out and all I really wanted was to become a mom anyway.

Around that time, I contacted two women – friends of friends – both embarking on the sperm donor journey. Over coffees and croissants, I inhaled their stories separately. I took feverish notes. They were both so beautiful and badass. It didn’t take long for the donor decision to feel blazingly right for me. My family and friends unanimously agreed. And a few months later, once I learned that the IUI procedure worked (holy shit!), I never flinched. I never looked back. Not once. Not ever.

But back to my so-called inner grace. I remained calm when I brought my daughter, Hazel Delilah Shelasky, home one month early, a little small — determined to grow her ferociously in the October sun. Breastfeeding was excruciating, but I tried to stay composed. And while my family helped me every single day, at night I was alone. For about 300 nights straight, I was alone.

I’m not saying any of this for applause – millions of moms have it harder — I’m just trying to make it clear that freaking out is not my nature; that I can knock myself up, have an emergency C-section and survive on Kind Bars and kinder people for 8 months straight.

But when I decided to move out of my daughter’s bedroom and into the living room, now that almost ruined me.

I live in a one-bedroom apartment. From day one, Hazel and I shared a room and often a bed. Until she was five months old, she barely touched her crib. At six months, with guidance from our pediatrician, I “lightly” sleep trained her. It kind-of worked, but just like her mama, she’s an extremely light sleeper. We continued to wake each other up several times a night.

The reality is, Hazel is bursting with love for friends, neighbors, country music, the subway, the bus, brunch and bejeweled human beings, but sleep? Not so much. It’s just not her thing. So, I gave up on it, too. Which was okay; I had everything else. (Although on more than one occasion I did google, “Can you die from no sleep?”)

Then, a few months ago, I started dating someone I really liked. (And still do!) At night, we needed our privacy. This — combined with our collective, ongoing sleep issues — left Hazel and me with no other option: I had to move out of the nursery. It was time! It was time. I would have to sleep in the living room. So, I devised a plan.

The answer came in the form of a daybed, specifically the Devyn daybed from Restoration Hardware, which I had an instant online crush on. I proceeded to obsess about ordering this daybed for 30 days straight. I measured and re-measured. I made frenemies with fabric swatches. I stalked my dear designer neighbor, Sasha Berlin, even as she went into labor. Seriously, it was easier for me to buy magical sperm than this hunk of tufted velvet.

The daybed decision made me nuts. For the first time in the history of being Hazel’s mom, I felt fragile. Should I or shouldn’t I? Will I or won’t I? WTF is wrong with me?!

What I realize now is that I was using the daybed as a crutch for something else. Since the day she was born — no, the day I made the life-changing decision to (at least try to) have her alone it was mama and kiddo forever. The two of us against the world. I would have Hazel’s back until the day I died, and even after that. So, how could I leave her?

The reality was, life with Hazel — whose every breath, giggle and grunt I knew by heart, and who woke up seven times a night by laughing, not even crying! – was evolving. As it should! Her needs were shifting, my needs were shifting, our needs were shifting. And that’s gorgeous! Our little duo was makin’ moves. I was no longer a new single mama wandering around in the dark. I was a mother with a plan that would better my family.

So, I leaned in to the changes. I ordered the daybed. I ordered a twin-size mattress online. I ordered pillows and sheets, so that I’d have a sophisticated couch by day — and a super comfy bed by night.

Everything arrived a week later. Hazel, my peasant-dress-wearing, clementine-loving, happy-go-lucky extrovert, had a field day with all the friendly delivery guys. Her smile was so big, I honestly thought her face might break. Immediately, we delighted in her own new room. It felt sweet, whimsy and airy without the clutter of my bulky mattress and alpaca throws.

Still, as I said goodnight to her that first evening, I couldn’t help but tear up while walking away. I already missed her. But I lit a candle. I poured some Tempranillo wine. I curled up to my friend Julia Turshen’s new cookbook, Small Victories. I texted my guy to come over and see if we fit together on the daybed. Sure enough, it felt nice and adult.

By the end of the week, both Hazel and I were getting deep, healthy sleep – which was really the only thing that mattered.

Maybe it has something to do with the pleasure of having her own space, or the newfound touch of independence, but these days Hazel is more luminous than ever. And the restoration of my hardware feels quite triumphant.

I am calm again, although the greatest thing I learned is that I don’t have to be so tough – that a “never let ’em see ya sweat” ethos is a lost cause in this sappy love song called motherhood.

But tonight, I’ll sleep just fine. Hopefully, I’ll dream. After all, they do come true. 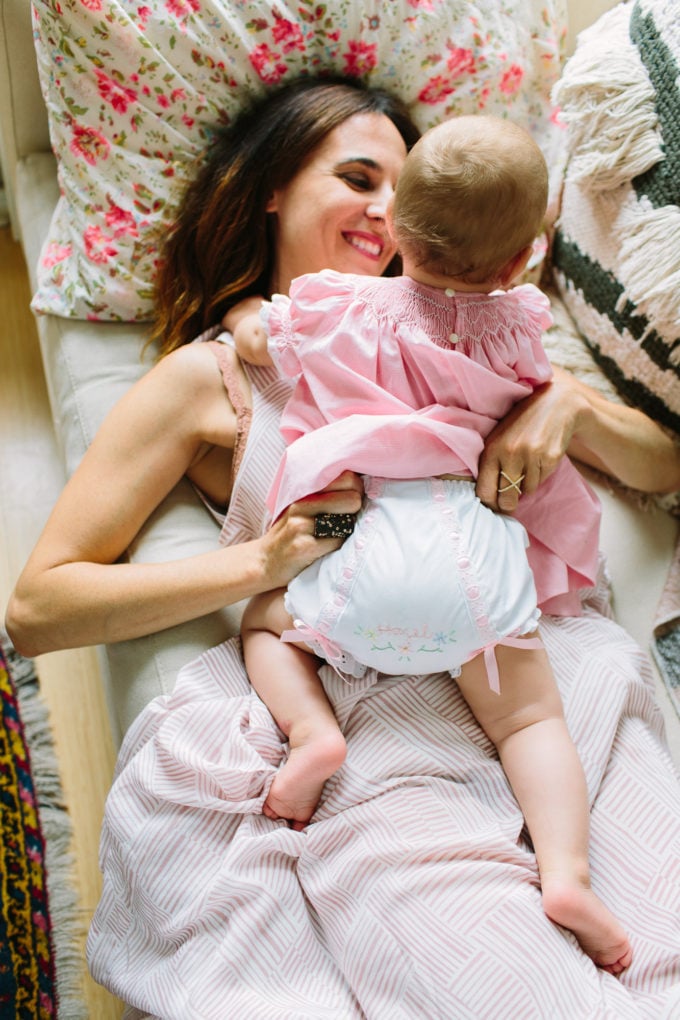 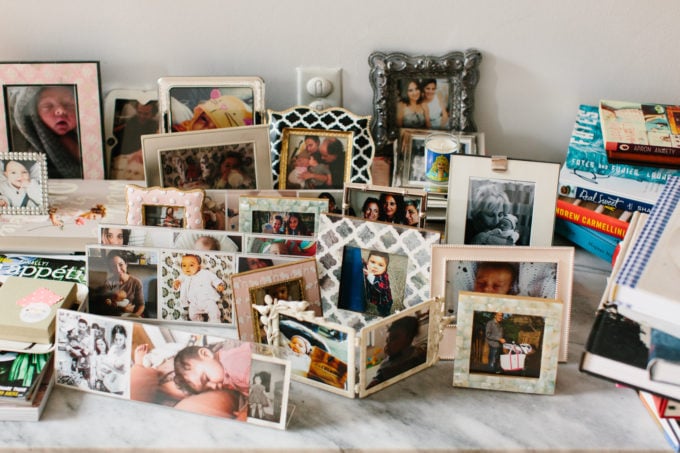 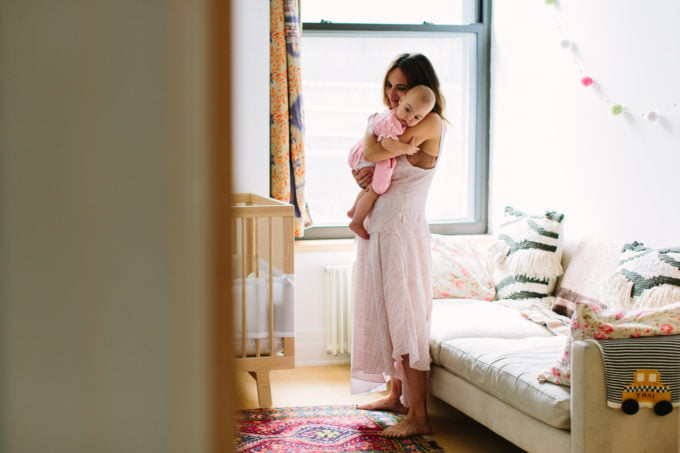 Alyssa Shelasky has contributed to New York Magazine, Conde Nast Traveler, Cosmo and Self. She is also the author of Apron Anxiety: My Messy Affairs In & Out of the Kitchen.

P.S. My motherhood mantra and a quote about single parenthood.

(Photos by Christine Han for Cup of Jo. Alyssa’s dress by Morgan Carper.)

124 COMMENTS
WRITE A COMMENT
Motherhood
most popular
01
21 Completely Subjective Rules for Raising Teenage Boys
02
Best of: Parenting Around the World
03
Trying Out Slow Parenting
04
How Did You Know You Were Ready to Have a Baby?
05
Three Transgender Kids Share Their Stories
Subscribe
Login
124 Comments
Inline Feedbacks
View all comments
Sam

Beautiful story. I’m a single mother also and relate to the “us against the world” dynamic.

I realise I am slow but I’m wondering if you’re happy with the daybed for both sleeping and lounging on?
I’m considering getting one shipped to Australia, which is pricey, but I can’t find anything over here anywhere near as nice as the one you have.
Beautiful story too.
Thanks :)

Can you please share where I can find the fringe pillows?

Hi! They are so old I can barely remember, but I blv Anthropologie!

so so sweet. thank you for sharing, I really enjoyed your humor. My fav line: “I’m just trying to make it clear that freaking out is not my nature; that I can knock myself up, have an emergency C-section and survive on Kind Bars and kinder people for 8 months straight”. fantastic!

Brought tears to my eyes. Oh, the joys and hardships of motherhood! Is there anything more beautiful?

A wonderfully sweet and simple story of motherhood.

I absolutely loved this piece. Thank you for sharing.

i read every post, but rarely comment… BUT! But. This is so beautiful, I’ve read it twice through. Beautiful writing, poetic. It’s a beautiful compliment to the personal tone and genuine writing that is the great hallmark of this site, for me. Three Cheers!! Thank you for being such a bright spot in the interwebs, for lovely voices and stories like this.

This story touched me so much! I’m a sperm-donor daughter, my mom had me when she was 36. When I was still a baby, she then found me a dad (as she once put it!) and they’ve been very happily married since I was 4. When it occurred to me that other kids hadn’t also been the flower girls at their parents weddings, and that something was different, she explained it by telling me that she wanted to have me so much, she couldn’t wait for anyone else! My mom and I will forever be soulmates in an indescribable way. Such a deep love, but it’s so rarely talked about, so it warmed my heart to read about it! So much power to you, Alyssa and Hazel!

After over a decade of writing on the internet, this is the best comment I ever read. I’ll never forget it. Thank you so much Kat! Love, Alyssa (and Hazel!)

Oh man, I loved this piece; having recently become a single mum to a three and a four year old (my husband left us) the below line really resonated with me…

“The two of us against the world. I would have Hazel’s back until the day I died, and even after that. So, how could I leave her?”

I can echo that sentiment with every single part of who I am (‘cept multiply it by two), it’s just the three of us against the world now and I will always have their backs!

I love the beautiful stories you guys produce; please keep doing it!

I love how fast I read this! Like breezing through her story feeling happy while doing so! I need her writing in my life!

Of the many beautiful things I’ve read in A Cup of Jo, this is one of the most gorgeous! <3

Thank you for sharing such beautiful motherhood stories. I love the google search “can you die from no sleep”…I hear ya!
P.S. where is Alyssa’s amazing dress from?

Oh boy, this is beautiful.

Thank you Alyssa and Cup of Jo–as another 36.5 year old who just went through a massive break up, and who was considering doing the single mom thing even before the break up–I really appreciated this. Seeing Alyssa’s success story, and her beautiful daughter and space, makes me more confident that I could do the same thing.

you totally could! sending so much strength and love as you consider this decision! xo

it’s the grey daybed in the top photo, thank you!

That is a really, really beautiful story! Thanks for sharing! You always post the best stuff Jo! (+team Lexi, etc!)

Can we just have more pictures of Hazel bc she is SO FRACKIN’ CUTE!

What a cute little article, the apartment looks so cozy
xo
http://www.laurajaneatelier.com

That is a beautiful daybed and its so true sometimes the right piece of furniture makes a huge difference to life.

Such a sweet story!