What Music Do You Play for Your Kids? 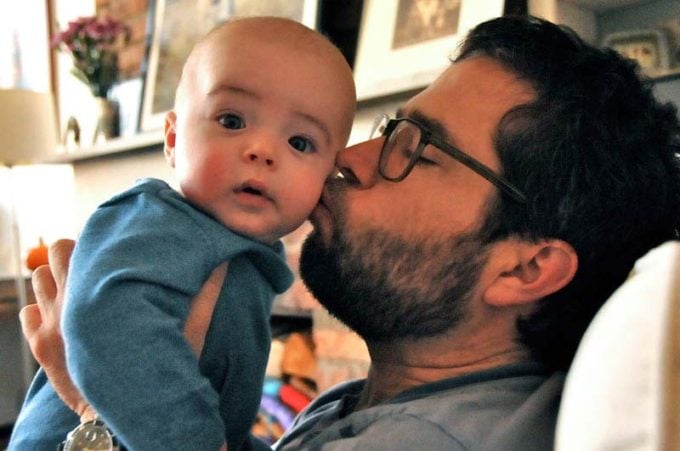 As a first-time father, I had a lot of things on my mind the night Joanna and I brought Toby home from the hospital six years ago: How do I hold his delicate body so he feels safe and comfortable? How many hours will he sleep? And, of course, how am I going to keep this precious creature alive through the night? I was so new to this!

Even given all that new-dad anxiety, though, there was one question I felt could not wait even until Night 2: What would be the first notes of music he would ever hear? I took the question seriously. As a music lover who had grown up listening to my dad’s old records (pretty much everything from Johnny Cash to Beethoven), I considered music to be the ultimate welcome-to-earth present that a father could give his child. It would be, I hoped, something we would always share.

So, with Joanna catching a few hours of sleep in the bedroom, and Toby in his baby seat staring up at me with those newborn eyes, I dialed up Penny Lane by the Beatles on my iTunes and let it flow over his new ears. I’m not sure if it meant anything to him, but it meant a lot to me.

And after six years, turning Toby on to music has been one of the great joys of fatherhood. Since Toby was two, we’ve spent hours listening to music alone, loud, usually when Joanna is out of the house. I keep a “Toby” playlist on my Spotify, and every time he hears a new song he likes, he nods in approval and says, like a grown-up, “Add that to my playlist.”

At first, I called the shots. I managed to steer him away from kids’ stuff like “Yankee Doodle” to sunny ’60s pop, like Herman Hermits’ No Milk Today, and eventually even to some contemporary club stuff like Daft Punk’s Get Lucky and Mark Ronson’s Bang Bang Bang. I figured I could continue to guide his tastes and he would like the stuff I liked. You know, the “chip off the old block” stuff.

By the time Toby was four, though, I started to realize, through our musical journeys, that there’s only so much you can do to influence your kids. They have minds of their own, and they have ears of their own, too. Thanks to Toby, the first song Anton ever heard on earth was Shake Your Booty, because that’s what Toby wanted to hear when we brought his little brother home from the hospital (sorry, Anton!).

Now, when Toby and Anton and I turn down the lights for a living room “dance party,” it’s Toby who is the DJ. I’m expected to follow his lead. He’ll call out “Happy!” (Pharrell Williams) or “All Star!” (Smash Mouth, via Shrek, naturally), and my job is to comply. The most I can do is gently nudge him. I mean, I turned him onto Belle & Sebastian years ago, and he now considers them the most danceable band since the Bee Gees. But even there, he likes totally different songs from the ones I once tried to force-feed him. His favorite song is the the haunting, ethereal, Waiting for the Moon to Rise. Try dancing to that one. Toby can.

Given what I’ve learned with Toby, I’m exercising a more hands-off approach with Anton, who is three years younger. I gave up on trying to make him my musical clone. So, now, I just follow his lead. If Anton wants to hear The Gummy Bear Song on an endless loop, that’s what we play.

So, imagine my surprise yesterday, when Anton and I were in the backseat of a cab on the way to a picnic. I took out my phone and told him he could watch any video he wanted.

He looked at me without hesitation: “Penny Lane!”

P.S. Eight confessions of a new dad, and Alex’s side of the birth story.

Tags: alex, music
171 COMMENTS
WRITE A COMMENT
Array ( )
Motherhood
most popular
01
21 Completely Subjective Rules for Raising Teenage Boys
02
Best of: Parenting Around the World
03
Trying Out Slow Parenting
04
How Did You Know You Were Ready to Have a Baby?
05
Three Transgender Kids Share Their Stories
May We Suggest…
By Alex Williams
Motherhood
8 Confessions of a New Dad
March 2, 2020

Our son was instantly calmed by Tragically Hip’s Fiddlers Green when he was under 1. I played it many times in the middle of the night for him and in the car. It was lovely! When he was around 1, we mistakingly played Baby Shark when he was inconsolable after a 6 hour drive and no nap (it worked!). Since then, he only wants kid music… Wheels on the Bus has been played on repeat for at least 6 months.

That video is amazingly cute!

This is a really sweet article and made me smile. :)

What a sweet dad story. And very relatable too. My husband too has the same idea with my 2 and 1/2 month old baby girl playing everything from bob Marley to punk rock and metal! All which he loves listening to. However for our bedtime ritual we have a playlist of healing and meditation music. I am definitely going to adopt Alex’s method of creating playlist on what her preferences are.

thank you so much for sharing Alex story! my husband loves all kind of music as Alex and hopes to teach our children one day what great music is. I even read this article to him out loud and he absolutely loved it and started to think of the first song he would play to our child :)

thank you so much for sharing!

Alex if you’re a man of your word, “We Didn’t Start the Fire” is on that Playlist.

With the exception of the Wiggles, my son never listened to “kid” music. I especially informed that rule in the car. He loved the Beatles and James Taylor as a baby and now, at 13 is into alt-rock like Panic At the Disco. #proudmom

Loved this! Sweet ending! For me my father’s taste in music kicked in much later in my life (after I turned 20). When I was a child, I was in love with only two things: Xuxa (children’s music in Brazil for everyone born around the 80’s/90’s) and classical music (I loved it from ballet classes and ended up loving to play piano too). Then I had my taste completely influenced by my older brother as he grew up, and kind of followed his lead (except for a metal phase I hade from 13-15, during which I hated Belle&Sebastian). I still do have a very similar taste to him, but I also let my father’s favorites in, and there’s always something on my playlists that remind me of him.

PS.: My brother’s son, though, is very much into Reggae music since he was born (only Bob Marley could make him stop crying), his 1st birthday was even reggae-themed haha. Nobody in the family loves reggae that much, and it has nothing to do with my brother’s taste in general, but anyway. You never know.

My music tastes are fairly diverse but I rarely lean towards country. However, an album Alex might appreciate is “A Sailor’s Guide to Earth” by Sturgill Simpson (alt/rock country). He wrote it as advice to his young son and it spans “welcome to earth” through teenage angst with a cover of Nirvana’s “In Bloom”. As far as kid’s music that the adults in our house absolutely love as well – look no farther that The Okee Dokee Brothers.

My 7-year-old daughter has loved the song “Keyleigh” by Marillion since she was 3. My 4-year-old son is more of a Dire Straights kind of guy. Yup, it’s pretty 80s in our house.

We love Alex! Can we please have a regular Alex Post on what he’s ‘listening to right now’!!! Please! ?

I loved reading this, and I love the balance you’ve established. My parents did exactly this but they didn’t realize it. My mom was 37 and my dad was 40 when I was born in 1982, and I was their only child, so I was kind of along for the “hanging with the grown-ups” ride. Musically, that meant that I listened to whatever they were listening to, and I grew up on a solid diet of Motown, early 60s do-wop, girl groups, the Four Seasons, British invasion stuff, a lot of 1970s country, and most importantly, The Beach Boys. But I definitely threw in my fair share of New Kids on the Block, and this absolutely horrible tape of Disney Silly Songs :D

Can you have Alex make spotify playlists for all of our kids – similar to the way you post about what books youre reading??? That would be so wonderful. My kids love music but i never know what to play…however lame that sounds. Too many options!

that’s such a great idea! thanks, meredith!

My 5 year-old really loves punk rock and heavy metal. He recently drew a picture of 3 people, and I said, “How cute – is that me, you, and Daddy?” He said, “No. It’s Motorhead.” He asked for his own Motorhead t-shirt and wants to wear it all the time. He also once asked someone in a record store, “Do you have any Bad Brains?” He recognized the Misfits logo in a bathroom stall. He asked me if he could wear no shirt like Iggy Pop. And he always asks me, “Can I spike my hair?”

Can Alex guest write more please? This was hilarious! Also – it was great to have a post I was able to sit and read with my husband – something he could relate to!!

i’ll ask him for sure! :) thank you so much xoxo

The beatles were on high rotate in this house in far away New Zealand also. Then my two boys worked their way through the eclectic (and large) cd collection. As they grew older we played a game on Sunday evenings where everyone played one track, taking turns to choose. We danced and cooked and ate together. happy days. Went on for years (they’re 19 and 22 now). I always played them old blues classics,then things like Abba to tease them. They played me pop and hip hop and dub step and all sorts of things I would never have heard otherwise. Their Dad made sure they had a steady diet of New Zealand music. Youngest son is now in LA, working on his second album. http://lontalius.com

Adore this video of sweet Toby and Anton! So precious! What song/artist is this?

it’s belle and sebastian, another favorite.

I have a 3yr old, and we play a wide variety of music for her. From Music Together songs to 80’s classics such as A-Ha’s “Take on me” which is her favorite song right now to the Ramones – fun and fast \m/

Aw. Penny Lane! This post is one of my favorites ever.

My 13month old daughter will only listen to Fleetwood Mac. She specifically prefers Stevie Nicks on lead vocals, God help you if you play Christine McVie or Lindsey Buckingham tunes. “Dreams” is her absolute favorite song. It will lull her into a dreamlike trance or put her to sleep soundly. I’m convinced there’s some kind of black magic afoot but I’m all for it.

This is simply too adorable. <3

This is such a sweet story. What a great way to bond with your children and share the things you love! You’ve inspired me to have living room dance parties with my kids!