Alex’s Side of the Birth Story 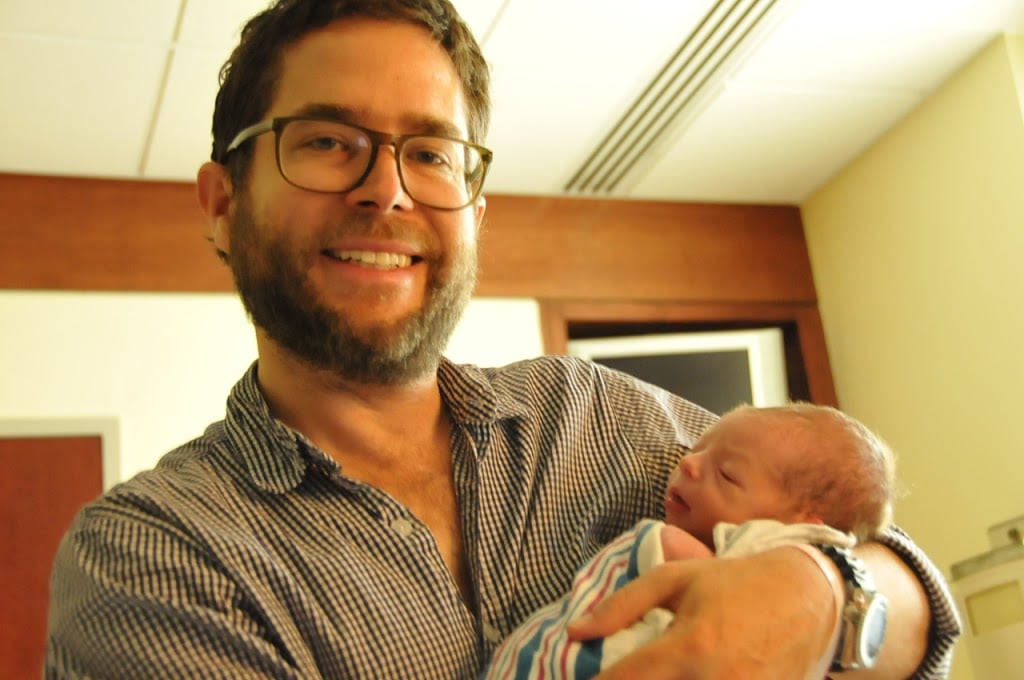 Now that it’s been more than a year since Toby’s birth, and our second wedding anniversary is around the corner, I thought I’d finally ask Alex to share his side of our birth story. I’m always really curious about what it’s like for dads, whether they’re coaching breathing, getting their hands tightly squeezed or pacing the waiting room. So, below, Alex shares his thoughts… :)

It was a Monday night, more than a week before Toby’s due date.

The day had been so ordinary: We had gone to the accountant, Joanna had done a Trader Joe’s shop, we went to work. We watched a TV show in the evening, and then I made a cup of hot cocoa. It seemed too regular of a day for us have a baby!

So, when Joanna started contracting, I felt, this is odd, surely she’s just having cramps, surely…

Joanna began having contractions in the living room, and, when they got stronger, we moved into the bedroom. I timed the contractions using my old dive watch. The clunky watch felt imprecise compared to a digital watch; I remember thinking, I hope I’m getting this right.

The birthing books say that you’re in labor once the contractions are consistently 3 to 5 minutes apart. I could tell that Joanna was being tough and stoic; she would tell me the contraction had started after she already looked like she was in pain; and then she would say, “It’s over,” and I would think, you don’t look like it’s over! She would still be wincing. I started thinking the contractions were actually much longer and closer together than she realized.

Deciding whether to go to the hospital

After a couple hours, her contractions were intense. I thought, OK, it’s 1am, we have to fish or cut bait. Joanna was being courageous and downplaying her pain, and the doctor answering the phone was being wishy-washy—so I felt like it was up to me to make a call…but I didn’t really know, because what my instinct was telling me (this is it!) was different from what Joanna and the doctor were telling me (this probably isn’t).

I had expected it to be like, oh, it’s time, like a fireman going down a pole. Instead we basically had to decide whether to go into the hospital, which was weird. We decided this was probably it. We called the doctor and he said, ok, come in.

The big events in life never feel like you expect them to. When the moment is majestic, you expect that the heavens will open up, and the trumpets will start playing, but really your wife is lying on the bed with a roll of toilet paper and you’re trying to figure out if you should keep making that cup of hot chocolate that you were making. No matter how magical the situation, you’re still thrust back into these mundane life details: how to catch a cab in NYC in the middle of the night, I’ll carry the bag, should we take some snacks. It’s funny how you normalize it. 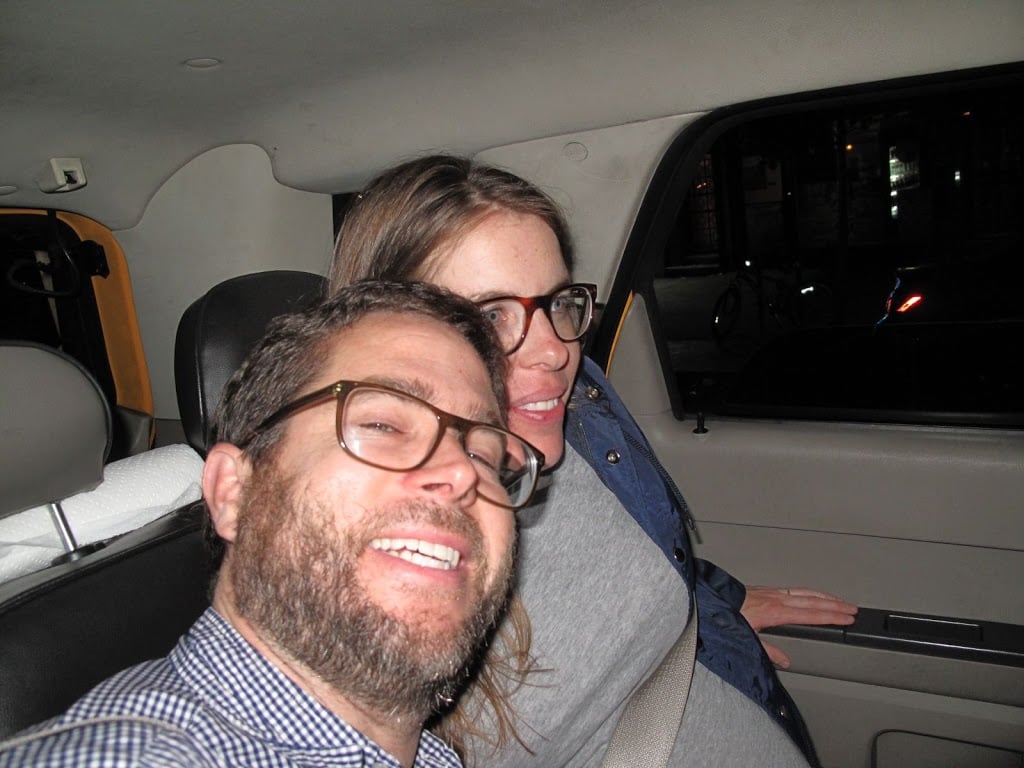 Once we got into the cab, the adventure kicked in. It was Joanna and me together, it was a dark quiet night, and the emotions started flowing. And I started thinking, holy shit!

It was the middle of the night—Tuesday at 2:30am—the deadest possible time to be driving through Manhattan. Like a zombie movie when everyone has disappeared.

We were also both trying to take pictures, which was a joke because it was dark in the cab, and Joanna really wasn’t in the mood to have her picture taken! I was crazy excited.

Once we arrived at the hospital, there was this long beaurocratic hospital check-in—Joanna was in pain and anxious, and, honestly, the triage doctor was being a jerk. I remember jumping up, thinking, I have to make sure she gets seen fast, but I was beating my head against a wall dealing with hospital paperwork.

You kind of want to grab the doctors by the shoulders and think, don’t you understand, my wife is in pain? Look at her—she was sitting on a plastic chair in the waiting room gripping the arm of the chair with her eyes closed, really in pain.

It was a big relief when they told us the labor was real. The nurse said, “You’re going to deliver your baby today.” What a thrill! I wanted to make sure Joanna got all the support and food and drink that she needed.

Trying to be useful

Once we got to our delivery room, my first impression was that it was really comforting and mellow: big with cream and dark green walls. I knew Joanna would feel more comfortable here. A giant Lay-Z-Boy recliner was in the corner, and I was like, that’s got my name on it.

At that point, there wasn’t much I could do, but I really wanted to do something. It’s like that old joke, where the midwives would tell the husband, “Quick, go boil some water!” just so he’d feel useful and stay out of the way. Joanna was obviously in great medical hands. I was right there for her, but she was concentrating on her contractions in the hospital bed. She was really cool, calm and tough.

The weeks leading up to the due date, you have the sense of preparing to go to war; you have to prepare your kit, your tools, get everything in order. I had packed Joanna’s nightgown, two cameras, nuts in case I got hungry. I even had music and DVDs, like we needed any of that.

Around 7am, Joanna decided to opt for an epidural. Right afterward, Joanna was totally painfree. We talked for a while and then lay together; I even fell asleep for a while. We both felt calm. I thought, ahhhh, it’ll be easy going from here.

We were surprised when, in relatively short order, Joanna started feeling lots of back pain. I kept going out and saying to the nurses, I know she’s not supposed to be feeling anything, but she really is. I had that conversation with them like three times. They were giving me that we’re-really-nice-but-we’re-getting-annoyed-at-you kind of vibe!

Finally the doctor came in and realized that it was back labor. There was nothing they could do. I fed Joanna ice chips and put a cold washcloth on her forehead during each contraction. She would say, “Now, now!” and I was fast as lightning with that washcloth.

A couple hours later—although it felt like five minutes—Joanna said she felt the urge to push. We thought that maybe we should call for the doctor again. So a new doctor came in to check everything out; she was super competent and amazing. She reminded me of an NCAA women’s basketball coach.

Then, all of a sudden, she announced it was time—and it was ON!

The doctor put on this crazy moon suit. It really did look like a deep sea diver’s outfit, bizarre. Everything happened so quickly. I was holding up one of Joanna’s legs, and a nurse was holding the other. Joanna was pushing hard every minute or so, and it was amazing.

Then I was seeing the crown of Toby’s head. The doctor and I were like, Go! Go! Push, Joanna! And it felt like such a rah, rah, sports event all of a sudden. Usually a doctor’s bedside manner is really calm and soothing, but she kept booming, “You do it, Joanna! You’re a strong girl!” She was really yelling in this coach-like way.

The most surreal moment I’ve ever had was when I saw the crown of Toby’s head. That’s when it REALLY became real. All the way up until that it seemed a little theoretical that we were going to have a child. But then you’re like, whoa, this is for real. And then you’re really having a sense of anticipation, you’re like, in two seconds, I’m going to meet this child that I’m going to know the rest of my life. Two seconds!

So, Joanna was pushing, and I saw the top of his head, and I’m like, oh, crazy, he has more hair than I expected and dark hair… At first it was taking forever…it was a magical moment…I was about to see the face of this person…Joanna was like, I can’t do it…and the doctor kept saying, push, Joanna, push…

It was more suspenseful than anything I’ve ever done. I was dying to see his face.

Joanna said again, I can’t do it…and the doctor was like, Do it, Joanna, push, push!!! And her rah rah spirit was crucial to the moment…And finally, Joanna pushed as hard as she could and Toby slipped right out!

Honestly, watching the birth looked like a Georgia O’Keeffe flower; now I understand those paintings. It’s like a flower opening up. It was amazing. I was so glad I got to be part of it. You really feel the awesome power of life and a women’s strength, your wife’s strength; it’s thrilling.

Also, to be honest, it was kind of like Alien.

The nurses are rushing around; they’re holding up the wet purple baby and saying, “Dad, cut the cord!” At the moment, I was like, oh, no, I can’t do that, but they basically insisted. So I cut through—it was basically like cutting calamari!

The second I saw Toby’s face, I was struck by how sweet he looked. I was under the impression that babies would come out really misshapen and funny looking, but I was bowled over by how beautiful he was.

The nurses handed him to Joanna first, of course, and she was glowing. I had the camera set on rapid fire, and doctor made a joke that it sounded like an AK-47. I probably took 300 pictures in the span of fifteen minutes.

Then nurses cleaned him, and then I held him. He was tiny and purple. It was literally the third time I’d held a baby in my whole life, and to think that it was my baby was thrilling. It was unbelievable—after all those years, wondering if I’d ever have a child, thinking it wouldn’t happen, thinking it probably wasn’t meant to be…and then here I was holding Toby. It was a profound moment, beyond description.

Then I handed Toby back to Joanna. She looked so beautiful, with this blissful, serene expression on her face. Relief, exhaustion and accomplishment all together. It must be what it’s like to be on top of Everest.

She looked beautiful. I was in awe of her. 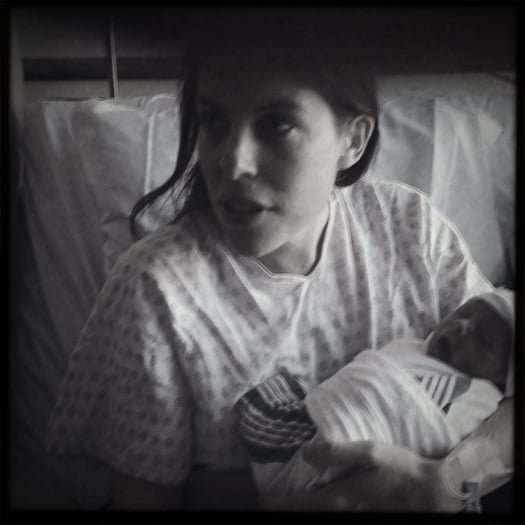 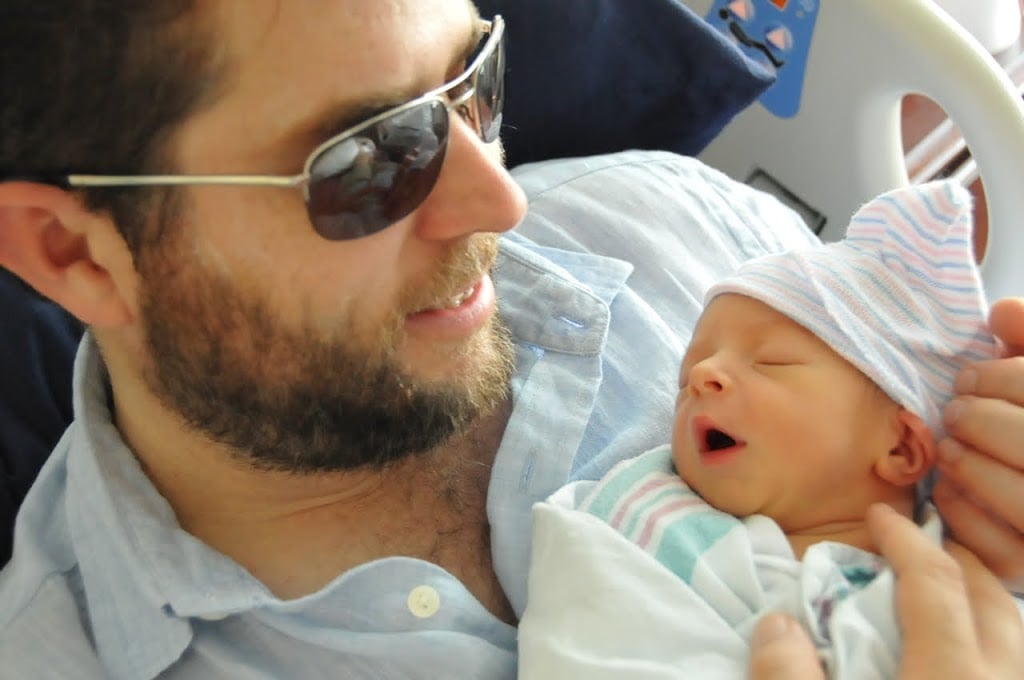 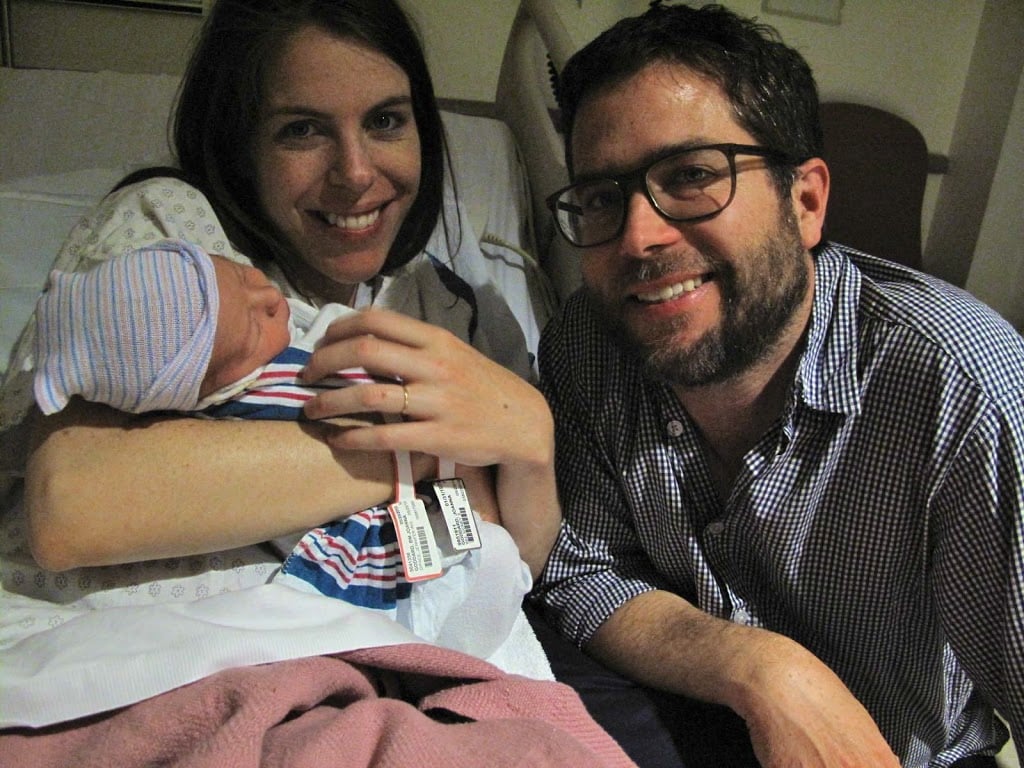 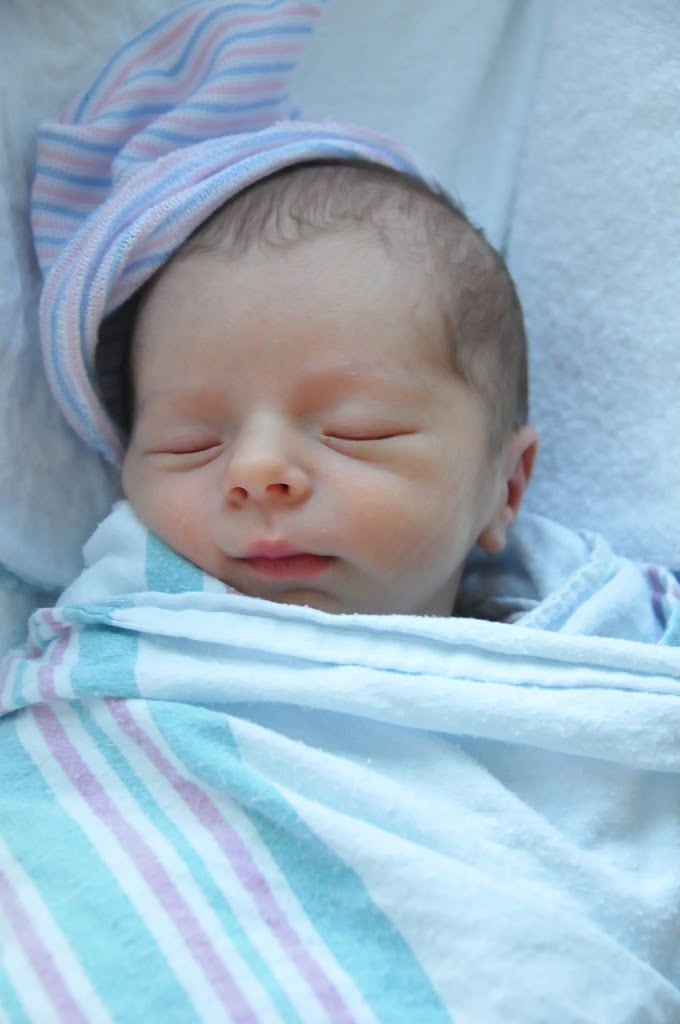 Thank you so much, Alex. (I found this so touching and eye-opening:) xoxo And I’d love to share more dads’ birth stories over the next few months.

Mamas, were your husbands or partners in the room with you? Did they coach you along? Would you prefer he or she stay by your head or by your feet? :)