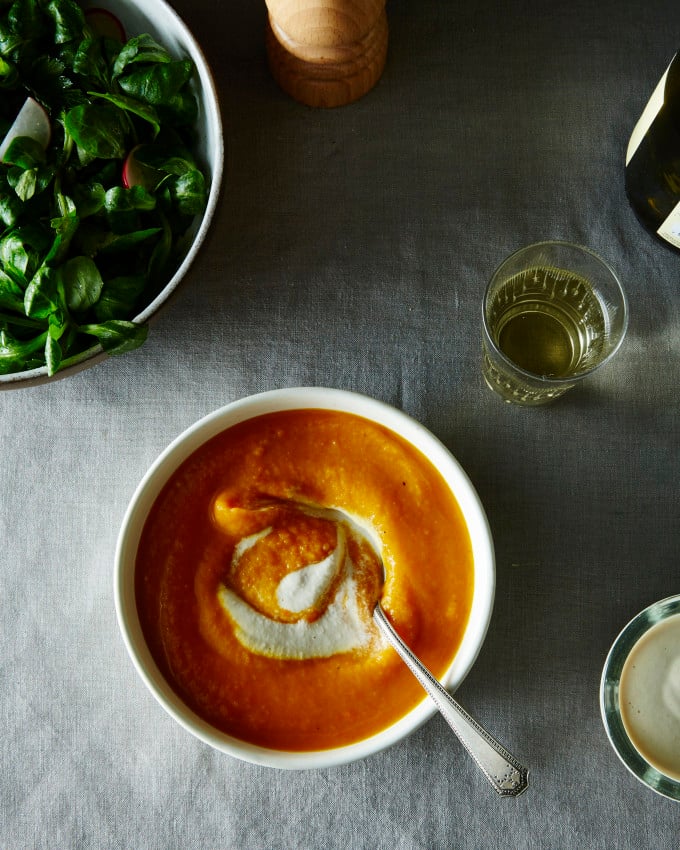 This month, we’re featuring recipes for easy meals — warm, satisfying lunches and dinners you can throw together as the days grow shorter. First up, this sweet and spicy soup from Food52’s beautiful new cookbook. This one will appeal to vegans, vegetarians and omnivores alike…

Carrots and ginger play a starring role in this sweet and spicy soup. The supporting cast includes potato for extra heft, cashew cream for a luscious mouthfeel, and a touch of curry powder for deeper, more complex flavor. Just one heads-up: although the cashew cream is super simple to prepare, the cashews must soak for at least three hours before making it, so plan accordingly. (The cashew cream can be made up to six days in advance.)

Heat the oil in a large pot over medium heat. Add the onion, celery and ginger and sauté until the onion is tender and translucent, about 8 minutes. Stir in the broth, carrots, potato and curry powder and bring to a boil. Decrease the heat to maintain a simmer. Cook, stirring occasionally, until the carrots are tender, about 25 minutes.

Using an immersion blender (or using a regular blender and working in batches), blend until completely smooth. Put the pot over low heat and cook, stirring often, until heated through. Stir in 1/3 cup of the cashew cream.

Top each bowl of bisque with a swirl of cashew cream before serving.

Cashew cream is a secret weapon of vegan cooking, supplying the creamy texture that many people fear they’ll miss in vegan cuisine. Use it in place of crème fraîche, sour cream or dairy cream; as a garnish; or as a component of baked goods, soups — including the Gingered Carrot Bisque — and pasta sauces. As is, it’s also a wonderful vegan béchamel sauce.

Put the cashews in a food processor or high-speed blender and pulse a few times to grind them up. Add the lemon juice and salt. With the motor running, drizzle in the water and process until completely smooth (which may take a few minutes), stopping occasionally to scrape down the sides of the work bowl or blender jar. Add more water for a thinner consistency, if desired; you may want it as thick as whipped cream or as thin as coconut milk, depending on how you plan to use it.

Stored in a covered container in the fridge, the cashew cream will keep for up to six days.

Thank you, Food52! Your new cookbook is beautiful.

(Recipe excerpted from Food52 Vegan, by Gena Hamshaw, with permission of Penguin Random House LLC. Photo by James Ransom. This series is edited by Caroline Donofrio.)

I made this and loved it! Since we didn’t have any cashews, I subbed the cashew milk with light coconut milk. I also added extra curry because I’m obsessed with curry. Next time I will roast the carrots in the oven for added depth of flavor.

This recipe is phenomenal! Silky, luxurious, spicy, savory…. Just stellar. I added three chopped garlic cloves and maybe a quarter teaspoon of dried chili flake to the initial vegetable sautee. Other than that, followed the recipe exactly and it came together as expected. Thanks so much.

To save time, you can simply boil/simmer the cashews on the stovetop in water for 10-15 minutes (or nuke ’em in water for awhile), rather than soak them for hours. They just need to be softened. I too would halve or quarter the cashew recipe since you only need 1/3 cup.

Very much looking forward to trying this…I gather them (recipes) like the proverbial stone gathering moss at this time of the year!!!! Thank you !

How beautiful is that soup?!

Oh my goodness, I’m obsessed with anything that relates to Autumn with those sweet and spicy tastes! This looks so good! Can’t wait to try :) x

While the soup looks delicious, given your love for Misty Copeland, I had to make sure you’ve seen this!! https://www.youtube.com/watch?v=5a4NPZamnZU

Loved Loved Loved it. Tried it out today because I happened to have all the ingredients at home. :) Even my 2 year old son had a couple of spoons. (we are having some eating-issues lately) <3

Have you guys done a post on The Soup Club Cook Book? Maybe you have and I missed it, if not check it out. Delicious recipes and an interesting group of women behind it.

I’m looking forward to trying this out. Though I will probably sub creme fraiche for the cashew cream. Clearly I’m not vegan but I can appreciate a well done vegan recipe. I love Gena’s Vegan Cornbread on Food 52 and make it often. I think it’ll pair well with the soup!

Sounds and looks lovely. I was wondering, can the cashew cream be frozen so that we don’t have to use it all up in six days?

What a beautiful recipe. It sounds like a keeper! I’ve heard only wonderful things about Gena’s new cookbook with Food52. On my wishlist, it goes!
xx Sydney

Is there a substitute for cashew cream? NUT based recipes are risky to serve at dinner parties. Nuts are a serious and deadly allergen!

Since cashew cream is used as a vegan replacement for sour cream, crème fraîche or cream, I would think any of those could substitute if you are not vegan!

Looks delicious Thanks for sharing :)

This look so delicious! Def will have to try, thanks for sharing!

Gena Hamshaw’s recipes are fantastic. Thanks for sharing this one!

Yum! Their cook book IS awesome. The braised lentils are also heavenly : )

Perfect for this time of year! I’m not vegan myself but my sister is vegetarian so this would be great for us to have together. Thanks!

YAY!! Thank you for the awesome vegan recipe! I will definitely try it!! More vegan recipies please!!