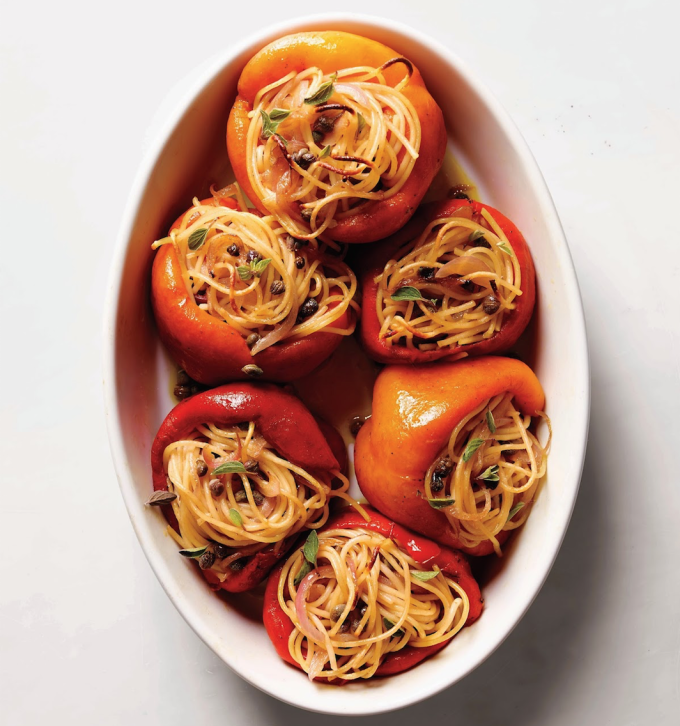 Do you usually eat your pasta in a bowl or on a plate? How about in a pepper? This week’s easy pasta recipe from Martha Stewart Living looks complicated, but it’s actually a cinch to put together. Here’s how…

Place bell peppers directly over the flame of a gas-stove burner and roast, turning with tongs, until blackened all over. (Or roast peppers under the broiler.) Transfer to a large bowl, cover with plastic wrap, and let stand 15 minutes. Peel off skins, slice off tops and remove ribs and seeds.

Preheat oven to 350F. Heat a large sauté pan over medium-high. Swirl in oil to coat, then add anchovies, breaking them up with the back of a spoon until dissolved. Add onion and capers and cook, stirring occasionally, just until onion is softened, about 3 minutes. Pour in vinegar and cook, stirring frequently, until almost evaporated. Add pasta and toss to coat.

Generously season cavity of each pepper with salt, then fill with a heaping 1/2 cup pasta mixture, twirling pasta with a fork to fit snugly. Place peppers side by side in a two-quart oval baking dish. Bake until pasta starts to brown in a few spots, 10 to 15 minutes. Let cool slightly before serving, topped with oregano.

(Photo by Johnny Miller. Recipe courtesy of Martha Stewart Living; the May issue is now on stands. Thanks to Caroline Donofrio for her help with this series.)

The flavor was tasty, but needed a little tweaking. This was VERY labor intensive. It took 75 min from beginning of prep to table. I’ll make again, but I’ll not roast the peppers over the gas stove flame…it was a pain and peeling peppers is difficult. I’ll stuff peppers with mixture and put an inch of water in the baking dish. I’ll also increase the anchovies from to to 4.

sounds delicious!!! Such a great combination

Scrumptious! I had never heard of Stuffed Peppers before moving to the US last year (I’m from New Zealand), and now I’m addicted.. thanks for this recipe!

Im usually a silent reader but this is the first time that while scrolling through blogs, le boyfriend crawled up my shoulder and said “wow that looks good, you should do it”
That is one in a lifetime thing, so I needed to share it haha
Great recipe, I guess I will be trying it soon
Jules.- http://thekiwidiaries.com

These look incredible, I’ll definitely be trying them out!

Hi guys. I would love if you would do a food post that isn’t pasta :)
It’s quick and easy, but so many of us can’t eat it, sadly.

We don’t eat refined carbs very often. I wonder if you could make this with spaghetti squash as part of the stuffing? I know, not really the same but i bet it would be WONDERFUL :)

That looks and sounds absolutely delicious!

I cooked this a few weeks ago and it was simple and so delicious! It’s also a really easy recipe to modify for those of us with special dietary needs!

Hey, it’s great to hear from one who actually tried it. I thought the result looked a little bit too oily, how bout the taste? I really want to give this recipe a try, so any tips are welcome. Thanks!

Reminds me of this Greek dish: https://fortheloveoffeeding.wordpress.com/2012/03/26/rice-stuffed-vegetables-yemista/

Delicious! In the summer we make raw bell peppers stuffed with rice and veggies and they are very good too!
I have never done it with pasta, great idea!

I don’t know why it hadn’t occurred to me before to combine my favorite vegetable to cook with (peppers) with one of my favorite meals (spaghetti). Mind. Blown.

What a great idea! I’ve stuffed peppers before, with rice or quinoa and beans, but I never thought to stuff with pasta. Genius! Makes pasta night seem a little more virtuous, too. :)

This looks delicious! Thank you for sharing!

I never thought of stuffing peppers with spaghetti before but I’m definitely going to try it now! These look delicious!

I would never think to use a pepper as a howl, but it looks so delicious I have to try it!
Taylor
http://www.tspoonfulofsugar.com

This would be so good for pasta portion control (something I struggle with ;)

I’m drooling just reading this recipe… Thanks for sharing