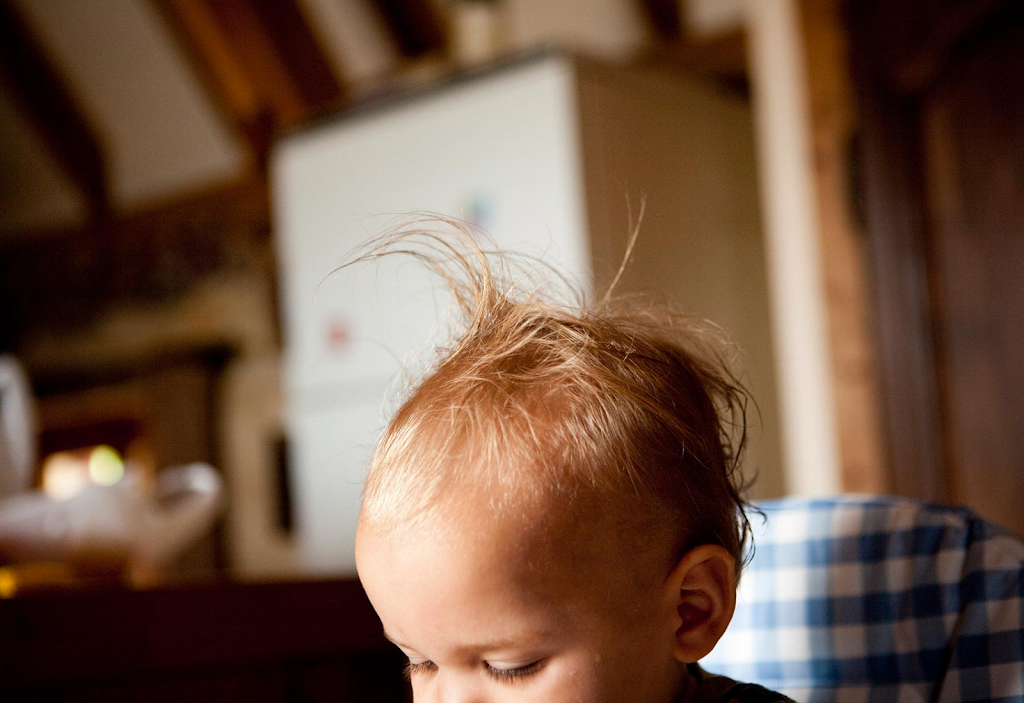 When I was growing up in the eighties, everyone I knew had pretty basic middle names: Andrew, Jacob, Marie, Anne. But nowadays middle names are on fire!

My friend gave her baby the middle name “Swift” because her labor was so quick.

Our friends chose the middle name “Buffalo” for their son because it was his dad’s nickname growing up. “It took my husband nine months to convince me,” my friend told me. “Then, in the middle of the night after signing the birth certificate, I had a mild panic attack at the hospital. Now I love it.”

A journalist named Justin Rocket Silverman explains his name: “That has been my name since I was eight years old. Before that it was Justin R. Silverman. That’s still my legal name. But at the tender age of eight I asked my dad why I had only a middle initial, and he told me that he and mom had done that so that I could choose my own middle name. As long as it started with the letter “R.” So I did what any eight-year-old boy in his right mind would do and I picked ‘Rocket.’ ”

P.S. The most popular baby names, and the crazy things you do as a parent.

Tags: baby names
375 COMMENTS
WRITE A COMMENT
Motherhood
most popular
01
21 Completely Subjective Rules for Raising Teenage Boys
02
Best of: Parenting Around the World
03
Trying Out Slow Parenting
04
How Did You Know You Were Ready to Have a Baby?
05
Three Transgender Kids Share Their Stories
May We Suggest…
By Joanna Goddard
Motherhood
What Are Your Favorite Baby Names?
June 14, 2021

855 COMMENTS
By Joanna Goddard
Motherhood
Conversations With a Seven-Year-Old
March 8, 2021

We wanted to honor my mother-in-law when our second daughter was born and her maiden name was Kathryn McCormick. So we decided either Lindsay Kathryn or Megan McCormick would be nice but couldn’t come to a decision. She was born on Mother’s Day and our last name starts with an “O” so after realizing that her monogram would be mOm it only made sense to go with Megan McCormick. My mother-in-law was thrilled that we used her maiden name. Now that she’s married her last name starts with Mc also (mMm) so it’s a good thing that my mother was from Ireland because her name is now definitely Irish.

My middle name is Angel! My great grandmother had always wanted to name one of her own children that but her husband had always refused. My own mother was very close to her and wanted to name my sister and I both after her in some way. My sister definitely got the short end of the stick as her middle name in Berdine.

My middle name is Fawn, like a baby deer. My mom was a hippie.
I gave the same middle name to my own daughter. <3

I recently changed my middle name from Marie to callahan. When I took my married last name I went the extra step to change my name from my aunt/godmother’s name to my grandmother’s maiden name. I always identified more with my dad’s mom. Than my mother and her family. Though she died when I was young I love hearing stories about her. I have just a few photos of her. My married last name is Scottish and I feel like my name fits me now. Also I tell people. If you knew my aunt you’d change your name too!

My mom was done having kids before she had me. My father still wanted one more child and spent a lot of time convincing her. Finally, she told him, “If you want another kid, then you get to name him or her.” So if I were a boy, I would have been David Stephen Phillip Fox (after my father, grandfather, and great-grandfather). And because he liked the names Angela and Elena, he combined them to form Angelena, then used my mom’s name as my middle name. Making me Angelena Sonia Fox. He adored my mother with his entire soul, and he loved me even before I was born. Those are things I hold onto now that he’s passed away. And I hope to pass down my mother’s name to one of my daughters, too.

I couldn’t just tell you the part of the about my middle name. The whole thing is a beautiful story that I’m very proud of.

My middle name is Claire, which is the first name of my only, dearest cousin. Sometimes I go by Dinah Claire with my family members and when it comes to my online life I’ve been dinahclaire86 since highschool (or middle school?) – 15 years or so! Because of Facebook and Instagram I often run into friends of friends associating me more with Claire than Dinah – presumably because Dinah is a less common and more difficult name. There is a little extra confusion when I introduce my daughter, Clara. Clara Lane – Lane is my since-middle school best friend who I knew I would have forever and so promised, back then, that my daughter would be *Something* Lane *Something*. My husband and my father, grandfather, great-grandfather, etc. are all Thomas – coincidence. And my father had no sons so I told my husband our boy should be Tom too! And he shot that right down, so he is Calvin Thomas, which means as much on my side of the family because Calvin was my paternal grandmother’s maiden name, and a name my father would have used if he hadn’t had four girls (!) I love that this explanation is always somewhat confusing. This sounds trite, but I love the heritage of these names. Though they sound ordinary and uninteresting to an outsider (though, they are fantastic) they are full of meaning and history to me, even more than I’ve mentioned. And the fact that they are all swirled around and re-used and altered and smooshed together feels like family and wholeness to me.

My middle name is Joan after my mom. I have two little girls – Rebecca Grace & Johanna Hope. I liked the idea of using their middle names for qualities I hope they’ll grow up to have. I now like them so much that once I’m done breastfeeding I’m going to have “Grace & Hope” tatooed on my shoulder blade – I can’t wait!

I absolutely love your blog. The colors and your tone provide me with a sort of solace when I panic about motherhood. Thank you. My daughter’s middle name is my last name, Pari. In hindi, it can be translated into fairy or angel. During my pregnancy my husband and I were unsure of what to name her but I was always certain that she will have both my last name and her fathers. It seems fitting, her first name is hers and hers alone, the middle name we share and her last name is shared by all three of us. Luckily, my husband doesn’t mind this connection that is shared by the two of us alone.

My middle name is Frances, which is a particularly handy family name since you can change one letter and use it for boys or girls, and then there are many relatives with the name, so it gets repeated a lot on that side of my family. I have the name for my maternal grandfather who died shortly before I was born but it’s also my mom’s first name, and SHE was named for a maternal uncle who died young.

My sibs and I all have family names for first and middle, and we all have names from each side of the family, although I’m the youngest and my first name is just a name my parents liked, that also fits my dad’s ethnicity, instead of being named for a particular person.

Having family connection with names is important to me. My partner and I aren’t at a picking names stage yet, but I hope he’s open to sharing family names from his side, even though his family history is complex, because I like feeling connected to both sides of my family through my names. He has a religiously based first name, a middle name after an auto repair shop in his hometown (no joke!), and a last name from someone who is no longer part of his family. So we come from opposite naming traditions!

My middle name was Lynn; hated it. Along with my first name I sounded like a country music star. When I got married I changed my middle name to my maiden name which i really love because i was able to keep a name i loved and get a new one.

No middle name for me, but my son’s one is Leonardo – from Leonardo da Vinci, as a promise of a brilliant and daring mind (the first one is Matteo, and it sounds so good along his middle name!)

I guess our daughters middle name is more adventurous than her first name. Her middle name is Magnolia. We live in LA but I’m from the south and wanted something to reflect that and we live at the corner of Magnolia Avenue and have a huge magnolia tree in our yard here. So it was just right. Her first name is Florence, so I liked the idea of having something a bit more whimsical as a middle name to take the edge of the more formal first name. Anyway, I love talking about names!

My middle name is Rose, as is that of my niece and two of my cousins–all after my grandmother. Interestingly, my grandmother’s legal name is Mary. When I was in my 20s, I finally asked my grandmother why she is called Rose. She said that when she was quite young, her mother’s best friend lost a child, a little girl named Rosie, in a tragic accident. From then on, my great grandmother called my grandmother “my little Rosie” in honor of her friend’s daughter. Such a sad story, but so sweet to think that the women in our family carry the name (and the memory) of little Rosie to this day.

We met and fell in love in Boston…

My boys’ middle names are their grandfathers (Charles and Richard) but my daughter’s middle name is Katherine for the first woman to run Boston. I ran a marathon early in my pregnancy and the Boston bombing happened right at the end.

Mine was originally Rebecca, and I love it–not your typical Marie or Elizabeth, but still classic. When I got married, I added in my maiden name, so now I have two.

My middle name is Orlean, after my dad’s dad who died way before I was born. I can’t really find anything about what it means.

We did the opposite for my son: we picked a common/normal middle name (Thomas) because we went a little wild with the first name (Fox).

My last name is so long that my parents gave me the middle name “Kay”, which leads to approximately everyone asking me what it stands for. I’d change it but…I don’t really care.

My middle name is Celeste, after my grandmother Celestine.

I wasn’t given one, I now use my maiden name as my middle name and love it!

My middle name is Wrenn, because my mother’s name is Jenny Wren – she gave me two n’s at the end because I’m “the second one”. I love it, and if I have a daughter I’ll definitely give her the same middle name, with a little bit of flair to make it her own.