Wedding Do or Don’t: Restaurant Registry 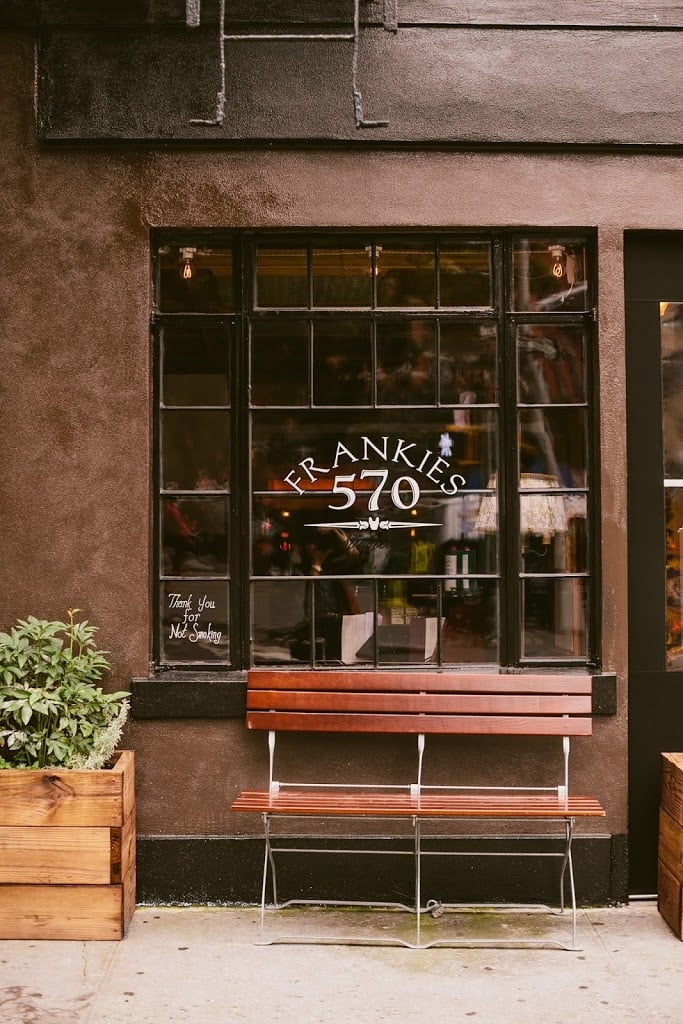 Alex and I went out to dinner the other night, and we ended up chatting with a couple who had created a restaurant registry, instead of a traditional registry…

“All we love to do is go out to eat,” says Lesley. “Plus, we got married later in life and had everything, so we didn’t want to say, ‘Hey, buy me a nice bowl.’ We’ve always liked the idea of giving experiential gifts to friends, as opposed to stuff. It’s really special. So we created an online registry with descriptions of dinners ranging anywhere from $25 to $350—from Rockaway Taco to Alinea in Chicago. We went to all the dinners the first year of married life—we would write to the people who gave us each one and tell them, ‘It was amazing! We had the veal!’ ” 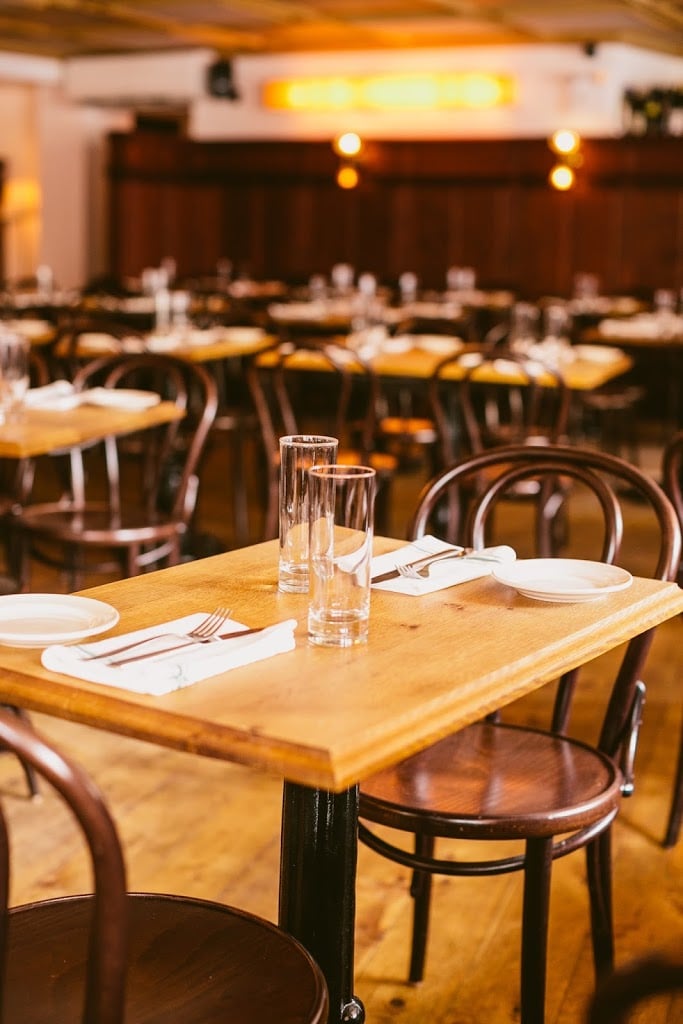 Thoughts? Would you do this? You’d have the most delicious first year of marriage!

(Photos by Julia Robbs for Cup of Jo)

I just got married on the 18th and we used Zola. It was perfect, I’d highly recommend it!

THE most AMAZING idea! i love this even if you’re not getting married “later in life”… who wants a fancy bowl anyways?!! :)

I probably wouldn’t buy someone a present who asked for this, in all honestly. It’s not what a wedding present is supposed to be in my eyes.

That said, I would happily buy a meal off my own back for a foodie couple of good friends, especially if they didn’t have much money.

Restaurants are an indulgent treat. It just doesn’t seem right to ask for that as a wedding gift.

Love the peeps answers who said they asked for nothing and got lovely gifts. Better that people are generous from their own heart.

What a Fabulous idea! X

Nice one. A unique thinking, attractive style and also I like your selection of pictures for posts.

Interesting idea. In my opinion, nothing is a “don’t”. Do what makes you happy. From my experience, some guests have no problem ignoring a registry anyway, lol.

Yuck. So tacky. If you don’t need anything, then say no gifts, or suggest organizations for donations. I don’t have a problem with even giving money toward a down payment or something, but I’m not going to fund someone’s entertainment budget.

Um, can I pick a man based on this requirement? Love the idea, I always plan my vacations based on restaurants so this would be a fun twist.

I love this idea! I set up a honeymoon registry before my wedding a few years ago. My then fiancé and I already lived together and we were already set on cutlery, dishes, towels and appliances. I’m sure I had some eye rolls from our guests about the new-ish registry back then but I was glad I did it. If we had gone with the traditional registry where was I going to store the gifts in our small place?!

Anyway I wish it had this idea before my wedding. My husband and I love dining out and this is something we would have loved.

On the fence with this one. It would be fun, but it’s a bit like “Woooo look at us, having all this fun without you, but thanks for picking up the tab!”.

As a wedding planner, I freaking LOVE this idea. So many of my clients have been together a long time aleady, have their own stuff, that the challenge for me and with them is finding a twist on the registry. I really like this outside-the-box thinking!

I would love to see their registry to get ideas and see samples. Do they have a copy you cost post a snip bit of?

Oh hey, it’s Thomas Carter from Estela in the picture!

When my boyfriend was done with his internship in Paris, the company gave him a gift voucher of €400 that he can either use for travelling or at some restaurants.

Rather than spending everything for one trip we had lots of wonderful date nights and sometimes we got lucky because restaurants just accepted the vouchers even if it wasn’t specified in payment methords.

I can’t imagine being so lucky! I really appreciated his company for this. I wish I could do the same for our wedding but in our part of world we don’t have the “wedding registry” custom even though we both are from different countries. But I would definetely go for it since we both are planning to go for an expatriate life for few years after getting married. We can’t basically carry bowls and kitchen mixers with us :)

I love this idea–not everyone wants or needs kitchen stuff and towels. And, while I understand that some people think all registries are tacky and seem demanding, the bottom line is that people love you and really, truly want to give you gifts to celebrate your marriage. Some people never buy gifts from the registry (my mom’s best friend never does–she crocheted my husband and I a beautiful blanket that I love), some appreciate the ease. I like to choose things from registries that I know I use all the time, so it still feels thoughtful. But, I know that not everyone cooks, so I think this restaurant idea is great. I also saw this: http://www.bettereverafter.com/ and wished that it had been around 2 years ago when I got married!

I think this is a cool idea – I’m a big fan of experiential gifts, and I might even take this idea a step further and make a registry that wasn’t limited to restaurants, but other experiences too (like rock climbing lessons, a fun boat tour, etc) It’d be a great way to further deepen the bond between newlyweds, I think.

I love the idea, and I am totally on board. That being said – I am pretty sure I would have mentioned it to my parents and had my mom tell me “absolutely not” in two seconds flat. While she is modern, she recognized that not all the poeple attending the wedding are. And we all know that weddings are really about “them” – does this make sense? Sometimes we have to bite the bullet and respect our “elders” – even though it’s LAME.

But depending on your wedding, lifestyle, family – this is great and could totally work. Just not my family of old stiffs! haha

Awesome! I would have done the same, if we would have had it here. It seems the perfect wedding gift for foodies.

We give dates and restaurant cards as presents, and always are told it was the best gift! I would have loved this- we were in the same place and everyone gave us giftcards knowing we probably already owned everything.

Reply
jenn @ beyond the stoop

I LOVE the idea, but I would be afraid that i’d end up with endless gift cards to applebee’s, olive garden, and all of those awful chain restaurants that sell giftcards at the Kroger check out line instead of the one-of-a-kind places we frequent in NYC :(

I love this idea! I’m not a conventional person and I railed against the idea of a wedding registry for many reasons, but I had relatives who wouldn’t take “no gifts” as an answer.

In 2005 when I was engaged and before my husband-to-be got sick, I decided to set up my own registry with the Vancouver Art Gallery shop at the Canadian reception (we got married in PA, so it was the second location). It was an idea I was forced to abandon after his cancer diagnosis, but I never regretted foregoing the traditional wedding registry.

I was a wedding photographer in Toronto for five years after my American husband passed away, and something I learned through observation is that weddings (followed by child-rearing) is an area of guaranteed criticism and expectation. It’s hard for couples not to give in to the social pressure, but in the end guests should understand the wedding is about the couple, and they’re in attendance because they’re near-and-dear.

It’s clear that this couple love to eat out, and buying them pots and pans for a kitchen they barely use and is fully stocked already just doesn’t make sense. Not to mention, if guests go to dinner with these folks — which I’m assuming they will at some point — they already have a big list of suggested places to go TOGETHER, making it even more personal and experiential.

Guests who prefer to give money will give money, anyways, so why not have an option that is customized to the couple? Besides, one advantage to this sort of registry is that duplicate certificates for a restaurant is no big deal, where a registry of stuff has some potential for mix-ups and order errors.

If you’re a foodie or know foodies, I think this is a fabulous idea. The gifted immersion blender may never get used, but everyone has to eat every day.

(A small footnote to my story: after being widowed for 8 years, I got married in the Azores, packed up my life in Toronto and moved to Portugal. And I was even less traditional this time: no wedding registry, no witnesses, and no rings!)

Have you heard of the site Zola? It’s pretty new, but started with the same idea that nowadays people getting married are older and/or have been living together and do not need traditional wedding registry things.

It’s a beautifully designed site, too— some of the creatives behind Gilt.com started it!

BRILLIANT! I always amazed at how ingenious people can get.

I tend to be very traditional about such things (even though I am anything but traditional most of the time) so I was on the fence. But when she said that they used them all the first year of marriage and immediately sent a note telling the giver about their night, I was sold.

If I had given them the gift and received a sweet little note about how great their night was and what they ate, I would enjoy it so much more than a standard “thanks for the french press that I asked for. It was just wanted… since I asked for it.”

Also, it just seems so cool to imagine the couple with a list of restaurants to look forward to going to all year long. Kind of like a first year of marriage bucket list. I really love the idea!

Freakin Brilliant! For so many reasons! Most people spend a lot of money on their wedding and don’t have a lot of money to spend on going out after. It facilitates making time to spend together… an essential part of the early parts of a marriage, my husband and I use these date nights as a chance to relax and talk about the “state of our union”… catch and up discuss things. It alleviates the issue of trying to make time to write all of those thank you notes, right after the wedding when you are trying to get back to work and get back to your normal routine. And it creates the opportunity to write a truly personalized thank you card, one worth sending. I would so much rather get a “Thank you so much, the evening was wonderful we had the veal, it was fantastic blah blah blah” than “thank you for the blender” any day.