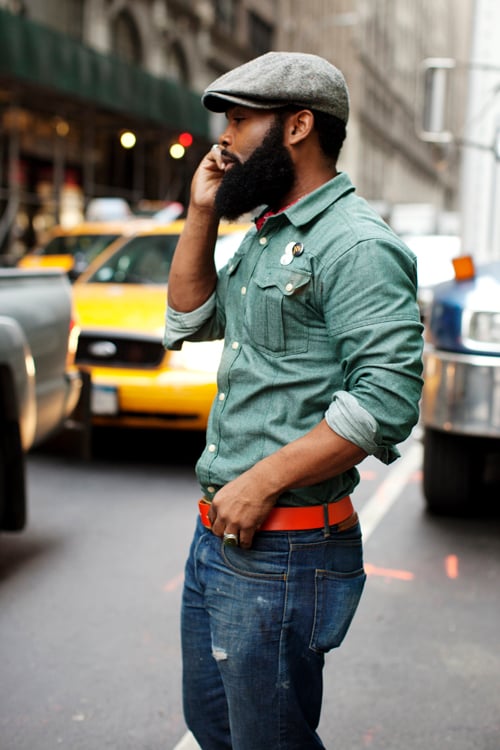 When Alex accidentally grew a beard five years ago (he had the flu), I told him he looked rugged and handsome. Surprised, he said I was the only woman he knew who actually liked beards. But since then, beards have blown up in a huge way. For the past few years, it has seemed as if every guy—famous or otherwise—has grown a beard. Do you agree?

But last week, the Guardian ran an article asking, “Have we reached peak beard?” Apparently, they have gone mainstream and now might be on the wane.

So, I’m curious: Do you still like beards? Are you sick of them? Do you just want to see a guy’s actual face for once? I’m still a super fan. Over the past five years, Alex has sometimes considered shaving, but I insist he never does!

P.S. Before and after.

(Photo by The Sartorialist)

Tags: alex
216 COMMENTS
WRITE A COMMENT
Style
most popular
01
A Week of Outfits: Naudia Jones
02
My Beauty Uniform: Samin Nosrat
03
My Packing List for England
04
12 Readers Share Their Meaningful Tattoos
05
The Best Sneakers for Long Walks
May We Suggest…
By Joanna Goddard
Style
Do or Don’t: Balloon Jeans
February 9, 2021

Totally #TeamBeards. Especially in a city like NYC where men can be so manicured and pretty, it’s nice to see a man look like a MAN-MAN. I always prefer my fiance with at least a few days scruff, if not a full beard.

I’ve never thought much about them until I saw a friend who had shaved for the first time since I’d met him. http://infonewbi.blogspot.com/2013/04/download-opera-mini-7-untuk-hp-terbaru.html

Reply
STARTS WITH A KISS

I love beards…That man in the post’s picture is exactly why :-) it looks great on him.

Tell him not to get rid of it he looks very very handsome ;) (I love your pic in parenting Mexico & all the posts I have just discovered) All ready following your blog ;)

Love them! I have seen my husband clean shaven one time in the nearly eight years we have been together and it was WEIRD. I much prefer the beard, and I have come to realize that the men I find most attractive have beards.

beards will always be a weakness for me. my husband has had some sort of facial hair (except for one mistake for a month) during the entirety of our 5+ years together.
beards forever!!!!

I looooove my husband’s beard. I actually have called him “the husbeard” for the past three years, and it has caught on to the point that people who don’t know him personally will still come up and say, “hello husbeard!” I’m with some of the other readers, in that I never really thought much about beards until my husband grew one, and now I find tall, dark-haired, bearded men extra attractive!

Beards are absolute magic, and I will be forever grateful that my husband has one and I no longer have to worry about kissing a stubbly, scratchy face. A well grown beard is hands down the sexiest feature a man can have.

Depends on the face! I think my hubby would look handsome with a beard, but alas, he can never grow one. His scruff always comes in patchy… :D Alex looks great with a beard!

I refuse to let my husband shave his beard. I LOVE HIS BEARD!

My husband has a beard and shoulder-length hair, which he frequently wears in a ponytail or man-bun. I love it. The beard makes him look serious and distinguished, in spite of his non-traditional hairstyle.

beards with a flannel = swoon … but then again my boyfriend and I are in Maine :)

Oh beards, they will always be the best. I think my husband’s beard is super sexy, luckily he is a beard man – he knows he works it :)

I like beards but my husband does not like the itchy way his face feels while he is growing one, so I only ever get him with scruff. I think I like them because my dad usually had one… I have a great picture of my dad and two uncles in the 1970’s, all with beards and hideous(ly awesome) shirts.

I guess I’ve commented before that I liked beards. I got my boyfriend to wear it and still love it! And he still wears it! :)

I love a beard! My husband and I met in the military, so he wasn’t allowed to have a beard. The first time I saw him with a beard was when we were dating. He was on leave for a month to visit his family in Europe. I went to the airport to pick him up. I can vividly remember him walking up to me with a full beard. My heart skipped a beat because he looked so handsome! We are both out of the military now, so he maintains a short well groomed beard. I still love it.

Beards earn two big thumbs up from me!

I definitely think it depends on the man. When I was in marching band in college, some of the guys would grow beards when the weather turned cold, and that right there showed me beards are NOT for everyone. Some men can handle being scruffed up; some men are already haggard (like Zack Galifinakis) and MUST SHAVE NOW. If a beard makes you look in any way homeless or down on your luck, then ya just can’t rock it. Sorry, but I feel strongly about this. Maybe I’ll blog about it. :)

I never thought I would…until I met my husband! After a cycling accident left a large scar on his chin, he couldn’t imagine scraping a razor over it, so grew a beard! I’ve seen pictures of him without his beard, and he is almost unrecognizable! Love my husband and his beard!