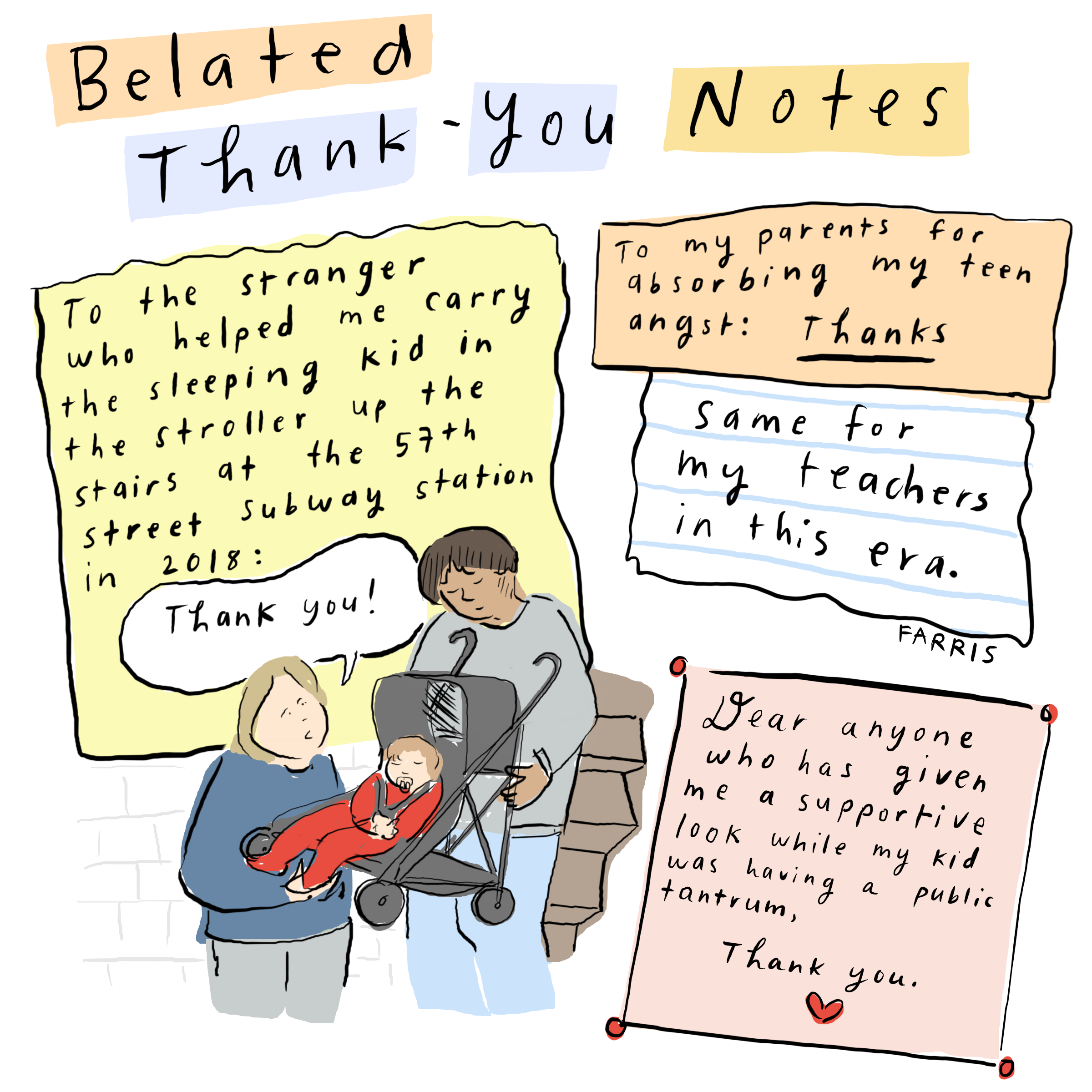 Definitely all the teachers. By the wonderful Grace Farris.

P.S. Synonyms for home and where you live.

To the owner of a bar along the beach in Italy who rushed out when my toddler’s leg got stuck in the bicycle wheel from her baby seat, packed a bag of ice on it and bizarrely three water bottles, got his beat up old silver car out and drove us to a pediatric hospital emergency room. She was screaming, it was an ugly injury, we spoke no Italian, but I remember him and am grateful to this day.

Thank you for the chance to thank him.

that is so lovely. and, years ago, we actually had the same injury with anton — thank you to the lady on the sidewalk who locked up my bike while I cuddled Anton on the curb, thank you to the cab driver who drove us to the hospital, thank you for the nurses and doctors who fixed him up, and thank you to the nurse who brought him storybooks and apple juice while we waited. <3

To the elderly woman getting her shaky husband and their suitcase back to their car after a flight late last night, for the hug when I needed one so much.

My son and I were wandering the airport parking garage, unable to find the car my husband had parked when we rushed to the airport that morning on hearing his father died suddenly in France. In the end, they wouldn’t let my son fly with a passport set to expire two months down the road, so he and I had to give up and trudge back homewards, bitterly disappointed and bereft, while my husband and daughter went. While we wandered through floor after floor of the garage, we saw her struggling with wobbly husband and luggage and I offered to load it all into her car for her because we were in no particular rush – it was already extremely late, he was already dead, the plane had already taken off. When she asked us how she could help us in return, I told her there was no fixing it, my father in law had died that morning and they wouldn’t let us on the plane for the funeral. And she replied:

“We are coming back from a funeral for my brother. Some things are so hard.”

and held out her arms and we both collapsed into her and cried, my son wrapping her arms around her middle like he used to do with the mother-in-law who passed just before Covid. I can still feel her royal blue down coat fabric on my cheek. It was the only part of a nightmarish day that made any sense.

To the guy on the subway platform in 2010 when I just moved to New York and was totally alone who told me I had a smile that could save the world. To this day, after a six year marriage full of lots of love (not to this guy, who I never saw again), I still think it was one of the kindest things anyone has ever told me. Thank you, guy.

Love this reminder of all the good things! Thank you, Dr. Farris.

Thank you to all the women over the years who have supported me and believed in me, especially when I didn’t believe in myself. I think of you often, when I can’t sleep or I am faced with problem.

I’m just thrilled to see someone use the word ‘belated’ correctly.

To the woman 7 years ago who pulled my then 2 year old out from underneath a bouncy castle full of kids that fell over on top of him as we were passing by. I was screaming and screaming and no one could hear me over the kids. But that angel did. I never got to thank her in that moment but I bless her every single day.

In the 90’s when I was living alone in a tiny studio apartment in Vancouver, I was in the grocery store debating buying milk when I joked to a man on my floor that milk was the heaviest substance in the world. I walked away without buying any. Later when I was leaving the apartment, I found 2 cartons of milk left at my door. He moved out that week I never got to thank him. So thank you kind man!

My recycling bag burst this morning in the hall and my neighbor came to help me pick it up, even when I said I was OK.