The Coquito Recipe Everyone Begs Me For 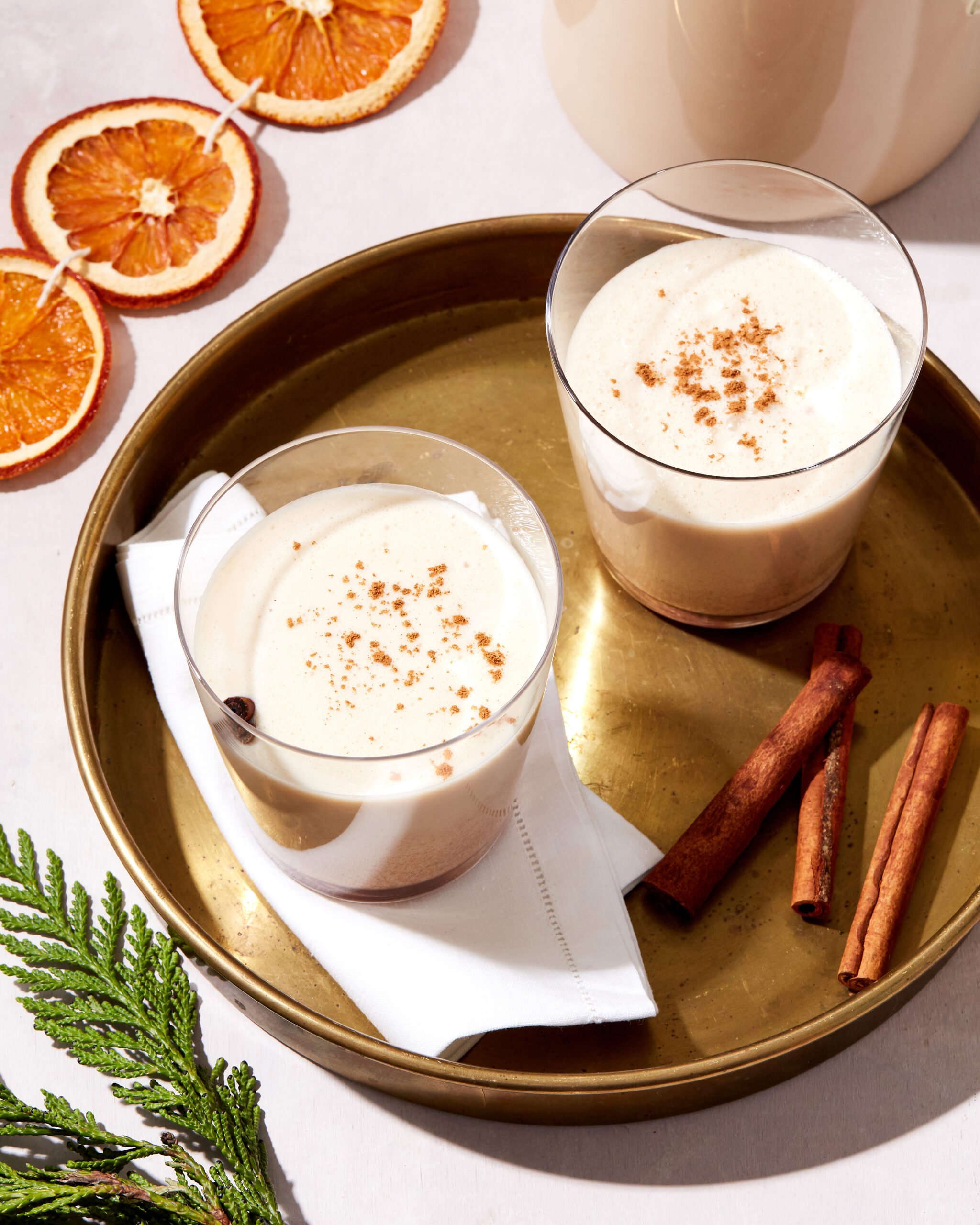 Recently, while shopping at my local Stop & Shop, I couldn’t believe my ears…

I heard an ad for Coquito playing over the intercom. I looked around to see if anyone else was as shocked as I was to hear that this staple of Puerto Rican holiday festivities was being marketed to the everyday shopper in this everyday Queens supermarket. Could it possibly be that the drink was trendy? How? To me, it feels like our best kept secret, but I was ecstatic that non-Puerto Ricans were discovering it.

If you’ve never had Coquito before, I like to describe it as a tropical eggnog. (Except Coquito actually tastes good. Sorry, eggnog lovers!) The secret to the best tasting one is fat in the form of egg yolks. Traditional recipes like in A Taste of Puerto Rico by Yvonne Ortiz (a must-have Puerto Rican cooking bible) incorporates raw egg yolks; however, I like to incorporate granulated sugar with the egg yolks over indirect heat to give the Coquito an almost custard-like texture and to eliminate any bacteria.

Growing up in Bushwick, Brooklyn, I remember Coquito was served at all the Christmas and New Year’s parties while we opened gifts and played games, the adults dancing and mingling to the music of Héctor Lavoe and Celia Cruz. The children were offered virgin batches while the adults drank theirs spiked with white rum.

Every year, a few days before Christmas, my mom and I make large batches of Coquito to give to our family and friends. She has me crack eggs and save their yolks, while she takes care of the cans of milk stacked to the ceiling. We are constantly asked for the recipe — I think that’s because ours isn’t overly sweet, just rich and indulgent, and most important, spiced to perfection. Lucky you, here it is. 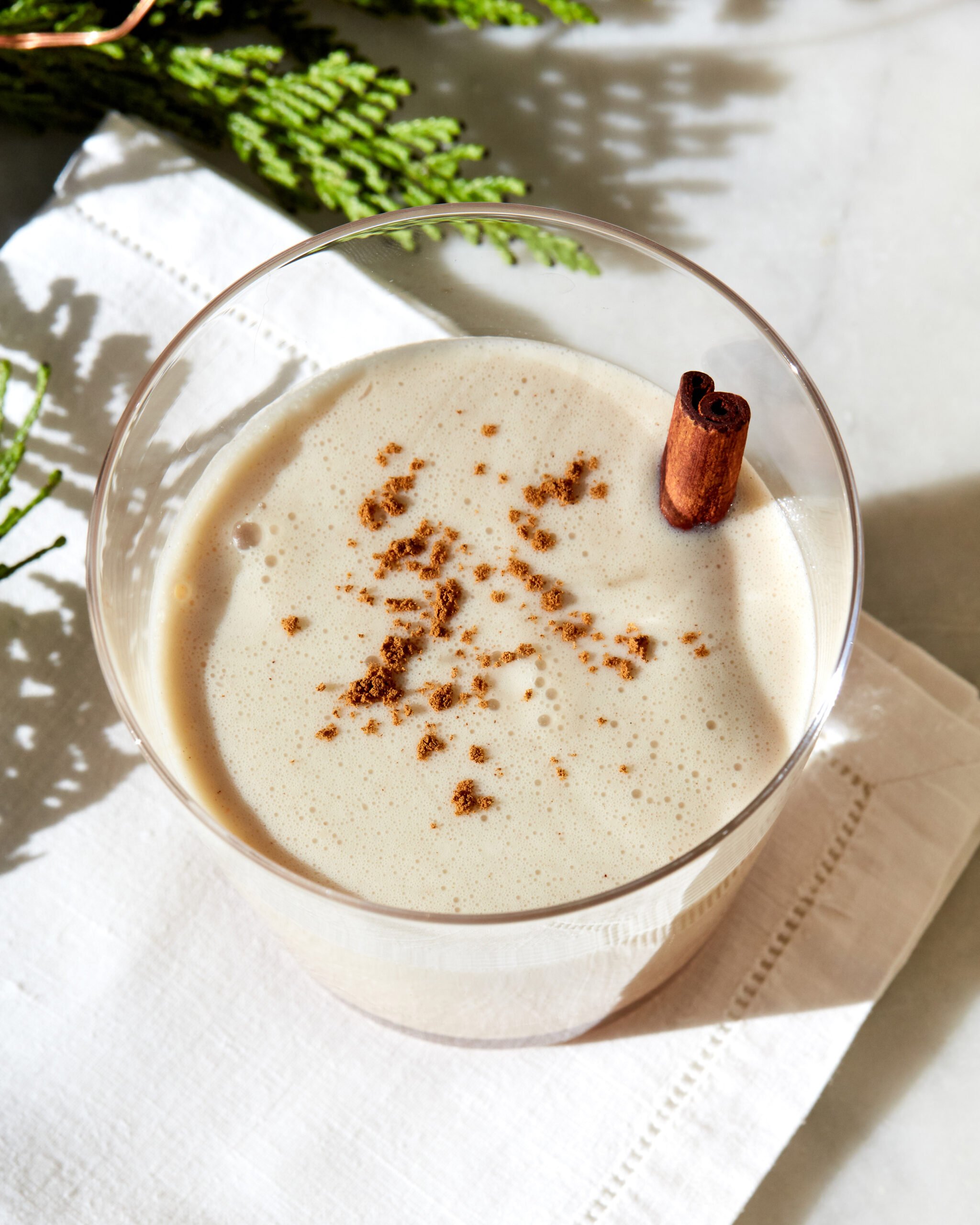 Coquito
As mentioned above, the virgin version is delicious, too. If you go this route, substitute the rum with one extra cup of coconut milk, totaling two cups of coconut milk. (Coquito is Spanish for “little coconut.”)
Makes 5 servings

Pour coconut milk, sweetened condensed milk, evaporated milk, and white rum (if using) into a blender. The coconut milk may appear curdled but that’s completely normal. Blend the milk mixture for 30 seconds on low. The mixture should be smooth and slightly frothy. Pour into a large bowl, cover loosely, and place in the fridge.

In a small saucepan, boil 1 cup of water with the cinnamon sticks. Once the water comes to a rapid boil turn off immediately and set aside until cool to the touch.

In a separate large saucepan, add water to come two inches up the sides, and bring to a simmer. Combine egg yolks, ½ cup granulated sugar, and 2 tablespoons of water in a medium heatproof bowl. Set the bowl over the saucepan and reduce heat to low so the water is at a light simmer. Using an electric mixer (or a large whisk and a strong arm), beat mixture on medium-high until the eggs triple in volume, are extremely pale yellow, and register at a temperature of 150F-155F, 7 to 10 minutes. Carefully remove the bowl from the heat.

Whisk the egg mixture into the bowl with the slightly chilled milk mixture. The mixture should be eggshell in color. Place back in the fridge.

Once the cinnamon stick water is cool add to the milk mixture along with the vanilla, kosher salt, and ginger. Whisk well. Add the Coquito to a large pitcher and place in the fridge to chill for at least 4-6 hours.

Serve once completely chilled, or bottle it up and give to family and friends. 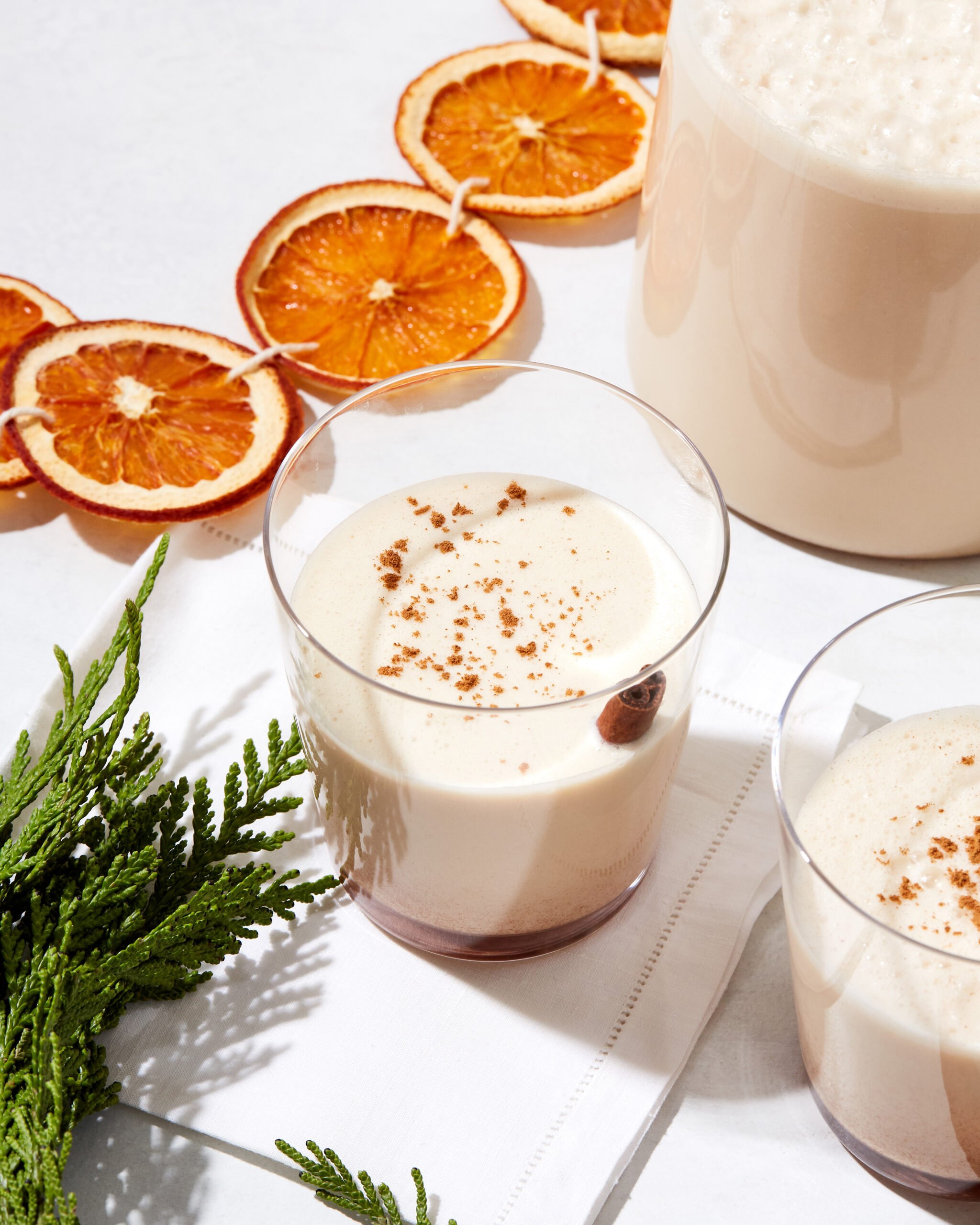 Bianca Cruz is an editorial assistant at Clarkson Potter. She graduated from Hunter College in New York City with a bachelor’s degree in English Language Arts with a minor in German. Following her internship at Oxford University Press, Bianca attended the Columbia Publishing Course and now attends the Institute of Culinary Education where she is currently pursuing a Culinary Arts degree.

Wait. Can someone tell me if Roberto Beltran is a certified Puerto Rican chef? ;)

It’s a shame that some people can be so close-minded and critical. Recipes, just like language, evolve and change over time. The original coquito from Puerto Rico had eggs and I know this for a fact because I have a very old cookbook from the 1920s with two recipes and they both contain eggs. As time passed, people became afraid of salmonella and stopped using eggs. I, personally, have always used eggs but not raw. My recipe is similar but instead of ginger, I add allspice and nutmeg. I place the eggs in a saucepan with the evaporated milk and cook it on low until the milk starts to thicken. I let it cool and then add it to the rest of the ingredients. This produces a creamy, delicious coquito which is like drinking a custard but with a kick.
Recipes also change depending on what area of the island one is from. A good example is our wonderful cod salad known on the eastern side of Puerto Rico as Serenata. But, on the western side, the salad has a different name…it’s called gazpacho. Same flavor, same origin, different names. It doesn’t make it any less Puerto Rican.

this is ponche crema w the egg, not coquito. it’s dominican & venezuelan.

I do not add eggs . It last longer

Great! Coquito is not eggnog. Hence, eggs especially raw should never be used. It’s a recipe for salmonella!

I am 68 yrs old, raised in both the Bronx and spent every summer in PR as a child and teenager. We never used eggs in our traditional coquito mix. Eggs belong in eggnog not coquito

I’m sooo happy to see my culture represented in CoJ; however, this recipe surprised me! Coquito does not have additional sugar or eggs, in my book!

That is coconut eggnog – NOT Coquito. No egg yolks no ginger no meed to cook

Just wanted to say that I’m a little bummed by all the critical comments. For as many people as drink coquito, there are probably as many recipes. Just because YOU don’t make it a certain way doesn’t mean that it’s wrong.

THIS! Spoken so politely, thanks Emily.

Your recipe sounds great! There are so many different versions of Coquito recipes, so everyone here saying ‘this is wrong and that is wrong’ are all incorrect. Don’t judge. Be grateful for someone sharing their personal family recipe. Thank you Bianca. I make Coquito every year and I’m very curious about this recipe… I’m definitely going to have to try it!! 🥥🌴🥂🤍

If you put egg, it’s not coquito. Coquito’s recipe has not egg, sugar or salt.

a favor- please think to include phonetic (phone-eh-tic) pronunciations to blog posts. Id love to make, and gift this, but would want to pay it proper respect by saying the name correctly.

Sorry, not eggs. But my ancestors made another with eggs and called “ponche de leche y huevo” and no rum and they said is for health. But the “Coquito” for Christmas is with rum and no eggs.
But I understand in the different areas of the Island have their own style to make the “coquito”.
Love!

This is the forever war of the egg… the truth is that it is great either way…. have made it both way and it is very good. Tip, I do a small amount just for me because instead of rum I like anissett (anise liquor that tastes like liquorice. ) Yummmmy!

I am excited to try this recipe because of the addition of eggs, since I like my Coquito “ponche” to be really thick, and for the addition of ginger, since I love the idea of an extra spicy christmassy kick” the only thing that I would change is that, instead of the one cup of cinnamon water and one cup of white rum, I would do two cups of Captain Morgan’s spiced rum since it has the cinnamon and other spice notes already built in and also because I find that one cup of rum is too weak for my taste. For an extra cinnamon kick, I will leave a stick of cinnamon right in the bottle of Coquito and let that work it’s magic. I know that I am breaking the rules here, but I know what I like in a Coquito, and I love me a very thick, spicy and boozy Coquito.

Okay..first let me say that I am very impressed how “coquito” and the recipes discussions have been greatly highlighted in the media more than other years. Next, although it is true that they are variations of the recipe they are that personalized recipes. Which that happens regularly in the world of cooking and mixing drinks. They are likes and dislikes. BUT, there are certain things that you should not change and then call it or go ahead and said that it is. In Puerto Rico a drink that you add an egg is called a “ponche” meaning “ponche de huevo” or with egg. My grandma used to do them for us using Welch’s grape juice with a beaten egg and sugar or Malta (malt drink) egg & sugar. There is a coquito with egg as an ingredient which is the ponche coquito recipe. The coquito w/out eggs is the Puerto Rican Coquito recipe which the ingredients are coconut milk, white/clear rum (Ron Blanco) evaporated milk, sugar, powder cinnamon, a pinch of salt and a few drops of vanilla . Now, then the “world” discovered condensed milk -we used to call it leche aguila due to the brand- and it substituted the sugar. There are favorites or due to health issues and then follows the adaptations or versions of the original. Mine, I had to eliminate the evaporated milk and just add more coconut milk or cream of coconut and the other ingredients. Definitely I preferred the Puerto Rican rum Don Q instead of Bacardi’s. Still, the end product continues to be just DELICIOUS! Merry Christmas and continue enjoying these holy days with a shot or glass of coquito your way or mine🙃!

Made this on Christmas for my family and it was a hit! Thank you for this wonderful recipe.

I am puertorrican and have to tell you coquito isn’t made like this. It doesn’t include egg or salt. Stop misinforming the public…

PSA FYI
This isn’t COQUITO other then having someone call it that!!

Coquito DOES NOT HAVE EGGS.

Please do not add sugar to this recipe. Condensed milk is sweet enough. And in true Puerto Rican Coquito you dont add egg yolks. Diabetic coma in a drink. No ginget and no salt, it’s not necessary. This is not a Boricua recipe.

Gosh, what a hurtful thing to say. The author identified herself as Puerto Rican. She mentioned an inspirational Puerto Rican recipe that also contains eggs. I’m not Puerto Rican, but I am a California Jew who is occasionally questioned about being Jewish because she does not do x (thing generally associated with Northeastern Ashkenazi Jews). Unless you’re talking about being vegan, you don’t get to decide if someone else belongs to a community based on whether they do or don’t add eggs to a dish.

This is amazing!!! Thank you!

I must say your recipe is awesome. Being Puerto Rican born, there’s no specific way of making coquito and reading your article today brought back a lot of great memories during my time on the island of enchantment.