Could You Be a Weekday Vegetarian? 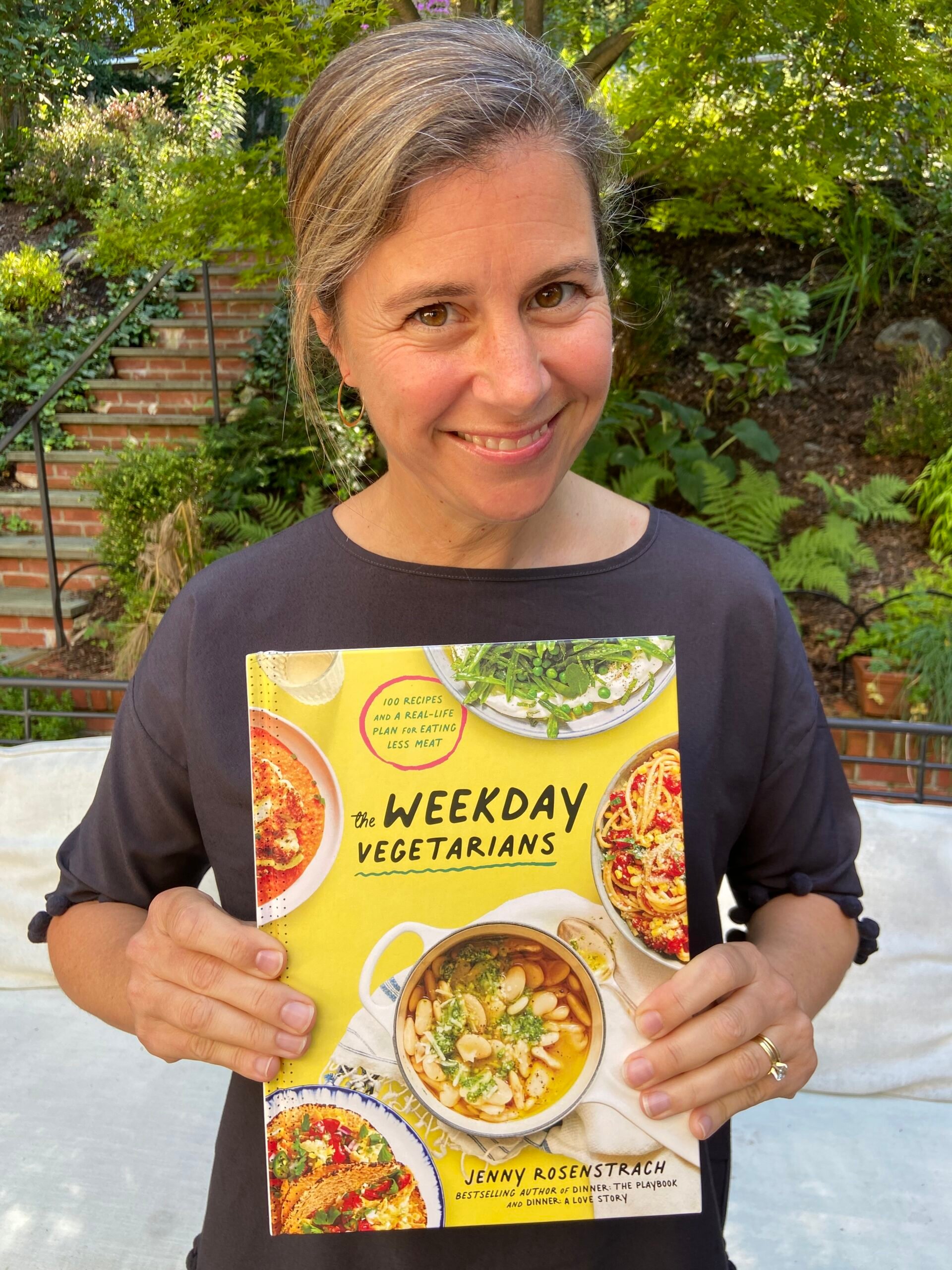 Our beloved columnist and all-around food genius Jenny Rosenstrach has written a new cookbook! The Weekday Vegetarians chronicles Jenny, her husband and their teenage daughters pledging to go meat-free during the week. She developed more than 100 bold, flavorful meals, including a Mushroom Galette, Cauliflower Cutlets and Pizza Salad. I LOVE this fun, inspiring book, so here I chat with Jenny about vegetable stars, crowd-pleasing recipes and and funny fails… 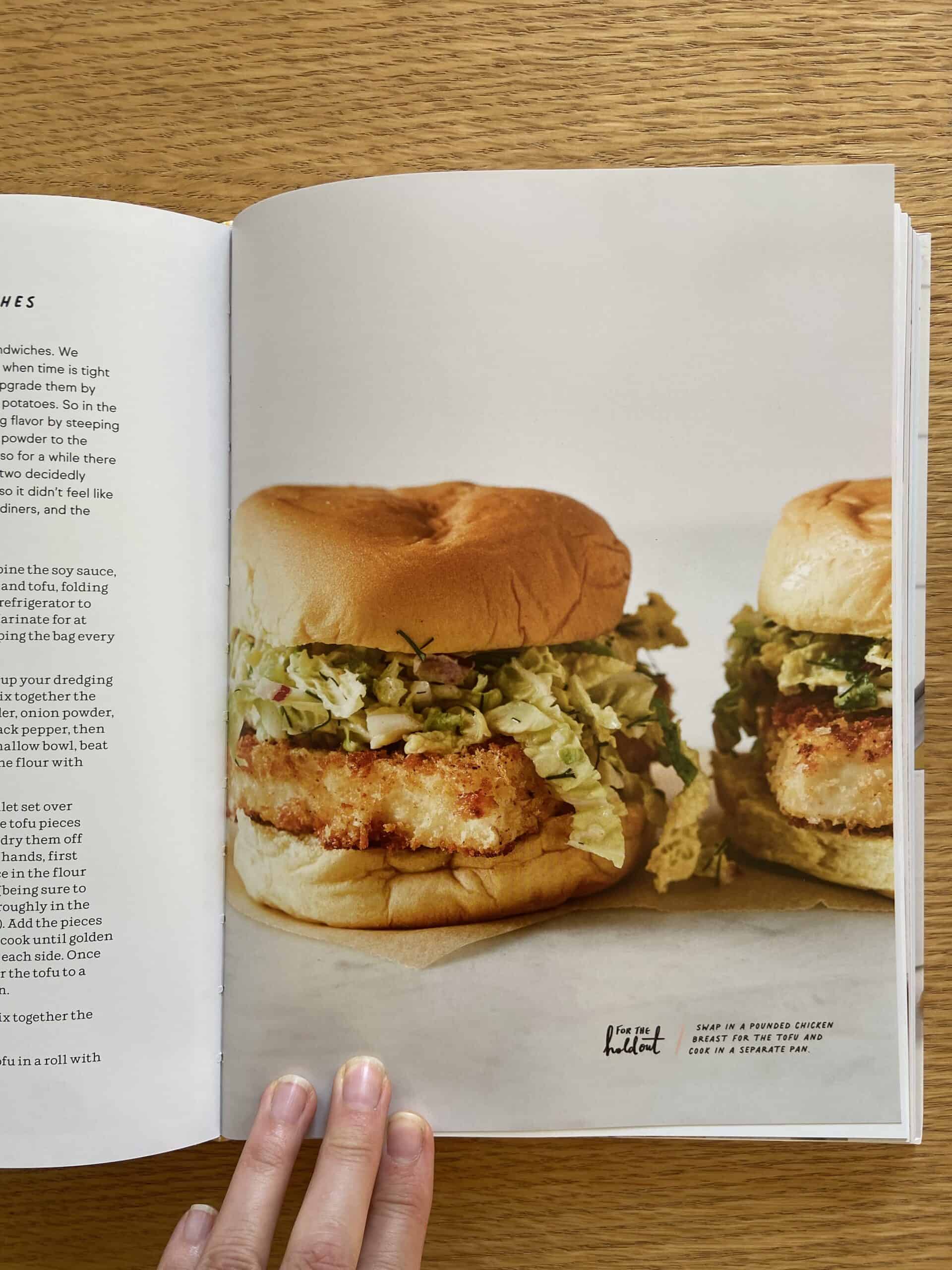 First, how did you decide to become weekday vegetarians?
For a long time, our family had been saying that we needed to eat less meat — for health reasons, for environmental reasons — but it felt intimidating to figure out the next steps because so many of our family’s favorite meals were centered around meat. Then, one day, while walking to the office, I texted my husband, We need to do this. And he was in. Our kids were ready, too. That helped motivate me. So did the weekday strategy — it was easier for me to go into it knowing that we weren’t going to completely say goodbye to our favorites.

Was the transition harder or easier than you expected?
The first thing I did was sit down and look at the repertoire of meals we cooked all the time, and it felt good to see that we already had so many recipes in the bank that were vegetarian — like pizzas! Also, black bean burritos, grain bowls and pasta, of course. I found I had an instant rotation of six or seven vegetarian meals. 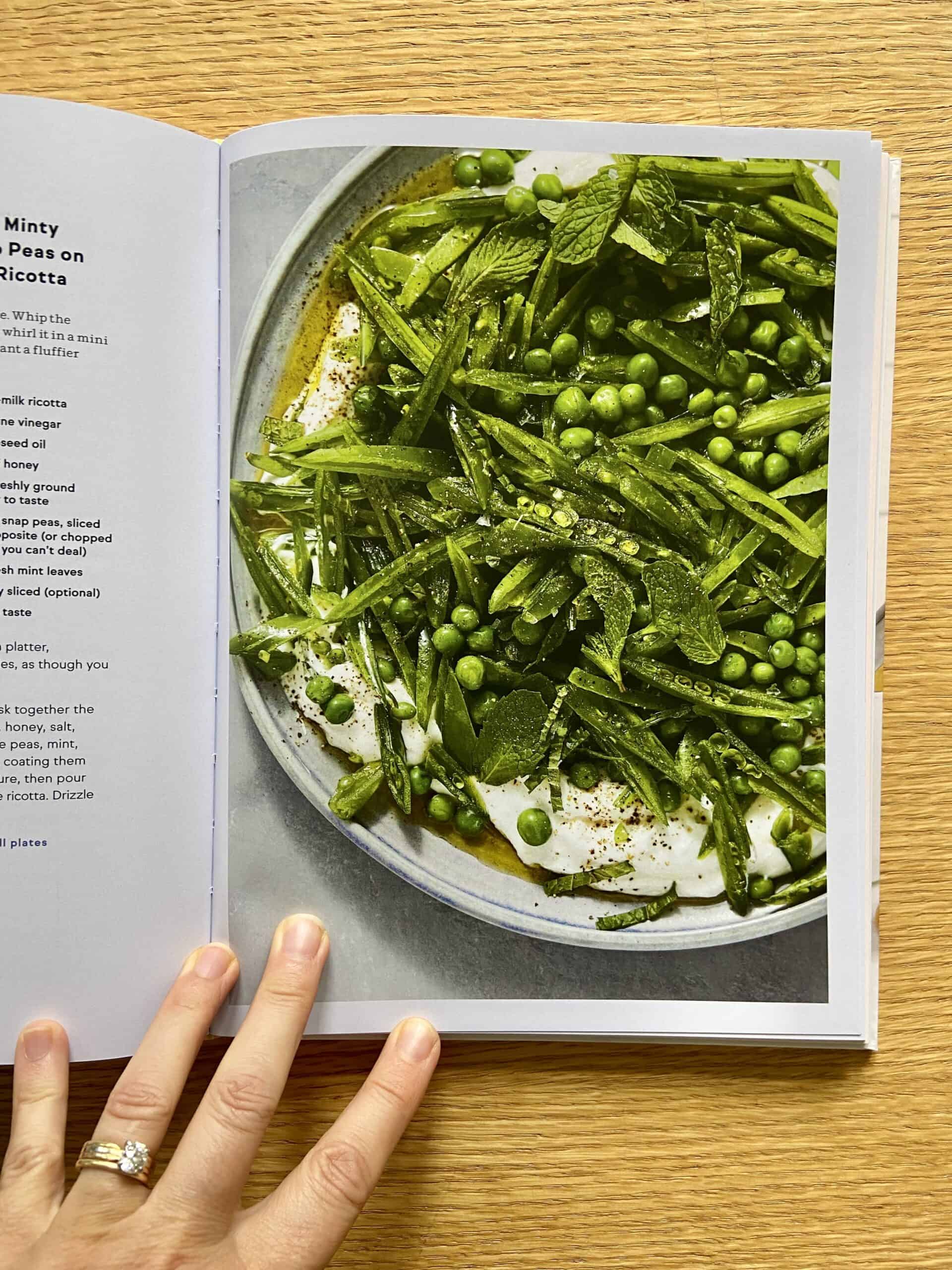 That sounds doable.
This whole book was basically about retraining my brain to the idea of ‘vegetables first.’ I didn’t just want to not eat meat, I wanted to learn how to cook with vegetables and make them the most enticing thing on the plate.

I love the concept of putting vegetables first.
It’s amazing how entrenched it is — at least in my brain — to start with meat. I used to think, Okay, let’s have chicken and what do I surround the chicken with; let’s have burgers and what do we put around the burgers. So, my aha moment was realizing that instead of saying ‘What meat should we have?’ I could think, ‘What vegetable do I love?’ and ‘What vehicle am I in the mood for — a bowl, a pizza, a salad, a soup, a bunch of small plates?’ That makes it much easier to get excited about cooking and centering the meal around vegetables. 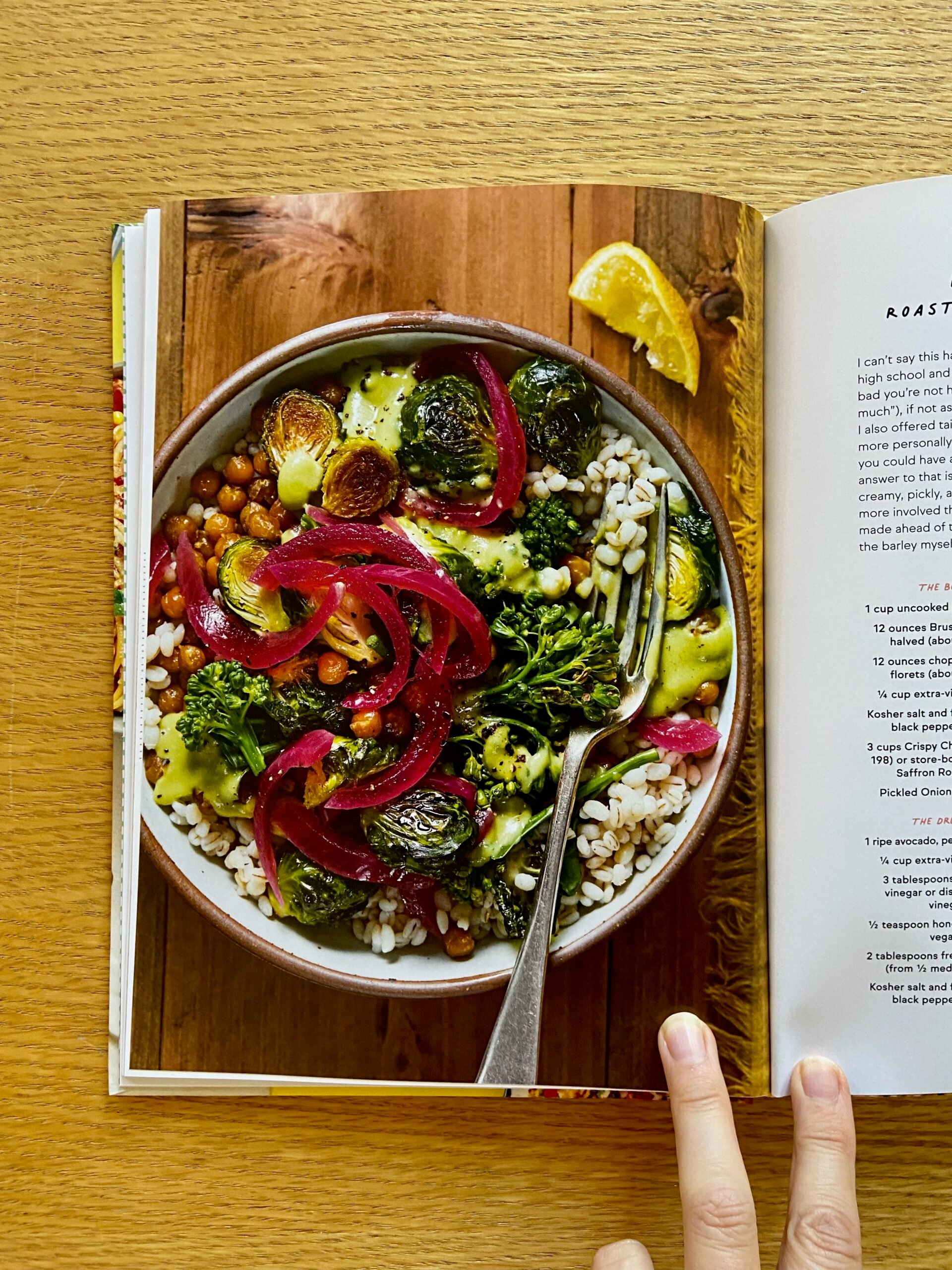 Did any ingredient turn out to be the MVP?
Chickpeas! My kids never liked them before we started down this road — they’d choke down hummus but absolutely could not eat chickpeas cold in a salad. That changed when I learned how to make them crispy. I fry or roast them, and toss in spices, but mostly my kids love them salted. They’ve become my default protein. (Sort of what chicken used to be for me.) You can add crispy chickpeas to grain bowls (above) or salads or just eat them with yogurt and flatbread. So easy.

Any hilarious fails?
Yes, many! My poor kids! We called one attempted dish ‘the tofu massacre.’ Melissa Clark had a podcast episode about shredding tofu. Supposedly when you do it right, it behaves like ground meat. I blame my impatience for not listening to her exact instructions, because when I shredded it, it was somehow all mushy and noodle-y. It was so gross. I also tried doing a fried tofu with buffalo wing spice and it was BRIGHT orange. I was like, I can’t do this. 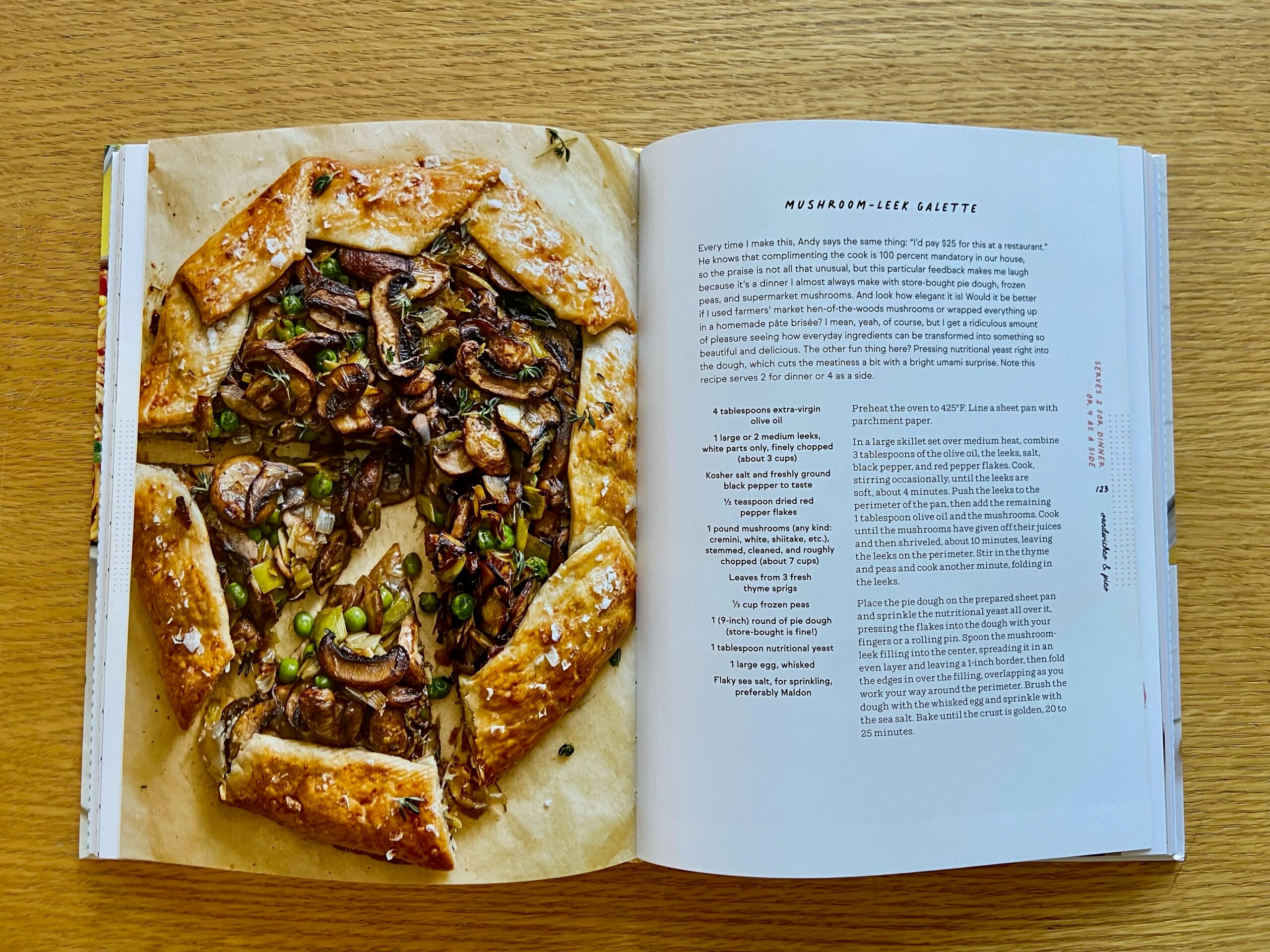 What recipes did your family like best?
Every single time my husband Andy eats the mushroom galette, he says, ‘I would pay $25 for this in a restaurant.’ Which is funny because it’s made from such basic ingredients — Pillsbury pie dough, supermarket mushrooms, frozen peas — but it is so satisfying. 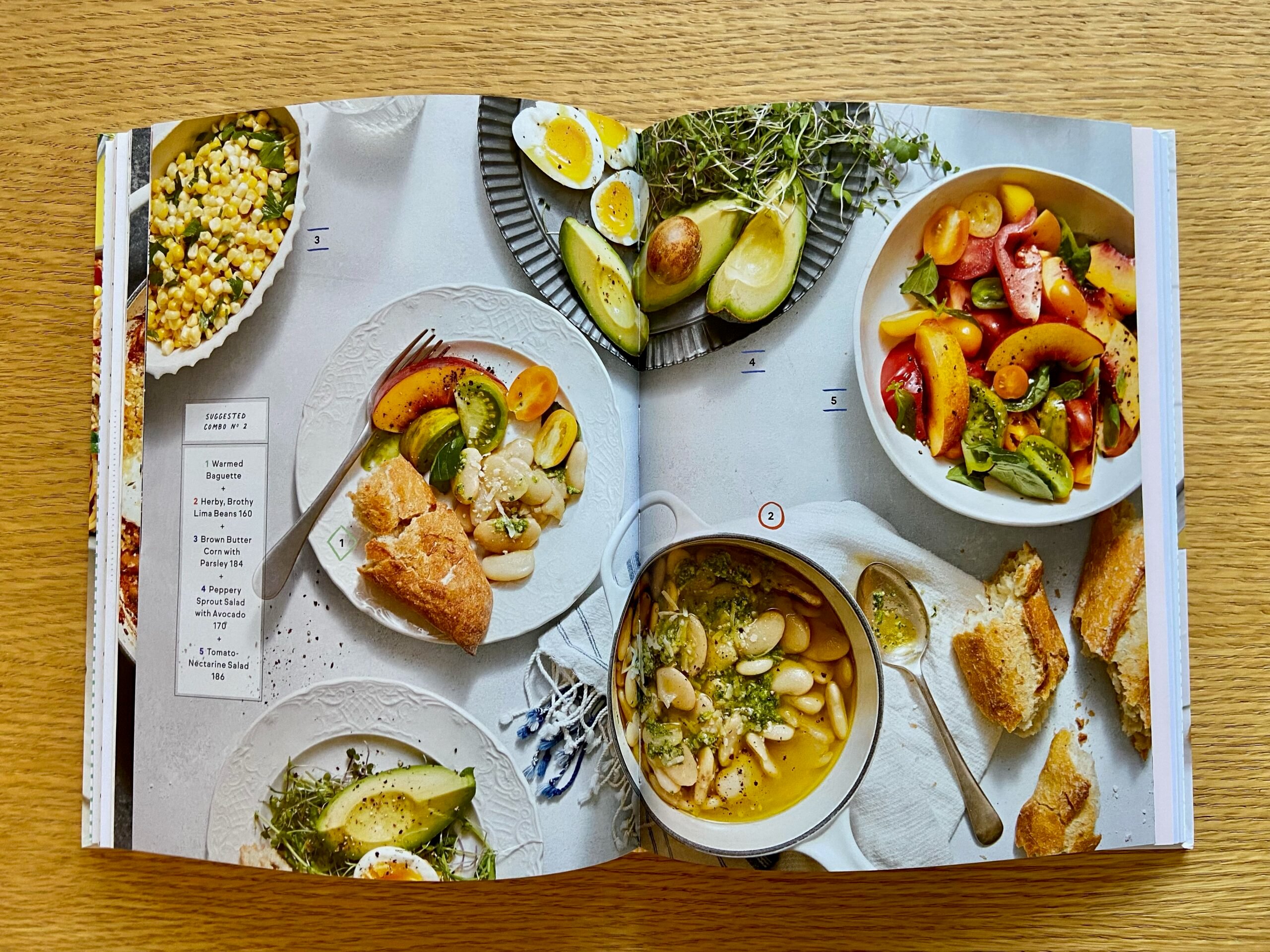 What about your girls?
They love the brothy beans and veggie burgers, which I big-batch on the weekend and freeze. (They’re perfect for that weird meal before or after a late sports practice.) Also, we used to make a pasta with corn, summer tomatoes and bacon. And my daughter Abby was like, ‘Why don’t we try it without the bacon?’ So, now we toss in a cooked-down red onion, which adds a sweetness and depth that is as umami-ish as the bacon used to be. The whole dish so good right now, like today, because corn and tomatoes are in season, and it tastes like summer. 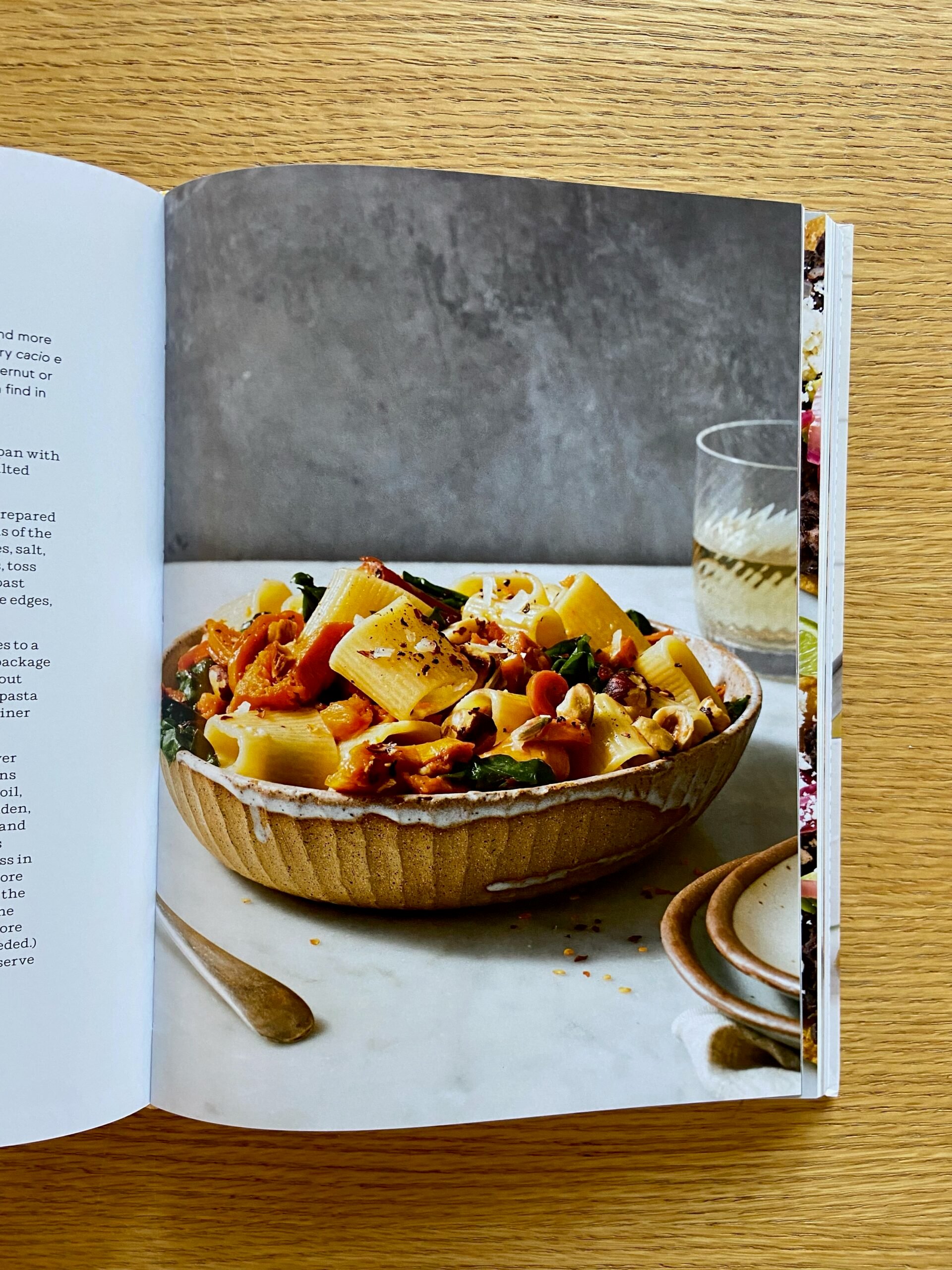 Pop quiz: What would you serve if you were having a few friends over?
The mac n’ cheese topped with chopped tomatoes. Or the rigatoni with honeynut squash, chard and hazelnuts; it looks beautiful with the oranges and greens. Total showstopper, especially in the fall. 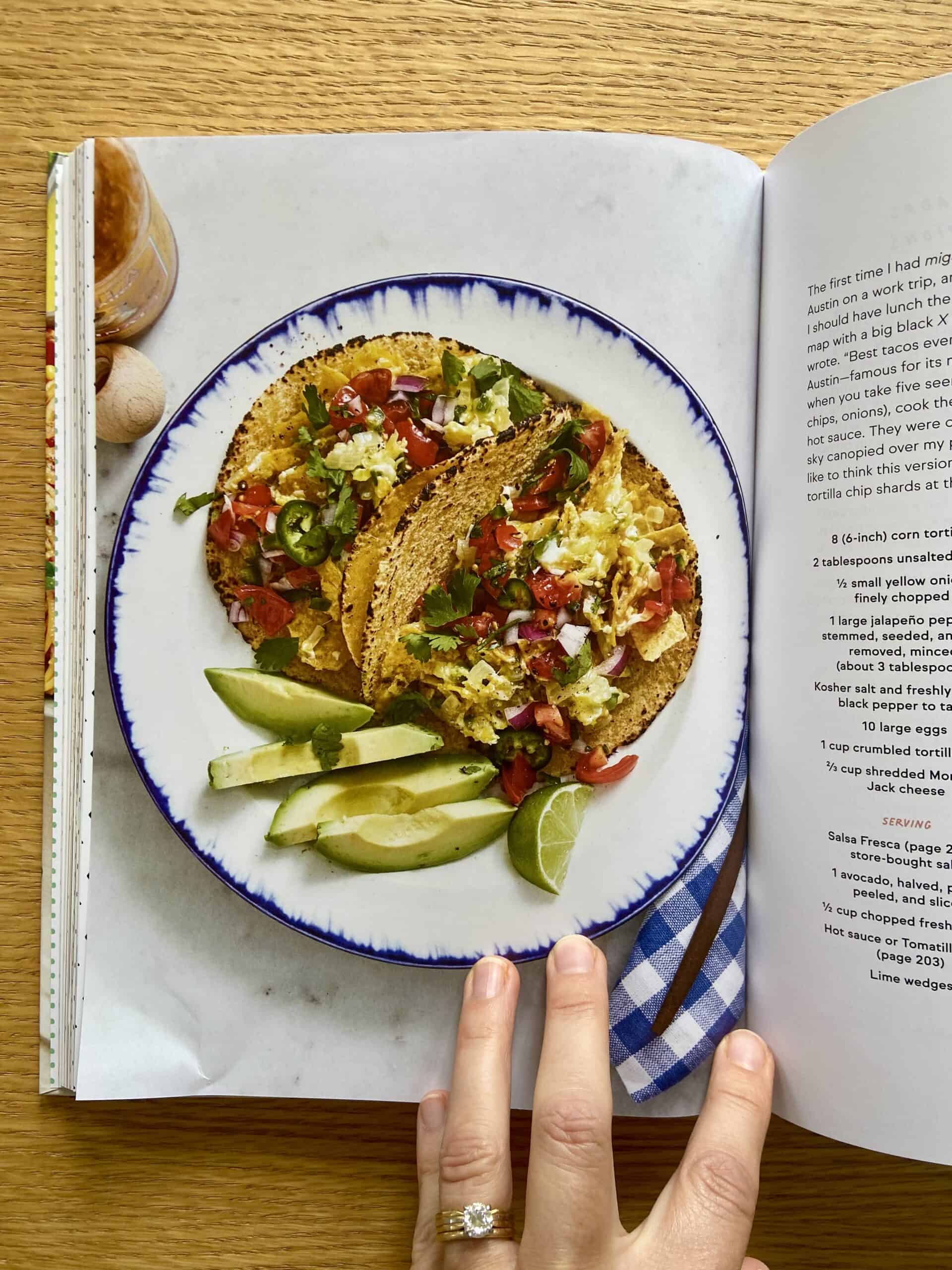 What would you make at the end of a long day when you just want to plop onto the sofa and watch The White Lotus?
Migas tacos. They’re so good and taste a little more special than eating scrambled eggs for dinner.

I’m always curious about book covers. How did you choose your cover image?
We had the idea to show an assortment of plates, and the brothy beans looked ‘cover girl’ worthy. I also wanted something that a parent would see and think, My kid would eat that, so we showed the pasta. And the beautiful sugar snap peas and mint with ricotta up top! I wanted to make sure that people knew that this book was going to be a love letter to vegetables.

Finally, does eating vegetarian on weekdays make you feel different?
Truthfully, there’s a way to eat meat (and all foods) and feel healthy, so I don’t feel different in that way. It’s more that I feel glad I’m doing something beyond the four walls of our kitchen. I’ve always used the dinner table as a safe, almost fictional world where my family of four could feel away from it all — school, work, pressure. But we all kept reading that one of the most impactful things we can do, personally, to affect climate change is to eat less meat, so it feels good to use the dinner table in a bigger, better way. 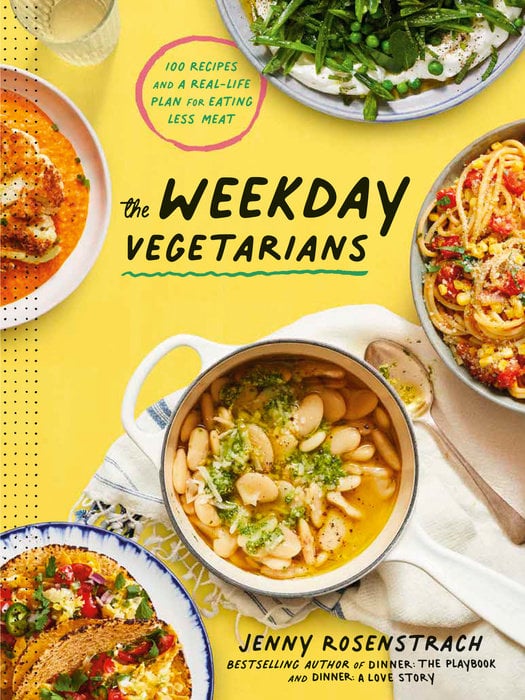 Congratulations, Jenny! Find her wonderful book here. Could you become a weekday vegetarian? Or are you one? Let’s all do it!

P.S. 21 completely subjective rules for raising teenage girls, and how to get your kids to talk at dinner.

(Recipe photos in The Weekday Vegetarians by Christine Han.)