What Was the First Meal You Ate After Giving Birth? 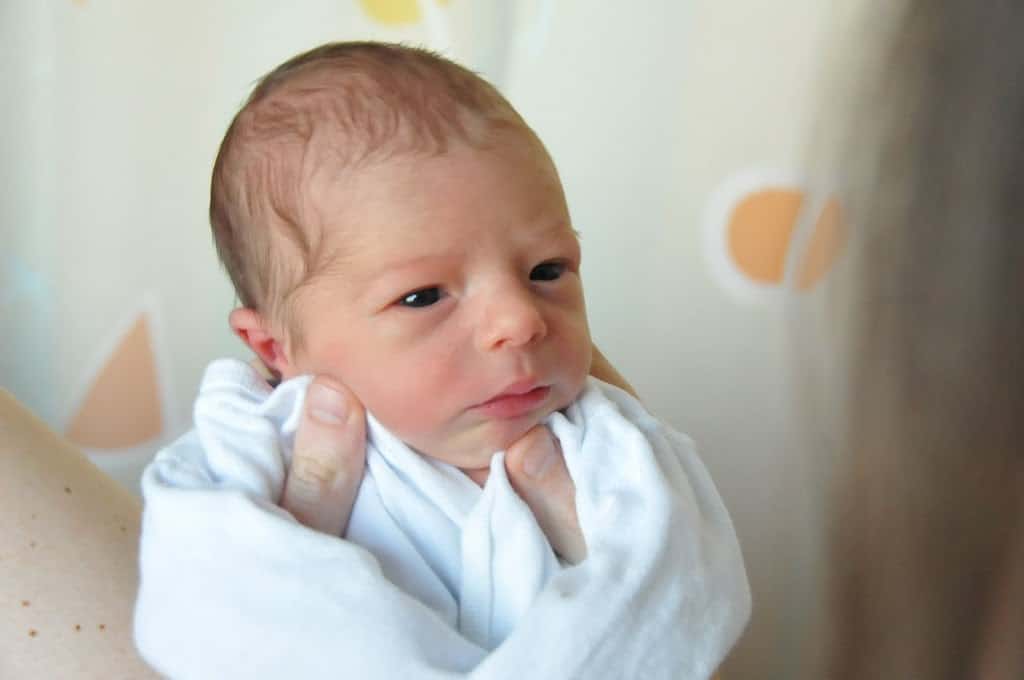 After Toby was born, my friend Abbey visited me in the hospital and brought…

…a bottle of freshly squeezed orange juice. And I can confidently say, nothing has ever tasted as good in the history of the world. It was sweet, bright and completely restorative. I still remember every life-affirming sip.

After birth, all my senses were heightened — plus, I was ravenous from the athleticism of delivering a human into the world! And this seems to be true of other women, too.

“The first bite of a massive sandwich eaten after giving birth is a bite that has not yet been topped,” says a reader named Amy.

In England, the nurses bring you buttered toast and tea, shares a reader named Pam: “Never has anything taste as good.”

Adds Rosalie: “One of my favorite pictures is of me holding my newborn daughter while taking a huge bite of a gigantic Italian sub.”

In her memoir about losing her mother, Michelle Zauner wrote about a Korean seaweed soup called miyeokguk, “a traditional dish for celebrating one’s mother that is also what women typically eat after giving birth.” When she would eat it, she said, “It soothed me, as if I were back in the womb, free floating.” 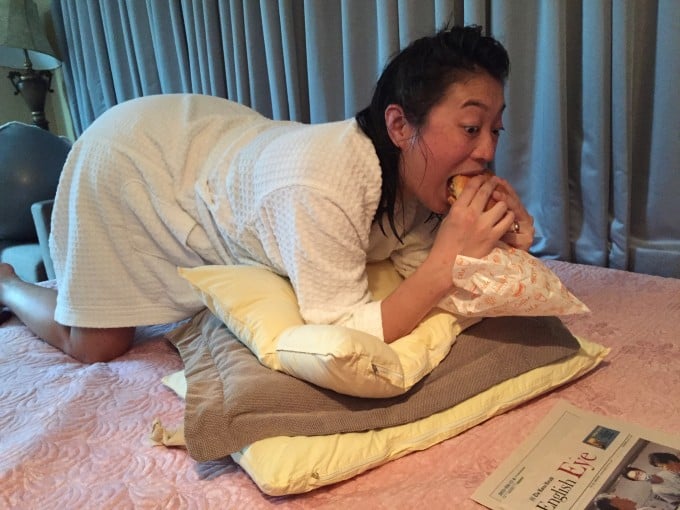 And in her interview about parenting in South Korea, Elise Hu-Stiles remembers meals during labor: “Something I’d never imagined was the intense attention to making sure laboring women and their partners are well fed! For lunch, I got to eat a giant cheeseburger between contractions. They even served me an easy-to-digest chicken congee dish when I was in serious despair, about an hour before push time.”

Now I’m curious: If you’ve given birth, what was the first meal you ate afterward? Was it the most delicious? I’d love to hear…

P.S. 15 things I’d tell a new mother, and being a surrogate.

Tags: personal, toby
513 COMMENTS
WRITE A COMMENT
Motherhood
most popular
01
21 Completely Subjective Rules for Raising Teenage Boys
02
Best of: Parenting Around the World
03
Trying Out Slow Parenting
04
How Did You Know You Were Ready to Have a Baby?
05
Three Transgender Kids Share Their Stories
May We Suggest…
By Joanna Goddard
Motherhood
Pretty Maternity Wear
June 22, 2020

90 COMMENTS
By Joanna Goddard
Motherhood
How Are You, New Parents?
October 5, 2020

668 COMMENTS
By Joanna Goddard
Motherhood
When Did You Bond With Your Baby?
July 19, 2021

We had spaghetti and garlic bread delivered to the house as soon as we got home from the hospital. That was insanely good. My birth was fast, and happened midday. I wasn’t starving afterwards, but had some cut fruit waiting for me. It was the first meal at home that really blew my mind.

With my first born, broth and Jello, after laboring all day after induction and a c section. After my 2nd, a planned c section, I got the hospital meal of “something that is supposed to be stuffed fish” ( the nurses words, not mine!) But, I requested my husband bring me a hot almond latte, and it was perfect!

I was left in peace after the birth to marvel at my new baby, and the amazing care I received in the Canadian health care system. My husband returned an hour later with a large pepperoni pizza and a beautiful bottle of red wine. Heaven!

I labored for 40 hours, tore pretty seriously and lost a lot of blood. And all I wanted afterwards was a salad!???

I’m fourteen weeks pregnant and desperately want a huge cheese and charcuterie board with the works after I give birth. Maybe with something warm and comforting.

My daughter was born late at night, so after I got back to the recovery room, my husband got us Tastykake Juniors from the vending machines. :) My son was born at dinner time. The nurse asked my husband and I if we wanted to order dinner. So, we both ordered a big turkey dinner to celebrate. I remember thinking, “I just gave birth and now I am eating a turkey dinner.” Both wonderful memories. :)

My first baby was born in the middle of the day, and the nurses brought me a turkey sandwich that was, objectively, rather sad. But it was the BEST sandwich I had ever tasted. When I was in labor with my second and got to 10 centimeters and it was time to push (unmedicated), I was thinking, “This is going to hurt too much. I’ll just not push, and stay pregnant forever. Also, I want a turkey sandwich.” I apparently have intertwined turkey sandwiches with the blissful feelings after giving birth and will forever connect the two.
Sadly, my daughter was born in the middle of the night and there were no turkey sandwiches.

Oh man, all of my births were fast and furious. I remember my 2nd I had delivered in triage (thankfully) not the car after a snowstorm, they brought me a pb&j sandwich that tasted so good and a cranberry gingerale mocktail. To this day after a hard work out that is what I crave!

With my first it was whatever the hospital had-probably crackers and cranberry juice. My second we had a doula who knew what to order from the cafeteria. She fed me an omelette immediately after birth and then a double cheeseburger a few hours later. With a coffee shake. I didn’t feel hungry at all after either birth so it was imperative that someone else decided I needed to eat.

I’m an American who just gave birth in a rural German hospital a few weeks ago. I was starving as I anticipated that beautiful first meal. When they walked in with a tray of 2 cold cuts, a piece of rye bread, and a pickle, I just had to laugh. Ah well.

after my daughter was born in May, I had a hospital-made grilled cheese and tomato sandwich—it was divine!!

I gave birth relatively recently (December 2020) and have no memory, ha! I delivered in the middle of the night and got to the recovery room as the sun was rising, so I assume it was something from the hospital breakfast menu, but I seriously can’t remember.

Tea and toast for me too. Vegemite of course because I’m Australian. I’m an emergency physician and it’s also what we give people on the worst day of their lives, to people who have nowhere to go but our waiting room, or to ourselves at 5am when we can take a break from the relentless night.
That tea and toast was wonderful but that first shower – realising what had happened, being able to take a deep breath for the first time in months was SUBLIME!

When I gave birth to my daughter my mother and partner were in the room with me and my father was waiting outside. When he came in after she was born we had the kind of incredible transcendent moment you can only dream and hope for where he met his granddaughter for the first time as she lay on my chest and we cried and called my grandmother (his mother) for whom my daughter is named—which my partner and I had kept to ourselves until she arrived and it was certain that the name fit. Then after all of that hubbub and heart-lightning bolts I realized I was STARVING and my father said “I have a biscuit in my pocket, would you like it?”. He had stopped and picked up a warm, buttered southern biscuit on the way to the hospital and had it tucked in his blazer pocket *just in case* and he pulled it out of his pocket, nestled in its greasy paper, like a magician. It is likely the best thing I have ever eaten and my heart felt infinitely full and deeply cared for. We tell the story to my daughter and she very often requests to “hear the story of ‘Grandaddy and The Birthing Biscuit'”.

My friend brought me sushi and beer! She brought so much sushi that we shared with the nurses!

Just gave birth 2 weeks ago! I labored for 36 hours with no food and then had a c section so I had to be careful with what I ate in case I got nauseous …hospital apple juice and orange jello never tasted so good!!

My good friend was keeping tabs on me during my delivery and when I got home, there was a freshly baked bread (still warm, somehow!) on our doorstep with honey butter. It was the most glorious, delicious food to come home to. My husband took a photo of me standing in our hallway eating it in my nursing bra and those disposable underwear from the hospital! The best. ❤️

The most amazing Double Layer Chocolate Cake at MGH, Boston – still dreaming of it a year later

I gave birth around 4:30 pm. By the time I got to a room, dinner was over. I was starving. The nurses scrounged up a peanut butter sandwich for me. It was the best meal ever.

A BLT and a chocolate milkshake, right before the cafeteria closed :) My other sweet food memory was coming home and my mom had baked fresh cinnamon rolls so the house smelled amazing. It was a tip from their grandparents class, which I just love and think is so wonderful.

Wow it is adorable to think of them taking a grandparents class!

Best meal was after my first two – each time, my husband went to my favorite Thai restaurant and brought me back alllllll my favorites: Tofu satay, spicy noodles, tom kha soup. I inhaled it all. Giving birth in a new city to our third child, my heart wanted to the same flavors. My husband asked the nurses and- lo and behold -he found (our now favorite) Thai restaurant. I felt so touched that he remembered and wanted to recreate this for me.

I’m from Western Australia and after 15 hours of induced labour and a 2 am emergency cesarean section, my beautiful midwife bought me a HUGE plate of buttered white bread vegemite toast at 4 am. I’m quite sure that toast will never taste as good!! I still dream of how good that toast was and I’m sure the thought of it will get me through future pregnancies!

The midwives who expertly guided me through the pregnancies and births of both my children are huge advocates for healthy eating during pregnancy. I ate so well while pregnant — lots of veggies, whole grains, very little sugar, etc. Even before I arrived at the hospital to give birth to my first, I was already dreaming about the greasy burger, fries and milkshake my husband was going to get me from the tasty burger joint around the corner. And after 41 hours of labor, it was well-deserved and so delicious!! We ate it again for our next meal, too ;)

I just gave birth on Tuesday – Baby is 3 weeks early so we weren’t completely ready for him, it’s been a blur and a bit (a lot) overwhelming and I feel like I’m in survival mode right now, just eating whatever’s quick and available without paying attention to what it is.