On Being a Surrogate 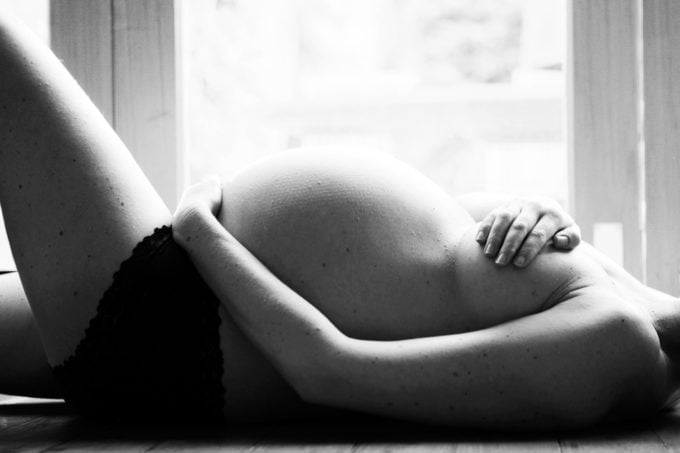 My brother Andrew and his wife Catherine live in Scotland with their six- and four-year-old daughters. For years, my sister-in-law’s best friend Reena was also trying to have a baby. Reena got pregnant seven times, but would miscarry before she was eight weeks along. Although she could produce an egg and grow an embryo, her womb couldn’t handle carrying the pregnancy to term. Her doctor suggested surrogacy, but for a long time she continued to try on her own.

Reena was led down many heartbreaking, circuitous paths before she could accept her reality. By this time, however, she was 45 and no longer making strong enough eggs. Luckily, she had frozen two embryos a few years before, and now they were her last chance. Though Reena never asked, her best friend Catherine, 42 at the time, volunteered to be her surrogate. Today, Reena and her husband Mark have an 18-month-old son named Hari. Here, we spoke with Catherine about her selfless act of love…

How did you decide to be Reena’s surrogate?
I knew all about Reena’s difficulties. One afternoon, I was sitting there talking with Reena about her quest for surrogacy and in my head I was like, I fit that bill. I didn’t want to say anything at first, because I hadn’t yet discussed it with my husband, but I thought, I could carry this child.

When did you bring it up with your husband?
Andrew and I were on vacation, at a beach cottage on the edge of Scotland. We were having dinner, and I said, “I’m thinking about offering to be a surrogate for Reena because I tick all the boxes and I’ve had really easy pregnancies. Why wouldn’t I do that?” And Andrew was like, “Yeah, that is a great idea, you should totally do it.” It was as if I had said, “Should I go get some more wine out of the fridge?” It was that casual. So I sent Reena an email with the headline, “This Email May Change Your Life,” and she called me in tears.

What happened next?
They defrosted Reena’s embryo at the clinic. It could have died while defrosting or it could have replicated, which it did. This meant it was alive and wanted to grow, so that was a good sign. They put it inside me and within 48 hours, I was sure I was pregnant. They kept telling me you couldn’t know for at least 10 days. But I knew. I felt pregnant!

How did you feel during the pregnancy?
I was confident that if I got pregnant I would deliver the child because I had never had any problems. I was like, this kid is not going anywhere. For Reena, since that hadn’t been her experience, she worried every step of the way until the baby was in her arms. She came up to Glasgow for every major scan and appointment with the doctor. But I knew, with my womb, my hips (they’re massive, I mean have you seen me in a bikini?), I will take this thing over the touchline, no question!

Did you bond with the baby when you were carrying him?
I’d tell him, “We are going to be really good friends, you’re going to meet your mom very soon.”

Were Reena and Mark with you during the birth?
I had an elective C-section, which is typical for a surrogacy. Reena and Mark were there. The anesthesiologist walked me through everything, saying “This is what is happening now, you are going to feel this now…” It was so reassuring. I loved that woman. When it was over, they washed off Hari, wrapped him up, and gave him to Reena. We went back in the delivery ward, the nurses made us all cups of tea, Reena was holding him, and it was a really magical moment. It was the end of a journey for me, and the beginning of a journey for her.

Did you both stay overnight in the hospital?
Leading up to the C-section, we asked the hospital many times to make sure Reena could spend the night at the hospital. They said, “We’ll do our best, but there isn’t a legal right for her to be there.” But I was really adamant. “I am not mothering this child, because he is not my child, he is her child. It would be emotionally unfair to everyone involved if I spend the night feeding him.” Luckily, in the end, we got a room. Reena slept on a pullout couch next to me and took care of the baby all night. I basically watched her turn into a mom. She didn’t know what she was doing (like any new mom), so she would do what she thought, and occasionally ask me and I would tell her, “I’m not worried about that” or “You could pat him on the back…” It was the most beautiful night of my life in many ways.

Were there any hard parts?
The hardest part physically was after I gave birth to him, my boobs went into overdrive and wanted to feed him. But I wasn’t; Reena was giving him formula. It was so painful, I had ice packs, and it was terrible. In the first few weeks after Hari was born, Reena also had some insecurity about not carrying him. She wasn’t breastfeeding, so she would sometimes say, “I don’t know that he knows I am his mom.” But he did.

What about emotionally?
After we left the hospital, we all came to our house and drank this amazing bottle of vintage Champagne. Then they took him in the car back to their flat and there was a little bit of me that was like, “Oh, he’s gone now.” I did feel that. Also, because I wasn’t taking care of a baby, and my body was obviously expecting me to be, I went through a period of feeling a little lost after the birth. Everything in my body, my hormones, were telling me that you’re going to breastfeed and cuddle a baby, but I was back at work. That was something I wasn’t totally prepared for and it probably took about three to six months to get over.

How was Hari’s name chosen?
Reena and Mark wanted to find something that was both Indian (her background) and Welsh (his). We spent ages going through websites together, it was fun. When we came up with Hari, Reena’s dad said, “Hari is not actually a name.” It means “god,” “holy one,” or “sir” in several ancient languages. But we all really liked it and then we discovered that Hari means “gift” in Gujarati and we knew that had to be his name.

How did you explain the situation to your daughters, Sadie and Bella?
I told them that Reena was my best friend, and her tummy didn’t work, and that I was going to use my tummy to help her have a baby. They really love Hari. And bizarrely, he has a sort of intrinsic love for them. He just follows them around like they are the coolest things. I do think for whatever reason, spiritually on some level, they are connected in a way that they wouldn’t be otherwise. I can’t explain why, but they seem to all feel it. It’s lovely.

Has your relationship with Reena changed?
We’re definitely even closer — now I feel like I can impose on her like a sister! Her family sees me like a cousin. I get invited to family dinners; her mom gives me marinated chilies every time she makes a batch. It brings you into the fold, definitely. They weren’t going to have a grandson until I bridged the gap for them and they really appreciate that — and I really appreciate the chilies. No, I really do! They’re amazing.

What do you think looking back on the experience now?
It’s one of those things that when I die, I hope it will be mentioned in my eulogy. It’s rare that you do something in your life that you know will make the grade. I feel proud of it, and I also feel proud that Reena and Mark are parents now. Nine months of your life is nothing, but now they are parents forever. 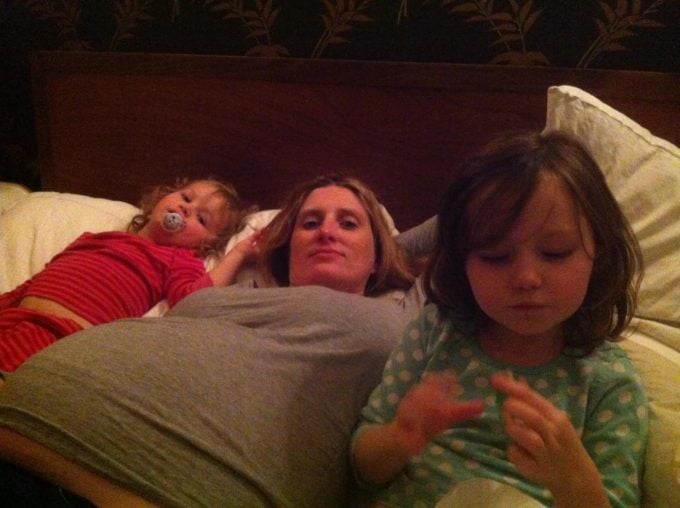 Catherine, with her daughters, when she was pregnant with Hari. 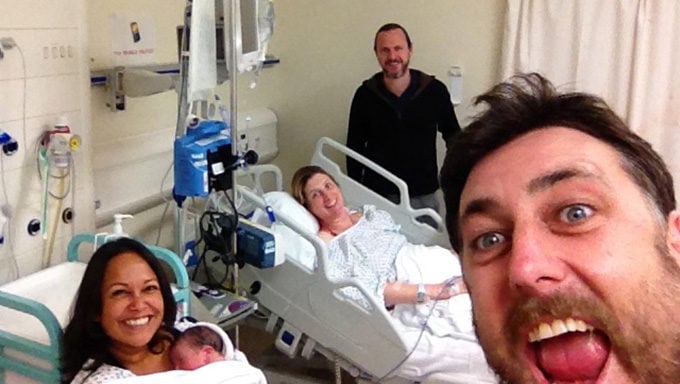 Reena (with Hari), Catherine, Mark and Andrew in the hospital. 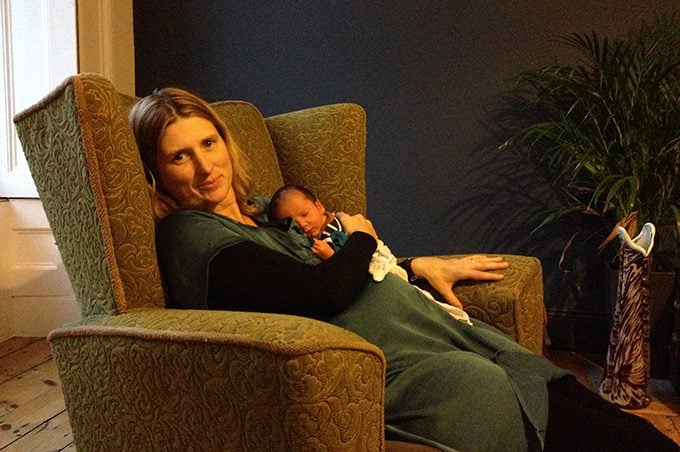 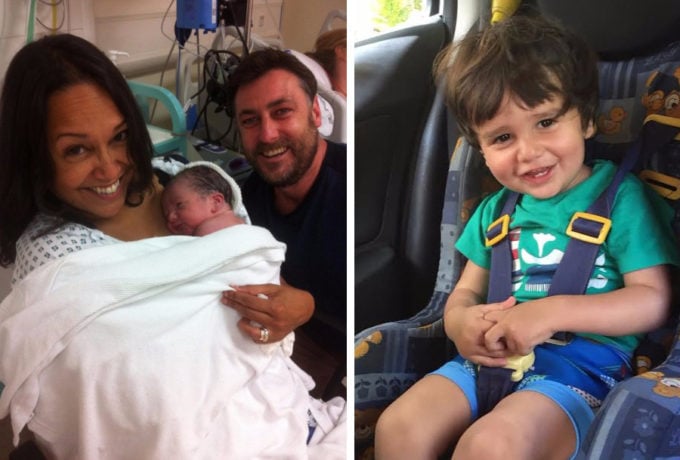