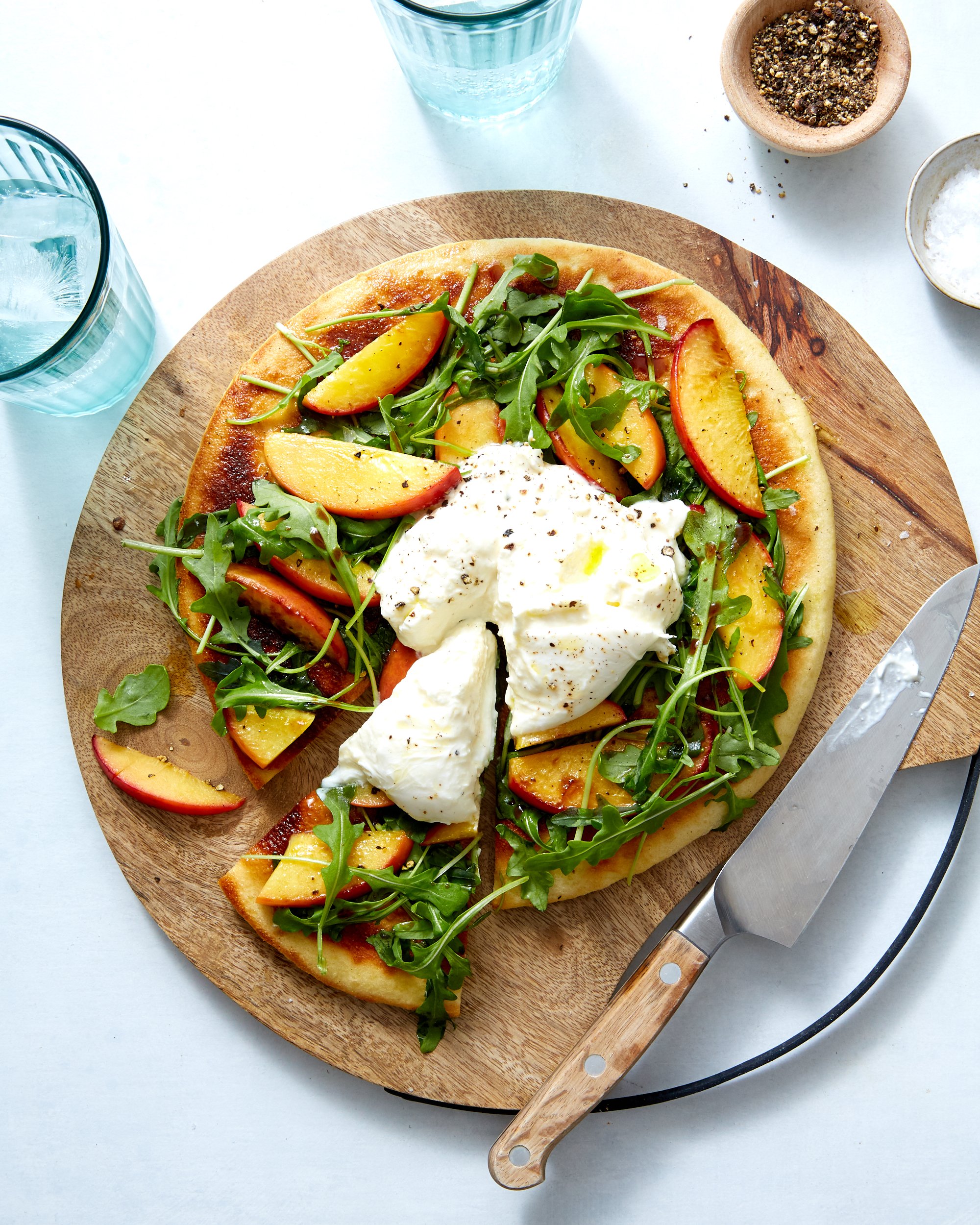 I’m so happy to announce our third annual five-ingredient dinner series, where we showcase simple, satisfying recipes from readers…

As soon as I saw this pizza, submitted by a reader named Maura L., I knew that it would be a perfect way to launch the series. To begin, we’re in full-on peach season, and if you’re like me, you are probably trying to think of as many ways as possible to work stone fruits into your daily eating. Says Maura: “This recipe not only has summer flavors, but it’s also a good solution for when it’s too hot to turn on the oven.” Hear that everyone? It’s a pizza that does not require turning on the oven. Maura favors grilling her pizza, sometimes using a stone on the grates, sometimes just directly on the grates, but I found it’s even simpler when pan-fried on the stovetop and doesn’t lose any of its quintessential summerness. Thank you, Maura! 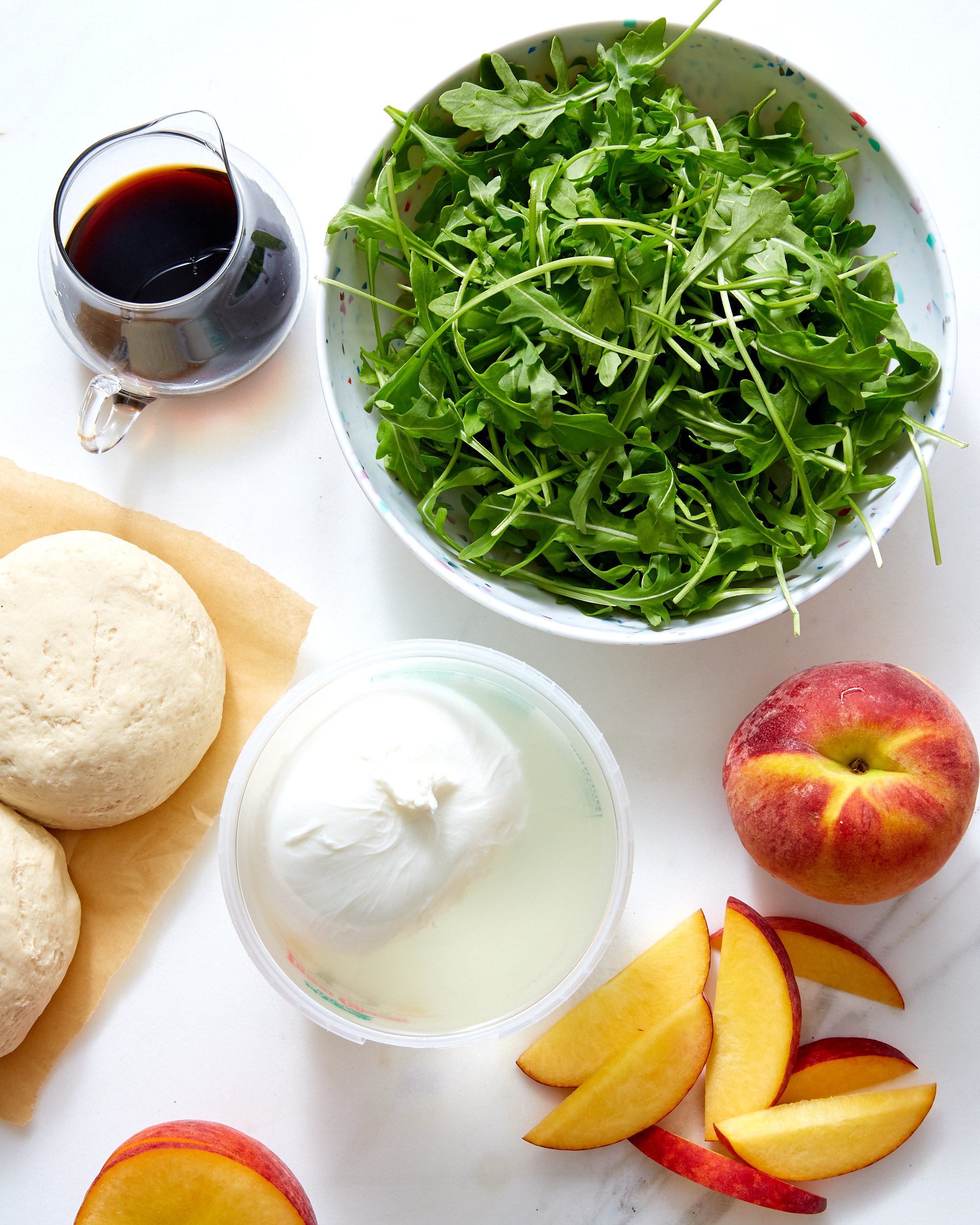 Arugula-Peach-Burrata Pizza
Maura mentioned that if we are not opposed to using a sixth ingredient, she’d recommend a little roasted garlic spread on the finished dough. “It keep the peaches and balsamic from getting too sweet and helps meld the flavors,” she says. Maura also advises letting your store-bought dough come to room temperature, and if you’re grilling, coat the dough with olive oil and and sprinkle with cornmeal to help prevent sticking.

Add 1 tablespoon olive oil to a medium cast-iron set over medium heat. Add peaches and cook five minutes, until they have broken down a little but still hold their shape. Remove to a plate. Add 1 piece of the rolled-out dough to the same pan (loosely cover the other piece of dough with plastic wrap or a clean kitchen towel). Cook for 2 to 3 minutes, until the dough is bubbly on top and brown underneath. Flip and repeat on the other side. Remove to a plate and tent with foil and repeat with the second piece of dough.

Place cooked doughs on cutting boards and divide the arugula, peaches, and burrata evenly between the two. Drizzle with balsamic vinegar, more olive oil, and a sprinkle of salt and pepper. Slice and serve.

* We aren’t counting olive oil, salt or pepper as ingredients.

P.S. More five-ingredient dinners including this classic shrimp with feta.

Ughhhh YUMMM. Made this tonight. I live in the south and GA peaches are so ripe right now so was so excited to see this recipe posted! I used TJ’s garlic and herb pizza dough cause that’s all that was in stock and it leveled this pizza UP. Also used TJ’s burrata. This was quick and summery and delicious. Will definitely file this recipe under quick summer dinners. Also, in response to the post above – southern girl here and I have never peeled a peach except when making homemade peach ice cream. I for sure think it’s an unnecessary step.

We made this tonight—my husband made it actually–and it was delicious!! A great use for those luscious peaches at this time of the year.

This sounds and looks so delicious!

Made this last night, and it was delicious and so easy (one switch, I used fresh ricotta – delicious – because I couldn’t find burrata).

The only issue was the pizza dough. I don’t have much experience with making homemade pizzas, and although the crust browned nicely in the cast iron, it was a bit thick and didn’t seem fully cooked through. Any experienced pizza makers out there who can share tips for better crust results? Thanks!

This is beautiful and I would gobble that down in a heartbeat, but in my brain salad! lol (but seriously, thanks for sharing! I need to try to make this!!)

I just bought some (in San Francisco for $7). It must be cheaper in the states.

Even here in my northern Italian town it costs €10 at the farmer’s market(!). However when I go to southern Italy, where it’s typically produced, it’s much more affordable. (And even more delicious!)

Beautiful dish, and seems healthy! May I ask if you can post nutrition facts for this or any others in the series? I think it would make the recipes more available and easy to add into the mix if there were information in this area :). Protein, carbs, fat numbers particularly – macros!

I am from the south, and would never eat a peach with the peel on it because it’s so fuzzy! Is this a regional thing? Are what you’re calling peaches closer to what I know as nectarines? Have I been creating lots of unnecessary work for myself peeling peaches? Has anyone ever had this many questions regarding peach peel?

I grew up with both northern and southern family – and have never peeled a peach in my life! Totally not necessary! (And yes peaches are different than nectarines but I actually like eating peach skin more!)

I think it depends on the type of peach you get, K. I wouldn’t eat the peel on a July Prince, but if you got one of the really thin-skinned white flesh peaches you get at the start of the season you could probably just scrub them and cut them up.

(I’d still peel it though personally…)

This has been a debate between my husband and I since we met, lol. I peel them (cannot eat the skins), he says I’m creating work for myself ?, I say they are much more enjoyable! Personal preference for sure!!!

Hi K, my Grandma had peach trees in Washington state and we always ate them with the fuzzy skin on so for me it’s the opposite. I feel like peaches are so slimy when peeled. It might be a regional thing indeed. Peaches are such a HUGE Grandma memory for me. Warm, ripe, huge two-handed peaches dripping juice down our arms, we’d eat them right from the trees in my Grandma’s orchard. :)

Opposite here! I never see people eat peeled peaches that are fresh . I only see the skin removed if it’s an ingredient for things like ice cream, jam or something that needs to have a smooth texture.

I think the rule of thumb is to do what you like. Personally I always peel but what matters is what is enjoyable to you.

I’d also suggest a little prosciutto if you want to balance out the sweetness, and if you feel like adding an ingredient!

Ok, I need recommendations on the best pre-made pizza dough, people. What do we think? I am not the biggest pizza fan because so often crusts just taste like styrofoam/no flavor. I really want to make this, tho.

If you have one nearby Whole Foods has amazing dough! We like the white, the wheat and the Stout (the best). If you don’t see it out, just ask at the pizza counter. Freezes beautifully also.

If you live near a Publix (those might just be in the South?), their pre-made dough is great! Trader Joe’s is a good option, too, although I think Publix is better.

Trader Joe’s also has a great option! I’ve found the key to the TJ’s dough is letting it sit out for the recommended time, and keeping it thin

Do you have a local pizza place you love? They’ll often sell you some dough!

Alexandra Stafford has a lovely, easy recipe for (no knead) peasant pizza dough:

My husband and I have been making homemade pizza weekly for years now, and Whole Foods has the best dough! We always get a few and stash the extras in the freezer – just put them in the fridge overnight to thaw.

This looks DELICIOUS!! Making ASAP, thanks for sharing!

Will be making this with our local peaches and my backyard arugula. Also, thanks for the many recipes featuring this spicy and versatile green! It’s abundant and easy to grow even in a patio container.

Am I allowed to make this for lunch right now?!?! YUM

Update, I did make it for lunch:)

This is the best series of comments! Hope it was a great, lunch, K!