What Music Are You Listening to These Days? 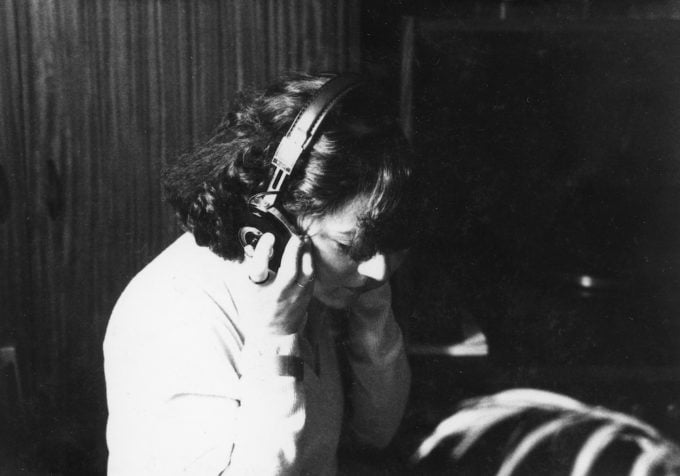 Over the last few weeks, the same thing keeps happening…

Nearly every call or meeting on my calendar gets cancelled at the last minute. In every case, the person has cited “personal reasons,” with varying degrees of detail. The honesty felt both refreshing (I’m not alone!) and disheartening (everyone is having a hard time). The truth is, while the schedule changes are frustrating, in nearly every case, I’ve been relieved. In many ways, it seems we’re all in need of solace that the world isn’t offering.

But, along with deep breaths and warm beverages and occasional walks in the sun, one small thing has helped.

Right around the election, I made a playlist called “Joyous Day” — on a day that was decidedly not joyous — in the hopes I might trick my brain into believing I felt good. There are songs like “Don’t Stop (Thinkin’ About Tomorrow)” by Fleetwood Mac and “This is the Day,” by The The, which promise change is on the horizon, along with ridiculous tunes like “The Final Countdown” by Europe (also known as “that song G.O.B. from Arrested Development plays when he performs his magic“). I listen to it in the morning, as I’m brushing my teeth or drying my hair, and though it doesn’t change my immediate circumstances nor those of the world around me, it injects a little sliver of absurd positivity into my day.

This morning, a friend who got the vaccine texted me to say she was listening to “Found a Cure,” by Ashford & Simpson, a hopeful anthem for today.

Though we’ve known it for centuries, research now supports that music has the ability to soothe frazzled nerves and lift sagging spirits. Listening to music (particularly classical) can actually impact the body’s stress response, while upbeat music is sometimes suggested as a way to help lessen anxiety and depression, and even physical pain.

If anything, I feel a little silly that I’ve gone this long without creating dedicated playlists for various moods. I’ve turned to music to help me through long runs, keep me alert during giant tasks, and get psyched up before big events, so why not on a random Tuesday? To quote Dumbledore, “Ah, music. A magic beyond all we do here!” Right now, I’ll take all the magic I can get.

To that end, I’d love to hear what music you’ve been turning to these days. What do you listen to when you need a pick-me-up, or to help you calm down? Are there any songs that help you feel better?

P.S. Tiny anchors and what’s on your workout playlist?

304 COMMENTS
WRITE A COMMENT
Design
most popular
01
My Sister’s Home Makeover
02
What Are Your Top Three Books?
03
The Ultimate TV Guide (If You’re Looking for Something Great)
04
Catherine Newman’s House Is a Joyful Jumble of Books, Games and Cats
05
Behind the Scenes: Making a Magazine Cover
May We Suggest…
By Kelsey Miller
Design
An English Home With a Beautiful Blue Kitchen
April 28, 2020

Fall Out Boy is always my go-to artist whenever I’m feeling down! I could go on about how amazing their whole discography is! Here are my favorite picks:

-What a Catch, Donnie!
-I’m like a lawyer with the way I’m always trying to get you off
-The Kids Aren’t Alright
-The (Shipped) Gold Standard
-Bishops Knife Trick
-Miss Missing You

Then I’ll mix up some Panic! At the Disco and Kenshi Yonezu songs :)

Been Listening to a lot of Rudimental recently. I love their sound.

Whenever I need to lighten up my mood, I just listen to Disney songs. Mostly from the animated movies, then the next thing I know, I’m singing along to the songs and my sour mood is forgotten.

this is so cool. Thanks for sharing this

Crowded Table by the Highwomen. It makes me long for our post-vaccine world. Highly recommend.

Great music to work to (lady musicians too!):

Rediscovering my love for Filipino music and have been binge watching music videos on YouTube. The latest music I heard is Yearly by Ex Battalion.

I have been listening to Don Thomas; lovely acoustic guitar, melodies intended to be soothing. When I put on his CDs, I can immediately feel the tension washing away. I have his four seasons CDs: Spring, Summer, Autumn, Winter, and I put all four on and listen to hours of his gorgeous music. I will try to put a link here: https://donthomas.com/ I highly recommend him for anyone who needs some calming music! PS Thanks for some great suggestions above!

Early on in lockdown, I was missing friends and family (like everyone else) and decided to make a playlist for everyone, using the #1 billboard song on their birthday from birth to now. Some, like my 13 year old niece were familiar pop songs. Others, like my 87 year old grandmothers were songs I had never heard of (and went beyond billboard recording of #1’s. I had as much fun creating the playlists as I did sending them out to everyone. It was a great walk down a musical memory lane and sparked a lot of great conversations!

I love that idea!

For feeling joy from a single song:
Lovely Day -Bill Withers
Tuesday Heartbreak – Stevie Wonder
really anything by Stevie Wonder, he finds joy in all of it.

For some reason, when spring and sunnier days hit, I find I reach for retro tunes, the music my parents listened to when I was a kid…Herb Albert, Burt Bacharach, The 5th Dimension, Andy Williams…and 60’s folk music…the Limelighters, Brothers Four, Kingston Trio, Peter Paul and Mary….comforting, nostalgic and soothing.

What a great post – I’ve been enjoying checking out people’s recommendations. I love this topic, and there’s nothing I love more than discovering an amazing new song/album that I can’t get enough of, and sharing it with my friends and family.

As a twenty nine year old, music not only transports me out of myself in the moment, but it has also become a marker of time and places throughout my life. Certain songs take me back to elementary (Hit Me Baby One More Time), junior high (Yeah – Usher) high school (Sexy Back – JT). When I met my now-husband at the age of nineteen, his deep reverence for music showed me a whole new world beyond what the radio fed me. We would go for long drives together and ventured through all the John Mayer, Death Cab, and Bon Iver albums. To this day the self titled Bon Iver album is one of my all time favorites (recommend listening to in-order and LOUD).

A few of my emphatic recommendations from the past year include:
– Alicia Keys’ Tiny Desk Concert – I randomly put this on in the background while working (another) late night. I have never been a huge fan of her music, but watching this concert, I was immediately uplifted by her spirit. She is POWERFUL and I was brought to tears by the end when she sang Fallin’.
– HAIM’s Women in Music Pt. III was my album of this summer. You can easily throw this on and listen all the way through – over and over.
– Taylor Swift’s Folklore was a close second for album of this summer
– Red Garland’s Piano – perfect jazzy background music for working
– Ludovico Einaudi’s In a Time Lapse album. He is an incredible pianist, I love listening to the first several songs of this album (in order) while working. Make sure you listen to the song “Life” and let it sweep you away
– You’ve Got Mail soundtrack – the first song “Butterflies in the Subway” gives me Toy Story vibes, need I say more?
– Lake Street Dive – this band is so talented, and the lead singer, Rachael Price’s vocals are other-worldly.

Most Tuesdays, I try to go to Happy Hour via Zoom hosted by an L.A. based organization, Salastina. The Happy Hour is free, although they happily accept donations to pay musicians. So far, I’ve discovered a jazz harpist, Hilary Hahn, a violist, etc. I highly recommend it!

I’m loving all of these music recs! Definitely been listening to a lot of Waxahatchee “St. Cloud”… probably my favorite album this past year.

I’ve got a question and would love some input. Does anybody have album recommendations to have on in the background when you have a friend over for dinner and don’t want it to be distracting, but also want to have a good vibe? For some reason I always stress about this… thanks so much!

I put on Amy Winehouse, Lana del Rey, or Ella Fitzgerald. I have a small but growing collection of records and I like(d, in the before times) to ask people to pick one out and put it on while I finished in the kitchen. People are funny, so I feel like giving them a choice is a nice thing to do. Like, I think Miles Davis is great dinner music, but some people just haaaaaate jazz the way some people just hate cilantro, haha

Great question. Me, too!

For kids, check out Betty and the Turnips!
Great songs about outdoors.
https://www.youtube.com/results?search_query=betty+turnips
The ‘Turnips’ are whoever ‘turn up’ to play with her that day.

I have a Spotify playlist of songs that were released over the last year (or thereabouts) that I call the Quarantine Mix. I didn’t plan for the mix to have a specific mood—these were just recent songs I enjoyed by artists I love—but boy does it make me FEEL FEELINGS whenever I put it on.

Since this is a judgment-free zone, I’ll chime in:

In early March, my “pod” and I rented a house in Sea Ranch, California (a few hours drive from us), and the four of us (all adults) ate mushrooms and lounged around listening to Vivaldi. It was PURE MAGIC.

Now, I’ve been listening to Vivaldi while walking around the neighborhood (not tripping, ha!) and it brings me right back to that magical moment. It makes life seem BIG.

Indie Summer playlist on Amazon Music is on repeat lately, giving me the summer vibes! Discovered favorite from the playlist is Thunder Clatter’s “Wild Club” – such a fun, dances, song!

Been listening to ABBA lately on my morning commute because it fills me with unadulterated joy and I CANNOT HELP but smile. I’m not even a huge fan and feel so goofy jamming in my car, but it sure is a huge serotonin boost.
I’ve also started a personal “Funk Fridays” tradition that has drastically improved my “just slog through it” mood.

This list, originally from Buzzfeed, introduced me to so many artists I didn’t know about before. It’s called “24 Songs You Missed This Year That You Need To Add To Your Playlist.” The title was totally accurate! I did miss these songs! And I did need to add them to my playlist!

Original post is here, with link to spotify playlist at the bottom: