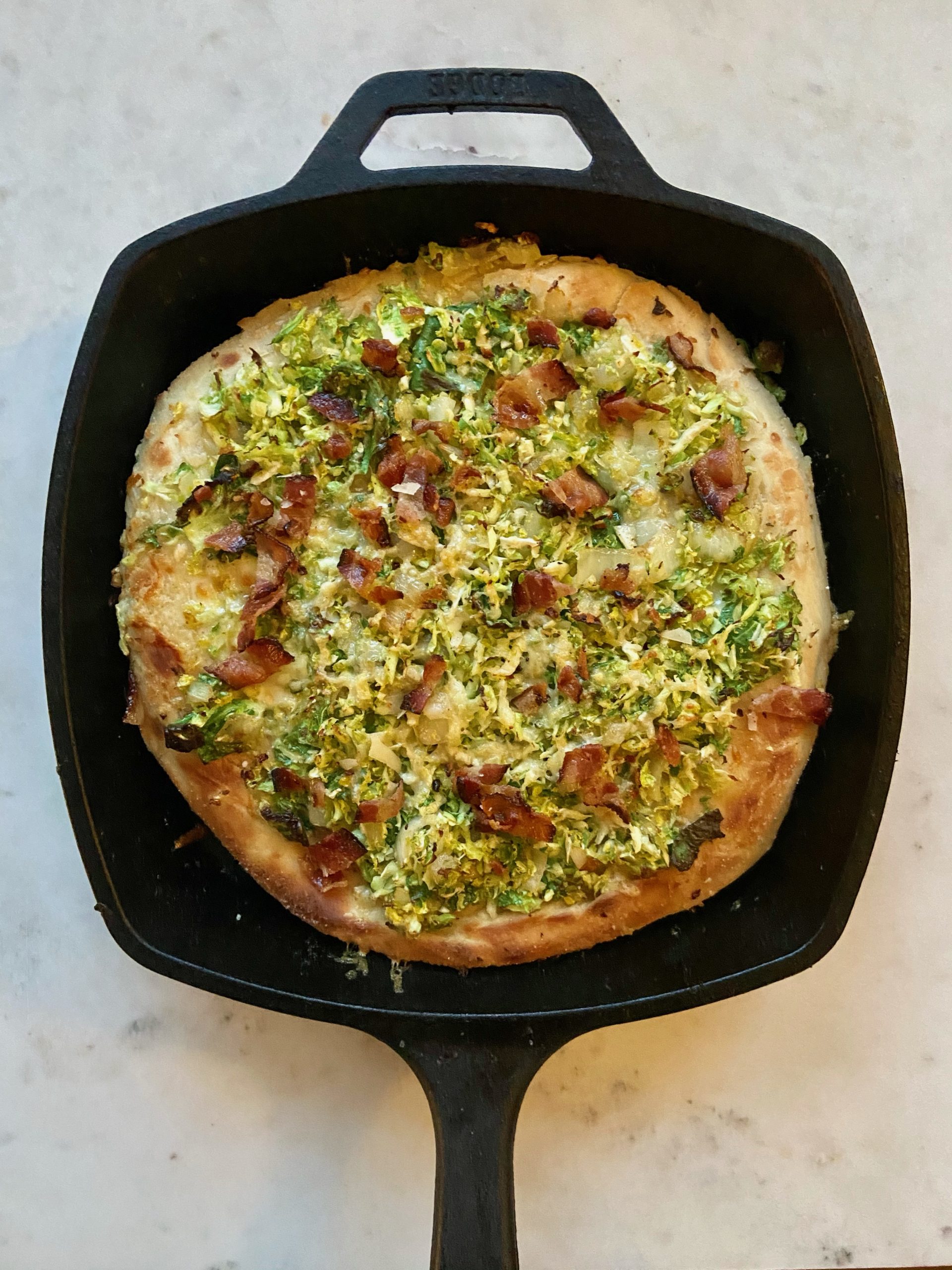 Lately, I’ve been really into pan-frying my pizzas…

It’s not like they’re so much easier to make than regular baked pizzas, but for some reason they feel more forgiving. For starters, since the crust crisps up so well in a hot pan, you never have to stress about having an undercooked, doughy middle like you do (or at least like I do) when baking pizza in the oven. Also: Since a pan-fried pizza is relatively small, it makes a great receptacle for whatever odds and ends you’ve got lying around. Parm and few orphaned Brussels sprouts? Chop ’em up and throw on top! A heel of cheddar, half an onion and a single potato? That’ll work! Got a can of chopped tomatoes, a single sausage link and half a ball of mozzarella? Dinner.

That’s how this Bacon and Brussels Sprouts pizza came together last weekend. The exact recipe is below but just know that no matter what toppings you’re scaring up, the instructions boil down to this:

1. Heat broiler.
2. Pan-fry dough in olive oil and flip when crispy.
3. Add cheese and mostly cooked toppings
4. Broil 2 to 3 minutes until toppings are cooked and cheese has melted.

It’s also worth noting that you might want to store a few pizza doughs in your freezer for when the pizza mood strikes. If you’re anything like me, that’s a frequent occurrence. Just remember to take them out a few hours before you’re cooking so they thaw in time. 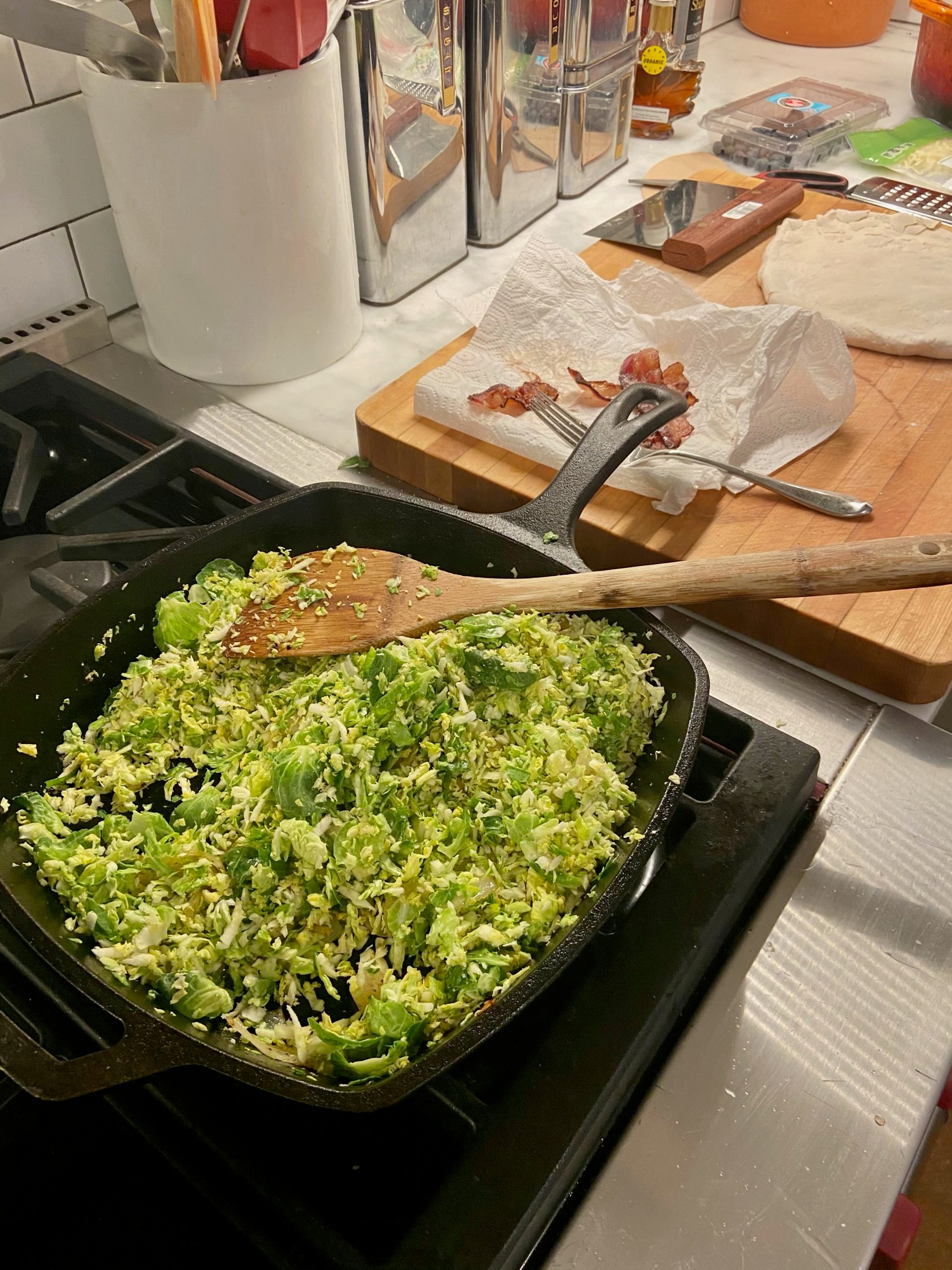 Pan-Fried Pizza with Shredded Brussels Sprouts and Bacon
I prepped my Brussels sprouts using the shredding attachment on my food processor, but the store bought pre-shredded kind is just fine, too. If you want to skip the bacon, just add more olive oil before you cook the Brussels.
Makes 1 personal pan pizza

Preheat the broiler.  Heat a medium cast-iron (or oven safe) pan over medium heat. Add the bacon and cook until crispy. Remove the bacon, set aside on a paper towel to drain, then chop finely.

Add a dash of olive oil to the pan. Add onions, salt, pepper, and red pepper flakes and cook until onions are slightly soft, about 3 minutes. Add shredded Brussels sprouts and cook until slightly wilted. (They will cook more in the oven.) Remove to a plate or dish. Wipe down pan with a paper towel and set back on stovetop over medium heat. Add a tablespoon of olive oil.

Using your hands to press or a roller to roll, shape pizza dough half into a circle the size of your cast-iron pan. (The crust that results will be on the Sicilian-side—slightly cakey. Use less dough if you favor thin-and-crispy style pizza crust.)

Add the flattened dough to the pan. Cook for 2 to 3 minutes, until the dough is bubbly on top and brown underneath. Flip, and layer on mozzarella, cheese, and onion-brussels mix. Slip the pan under the broiler for 2 to 3 minutes, until the cheese looks bubbly. (The bottom will cook during this period as well.) Sprinkle bacon bits on top and serve.

Yes! This is my recent favorite way to make a pizza too! I used to always have inconsistent baking issues when I would make pizza and with this method is turns out perfect every-time. Great photos too – makes me hungry!

Ha! I live in Tanzania and my oven no longer heats on the bottom half (Buying a new one is not in the budget at the moment and haven’t had luck getting it fixed). We have found that starting the pizza in the oven and finishing it on the stovetop is really good. Nice and crisp. Who knew it would show up here as an intentional plan! I feel so affirmed. Now if only you do a post about how fun it is to flip muffins upside down to finish baking them…

For crispy crust pizza you can beat a pizza steel. SO much better than a pizza stone! A bit more of an investment but it will never break like a stone can. So worth the money.

I use the same recipe! I always make two batches since most of the work is taking all of the ingredients out and cleaning up the mess. Then I cut each dough into three smaller doughs for individual pizzas, wrap them with Press and Seal, and freeze them so I can pull them out for quick lunches or dinners.

jenny! i was walking through trader joe’s tonight when i remembered your SALAD PIZZA (for the first time in a couple of years!) and bought herbed dough on the spot! and now i’m reading this… sounds like a perfect dinner combo for the weekend.

I make this Detroit style pizza from King Arthur Flour all the time, but I make it in a cast iron because I don’t have a Detroit style pizza pan. It is hands down one of my favorite pizza recipes, and it comes out perfectly even in a subpar gas oven. The dough is tricky in that it can be pretty wet and feel like it’s going all wrong, but I’ve made it by hand and in a mixer, and despite thinking I’ve ruined it, the dough always turns out great. Definitely do a good amount of olive oil on the surface of the pan (like, focaccia levels). So freaking good. https://www.kingarthurbaking.com/recipes/king-arthurs-detroit-style-pizza-recipe

Game changer for summer when you can’t bear to turn on the oven! Also, this is THE best way to reheat any leftover pizza! Crisp up in a pan with the lid on and it tastes just like it was delivered (or made)!

Could Jenny or anyone share a good pizza dough recipe? I’ve been unsatisfied with mine and looking for a better one for a long time…

Hi! Google “Smitten kitchen lazy pizza dough” and of the three options she offers, I highly suggest trying the overnight dough (it tastes the best). It’s a Jim Lahey recipe and we’ve been making it for years. Foolproof. Hope you enjoy!

I’ve been using this recipe in the pandemic https://www.marthastewart.com/344334/chris-biancos-pizza-dough?utm_source=pinterest.com&utm_medium=social&utm_campaign=social-share-recipe&utm_content=20200531&utm_term=344334
The dough is easy to make and works really well. There are four of us (two adults, two small children) and the quantities in that recipe is enough for us to have two pizza meals. I let the dough rise, punch it down and roll it into a ball and freeze half of it. You just take it out the day you want your pizza and let it rise. It’s a bit harder to roll out but still good. I’ve also used it as the base for stovetop pizza and it worked really well

Thanks Justine and Laura and DHS and Lisa!

I’ve been using this Rachel Ray recipe for years and it’s never let me down. I make it by hand or in the mixer, depending on the mood. Also, you can use instant yeast in place of dry active. You can make it in a skillet or on a stone or steel or pan. I sometimes use a jelly pan turned upside down. You can also double it if your family is really hungry. basically, you can’t mess it up.

The best tip I found from the Sally’s Baking Addiction blog is to put olive oil on the base before adding sauce and toppings. It helps crisp things up really nicely!

Looks great! Would also be delicious with a runny egg on top!

My husband makes pizza dough from scratch, and he bakes the pizza on a stone in our toaster at 450 degrees. You need to sprinkle corn meal on the stone to keep the crust from sticking. Best pizza ever!

in our toaster oven. My fingers got ahead of my brain.

One thing that’s helped me with oven pizza is cooking the crust plain for a bit (~10min?) before putting the toppings on. Gives crust a head start and lets it get cooked without totally roasting the cheese to a crisp!

A good gas oven makes all the difference in pizza baking. I found this out when I moved from a house with an electric oven to a house with a commercial-grade gas oven. I’ve never had a bad crust since and I make pizza weekly.

What kind of oven? I have been dissatisfied with my LG gas oven since the day we got it and am on the hunt for one that bakes consistently! Thanks.

that picture made me droooool.

I will try this tonight. I’ve had exactly one miracle success with a sheet pan pizza but every single one since has been soggy in the center despite a 500f oven. I will need more pizza than my cast iron will make so will have to make two but it sounds like they’re quick so – off to make dough.
Also I like chewy dough – any tips for getting a chewy crust instead of a bready one? I’ve kneaded both before and after the rise yet still get bready. I’ve also used 00 Italian pizza flour and still, bready. Thank you!

Make a focaccia base.

I like thin crust with big charred bubbles and chewy texture. A lot to ask for a home oven pizza I know but I want to at least lean in that direction.

I will give your suggestion a try but stretch it thinly and see if you are right ; ) Thank you

Have you tried aging the dough in the refrigerator? I use the King Arthur sourdough discard recipe, but probably any slow rise crust will work. If it sits in the refrigerator for a few days and is made out of bread flour, the texture and taste is really incomparable. That goes double if you use a cast iron skillet and grease it with plenty of oil. The contrast between the crisp crust and the soft chewy interior is heaven.

Wow I never thought about shredding brussels in the food processor… mind blown. I started making pizza in the cast iron about 2 years ago after seeing this video!! https://www.bonappetit.com/video/watch/from-the-test-kitchen-claire-makes-cast-iron-skillet-pizza

This is the recipe I always use, too!

Reheat on the stovetop too. Only way to do it.

I’m not selling it but Fleishman’s makes a yeast just for pizza making. Takes 5 mnutes. I make it every Friday. Give it a try. It’s quite good.

We do this! Friday movie and pizza night. Except we do our pizza on the bbq. A thin crust pizza takes 2-3 minutes.

YES looks delish! We make this same pizza but add diced Calabrian chilis, a drizzle of honey, and pickled red onions at the end!

Love the concept and am interested in trying it… but question: pizza dough is raw and raw dough (flour) needs to be heated to a particular temperature to kill any bacteria… so is the heat / time in your recipe enough? It seems so fast (which I like!) but not super hot? Even pizza on the grill takes 5-7 minutes, but that’s at 500+F. Thoughts?

My method is to just brown the bottom on the stove while I put the toppings on, then put in the oven at the highest temp (usually 450 for my oven) for 10-12 minutes. I like my crust thick, though, so the method here might be suited to a thin crust ‘za.

What a great idea for leftovers in the fridge! Can’t wait to try this method. Thanks!