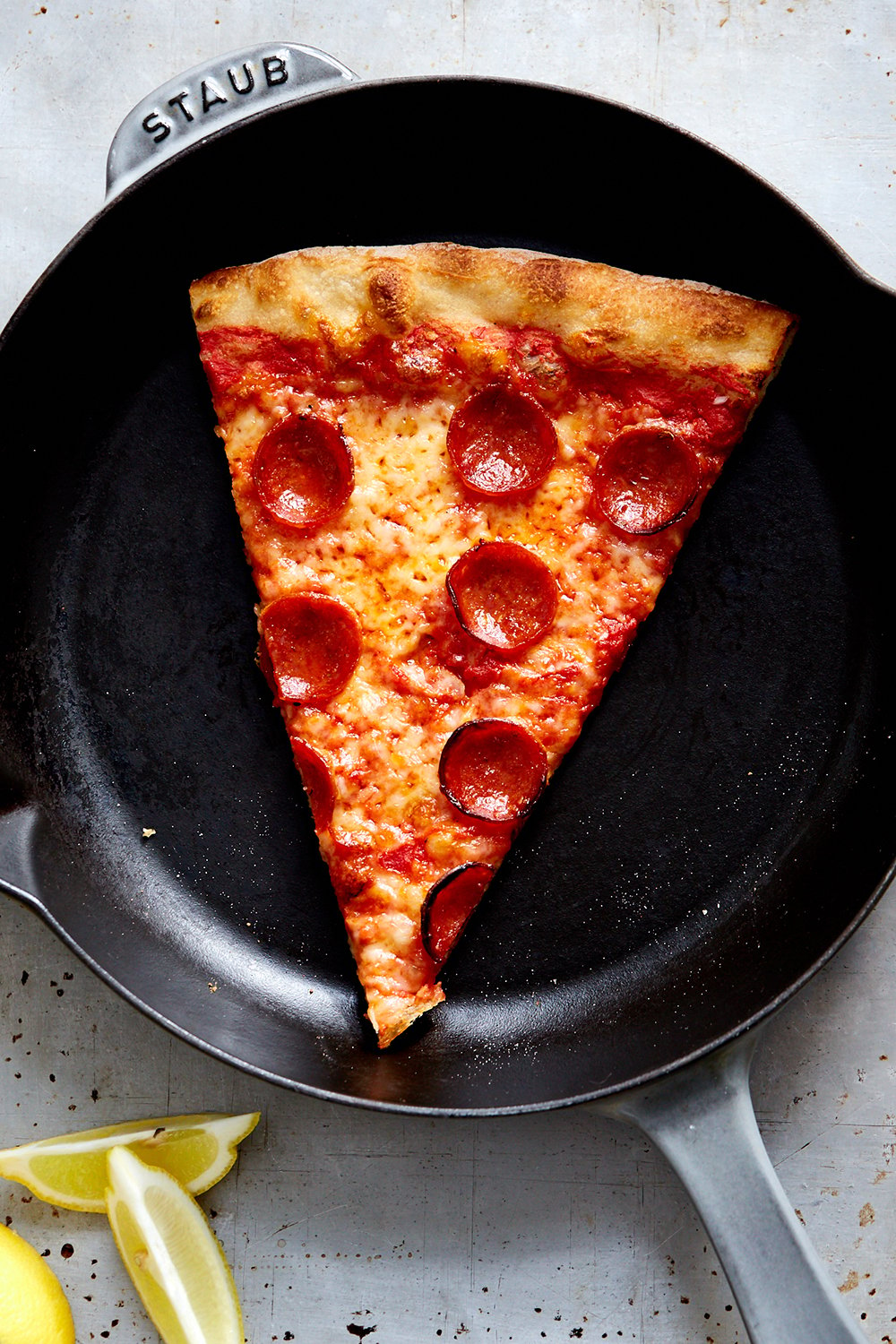 One of the best parts of living in New York is having 24/7 access to pizza. I live near a pizza spot that boasts a three-hour wait most nights, so despite my best efforts to buddy up to the owner during off-hours, I’m still usually relegated to takeout. The upside? Pizza for breakfast the next morning. The magic of the fresh-out-of-the-oven piece is often lost the next day, but I recently learned a trick that revives even the soggiest slices…

Reheat with a skillet!

Gone are the days of gloppy, microwaved slices and dried out pies that fall victim to too much heat in the oven. Reheating pizza on the stove, preferably in a non-stick or cast-iron skillet, preserves the flavor without sacrificing the texture. It warms the slice evenly, and takes less than five minutes.

Heat a non-stick skillet over low to medium heat. Place cold pizza in the pan, and heat for two minutes, or until the crust is crispy. Cover the slice with a lid for one minute, allowing the cheese to fully melt. If you want to really go for it, add a quick squeeze of lemon to wake up the flavors (Mark Bittman swears by this, too), and devour while watching TV reruns.

What’s your go-to way to eat leftover pizza? In the oven? Straight from the fridge? State your case!

(Photo by Yossy Arefi for Cup of Jo.)

if you have a steam/convection oven (such as Wolf), just use the reheat cycle which steams and then uses convection to finish.

Microwave and a beer. Weekends ONLY!

Sorry but the air fryer is definitely the best way to reheat a pizza!

I’m definitely commenting without even reading to see if someone said this, but Pizza in a toaster oven is the absolute best way to reheat. Sometimes it’s even better than fresh! I believe it’s better than cast iron too! :-P

Eat it cold with ranch on the side for dipping.

Years ago I read a hack in Cooks Illustrated that I swear by, though it takes 30 minutes (!). Put the pizza on a cold cookie sheet in a cold oven, turn the oven on to 250 for 30 minutes. You get melty cheese and a crispy crust, too!
I’m gonna try your trick though, Franny. 27 minutes shorter seems worth a shot!

This is what I used to do, before I got a steam oven. My life has officially changed forever. Old pizza comes out of that steam oven like it was freshly baked! Never going back.

Adrianna, my oven is a steam oven but i don’t know how to use that feature! Tell me your ways.

Would love a post with winter books from Caroline!!! :) I have Inheritance on hold at the library!

For me it’s two slices up side down (like a sandwich) in the toaster/grill, sooooo gooood, like a calzone/pizza toasted ?❤

This is what I do! Except I microwave for maybe 20 seconds and then throw it in a hot pan

I totally agree with using a pan but we are the “anti non-stick” types and prefer to use our cast iron. The super plus side of cast iron is that there’s usually some great residual flavors from yesterday’s meal like bacon or carmelized onion. ??

Yessssss!!!! I thought I was the only one who knew about this trick :)

My husband puts leftover pizza slices in the toaster. The toaster.

Wise man- toaster is the only way to do it!

Perfect timing! Lunch is in 5 minutes and I have leftover pizza from yesterday in the fridge. Yum yum yum. Thanks!

I remember COJ including a link to a post that shared a similar method years ago and I have carried that game changing advice with me. I almost prefer pizza the next day now!

Have you tried reheated pizza in an airfryer? It’s a game changer!

The best way to eat next-day pizza: straight out of the fridge. Cold pizza is a perfect food.

Toaster oven on a tray all the way. Crispy crust and melty cheese, super efficient and quick.

I typically stick in the microwave, but warming on a skillet sounds like a way better idea! As I like my crust crispy.

Hands down the best way to eat pizza is to wrap leftover individual slices in foil and keep them in a jacket pocket (ideally in winter) to eat on a chairlift while skiing (mountain peaks at the end of long hikes also acceptable). Everyone is always so impressed- and bringing a spare to share and you’ll always make friends

DEFINTELY want to be your friend after reading this!! :)

I freaking love pizza cold from the fridge. It is by far and away my favourite way to eat leftover pizza. However, a friend of mine expands on the skillet-reheat by making a plain omelette and then putting the pizza slice in the middle, reheating it through, and folding it across the pizza. Pizza omelette! Sounds like the perfect hangover food.

We discovered this during hurricane Sandy! We had a gas stove and could light it, heating up leftover pizza on a skillet. Sometimes I even prefer it to fresh!

oh man, LUCALI. I still dream about that pizza. I’ve lived in NYC for almost 5 years and I still think it’s the best pizza i’ve ever had, despite the 4 hour wait. Although my friend and I asked our waitress there what Beyonce ordered when she came (because, duh) and we got a very rude look in return. Oh well!

I, also, dream of the pizza I ate at Lucali’s. If it weren’t for the 3 hour wait, I would have gone back at least once more on my NYC visit.
When I went, Beyonce wasn’t there, but Ed Sheeran was :)

The Lucali in Miami does not have a four hour wait … the pizza is good, but my favorite thing from there is the artichoke hearts. $40 pizza is over-rated. ?