What TV Character Do You Relate To? 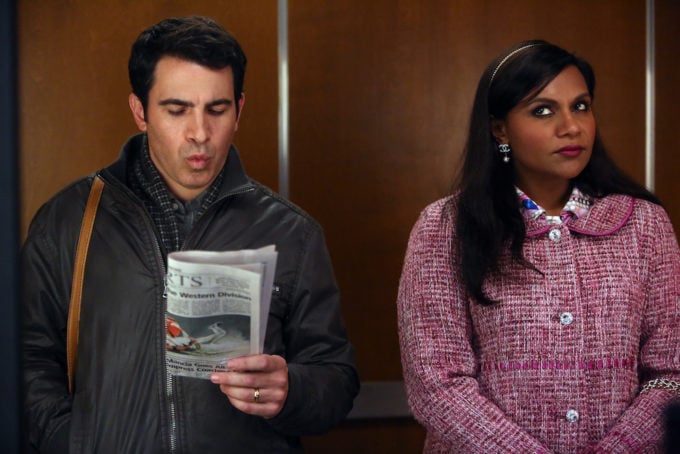 Have you ever watched a show and seen yourself mirrored in one of the characters? It could be a saying or mannerism, or it could be everything about them, but suddenly you’re left wondering if the writers have secretly set up surveillance in your living room. The other night, while watching reruns, I discovered that I am exactly like…

He’s nerdy and fussy and orders his half-caf nonfat lattes with “a whisper of cinnamon” and “just enough foam to be aesthetically pleasing but not so much that it leaves a mustache.” He’s equal parts ridiculous and hilarious, but his heart is in the right place.

While there is plenty we don’t share (for starters, I am not a psychiatrist, nor do I dwell in a palatial mansion surrounded by priceless antiques) I have started to notice that some of my particularities, like my more-than-mild irritation over things like lint on black pants, are pure Niles. I suppose that is the mark of a great television character — specific enough to be memorable, but broad enough to be relatable.

The other night, while watching The Crown, I asked my boyfriend which TV character he is. “Walter White,” he said, referencing the drug kingpin from Breaking Bad. Nothing could be further from the truth. (He clearly did not take this exercise seriously.) But it did spark a lively discussion about Walter, and life choices, and what matters in the end.

Even in the most extreme cases, the best characters still have a way of giving us plenty to relate to. And these days, when television feels more than ever like a window to the outside world, that is very welcome.

What TV character are you? Please share! (And is anyone else like Niles, or am I alone?)

P.S. The ultimate TV guide and 9 couples with the best on-screen chemistry.

(Top photo from The Mindy Project.)

413 COMMENTS
WRITE A COMMENT
Design
most popular
01
My Sister’s Home Makeover
02
What Are Your Top Three Books?
03
The Ultimate TV Guide (If You’re Looking for Something Great)
04
Catherine Newman’s House Is a Joyful Jumble of Books, Games and Cats
05
Behind the Scenes: Making a Magazine Cover
May We Suggest…
By Caroline Donofrio
Design
TV Shows: What’s Your Guilty Pleasure?
May 21, 2020

I was once given the greatest compliment in my 31 years of life and it was “If Leslie Knopp and Jessica Day had a daughter, it would be you.” Thank you Vin.

My family says I’m a mix of Ann Perkins and April Ludgate from Parks and Rec. I don’t disagree ;)

“Specific enough to be memorable, but broad enough to be relatable.” This assessment is spot on for the all-star characters of the big screen that we “know” and love!

Personality wise, I’m a total Sally Albright from “When Harry Met Sally.” I can be fussy and sensitive. I’m generally an optimist and can lean towards being idealistic and naive. Not to mention I really dig her effortlessly cool style! Channeling my inner Sally right now, currently sporting a pair of high-waisted slacks, loafers, and a mock-neck sweater sitting at my work desk.

I’ve been called – repeatedly – Felix Unger from The Odd Couple. I take it as a total compliment!

I’m sorry to say that I’m Chandler Bing, with a touch of Beth from Queen’s Gambit.

Who I WANT to be is Amy Gardner from the West Wing. All in good time.

My husband is The Professor from Money Heist (and I love it!).
Still figuring out who I am. Hmm…

Nothing came to mind, but I took the quiz someone posted & got Jadzia Dax from Star Trek Deep Space Nine-which is actually very fitting haha. I watched that show as a kid & always loved her. I’m a science nerd, very intelligent, work in a male dominated field, and am not afraid to stand up for myself. But also love my community & am very caring. And if offered the chance, would go into space in a heartbeat!

I’ve always related to Cory Matthews, from Boy Meets World. Very nerdy, fairly socially inept, super quirky, loyal, and always trying to get to the bottom of the question, “but why??” (I’ve also been told several times that I’m the Phoebe of the group, so the quirkiness factor is strong.)

My husband’s brother Ben has always loved Seinfeld, but when we were watching it last night for the first time in a few years, I suddenly realized – Ben is George!! 100%. He is as blunt and straightforward as they come, and doesn’t care in the least what other people think of him. It’s refreshing and entertaining, because you always get a completely unfiltered opinion.

I’m so Monica Geller it isn’t funny. Chef, clean freak, competitive. And I literally cleaned my neighbours door once. It was my mum’s idea and only after we were doing, I remembered the episode and we burst out laughing. Ops

Another Leslie Knope here, as told to me by others and eventually confirmed by myself. Though MY crush on Joe Biden is 100% platonic, I promise.

I am Niles for sure! My mom jokes that my brother and I are Niles and Frasier. (We are maybe a little pretentious about wine and food from years working in restaurants).

Haha-I just thought the other day that I am scarily like Nick Miller on The New Girl in some weird ways! I do have a cardboard box of scary mail/bills in my closet that I do my best not to deal with. I’ve had a patchwork employment and relationship history. I dream of writing a novel like Pepperwood! I’m oddly charismatic and and a great kisser. He’s just one weird side of me. Don’t worry, I have mostly dealt with the box of scary mail. This pandemic has made it harder to procrastinate unpleasant tasks!

Nick is one of the most lovable characters of all time.

My husband says I’m Elaine from Seinfeld, and I have to agree. I like to think I have a LITTLE grace :P

According to my husband I’m split halfway between April Ludgate and Ann Perkins from Parks and Rec. I don’t disagree, and I take it as a compliment. I’m both a loyal, cheerful nurse, and think pretty much everything is stupid, lol.

Omg that’s exactly what my husband says! my name is ALSO Emily, AND I just wrote a comment saying I was an April/Ann mix too (before reading your comment). I’m also a nurse, I generally go along with whatever…and everything IS stupid, lol.

My husband is EXACTLY Ben Wyatt from Parks and Rec. They both love elaborate board games, puns, and fantasy worlds – he would totally play Cones of Dunshire. Every time we rewatch it he looks at what the character’s wearing and says “I would wear that.” And he would – he owns a million shirts that are, by pure coincidence, exactly like the character’s. I used to wonder why I found Ben Wyatt so attractive…well, now I know =)

oh yeah, same here. My college roommate pointed out that my then-boyfriend reminded her so much of Ben Wyatt, who I find so attractive. So obviously I married him. Those nerds with cute butts are irresistible!

I like to think of myself as part Shiv Roy from Succession, part Don Draper from Mad Men. I have a mean streak, a classic haircut, am deeply scared inside but tend to sarcastically laugh it off – until I collapse on the shoulder of a colleague, sibling or significant other. I also hold myself to a loyalty I suspect looks arbitrary, at the best, to other people but probably just comes off as non-existent. And yes, I have a strong jawline.

I got Lisa Simpson and the uptight sister from Fleabag. I’ve never felt so seen. :)

The Marvelous Mrs. Maisel! When it came out I literally got, like, 20 texts from many different people (including people I hadn’t talked to in YEARS) saying: have you seen this show? It’s YOU! And I was like WHAT? REALLY!? It was the craziest insight into how people see me in a way that I don’t really see myself (but I am here for it!!).

Rosa from Brooklyn-99. I’m not Latinx, a police officer, or a badass on a motorcycle… but her snappiness, flat humor, and delight in absurd (read: in bad taste) moments speak to my heart!

Oh these comment threads are the best part of this week- the limericks and now this!! I was watching “Where’d you go Bernadette” after reading the book and my husband looked over at me at one point and said “she’s you!” and it made me feel so seen. I had felt the same way since I saw the movie the first time. She is such a mess, but she loves her family, her independence, calls bullshit on all the fancy parents at Bea’s school (and really most people in general), gets lost in her work, and like her friend said, “people like you must create, otherwise you become a menace to society”. My husband and I reference that a lot when I start to get overwhelmed and I know (and he knows) I need to go pick up my knitting or embroidery (or anything haha)!

I just finished the book and was relating to her as well! I can’t wait to watch the movie.

A fun personality quiz to see which characters you are like:

Fun! I got Lane Kim from Gilmore Girls. I always loved Lane!

Ooh fun! I got Meg March, which is very accurate!! Oldest daughter, likes to stick to rules, married (semi-)young haha

I took the quiz but I didn’t know most of the characters on the list haha. I need to watch more TV, apparently!

My true self is a mix of Felicity Porter and Lara Jean Covey — sensitive, intuitive, brainy, deep feeling, and totally boy crazy.

We often joke that my husband is just like Gene Belcher from Bob’s Burgers, I am Tina and our daughter is Louise. But I aspire to Linda’s dgaf attitude!