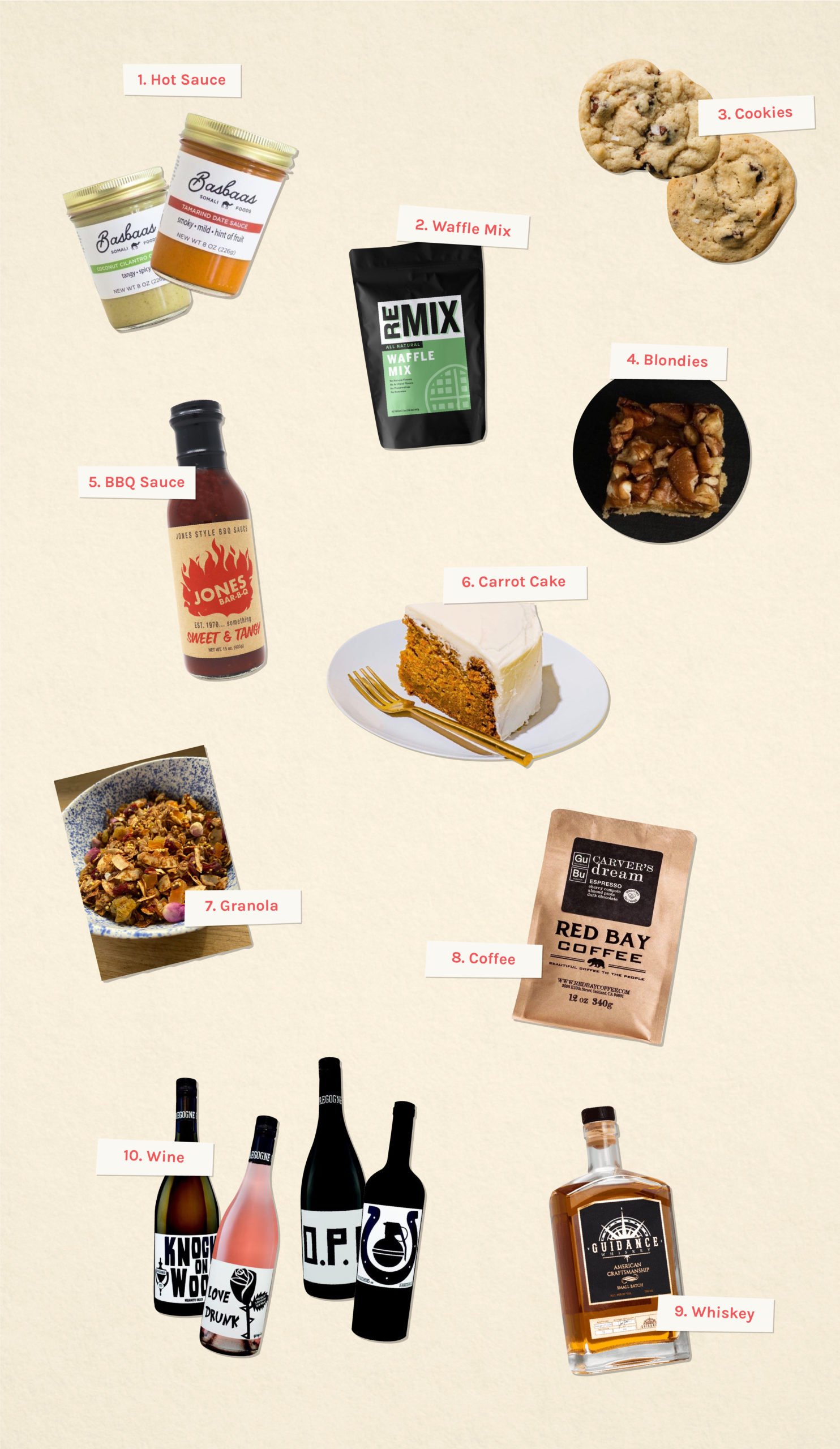 I think most of us would agree that the best gift right now would be an actual physical hug from a quarantined friend or family member we haven’t seen in a while, but until we get so lucky, here’s the next best thing: food and drinks that you can order online — and all sourced from Black-owned businesses. Friend got a birthday coming up? Want to let your sister (or aunt or teacher or uncle or grad) you are thinking of them? Here are 10 food gifts that they’ll love…

3. Chocolate Chip Cookies, $21 for half dozen, The Salty Heifer

Ever hear of a chocolate chip cookie described as smoky? I hadn’t, and now I can’t get it out of my head. This salty chocolate chip cookie is made in Brooklyn with pork lard — hence the smoke — and through June 19, as part of the Bakers Against Racism initiative, 70% of the company’s proceeds go towards Color of Change and United we Dream.

Sweet-and-Tangy BBQ original sauce from a beloved, sister-run Kansas City BBQ favorite. Also available in a two-pack: Coconut-pineapple sauce. How good would that be slathered on grilled chicken?  (Note: They currently have a 2-week delay in shipping, so plan accordingly.)

The lines are always long at family-run Lloyd’s, and it’s for one thing: the legendary carrot cake, dense and moist, iced with classic cream-cheese frosting, and studded with optional nuts and raisins. The New York bakery with two locations churns out more than a thousand cakes a week and has fans all over the world.

A wide variety of blends and single origin coffees from the Oakland-based community hub, which prioritizes hiring, supporting, and training people from marginalized communities. Start with single origin Kings Prize from Ethiopia or fruit-forward Carver’s Dream.

Distilled in Iowa and “captained” by R&B singer Larry Dodson, this two-year-aged whiskey has notes of burnt caramel and vanilla essence.

Award-winning Pinot Gris, Chardonnay and Pinot Noir from maker André Hueston Mack, a one-time sommelier at Thomas Keller’s French Laundry and Per Se, and the first Black man to be given the prestigious Chaine des Rotisseurs Best Young Sommelier award. Also: How amazing are those labels? Mack designs them himself.

Thoughts? Which would you want?

P.S. 8 gifts dads secretly want for Father’s Day and how to drink wine like a sommelier.

I’m going to need that coffee!

Just ordered the Red Bay coffee, thx for the heads up!!

If you’re in Vermont (or one of the few states where they distribute) check out Zafa Wines! I haven’t had any yet (been trying to get pregnant) but have can’t wait to try it!

Omg I feel like I rarely see anyone on the blogs I read commenting from VT. Hi from the Northeast Kingdom!

I notice that lately COJ have been sharing a lot about Black-owned companies and products which is great but I would appreciate it if you would do the same for Indigenous people. Indigenous people have a lot to offer and it would be nice to see them represented also. Thank you!

Fantastic list! Always think everyone should try and do their bit and this is another small step along that road :)

Thank you for this! Just ordered my dad a box of wines for Father’s Day!

Waffles! What I would do for a waffle right now.

I’m a huge COJ fan and I am appreciative of how you have adjusted your content to reflect current times. I have noticed you are featuring more writing from people of color and more resources for your white readers who want to further educate themselves to be better allies and work towards being anti-racists.

But, I can’t help but worry about this post. Are these affiliate links? If so, do you plan to donate the commission that you earn off these black-owned businesses?

Thanks for your note! These aren’t affiliate links. Also, we have always donated a percentage of earnings to causes we care about, including organizations supporting the Black lives matter movement. Thank you!

I’m a bit confused. As far as I know, most people want an opportunity to have valid work, not just charity. Would it be a problem if Black-owned businesses partnered with Jo and she gained a commission from highlighting their products and they gained more customers? And then Jo used that commission to pay her (diverse) staff and also expand her business?

Maybe I’m missing something that would make a situation like that exploitative.

André Hueston Mack’s wine is AMAZING! We just had the rose this weekend and next up is the Pinot. Great job and great price point!

Adding to the list McBride Sisters Winery, a black woman owner winery in CA that makes a perfect picnic wine in a can (among other things):

Lloyd’s! This might be heresy but my favorite is their red velvet cake.

the BLONDERY! EVERYTHING looks incredible but I’ve got to spend my money first on the “blackout blondies” because first things first. But then I plan to work my way through the whole inventory over the course of this year. thanks? ; )

For delicious cookies packed with care, I would definitely recommend Pinckney Cookie Cafe in Kirkland, WA (ilovethesecookies.com). Hard to choose a favorite flavor so try them all!

Uncle Nearest whiskey is delicious, its story even better (tl:dr guess who Jack Daniels learned to distill whiskey from?!?), and Fawn Weaver, its CEO, even better than THAT! She’d be such an incredible entrepreneur to feature here! http://www.amtrakthenational.com/fawn-weaver

Reply
Natalie
Reply to  AN

What an amazing story! Thanks so much for sharing!

I LOVE Red Bay Coffee! Their beans are delicious, and so are their freshly made coffee drinks. I live close to one of their Oakland locations and it’s my favorite little coffee shop.

I pretty much buy wine based on the label alone (sorry but I’m in the visual arts) and these had me sold immediately! Knowing that they are designed by the wine maker himself is super cool. Thanks!

Words can not express my love for Lloyd’s carrot cake!!!!

Can you share the link to the other round up? Thanks so much!!

During my time as a high school cross country runner, my team would race at the Manhattan Invitational at Van Cortlandt Park—right across the street from Lloyd’s. We would always buy a cake to share on the bus ride home! My family, with many kids running XC at VCP over the years, has been enjoying their cakes for decades. It truly is the best carrot cake around and I hope everyone in New York takes the time to stop by VCP on a fall afternoon, go on a run through the trails or cheer on a cross country meet, and support Lloyd’s.

I would also be remiss to not mention that Van Cortlandt Park is occupied Lenape land, colonized by Dutch settlers, and a former plantation that was involved in the slave trade and utilized enslaved labor.

Nora – I was so hoping a runner would chime in about Lloyd’s! I wouldn’t have ever heard of it if it weren’t for my 18-year-old XC-running daughter who has run the Manhattan Invitational (and many other meets) at VCP, and loves going there MOSTLY for the proximity to Lloyd’s. I’ve since read about so many runners from all over the country who feel the same. So thank you for your comment and for teaching me a little history about the park itself.

I used to run track practice in van courtland as well and was like “I know Lloyd’s!!” Then I thought “$59???” Menu looks like it is $18, but maybe $59 with delivery fees? Always good to see the best neighborhood spots getting a shout out on CoJ!

Another runner here! My husband and I both ran many cross country meets at VCP, and almost 20 years later he still talks about Lloyd’s as the best carrot cake ever. It made me so happy to see them highlighted here!
Thank you also for sharing about the land, which I confess I never knew the history of. It’s sad to know that a place that brought me such joy has a painful past and brought the very opposite of joy to many before me.

We’re big fans of AubSauce in our house! We loved their classic bbq sauce especially with pulled chicken. They have spicy peach and pineapple flavors that are really good with pork. We’re gifting some to my father in law this weekend!

Also adding Just Add Honey Tea! I love that you can order some smaller sizes to try out a few different kinds.

I echo this. These posts are much appreciated!

I bought that very granola for my dad for Father’s Day! I can attest it is sooo good and so is everything else we’ve ever eaten at JuneBaby and Lucinda. Happy to see it got a shout out!

As a KC resident, so happy to see the Jones sisters’ sauce on this list! If you haven’t already seen their episode of Queer Eye (or all of Queer Eye, really), you definitely should put it on your to-watch list.