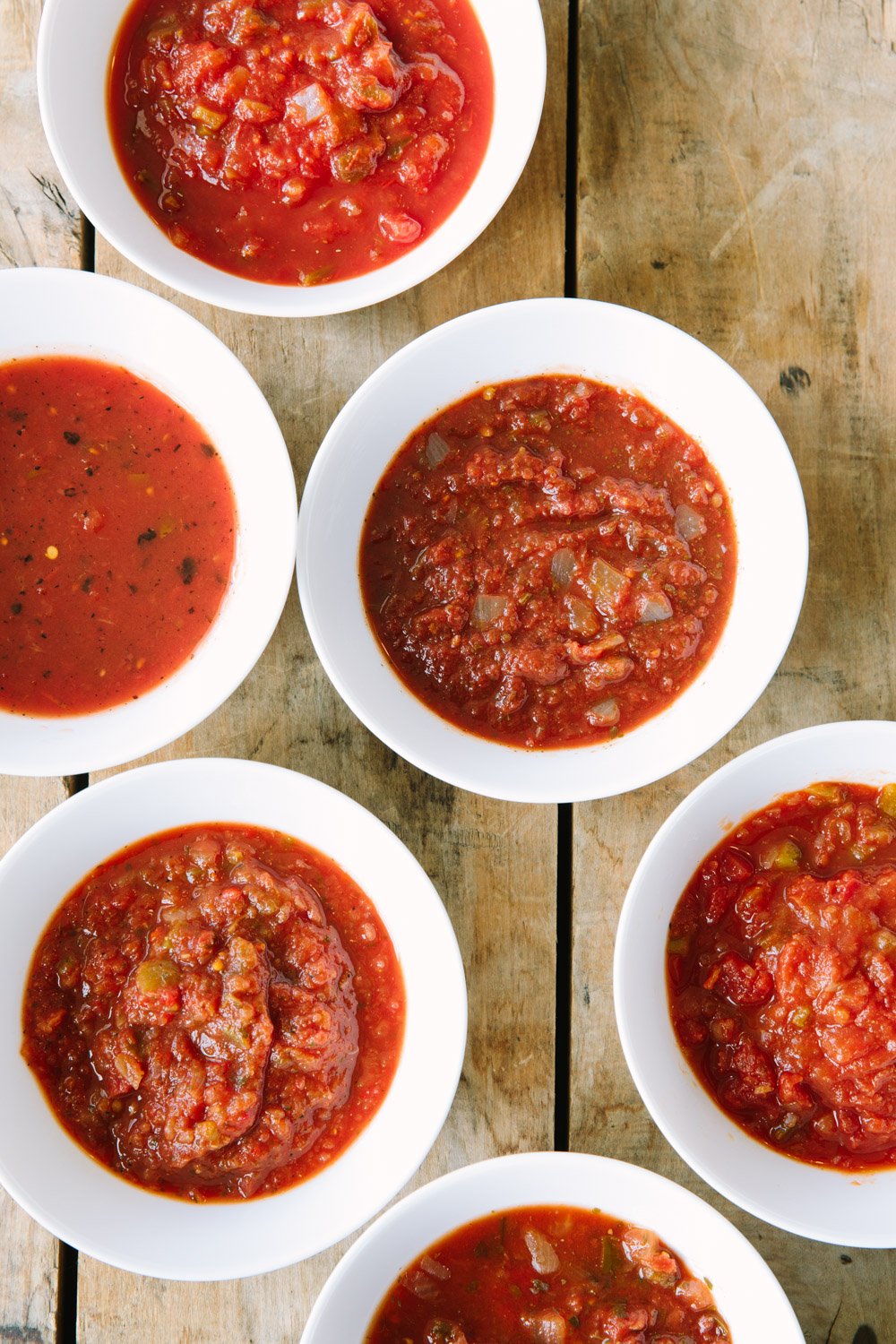 In a little over a week, the 49ers will take on the Chiefs in Super Bowl LIV in what promises to be an epic battle between two old-school teams, but the real contest as far as we’re concerned is something way more exciting: What salsa is a worthy dip to the chips for your Super Bowl party? 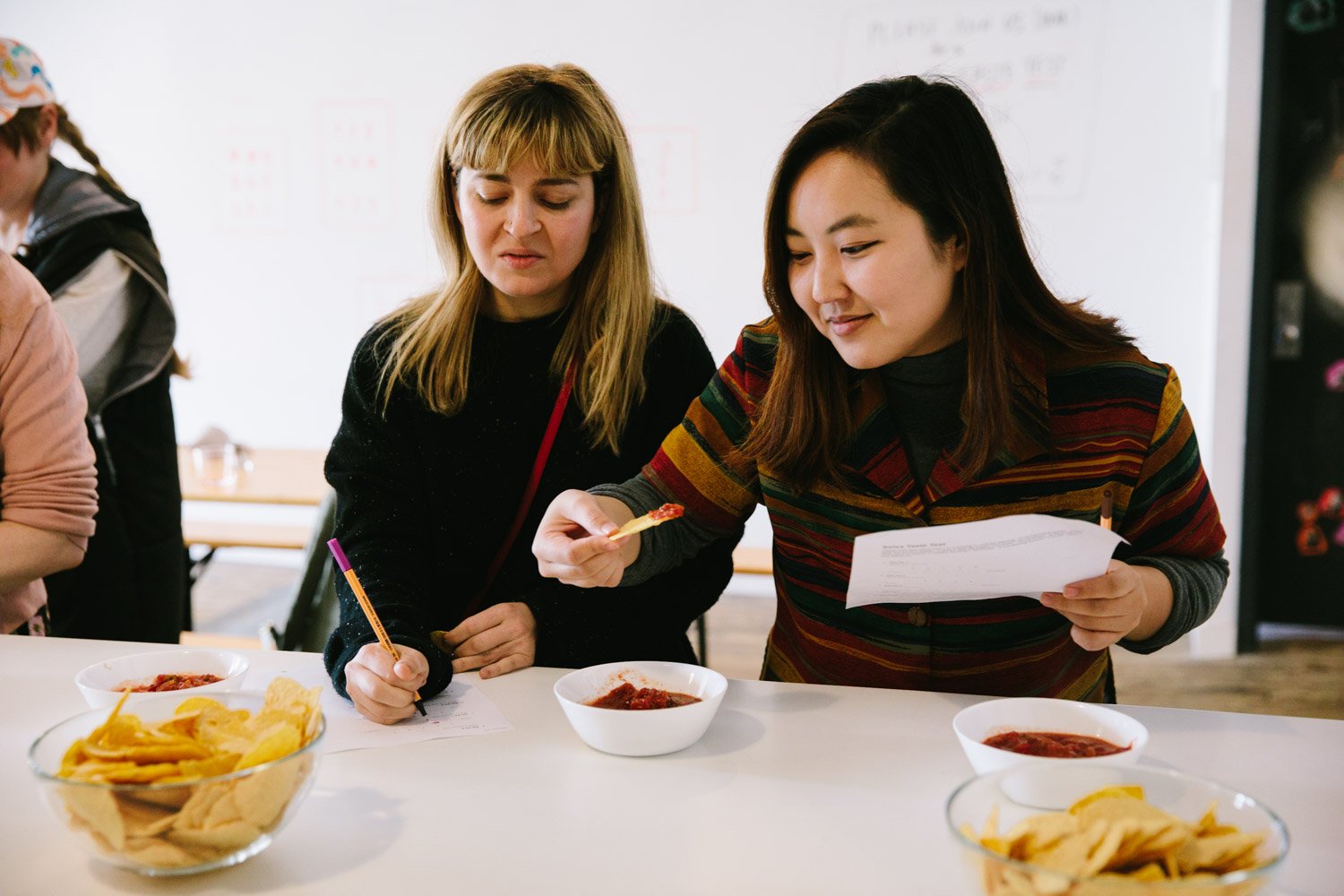 So, we put in the hard work so you don’t have to: We held a salsa taste test at the office and invited colleagues in our Brooklyn co-working space to join us for some chipping and dipping. 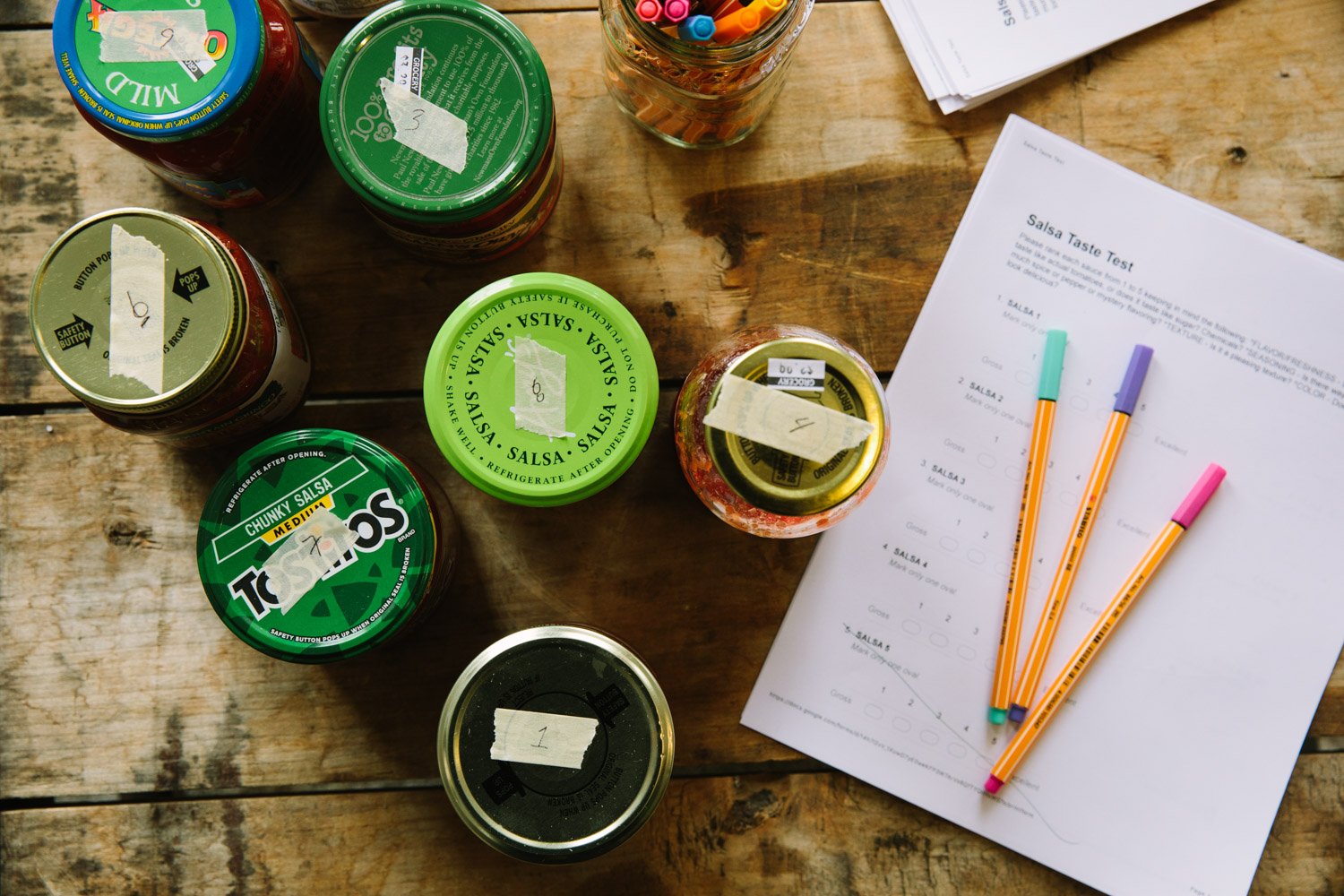 You may have a favorite boutique regional brand you love and swear by, but like all the highly scientific taste tests we’ve conducted in the past, this one included only salsas that were shelf-stable and available nationwide. We did not consider the more salsa-fresca-style options that you can generally find in the refrigerated sections of most supermarkets. 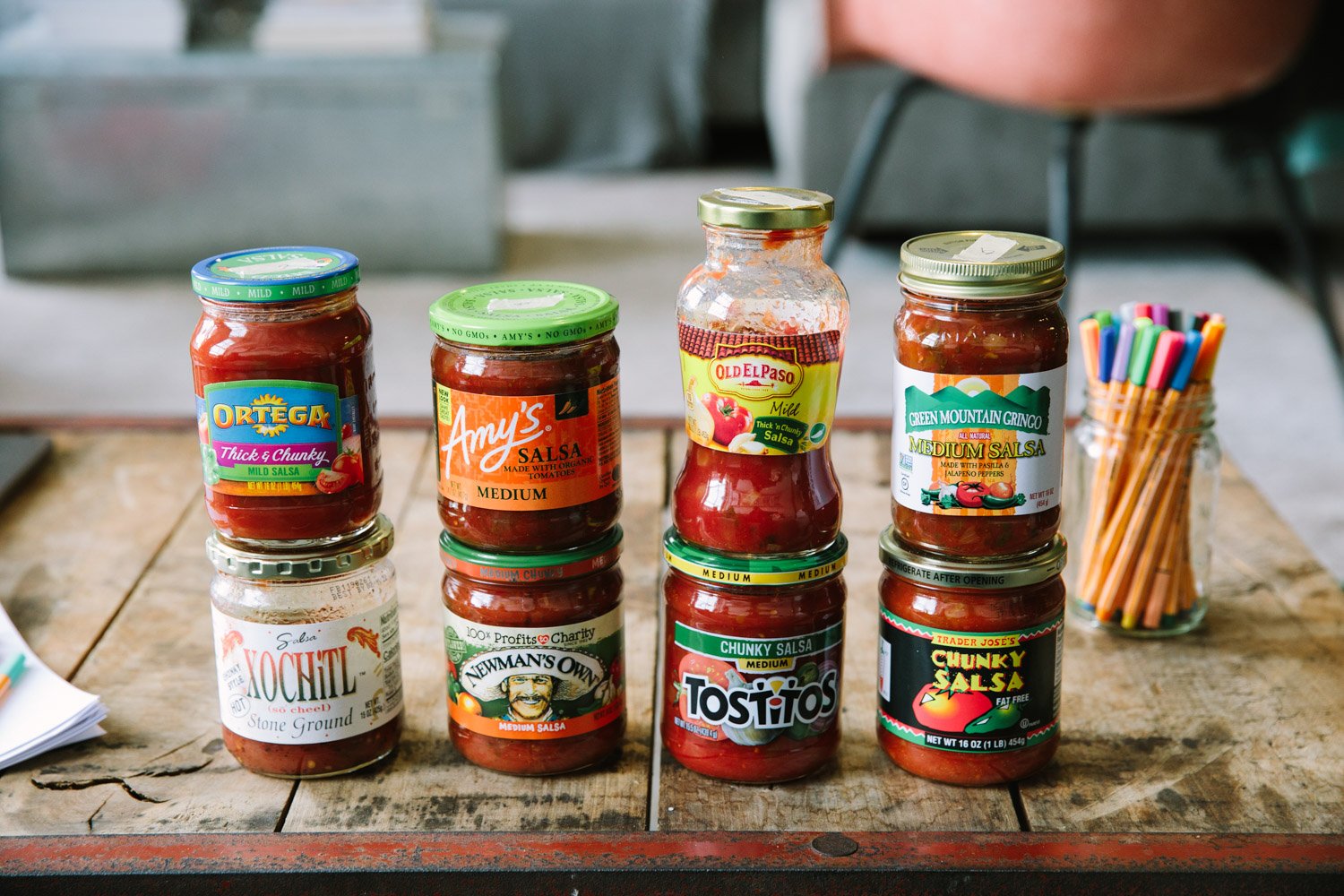 And even though you can find virtually anything mixed into salsa these days (Craft Beer or Raspberry Chipotle anyone?) we sampled jars that labeled themselves in the most purist way, nothing weird or fancy, just “Thick and Chunky,” in the mild-to-medium spice range. We ended up choosing eight brands: Ortega, Amy’s, Old El Paso, Green Mountain Gringo, Xochitl, Newman’s Own, Tostitos, and Trader Joe’s. All of them cost between $2 and $5 for 16-ounce jars. 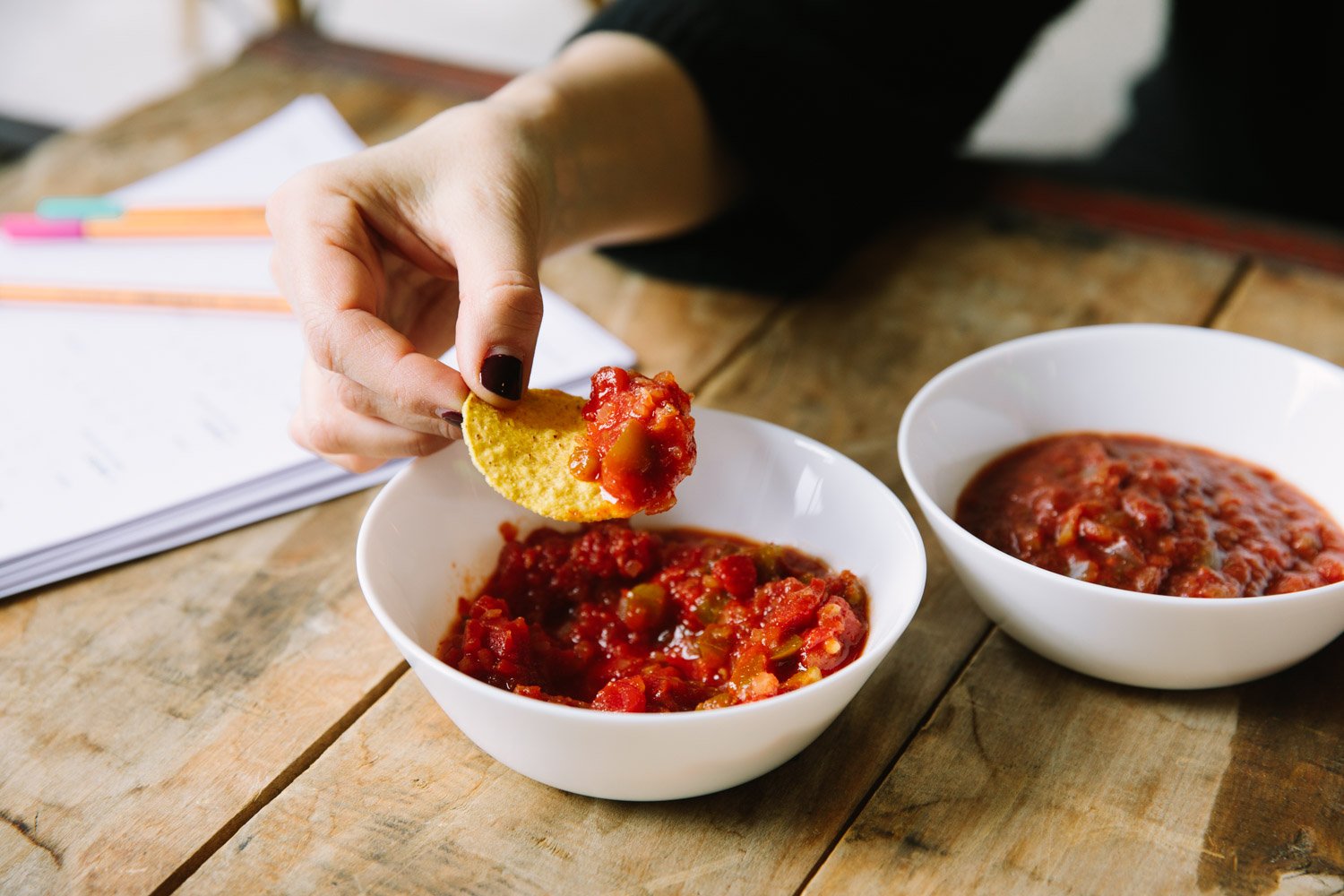 It was, of course, a blind taste test: Each salsa was decanted into bowls labeled with numbers on masking tape. Only I knew which number corresponded to which jar. 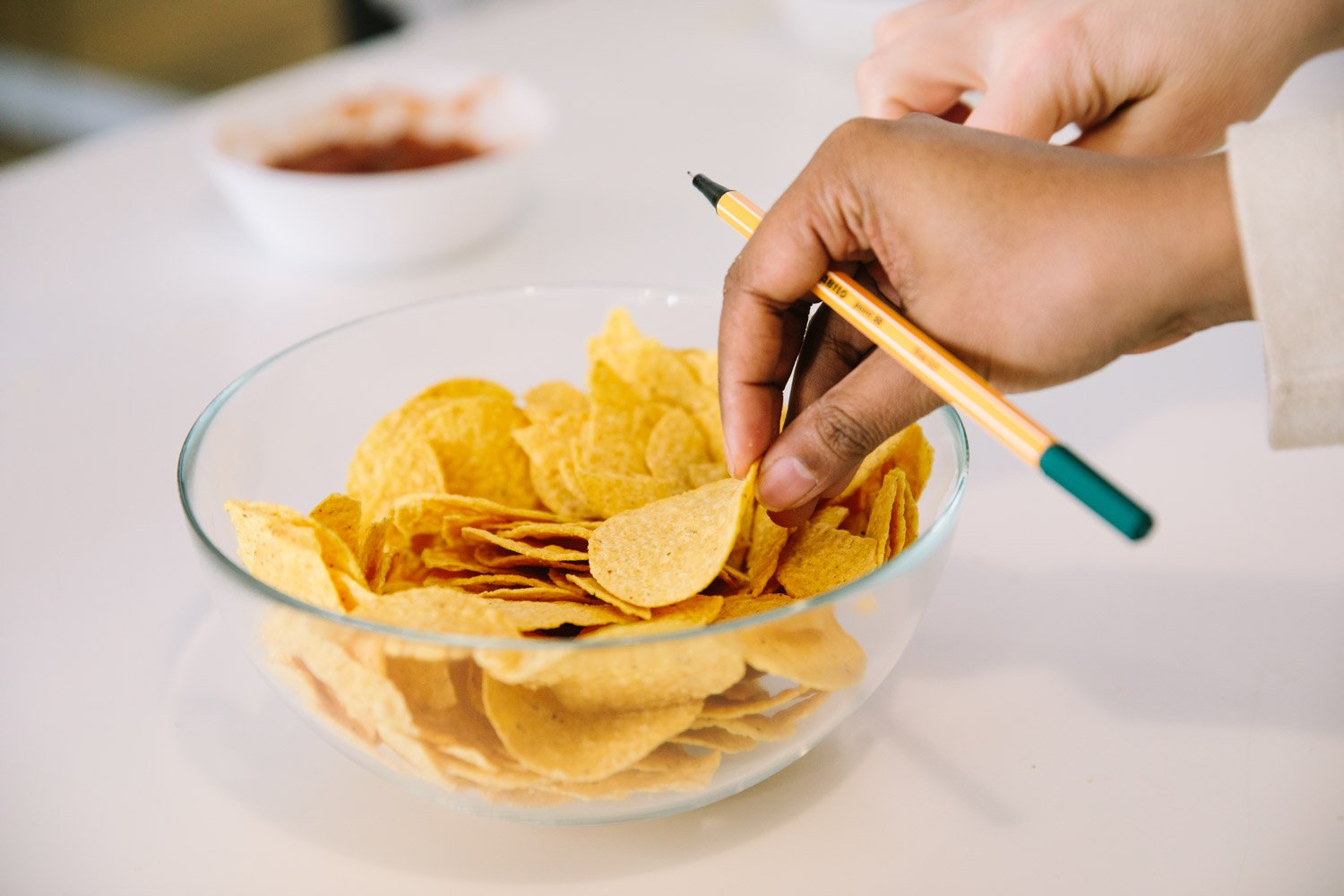 Every salsa was tasted with the same chip: Trader Joe’s Organic Yellow Corn Tortilla Rounds. Before the crowd gets too rowdy over this call, it was purely personal — we chose the chip for its subtle curve (providing optimum surface area for scooping) and dependable sturdiness, which we knew would hold up against even the chunkiest salsas among us. 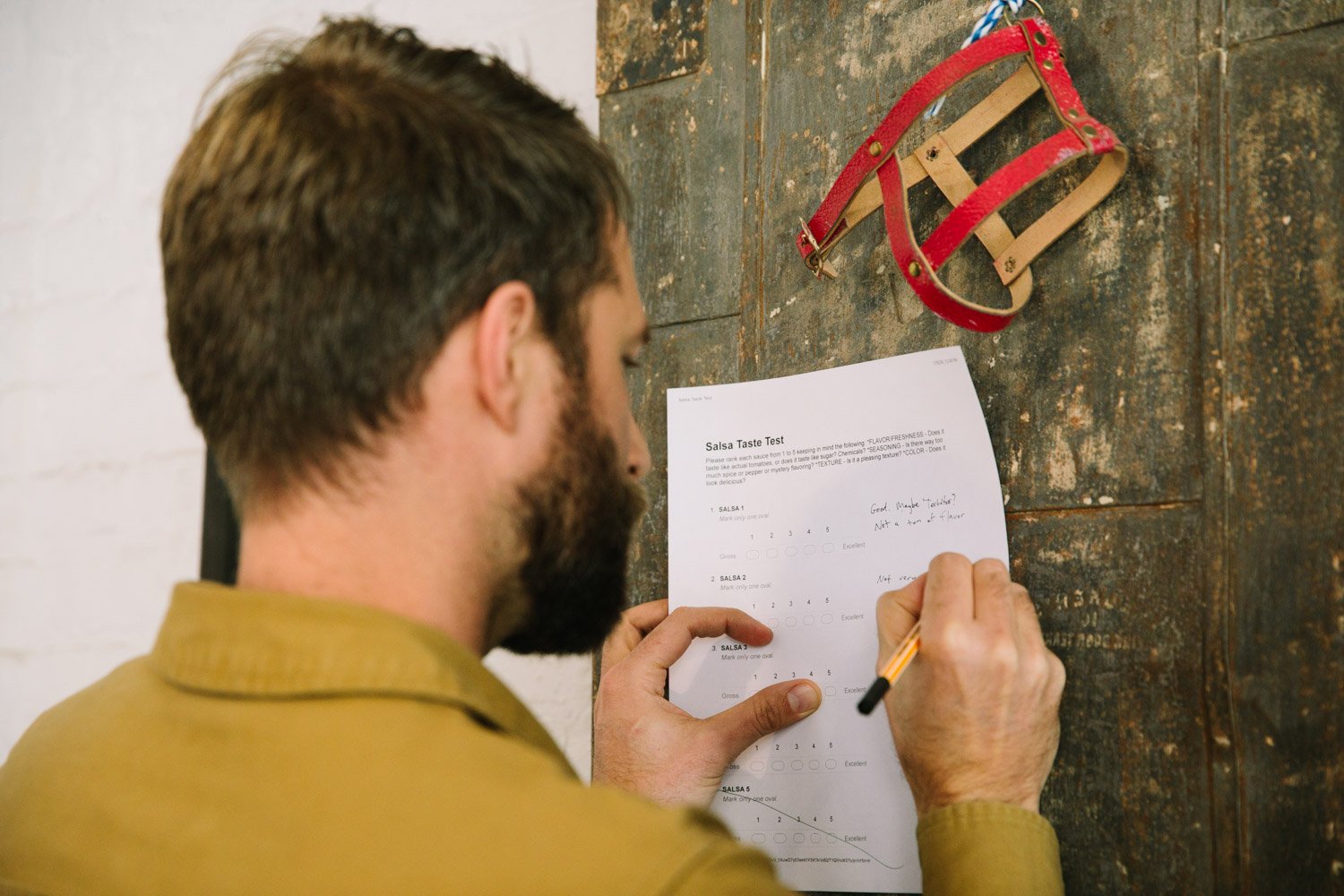 Reviewers graded each salsa on a scale from 1 (gross) to 5 (excellent) keeping in mind the following factors: tomato flavor, visual appeal, freshness, texture, color, seasoning, complexity and heat. They were invited to leave comments as well. 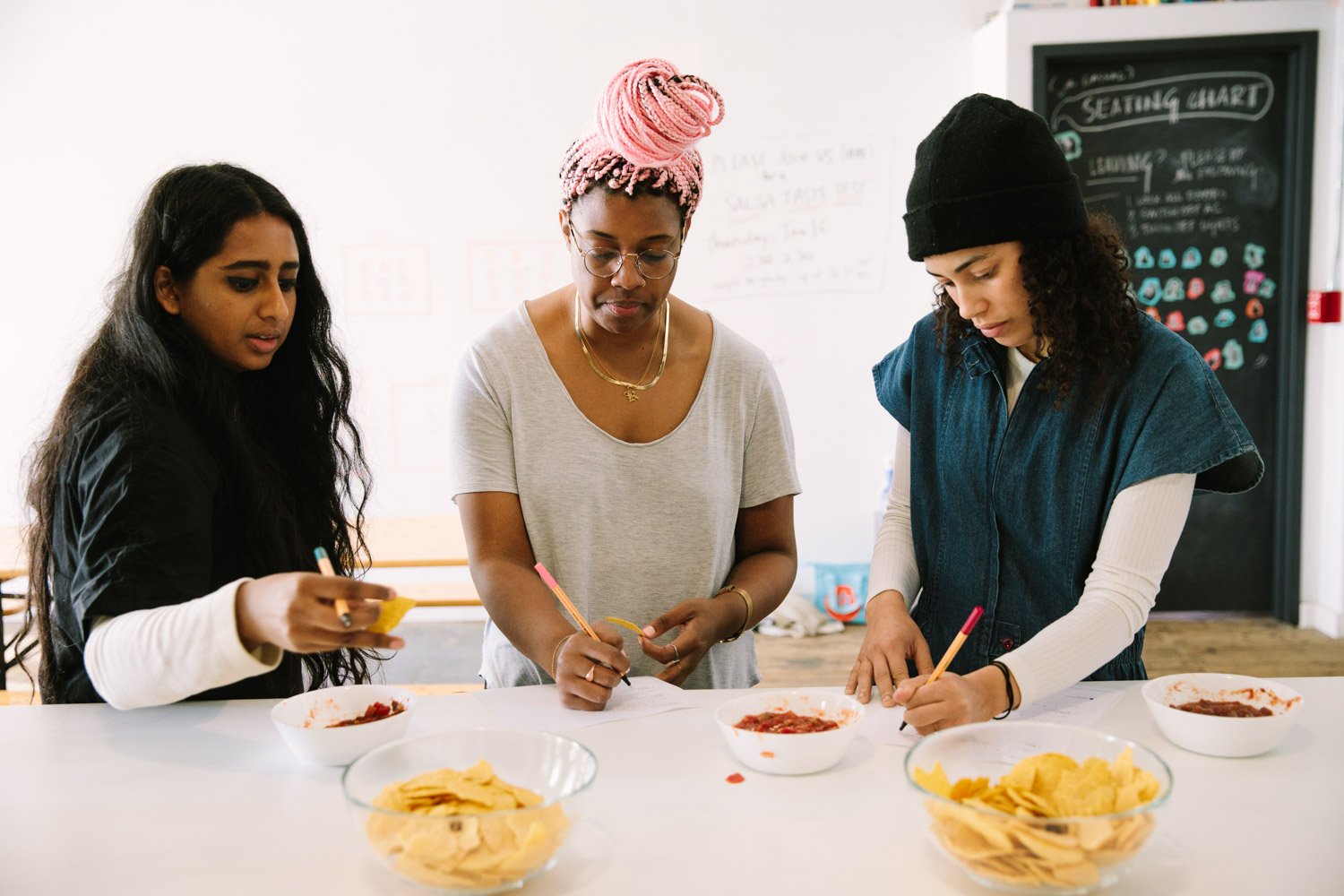 File under “Nice work if you can get it.” 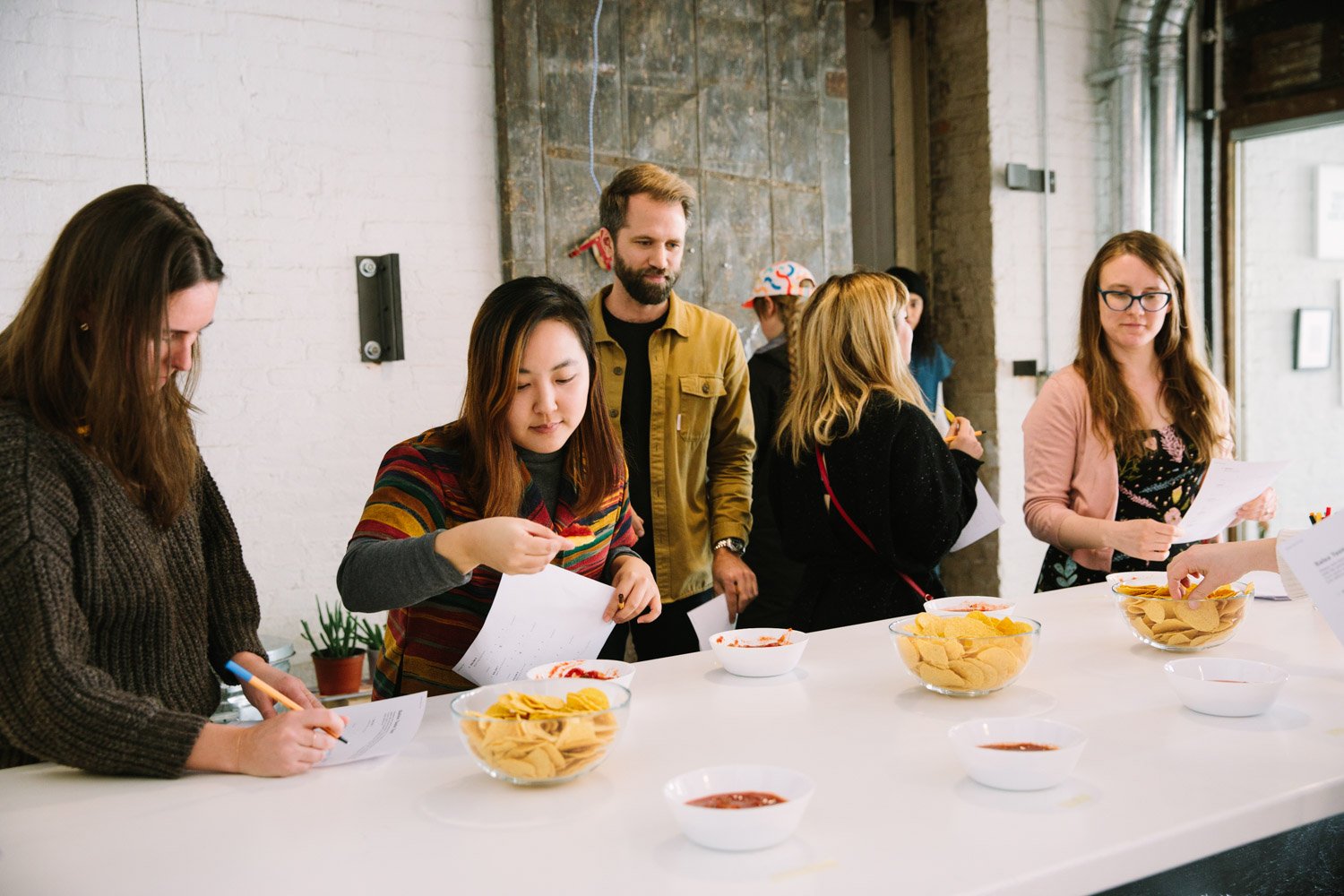 Things got as dramatic as a game in double-overtime sudden death! After our players submitted their scorecards, I plugged the numbers into my Google Form to compute averages for each brand. Sadly, most of them hovered in the mediocre 2- to 3-point range…but two of our competitors were EXACTLY TIED… 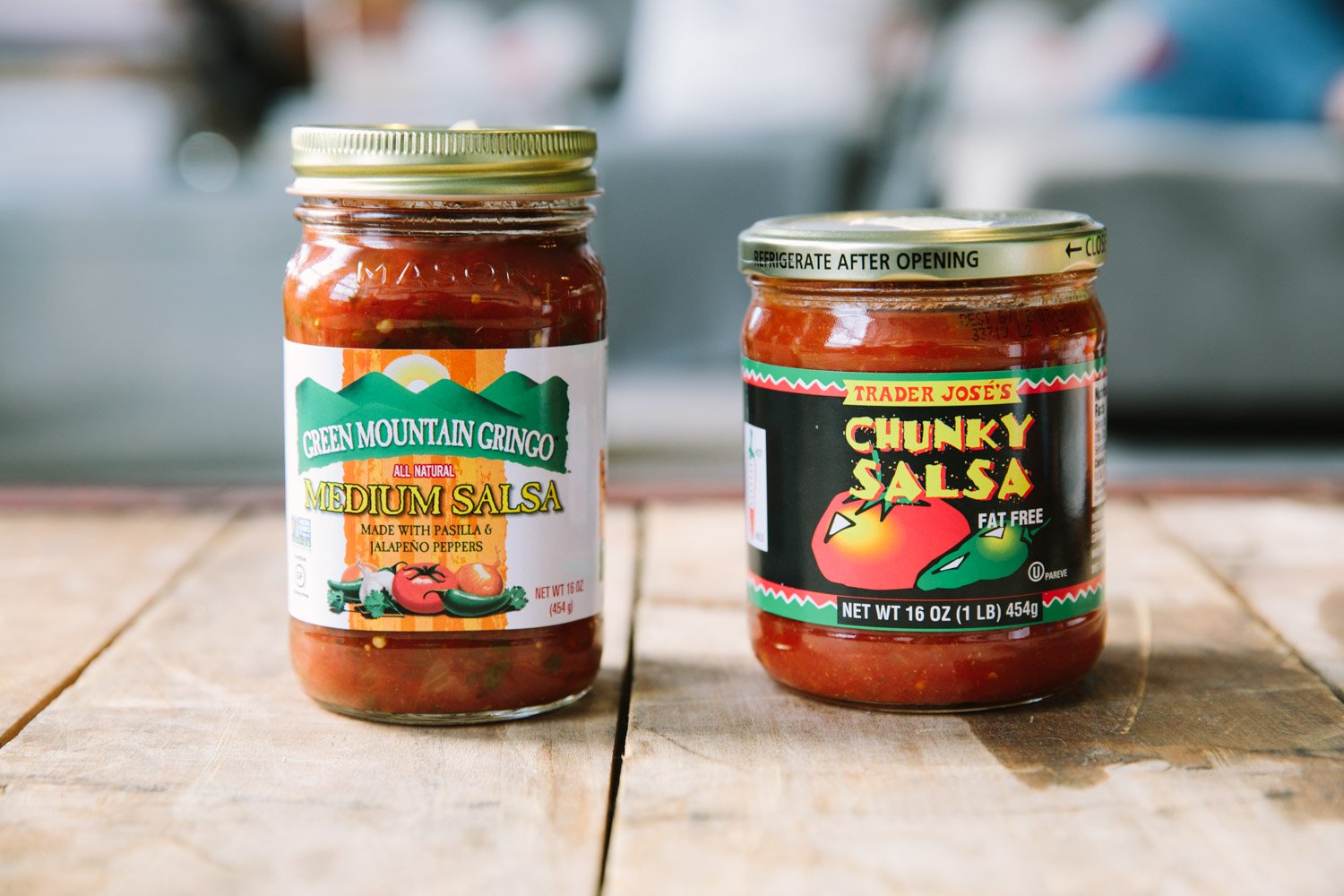 The Finalists: Green Mountain Gringo Medium All-Natural Salsa ($4.99/16 oz.) and Trader Joe’s Chunky Salsa ($1.99/16 oz.) each garnered a score of 4.2 out of 5. What to do now? Super Bowls don’t have two winners and neither would our salsa showdown. It fell to Christine Han, COJ’s intrepid photographer, and me, to referee the overtime battle. We blind-tasted the two against each other and, to be honest, at that point, the winner seemed plainly obvious. 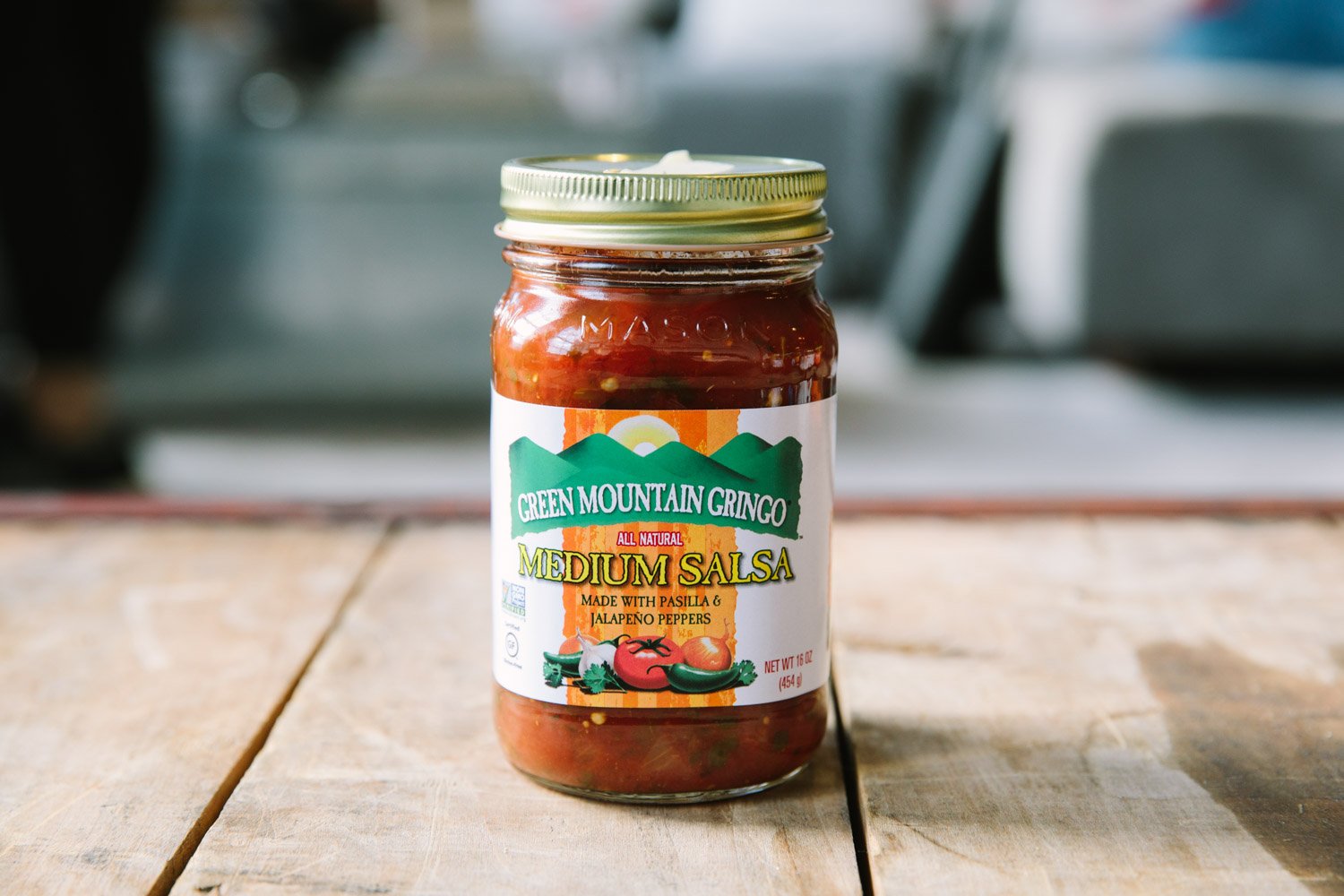 The Winner: Green Mountain Gringo All Natural Medium Salsa
Score: 4.2 out of 5 points (plus two decisive tie-break votes in overtime)
Price: About $4.99 for a 16-ounce jar

I was surprised by this, considering I’m a Trader Joe’s fan through-and-through, but the freshness factor of Green Mountain Gringo was unmistakably the best of the lot. “This would be great with eggs,” said one reviewer. Others remarked on its “subtle smokiness,” a “deep, rich pepper flavor” that “stayed in my mouth more than others.” And the ultimate compliment: “Tastes like childhood to me.” (I want your childhood, anonymous reviewer!) Plus, the chunky texture made it “appropriately scoopable,” a crucial trait for preventing double dipping at Super Bowl parties. Good to know!

As for our runner-up (or “First Place Loser” as its known in some circles of the sports world): Trader Joe’s had a “nice sweetness, not a sugary one” that made you “want to go back for more and more.” (That’s saying a lot when you have seven others to try.) “Way more complexity than most here,” said one reviewer, and, all in all, possessed “a good chunk.” Not to mention, the price is certainly right. 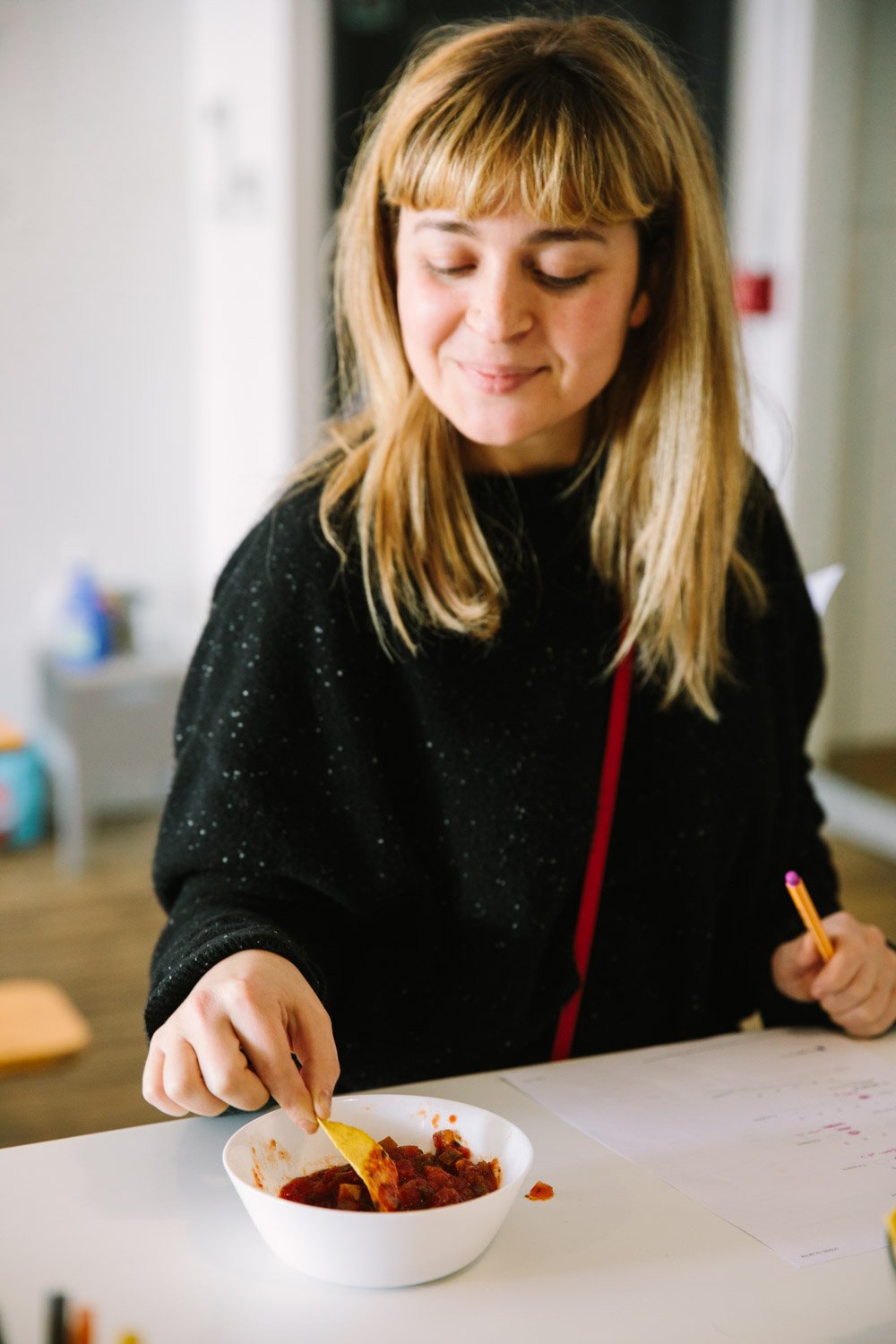 The others didn’t fare quite so well. Above, our friend Alexa considers the texture factor in Jar number 4, which we’d later identify as Old El Paso. “Too sweet,” and “very tomato-forward, not in a good way” wrote two separate reviewers about that one. Many remarked on the “mildly upsetting” watery consistency of Xochitl Chunky Style as well as its “marinara-y” flavor that “doesn’t linger” which is probably why it was our lowest scorer (2.52); Tostitos, Ortega, and Amy’s all scored a flat 3 which surprised me. Amy’s was the only organic brand in the round-up and was called out once or twice for its “complexity.” As one reviewer wrote, there’s “something special in there,” though I guess not special enough to take its team to victory.

A special thanks to our downstairs neighbors at Tattly who lent us their discerning palates for the afternoon. Thanks for playing, everyone!

What about you guys? What’s your favorite salsa?

P.S. Three-ingredient homemade salsa and how to make a Trader Joe’s cheese plate.

Just to let you know, you stated in beginning of text, salsas being tested were only national brands. I’m sorry, I live in Northeastern PA and your two finalists are not sold in any of our stores here. We have never heard of them. Just for future tests, it should be checked first.

I’m behind on my COJ reading because I’m on safari and have rarely had internet. However, I had to read this hoping my favorite salsa was one tasted and felt pure pleasure that it not only was tasted, but won.

I’ve bought Green Mountain Gringo medium salsa for the past, IDK, 12+ years. The ingredient list alone, as close to natural as one can get in a jar, coupled with the flavor and consistency has always made it my preferred brand.

Could you do one of these with instant hot cocoa? There are a lot of options out there!

I’ve been a faithful Green Mountain Gringo devotee for 20 years. The medium with roasted garlic is the hands down best jarred salsa I’ve ever had!

Here me out…Target’s Archer Farms restaurant style salsa is excellent. Everyone I serve it to loves it! https://www.target.com/p/restaurant-style-salsa-mild-16oz-archer-farms-8482/-/A-13013188?ref=tgt_adv_XS000000&AFID=google_pla_df&fndsrc=tgtao&CPNG=PLA_Grocery%2BShopping_Brand&adgroup=SC_Grocery&LID=700000001170770pgs&network=g&device=c&location=9003433&gclid=EAIaIQobChMI6emKm-Sf5wIVVoNaBR2YHwo3EAQYASABEgK_7_D_BwE&gclsrc=aw.ds

My mom and I tore up a jar of Salsa from Aldi and was only .99 cents. I was leery when she bought it but I was impressed. I’m buying that one whenever I need salsa on the fly.

saw it on cup of jo first!! lol

we saw the same thing! i think we had a brain match :)

No body can beat all the salsas that costco carries and the large jars!! And the prices and the Kirkland brand is awesome!!!

Mitchell’s Fresh salsa is my absolute favorite! It’s in the refrigerated section and tastes like something you would get at a restaurant.

In our college apartment we had cast-off furniture and dishes (as everyone does at that stage in life). We filled our drinking glass cabinet by saving the mason jars Green Mountain salsa comes in. It was a splurge on our grocery bill, but where we got double duty out of them we could justify it!

The Washington Post ran an article today agreeing with your winner! (Frontera was #2, for all the concerned fans out there.)

They tested Frontera chunky, but everyone knows their double roasted tomato is tops!!

Chili’s is the absolute best restaurant salsa. But since they don’t bottle, I like my salsa smooth not chunky. I mix Old El Paso Medium and Mild in the blender. The longer it sits in refrigerator, the hotter it seems to get. It’s a good blended taste and texture.

Hi from New Mexico!! Best salsa’s hands down for me, El Pinto and Sadies (both local restaurants here). I’m told by my friend who moved to New York that he was able to find El Pinto salsa on the shelves! Keep an eye out. You won’t be disappointed.

Sadies is our fave, recommended by a friend from New Mexico (but fortunately also available in TX).

Also from NM! Have you tried Pedro’s?

As someone who lives for salsa I clicked on this article to see if there where any new brands I should try. Admittingly, I have tried all of these and completely agree green mountain is by far one of the best supermarket jarred supermarket salsas I have tried. There is one more brand called Todd’s that I would recommend. I wouldn’t necessarily say it’s better, but it gives Green mountain some competition.

As a girl who grew up looking directly into Mexico from my window on the Texas side (seriously, I HAD THAT CHILDHOOD), I am excited to try the Gringo one (what stores sell it?). But, if you’re near an Aldi store, I can say with the greatest Tex-Mex confidence that the best grocery store salsa is Aldi’s Fire Roasted Tomato Salsa. It’s about two dollars a jar and you could literally puree it and eat it as soup. YUM.

Okay, Tostino’s Restaurant style is the way to go, not chunky. So good!

I agree that Frontera is the best! I reuse their jars as cups lol. I am surprised Xochitl didn’t score higher. It has a good garlicky flavor. I haven’t tried the Green Mountain one, but I don’t like chunky salsa unless it’s fresh pico!

It’s only available at Whole Foods (as far as I know), but Señor Fields salsa is far and away my favorite. It’s the salsa that made me give up on making my own, because I’d just be trying to replicate this.

Its up here in the Stop and Shop too at a better price. Also C Town. I’ve loved Green Mountain for so many years now – so glad to see it getting recognized here.

I am loving the passion behind these salsa comments! Nothing like a little ‘chip and dip’ to get a crowd going! xo

What a fun post! Aldi’s garlic salsa is incredible. We also use it to make salsa chicken in the instantpot. Green Mountain Gringo tortilla chips, strips, taste so much better than regular tortilla chips – no idea why.

I had a chips, salsa, and packaged guacamole tasting party once. It was so fun! This isn’t just for the coworking space, people! It’s fun at home at 4 pm on a random day off!

WOW people have strong opinions about salsa! As a Brit, it’s really not something that enters my world particularly often… am I massively missing out?!

Oh man!! Another reason for y’all to come to New Mexico…we need to introduce you to NM salsa and red and green chile :)

Yessss! El Pinto and Sadies for me

Right?! These jars are trash. Haha! I live in Florida now, but I grew up on a chile farm in New Mexico. I still have red and green chile and salsas shipped to me monthly. HOW could I ever live without it?

THIS IS MY SUPERBOWL!!!

As a born and raised Texan, I have to chime in here – my favorite store bought salsa of all time is from the brand Texas Texas. Gotta go with the Roasted Restaurant Style. I’ve tried a lot of different salsas over the years and nothing compares with this. I’m not sure if it’s available in stores outside of Texas, but you can order online!

I came here to suggest this brand too! The Borracho Bean flavor is the best, seriously just go ahead and buy the 6 pack. SO delicious.