This New Zealand Apartment Welcomes You With a Bright Yellow Door 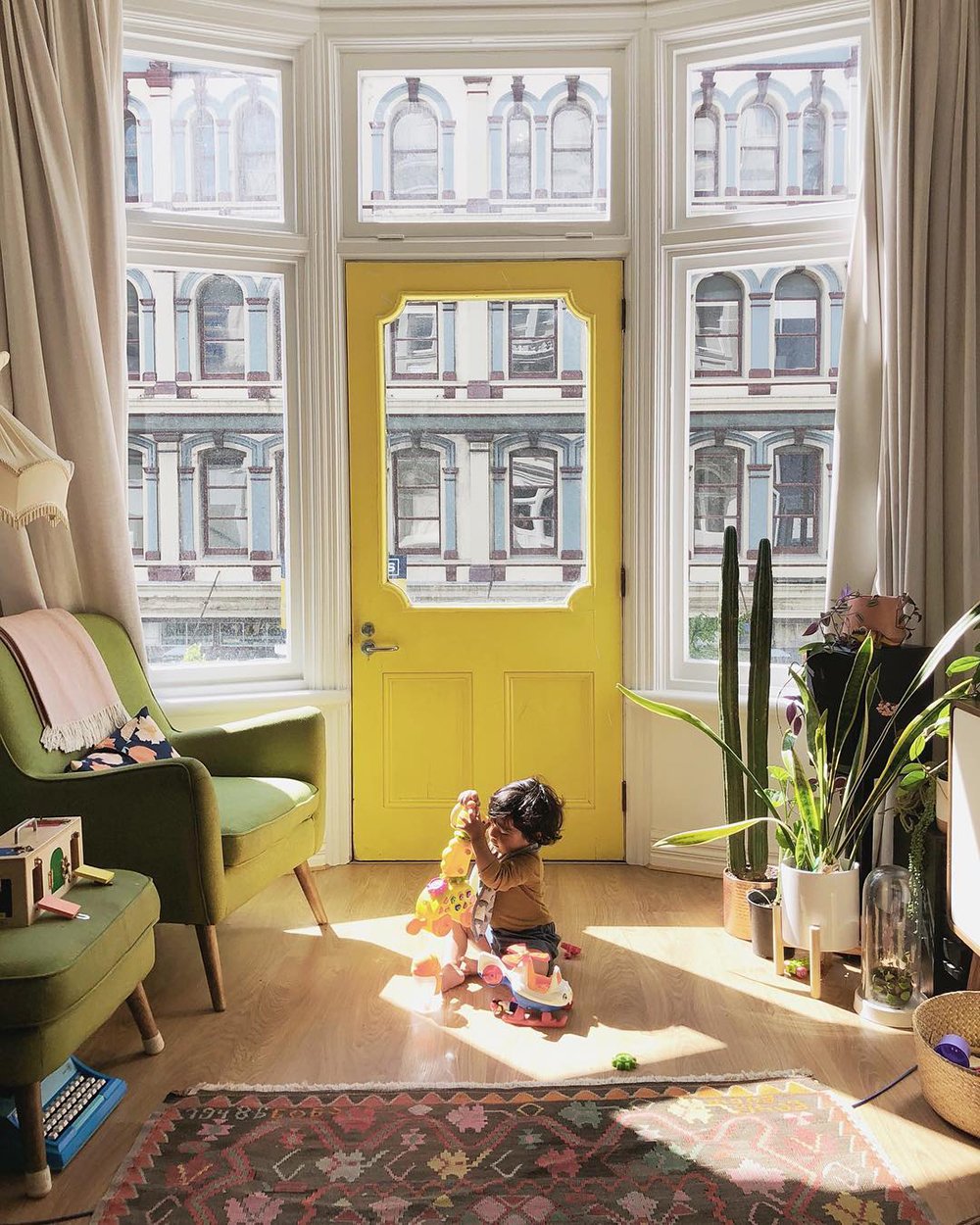 Ana Barbono lives in the center of Wellington City, New Zealand, with her husband, Rob, and their almost-two-year-old son, Aro. “I’m a former lawyer and political advisor, now almost two years deep into stay-at-home parenthood,” she says. “Our apartment is surrounded by historic buildings, a super windy waterfront, and the forest from Lord of the Rings.” Here’s a peek inside… 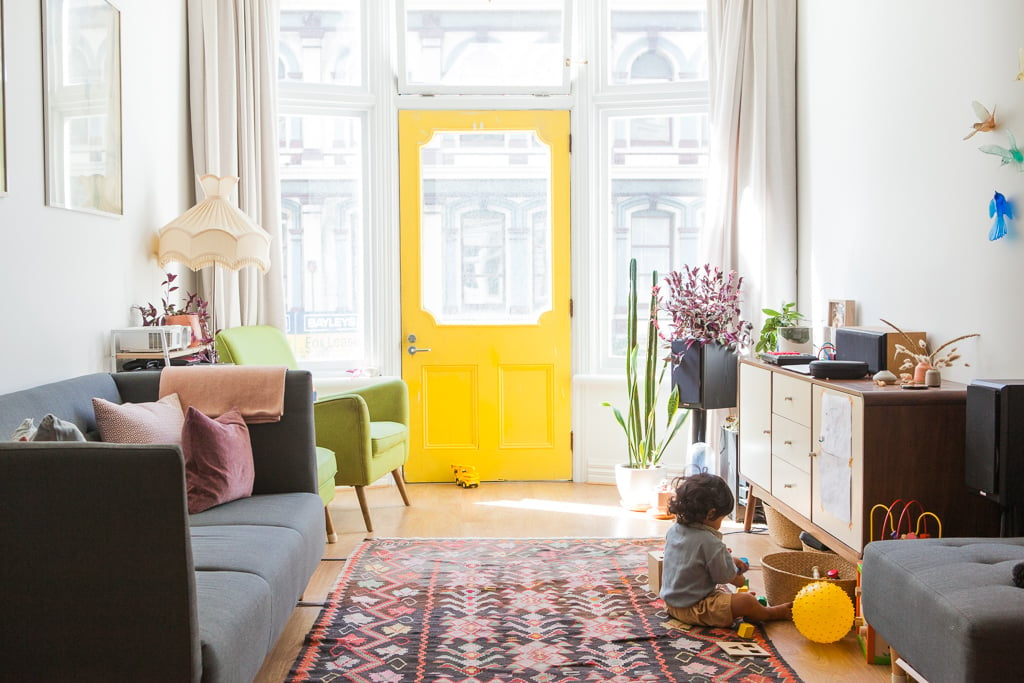 On a city view: Looking out onto buildings feels very metropolitan. The neighbors can see in, definitely. Across from us is a photography studio that specializes in pretend cover magazine shoots for teenage girls — for birthdays, etc. The second floor is always out and up late at night; it looks like a fun place to be. The top floor is a martial arts academy. We see them practicing. When we get dressed, we hide in the bathroom! 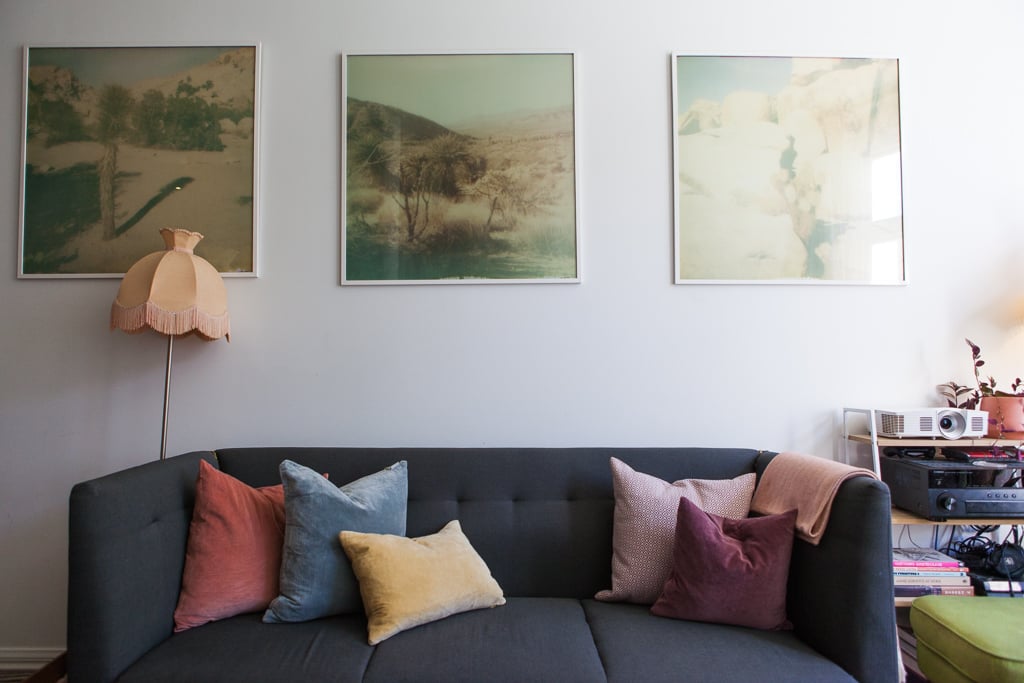 On personal artwork: I took these photos with a polaroid years ago, when we were traveling in Joshua Tree. For Valentine’s day, my husband surprised me with giant prints. I was very touched. To have him blow up my photos, as if I were getting ready for an art exhibit, was pretty amazing. 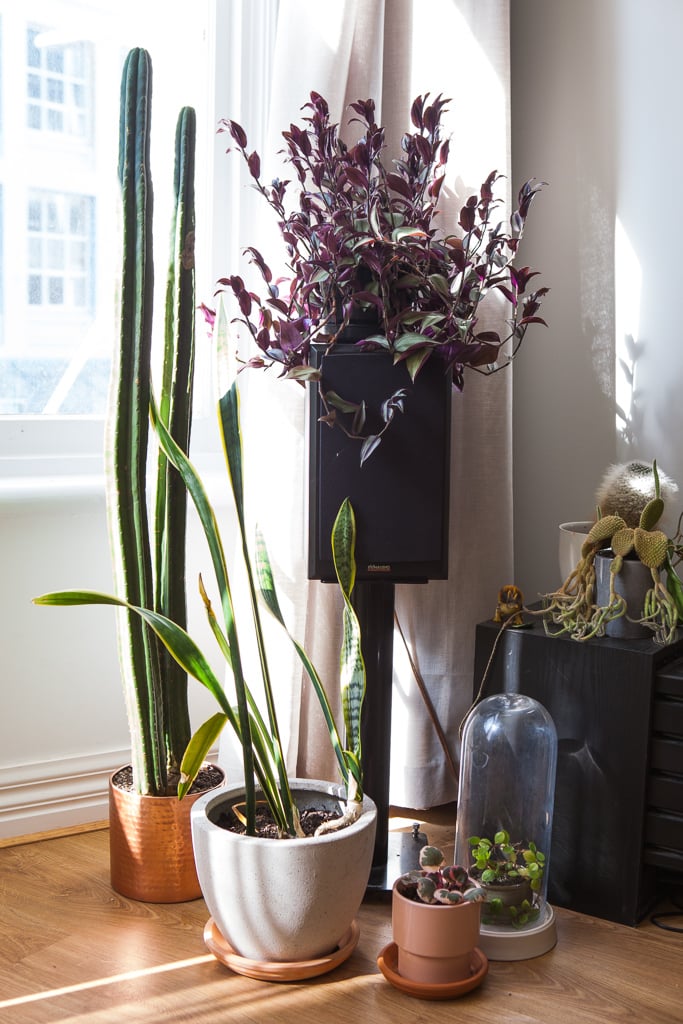 On TV shows: We watch a whole load of Netflix on the projector. I love the show Turn It Up, Charlie. It has Idris Elba; that’s what made me click. It reminds me of the ’90s sitcoms I watched growing up — like Boy Meets World, Blossom, Full House. It’s cheesy but I love it. 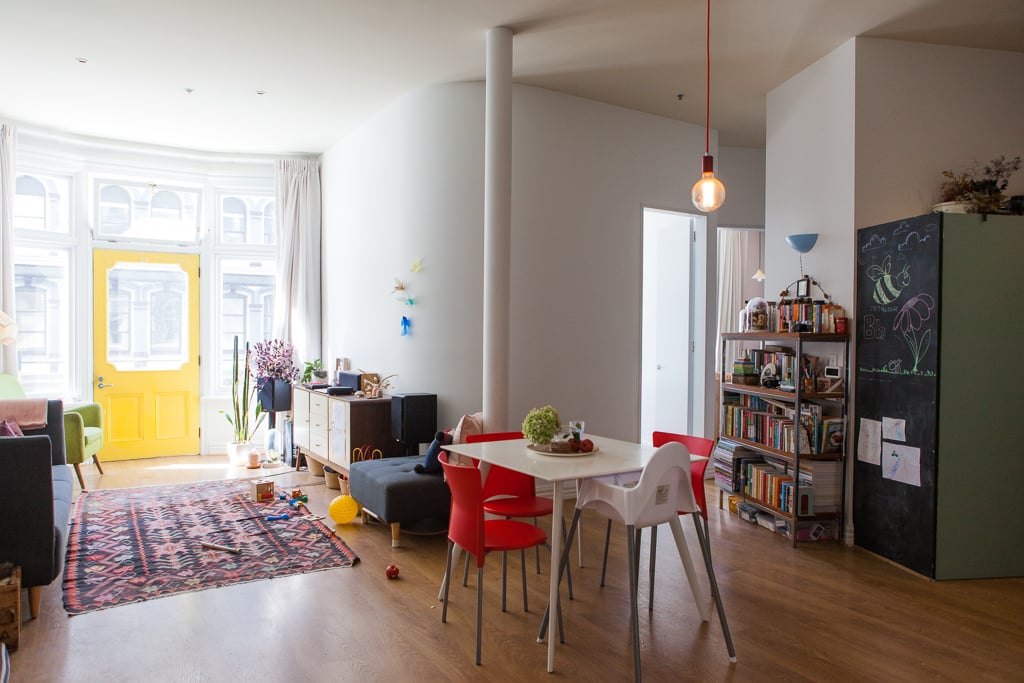 On a yellow door: Before us, the apartment had been populated by bachelors for years. Their smells lingered! We pulled up all the carpet and painted the walls bright white, but it felt like it needed more character. So, we chose a yellow door. I wanted something cheerful to look at as soon as we walked in. 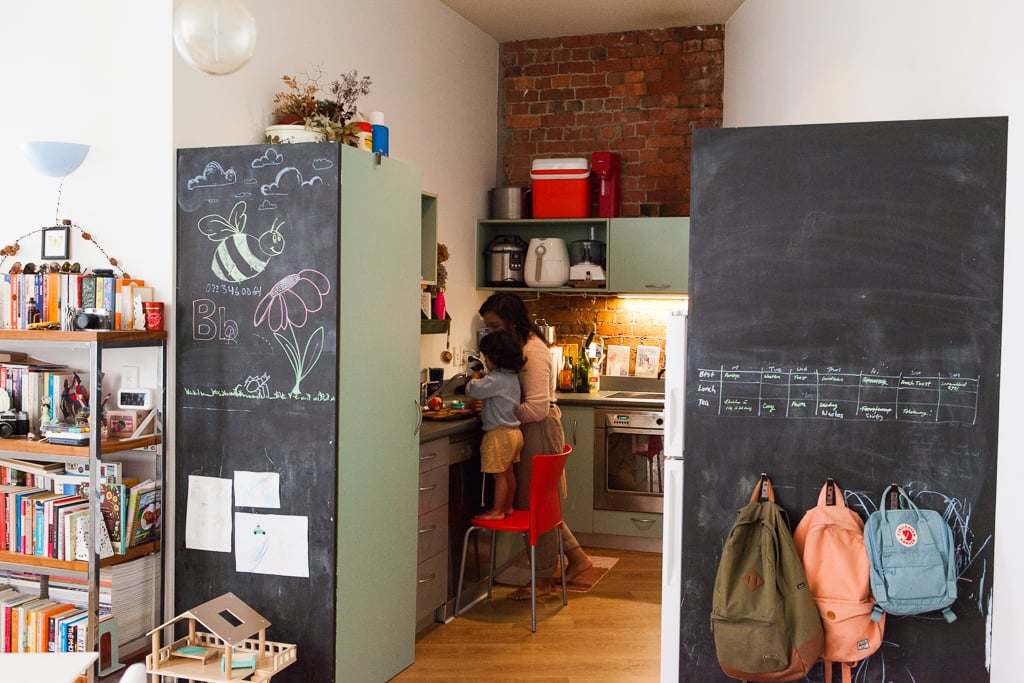 On kitchen art: People are like, do you really need to hang art there? But you do! That’s where you space out. We have a chalkboard wall, too, for meal planning and grocery lists and messages to each other. At the moment, we have a big bee for ‘B.’ We were intending to do ABCs, but we’ve just gotten to B. We’ll be at B for a while. 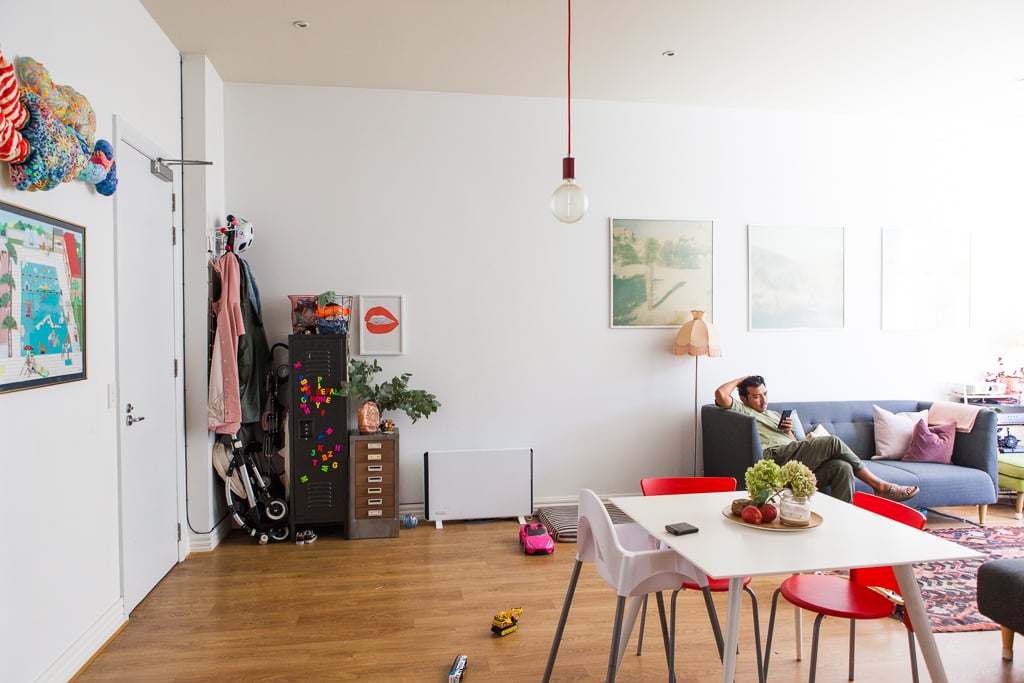 On comfort food: Rob is the chef of the house. He makes everything, including Nepali family recipes, but he recently got into a fried chicken phase. He became obsessed. He found a Bon Appetit video about the best fried chicken sandwich. It was a great time to live in our house and also to be friends with us. 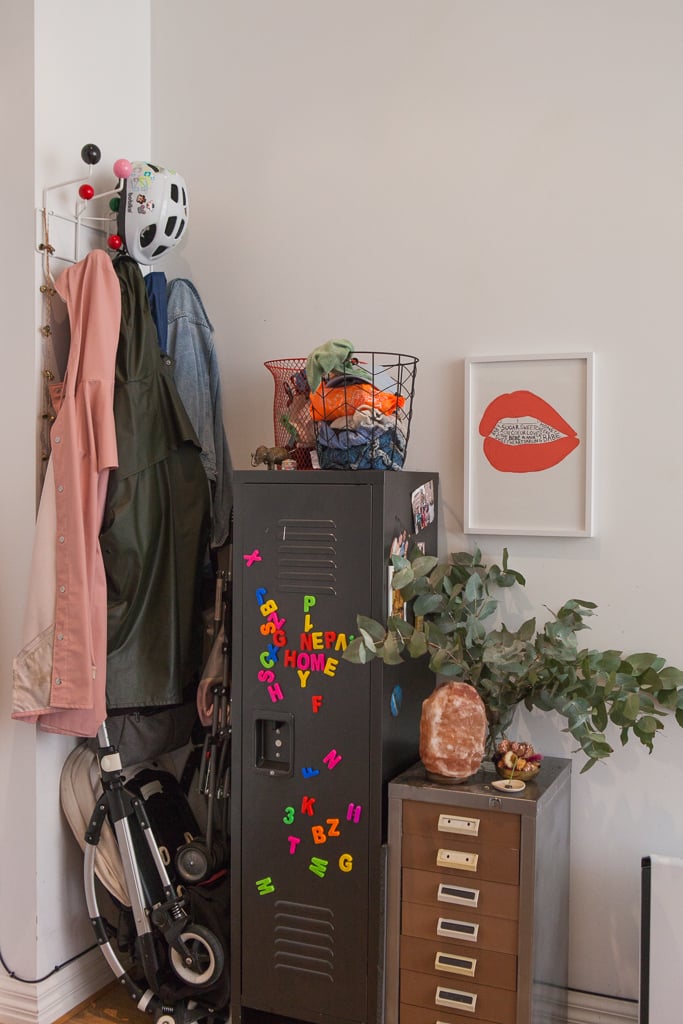 On a landing strip: Apartment Therapy taught me about the importance of a ‘landing strip,’ or a space by your front door dedicated to the things you shuck off as soon as you walk in — coats, shoes, keys, mail, dog leads. In small spaces, you’re much more subject to the visual noise from objects. Everything needs a place of its own. 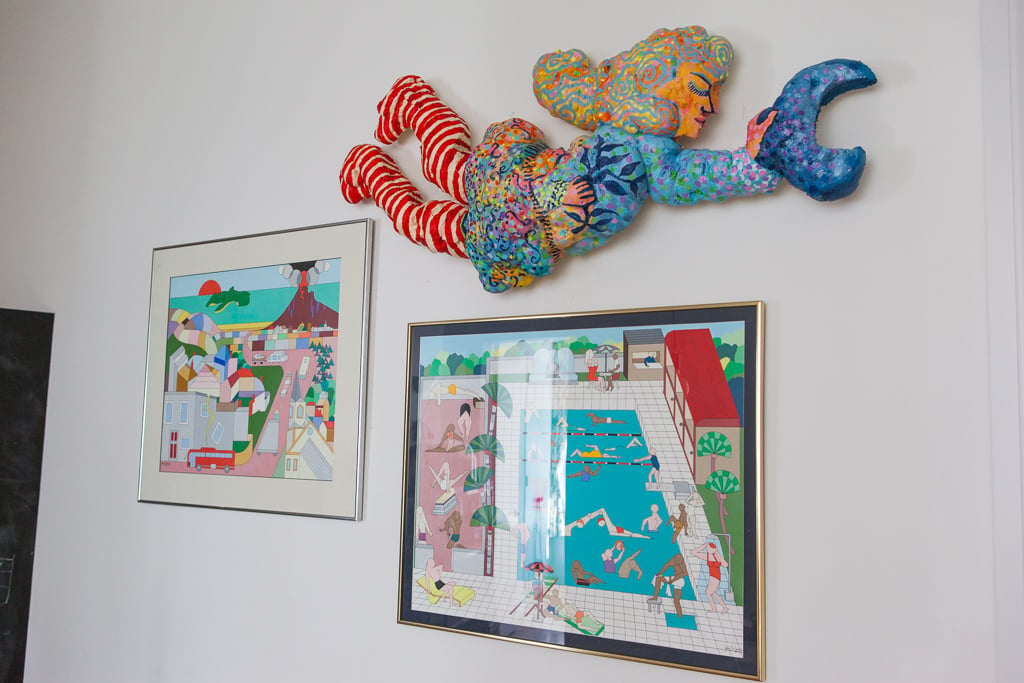 On meaningful art: Isn’t the woman peaceful? That’s what I love about her. She’s swimming with the moon, how badass is that? And guests always mention the volcano painting when they come in. My son just points to the bus. When he first pointed at it, I was so proud. My son is looking at art and appreciating it! As a parent, I was like, my work here is done. 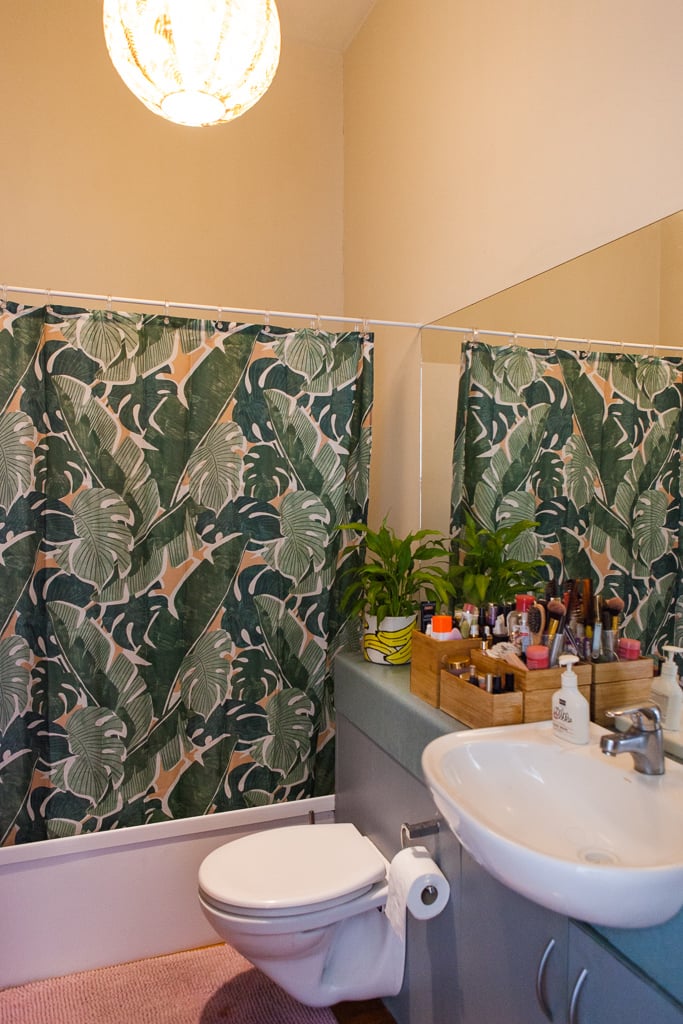 On brightening a windowless bathroom: When we moved in, the whole apartment was this sludgy brown color. It was like looking into a vast depression. So, we painted every room but the bathroom because we figured we would redo it. Six years later, we’ve managed to put up a shower curtain. But still! A shower curtain changes the whole look, right? 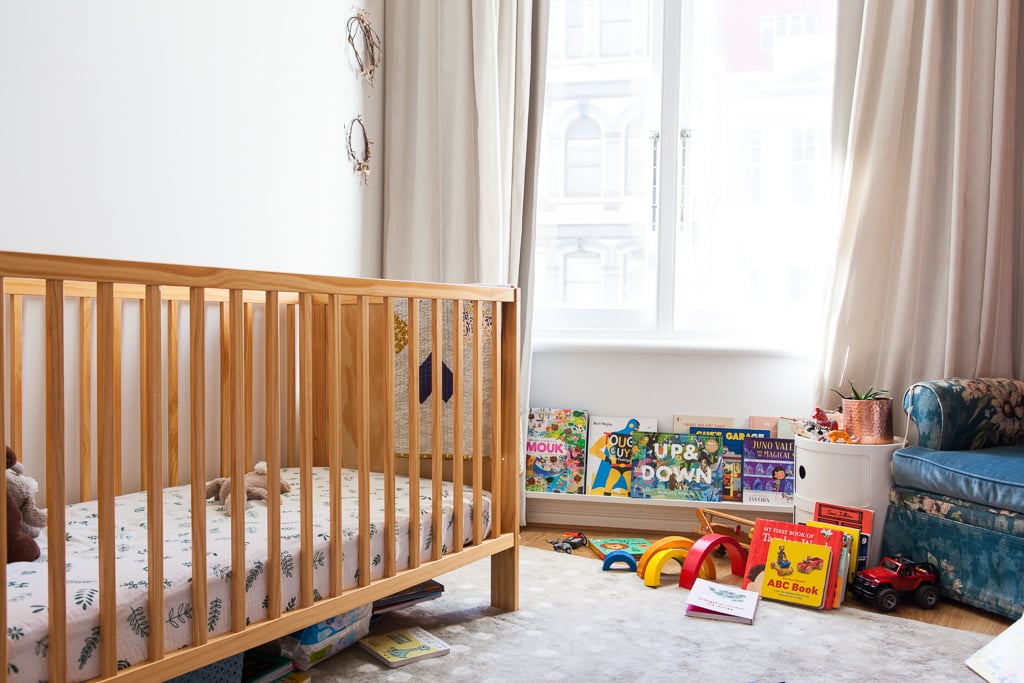 On favorite books: I’ve purposefully made Aro’s room not so much a play area — his toys are in the living room — so he knows that as soon as he walks into the bedroom, he will read his books and go to sleep. When the holidays were coming up, he got into this classic Kiwi book called A Kiwi Jingle Bells. In American Christmas books, it’s always snowy, but this book is about going to the beach, playing rugby and eating fish and chips until the sun goes down. You have to sing it to the Jingle Bells tune. He demands it over and over. 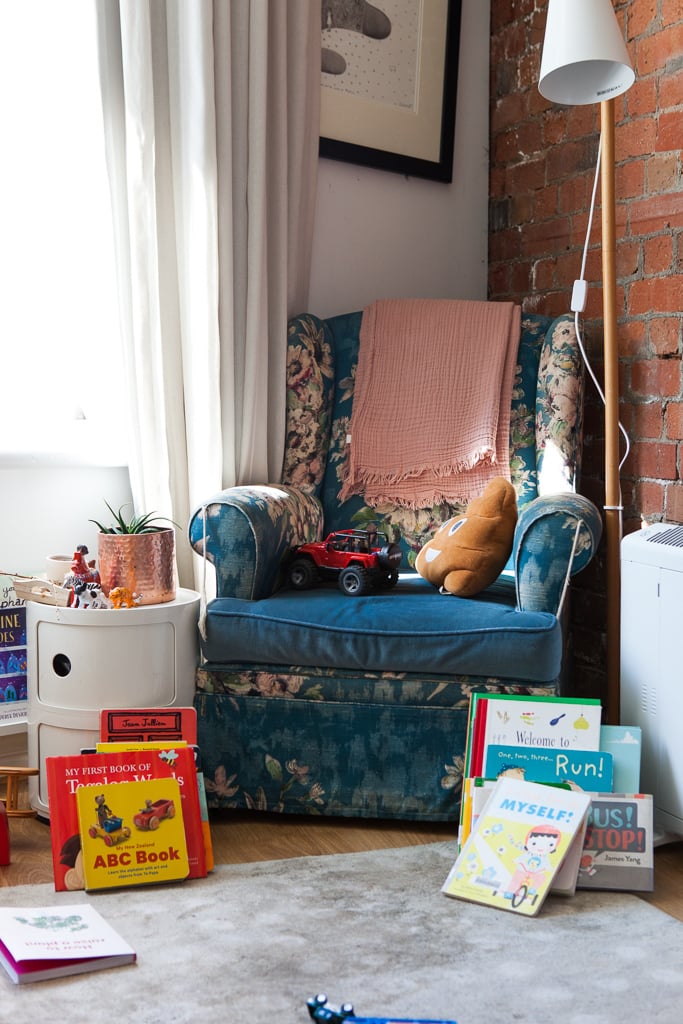 On a cozy chair: I bought this rocking chair from a thrift store for $30. The store was so close that there was no point in loading it into the car, so we rattled it down the path home. It was a labor of love for a $30 chair. But it’s so comfortable. A nice old granny probably sat in it for a long time and had a great time, and now I’m having a great time! It was my feeding chair when Aro was born; and when Rob was rocking him to sleep, he would fall asleep and stay in the chair all night. 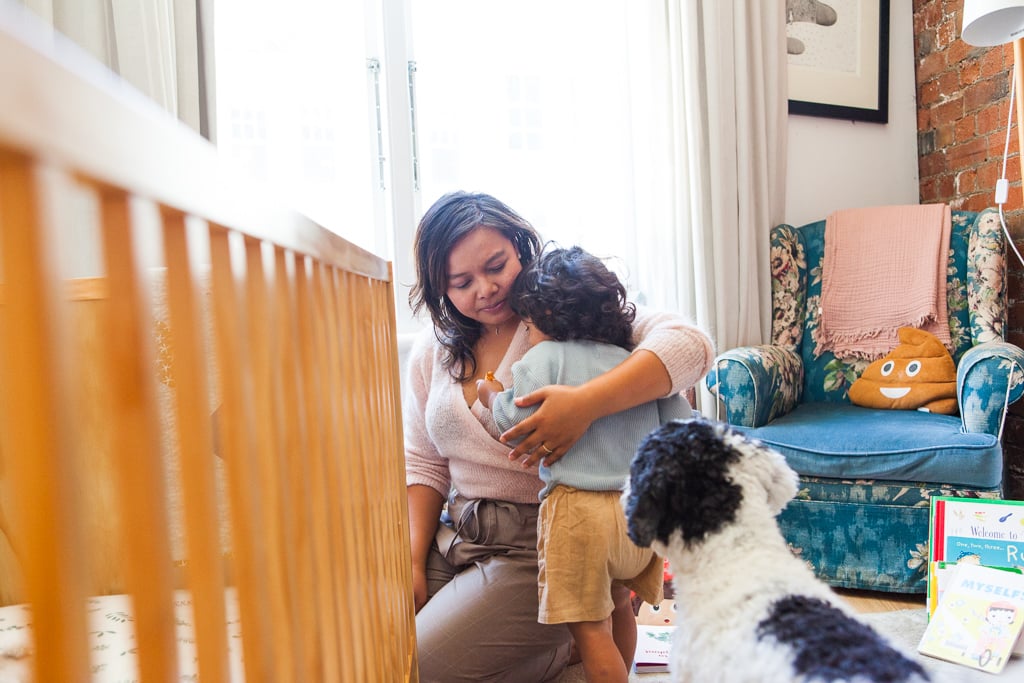 On nature: In Wellington, which is one of the windiest cities in the world, these kids always go outside. They’ll be out, living their lives normally, no matter what the weather is like. It feels so good to celebrate nature. 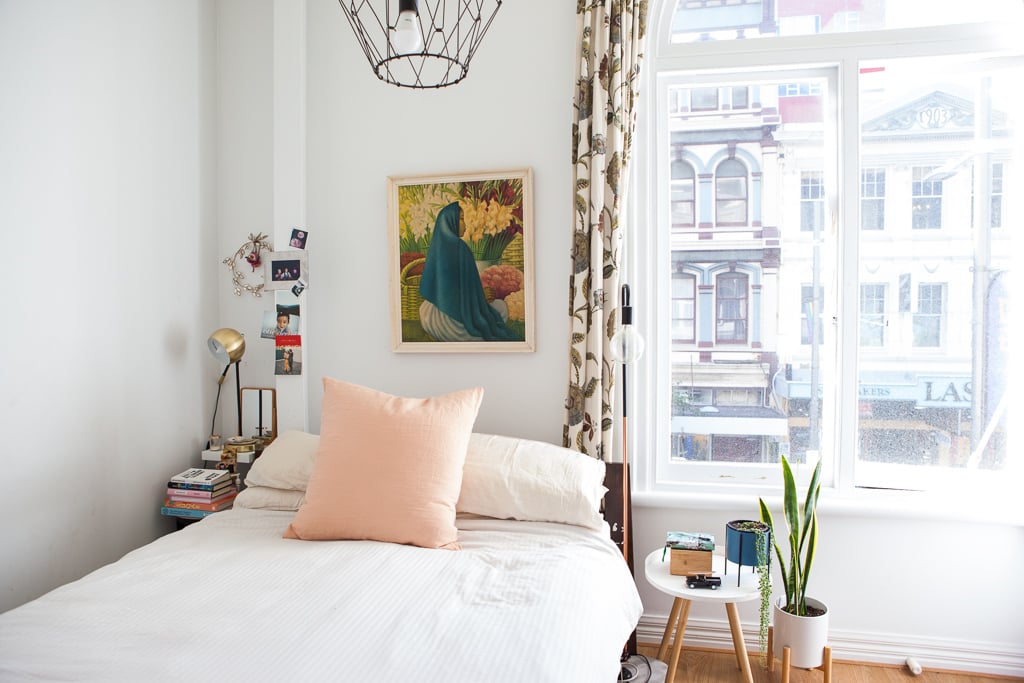 On bedding tricks: My husband Rob is a heater, and I’m always kicking him away. I like to be nice and cool. And you know that trick where you buy a smaller duvet cover and stuff a larger duvet inside it to make it look fluffy? Everyone’s got that goal of hotel rooms. It makes it look lush. 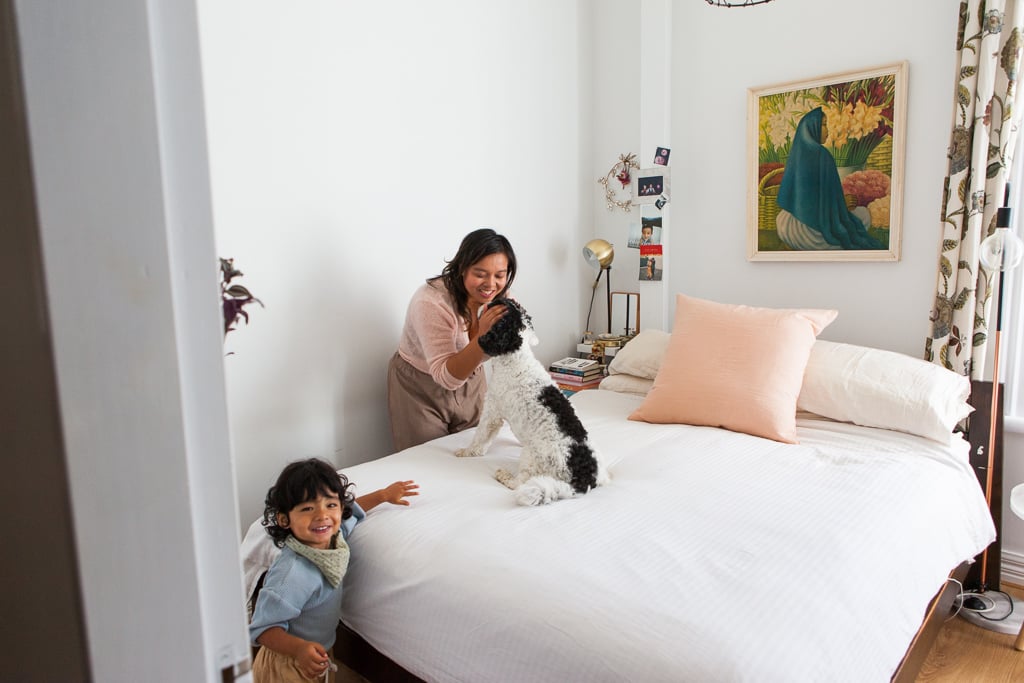 On bedroom art: This painting is called ‘The Flower Seller,’ and I love the colors. I change the artwork over the bed every season — something light for summer and spring, and something darker for winter. I also change the art around the house because otherwise you see it but you’re not really looking at it. 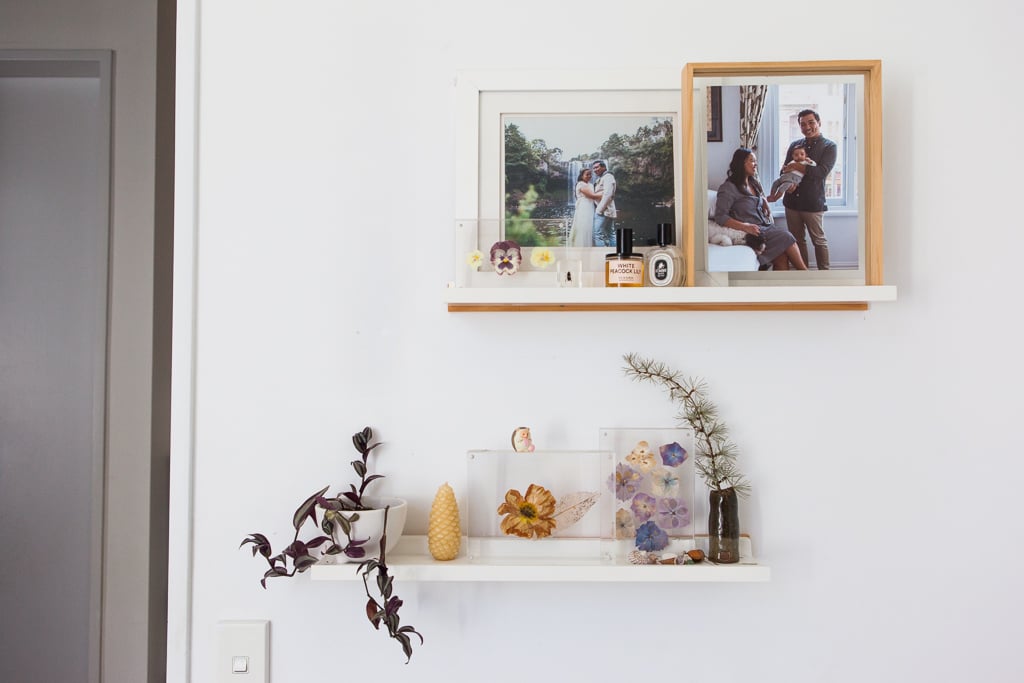 On bringing nature indoors: Rob put these shelves up for me, in a very haphazard fashion. I press a whole load of flowers and put them acrylic frames. In summer, I press hydrangeas, which is a classic Kiwi flower. In the winter, I do leaves — especially rotten leaves! When leaves are older, you can see inside them. 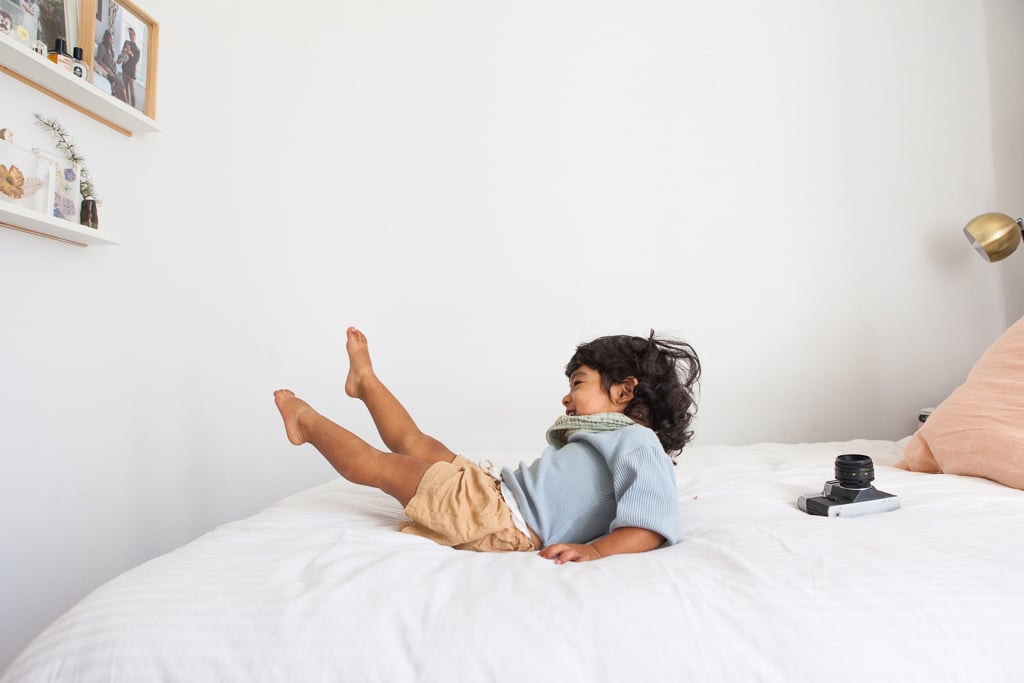 On a signature scent: White Peacock Lily by D.S. & Durga is beautiful. Even the copy you get with it is poetic, about fog and swans. Ahhh, I wanted to frame it. Before I bought it (because it’s quite expensive), I’d go into the shop, quickly spray it on myself and leave! I think the girls knew exactly what I was doing. It was getting embarrassing. It was time to make a purchase. 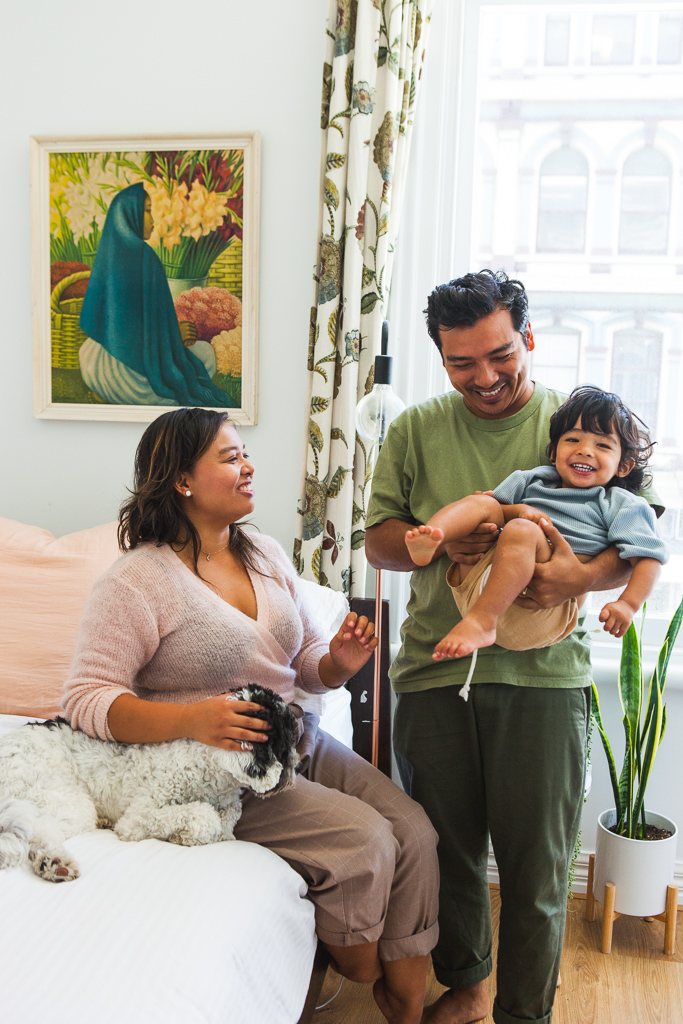 On the Christchurch shootings: Our prime minister Jacinda Ardern responded like a human being. That’s all it was. Obviously, she’s a great leader, but I also found it sad that responding like a human being deserves to be lionized and made iconic. That’s the bar? That should be the level we expect. She was responding like an empathetic person who realized that her country was devastated and 50 people had lost their lives. We need to change things not just on an individual level, but also on institutional levels, the gun laws, etc. I hope it continues. As she said herself, the reaction to what she did reveals a real thirst for kindness in the world. 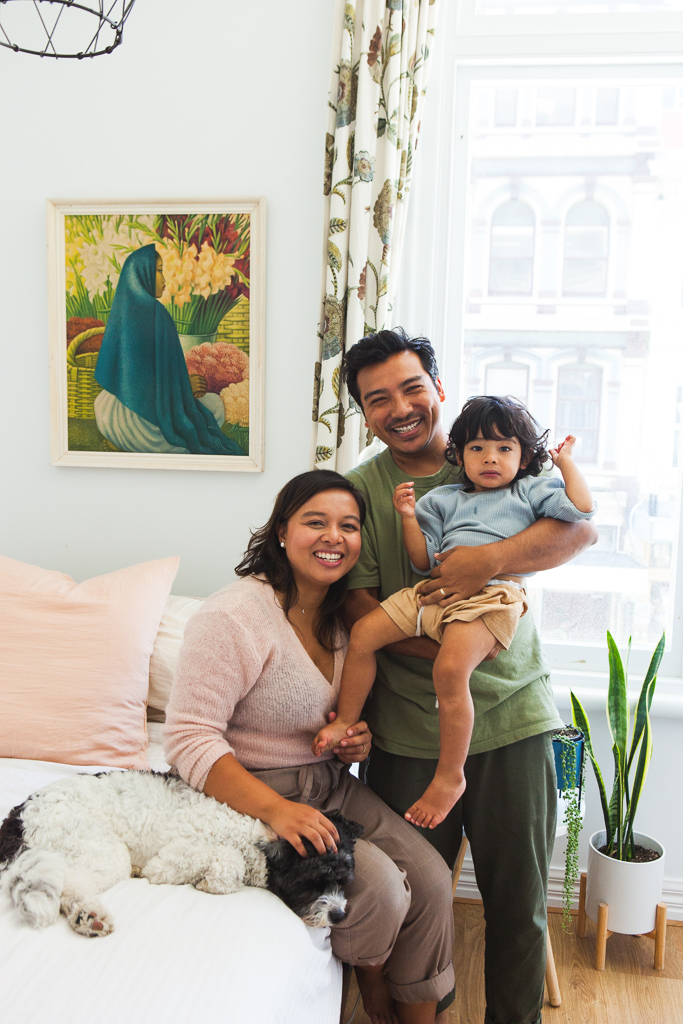 Thank you so much, Ana!

P.S. More home tours, including a downsized Sacramento home and a Connecticut spaceship.

(Photos by Peta Mazey for Cup of Jo.)

By Kelsey Miller
Design
This Apartment Is a Plant Lover’s Dream
April 23, 2019