Do You Kiss Your Children on the Lips? 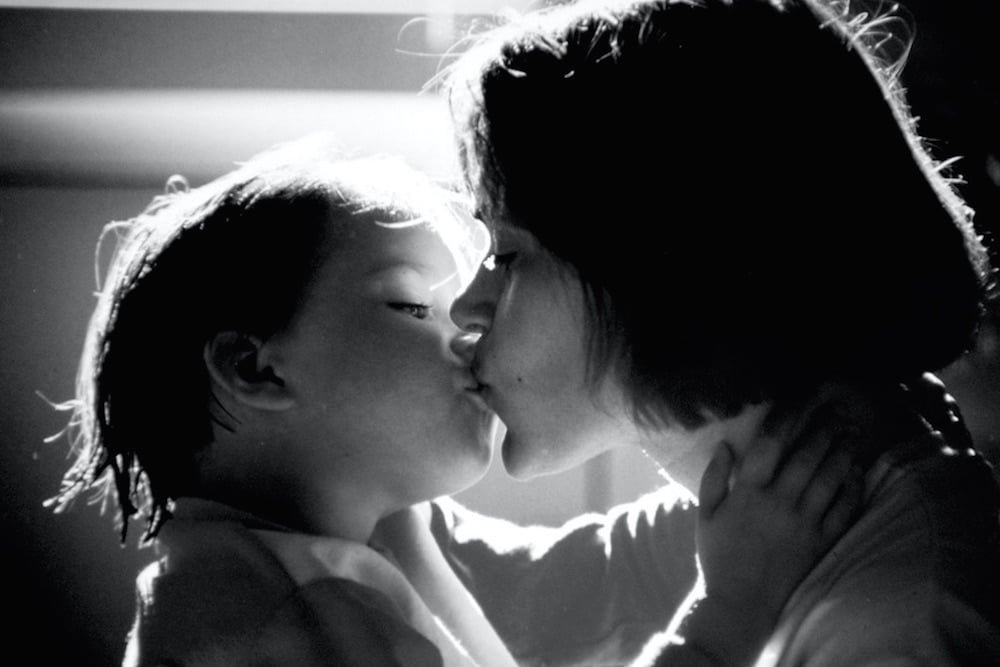 Toby is eight and Anton is five, and I still smooch them on the mouth. I kiss their hands, their foreheads, the perfect curve where their cheeks meet their noses. As a toddler, whenever Anton slept in our bed, all sweaty and kicky, he would wake me up in the morning by kissing little pecks up my arm. (The sweetest!) And there’s no feeling I love more than walking down the sidewalk, extending my hand back and feeling a tiny hand reach up and grab it.

But I’m curious about others?

My friend, Sammy, who has two young daughters, recently sent me this email: “During my 2 a.m. insomnia, with Edie snoring in our room, I was thinking about the intimacy between parents and kids. My own practices, really, of kissing them on the lips, bathing together, rubbing bums together in the shower while listening to Bollywood music. I certainly didn’t do this with my mom when I was 4 or 7. I’ve learned more about the importance of touch as a parent than as a young adult navigating the world of grown-up relationships. It got me thinking about the taboos around intimacy with our children and how some people think kissing your child on the lips or bathing together is inappropriate after a certain age. That’s it, that’s all I have to say!”

Where do you fall on the spectrum of physical touch with your children?

Of course, I will always follow their lead and be sure they’re comfortable with kisses, hugs and hand-holding. (They’re the bosses of their bodies!) Have you heard this beautiful, beautiful passage from the book Little Fires Everywhere?

“Parents, she thought, learned to survive touching their children less and less. As a baby Pearl had clung to her; she’d worn Pearl in a sling because whenever she’d set her down, Pearl would cry. There’d scarcely been a moment in the day when they had not been pressed together. As she got older, Pearl would still cling to her mother’s leg, then her waist, then her hand, as if there was something in her mother she needed to absorb through the skin. Even when she had her own bed, she would often crawl into Mia’s in the middle of the night and burrow under the old patchwork quilt, and in the morning they would wake up tangled, Mia’s arm pinned beneath Pearl’s head, or Pearl’s legs thrown across Mia’s belly. Now, as a teenager, Pearl’s caresses had become rare — a peck on the cheek, a one-armed, half-hearted hug — and all the more precious because of that. It was the way of things, Mia thought to herself, but how hard it was. The occasional embrace, a head leaned for just a moment on your shoulder, when what you really wanted more than anything was to press them to you and hold them so tight you fused together and could never be taken apart. It was like training yourself to live on the smell of an apple alone, when what you really wanted was to devour it, to sink your teeth into it and consume it, seeds, core, and all.”

P.S. Naked babies at the beach, and who get the best kisses?

When my first child was a baby I would kiss her on her lips, but I would get sick all of the time from the germs she carried but didn’t make her sick. So I stooped and none of my 3 girls got kissed on the lips anymore. But they all took baths with me, the youngest until she was embarrassingly old to be doing so… Affection is what is important, however you show it!

I’m embarrassed to kiss my parents anywhere, especially my dad. I sometimes hug my mum, but I can’t find the courage to hug my dad.

We have the same name ?

I’m 50 and still kiss my parents, children, and grandchildren on the lips. Aunts and uncles too. It is just something that we have done for multiple generations on both sides of my family.

My parents would kiss my sister and I on the lips when we were little, and at some point we switched to cheek kisses. My dad, who’s much taller than the rest of us, has always given kisses on the tops of our heads. It’s one of my favorite things and something that he’s done when we’re sick, before proms, dropping us off at college, and I’m sure he’ll always do :)

I noticed that my 5 year old son stopped kissing me on the lips when I dropped him off for preschool. I asked him about it casually and he responded, dead pan, “Because it embarrasses me in front of my friends.” It stung. (We’re an incredibly affectionate family: kisses, cuddles, baths, etc.) But within moments I was so proud of him. He was honest about his body and his feelings and that is what I value….even more than kisses.

We’re in the process of making up a secret handshake instead :)

/your response is so mature and sweet.

When I was a kid I saw my Grandma once a year and every time we said goodbye she’d give me a kiss on the lips. It’s a beautiful memory of mine. I loved my Grandma more than anyone.

So very beautiful for you to have known the value of your grandmothers love and affection?

I never had the kind of physical connection and closeness to my parents. They were loving and caring but traditions came first. I changed all of that with my three boys. We kiss on the lips, we cry, we hug, we snuggle, we hold hands. It is an incredible connection. My older two boys have started to only kids on the cheeks. My second boy who is 10 still likes to hold my hand. He says, “ I don’t care what my friends think because I love you.” My 2 year old is attached to us. He still longs for skin to skin. He gets giddy and excited when I come to bed with a tank top on because I can wrap my bare arms around him. He kisses and snuggles my arms and buried his chubby little face against my chest. It’s perfect. Never break with these traditions. It’s builds connectiveness and provides such comfort to my children. My almost 13 year old will sit super close to me, just to connect. He will just read and lean over to show me a smile. It brings me the kind of joy that is hard to replicate.

This is so beautiful that it made me cry a little thinking of my own son and how I hope to build a connection like this. Thank you for sharing.

I grew up in a family that wasn’t affectionate. My mom was really selfish and emotionally unstable and just messed up with us in loads of ways. All 3 kids are scarred to varying degrees from our childhoods because of parents who might have outwardly seemed to have it together but we’re just dysfunctional at home. No abuse or addiction or anything like that, just garden variety dysfunction. I’m not explaining this well. Anyway, when we became adults, out of the blue, my mom turned into a hugger and wanted to be really affectionate with us, patting us on the bum too. I hated it. I felt like she had missed her chance to be loving and she couldn’t just turn around and pretend we were all different now. I felt so resentful. She’s kind of aggressive about taking those hugs and patting us on the bum even when we tell her to stop. I know CoJ has talked about conveying the concept of consent to kids from a young age before. I think it’s so great for a kid to be “the boss of my own body” and I’ve implemented that with my own daughter. On the mouth kissing, it’s not something I do with my own two but it wasn’t a conscious decision. My youngest is 7 months and I guess his chubby cheeks and baby double chin are so deliciously perfect to kiss that I’ve never felt the desire to plant one on his lips!

Both my husband and I kiss our 10 year old boy/girl twins on the mouth. And will likely continue this practice the rest of our lives. We also kiss our parents/siblings and various in laws on the mouth or cheek, whichever feels appropriate. Affection is not disgusting. We definitely hold off when we orcthey are sick!

My mum still kisses me on the lips, and I’m 34. :) Saying that though, it’s always her who initiates it. I’m not sure I would, but if she wants one, I’m more than happy to oblige. :)

When I was a kid, I would also kiss my dad on the lips, but that sort of naturally stopped when I was maybe teenager-aged.

I remember having baths with my mum, until I was maybe 7 or 8. I also had them with dad a few times. It wasn’t a big deal.