Before and After: How to Make Your Recipes Look Amazing 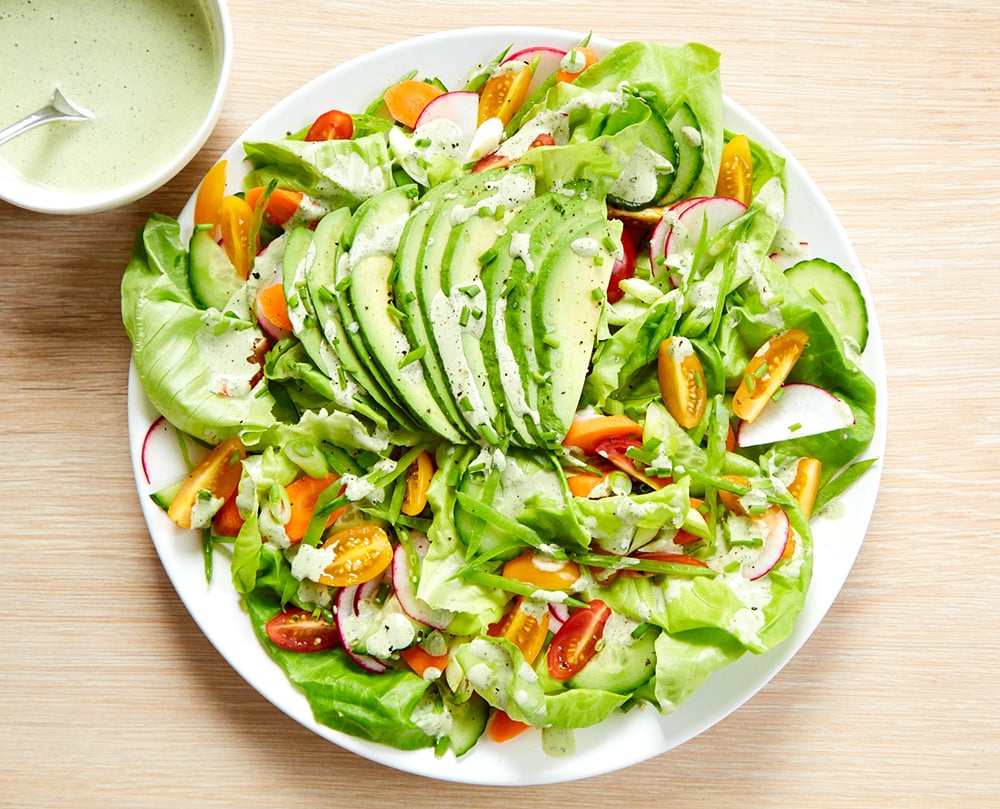 Ever wonder why the cookbook photo of the dish looks so much better than what you just served — even though you followed the recipe to the letter? Well, over the past few years as a food writer/Instagram enthusiast, I’ve realized that…

…a lot of the beauty of a dish comes from how the components are sliced, especially when it comes to vegetables and salads. There are a few techniques that have brought me ridiculous amounts of satisfaction, with barely any effort expended. Here how to do it. 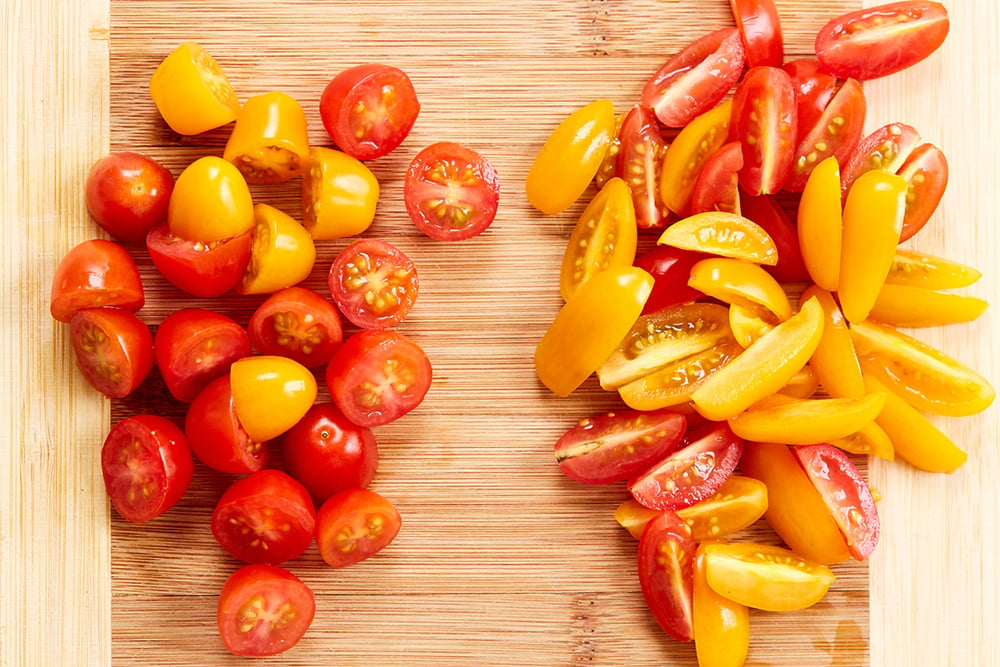 Take tomatoes for instance. I swear, ever since I learned to cut the little grape ones horizontally into quarters (right) as opposed to halved across its belt (left), it has upgraded the way my everyday salads taste. 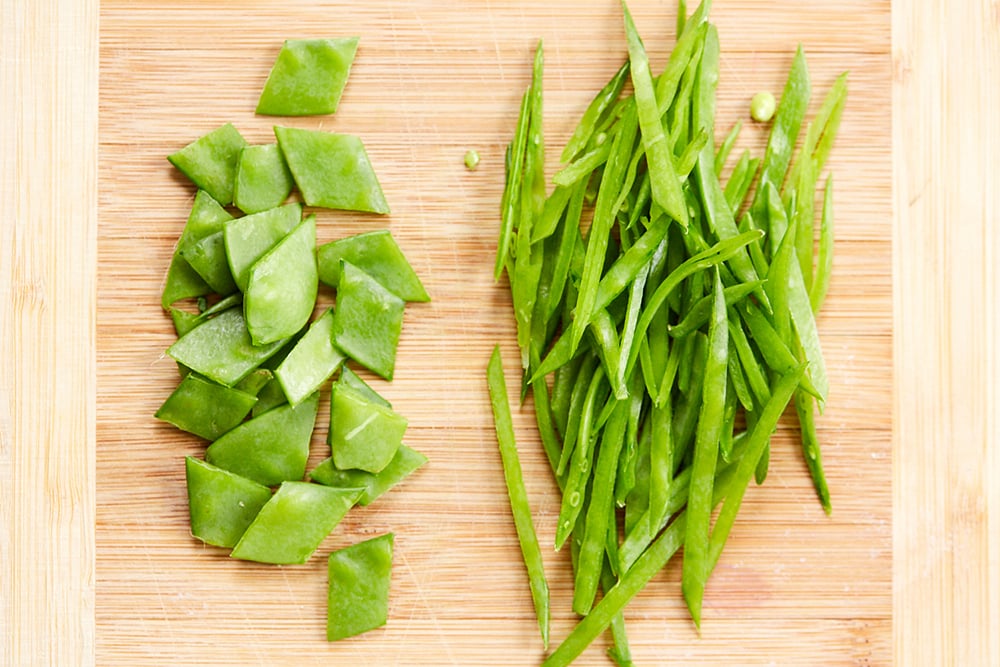 And eating a properly sliced snow pea has the same effect. Instead of chopping them into graceless squares (left), I now slice them into thin strips lengthwise (right). It’s a little fussy and you might be questioning your sanity as you do so, but persist! I promise they will taste better when their consistency is crispy as opposed to chunky. 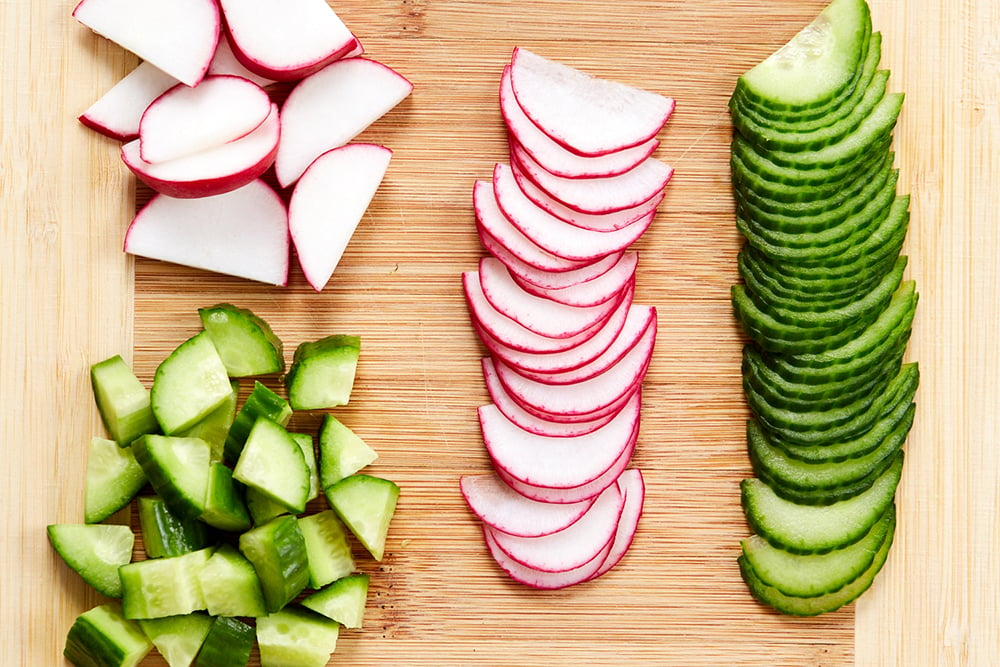 With vegetables like cucumbers and radishes, I like slicing them thin to the point of translucent. When they’re thicker (left), they dominate whatever forkful they find themselves in. Plus, they look so graphic in rows atop a salad before you toss it. (You would be forgiven if “graphic” is something you never considered missing in a salad until now.) To get the half-moons, I halve the whole vegetables before slicing. 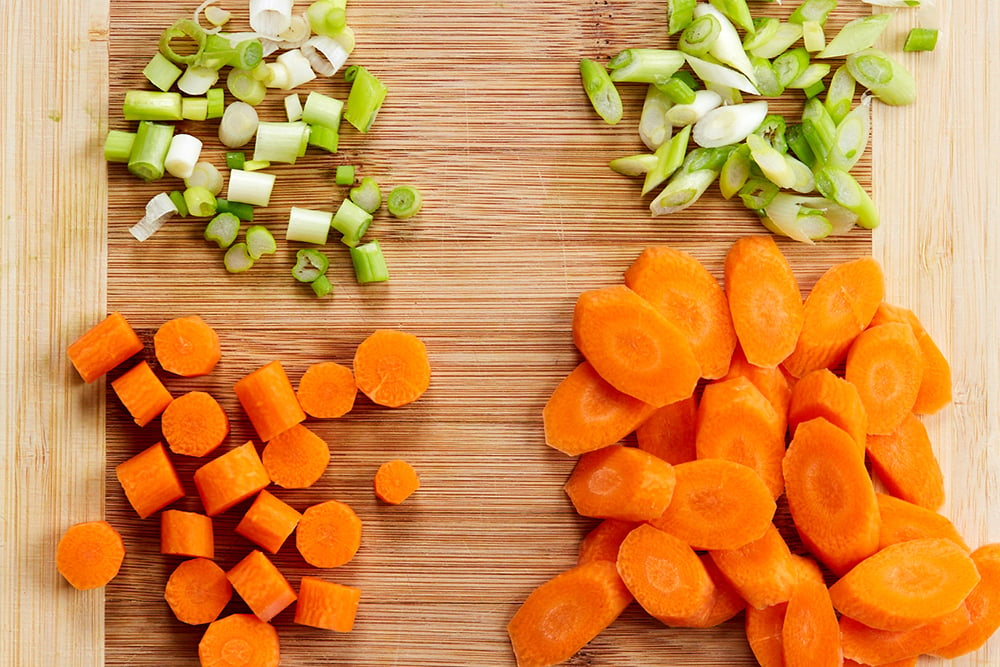 When it comes to long skinny things, such as carrots and scallions, you can’t go wrong with slicing on the bias (right). That means your knife is angled, almost-but-not-quite parallel with whatever vegetable you are cutting. 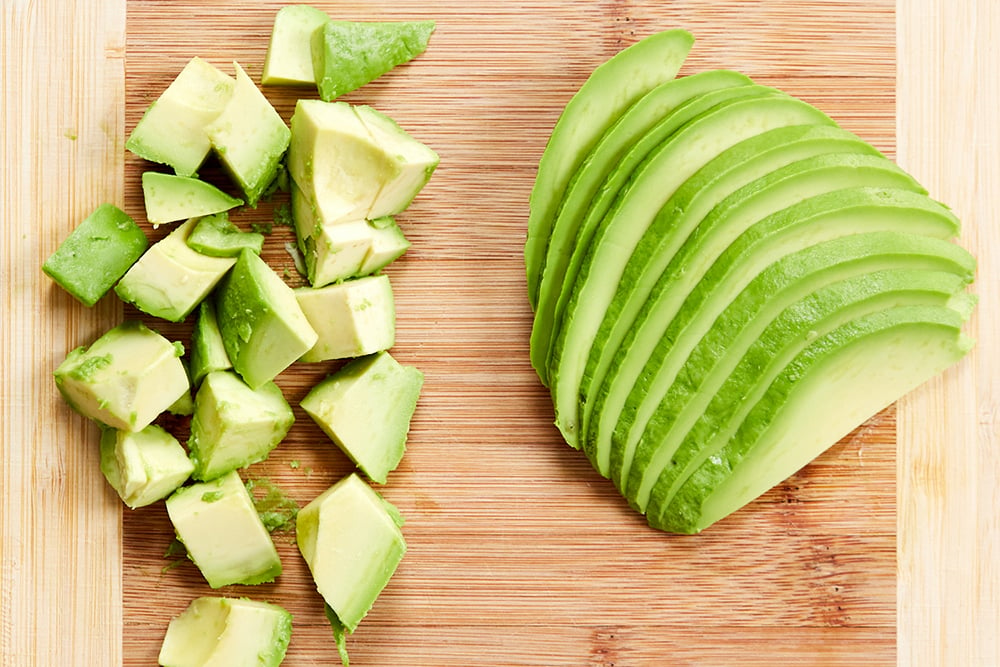 If you learn only one thing from this post, let it be the proper way to slice an avocado, measured strictly by the “look-at-those-avocados!” compliment you receive when serving it to someone. In darker days, I used to slice the flesh right in the shell in a grid pattern (left) which no one will arrest you for, but once I learned how to fan the insides (right) a whole new world of pretty opened up. To do this, halve your avocado the normal way, peel off the skin, then slice the half, cut-side down, into thin strips. 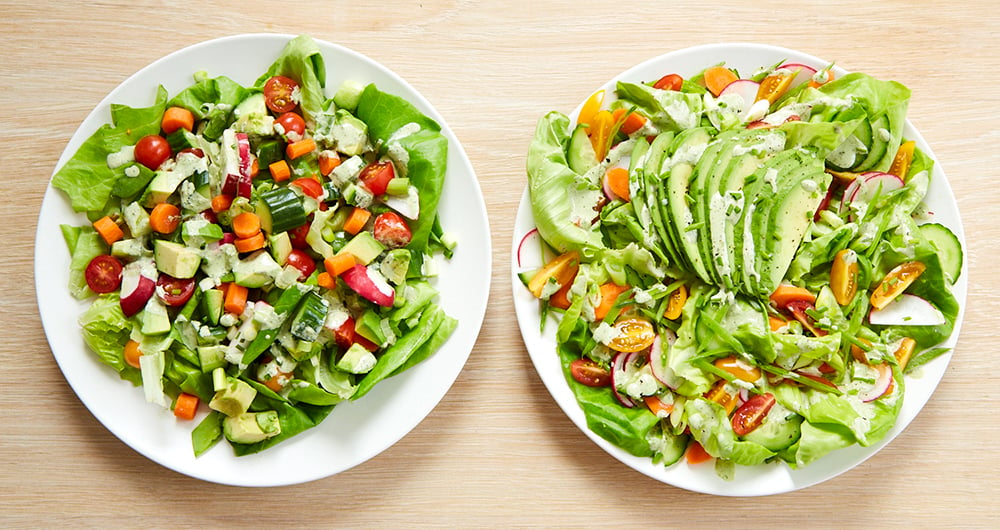 Does the one on the left look bad, per se? No, of course not; we’d all be crazy not to dig into it immediately. But, by comparison, don’t you just have an uncontrollable urge to click the like button a thousand times when you see the one on the right? That avocado! Those radishes! Someone get me my phone… and a fork.

This is fab – it’s crazy how such a small change really makes a huge difference to the overall look of the dish!! I need to memory bank that!

Commenting superlate to say that I cut my snap peas like it was recommended here for a quick stir fry tonight and they came out so much better and my toddler ate them! Yay!

This was such a helpful post! It made me want to eat a salad and I will definitely cut my veggies like you demonstrated from now on. Thank you!

Fantastic and inspiring post! I had put little thought into this previously, while taking what I now realize were very boring pictures of my food for Instagram posts. My next shot will be a work of art! *snap :-)

What kind of DRESSING is that? It looks so fresh and yummy!!

both salads look lovely to me! i want to eat both!

This feels like a stupid question but does anyone have any tips for learning how to best slice or cut ingredients, either for salads or in recipe? I never learned and now everything takes me so much longer to do than most people, according to the estimated recipe times. (If it says, “while these bake for 15 minutes, chop those,” it will inevitably take me 30!)

I found that a smaller knife works so much better for me. I feel more in control of it and it is easier to manoeuvre. The knife I use also has a round edge in the end. Maybe finding the right knife might help! Also, before I start a recipe I cut and prep everything before hand as it always makes things easier and more enjoyable :)

Just YouTube! Pick a vegetable and search “how to cut” or “how to slice.” I learned from YouTube and I’m always getting compliments on my finely-sliced and evenly-diced vegetables… which is weird, but hey, why turn down compliments?

This blows my mind. Similarly to how, when growing up, my family was strictly a canned vegetables/iceberg lettuce/dry carrot sticks family, so when I visited a college friend’s house and there were fresh sliced veggies or even roasted fresh veggies with seasoning, I was just blown away. Or how much better massaged kale tastes!

100% related to this comment so much. I grew up on canned and microwaved everything and remember having such secret revelations in my head in college when I started eating fresh veggies with buddies and their families.

I am so here for this! I am often the food envy of my co-workers because I actually take the time to plate my food nicely. It’s a moment of joy at an otherwise mundane lunch.

So interesting, I actually prefer the image of the tomatoes cut on the horizon… I think it is because the color is more robust without the exposure of the long pithy tomato membrane. Regardless both are beautiful.

I cannot wait to try the snow peas thinly sliced. I have always loved snow peas as a solo snack or in stir fry but avoid them in salad because the raw chunks are reedy and annoying among other salad ingredients. Great tip!

I love this post – we truly do eat with our eyes. I am 100% precent craving salad RIGHT NOW.

I love tips like this, and used them last night for our salad! Really did make a difference.

On an early date with my now-husband, we made pizza and salad at my house. As he began to cut the cucumbers into thick chunks I yelped “What are you doing?!”, grabbed the knife away from him and began to very thinly slice the cucumbers into translucent slivers. About 3 second into doing this I realized he might think I was totally insane and not want to date me, so I sheepishly returned the knife to him and apologized profusely. We now laugh about this moment (and my controlling ways about how to slice salad vegetables), but this post has confirmed that, actually, I was right all along!

Either way, eat your vegetables!

Lol. Mom says……..
You made me laugh so loudly. And I have to agree. Eat those veggies folks!

Love this! Strange how making a dish “pretty” can make it more fulfilling, and the shape of something can change the taste, to me at least… shaved deli meat vs. thick slices, pretzel sticks vs pretzel shaped pretzels (why are the sticks sooo much better?!).

One little chopping trick has stuck with me. We were in Boston several years ago and went to Tatte where the yogurt/muesli had apples sliced in thin straw like pieces instead of chunks or slices (think shoestring french fries). !! I just had it this morning at work and I always feel FANCY when I’m in our office kitchen making my Tatte copycat bowl. Someone always says “that looks GOOD”… Google image it– you’ll want to start doing it that way too, and your coworkers will wish their breakfast looked as fancy.

I love Tatte, Callie! You’re so right about the apple slices.

May I ask what dressing Jenny used for this salad?

she used green goddess dressing by gotham greens — it was DELICIOUS!
https://www.instacart.com/whole-foods/products/19006556-gotham-greens-dressing-dip-green-goddess-10-0-fl-oz

My life has been forever improved thanks to this post.

I have been waiting for this post for my whole adult life. THANK YOU!!!!!!!!!! I can’t wait to make a more tasteful and harmonized salad!

I call these composed salads : they are so pretty and do photograph well for instagram @mangotomato.

Once I take the photo, I add all the ingredients to a large bowl with extra dressing and mix them up :)

Very fun post to look at!! I’m with you except on the avocados- I think they taste better in chunks, rather than in slices. (although the slices do look better) I have another tip I’ve discovered recently. When using large seasonal tomatoes, I like slicing them thinly and fanning them out on the side of the rest of the salad. I spoon a little vinaigrette on them, or pesto. They look prettier and are they are tastier :)

My biggest aha moment in slicing was this Bon Appetit recipe. They suggested slicing the celery thinly on a diagonal while having the two side end facing you instead of facing down (wow, Food writing is difficult! have a look at the picture it comes with for better understanding haha)
Also my favourite BBQ salad to bring as a Vegetarian – always big praises by everyone (even the celery haters).
https://www.bonappetit.com/recipe/celery-slaw-with-seeds-and-dates

I read this yesterday and thought about it first thing this morning while I was slicing cucumbers for my daughter’s breakfast pickles (weird, I know). What a nice article. This is the kind of cooking advice I need. So simple but I feel like it will help me every single day!

Any tips for how to deal with applying salad dressing or sauces?

Love this SO MUCH. What a fun little topic I never would have thought of but makes complete sense! Thank you.

Ummm … this post is kind of genius! I looked at the post title and thought, snore. But the pictures sell it! I’m totally going to try this – thank!