Introducing: So Many Thoughts! 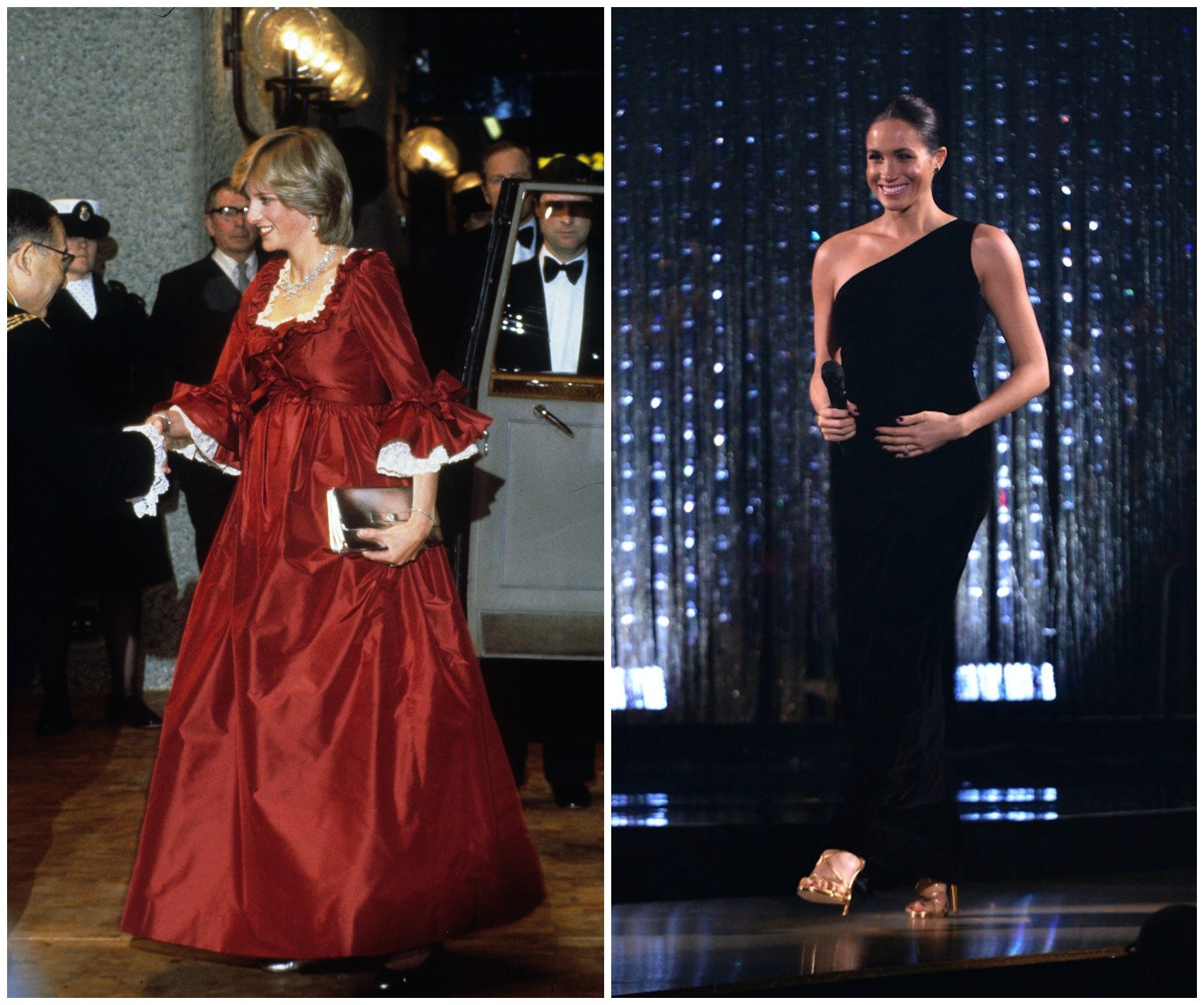 Do you follow So Many Thoughts on Instagram? In her stories, former Wall Street Journal reporter Elizabeth Holmes offers sartorial commentary on the royal family. She discusses not just their clothes, but also the messaging, branding and strategy behind their fashion choices. Her analysis is relevant and smart — and often laugh-out-loud hilarious. I’m excited to say that Elizabeth is doing a new column on Cup of Jo! Today, here’s her take on Meghan’s and Diana’s maternity style…

Meghan, the Duchess of Sussex (née Meghan Markle) made a surprise appearance at the British Fashion Awards this week. She stunned the crowd in a sleek one-shoulder Givenchy dress to present the Womenswear Designer of the Year award to Clare Waight Keller. (Royal watchers will remember that the British-born head of the famed Parisian fashion house designed the duchess’s wedding gown and stunning 16-foot veil.) It was the first time the world got a clear view of Meghan’s prominent baby bump, and in a glamorous black tie setting no less! It made me wonder what maternity fashion looked like back when Diana, Princess of Wales, carried her two sons and down the rabbithole I went. We dug up this vintage shot of Di from 1982, attending a formal event with the Queen, when she was roughly the same amount pregnant with William as Meghan is with Baby Sussex. So many thoughts!

And as we launch her ‘So Many Thoughts’ column, here’s a Q&A with Elizabeth Holmes…

First off, what’s SMT in a nutshell?

So Many Thoughts is my sartorial commentary series on the royal family. I annotate pictures on Instagram Stories of the Duchess of Sussex (aka Meghan Markle) and the Duchess of Cambridge (aka Kate Middleton), as well as the occasional other royal who crosses my radar. SMT offers what I hope is insightful and entertaining analysis of the royal family’s appearances — literally, as in what they are wearing, but also what they are trying to accomplish with their photo opps. I started it last December, on a whim while I was nursing my second son, and it has grown ever since.

And who are you?

Hi, I’m Elizabeth! I’m a longtime journalist who spent more than a decade on staff at the Wall Street Journal, most recently as a senior style reporter and columnist. I am now a freelance writer and work with a host of publications: The New York Times, Business of Fashion, Real Simple, Town & Country, Elle, etc. I was born and raised outside of Chicago, but fell hard for New York early in my adult life. Last year, I moved with my husband to Bay Area. We have two young (wonderful!) boys, Fitzgerald and Oliver.

What’s so compelling to you about the way the royals dress and present themselves?

Anyone who watches The Crown knows the royal family is in a constant fight for relevancy. This next generation of royals marks a new chapter for the family, with a renewed global appeal. Most of the world will never have a chance to see the royals in person. And we don’t often hear from the royals (although Meghan is changing that!). But what everyone can see, every time they step out, is what they are wearing. Their clothes send a message, and their appearances are highly choreographed. Seemingly little things, like the order in which Will, Kate, Harry and Meghan pose for a photograph, is meant to send a message. That attention to detail makes this world especially ripe for dissection!

I’m curious: What’s an example of how something small sent a big message?

There are so many! During the most recent royal tour, Meghan championed local, sustainable brands, making the most of the power she has to give small labels on a moment on the worldwide stage. One example that stands out: her black Outland Denim skinny jeans. Outland is an Australian brand that trains and employs exploited women and, as a result of the publicity and interest, the brand said it would be hiring 15 to 30 new seamstresses. She could have chosen any black jeans, but how great that she chose Outland’s — just think of the lives she helped improve!

What was one of your favorite Kate moments?

Style-wise, Kate’s two recent appearances in a velvet bow have become such a *moment.* Most of what the royal family wears is high-end — and high-priced — meaning most people can never afford to have those pieces. Something as simple as a velvet ribbon is available to anyone! Trend-wise, it was right on the mark, having trickled down from the runways two seasons ago to more affordable retailers now (even Target had a few versions on shelves!). It’s also so easy (and affordable) to run to a craft store, pick up velvet ribbon and make your own. I think that’s why it resonated far and wide this holiday season.

What are things a regular person can take away from SMT?

It’s easy to just see a pretty dress or some fun shoes — but I think it’s so much more interesting to see how that fits into the overall royal strategy. When Kate rewears a piece (which she has been doing a lot lately) it’s a way to look frugal, of course. But it’s also a reminder of all she has accomplished. By wearing a royal blue Jenny Packham dress to visit the Imperial War Museum in London in November, she all but ensured women’s sites would resurface a picture of her in that same piece getting off the plane for the 2016 Canadian tour.

I hope SMT helps people understand the thought and the effort that goes into the royal family and their appearances. More than any celebrity or political figure, the royals use clothing to send a message, promote a cause and build their brand. And who doesn’t need a little break from the news cycle these days? Come analyze a tiara with me!

Thoughts? Thank you so much, Elizabeth!

P.S. Seven everyday clothes I swear by, and the #1 thing I’d tell Meghan Markle about pregnancy.

(Diana photo by Anwar Hussein/WireImage. Meghan photo by Jeff Spicer/BFC/Getty Images. And thank you to Harling for showing us the unadulterated joy of SMT:)

By Elizabeth Holmes
Style
So Many Thoughts!
January 18, 2019