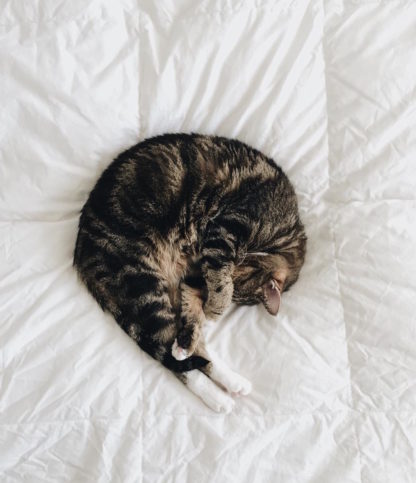 Last month, I attempted to become a morning person, and you’ll never guess what happened…

I BECAME A MORNING PERSON. Okay, so maybe you did guess that. But honestly, I never saw it coming.

Phase 1: Waking Up is Hard

The first few days of this challenge feel less than stellar. When waking at an early hour, my mind has but one thought: Airport? Historically, an early morning wakeup has corresponded with some type of travel. Regretfully, I inform my brain there is no vacation in sight.

With that, my body returns to slumber mode, leaving me to battle against the weight of my eyelids. “We’re waking up because it’s fun!” I tell my brain, out loud, because I’ve now resorted to talking to myself. My mind is still doubtful, but willing to go along with this charade.

The dog, on the other hand, is all too thrilled to adjust to life as a morning dog. After only a couple days’ worth of early alarms, she’s turned into a Disney animal. Before the alarm has even thought of chiming, she’s nudging me awake. It is both irritating and adorable.

“BARK!” she exclaims, at 4:45.
“Whaaaaaaaaat,” I grumble.
“BARK!” she argues, with so much gusto I fear the neighbors are now taking part in this challenge. The next thing I know, she is performing Riverdance on top of my blanketed body. And just like that, I am awake.

Phase 2: Waking Up is Fun

After a week, waking up feels easier for two big reasons. The first is I’ve been heading to bed earlier, out of necessity. I use the handy bedtime function on my iPhone to remind me to get in bed at the same time every night. (It starts harassing you an hour before your designated sleep time, so you can turn off the devices and get in the right state of mind.) I’ve found even when I climb into bed much earlier, my body is — to my surprise — actually ready to go to sleep. Apparently I’m not wired to be some nocturnal species, as I had once believed.

Because I find rituals fun, I’ve recruited a few nighttime helpers. This lavender eye pillow smells incredible and tricks me into believing my home is a spa and a random Tuesday is a vacation. You place it above your eyes, relishing in the comforting weight and soothing scent. At least half of its magic is that, when you have a pillow balancing on top of your eyes, you’re pretty much forced to relax. I’ve also become a devotee of magnesium, whether in the form of this drink or magnesium oil, applied topically.

The second reason I’ve been hopping out of bed in the morning is, much like those alarmingly chipper cartoon bluebirds I have spent my life despising, I now wake with the sun. For as long as I can remember, I counted my black-out curtains among my favorite things, turning my bedroom into a dark and glorious cave of slumber. However, my AC unit changed all that. I’ll spare you the technical details, but my window unit means the curtains cannot be closed during the summer months. And so, I find myself waking not with my alarm, but rather by the natural light pouring in through my window.

There is a third reason that waking feels easier, not related to sounds or sunlight: I’ve come to enjoy the morning. It turns out, the city that doesn’t sleep still likes to sleep in. Mornings are quiet(ish), populated by runners and dog walkers and people doing tai chi in the park. I no longer feel that my day begins in a blur, punctuated by my hairdryer and discarded outfits and rushing down sidewalks. I might take a stroll, or work on writing, or read a chapter of a novel before starting my day. I get why so many poets write about the morning. Sometimes, it’s actually golden.

But let’s be real for a second. This whole morning thing is working out, for now. Might I still hibernate in the winter months? Yes, I might. Might I slip back into my nocturnal ways at another point in my life? Of course. Will my clock inevitably get thrown off by a deadline or jet lag or a date involving too much wine? Yes and yes and yes.

When I first announced I would be undertaking this challenge, a lot of people responded to the tune of “I’M A NIGHT OWL AND I’M PROUD.” I hear you. And if that works well for your life, more power to you. I once read that Dave Eggers burns the midnight oil (or more accurately the 4 a.m. oil), because he can work only when he feels like he’s not missing out on anything. We all have to do what’s best for us.

For me, the big takeaway here was that different styles suit us at different phases of our lives. It can be refreshing to see the world from a new vantage point, even and especially if that vantage point corresponds to the sunlight. These summer mornings agree with me, but I don’t know what the next season brings. As with so many things in life, I am content to take it one day (or rather, one morning) at a time.

Did you try waking up earlier? If so, how did it go? I would love to hear…

P.S. More challenges, and the secret to a happy marriage.

Mornings really are magical. I have become one since moving most of my runs to the a.m. and during marathon season that means 5:30 wake-up calls most day.

Still, I have trouble winding down and sometimes get nighttime anxiety (Will a neighbor slam their door? Will the law student blast her music in the parking lot? Will the next-door dog bark?) I kinda get what Eggers means. I can’t sleep until, it would appear, the rest of the world sleeps so I find myself running on 5-6 hours a lot these days.

I’ve accepted that I will never be a morning person! It wasn’t meant to be. Supposedly, it’s not so healthy to fight your natural inclination as a night owl!

Late to the party, but I am a total morning person. It started because my apartment building’s laundry room gets incredibly crowded on weekends and in the nighttime, so I started waking up at 6:45 on weekends when it opens to be first in line. Then I found I liked being up early on the weekends – the neighborhood bagel shop is blissfully empty, the streets are quiet, my husband sleeps late so I can sip my coffee and do some writing with no one to interrupt me. Now I get up at 6AM during the week, too, to get my daily workouts in. It’s such a lovely time of day.

I’ve become more of a morning person. My toddler slept forever on weekends (we’d wake him at 9ish) but now that he’s potty trained, he’s up at 7. I do appreciate that weekends feel a bit lengthier when we use more waking hours of it! On weekdays I love getting one thing done at home, plus some me-time to view instagram stories, before heading to work. The mix of pleasure & productivity is key for me!

I am a morning person naturally. 05 to 07 are my favorite hours of the day. My beautiful baby robs me of them by tiring me with night wakings. Looking forward to future mornings.

For those asking about magnesium: check out the book “The Magnesium Miracle” by Carolyn Dean. It’s a mineral we’re all deficient in and can effect everything from sleep to anxiety/depression to hormonal issues, etc. I’ve noticed a huge difference since starting to take it regularly. Plus it helps keep you regular ;-)

I’ve always been somewhat of a morning person, but when I gave birth to my firstborn it took me to the next level. I remember him being a few weeks old, and I was up at 4:30AM one morning googling “what time does Starbucks open” and I knew my life had dramatically shifted!!!

Magnesium is AMAZING! I recommend it to everyone I know who is sleeping badly.