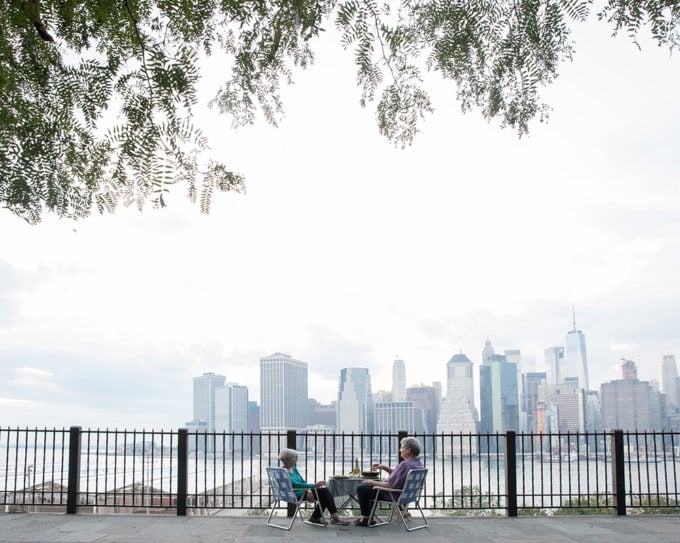 Just after sunset, I was walking along the Brooklyn Promenade, when I spotted a couple having a candlelit picnic. The two dined in blue lawn chairs pulled up to a fold-out ironing table. As I passed them, one had just finished a joke, and they kicked back their heads in laughter. Weeks later, I saw the pair in the same location — this time with the addition of a cheese board. That’s when I finally introduced myself to Jane and Terry and asked about their weekly picnic tradition.

When did this ritual begin?
Terry: We’ve been doing this for 24 years. It started when we moved to Brooklyn. We spent every sunset outside by the water.
Jane: Then, we thought, ‘Oh, let’s bring some wine down here.’
Terry: On the seventh night, as we headed out the door, our new neighbor sighed, “Are you guys still going to the promenade?”
Jane: We haven’t stopped since.

What do you usually pack?
Jane: Candles, because we’re here past dark. For food, we bring two good things, which is usually a big salad and steaks or lamb chops. And cheese tonight, of course.

Any favorite dinner conversations?
Jane: I remember being in my early twenties observing these older couples, wondering, ‘What do these people talk about? Don’t they run out of things to discuss?!’ I was so freaked out about this.
Terry: She told me that fear early on.
Jane: What I didn’t realize was that the longer you’re together, the more you have to talk about. You have more friends in common, more experiences. You have these stories about your lives, these stories about other people’s lives.

Has anyone joined your tradition?
Jane: Many times. One night, our friend Harold brought along these tiny little speakers. He went to all this trouble to play rock music during our dinner. It was hysterical.

How did you meet?
Terry: We met in graduate school at the University of Chicago. Three months later, I proposed marriage.

How did you know you were meant to be?
Terry: One night, Jane was feeling sick. I walked home through the snow to get my copy of Winnie the Pooh to read her to sleep.
Jane: He came back wearing these crazy pajamas. That won my heart.
Terry: The next day, I asked her to marry me.

What do you think is the key to a good marriage?
Terry: For us, it’s just connecting again at the end of the day, sitting down without distractions.

Have you ever called off a picnic?
Jane: It’s not that we don’t annoy each other. I wouldn’t help pack all of this if I were mad. But we’ve learned over the years how to talk things through.

Any advice for other couples?
Jane: The thing is, it’s just easier to be in a good mood. And be generous to one another, apologize often.
Terry: When we’re spending time together, our slogan is to have as much fun as possible.
Jane: Also, it’s important to remember that each partner is responsible for their own happiness. You can’t rely on the other one to always entertain you.

Thank you so much, Jane and Terry! You guys are a blast. Below, a few more photos of their ritual: 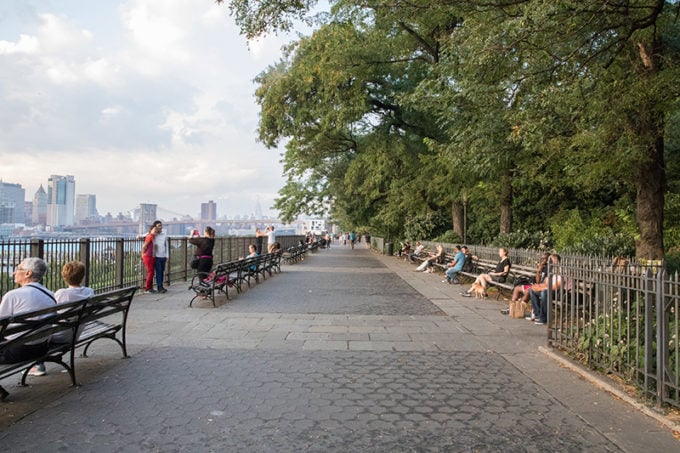 The Brooklyn Promenade is a walkway in Brooklyn Heights that looks over the East River toward the Manhattan skyline. Magical, right? Just wait until you add a sunset and Jane and Terry. 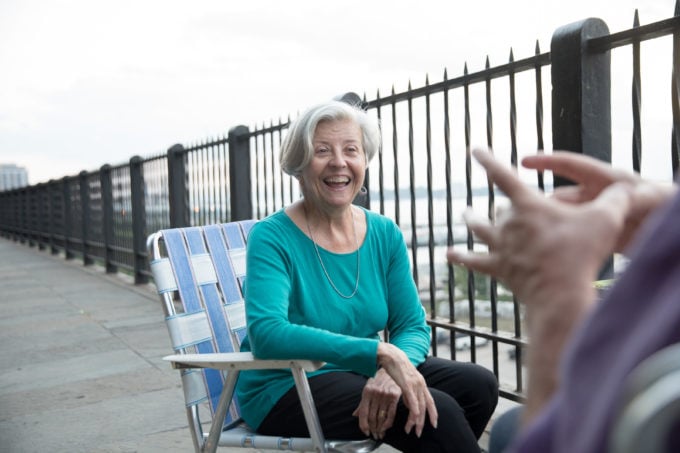 “This is our paradise,” Jane told me. 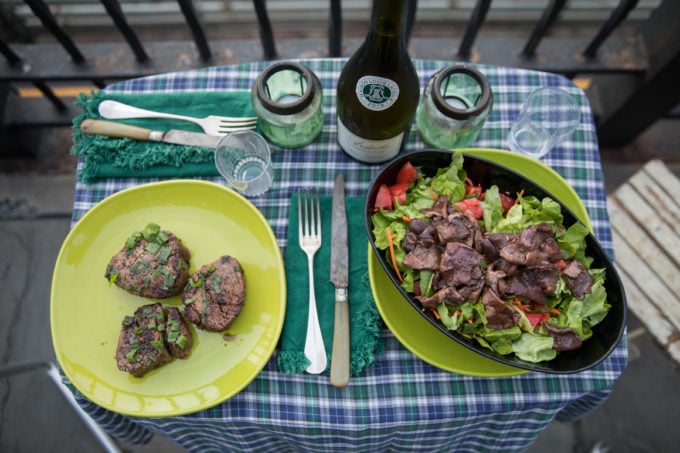 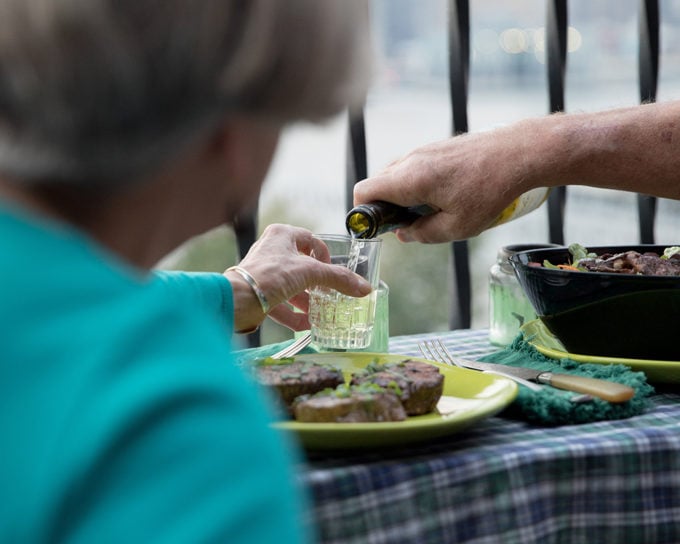 When Jane had an empty wine glass, Terry said, “Oh no, that’s terrible,” as he topped her off. 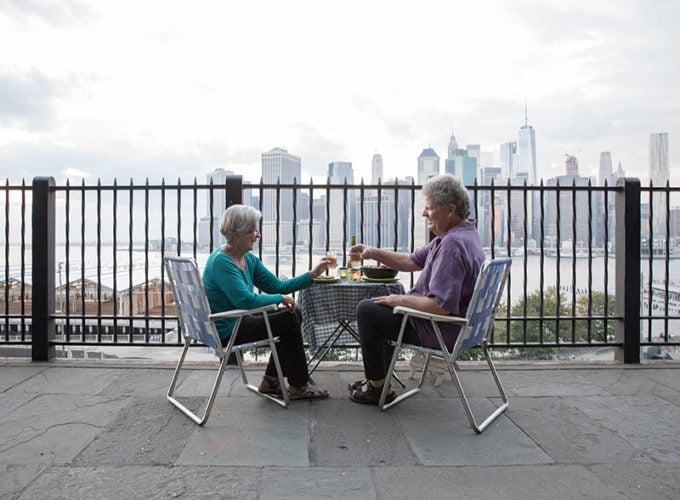 P.S. 12 relationship tips from a wedding reporter, and how do you know your partner is the one?

(Photos by Ana Gambuto for Cup of Jo.)

What do they do in the winter?
Curious:) I bet it’s another fun tradition. Or maybe they take a break to make summer more special?

My husband and I have been married 50+years. Ever since we met we have always had a great connection when talking to each other. On one of our first dates we went to a coffee shop and we just sat there talking till four thirty in the morning! Once we were out and a woman came up to us to ask how long we had been married at the time it was 35yrs she could not get over the fact that we still had so much to talk about! That’s how it has always been till this last year. My husband is ill and after taking care of him for the last 12yrz the doctor said no more he needed to go into a nursing home. That was hard enough to take but the worst thing that has happened is he has no idea who I am now At one point he thought I was just one of the nurses that Came over to visit. I was crushed. I no longer have my soul mate and I miss our talks most of all. Enjoy all the time you have together because you never know when your time will be up.

I’m sorry, Mary. Thank you for sharing your story. My husband and I have been married for 8 years. I hope our marriage will be as blessed and happy and long as yours. We’re currently in the trenches with three small kiddos. Reading this helps remind me to enjoy it.

Mary, my heart breaks for you. The fact that you’ve had a true and great love is so rare and so wonderful. But the pain of now, I’m so sorry for you. XO.

What a lovely story and a great couple. Isn’t this what we all want in a relationship. Thanks for sharing!

I love married life and love this tradition! I hope my husband and i can start a similar tradition.

Reading this has filled me with such joy. I am getting married in July this year and I hope we will create rituals of our own which we will continue to do in many years to come. More posts like this please!

Randomly got linked to this from some other post and love it even more now than I did when it was first posted. More like this, please! xo

Randomly got linked to this from some other post and love it even more now than I did when it was first posted. More like this, please! xoxo

My first ever visit to A cup of Jo and I loved it.