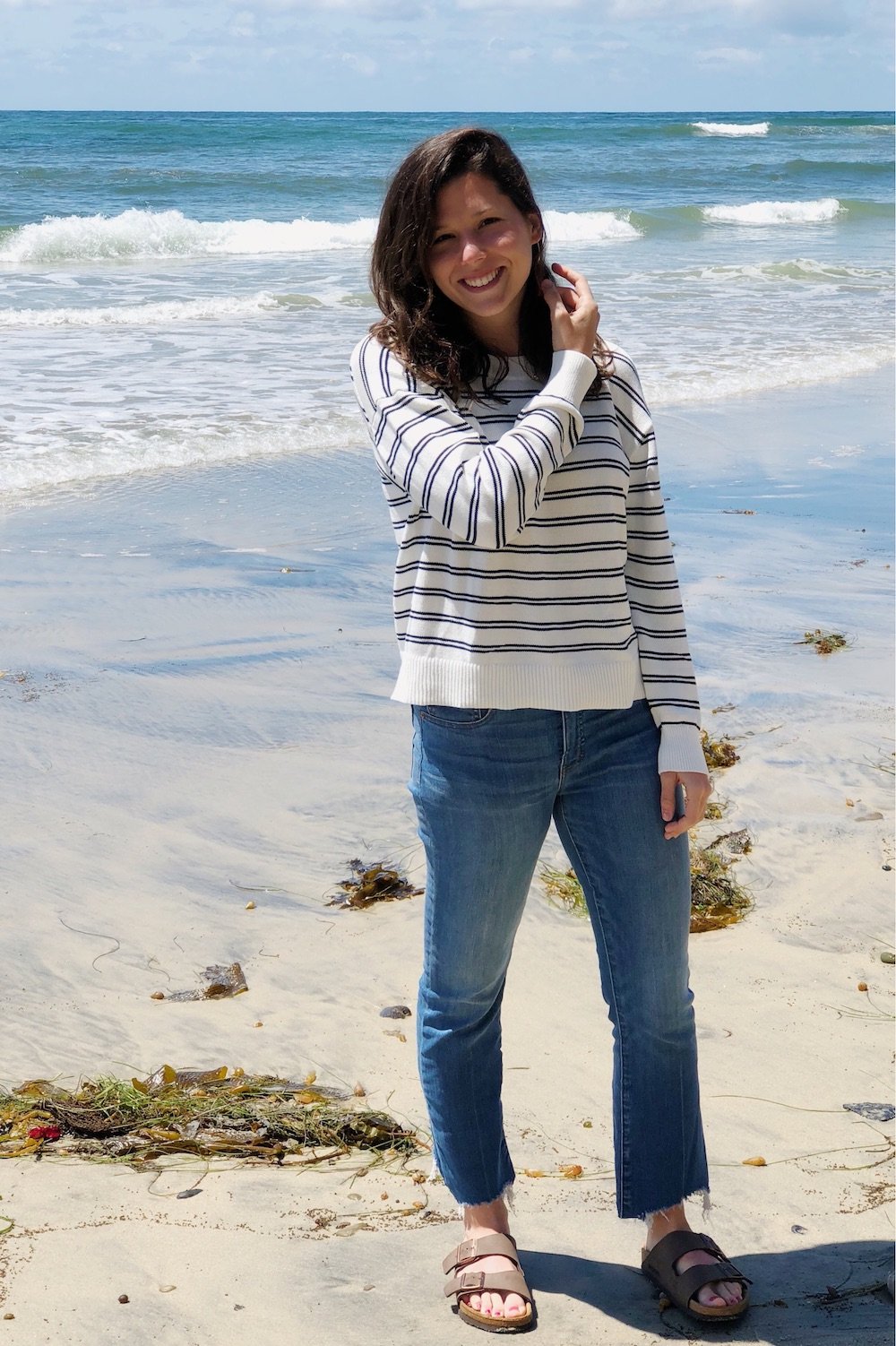 We’re thrilled to officially introduce Franny Eremin, the newest member of the Cup of Jo team. She’s smart, hilarious and you’re going to love her. As editorial assistant, Franny will be working with us on all kinds of things, including managing our food series, helping with social media and writing posts. She has already written about coming out at work and convinced us all to get signet rings. Here are some fun facts about her, plus a few other site announcements…

Her backstory:
Franny grew up in Cornwall-on-Hudson, New York, a small village in the Hudson Valley. After graduating from Smith College in 2016, she moved to New York City to pursue a career in publishing. She worked at Penguin Random House for two years before joining Cup of Jo this April. Franny lives in Brooklyn with her best friend from college.

Favorite book:
It’s a tie, between Tell the Wolves I’m Home and A Little Life. I’m a huge fan of intense, literary fiction and both of these fit the bill. I read A Little Life last summer and haven’t found a book that I’ve enjoyed as much since. Recommendations are welcome!

A random pet peeve:
When a toilet paper roll runs out, and instead of replacing it, the next person just leaves a new roll on top. C’mon, man.

Favorite trip:
Last year, my girlfriend Kerry and I took a trip to Big Sur. We were looking to escape the East Coast winter, but it ended up raining the ENTIRE time, so much so that most roads along the Pacific Coast highway were closed. It was a blast, though. We stayed in a cozy Airbnb, went to a local yoga studio every day and played round after round of Rummikub.

What you make for dinner when you’re home alone:
PB&J on the softest country white bread.

Three New York recommendations:
Take a nap in a hammock on Governor’s Island, eat at Frankie’s Spuntino (get the cavatelli!), and hunt down a Mister Softee truck for a twist cone with rainbow sprinkles.

Personal fun fact:
I’ve chipped my front tooth four times, once on a stale bagel of all things, so now I cut up anything that needs to be bitten into directly, like an apple or cheeseburger.

The #1 thing on your summer wish list:
I’m looking for a new suitcase! I haven’t had a functional rolling suitcase for years. I’m saving up for one like this.

Irrational fear:
Birds. That is all. 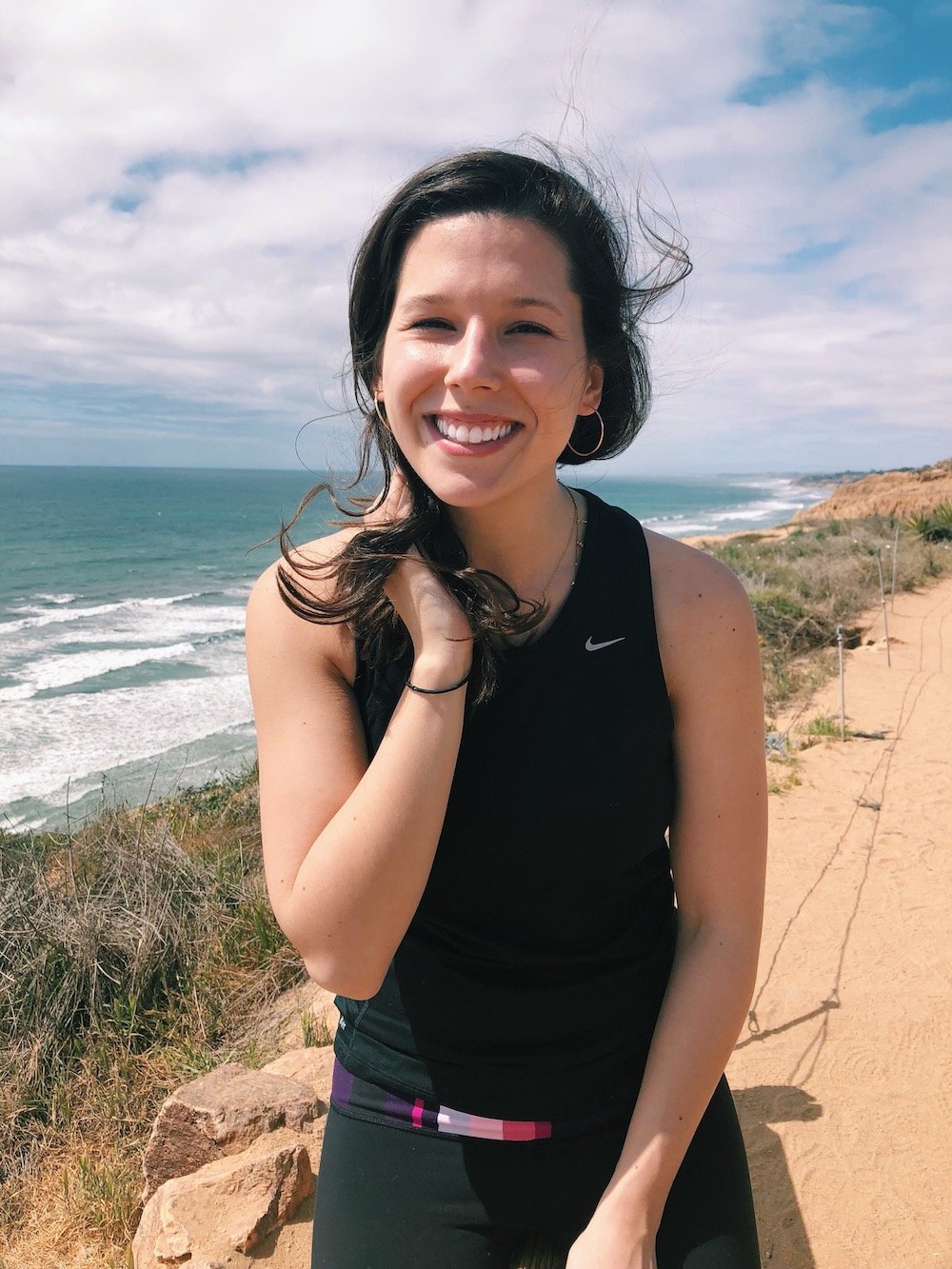 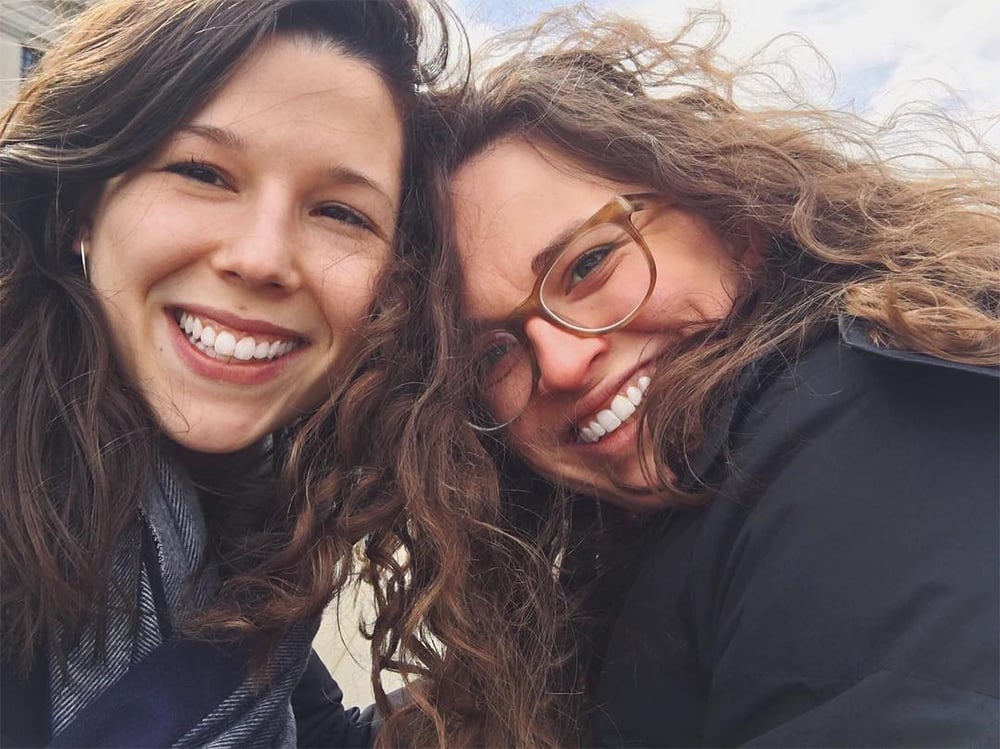 Franny with her girlfriend, Kerry. 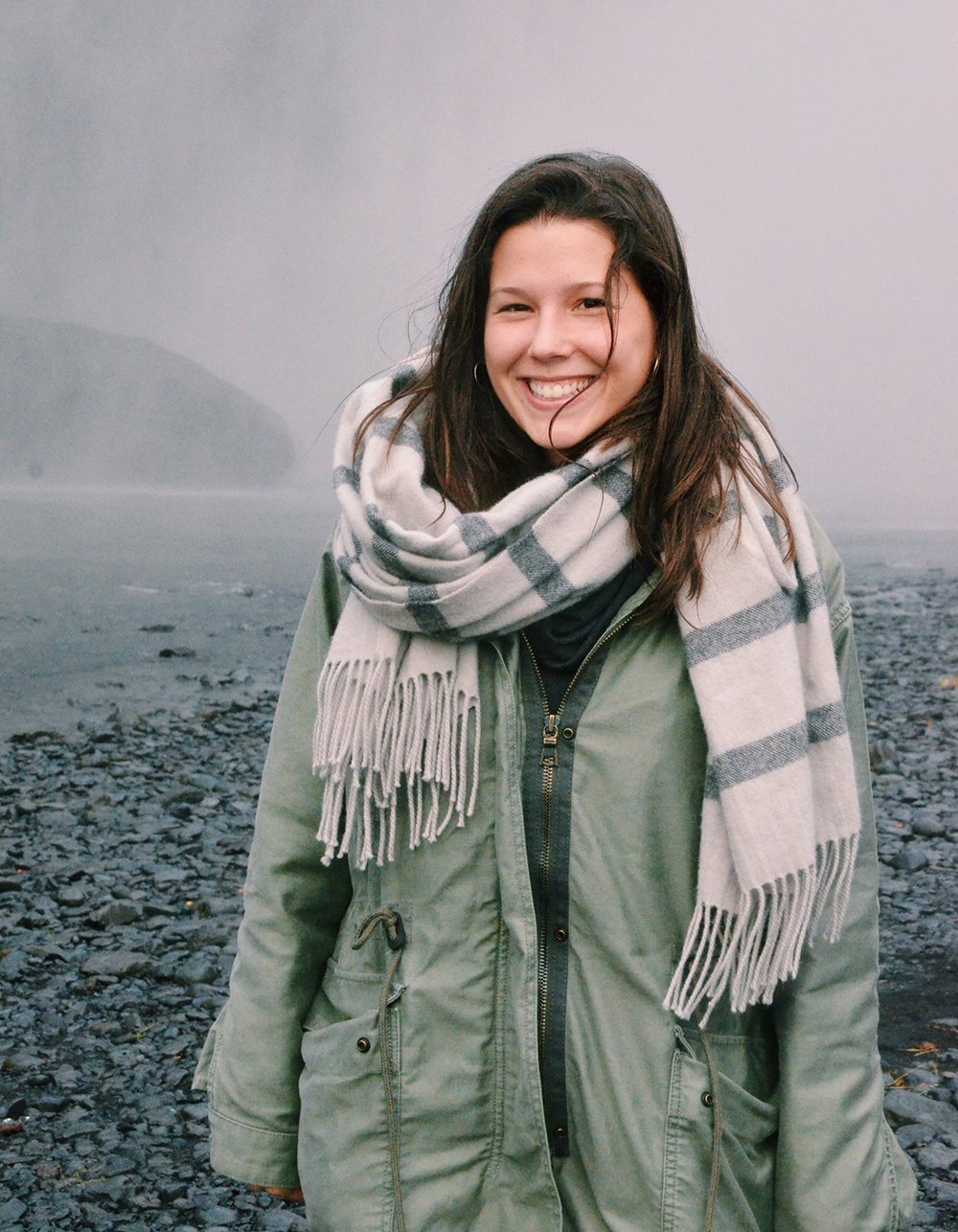 Plus, a few more Cup of Jo updates:

We’re thrilled to introduce a few more awesome voices, including a new finance columnist, Paco de Leon and wellness columnist, Erica Chidi Cohen. Paco founded The Hell Yeah Group, a financial firm focused on inspiring creatives to be engaged with their finances, and is eager to tackle everyone’s pressing questions about all things money. Erica is a doula, educator and co-founder of LOOM, and her words on everything from bodies to pregnancy feel like a giant pep talk from your best friend.

As far as our long-term team, Ashley Ford, whom we adored in all ways, had come on last November to be a contributing writer, but shortly afterward got an amazing book deal and has to focus on that. (Bravo, Ashley, we love you!) And yes, the widely beloved Caroline is officially back as our features editor! We have a few other exciting things in the works, so please stay tuned.

Thank you, as always, for reading. We feel lucky every day to have this special community. xoxo

Is Franny not at CoJ anymore?

thank you for your note! franny had to leave Cup of Jo, but we wish her all the best!

Welcome Franny! I’m in the process of lucking for an Airbnb in Big Sur (or close) so I’d love to know your recommendation!

I picked up”Tell the Wolves I’m Home”’after reading this and it’s just what I needed. I feel like these are dark times and I needed to read something besides the heinous things coming out of Washington. And this was exactly the sort of beautiful, moving, tragic, human sort of story I needed. Thank you. Franny can make book recommendations any time!

I’m excited for Paco and Erica too! I’d love if one of Erica’s first posts was about questions to ask/things to look for when selecting a doula!

PB&J on the softest country white bread…woman after my own heart! I eat the exact same thing when I’m eating dinner alone at home

I’m afraid and have an irrational fear of birds too!

Ugh not another glowing review of A Little Life. Blurgh. But seriously- how exciting to have a growing team and flourishing blog. :)

Reply
B
Reply to  Nicole

hear hear. I kept waiting to stop being beaten about the head with that book, and that time never came. The only reason I finished it was because I read it in the wee hours of the night while breastfeeding my first. I believe my judgment was impaired, and I still hated the last 4/5 of it.

Franny and Kerry both have the most astoundingly even teeth and happy happy smiles. Bravo, girls! Dental care is important.

That funny I thought the same! ??

Welcome Welcome to everyone. Love the updates. Excited to see how everything rolls out.

Two of my favorite books, too! I’m gonna like her.

Okay I adore your three simple recommendations from a New Yorker. To show my appreciation, I’d like to give my three recommendation for Los Angeles as a native:

1) find a street with rows of palm tree and lay in the grass staring up at them.
2) go get a drink (or a bite if you don’t drink) at Musso and frank’s to feel a bit of old Hollywood
3) Friday night jazz (it’s free) at Lacma

Welcome Franny! I’m so excited that Cup of Jo has now added a SMITHIE voice to the mix!

Welcome Franny & YES to A Little Life. I read this book probably two years ago and nothing has moved me the same way since.

I too have a fear of birds! You must be AWESOME!!! Welcome.

Awesome, awesome team!! Excited to hear about all the new members :) Best wishes to Ashely on her book!

Funny – I read Tell the Wolves I’m Home a few years ago and don’t remember it making a big impression, but re-downloaded it onto my Kindle after reading this post and am now devouring it. It is so moving.

A hearty second/third/fourth for Americanah. I shed a few tears upon finishing, knowing I would never again read it for the first time (my comment above about Tell the Wolves notwithstanding, ha).

I’m also planning a trip to Big Sur in a few months, but accommodations seem … challenging, to say the least. If you don’t mind sharing, would you let me know more about the cozy Airbnb that you loved? :)

Hi Alicia! Thank you so much :)

I just checked Airbnb and it seems like the hostess took the house off, but there are a bunch of other places that look great. We stayed in Carmel-by-the-Sea: https://www.airbnb.com/s/Carmel-by-the-Sea–CA–United-States/homes

Have the best time! xx

Just when I think I couldn’t possibly love COJ and the team any more, a doula comes on staff!!!! Heart eyes forever. Can we do nothing but talk birth babies mamas every Thursday?? Yes??

Hi Frannie! I love your outfit in that first pic ❤️ welcome, so wonderful to hear all about you. That pic in Iceland, enjoying nature/freezing, yep! This is how I have fun/suffer too.

Best of luck Ashley! I’ve been missing your voice here, so glad to hear you are doing well ? I hope you’ll be back when you have the chance.

Yay Caroline is back for real!!!

Thank you, Lauren! Can’t wait to watch it!

So happy to see a fellow Cornwallian (CCHS ’07) working for one of my favorite websites. What a fantastic opportunity – can’t wait to see what you write next!

Missing Ashley’s voice already! Hope she comes back when she finishes her book like Caroline :)

Welcome! I too loved A Little Life. I would HIGHLY recommend The Heart’s Invisible Furies by John Boyne it’s a MUST READ and it will leave you in a daze and pull out your heartstrings and gah so much love for that book.

The Great Believers by Rebecca Makkai! She is friends with the author of Tell The Wolves I’m Home.

Bringing this on vacation next week!!! So excited to read it.

Yea! I love A Little Life and Tell the Wolves… I’ll have to add The Great Believers to my list!