On Coming Out at Work 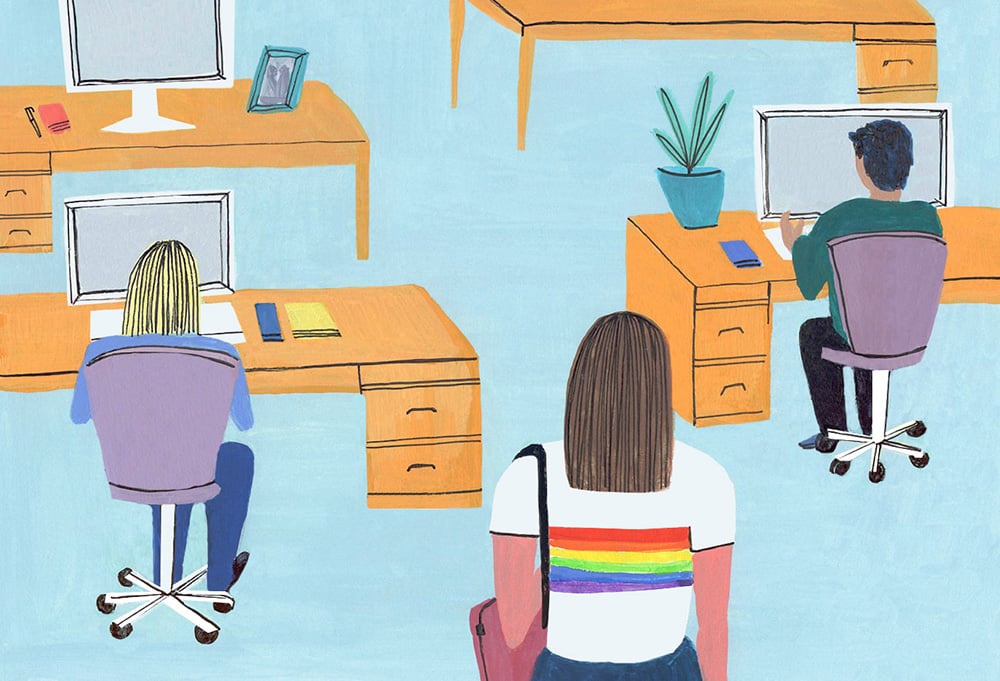 After moving to New York City and starting a new job, my Google search history included ‘cheapest happy hours,’ ‘dress codes at publishing houses’ and one other burning question I dared to ask the internet…

According to WikiHow and a slew of online forums, inquiring LGBTQ readers need not worry. “Be strong!” they encouraged with generic stock pictures. “Have a script!” they suggested, along with well-meaning but vague ideas for opening lines and back-pocket monologues. “Find your allies!” But HOW? These articles boiled coming out down to a task akin to tying my shoes, but it still loomed daunting to do so at my new corporate job.

My only experience being out was from going to college in Northampton, Massachusetts, also known as “Lesbianville,” according to The National Enquirer. (Seriously, though, this is the crosswalk.) There, my girlfriend Kerry and I could walk through town and run into couples just like us. I worked at a preschool where half of the children in my class had same-sex parents. Life as a lesbian didn’t just feel normal there — it felt celebrated.

In my new office, with windowless cubes and fluorescent overhead lights, I found it harder to open up to my new colleagues. Small talk consisted almost exclusively of book talk and weekend plans, and to my fresh-out-of-school, 22-year-old self, the fine line between sharing and oversharing proved murky at best. So, when my new coworkers happily asked basic get-to-know-you questions during team lunches, I panicked. Our icebreaker chats went something like this:

Friendly coworker #1: Do you have a boyfriend?
Me: No. (Not technically lying here.)

Friendly coworker #2: Are you dating anyone?
Me: No. (Kerry and I were way past dating! We were solidly TOGETHER. Right?)

Most people take one look at my long hair and floral dresses and assume I’m straight. On one hand, that’s a privilege; I get to choose when and how I come out. If Kerry and I travel to a new place, be it a different country or neighborhood restaurant, we can first walk around as “friends,” read the environment and then decide if it’s safe to hold hands. At the same time, though, I can fall prey to people’s assumptions, which can lead to some awkward and hurtful comments.

“Really? You don’t look gay,” someone once said.

“Who’s the ‘man’ in the relationship?”

“Is your girlfriend pretty? Or is she butch?”

“Are you sure it’s not just a phase?”

The dread of having to potentially validate my identity to people rendered me silent for the first five months of my job. Even though no one gave me a specific reason to feel unsafe or judged — I was working in a progressive industry in New York City, after all – I couldn’t be sure that things would stay the same once I came out. Would women think I was flirting with them if I gave them compliments? What if I were suddenly the only person not being asked to grab coffee? I didn’t want to make others feel uncomfortable. I really just wanted to be liked.

Still, I yearned to tell someone about Kerry; how we met at a workshop and I told her I liked her pen (don’t ask me for flirting advice), her fierce devotion to teaching first grade, her spot-on Cookie Monster impression and how much I missed her in these new stages of our long-distance relationship. I was, and still am, so proud to be her partner, and every failed opportunity to mention her filled me with guilt. Withholding Kerry from my coworkers made our relationship seem shameful. When I’m with Kerry, I feel like my best self; my whole self. I wanted everyone to see that version of me, too.

So, I followed the one piece of advice that resonated from my initial internet research: “Take a breath.” There was no need to send a department-wide email or gather everyone around for a suspenseful moment of truth. I could start small and take my time. It’s easy to forget that everyone has parts of themselves that are harder to share than others. If I listened to other people and let them into my world, people would do the same for me.

I wish I could say that my coming out moment was a raucous, monumental event, but really, it was on a crowded, swelteringly hot subway with one coworker. I didn’t feel strong or have a script. She asked me if I had a boyfriend, and I replied, “I have a girlfriend.”

That was it. Four words. Two seconds. I could breathe again.

Have you ever struggled with sharing more vulnerable parts of yourself at work? If so, how did you? Sending love and courage to those who may need it.