15 Surprising Things About Parenting in the Philippines 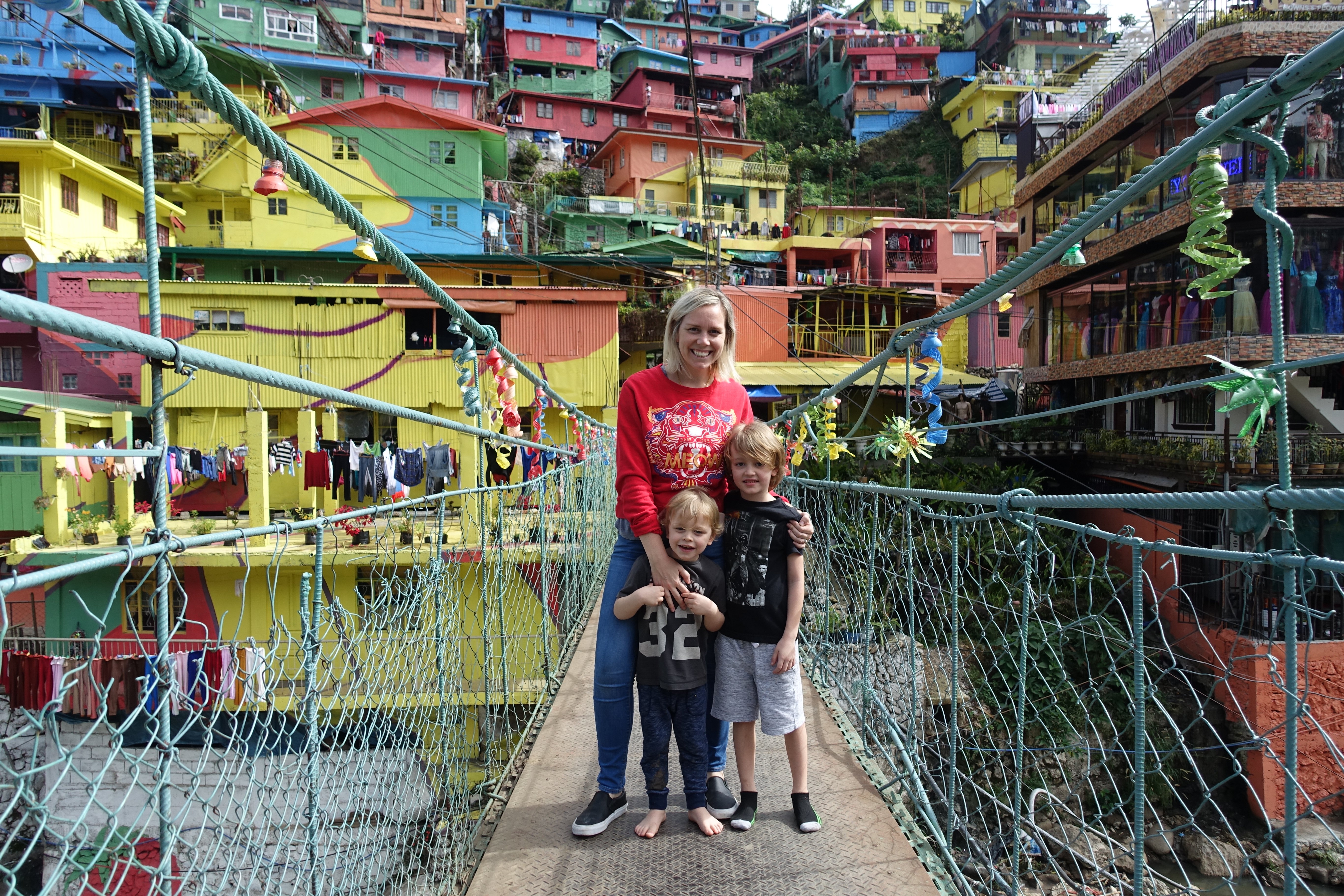 For our next Motherhood Around the World interview, we talked to Amber Folkman, who lives in the Philippines with her husband, Jake, and their three boys. “I grew up in a small Northern California town,” she says. “But we really enjoy big city life in Manila.” Here, she talks about “malling” with her kids, karaoke parties and elaborate end-of-school performances… 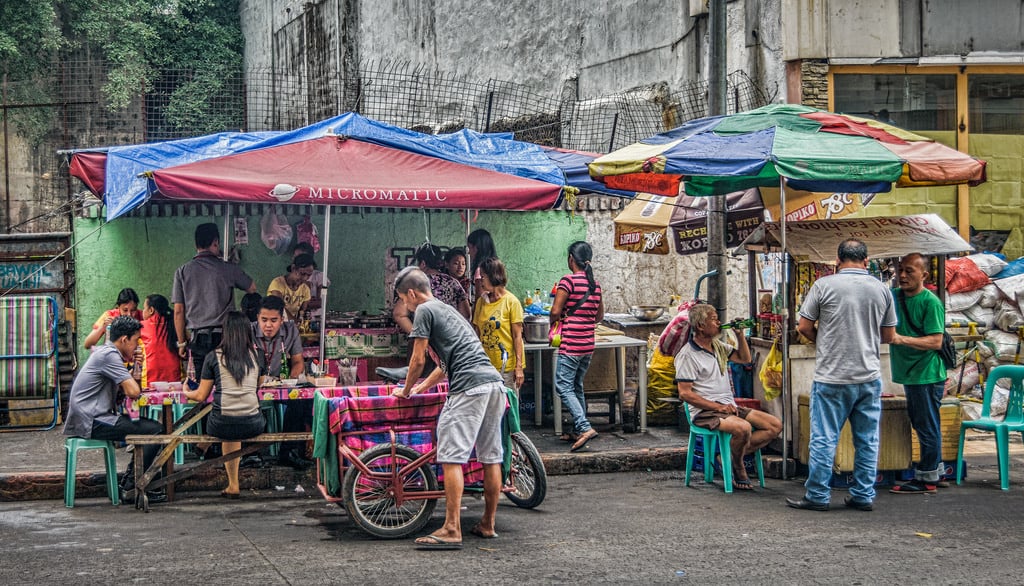 On first impressions: We moved to Manila eight years ago for my husband’s job at a tech company. Our first morning, everything felt new and bustling. We ate breakfast at a traditional Filipino restaurant where the bacon was so fresh there were a few pig hairs visible. We also tried tablea tsokolate, which is Filipino hot chocolate. It has a thicker texture and is not as sweet as the American version. To this day, it’s one of my favorite local drinks. 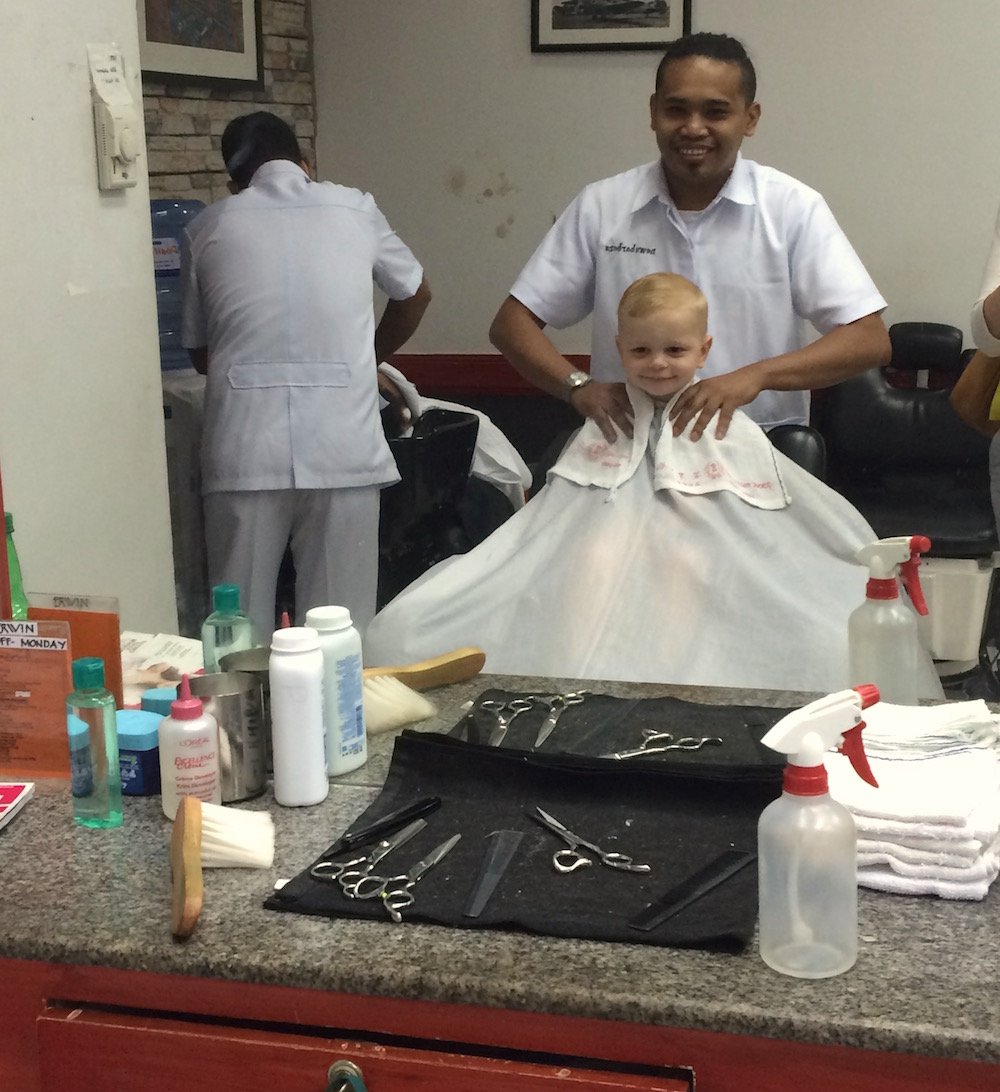 On friendliness: In general, the people we meet in Manila are warm and child-friendly. That’s one of the greatest perks of living here. When we go to restaurants, the waiters pick up my sons. Strangers give them high fives as we stroll by. And adults are very open to making friends. One day, I saw a craft workshop posted on Instagram, and I decided to give it a go. The women in the class immediately started inviting me to playdates, family BBQs and birthday parties, and I began hosting them, too. Children here, including my boys, refer to adults as kuya (big brother) or ate (big sister), and it’s so endearing.

On politics: For the past year, since President Rodrigo Duterte took office, this country has been involved in a deadly campaign against drugs. It has strained and divided people here. Many Filipinos support the president’s approach, but the people I know who oppose him are staunchly opposed; I have not met anyone who’s sitting on the fence. My husband and I are here on a work visa, which mandates that we not engage in local politics. We can’t vote or participate in political demonstrations. Still, we devour the news. I ask my local friends about their opinions, listen and learn. Recently we received a notice from our community association reminding us that if the Philippine National Police ever asked to search our home for drugs we should immediately comply. We haven’t been personally affected by Duterte’s drug war, but I know friends of friends who have lost loved ones. 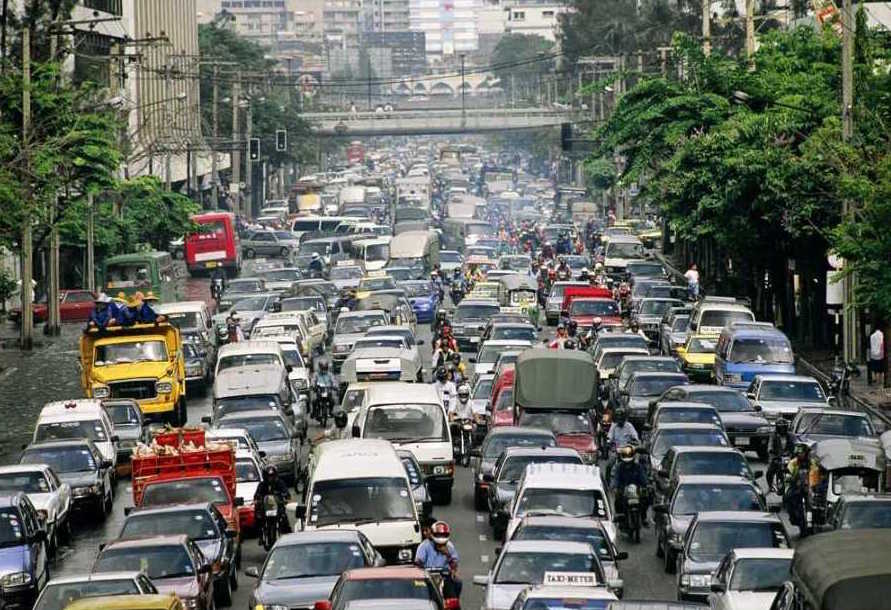 On traffic: A recent poll showed that Manila has some of the worst traffic in the world. It’s also one of the safest cities to drive in — the roads are so crowded that cars often doesn’t move faster than 12 miles per hour! Just tonight, it took me two hours to travel three miles. Because traffic is notoriously bad, vendors on the roads sell water, energy drinks, soda and peanuts. I also keep snacks, toys, diapers and changes of clothes for traffic emergencies. My kids have definitely peed in empty water bottles. I plan many of our activities based on holidays when I know traffic will be light, and we don’t get in our car after 4 p.m., if we can help it. The government designated a system which prohibits every car from being on the roads one day each week, which means we can’t drive on Tuesdays. We do a lot of walking when we can. 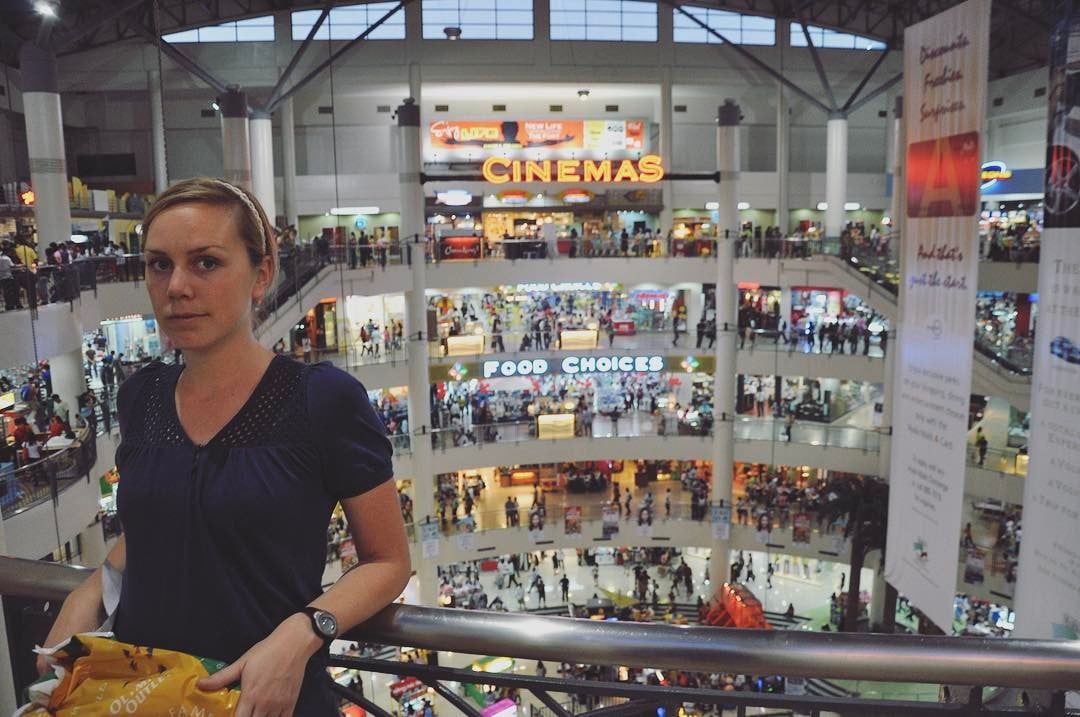 On malls: Manila is a city of shopping malls. People even use ‘malling’ as a verb. (‘What did you do this weekend?’ ‘We went malling.’) Almost everything is located within the mall: grocery stores, movie theaters, banks, salons, hardware stores and pharmacies. I’ve done Zumba and yoga at the mall; I’ve held a sewing workshop in a mall; our dentist is in a mall. I could probably list 20 malls in a 10-mile radius off the top of my head! At first I tried to avoid them, but now I’ve embraced it. Every Friday, we go to the one by our house for dinner. The kids get to pick where we eat, which usually means the pizza place or a Japanese restaurant where you grill your own meat on a sizzling plate — they go crazy for it. This week, my middle son, Oz, had a cavity, so we visited the dentist. Oz and his siblings watched a movie while his tooth was fixed. After, there was a Lego event, so we played with legos for an hour. As you can tell, we’ve gotten into malls! 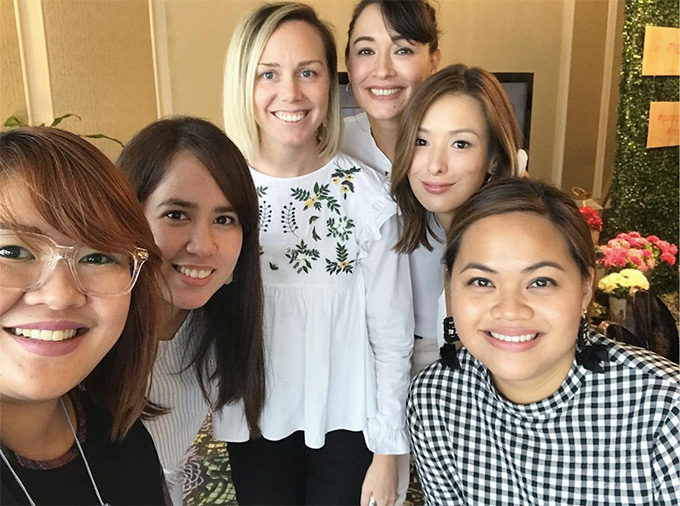 On social media: Social media is huge here. When we got home from the mall that night, our dentist posted an Instagram photo of my kids, and I saw that she had more than 50,000 followers! All businesses have Instagram and Facebook accounts. People of all ages are on social media, from seven-year-olds to grandmas. Selfie sticks are also huge. Time Magazine recently named the Philippines the selfie capital of the world. My kids aren’t on social media yet, but I’ve been surprised by how big of a role it has played in my life as a mom. My social media accounts have allowed me to immerse myself in local culture, from understanding Filipino humor to making real-life friends. My oldest actually helps me translate my Instagram captions into Tagalog, the main language spoken here. 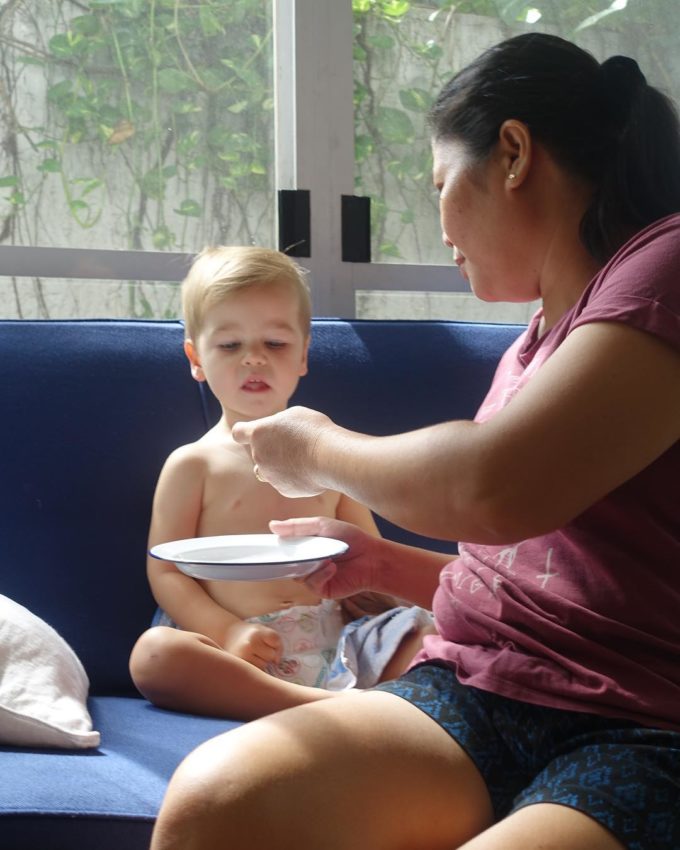 On yayas: Nannies, or yayas, are very common in Manila, and not just for the most affluent families. Some yayas even have their own yayas, usually a relative or a long-time friend to whom they pay a portion of their own salary. We are lucky enough to have Chanda, who helps with cooking, cleaning and watching the kids. Her salary, which equals around $350 per month, including health insurance and meals at work, is higher than average. Some families have live-in helpers, but Chanda lives in her own home. To be honest, it took about a year for me to get used to sharing household and parenting duties with Chanda. I used to think the only time I should be away from my kids was when I was at work. But it’s wonderful to be able to leave my kids in Chanda’s care for regular dates with my husband, individual time with each son, and to write, exercise and volunteer. She teaches us Tagalog and everything about Filipino culture. We love her so much; my kids know her better than they know their grandparents. We will eventually have to say goodbye, but I turn this part of my brain off because I can’t imagine our family without her. 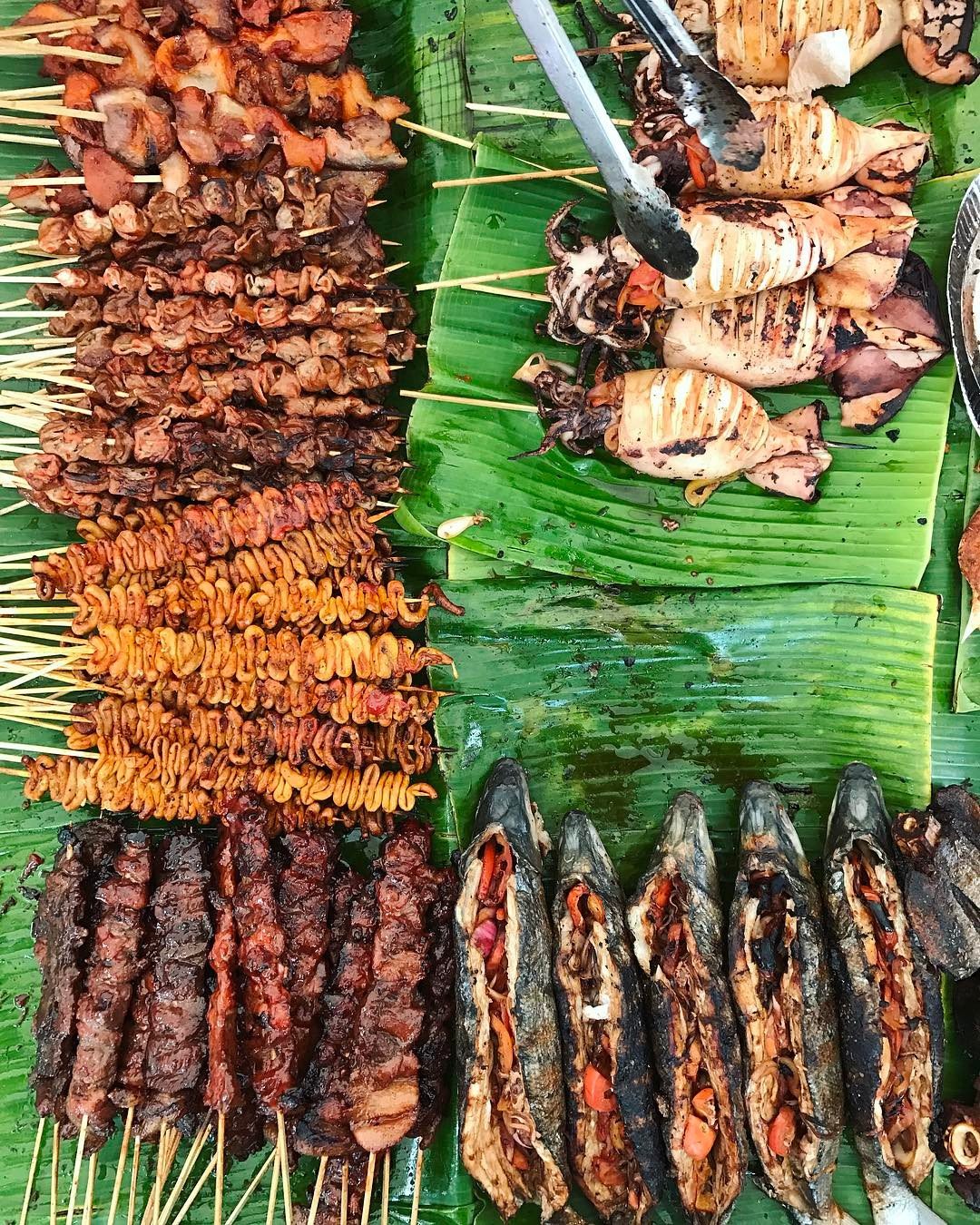 On food: In the Philippines, people take care to use all the cuts of meat: face, head, belly, thighs, bones and skin. At first it was intimidating, but now we eat almost everything. I’ve learned to not inflict my cultural norms on my children, especially when it comes to food. My younger two love chicken intestine. Chanda brings her own lunch, and now Oz likes to eat fish and rice for lunch every day, like she does. She fries it to a crisp, and then he pulls the fish off the bone, packs it into the rice with his hands and eats it like she does without a knife and fork. All my kids eat with their hands now.

On rice: My older son Aaker isn’t into rice like his younger brothers. In school, where he is one of a handful of foreigners and the sole American, he is the only one who brings a sandwich for lunch. At our parent conference, the teachers told me they were worried about Aaker. I got nervous, then they said, ‘We’re concerned that Aaker doesn’t eat rice.’ It was a legitimate concern of theirs, but I was relieved when they said that was it. ‘Rice is life’ is a common phrase here, and it really is. 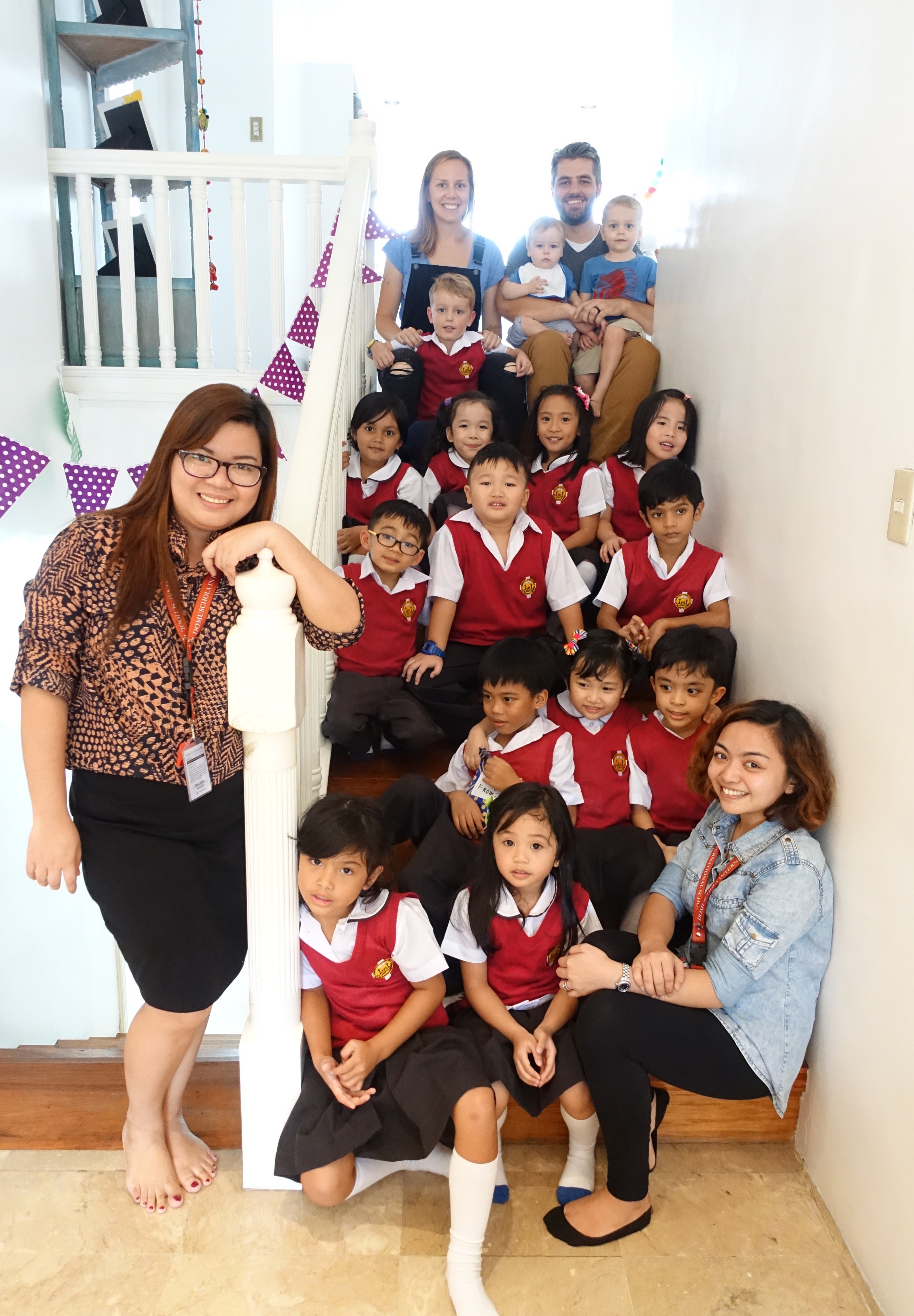 On school performances: At the end of the school year, all the children put on a song-and-dance performance for their teachers and parents. It’s a huge deal; our school rents out a theater for days. When Aaker was five, they did an intense black-light dance to One Direction, where they spelled out words with their hands. This year, the theme was Trolls, and they all wrote songs about being happy. My son isn’t a natural performer, but this has taught him to feel more comfortable on stage. He might have been shy up there, but he did it and said he had so much fun. I got teary-eyed watching him. 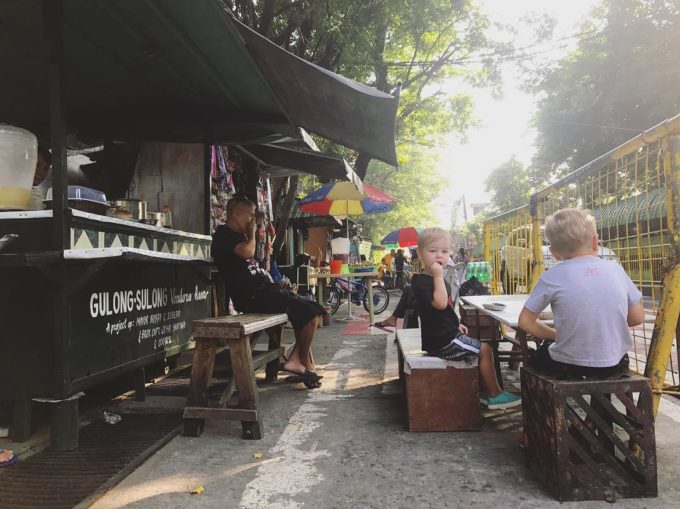 On personal hygiene: Our family has learned from the local emphasis on good personal hygiene. Many people brush their teeth in public restrooms after lunch — my sons have toothbrushes at school and brush along with their classmates. Kids often drape a little towel over the back of their collars during playtime or when they’re outside, so they can wipe away sweat. My kids have asked for them, so now I always carry a sweat towel with us. Most Filipino bathrooms have a tabo, which is a water-filled bucket that you can use instead of toilet paper. At first I thought it wasn’t for me, but when it saved us after my toddler had an accident at a public pool, our family has embraced it! 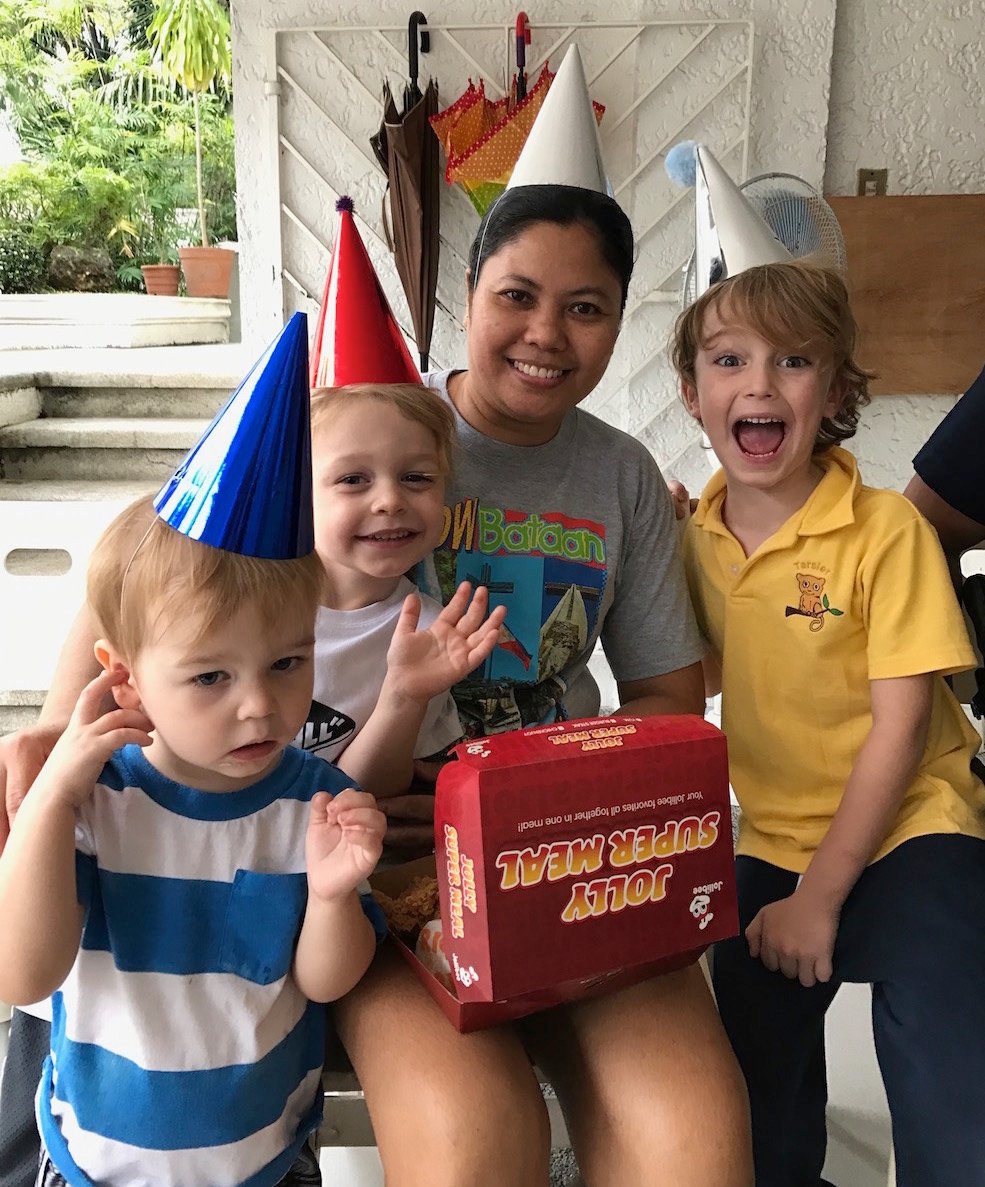 On parties: The birthday parties we’ve been to here have been big, even when families don’t have huge budgets. They are family friendly, and everyone gets invited. First birthday parties are the biggest — they can have a host, a theme, a DJ, an event stylist and a magician. We just got invited to a farm-themed one six months in advance. A popular game is ‘Bring Me,’ where the host will say ‘Bring me a… [fill in the blank],’ like a cellphone or comb, and the first three kids to bring them up win prizes. Another one involves all the kids putting a dollop of Vaseline on their noses, sticking a cotton ball on it and shaking until it comes off. Oz loves that one. 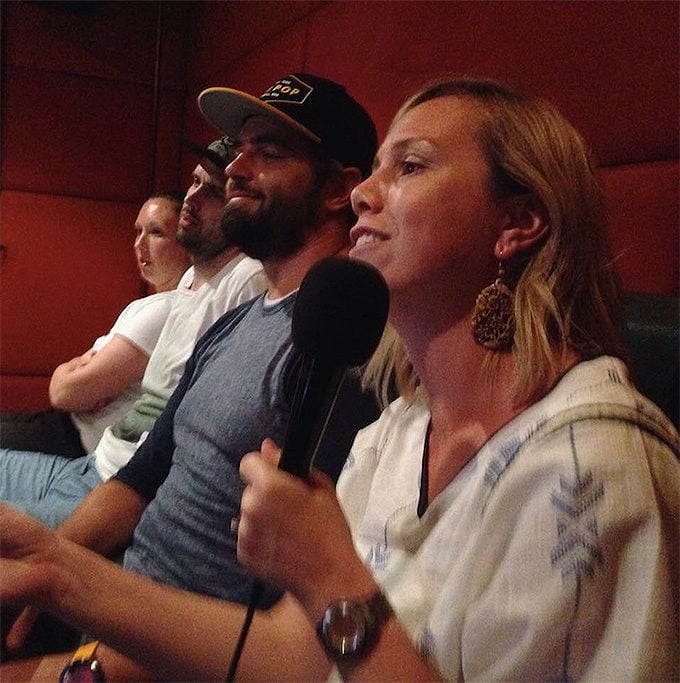 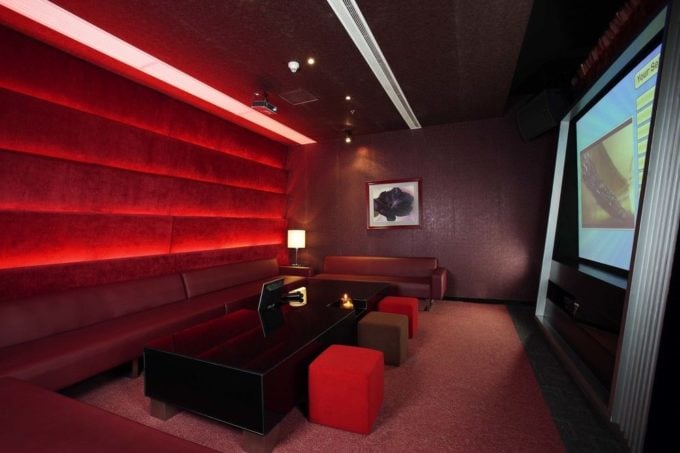 On karaoke: Karaoke is also huge here! Almost every department store sells karaoke machines, and you can’t walk through a mall without hearing a sales clerk blurting out a ’90s love ballad. The Cranberries’ ‘Zombie’ is hugely popular. When we move and I remember the Philippines, I will think of that song. Manila has lots of karaoke bars with room rentals for around $20 a night, which includes a round of drinks. We recently rented a karaoke Jeepney for a big group of friends. The Jeepney drove us all over Manila while we belted out Shakira and Britney into the late hours of the night. It was one of those surreal ‘only in the Philippines’ experiences. 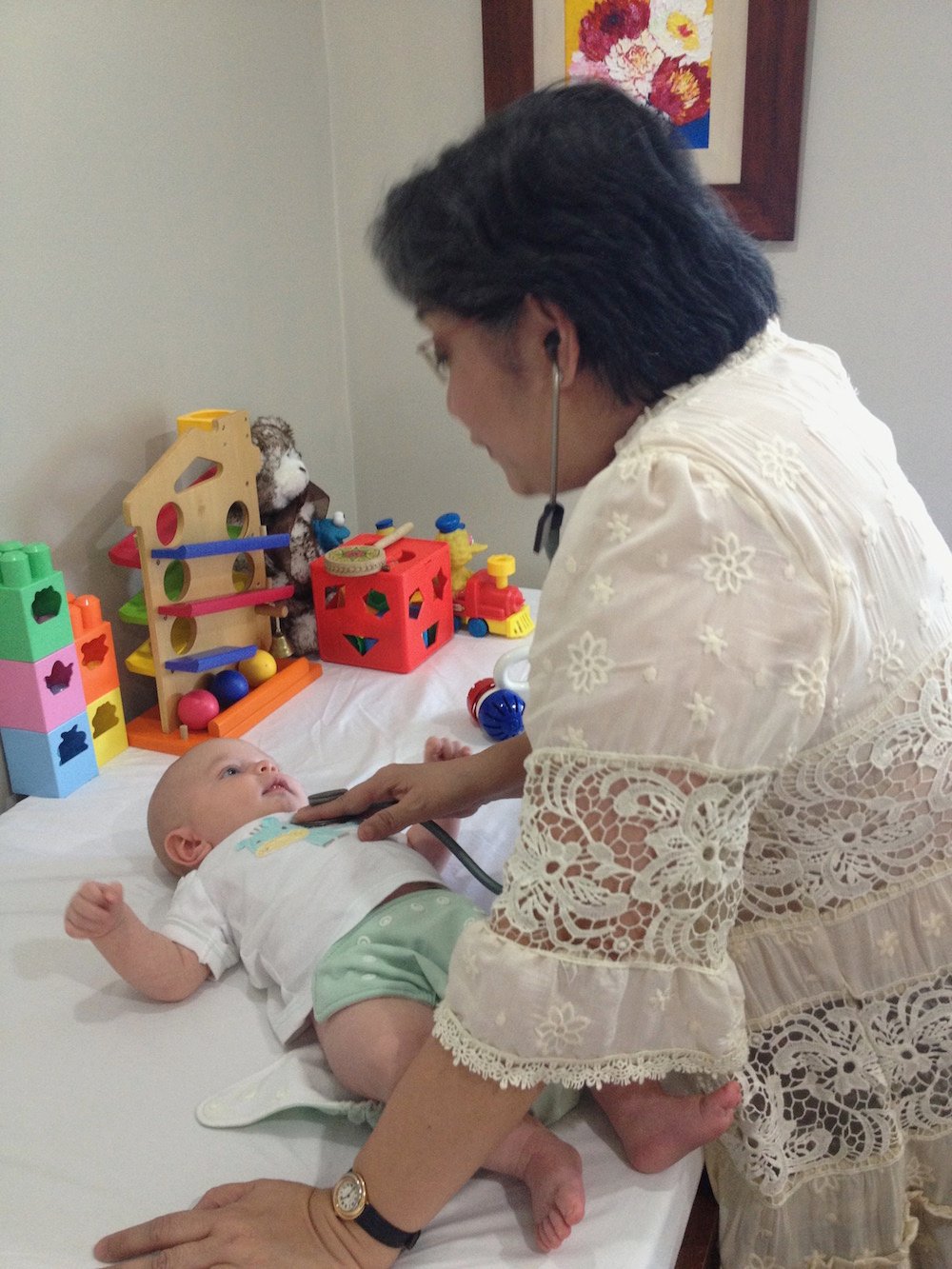 On women in the workforce: Women are big in the workforce here — it’s one of the aspects I love the most about Filipino culture. The country has had a female president, and many women hold high positions within companies or are health professionals. Our dentist, eye doctor, pediatrician, pulmonologist and ob-gyn are all female. Many women are the the breadwinners of their extended families, and it’s also not uncommon for women to move abroad to work as they can provide a higher income which will ensure a good education for their children back home. 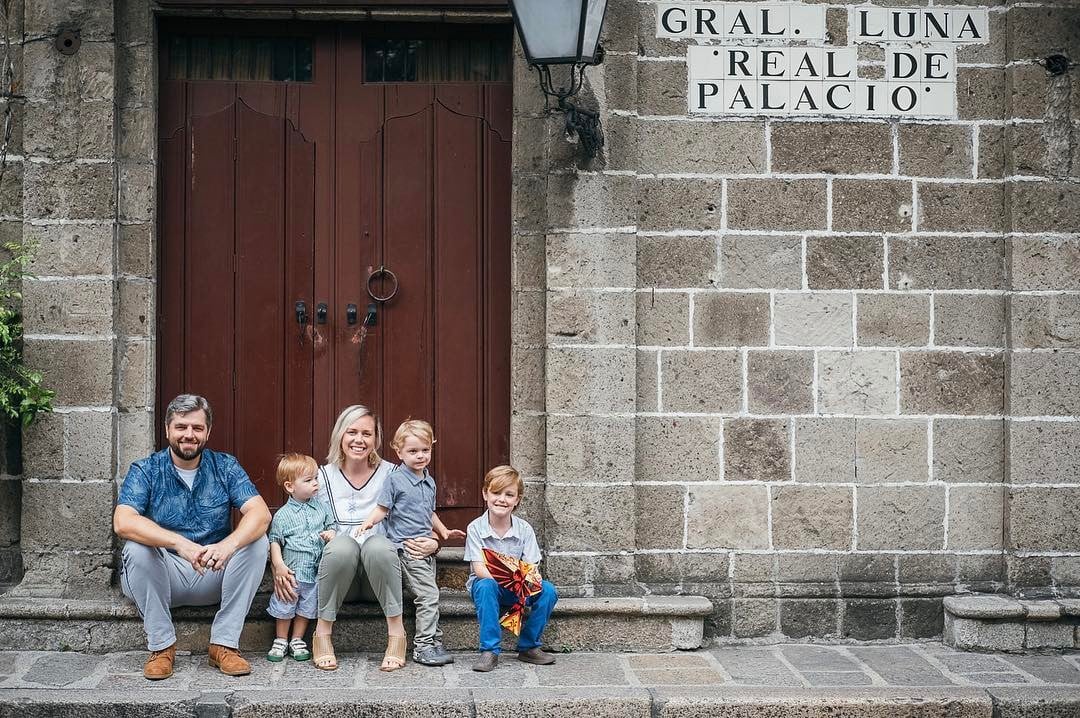 On settling in: The first time my kids saw a water fountain in the U.S., they had no idea how it worked. Bathroom hand dryers spook them, and string cheese blows their minds! Although I do miss the States at times, I hope our family lives here for another eight years, or until our kids need to go back for some reason. I want to show my children that the world is so much bigger than one culture, and living abroad is an amazing way to do that.

Thank you so much, Amber!

P.S. Our full Motherhood Around the World series, including Iceland, Turkey and Japan.