10 Surprising Things About Parenting in Japan 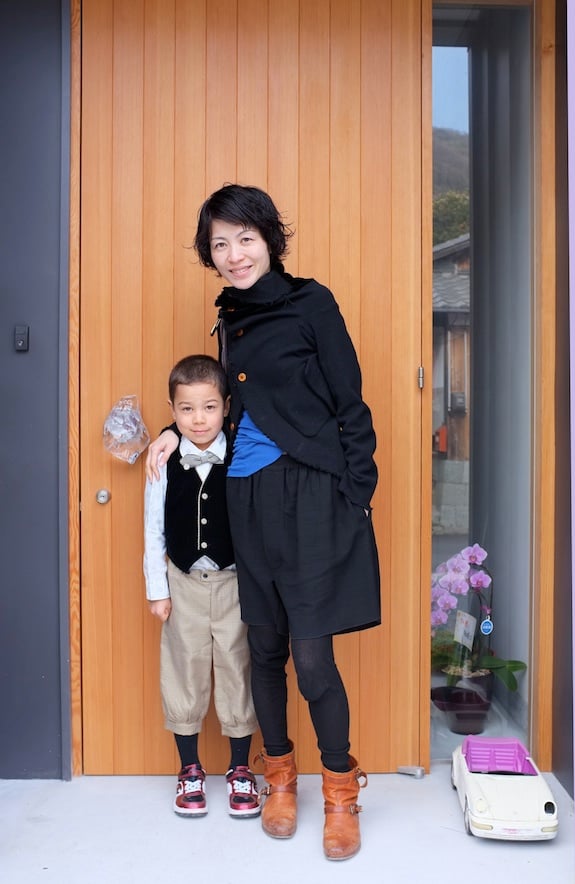 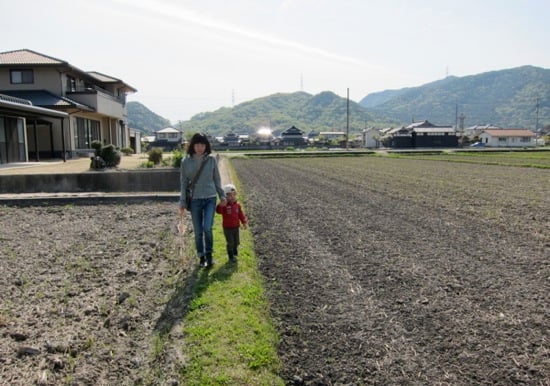 For our Motherhood Around the World series, our second interview features photographer Yoko Inoue, who moved from Brooklyn to the Japanese countryside with her husband and son. Here are 10 things that have surprised her about being a mom in Japan…

Photographer Yoko Inoue grew up in the suburbs of Japan and moved to New York when she was 21. “I always felt like I was born in the wrong country,” she says. “In Japan, there’s a lot of pressure to fit in. But I always wanted to be different. In New York, I felt at home. You have to be different. Everyone is trying to stand out.”

But in 2010, after seventeen years in New York, her American husband suggested they move to Japan for a few years with their young son Motoki, and Yoko agreed. “New York gets tiring. When we went home to visit my parents in the countryside, we always had a great time. I wanted my son to be able to speak Japanese and learn Japanese culture.” So, they moved to a rural neighborhood, close to both mountains and a river, which is about 15 minutes from the medium-sized city of Okayama.

When they first moved back, she was in heaven: “The food is good; the people are so nice; the pace is slow. I thought, this is amazing!” Having lived in Japan now for over three years, she’s started to experience some of the challenges, as well. “It’s very different to be a mom here — in some hard ways,” she says. “There’s so much pressure to fit in, versus being an individual. But, on the flip side, the close community provides so much safety. Motoki can go outside and play and I don’t have to watch him. He trusts people, whereas in New York he had to learn from an early age to doubt. Here, everyone is family, and everyone is aware of him.” 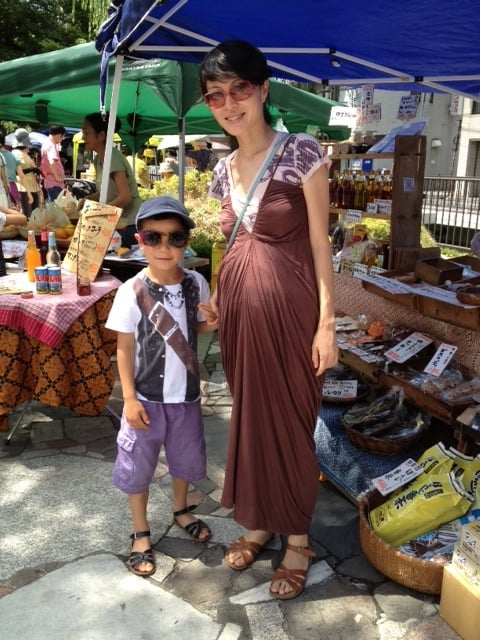 On pregnancy: I’m six and a half months pregnant right now and have been going to a Japanese doctor. In New York, when I was pregnant with Motoki, my doctor warned me, ‘You can’t eat sushi, coffee, alcohol or raw cheese.’ She gave me special vitamins. My Japanese doctor says nothing about any of that! No diet restrictions at all. I did pick up a flyer at the doctor’s office that said I can drink a few cups of coffee a day and a glass of alcohol. 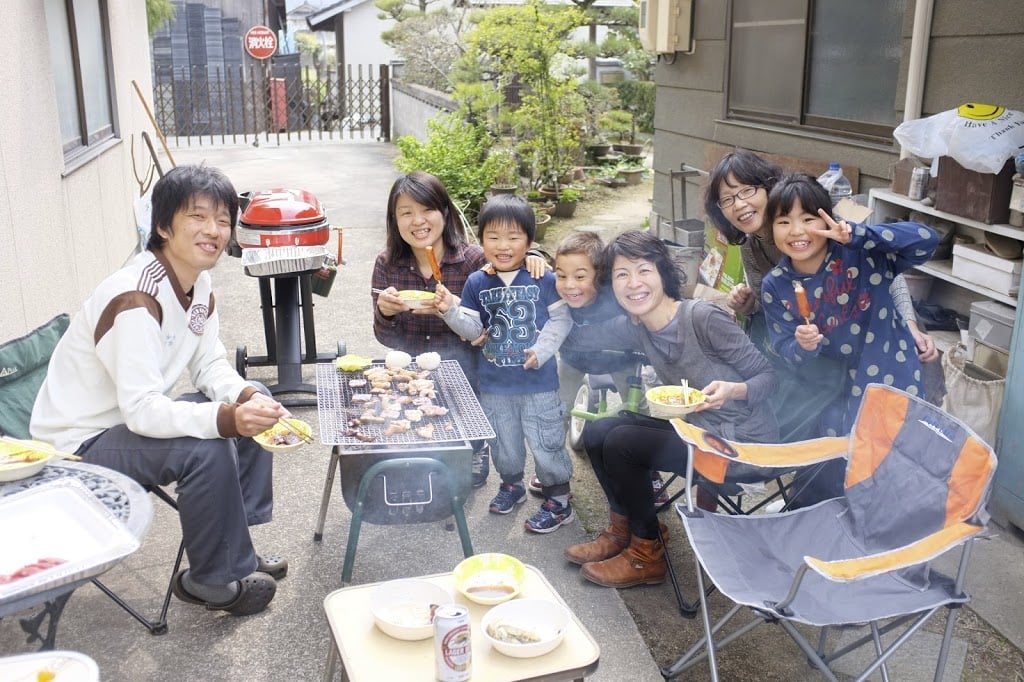 On making friends: Most of the moms I’ve met here are full-time homemakers. In New York, most mothers I knew worked. I still work full-time as a photographer, so I find it’s hard to relate to the moms here sometimes…it’s hard to make a friend.

It has taken me a few years to learn that Japanese moms communicate differently than Brooklyn moms. In Brooklyn, you would meet a mom on the playground and tell her everything that’s going on in your house — problems with your husband or kids. You could be very open. It made me feel like, ‘I’m not alone — everyone is going through similar things.’ Here, if I am open, I get strange looks. It’s easy to feel like you are the only one having problems. But really, everyone is going through similar things — they just don’t share it in the same way. People draw a line between public and private.

On parties: When we go to a get-together with other families, men and women are totally separate. The women are usually in the kitchen cooking food and watching the kids, and the men are in another room drinking beer. I don’t understand this… I want to be sitting and drinking! In Brooklyn, we were always mixed, mothers and fathers. Moms don’t seem to make friends with other fathers here.

On date night: Date night is not a thing here. I once told some friends I had hired a babysitter to go out to dinner with my husband, and they were shocked. Restaurants are very expensive, and men tend to work very late — even on weekends — so it’s very rare to eat out…maybe just once a year. On your birthday. Sometimes I feel like once a Japanese woman marries, she just becomes ‘mother’ — not woman or wife. She and her husband lead separate lives. She eats early, with the children, and he eats late, often with his business associates. Couples still seem happy and friendly with each other, but it’s a man’s world inside of marriage. Men don’t help with housework. 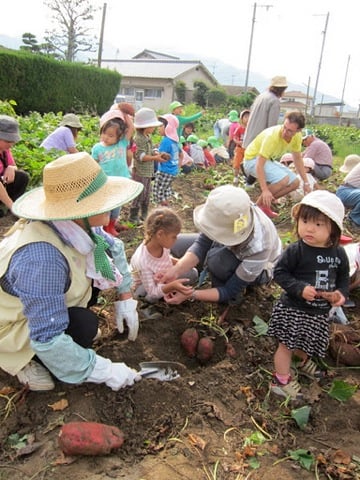 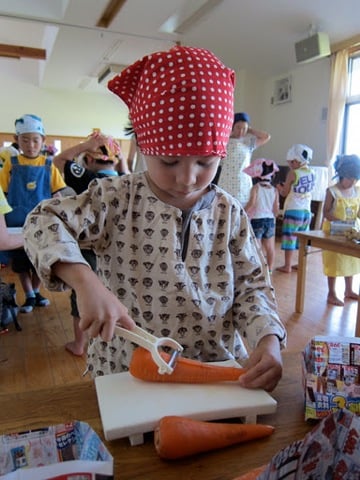 On nursery school: There are two kinds of nursery school in Japan: one for kids whose moms work, and one for kids whose moms stay home. The one for working moms runs six days a week, from 7 a.m. until 6 p.m., and your child can’t go unless you prove you have a job or can’t take care of them for some reason. I sent my son to the ‘working mom’ school, and it was wonderful. It’s supported by the government, so it only costs about $150 per month (including a balanced lunch prepared by a chef in their own school kitchen). It’s mostly about being outside, touching bugs, building in the sand. The philosophy is ‘learn by playing.’ The other school goes just until lunch and it’s more academic and structured. 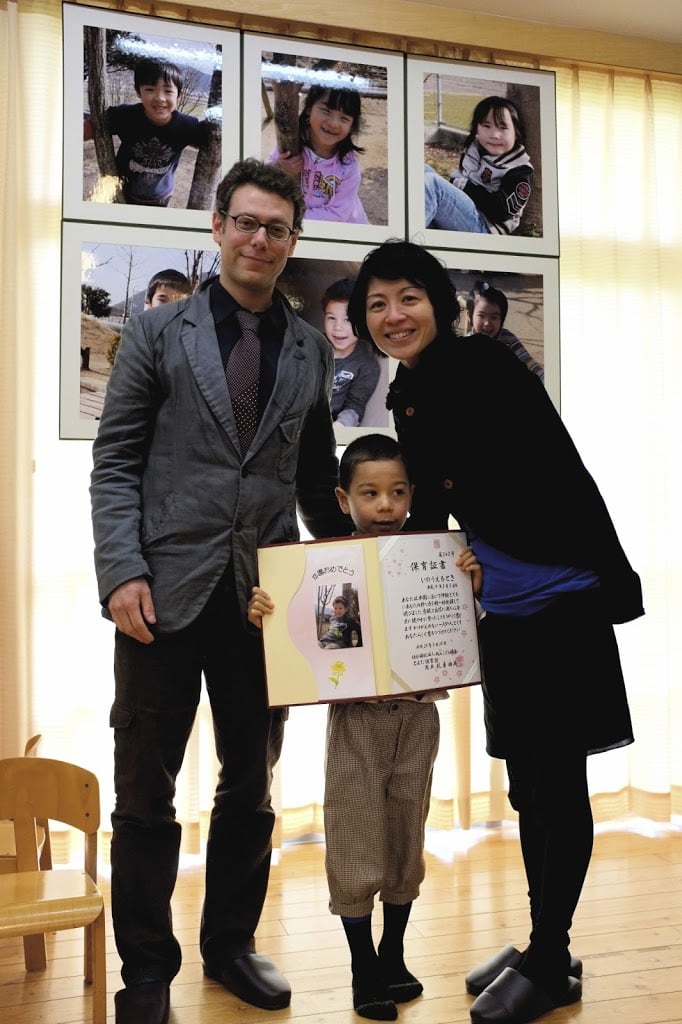 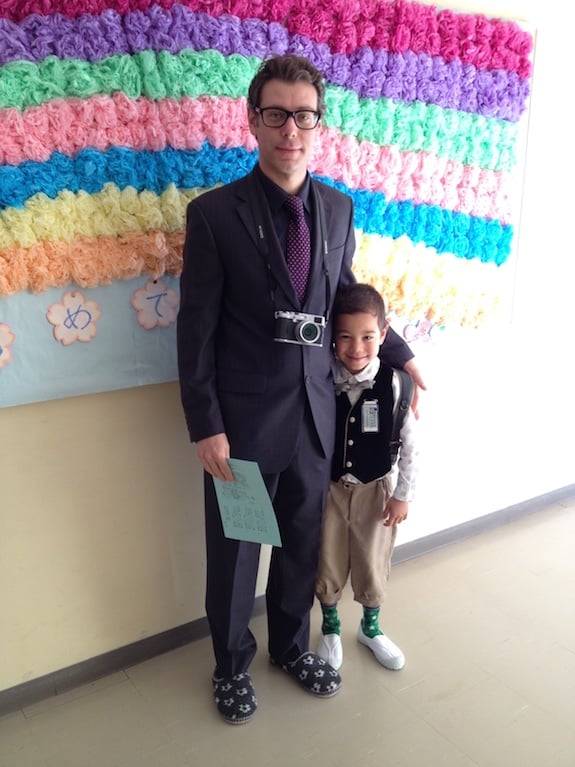 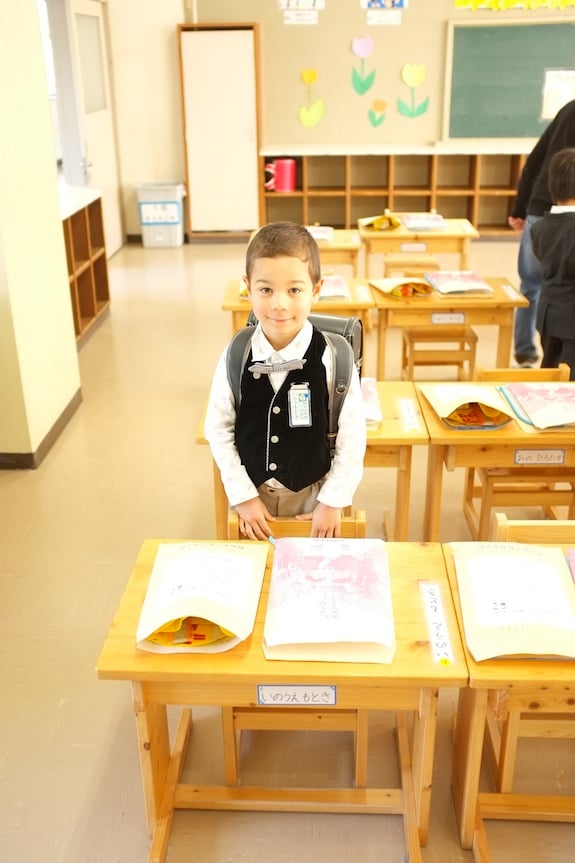 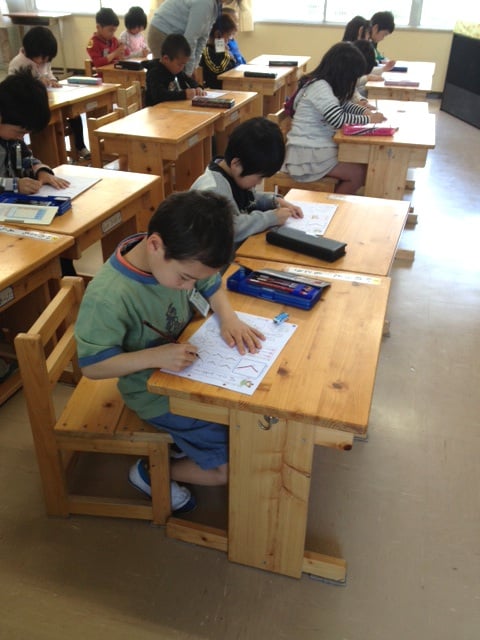 On kindergarten: Motoki just ended his ‘preschool’ and started the Japanese version of kindergarten. Here are photos of his preschool graduation and his ‘opening ceremony’ for kindergarten. The year changes over in March, and you go right from one grade to another, so there’s no summer break. 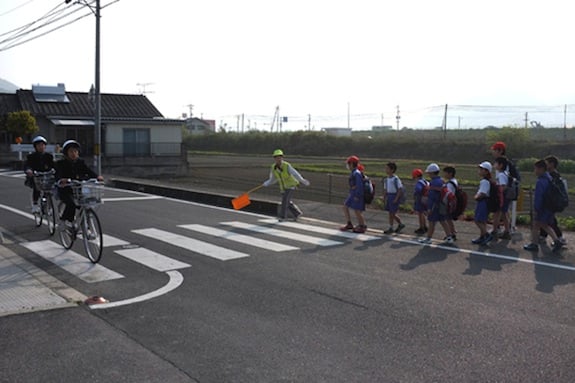 On walking to school: All the kids in our town walk to school together…as young as seven. The elder people in the neighborhood volunteer to make sure the kids safely cross the roads. They are so happy to help and to do the ‘exchange of greetings’ with the children. As parents we have to make sure our kids always say greetings ‘with big voice! Good morning!‘ (No mumbling or looking down.) If you don’t, it’s considered so rude! Parents also take turns watching the kids walk to school to make sure they do the greetings and stay safe. The parent who is watching takes notes in a community record book — things like ‘Junior high school kids were riding their bikes dangerously fast!’ or ‘Steps are wobbly and should be fixed for kids’ safety.” Then these problems are discussed at the next PTA meeting. 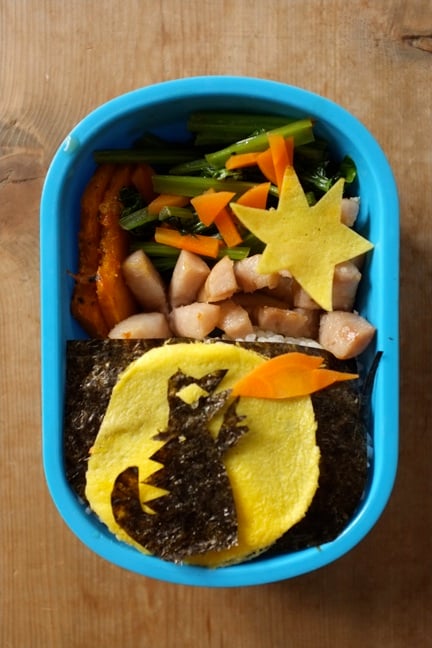 On food: Kids here eat mostly very healthy… tons of rice! Lunch boxes are mainly rice balls — sometimes wrapped in seaweed — with a little egg omelet, sausage and broccoli. The tricky part is that there isn’t labeling like in the U.S. So, when you buy eggs or vegetables, you don’t know if they’re organic or not. My husband thinks it’s because all the food is good quality, but it frustrates me not to know. In Brooklyn, I was part of a food coop and I bought all organic… Here I just have to close my eyes and buy it! 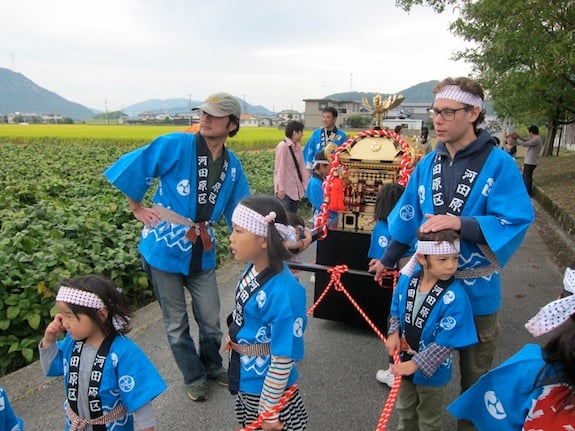 On community: Community is everything here. The town holds lots of events, and everyone goes. Once a month everyone gets together to clean the neighborhood and local Buddhist temple. When you’re out walking around, you always have to ‘do greeting,’ which is a formal bow and hello. It’s so nice, but also sometimes I think, leave me alone! On a Sunday, I might want to stay home with my family, but we have to go to a community festival. It’s very important to attend if you want your children to be accepted.

On modesty: Most department stores have separate ‘nursing rooms’ so that mothers can breastfeed. The flip side is, I never see moms nursing in public. People are very modest. Women wear a lot of black and cover their arms and legs — even in the summer! They are always covering the shape of their bodies. In Brooklyn, I wouldn’t think twice about a woman walking down the street in a tank top and no bra. Here, a whole community of people would be shocked if I wore a tank top! 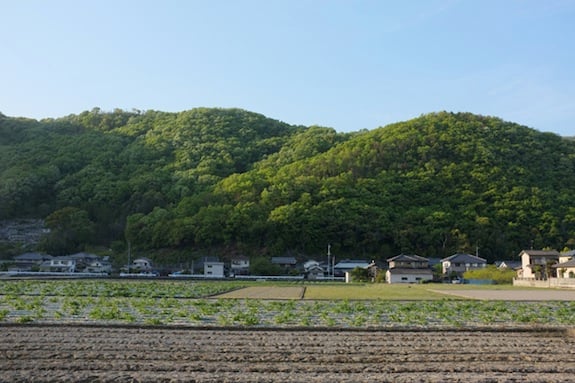 On the pace: No matter how much you make in New York, you always feel poor. School, rent, medical bills — everything is so expensive. In Japan, I found something I couldn’t have bought with money: a feeling of safety, no pressure. Childcare and school are inexpensive, and healthcare is cheap, as well. My husband and I joke sometimes that it’s like we’re living in a retirement community. You can just enjoy your time. It took me about a year to get used to not worrying about something constantly. I kept thinking, ‘Did I forget something?’ Sometimes I feel like I’m not using my brain enough so I started learning French! 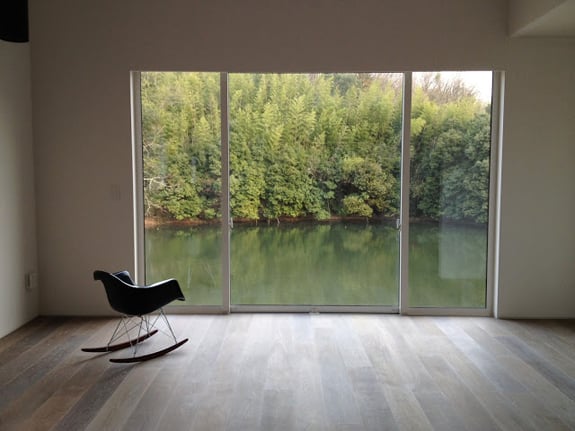 Thank you, Yoko! (And isn’t her home, above, beautiful?)

P.S. 10 surprising things about being a mom in Norway, and why French kids eat everything.

(Thank you to my fantastic friend and writer Lina Perl for help reporting and interviewing.)

36 COMMENTS
By Joanna Goddard
Motherhood
How to Help a Child After a Bad Day
November 11, 2019

166 COMMENTS
By Joanna Goddard
Motherhood
How Did You Picture Adulthood as a Kid?
November 2, 2020