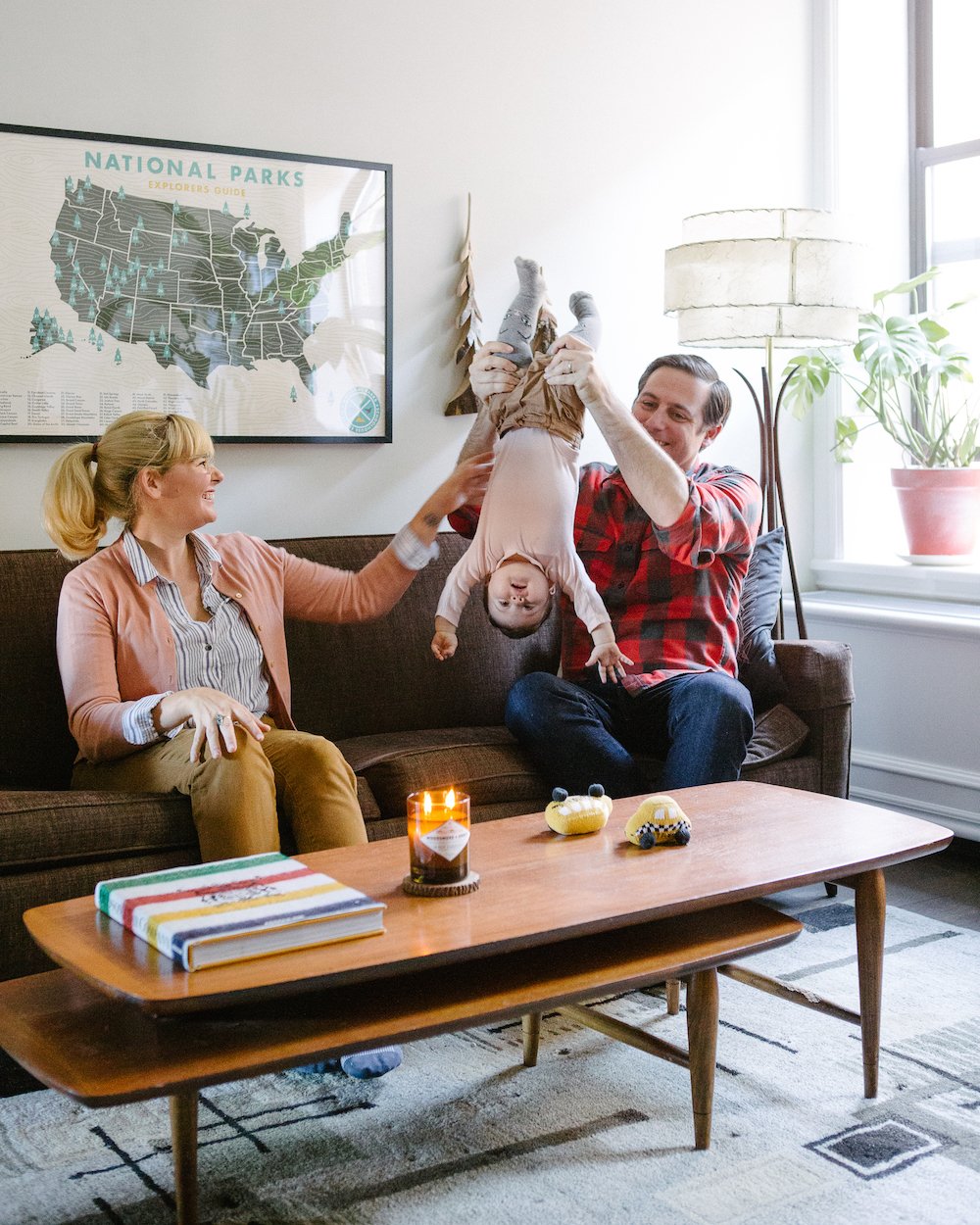 When Ryan (left) met Alan, she felt like she had found her match. The social worker and freelance director share a love of camping, space and national parks — and a whimsical aesthetic. Now married with an eight-month-old daughter and a cat named Mouse, the couple lives in a Brooklyn apartment they’ve transformed into a cabin-like home worthy of a Wes Anderson movie. Take a peek inside… 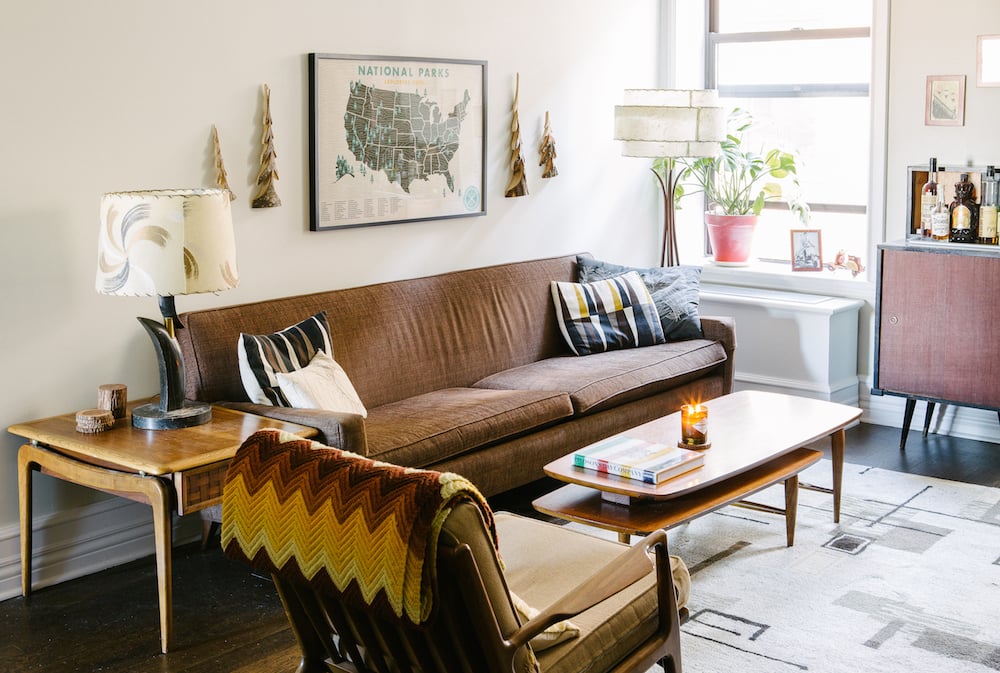 How did this cabin vibe come about?
Ryan: We almost bought a cabin in Pennsylvania, but it fell through. So when we moved here, we started getting more and more cabin-y.
Alan: We’re really into national parks. One of the first big trips we did was to Yosemite, and we took our daughter Sally to the Grand Canyon when she was four months old. 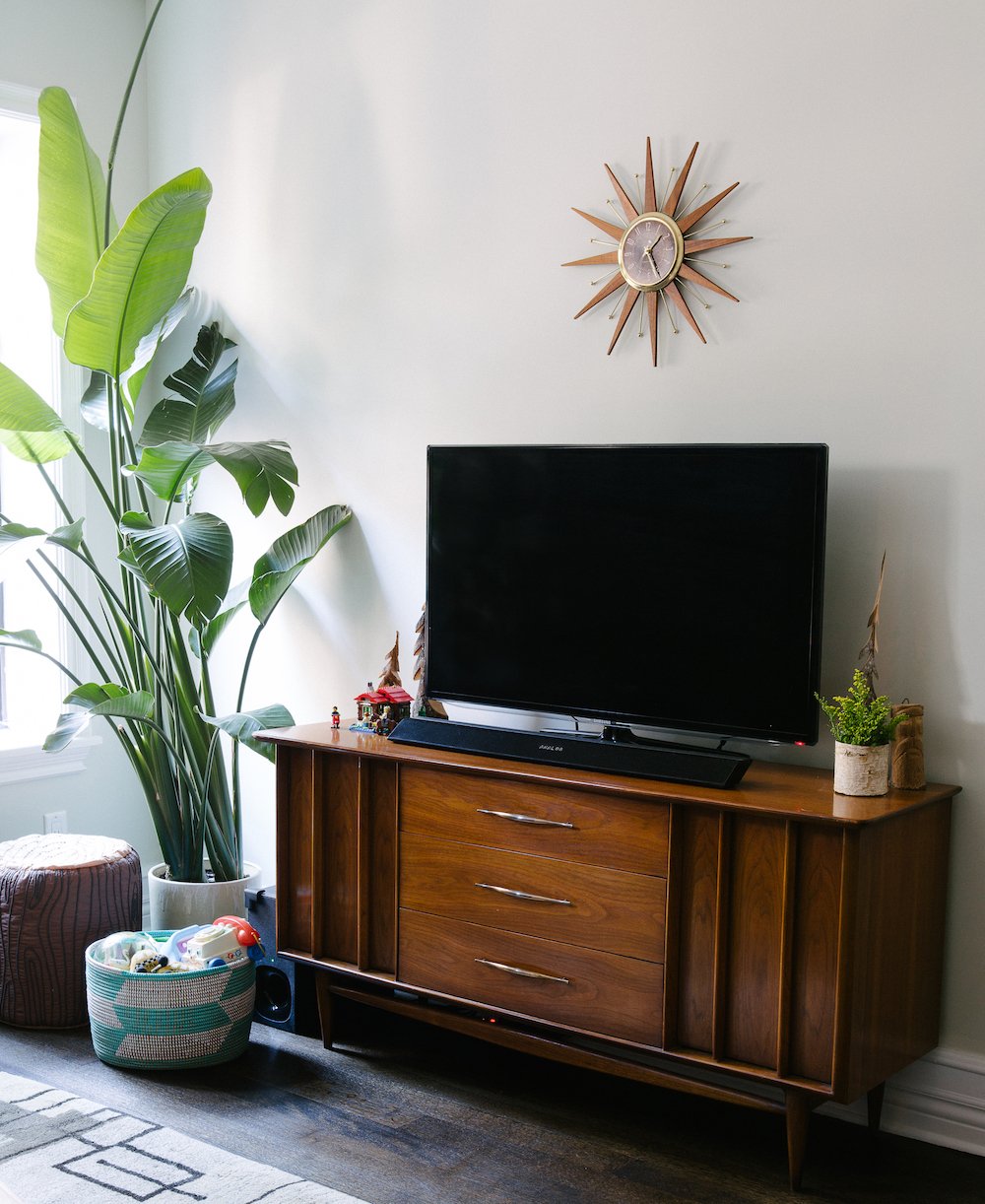 How did you begin creating that woodsy aesthetic?
Alan: We’re pretty conscious of color when we decorate — lots of teals, greens, browns and mustards. Our apartment has an overall color palette and then each room has its own variation. 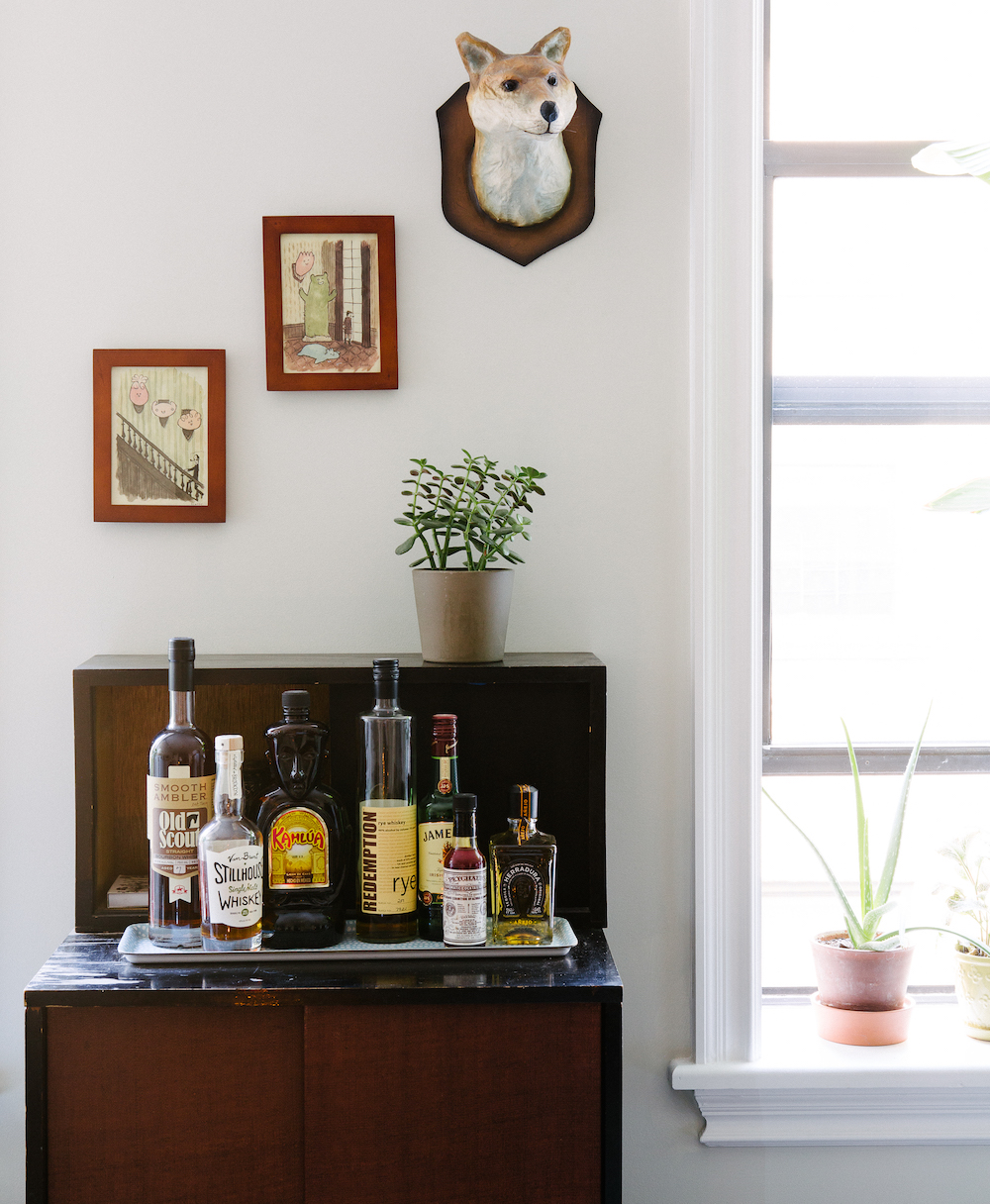 How do you guys like to unwind?
Ryan: We went through a big Moscow Mule phase after we got some Moscow Mule cups. It’s the drink we like making for guests.
Alan: We really like having friends over for dinner and game nights. But, in general, Ryan is a morning person and I’m a night owl. Ryan is so notorious for falling asleep early, her friends took pictures and started a Tumblr called “Ryan Sleeps Around.” 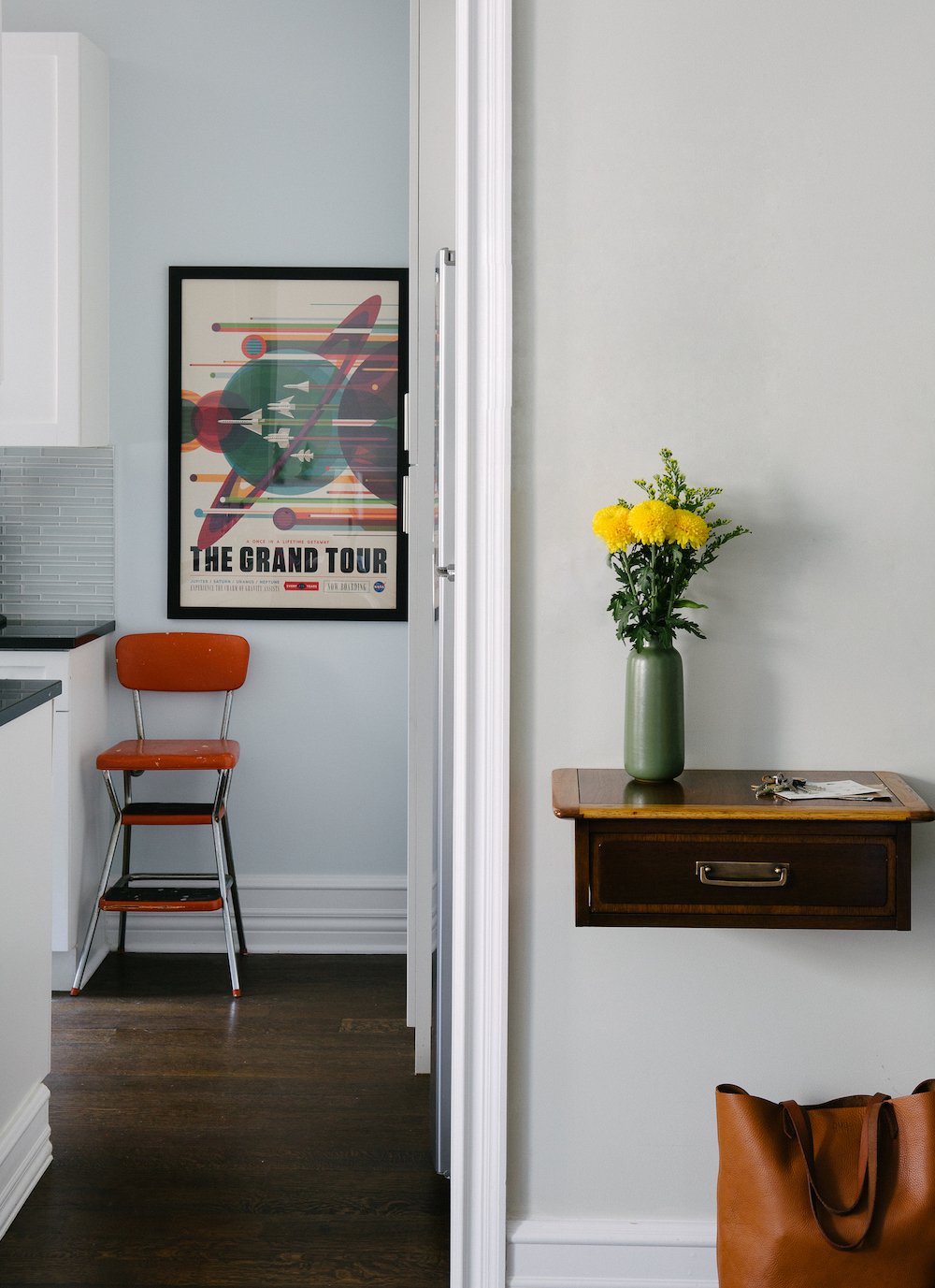 Where do you find your artwork?
Alan: One night, while awake at 2 a.m., I saw online that NASA was introducing these retro-feeling space tourism posters. I was like, “Oh god, I’ve gotta buy this, but I don’t know if Ryan will like it or not.” And the next morning, she was like, “Yeah, duh, I love it!” Now all the awesome posters are free to download. 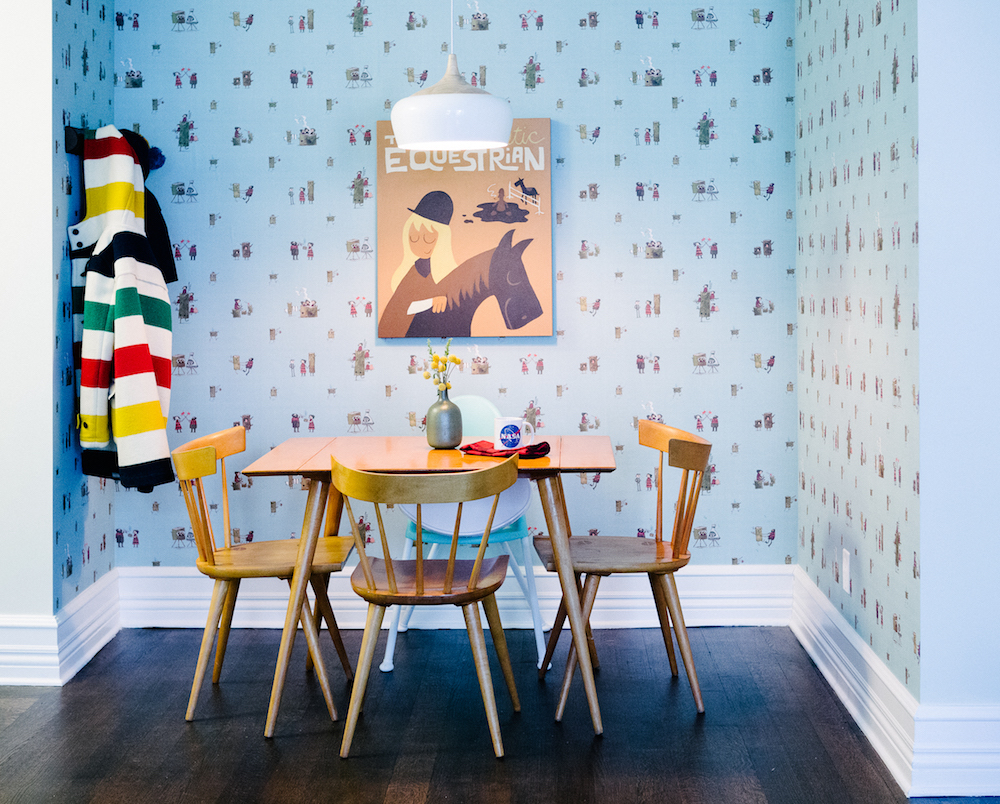 What’s the story behind this wallpaper?
Alan: Our friend Scott Campbell is an illustrator, so we took some of his lumberjack and hot tub characters and made custom wallpaper through Spoonflower. We chose a blue background, so this dining nook would feel separate from the living room.

I spy a Hudson’s Bay coat.
Alan: Ryan has this Hudson’s Bay fetish. We actually used a Hudson’s Bay blanket for the chuppah at our wedding.
Ryan: He’s right. I have a blanket, the coat, a weekender bag, playing cards and an umbrella. Sally has onesies and mittens; we also have matching backpacks. The phase is almost over, though; it’s probably tapped out. 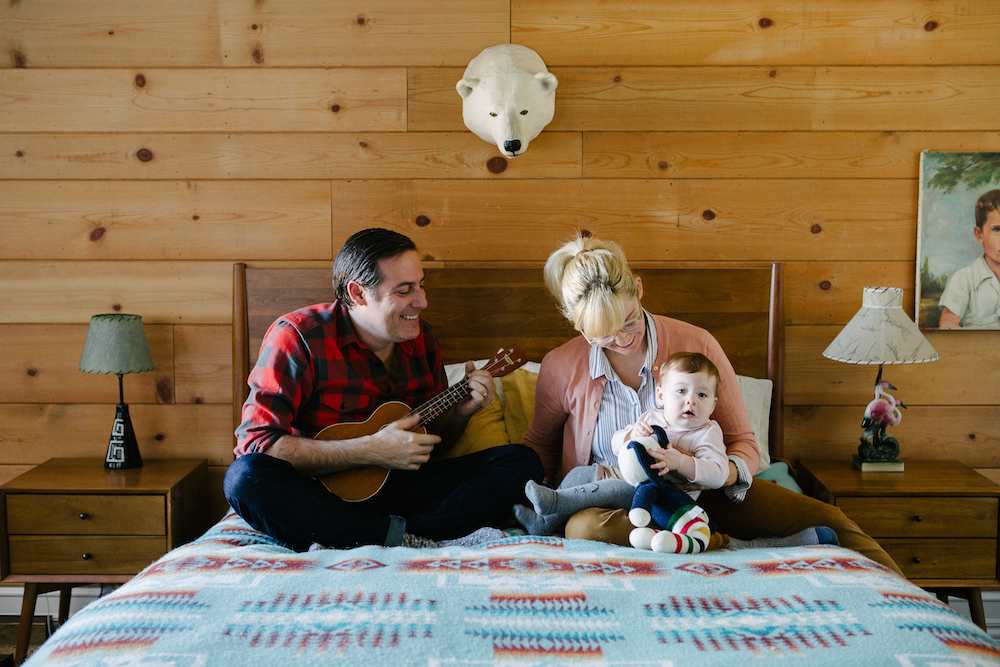 Where do you guys hang out most at home?
Ryan: We hang out in bed on Saturday mornings. Sally is always in a sweet mood. Alan plays the ukulele, which Sally loves. He’ll sing everything from The Cure to The Rainbow Connection in Kermit’s voice.
Alan: I played all sorts of instruments growing up (drums, bass, guitar, keyboard), but about five years ago I got a ukulele and never looked back. It’s the perfect instrument: It’s totally portable, doesn’t bug your neighbors, and has just about the most happy-go-lucky sound you’ll ever hear. I would love to teach Sally and Ryan someday. In the 50s it used to be a popular first instrument for kids and I’m pretty sure it’s making a comeback. It sounds much better than the recorder, that’s for sure.

Did you DIY the wood wall?
Alan: Yes, it was one of the first things we did when we moved in. We found the wood at a building materials store, and our friend Ryan came over with a saw and nail gun. We put it up in a day; it was surprisingly easy. 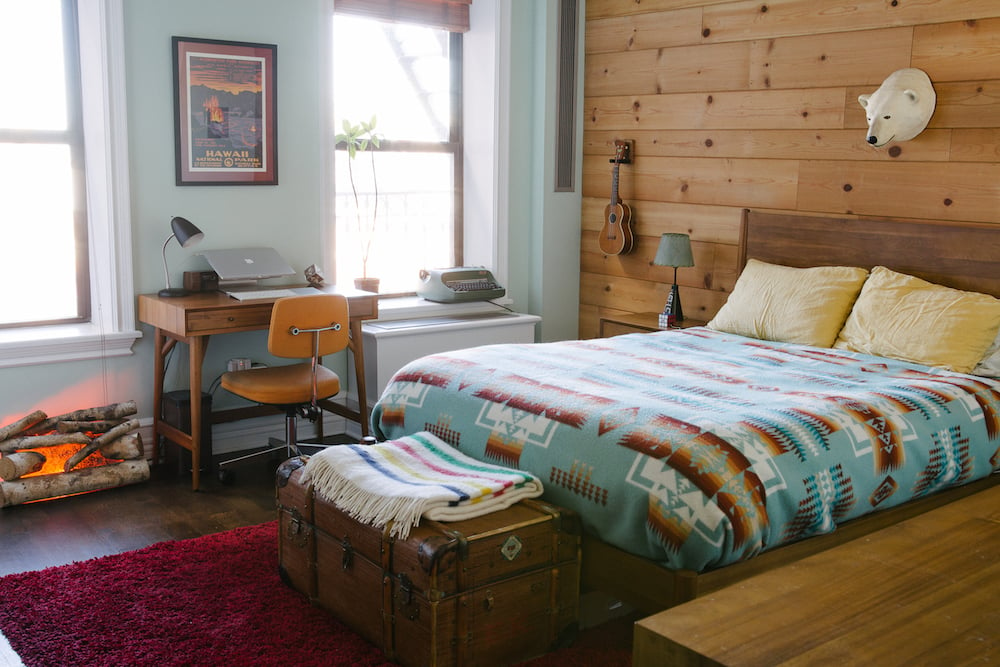 What’s your daughter’s favorite thing about the place?
Ryan: Definitely the papier-mâché polar bear. Sally was a newborn, she was obsessed with it. She just stared at it all day. We found it in Austin, when were were there for a friend’s wedding. We love buying knickknacks when we travel. We’re totally those people that hit the gift shop before the main attraction. 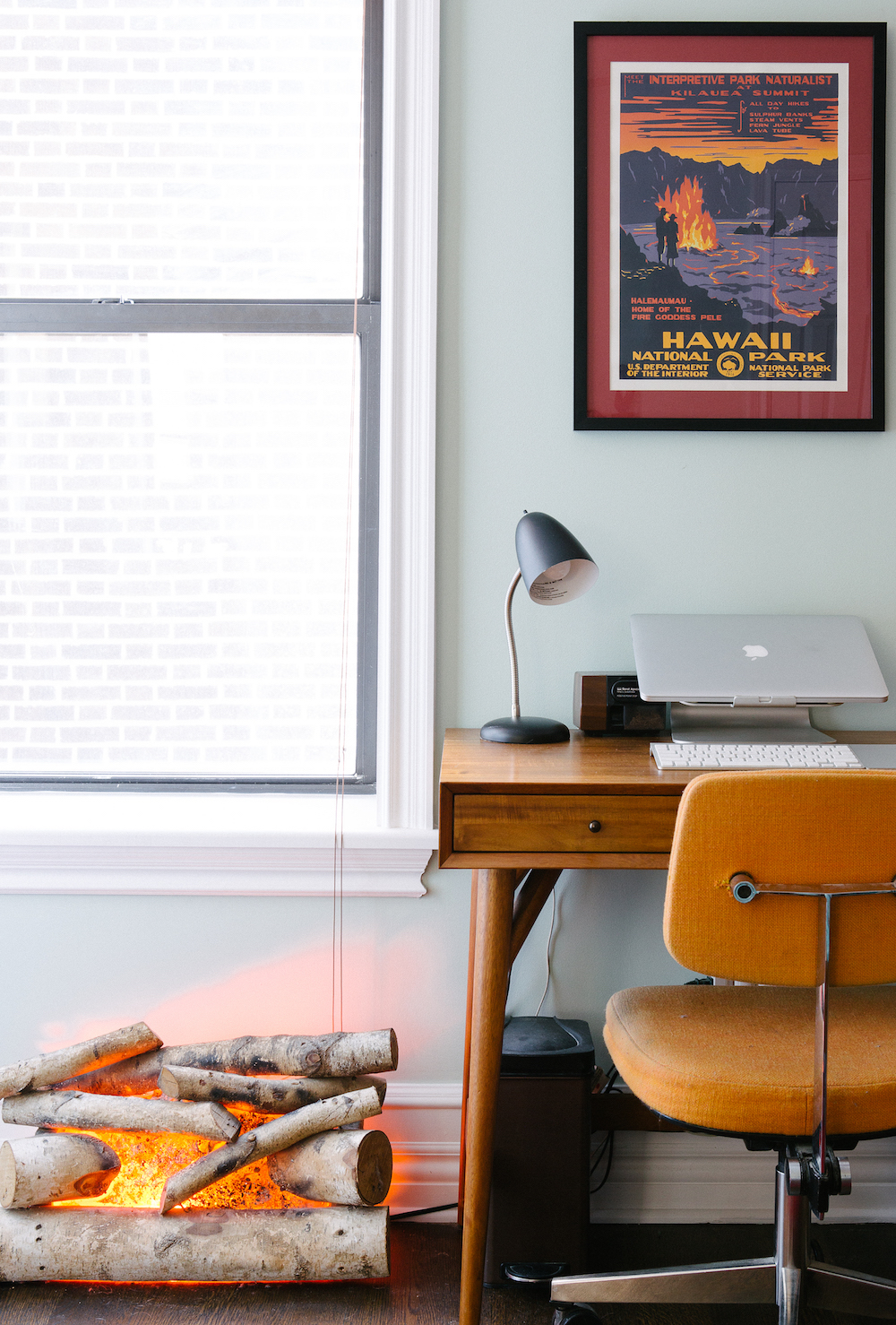 Do you turn on this faux fireplace a lot?
Alan: Yes, we put the logs on every night when we go to sleep, and it’s a perfect night light.
Ryan: I love that it flickers. 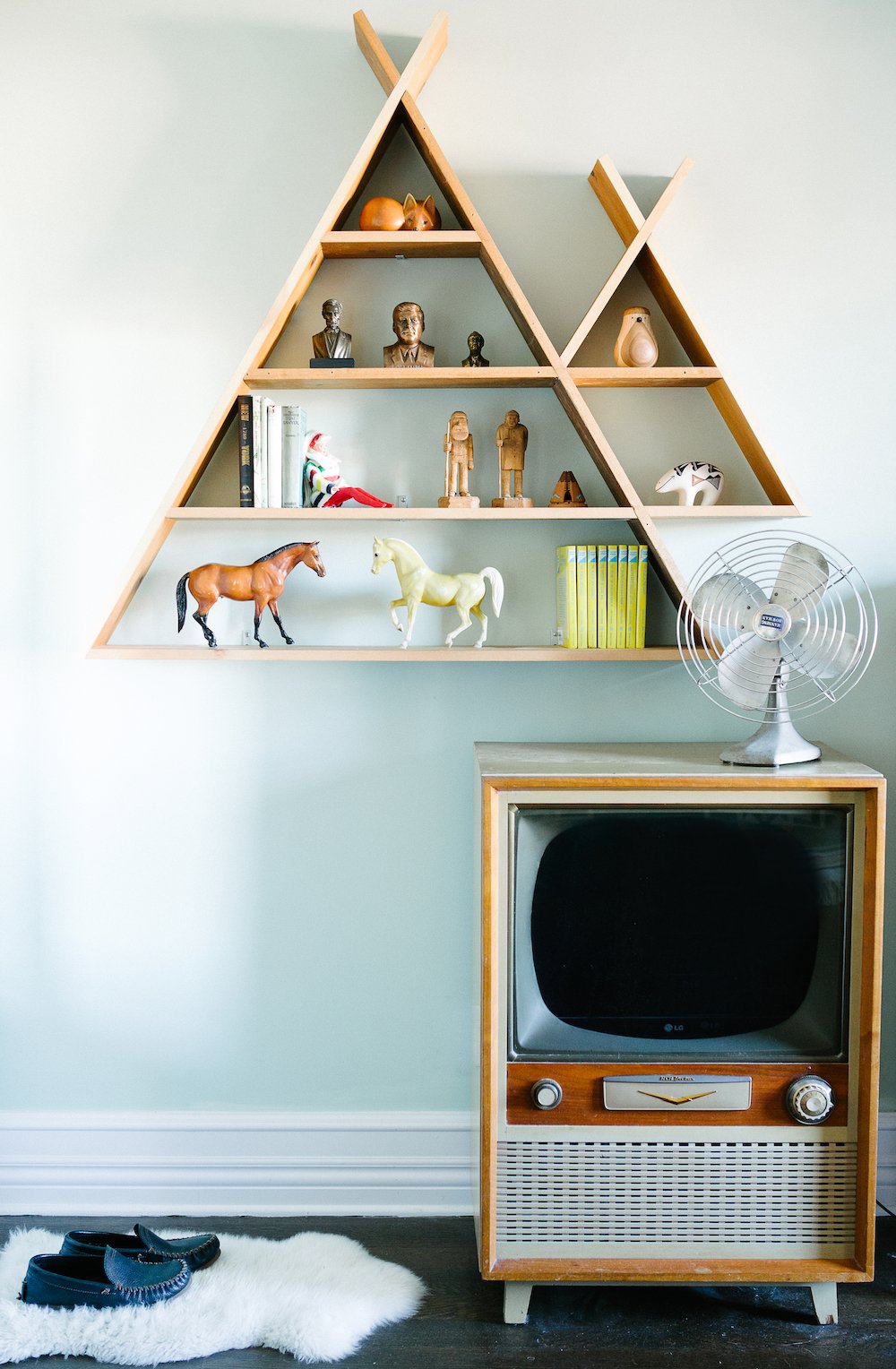 Do you have any insider tips for national parks?
Ryan: Pick up a National Parks Passport. Every national park has a stamp or two at the visitor’s center. We also like staying inside the park if possible. There are some fun old-timey lodges that haven’t changed in years, which really complete the experience.

What about closer to home?
Alan: We also like to go out of town on weekend getaways. We discovered Rip Van Winkle Motor Lodge in the Catskills.
Ryan: They have sweet little one-bedroom cabins. Another weird but great place to take kids is Grounds for Sculpture in New Jersey. It’s huge and has all these nooks and crannies. 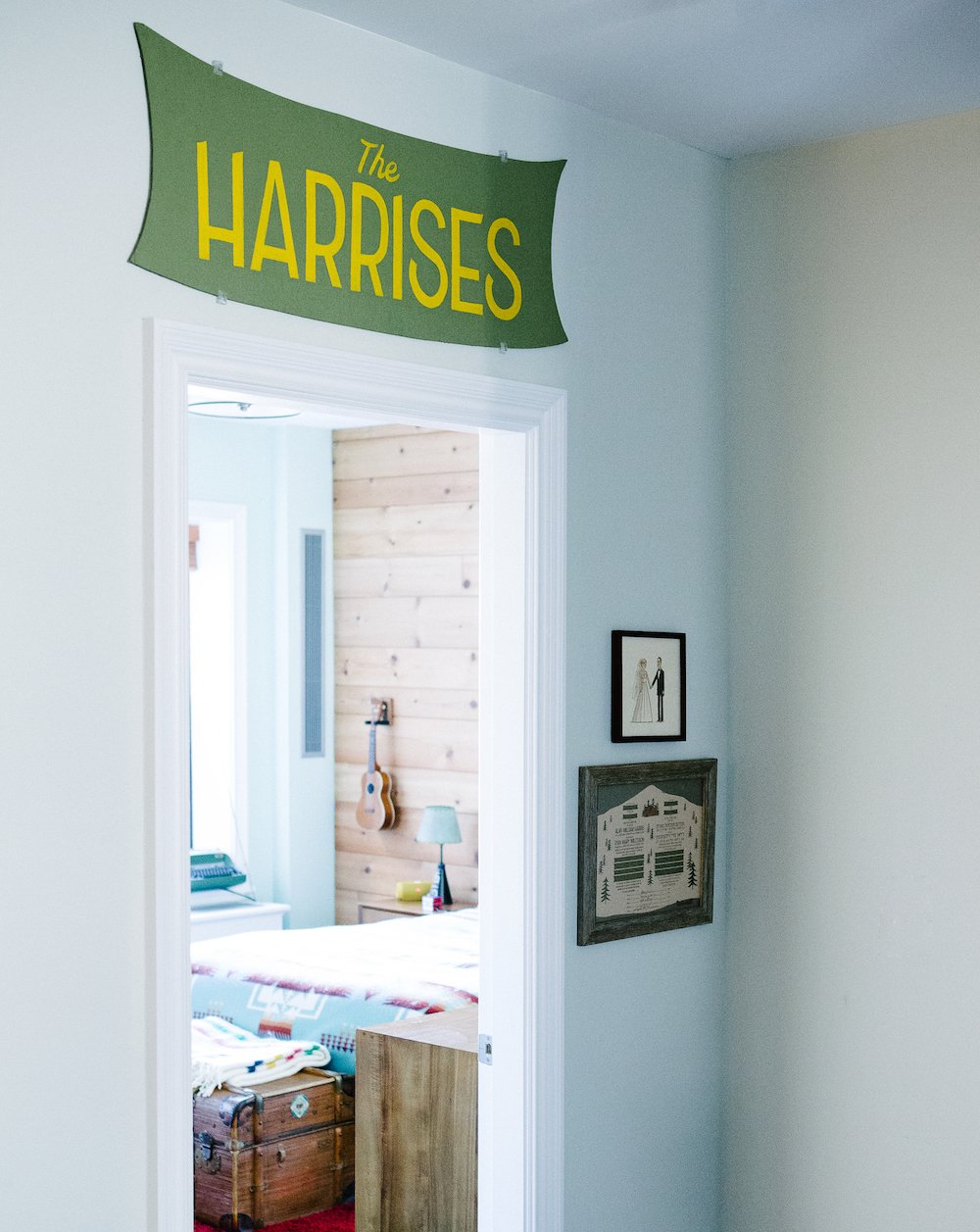 How did you guys meet?
Ryan: We met on OkCupid. Alan asked me out for a drink, but I was in San Francisco for a work conference. He said, “That’s funny because I’m going to be in San Francisco visiting my parents.” I was like, “Want to meet up?” So our first date was super fun because we were discovering a new city together. We went to one of those awesome hole-in-the-wall burrito places in the Mission.

It’s amazing how similar your aesthetic is.
Ryan: We’re basically the same person. We just really like each other.
Alan: We wear our hearts on our sleeves, which is a nice thing for a marriage. 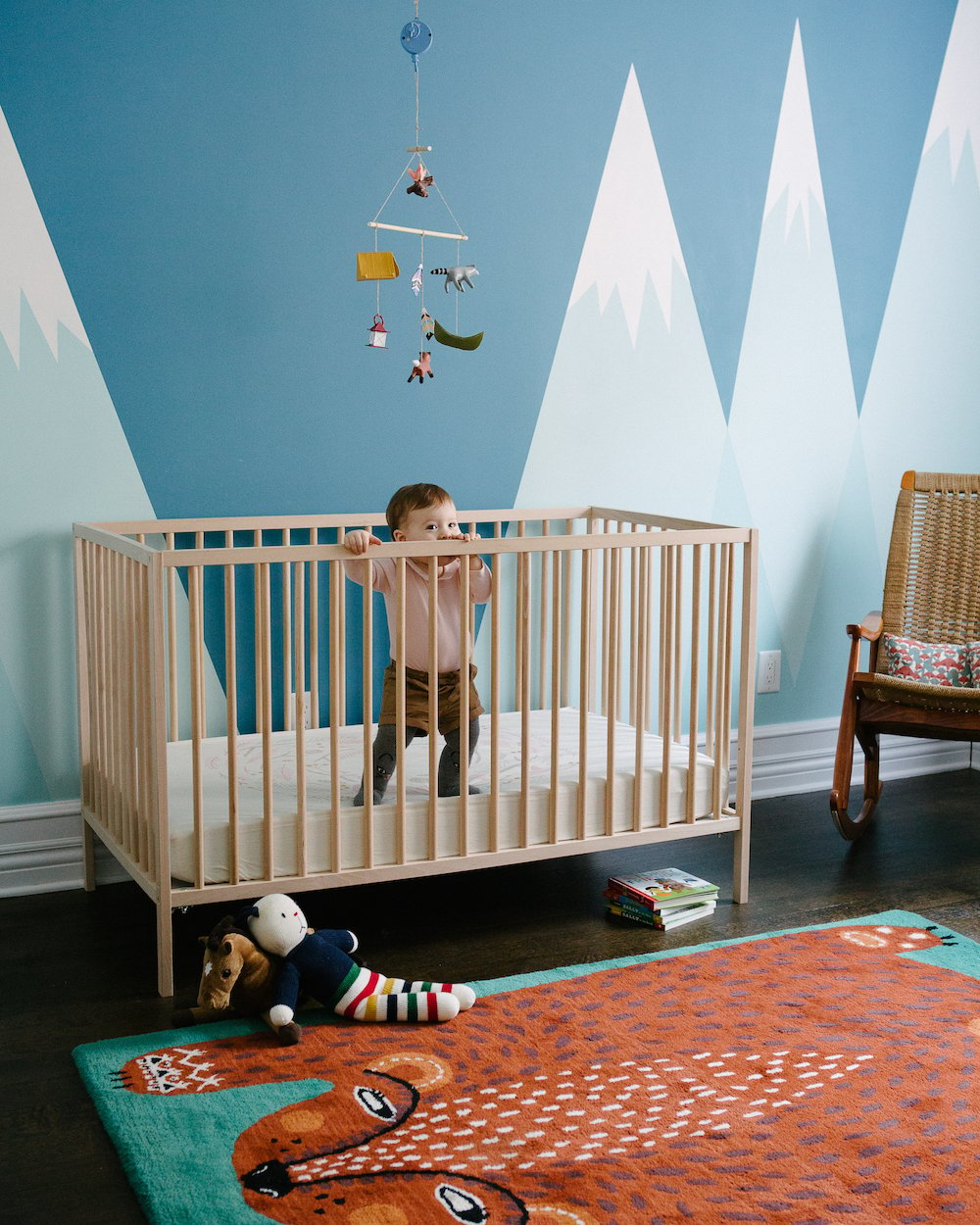 Tell us about this awesome mountain mural.
Alan: We saw a poster on Etsy with a mountain background that we loved, so I painted similar mountains onto the wall. The process was kind of crazy: I mapped it out on Photoshop. I plotted out the points on the mountains mathematically and took thumbtacks and yarn and taped it all. We went to Home Depot and found the paint, and did it up! 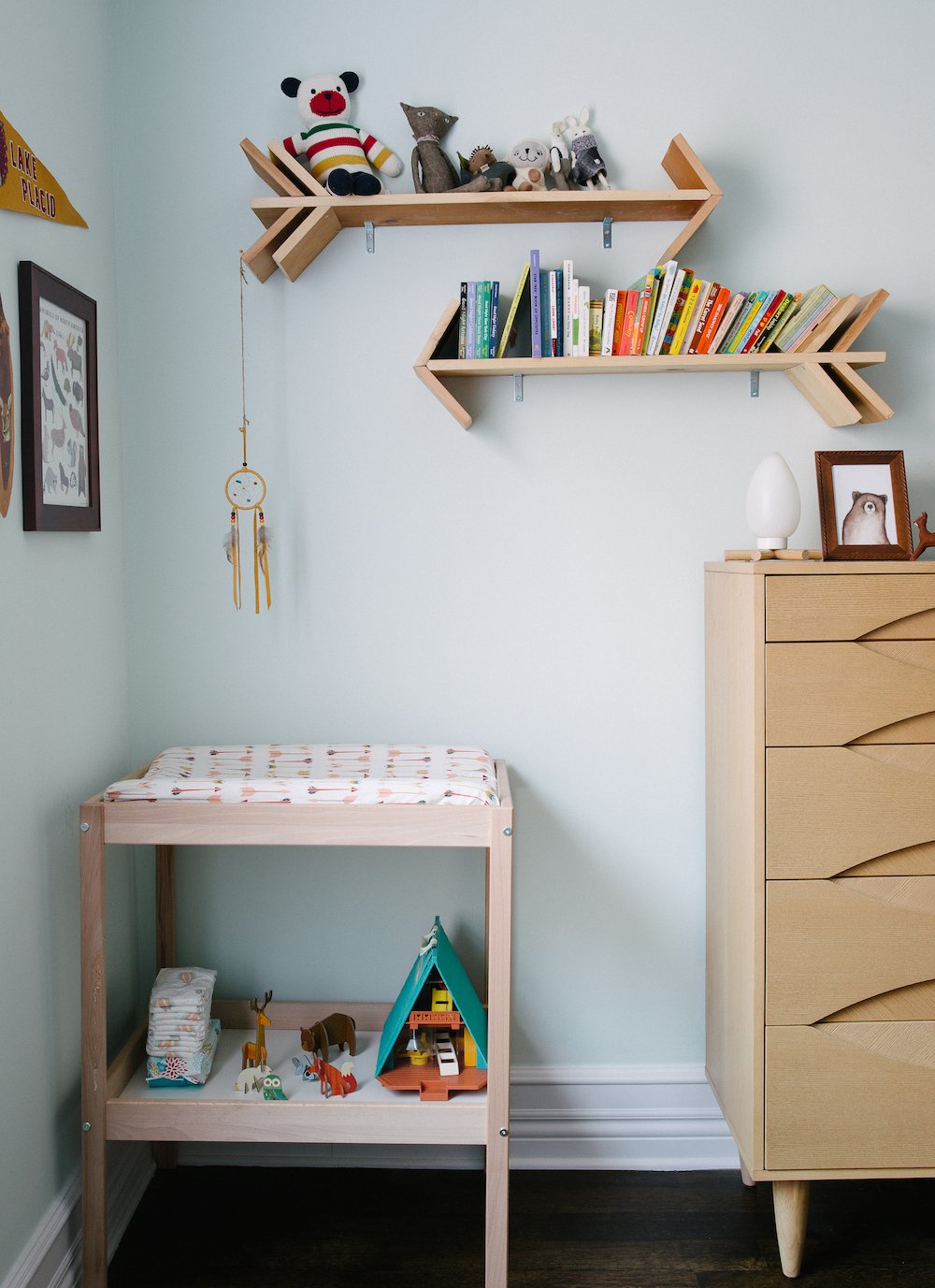 How did you choose Sally’s name?
Ryan: Our daughter’s name is Sally Harris. We thought it sounded like a sweet girl-next-door name, and a little 60s. We’re also into space, and Sally Ride was the first American woman in space.
Alan: She’s partly named after Sally Kimball in Encyclopedia Brown. 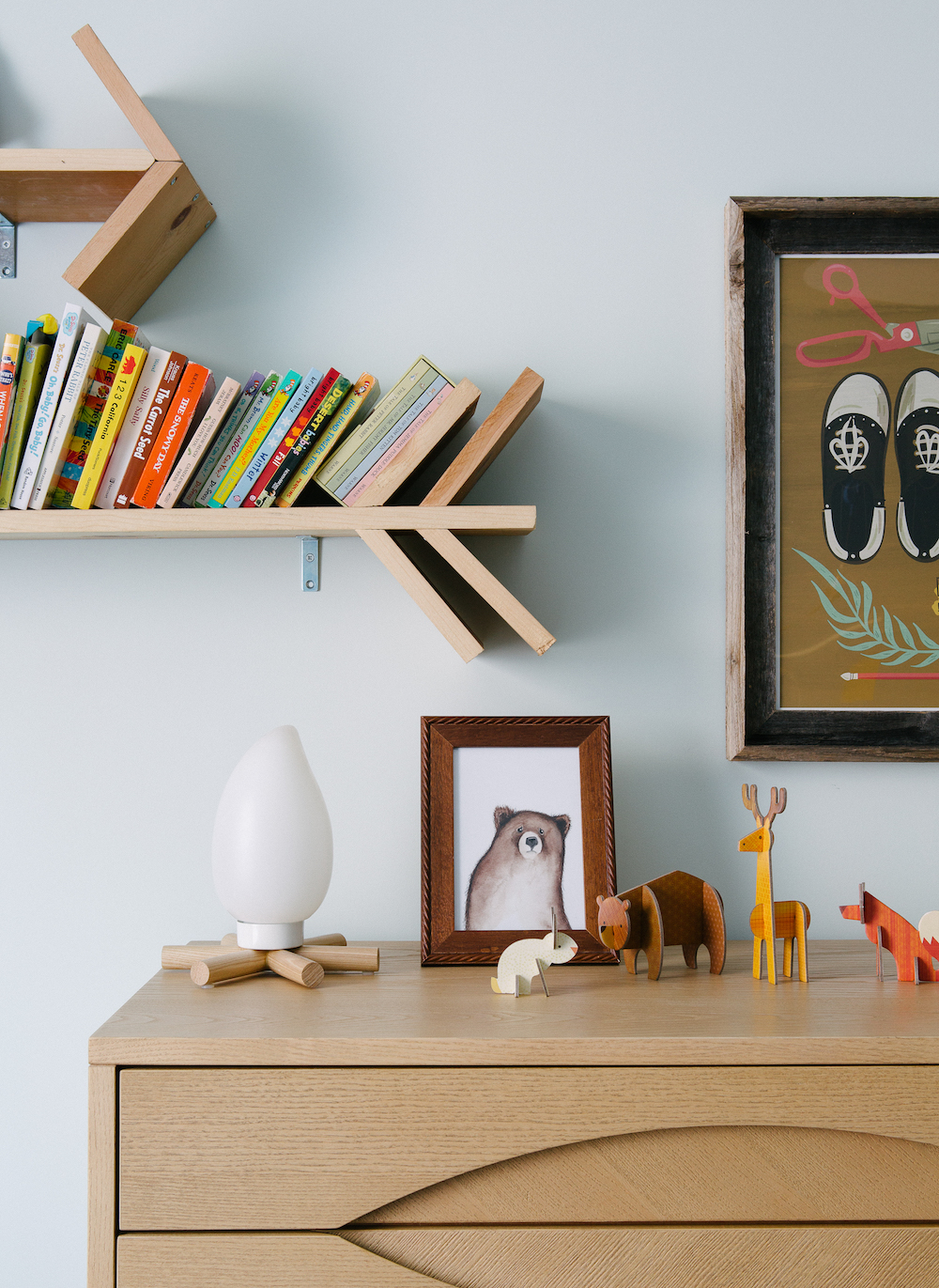 Your home feels straight out of a Wes Anderson movie. Were you inspired by him?
Alan: I’m a commercial director, and it’s fair to say Wes Anderson has had an influence on my style, but so has Christopher Guest, John Hughes, Mike Nichols and a handful of other film directors. Yet I think our decor style is more about Ryan and my gravitating to playfulness in design. One thing I love about our apartment is the fact that there are characters all over. From a cartoon bearskin rug to wooden figurines, everywhere you turn there are eyeballs looking in various directions. I like that Sally is growing up in a world that sparks imagination. 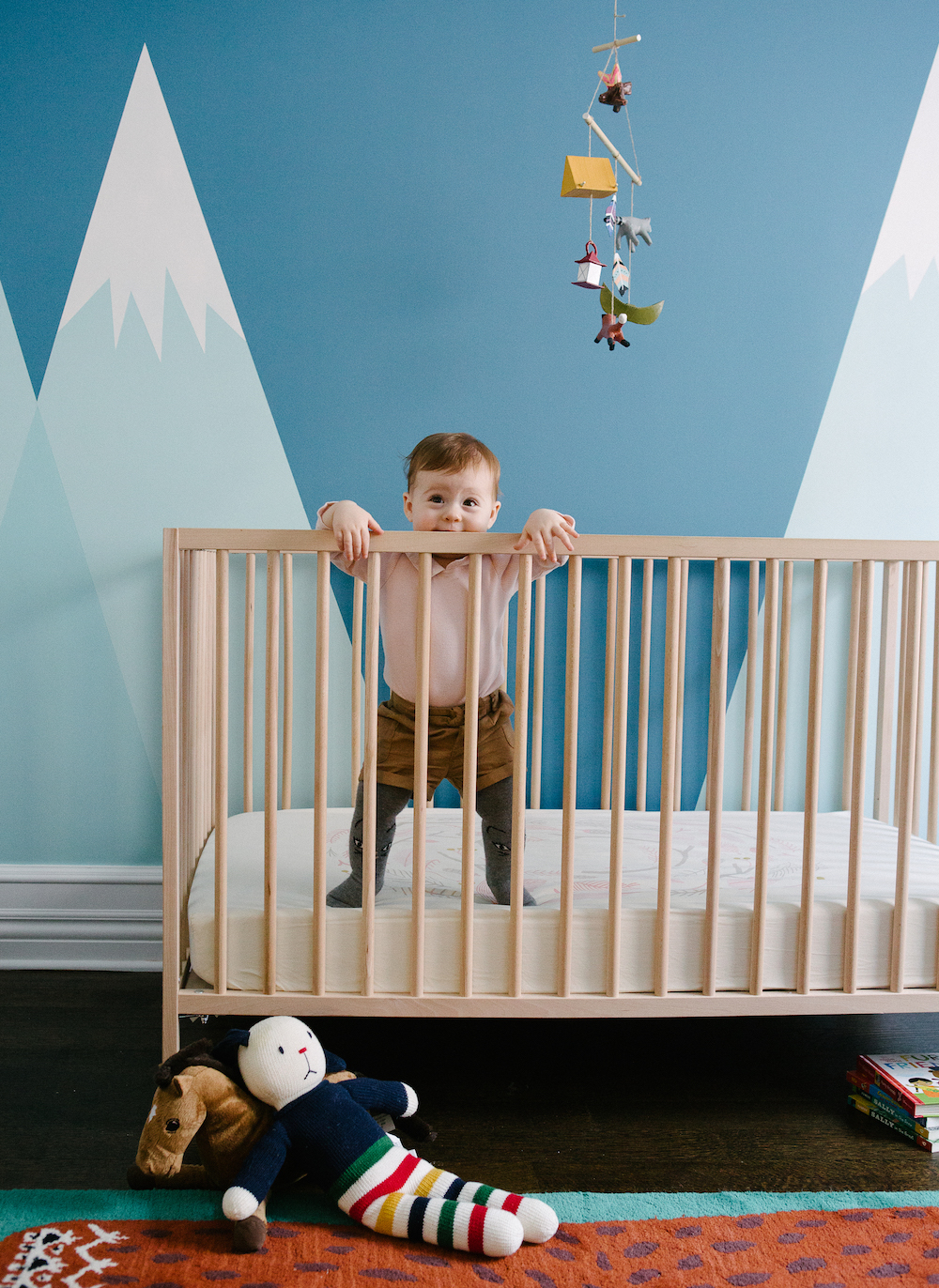 Thank you so much, Alan, Ryan and Sally!

P.S. More home tours, including a beautiful house in San Francisco and a New Hampshire cottage.

(Photos by Alpha Smoot for Cup of Jo.)