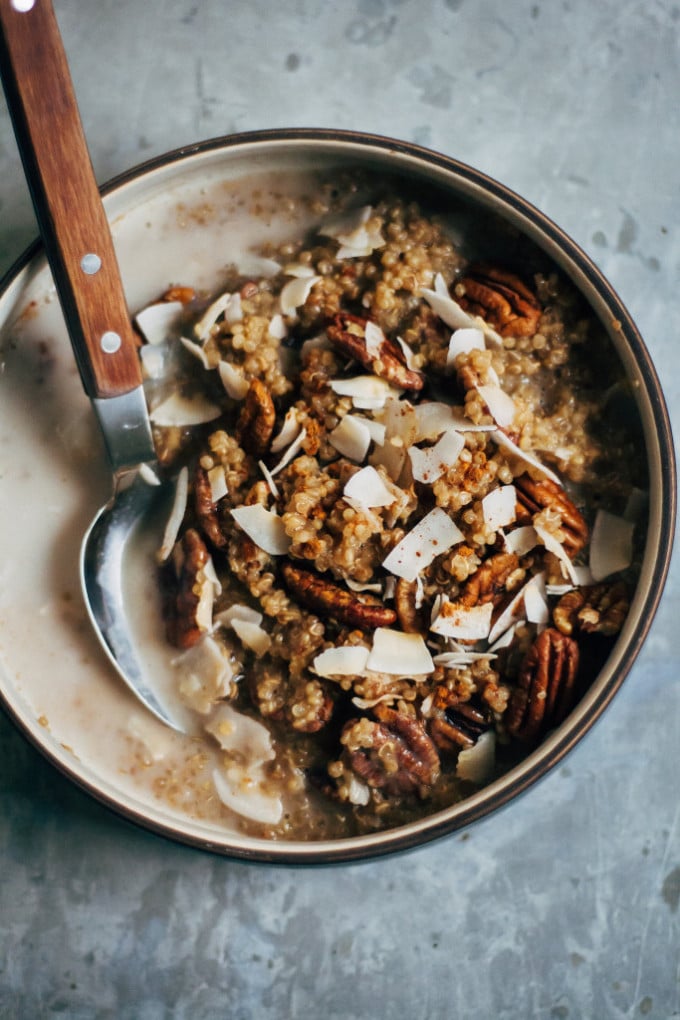 There’s no better time for a warm, fortifying breakfast than a chilly January morning. So, today, as part of our month of tasty breakfast dishes, we’re sharing a hot cereal recipe that gives oatmeal a run for its money. Sarah Aldrich of the food blog Well and Full tells us how to make a chai-infused quinoa bowl that’s packed with flavor and nutrition…

This recipe was inspired by one of my readers, a diabetic and a vegetarian trying to go vegan. She felt frustrated at the lack of vegan breakfast dishes that weren’t laden with simple carbs or sugar. Quinoa was a natural choice, as it’s a complete protein, which helps keep blood sugar steady. You prepare it like you would oatmeal, but the recipe uses almond milk and chai tea, which makes it taste sweet without adding sugars. The whole recipe takes less than a half hour to make, and can even be stored overnight in a mason jar for busy bees on the go in the morning. 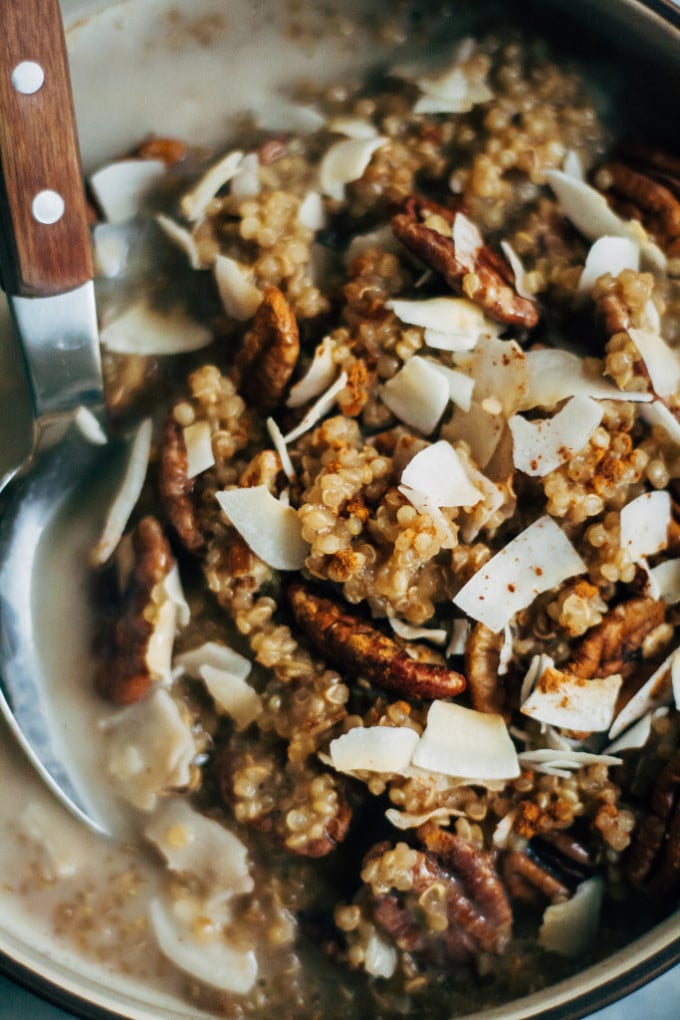 Before cooking, be sure to rinse quinoa well. This removes saponin (quinoa’s natural coating), which can make it bitter.

In a small saucepan, combine almond milk, quinoa and chai tea bag and bring to a boil. Once almond milk is boiling, remove the chai tea bag. Add coconut sugar (if desired) and stir. Reduce heat to a simmer and cook quinoa, covered, for about 15-20 minutes.

When quinoa is done, remove from heat and keep covered for another 5-10 minutes so almond milk can fully absorb.

To serve, put quinoa in a bowl with a little more warmed milk. Garnish with pecans, coconut and a sprinkle of cinnamon. 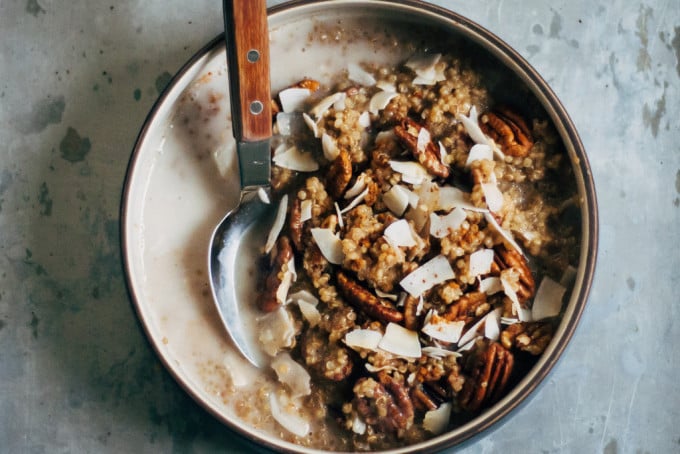 Thank you so much, Sarah!

(Recipe and photos by Sarah Aldrich . Thanks to Stella Blackmon for helping with this series.)

All these years later this is still one of my favorite post run breakfasts!

This looks so comforting and warm. What a way to start a cold winter day!

In love with this idea. And really anything chai-spiced.

This is such a great recipe, especially in the middle of winter when all I want is blankets and cuddling by a fireplace ? thank you for sharing!!!

I made this dish this morning and it just didn’t taste like much. At least it was healthy. LOL.

I always run out of breakfast ideas. I’m looking forward to try this. Quinoa is on my list to try to make at home. I love it in salads.

This looks so yummy! And also relatively quick for breakfast

Wondering how one does this the overnight version. Any cooking or just everything cold in the mason jar?

If the reader who inspired this post–“the diabetic vegetarian trying to go vegan” would like to reach out to me I’d love it–this is also me! (Ok, might not make the full vegan jump but getting a lot closer). I’d love to share recipes. (mgreene361@gmail.com)

This sounds fabulous! My fiancé loves making overnight oats, and this sounds like the perfect dish to make an surprise him some morning, he would LOVE IT!

I must make this ASAP! I love quinoa, and I was thinking about cooking it as a breakfast cereal, but didn’t really know what flavors to combine to make it less boring, this seems perfect!

This looks so good! I want to try this, I’ve never put quinoa with milk, I’ve only ever used it as a rice substitute :) Thanks for the idea!
Lucy xoxo
http://lucyannblog.blogspot.co.uk

I eat a lot of chia puddings and overnight oats for breakfast, this sounds like a lovely way to break up the routine!

That sounds amazing!! I’m going to give this a try! We love quinoa in our home, so it’s perfect.

My goodness, this sounds delicious!

This looks so yummy!

Oh, i missed the coconut milk in that smoothie in a bowl.

When you are done simmering on the stove, is that when it goes in the jar in the fridge for overnight oats?

Looks absolutely delicious! I actually really love quinoa for breakfast, whenever I make some quinoa for lunch or dinner I always make extra to add to breakfast. That way I just add some almond milk or yoghurt the night before, pop it in the fridge, and top with berries for breakfast, almost like an overnight muesli. So good!

YUM! we just made this for a late breakfast and topped with a touch of maple syrup (in place of the coconut sugar).

I was wondering what to use instead of coconut sugar! Thanks!

This is so smart and looks so good! Great to have a fresh idea for winter breakfasts:) I’ve been majorly into these breakfast cookies that I just wrote up. Need sweet for breakfast!

I make quinoa all the time and never thought to add a tea bag to the cooking liquid. The flavor possibilities are suddenly endless :) Thanks for the great idea!

Ooo yum!! Any recommendations on the best brand of chai tea to use?

My favorite is the Tazo brand.

That seems very tasty! I love those breakfast. Although I must admit, I can’t cook much early on the morning, I just go for a simple: Cup of milk or tea with milk and a toast with cheese and may be some jam.