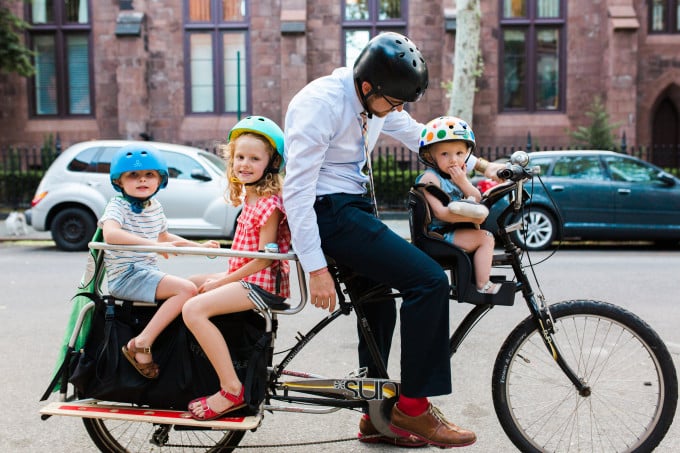 I’ve always loved biking with my boys, but this summer in Brooklyn, I’ve seen some seriously inspiring biking parents. They ride around town with multiple kids of all ages — as well as teddy bears, groceries and the odd puppy. Here, I asked them how it all works… 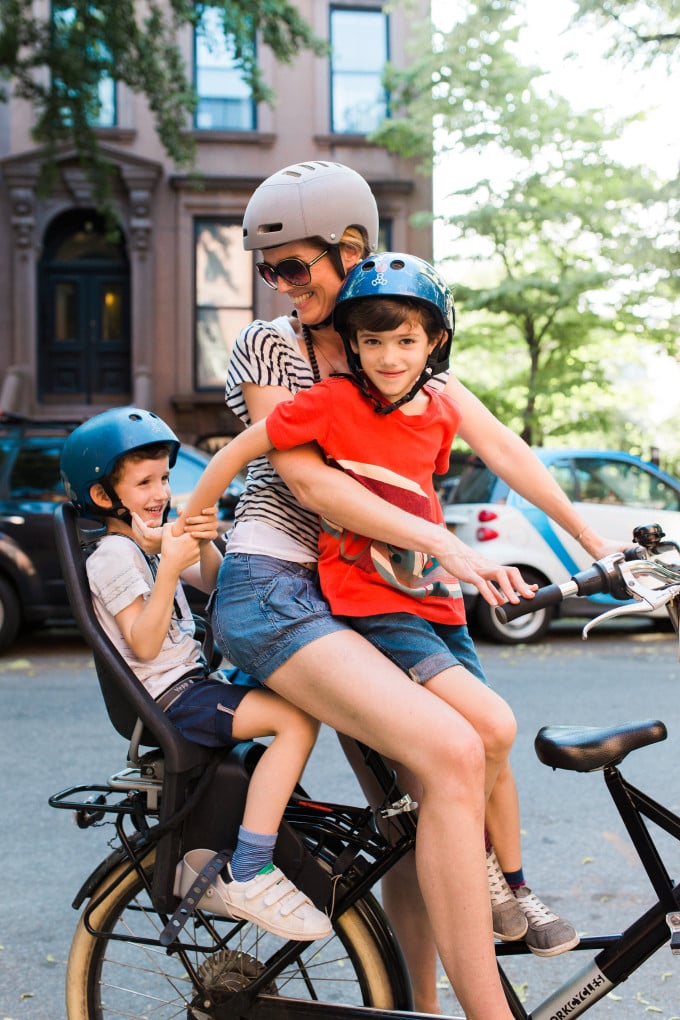 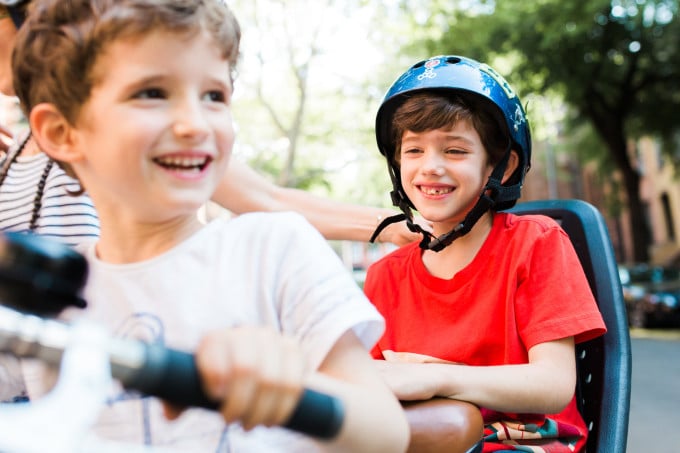 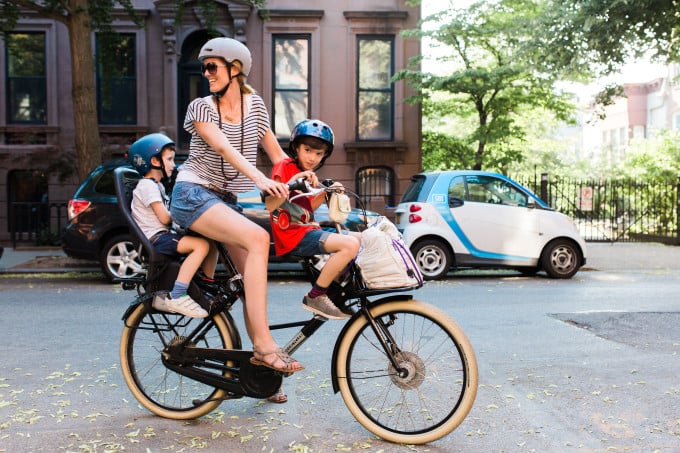 Marte rides a WorkCycle with her two boys Mateo, 7, and Arlo, 5. They have a Yepp child’s seat in the back and an extra regular seat for her son up in front. They wear Lazer helmets.

Marte: We ride four miles to the boys’ school — there and back. In the winter, we just wrap up. For me, it’s never that cold because it’s such a workout. For Mateo sitting in front, I make sure he has a face mask and real ski gloves.

I grew up biking in Germany. I biked to school every day from the time I was 6 or 7. My parents would never drive us, except maybe in the hardest winter snow. You have your rain outfit and you’d bike. It’s fairly normal.

Downhill we’re unstoppable, there’s just so much weight, you’re flying! Uphill is a killer. I tell them, I’m not going to be able to talk until we’re at the top of the Brooklyn Bridge. Once Mateo paused for a few seconds and then asked me, So, Mommy what happens when you die? Seriously, he chose that moment.

Our deal is that they’ll ride me around when they get bigger. After all these miles that I’ve ridden, they owe me. 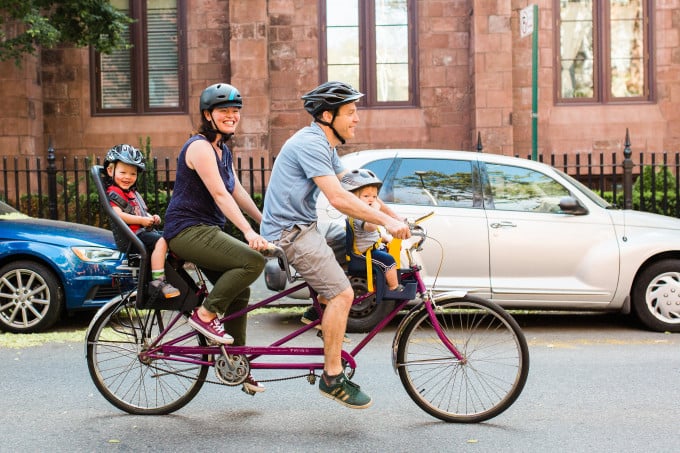 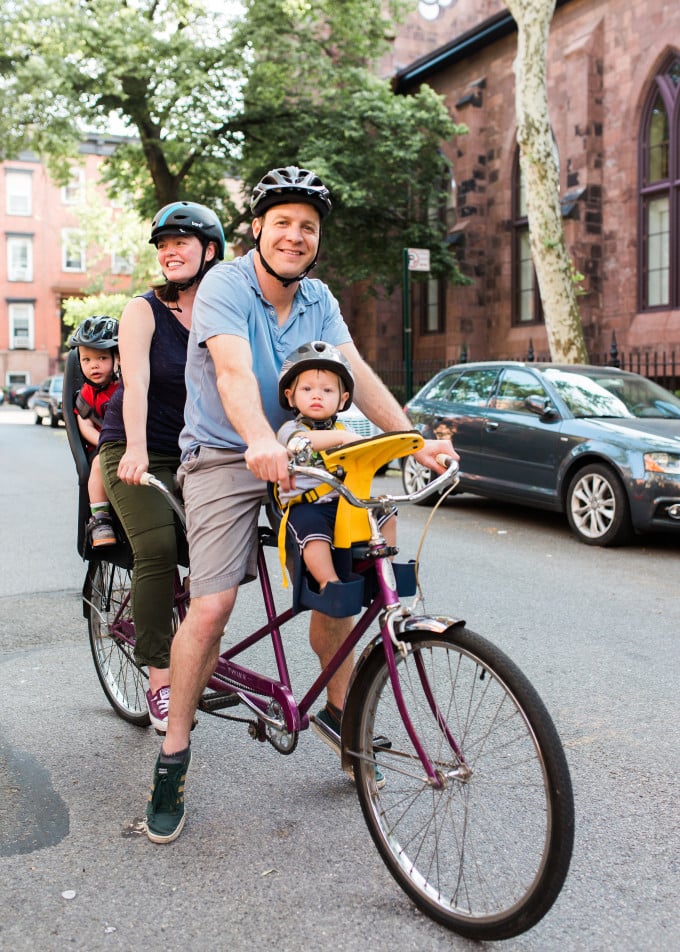 Megan and Mark ride a vintage Schwinn tandem with their sons, Ryan, 2, and Drew, 1.

Mark: My grandmother asked for a convertible for her 50th birthday, and her husband gave her this Schwinn tandem instead. My mom then got it as a hand-me-down, and my sister and I rode it growing up in Connecticut. We used to deliver newspapers off the back.

I’m the motor of the bike. Megan gets nervous riding on the city streets. She shuts her eyes!

Megan: I’m awful on bikes, but this allows us to ride as a family. I’d never feel comfortable biking with kids or even on my own. We did the Five Boro Bike Tour on this. It was 40 miles. We get so many comments. In fact, when we don’t get commented on, I get annoyed! 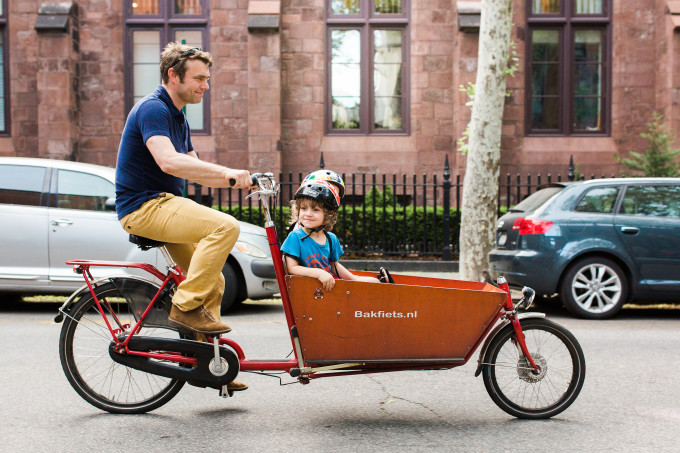 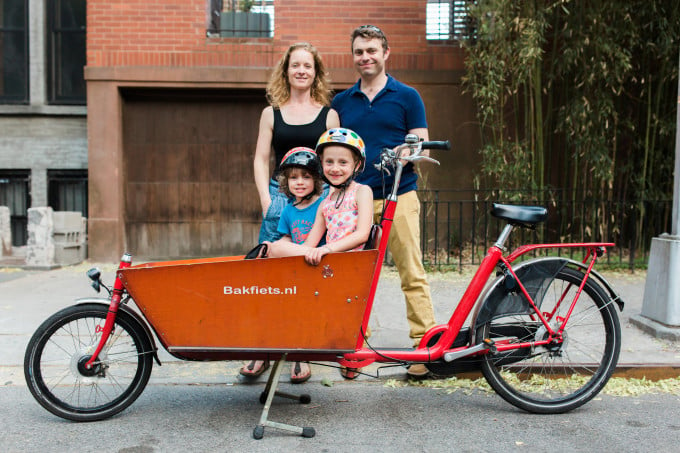 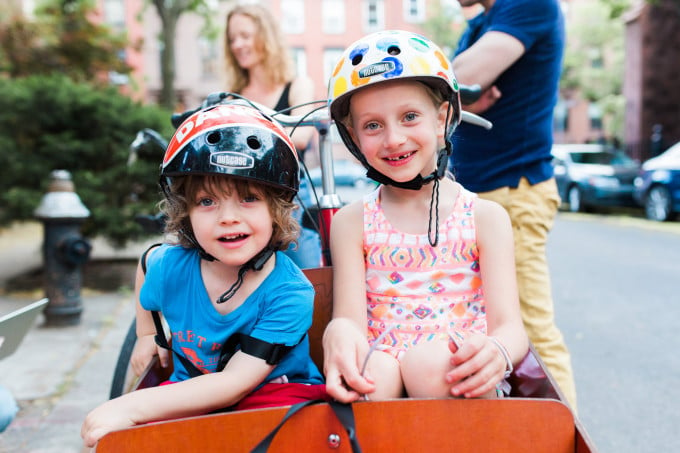 Graham and Charlotte ride a Dutch bakfiets, or cargo tricycle, with their kids, Hannah, 6, and Alexander, 6.

Graham: We brought the bike over from Holland, where we rode with our son from birth — his car seat was strapped in with a bungee cord. It was really secure. We took him everywhere. It’s not that heavy. We did Williamsburg to Prospect Park a couple weeks ago — 14 or 15 miles. It’s easier than you’d think.

Charlotte: When the kids aren’t with us, we use it for groceries. We had 160 pounds of sand in it the other day to fill our sandbox in our garden!

Graham: The kids chat and look at things; that’s the nice part about having them in front of you.

Charlotte: We mostly tell them to keep their hands in. 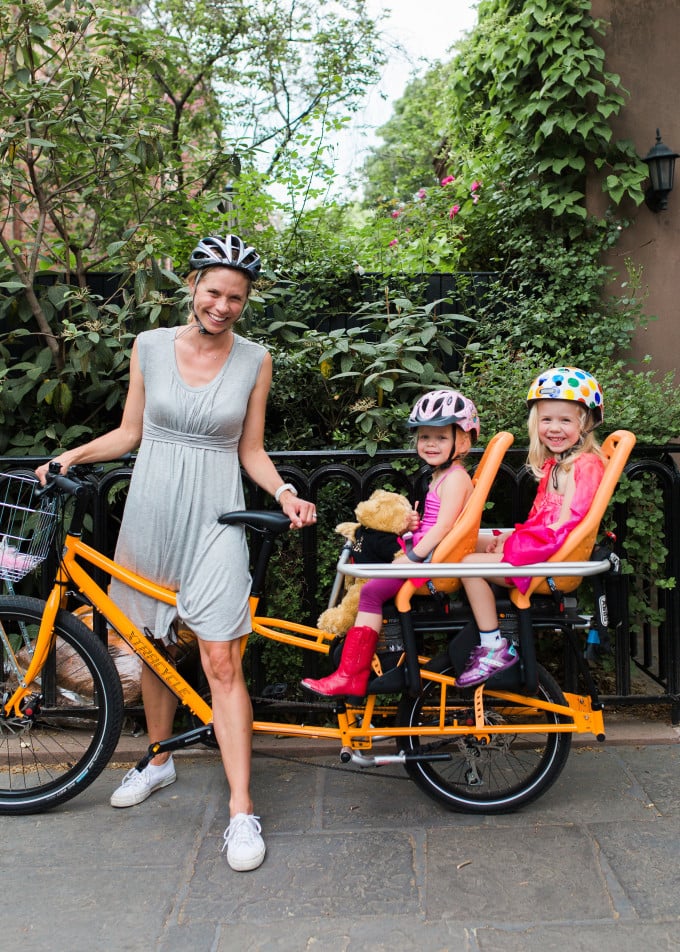 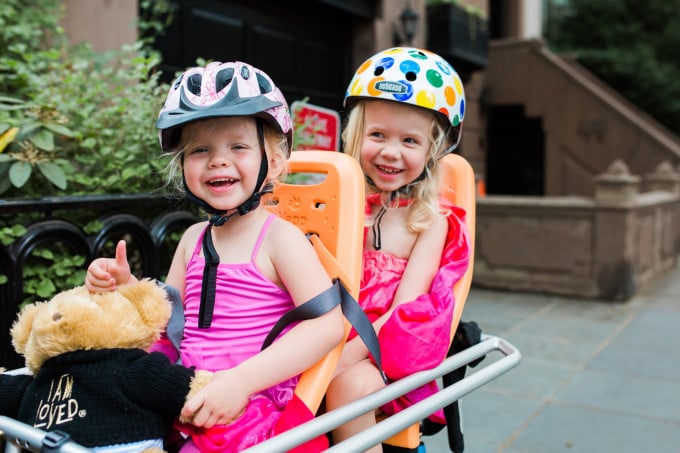 Kim: I’m at home during the day and my hope is to be a power mom and take all three kids around on the bike. It’s definitely a new, exciting thing for us.

We love going to the Brooklyn Waterfront in Dumbo. Riding in Prospect Park is magical, because you don’t have to worry about cars or traffic. The kids always direct me — “Let’s go into the woods!” — and we’ll turn down a winding path with the wind in our hair. Having the bike opens up the city in a way that we wouldn’t get to experience otherwise. 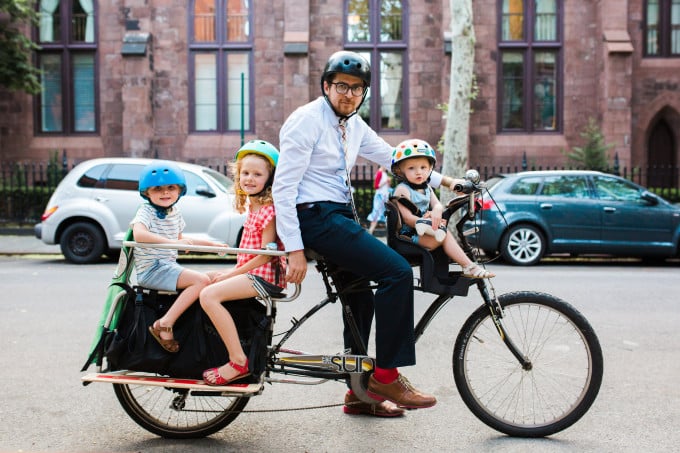 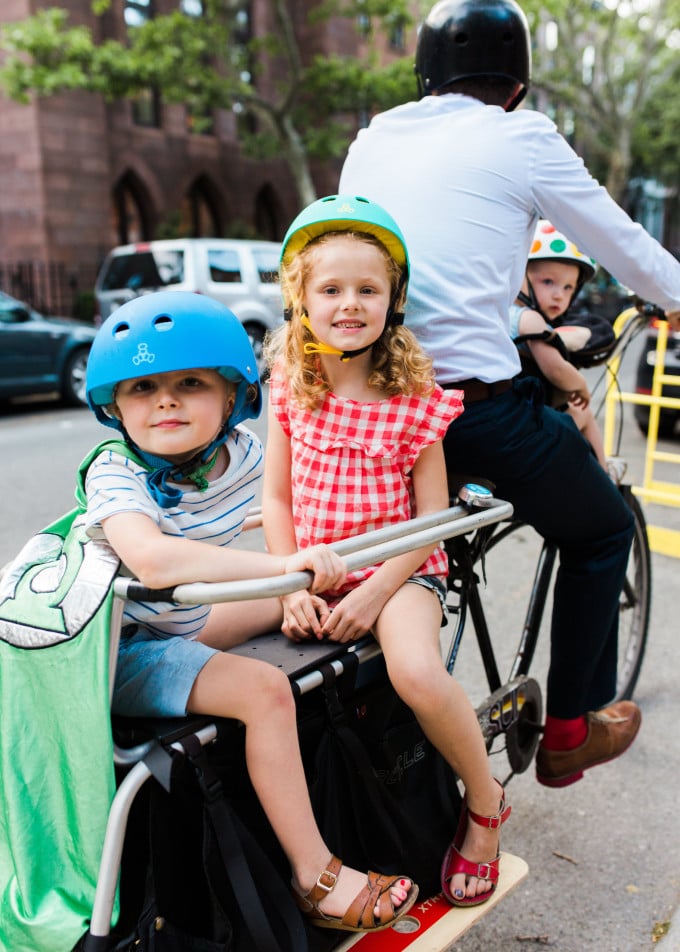 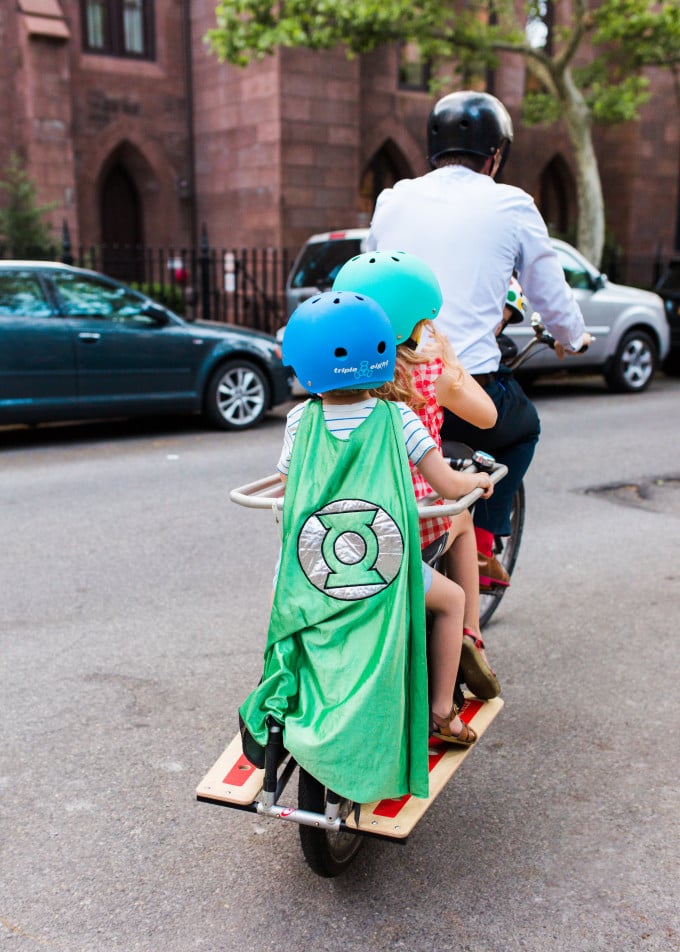 Brian: The bike’s instructions said it would take two to four hours to build, so one night when my wife Linsey was out, I decided to surprise her. Of course it took closer to 10 hours over two days, so she came home to a living room that had been converted into a bike shop… let’s just say I’ve given her much better surprises in our 10 years together. But she has forgiven me and now she loves it.

We love riding to parks and cruising the streets of Red Hook. Also not gonna lie, we spend a fair amount of time at IKEA — the parks out back are pretty awesome, not to mention the 99-cent breakfast and meatballs.

Basically everything kids do in cars — including fighting with siblings — they’ll do on the bike. Ivy has taken to reading on the bike lately.

It’s my dream to ride our whole family around. We tried it once, but Linsey cut the ride short because she was nervous I’d crash. Not sure how I will coax her back on there, but I’m hopeful it will happen again.

We recently took a family vacation to Amsterdam. Bike hitchhiking is a thing there, with people sitting on the rear racks of bicycles. I’ve thought about offering rides to people headed to Manhattan after I drop my kids off at school. Maybe we could start that here.

The bikes are so inspiring! I would love to do something similar when Toby and Anton get a little bigger. Even when they learn to ride their own bikes, we will still use my bike like a car, for long rides and commuting, so it would be awesome to figure out a new set-up like these. Thank you so much!

(Photos by Nicki Sebastian for Cup of Jo.)