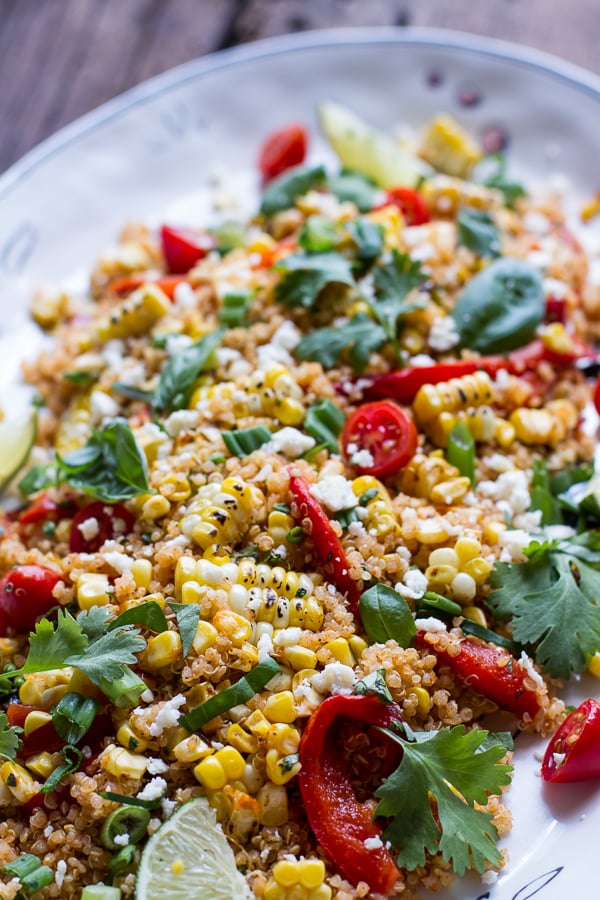 Today, we’re continuing our month of summer favorites with this corn-and-quinoa salad, inspired by grilled Mexican street corn. How amazing would this be to serve as a side, or even on its own? The wonderful Tieghan from Half Baked Harvest shows us how…

Grilled Corn Salad
By Tieghan Gerard of Half Baked Harvest

This salad is so simple and its Mexican flavors make it one you will crave every week this summer. It’s perfect to keep on hand for an easy lunch, light dinner or side, but I think it’s especially great for cookouts. People really love the flavors and it is a dish that almost everyone can eat (if you leave out the optional bacon). Plus, it happens to be pretty healthy, so there is that bonus too! As a double bonus, you don’t even have to heat up your kitchen to make it. 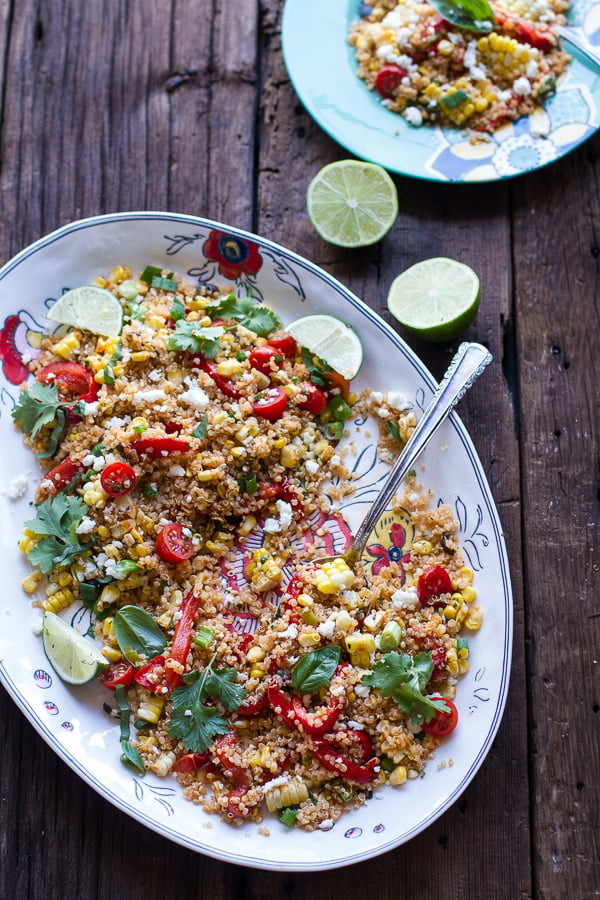 Prepare quinoa according to directions, which will most likely call for 1 cup of liquid.

While the quinoa is cooking, preheat the grill to the highest setting. Remove the husk from each ear of corn. Brush the corn with olive oil and season with salt and pepper. Wrap the corn in one layer of aluminum foil. Grill for about 5 minutes on each “side” — rotating corn 4 to 5 times during grilling. At the same time, also place the red peppers and jalapeño peppers on the grill. Lightly charr the peppers on all sides. Remove from the grill and allow to cool.

Meanwhile combine 2 tablespoons cilantro, smoked paprika, chile powder, salt and pepper. In another bowl add the 3 tablespoons butter and half the seasoning mixture. Once the corn is finished brush with just enough of the butter to coat all around the it. Allow the corn to cool and then, slice off the cob using a sharp knife. Slice the peppers as well and add everything to a big bowl.

Next add the warm quinoa to the bowl, along with the remaining seasonings, 1/4 cup fresh cilantro, basil, green onions, tomatoes and 2 tablespoons olive oil. Toss well. Add the bacon if using and then the cotija cheese, toss again and serve warm or at room temperature. 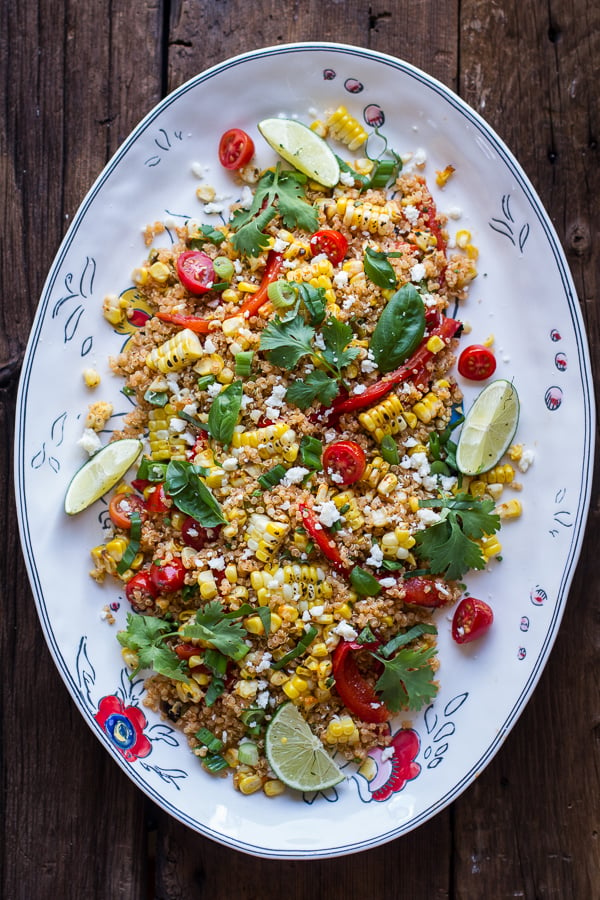 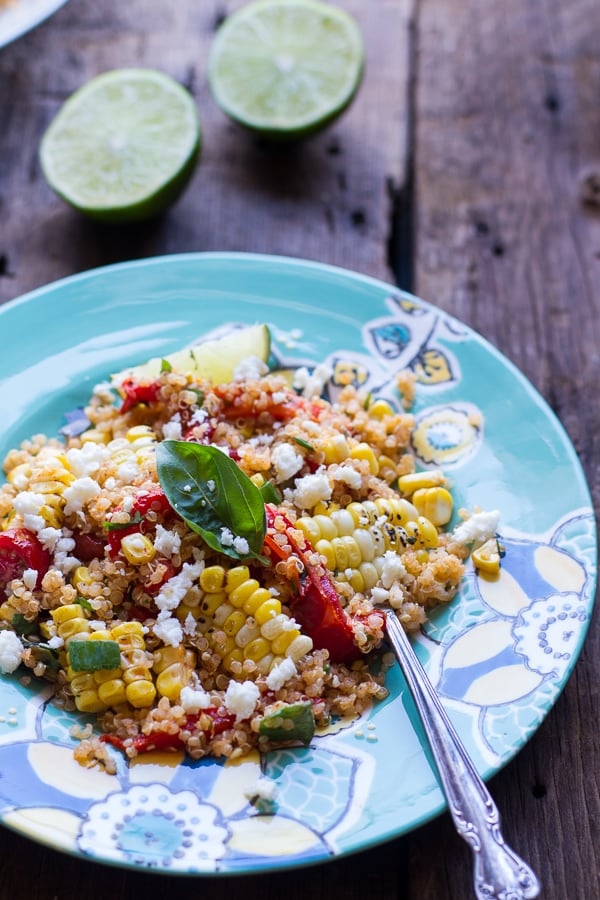 Thank you so much, Tieghan!

P.S. More recipes, including the best guacamole and corn on the cob.

(Recipe and photos by Tieghan Gerard. This series is edited by Caroline Donofrio.)

Can you make this a day ahead (having a big crowd and don’t want to be crazy cooking everything the day they come)?

Or will it be mushy if made ahead?

This says tsp for the spices in the recipe list but tablespoons in the actual directions?

I made this salad for dinner last night. It is so good!!! I can’t stop eating it. Thanks for sharing the recipe!

Making this ASAP. It looks so good!! Thanks for sharing.

Any tips if you don’t have a grill?

Oh wow! Now THIS is a perfect summer meal! I will be using this recipe shortly! Thanks!!

Yum, I love corn and this dish looks incredibly healthy and delicious. I know what I’ll be trying this weekend…

I’m a fashion blogger in NYC. To follow my adventures featuring the best of NYC’s fashion and food, check out sustenanceandstyle.com. Always looking to collaborate with new bloggers, so contact me! See you there xx

Well, at least I know our summer food game is au courant…my family has had this and tomato sandwiches on an endless cycle this past month. It’s so good that we aren’t in the least tired of it! There’s nothing like a good char on fresh corn…you can even do it in an iron skillet and let it caramel use a bit…soooooo good!

i looove grilled corn, especially in the summer, will definitely be trying this soon!

So good! Coating the corn with butter + seasoning sounds yummy. I have to try this.

That would make such a yummy office lunch!

Oh heavens, this looks delicious. They don’t eat corn here in France! (They think it is feed for cows!?!) Fresh corn is an exquisite thing …

This looks so yummy! I always look forward to recipe posts ;)

This looks amazing! It’s perfect a perfect summer dish.
Thanks!

I make something very similar to this. If I am in a rush and no time to grill the corn, I use Trader Joe’s Roasted Corn and heat it quickly in a pan with a bit of oil and chopped onion while prepping everything else.

I honestly think I’m going to be making this for dinner tonight. Looks so unbelievably tasty! :) You grilled the corn to perfection xo
http://www.GlossyFinds.com

What a fun, festive summer side dish! I love food that is both nourishing and beautiful. I will definitely be making this.
Happy Summer!
xx Lane

Making this for dinner!

Danielle | D is for Dreamer

I love quinoa and corn, so I will try this salad very soon!

This looks amazing! Thanks for sharing the recipe. I love corn!

http://trendkeeper.me .. Cut your OWN hair!

I make a version of the salad all the time — and add chipotle paste for a spicy kick (I wouldn’t add basil, personally). Really good with chopped avocado added in, too. A good tip for perfect quinoa is to spread cooked quinoa on parchment paper-lined baking tray to cool. Gets rid of the excess water, and brings it to the perfect temperature quickly.

Oh man! I’m always looking for lunches that we can make a batch of and eat through the week, and this looks like such a winner! Last summer I made a great summer succotash salad, but I love that this one has quinoa to bulk it up.
(https://girlnamedallyn.wordpress.com/2014/08/12/summer-succotash-salad/)