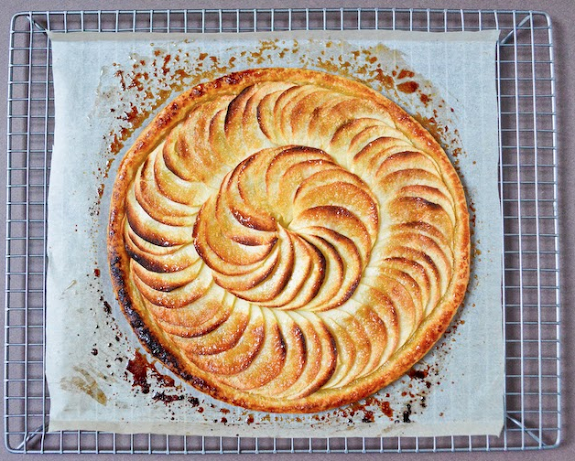 What’s better than an apple tart? A French apple tart! Today, Clotilde from Chocolate & Zucchini shows us how to bake this classic, elegant dessert…

I would argue that the most elegant kind of apple tart made in France is the tarte fine, a tart that is assembled on a thin disk of puff pastry, topped with a layer of thinly sliced apples. The keyword here is thin, as this format produces a unique sensation when you eat each bite, all crackly crust and soft apples.

A tarte fine has no raised borders, so it can be baked on any baking sheet—no tart pan required!—and because it’s such a simple tart to make, it frees you up to try your hand at puff pastry, or at least a simplified version that’s much easier. It is both an understated and completely wowing dessert that every baker should have in their repertoire, French or no. 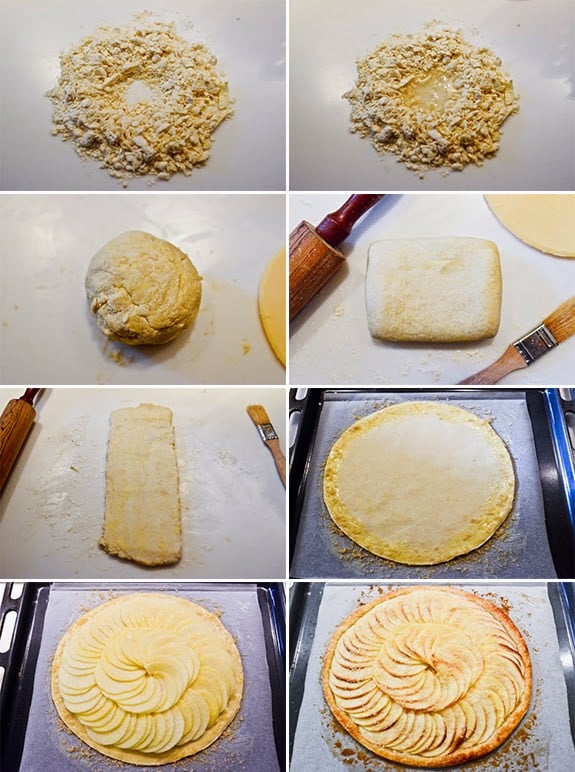 Roll out the puff pastry on a lightly floured work surface until you can cut out a 10-inch circle using an upturned cake pan or plate as a template.

Transfer the pastry circle cautiously to the prepared sheet, placing it exactly on top of the buttered and sugared area. Arrange the apple slices in an overlapping pattern on top of the pastry, starting from the outside and leaving a 1.5-cm (1/2-inch) margin. Brush the margin and the apples with the remaining butter, and sprinkle with a touch of salt.

Insert into the oven and bake for 30 minutes, until the apple slices feel soft when pierced with the tip of a knife.

Sprinkle with the remaining sugar and place under the broiler for 2 minutes, watching closely, until the sugar is caramelized.

Let cool and serve, slightly warm or at room temperature.

Place flour, butter and salt in a medium mixing bowl. Using a pastry blender or a fork, cut the butter into the flour, stopping when the mixture looks crumbly but even, with the average piece of butter about the size of a pea. Turn out onto a clean (preferably cool) work surface, and form a well in the center.

Pour ice-cold water into the well and gradually work it into the flour mixture—I like to use a bench scraper, but a wooden spoon will do fine. Knead lightly just enough that the dough comes together into a ball (do not overwork it) and shape into a rough square. There will still be chunks of butter visible in the dough.

Lightly flour your work surface. Using a lightly floured rolling pin, roll the dough into a long rectangle, about 10 inches in length. Add more flour as needed underneath to prevent sticking. Dust the top of the dough with a pastry brush to remove excess flour, and fold the dough in three so the top and bottom overlap, dusting it again after the first fold (the idea is to avoid trapping in too much flour every time the dough is folded).

After the last fold, tap the top and sides of the dough with the rolling pin to give it an even, squarish shape. Put on a plate, cover, and refrigerate at least an hour before using. 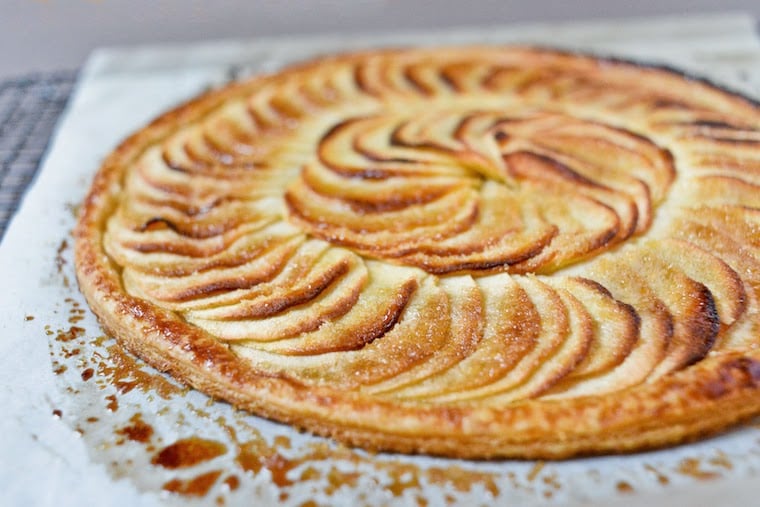 Thank you so much, Clotilde!

(Photos and recipe courtesy of Clotilde Dusoulier. Thanks to Caroline Donofrio for helping with this series)

Just made this and oh man we all just want more! So good!!

@Christa: I’m so pleased that you enjoy the recipe, thank you very much for reporting back!

– I would argue that the most elegant kind of apple tart made in France is … 1applewatch.blogspot.de

I have made this tart twice in the past two weeks, with apples from a local orchard, and I have to say it is incredibly easy, fantastically delicious, and looks like you spent hours on it. I will basically be making this every week! :)

I have to say this French version looks more appealing than American pie! Can’t wait to try. Happy pomme eating!

Re: the kind of apples, ideally you would use two different kinds for the best flavor balance, and pick apples that retain their shape when cooked. You could use Golden Delicious + Granny Smith, for instance, but I recommend you seek out local, lesser-known varieties from a farmers market if you have access to one.

Also looking for tips on cutting the apples uniformly. Oh and what types of apples would be best to use? Can’t wait to give this a shot this weekend!!

I think I might have to make this for this Sunday’s roast…tis the season I guess! Thank you for sharing.

For Karo Marie and amybigsis : to get those thin, uniform slices, I recommend using a mandolin slicer. This is the model I have, which I love and use all the time, to slice vegetables too. It makes really pretty radish confetti! :)

They all look amazing, but I would choose between NYC or Greece! We are actually headed to the beach for two weeks and I cannot wait!!

laura, yes! haha i was just emailing with her yesterday about it. we got a little off schedule but another one should be coming up v soon!

Random question off-topic: Are you still doing the Emily McDowell question/illustration series? I really enjoyed it! :)

Yes, I agree with Karo on the apple cutting tips! I will be making this…..when the kids are older :)

What a beautiful dessert!! And looks so yummy…

Thanks for sharing this recipe. This looks amazing. Great timing for apple picking season.

Reply
Somebody from Somewhere

This looks fantastic! I’m going to make it for my bosses going away party!

French tarts are the best! Never too sweet but always just buttery enough. And so pretty, too :)

Looks so beautiful. Definitely one to make on a rainy afternoon.

Looks excellent! Does she have any tips on how to cut the apples uniformly?
HandlewithKaro

This looks SO good! Bring on these fall recipes! I’m ready! :)

This looks amazing!! And soo simple!