What Kind of Accent Do You Have? 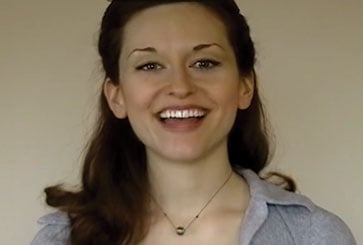 What kind of accent do you have? While growing up in Michigan, my brother, sister and I picked up slight Michigan accents. We’d say things like “maahm” instead of “mom,” and “caehr” instead of “car,” and “Bab” instead of “Bob.” After living in New York for twelve years, I’ve basically lost it, but sometimes when I drink too much wine, it can randomly bust out again. Yes, Michigan!

George Mason University collects speech samples from around the world, and everyone has to read this paragraph: “Please call Stella. Ask her to bring these things with her from the store: Six spoons of fresh snow peas, five thick slabs of blue cheese, and maybe a snack for her brother Bob. We also need a small plastic snake and a big toy frog for the kids. She can scoop these things into three red bags, and we will go meet her Wednesday at the train station.”

Have you taken the fascinating dialect quiz that has spread like wildfire online? What answer did you get? (It pinpointed that I was from Michigan.) And in the video above, actress Amy Walker does 24 different accents (some are better than others). The California one made me laugh out loud.

What kind of accent do you have?

P.S. What British people say versus what they really mean, and Toby in conversation.

Although my native language is Russian, people say they can’t place my accent. Some say I could probably be from Britain

I’ve spent half my life in one state, the other half in another. The quiz picked areas in between them, not bad.

Texas has definitely messed with some of my mannerisms and speech: I say y’all now, my accent is pretty neutral though I do say some things strangely, for some words I have various pronounciations of, and I leave out the ‘u’ in words now.

Ex: Before I would go with colour instead of color, the-ate-er instead of thete-er for theater, etc.

Yeah, she definitely missed the Toronto accent. I’m Canadian and have been all over the country and never met someone who talks like that. People from Eastern Canada definitely have an accent, but it’s much more subtle.

Native New Yorker. The Dialect Quiz got me spot on

Wow that’s really impressive! I never realized there was much of a difference between Seattle and LA accents (I live near Seattle). I think the only one I can object to is the Torontonian one; never heard someone from TO talk like that.

That video made me cringe. The Charleston one was so awful – she needs to listen to the This American Life segment about how real Southerners talk (http://www.thisamericanlife.org/radio-archives/episode/138/The-Real-Thing?act=3), because right now she sounds like Foghorn Leghorn. Side note: I also grew up in Michigan and my Michigan accent only comes out when I drink. Ha!

I’ve always liked things like this, accents are fun! Being from SC and having lived in Charleston for several years, her Charleston accent was totally incorrect. You’ll still find some older folks who have the drawl, but no-one under 60 talks that way anymore. Contrary to what some people think, it’s not “Gone With the Wind” down here. This was very entertaining, though!

Her Toronto needs some serious work…

I was born and raised in New Jersey…I never thought I had an accent until I went to college at NYU, when everyone could immediately tell I was from North Jersey! Words like coffee (“caw-fee”), dog (“dawg”), talk (“tawk”) give it away.

I’ve lived in some of these places and her accents are a little overdone.

love it! I’m from Indiana, which maybe comes out similar to Michigan but a bit softer and more nasal? Apparently I’ve also lost it after years living in Saudi Arabia.

Good grief, Torontonians don’t sound like that! And we say Trawna, not Tor-on-to. Jeez.

Well, her accents aren’t too bad–but Texas and Carolina weren’t too good. Heard a lot of both and she didn’t have enough drawl for them!

I took the test and it told me im from New York. Or my accent is from there.
which is what people usually guess when I speak anyway, so thats all good. :)

I’m a New Zealander living in New Zealand and it thinks I’m from New York!

That’s crazy! I got Chicago and I’m a Chicagoan:)

The quiz got me perfectly – it named NYC and even pinpointed the NJ city I was born in!

Being from Alberta, I think I most identified with her Seattle accent the most… Sorta close!

I’m Australian so the quiz didn’t really work for me. Maybe if I’d chosen the horribly Australian word “youse” in the first question the result may have been different, but I can’t stand that word! There were quite a few questions that I had to select “Other” as the answer as the word that I’d use wasn’t on the list ie. a Drive Through is what we call a liquor store that you well, drive through, but it wasn’t on the list!
I do, however, live in the San Francisco Bay Area and that’s where the quiz decided that my accent is from. I definitely don’t sound American though. In fact, to most people I probably don’t even sound Australian. In the two years that I’ve lived in the US I’ve maybe had 3 people correctly guess that I’m Australian. Most people guess that I’m English as the part of Australia that I’m from doesn’t have the over the top Aussie accent (like the ones in the video).
Actually, even though I’m Australian I always thought those horrible over the top Aussie accents (once again, like the ones from the video) were completely fictitious – until I moved to Sydney in my early 20s and discovered otherwise!

I find accents to be so fascinating. I grew up just outside of Chicago but have been in Kansas City (the land of no accent) for 11 years now. I thought my nasal-y dialect had pretty much left me but it sneaks out now and again.

In college, I lived in Montreal for the summer and while I was working with some kids at a church one asked me why I prayed to ‘Gad’ and everyone else prayed to ‘God.’ Whoops, sorry for messing up your theology, kiddo!

I love showing that accents video to my theater class! I love throwing them for a loop and asking them to perform a character or scene with an accent. Fun stuff!

Being from 1.5 hrs away from Toronto, we definitely don’t sound like that! We can definitely adopt that kind of an accent to mock ourselves but it’s not heard in everyday life.

Ashley Atkinson- I too always imagined Joanna’s voice being British! Though in my mind it was slight- as if it had worn off over time. …I think I have an overactive imagination.

As an Australian, I’m generally very scornful of other countries attempting our accent but the first one was pretty accurate (the second one was over the top but made me laugh).