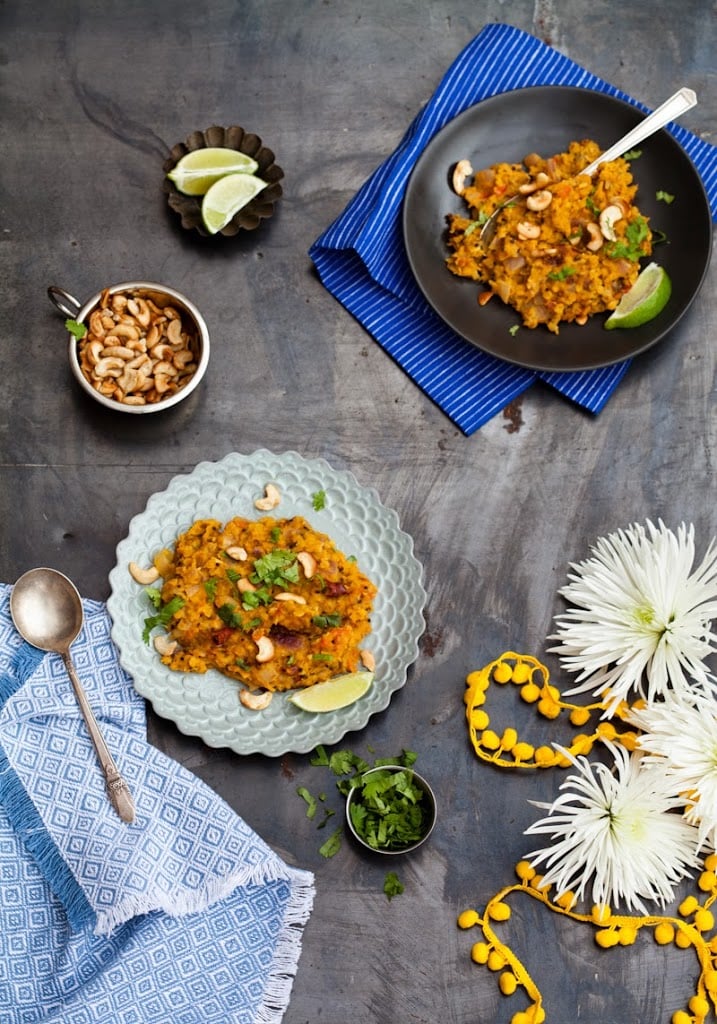 This month, we’re asking food bloggers to share one-dish meals, like skillet lasagna. Today, Leela of Tea Cup Tea is sharing a vegetarian Indian stew that you can whip up in 20 minutes with creamy coconut milk and toasted cashews. Delicious! Here’s how to make it… 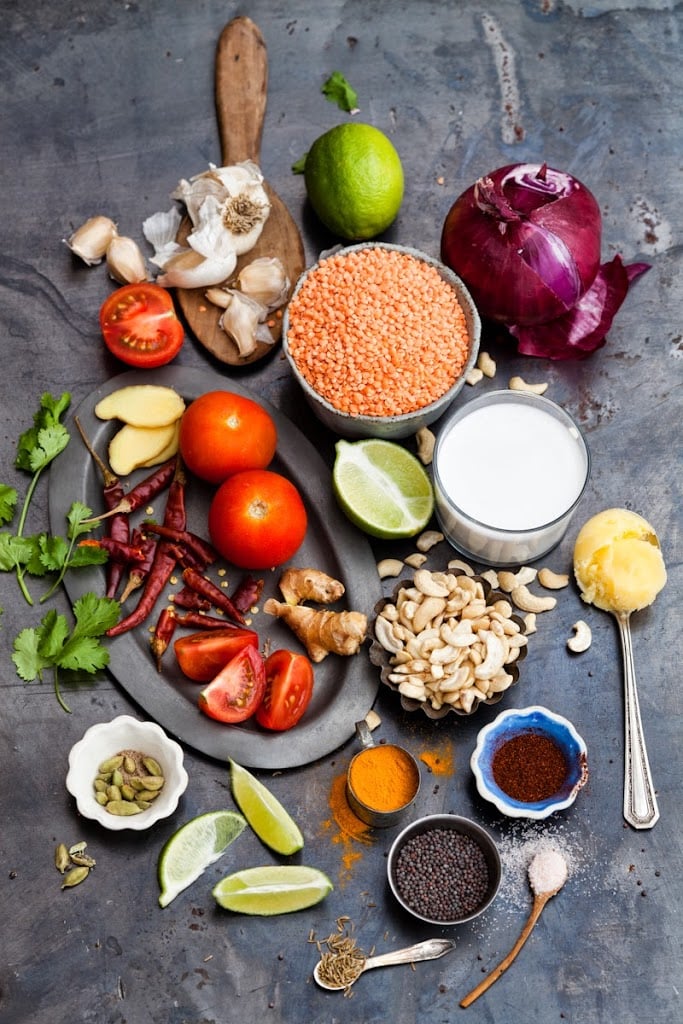 “Dahl” is a ubiquitous catch-all phrase for most any stew in India made from pulses. Every cook in India prepares her dahl with a slight variation mostly according to region, tradition and availability. From the addition of tamarind paste in Kerala to a splash of cream in the Punjab region in the North, I delighted in this nourishing dish almost every day while living in India a few years ago. It’s so comforting and always hits the spot, especially on cold days.

Once you gather all the spices and pantry staples, this version of dahl is easy to whip up in about 20 minutes. I love it because it’s incredibly flavorful and satisfying, and absolutely easy. When accompanied with some rice or a little flat bread and some garnishes such as fresh cilantro, toasted cashews or mango chutney, you’ve got an inexpensive, vegetarian main dish everyone will go gaga for. It’s a showstopper! My secret weapon, which an innkeeper in Panaji, Goa, showed me with her dahl, is to enrich the whole thing with coconut milk. This subtly creamy, decadent touch makes the dish beyond delicious.

What to do:
Heat ghee on medium heat and add spices and onion, stirring continuously for about five minutes. Add garlic and ginger and cook for another one or two minutes. Then, add lentils, tomatoes and liquids. Crank up the heat to medium-high and stir continuously, until all liquid is absorbed, about 15 to 20 minutes. Serve hot with rice, naan or a crusty roll. Garnish with toasted cashews and cilantro. (I love extra lime wedges for squeezing on top, as well as extra salt and pepper.) 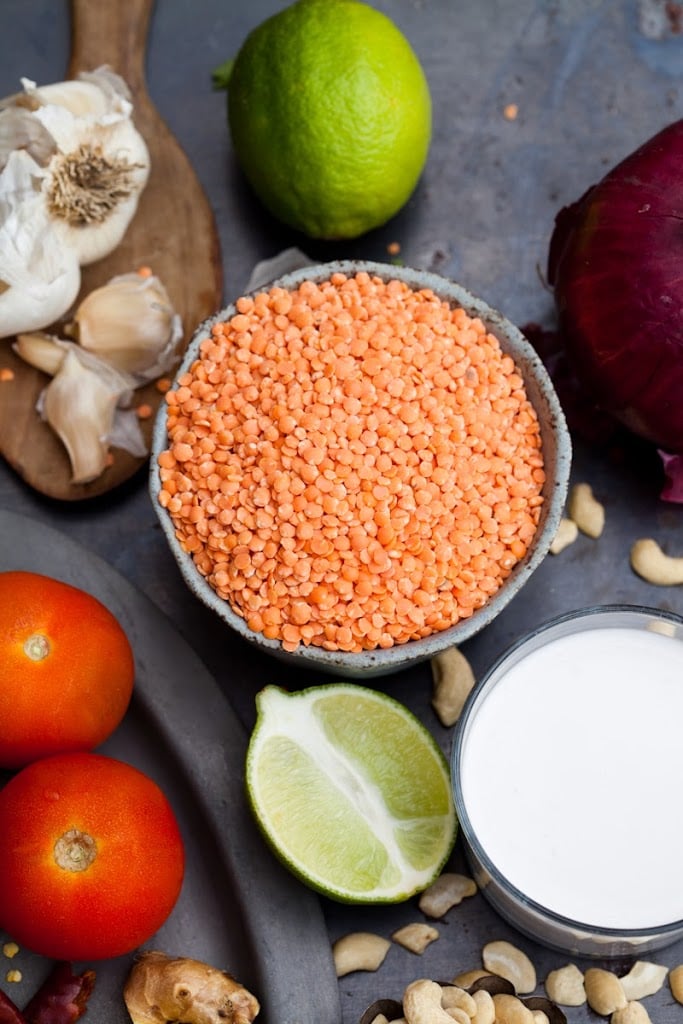 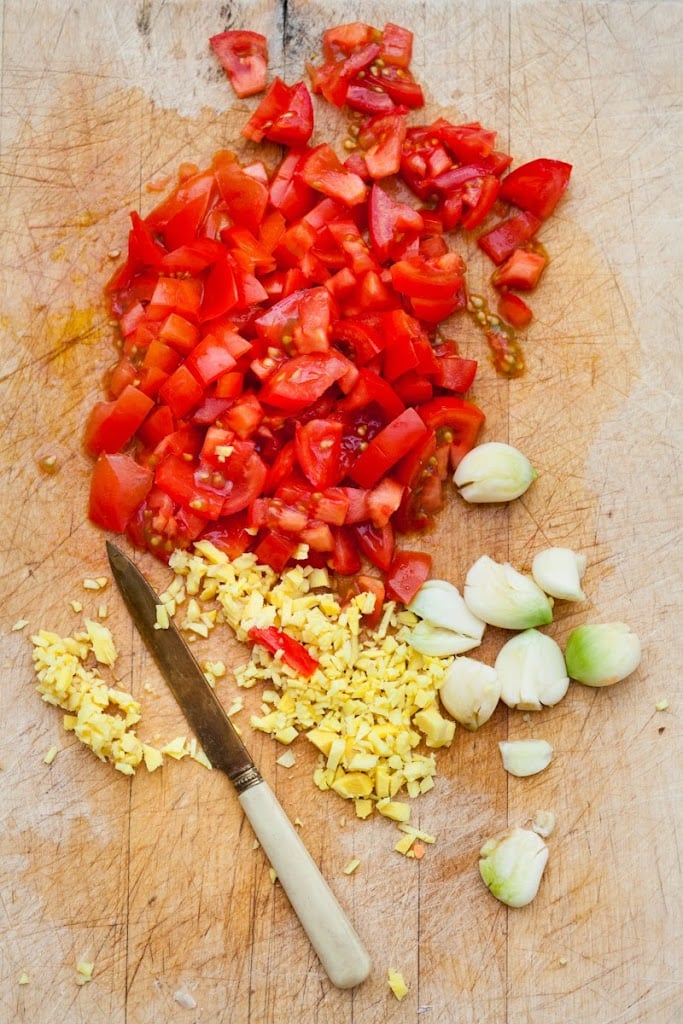 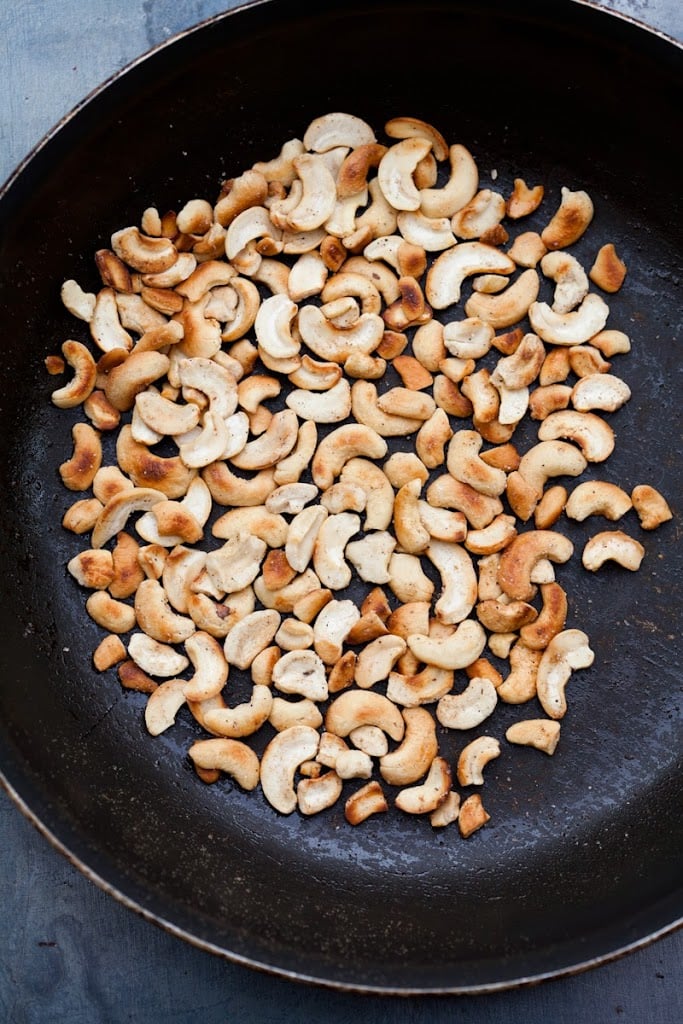 Thank you so much, Leela!

(Photos and recipe by Leela Cyd of Tea Cup Tea. Thanks to Shoko for helping with this series.)

Great information.. Thanks for sharing

Get your Summer Collections with over 50% discounts now!!! http://www.shopclues.com/index.php?dispatch=products.search&company_id=69063&search_performed=Y

I was kind of excited to see how few spices are needed for this recipe. The only thing I don’t already have in my cupboard is the orange lentils (I have black, green, brown and yellow). I’m always looking for good bean and lentil dishes because I noticed that after I started eating meat again, it’s so easy to center every meal around it and I’ve stopped cooking without it. For people that don’t have extensive spice collections, look for shops that sell bulk spices (many mainstream groceries do this now but they might be in the “organic” or healthy section of the store). Bulk spices are usually cheaper by the ounce, and you can purchase small amounts if you don’t use them regularly.

Nom nom nom I must try this! Thanks for sharing!

Okay, so I just went ahead and made this to eat for supper tonight, with the thought that it might be good to let it sit for awhile and allow the flavors to mingle. Plus, I was really itching to get started.

(To above poster – no there is no need to soak the lentils. They cook fully from dry in 20 minutes.)

This is delicious(!) but it did take more like an hour to make, between all the chopping, mincing, and measuring, and the various cooking steps. Oh, well I did make the ghee myself which added a few minutes to the cooking time. A couple notes – it came out CRAZY hot and I’m really not a wimp when it comes to spicy foods. I think I might have used the wrong dried chilies – didn’t pay attention to the photo and the recipe doesn’t say which kind of pepper to use, so I got the only one at my store which was a “product of India.” It also says it’s the world’s hottest pepper… so I used fewer than called for and it’s still extremely hot. I also used “lite” coconut milk, and I think that was a mistake and may contribute to the heat. It’s essentially coconuts thinned twice, because rather than being coconut and water as is regular coconut milk, it’s coconut milk and water and guar gum…. So my plan is to pick up a can of regular coconut milk and when I reheat this later, add a small amount to the pan to help mellow the heat. I also think that as this sits throughout the day the lentils (and small amount of finely diced potato I added) will mellow the flavor.

I plan to serve over Trader Joe’s jasmine rice… it comes par-cooked frozen, microwaves in three minutes, and is surprisingly delicious, with a great texture.

This looks delicious and Í am making it for supper tonight. I often intend to make recipes I find on blogs and then never get around to it, but yesterday I actually went out and purchased all necessary ingredients, so I will definitely be making it! I assumed I’d be running around town, at the very least going to our food co-op to try to find the the lentils, dried chilies and some of the spices (no international grocery nearby in small-town New England) but I was surprised to find them all at the regular chain supermarket. The orange lentils were only available in a bag which included curry packet – it was really a “kit” for a lentil curry – but no matter, I can just keep the seasoning packet for something else. I did have to lay in about $35 worth of spices I didn’t already own, but they’ll last for a long time. The only thing different I plan to do is add one small potato, finely diced.

Looks tasty. Do you need to soak the lentils overnight?

I love this recipe. I’m so lucky to live in Durban, South Africa (which has a large Indian population) so we can get every imaginable spice at wonderfully low prices. AND I’m a veg so this is definitely going on my weekly meal list. Thank you Leela :)

It looks delicious. I’ve been wanting to make a yummy Indian food recipe with lentils.

This is SO great! My husband is Indian, and this might finally be a recipe I can impress him with (not to mention my MiL – that would be something!). Thank you!

Hi Joanna,
My name is Ana Ribeiro, I am a brazilian food blogger and would love to send you a recipe! Please let me know if you would be interested. Here is the link to my blog: http://pessoasesabores.wordpress.com/ and my email address is: pessoasesabores@gmail.com
I blog in portuguese, which is my maternal language, but I am actually planning on making an english version of it! Hope to hear from you soon! xoxo Ana

this looks fabulous! good timing, one of our goals this year is to learn to cook more indian food (last year we learned to cook more asian food, so fun!).

since you’re doing one-skillet recipes, i would LOVE to see a good paella :)

I think Pooja is right- that is masoor daal

Love the flavors you have bursting here! Dahl is one of my absolute favorite dishes. Homemade is the best way, and my mom’s is my #1. It’s so tasty pairing it with rice or even naan!

I am obsessed with Indian food and cook it once a week. I am vegetarian so I am so happy that the recipe is. It looks amazing and will definitely try it for one of next week’s dinner. Thanks!!

Ohhhhhhh, I cannot stop looking at the second picture in this post!! Can I purchase it as a print?

Oh my gosh, this looks so yummy! I have been obsessed with my Madhur Jaffrey Indian cookbook recently and just discovered an amazing spice market not too far from my house. Definitely trying this!

oh i am excited for this one! my family has been very into lentils lately, and this is exactly what we need to jazz them up a bit:)