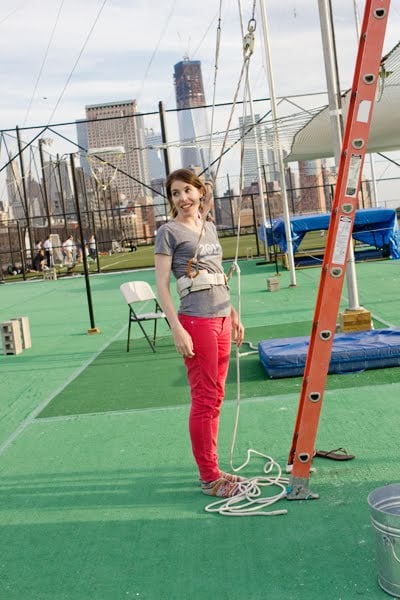 So. Last Saturday, Alex and I took a trapeze class, and it was wild…

So. Last Saturday, Alex and I took a trapeze class, and it was wild… 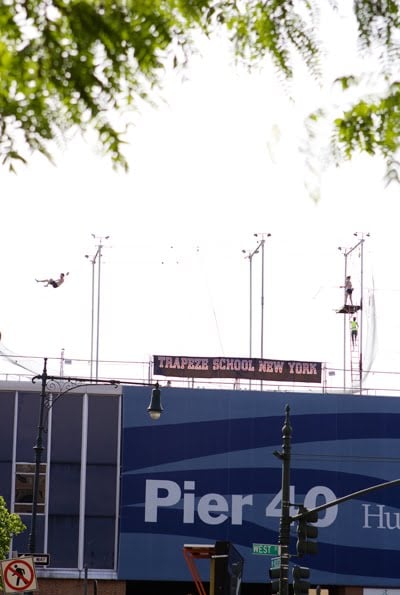 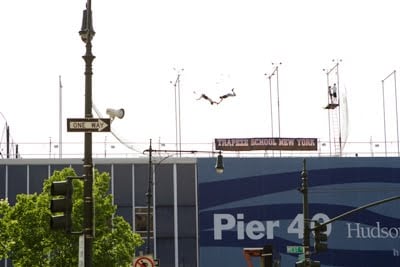 We had signed up months earlier, during an alcohol-fueled moment of bravery. “Let’s do it!” I suggested, after a boozy dinner one night. “Yes!” agreed Alex, momentarily forgetting his pathological fear of heights. So we registered for the class, joking that it would like an episode The Bachelor, where a couple will do scary things (climb bridges, go spelunking) on their first date and get so invigorated by the end that their endorphins are flowing and they’re suddenly madly in love. 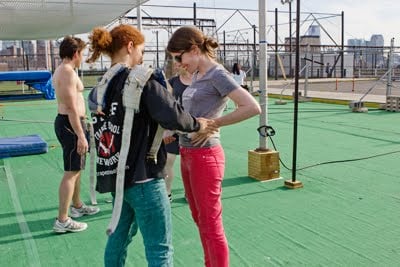 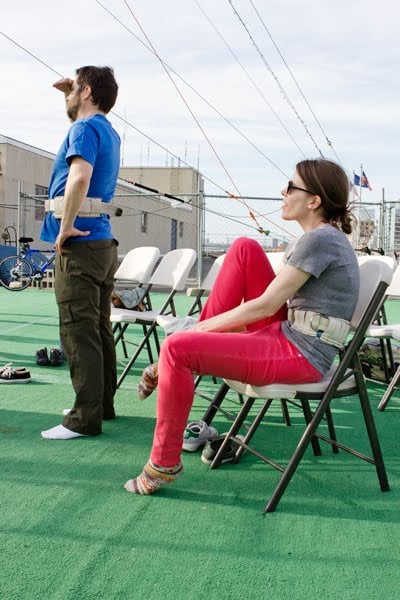 So, months passed, and finally we found ourselves at the New York Trapeze School last Saturday evening, with our friend Rebecca, who had kindly agreed to take a few photos. Note that the school is on the roof of a building, which makes the trapeze itself feel even higher! 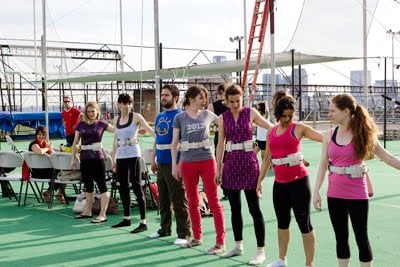 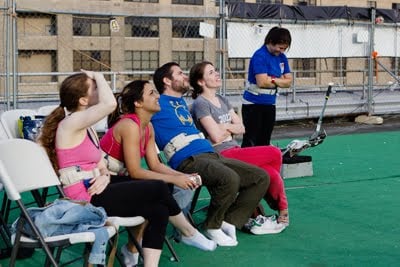 We took off our shoes and put harnesses snugly around our waists. Then we learned how to reach for the trapeze one hand at a time. The other students were two former gymnasts and five friends from Montreal, who were on a weekend bachelorette party. 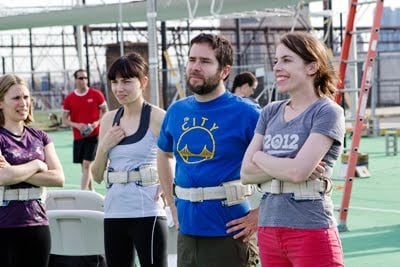 Alex hardly said a word. He mostly just looked like he was going to throw up. I asked him if he was scared, and he said no, but I knew better. Heights are his big phobia–as much as elevators and subways are mine. Seriously, what a champ. 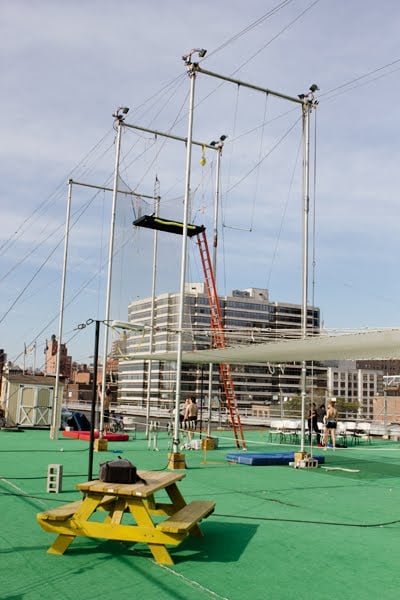 Then it was go time. The platform suddenly looked very high. 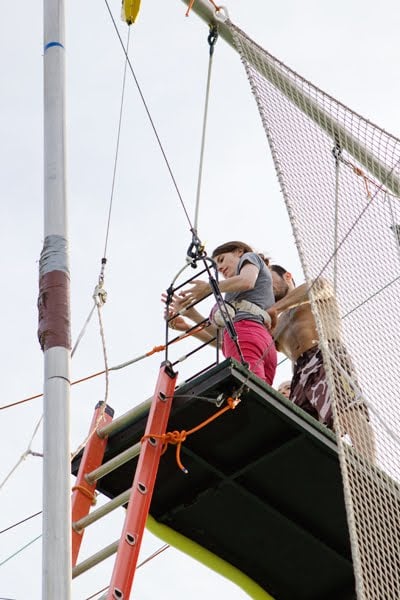 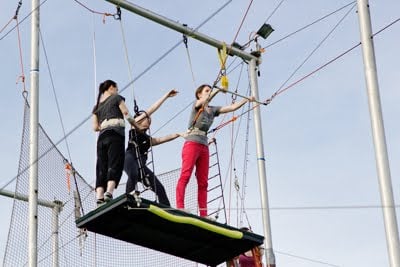 Up I went! You climb a steep ladder, pull yourself onto the platform and put chalk on your hands to keep them from sweating. Then you put your hands on the trapeze, while an instructor holds you back. I was surprised by how heavy the trapeze felt–it almost pulled you off the platform. 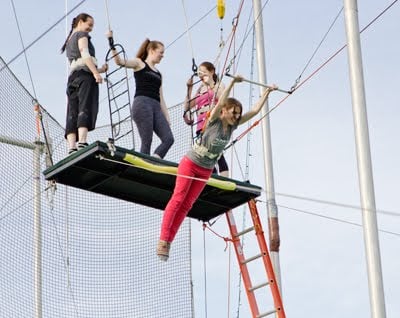 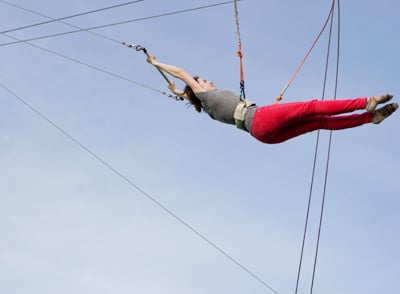 And then I…jumped! When you fly through the air, you’re supposed to curl your legs against your chest, so that they’ll naturally swing under the bar, allowing you to hang upside down from your legs. This, above, is the highest my legs went:) 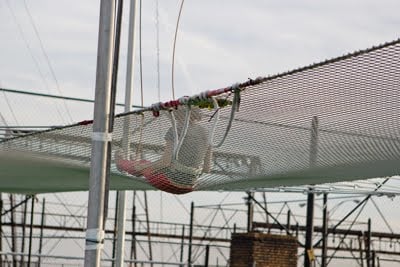 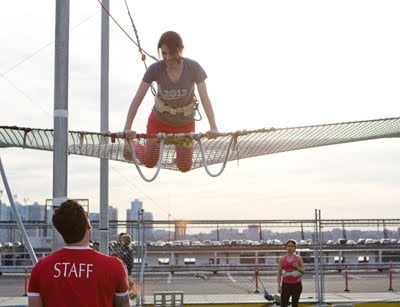 Then the instructor yells, “Hep!” and you drop the bar and sit down, so you land safely in the net. It was invigorating and terrifying at the same time. 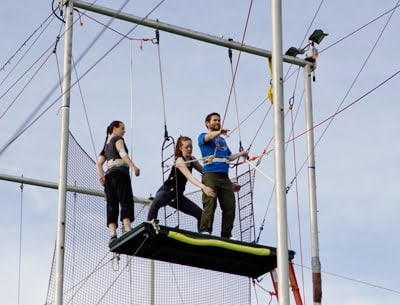 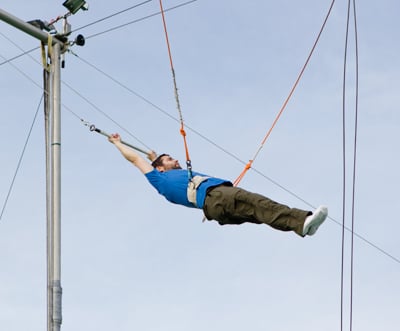 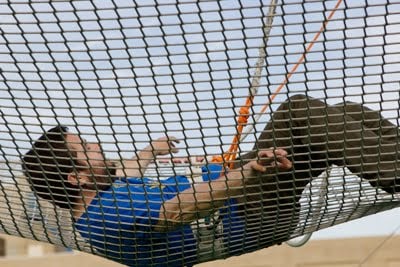 Next it was Alex’s turn. He climbed the ladder slowly, and on the platform, I could see his face had turned white as a ghost. I wondered if he’d climb back down–trust me when I say that heights are literally his number one fear. But then he JUMPED! YAY! 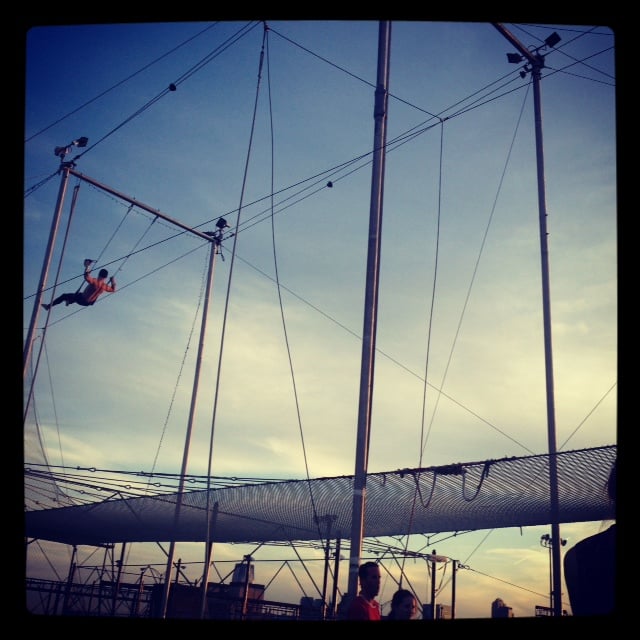 Everyone went a few times. The other students were doing knee hangs and flips. “I feel like I’m flying!” one girl said, “It’s the best feeling!” But Alex and I just continued to swing out and then drop. Still, we were proud of ourselves for trying! 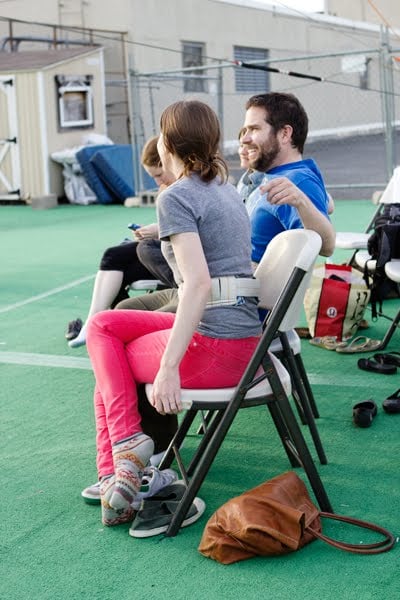 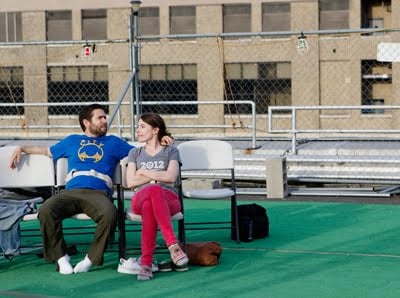 In the end, Alex and I sat together, laughing about how we were wusses and couldn’t do all the tricks. We bonded not over conquering our fears like Bachelor contestants, but instead over being equally lame. In its own weird way, it was a great and hilarious date night. And we also realized a new thing we shared: a hatred for trapeze. :)

Would you take a trapeze class? Yes, or no way? Seriously, I would highly recommend it, especially if you’re braver than we are:) A trapeze class would make an amazing for a birthday present or thrilling date. And the evening class is particularly gorgeous, since you’re flying through the sky during the sunset. xoxo

(Photos by our friend Rebecca Baust from The Daily Muse–Thanks, Rebecca!)

I am a new reader and just happened upon this post. But I had to comment because I did this last weekend for a bachelorette party and then I just saw that you did this almost exaclty a year ago to the day! I was terrified, but super proud of myself for getting up the courage to go not just once, but a second time. Sure some others did fancy tricks and swung across to the other instructor, but I was impressed with getting my knees over the bar!

Wow nice and good post this what i am looking for i well tell this to my friend .I will share it to tell .
Hope more of this ,
relaxation techniques

I did this too and LOVED it. I can’t believe how many tricks they teach you in the beginner class – hanging from your knees, doing a BACKFLIP, even jumping off into an instructor’s arms! It was such a blast and I would definitely do it again (if the price were a little cheaper)

I did this last Thursday and it was amazing! I would do it again and again. It felt like I was flying! I did a backwards sommersault and a catch with the instructor. Amazing! Thanks Joanna, (and S&TC memory)!

When I was young, there was this Japanese anime about a trapeze star that my sister and I really liked.

I used to be an elite trampolinist (oh yes, there’s such a sport), and I can’t wait to try trapezing out in Sydney. Might be the one thing that fills that intrinsic need to be crazy AND flip at the same time!

So you met montrealers, as a reader of the blog (and a montrealer myself) I wondered, since you seem to like food a lot, if you ad ever been to Montreal?

love love love that you did this! I would never be brave enough … ever ever ever

This looks like so much FUN! I’m going to look for a Trapeze School in The Netherlands right now. Thanks for sharing!

J think Joanna’s bag is from banana republic. I have the same one in yellow :)

great post! i love the last photo of you and alex, having conquered the trapeze as best you both could. what a great date to look back on and remember together!

you’re braver than me, well I think I’d attempt a class but hate being upside down so wouldn’t have flipped lol. At least you and Alex had some bonding time even if it was over being scared. Love your pants too lol.

sara, yes! he grew up outside san francisco. he loves the golden state warriors! he’s like their number one fan. :)

thank you for these sweet comments!!! you guys should try it — it’s insane. :):)

I do aerial silks and have tried static trapeze, and it scares me. I don’t know why. I have no problem hanging 10 feet in the air with just a piece of fabric wrapped around my ankles, but when I’m on a skinny little bar, I freak. I don’t think I’d be able to do flying trapeze. If I did, probably just what you did.

Looks super fun!!!! Is your husband from the SF Bay Area? I recognize the GS Warriors t-shirt :)

hahah, this is hilarious. I can totally see my husband and I being the same way and afterward bonding over the lameness :) love you guys!

Funny enough I signed up for one about a month ago! And now I’m getting nervous :) You inspired me! it looks like fun :)

We took a trapeze class here in Seattle! Super fun! But my fiance and I are both adrenaline junkies and it was pie compared to bungee jumping and skydiving. Glad you guys faced your fears – you feel like you can do anything afterwards, right? :) xo

oh my god, my hands are sweating! so funny. i can see a lot of toby in your expressions, especially the photo with your eyebrows raised! :)

I took a flying trapeze class at Trapeze Arts in Oakland, CA for my bachelorette party in March. :) It was SO much fun! It’s in a warehouse though, not on a roof. I did put my feet on the bar and completed a few catches, but I had a friend who preferred just to swing. The best part about it was that the instructors were so great and were totally cool with everyone’s varying levels of enthusiasm.

I do fear heights but if my Fiance or sons wanted me to join them, I would. I probably wouldn’t do fancy tricks just swing and drop. I never was good at School Gymnastics anyway. But I do like seeing other people ‘give it a try’.