Stinky Cheeses: How Brave Are You? 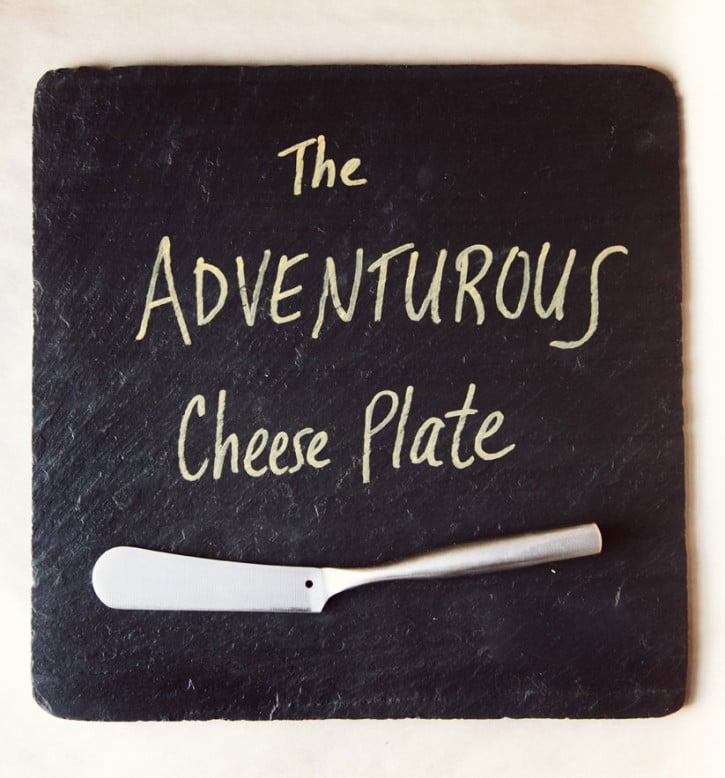 My sweets, a couple weeks ago, we figured out how to make the perfect cheese plate. But what about really those change-your-life strong cheeses? Well, Murray’s Cheese helped us put together a cheese plate for brave souls that will blow your mind (and stink up your living room). The only question is: Can you handle it? :) 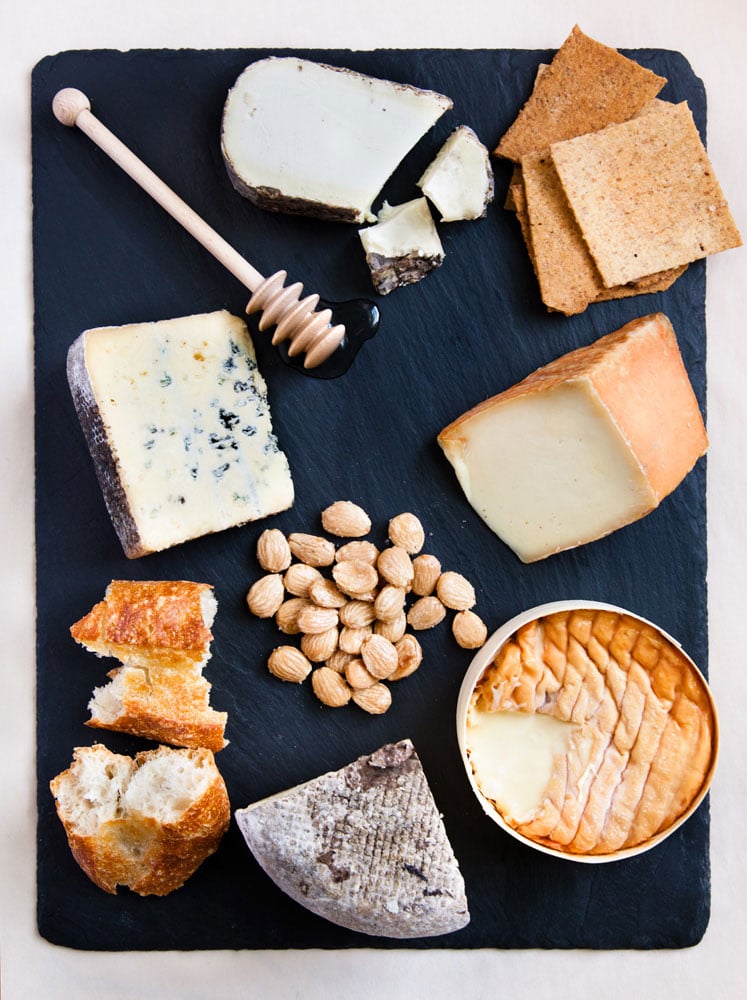 Overall rule of thumb: Typically it’s OK to eat the rind of any cheese, as long as you can handle the stronger flavor (exceptions, of course, are cloth-bound or wax rinds).

Monte Enebro. This quirky Spanish goat cheese is covered in ash and mold. The flavor is creamy and salty on the inside, and then gets spicy, damp and acidic as you get toward the rind. Its overall funny appearance is said to resemble the leg of a mule!

Quadrello di Bufala. This gamey cheese is made in northern Italy with water buffalo milk. Two SUPER cool brothers took over their father’s farm (their dad had started the farm in 1968 and tragically died the same year). They wanted to do more than just make mozzarella, so they created a bunch of different funky cheeses. This cheese is very barnyard-y; you can taste wet straw, a bit of stink and sweetness at the same time. Tangy, meaty, very rich. Washed in brine.

Epoisses. There are two ways to serve this runny cow’s milk cheese–cut it like a pizza or cut the top off and scoop it out with a spoon (or dip your bread in!). After four weeks of aging in France, this cheese is rinsed in French brandy–and once it crosses the pond, Murray’s washes it in brandy again in their cheese cave to kick up the intensity. Very strong, gooey, stinky. (In fact, it’s so stinky that there’s a rumor that it’s banned from French public transportation.) Like a salty pudding. Fun fact: Napoleon Bonaparte was a huge fan!

Pecorino Foglie de Noce. This raw sheep’s milk cheese is buried in barrels full of walnut leaves while it ages. You can taste the walnut flavor in the cheese, and the rind is grassy and herbaceous. Milky, nutty, sharp and very salty. Great with fresh grapes, since it’s so salty that you need that refreshing palate cleanser. (Fun fact: Did you know that the word “pecorino” doesn’t actually connote a specific cheese, but simply refers to any Italian sheep’s milk cheese?)

Caveman Blue. This blue cheese is made with raw cow’s milk in Oregon. (The Pacific Northwest is a big blue hotspot.) Really fruity and spicy, the flavor is right up front. Has nuances of beef and bacon and grass. Not for people who are timid about blue cheeses! The name “Caveman Blue” is a nod to the nearby town of Grant’s Pass, which is overlooked by a huge hulking statue of a caveman.

Yum! Thank you so much, Sydney and Murray’s! What do you think, my lovelies? Do you dare? How bold are you when it comes to cheeses? (I would love to serve this tray at a dinner party!)

(Photos by the amazing Jamie Beck for Cup of Jo)

Tags: cheese, photography, tutorial
102 COMMENTS
WRITE A COMMENT
Design
most popular
01
My Sister’s Home Makeover
02
What Are Your Top Three Books?
03
The Ultimate TV Guide (If You’re Looking for Something Great)
04
Catherine Newman’s House Is a Joyful Jumble of Books, Games and Cats
05
Behind the Scenes: Making a Magazine Cover
May We Suggest…
By Joanna Goddard
Design
The Coolest Birthday Candles
February 1, 2021

Thanks for sharing!
An interesting resource to learn about and buy cheeses is http://www.fromages.com If I recall right it was the subject of either a New York Times article or Wall Street Journal when it appeared on the Internet…

Thanks a lot for your post, i ‘ve got a bit different outlook at generic Levitra
Bernard

Looks like you guys also made use of some Brooklyn Slate!? Great work – a solid helping of cheese.

Oh dear, you’re probably not reading this anymore but I have the BESTEST suggestion. Cambozola. I always keep a little on hand when I have a hankering for something savory. None of my friends have liked it. But my 3 and 6 year old daughters can’t get enough. I refer to it as ‘stinky cheese’ and they know what I mean.

Stinky cheeses are my favorite!
My husband and I lived on Epoisses when traveling around France in 2009. We would dip torn pieces of baguette into it…it cost about 5 Euros at truck stops…so yummy!
Do u ever experience strange dreams after eating cheese? especially after eating ‘stinky cheese’.
I call them cheesy-mares!

S., haha, i love stinky bishop! good call. and alix, you guys have to get back together, you were so good together :)

I can smell it from here + I am on a break with cheese, just to get some space. This makes me want to get back together right now.

love the photo with the moving skirt!!! xoxo

Oh! I love cheese. :) Thanks for sharing!

Liz lemon would be so proud!

If you ever get the chance to visit this restaurant; http://www.st-patrick.it/ , I highly recommend it! :) Me and my husband live in Norway, but every year we visit the tiny city of Terracina, south of Rome. This restaurant is amazing, and amongst other delicious dishes, they make a perfect cheese plate with matching wines. You can order it both as a starter and as a main course, we had it as a main course, and it was a laaaarge platter with many, many different cheeses, everything from local freshly made mozzarella to stilton and more.

I am an Oregonian, and my faveorite blue is Rogue River Creamery’s Rogue River Blue
http://www.roguecreamery.com/pilot.asp?pg=RogueRiverBlue

yum!! the stinkier the better!!!

I love cheese, so I’d be willing to try this stinky cheese plate! :) I have to say, the moving photo reminds me of two things: 1)the photo in the movie “The Ring” or 2)the moving photos in the wizarding world of Harry Potter! :) It’s kinda freaky.

Reply
On A Day In November

Also, my mouth starts watering when I read this, haha! I LOVE cheese and I’m not afraid of the stinky ones either. I found a new cheese shop, so I’m planning on trying out loads of different ones soon. Great post, thanks for sharing :)

I’m sorry but those are weak sauce stinky cheeses… No Alsatian Munster? Stinking Bishop? Tomme de berger? If you can get past the noses on those guys, then you truly love stinky cheese.

and thanks for these incredible recommendations, i can’t wait to try more cheeses!!!! :) xoxo

franglaise, jamie is a genius at creating those moving images — they’re different from regular animated gifts, since they’re not just animated images, but a moment in a photograph. she has tons more on her blog, they are amazing!! :)

anonymous, the slate board is from murray’s. you can buy them in the store, and i bet if you called them, they could mail you one. it was awesome!!

Mmmm! Now I want to eat cheese!! I like some stinky cheeses but stay away from the moldy looking ones;) Thanks for sharing, will attempt a real cheese platter soon:)

I want a nice glass of red and some cheese right now! Great info and photos!