Things I Love in a Book 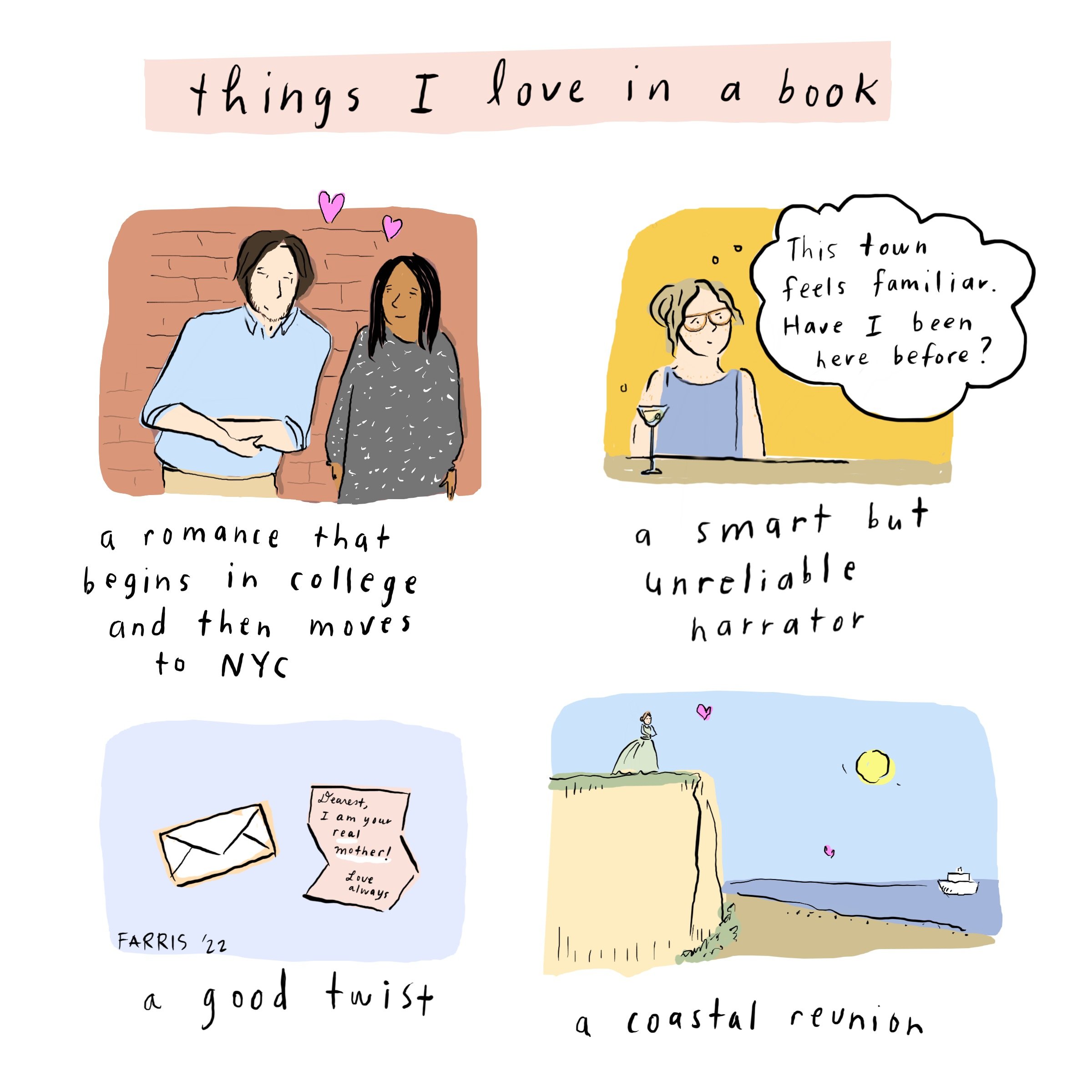 Plot twists get us every time. By the lovely Grace Farris.

Tags: comics
27 COMMENTS
WRITE A COMMENT
Array ( )
Relationships
most popular
01
Seeing My Body With Fresh Eyes
02
11 Wedding Dos and Don’ts
03
How to Write a Condolence Note
04
A Love Letter to My Anti-Anxiety Medication
05
How to Be a Better Listener
May We Suggest…
By Jessica Olien
Relationships
A Dating Chaperone
August 2, 2019

Can someone give an example of a good book with an unreliable narrator? Thanks!

yes!! um…gone girl was amazing in that way. the curious incident of the dog in the night-time. sorrow and bliss!

Good choices! Thanks. I’ll read both of them.

Whoops! I meant to say that I’ll read all 3 of these. Thank you again.

I love the CoJ Readers book recs (found Station Eleven here!). Have any of you read twisty new thrillers? I recently enjoyed The Club (Ellery Lloyd)

I just finished The Plot by Jean Hanff Korelit. Definitely twisty and it’s going to be a series soon (on Hulu I think)!

Stories centered around bookstores, anything set in Scotland, a twisty turny romance and if all three come together in one book then I’m in heaven. I love a Jenny Colgan novel

I read audiobooks when I run. I like funny ones that make me smile and laugh because then I give the impression that running is easy for me. I also like to listen to books that are just the right amount of political because they make me run faster. Recent audiobooks I loved running with are Lindy West’s Sh*t Actually and John Green’s Anthropocene Reviewed.

Books that have delicious descriptions of food – that’s my JAM!

Kitchens of the Great Midwest is a mouthwatering novel, and The Flavor Thesaurus by Niki Segnit is a wonderful resource.

YES always have, always will – I remember re-reading Farmer Boy about a hundred times just for the descriptions of Almanzo’s mother’s cooking. The pancakes! The PIES!

I love a British novel written by a woman in 30s, 40s, or 50s. Give me a spinster, a vicarage, a woman trying to open a hat shop or wondering if she’ll ever be able to make it on her meager inheritance. Basically, anything that’s been republished by those geniuses over at Persephone Press.

although i try to get a lot of my books from the library, this is nothing better than that first time you open a brand new hardcover book you’ve been dying to read.

I agree, such a pleasure.

I love it when there’s food in the book too, which there almost always is! It instantly connects me to the story with my taste buds!

Have you heard of The Little Library Cookbook by Kate Young? Sounds right up your street!

Yes! I 100% agree. Have you read any of the Louise Penny books? They’re murder mysteries with a side of delicious descriptions of food.

Two things I love in books = regional quirks in mysteries + pet Siamese cats, so I fell really hard several years ago for Janwillem van de Wetering’s Amsterdam Cops series (which I passed on to my husband, who also loved it). If you’re in need of a delightful, new-to-you bunch of reads (they’re pretty easy to find online), check them out: the author was both an actual policeman and a Zen student who spent a year in a monastery, and his crime novels (mostly published in the ’70s) are a delightfully wholesome Dutch version of TRUE DETECTIVE, where instead of Matthew McConaughey and Woody Harrelson you get this weird and very philosophical buddy series about a roly-poly old family-man cop who partners with a flashy ladies’ man in denim suits (he has the Siamese cat, Oliver), and when they’re not solving crimes they just kind of wordlessly meet up at the office and jam on some drums the older cup seized in a case and a flute the younger cop carries in his denim suit?? In one of the books, if memory serves, a witness joins in on a groove session.

To quote a review of the first book in the series, “As long-time fans know, Outsider in Amsterdam, like other van de Wetering mysteries, is not a book to read for excitement, violence, or catharsis. It’s a ‘soft-boiled’ mystery to engage one’s brain and evoke the easy-going and permissive attitude of 1970s Amsterdam and of its two famous fictional cops, who are amazingly chilled-out and who treat everyone, including suspects and criminals, with respect and decency.”

This sounds very intriguing! Adding it to my long list :P

Just reserved this at my library. Thank you Lauren O!

Thanks for the recommendation. I just discovered “Tartan Noir” author Val McDermid’s books that are marvelous with regional quirks galore!

You sold this EXCELLENTLY.