The Funniest Game to Play With Kids 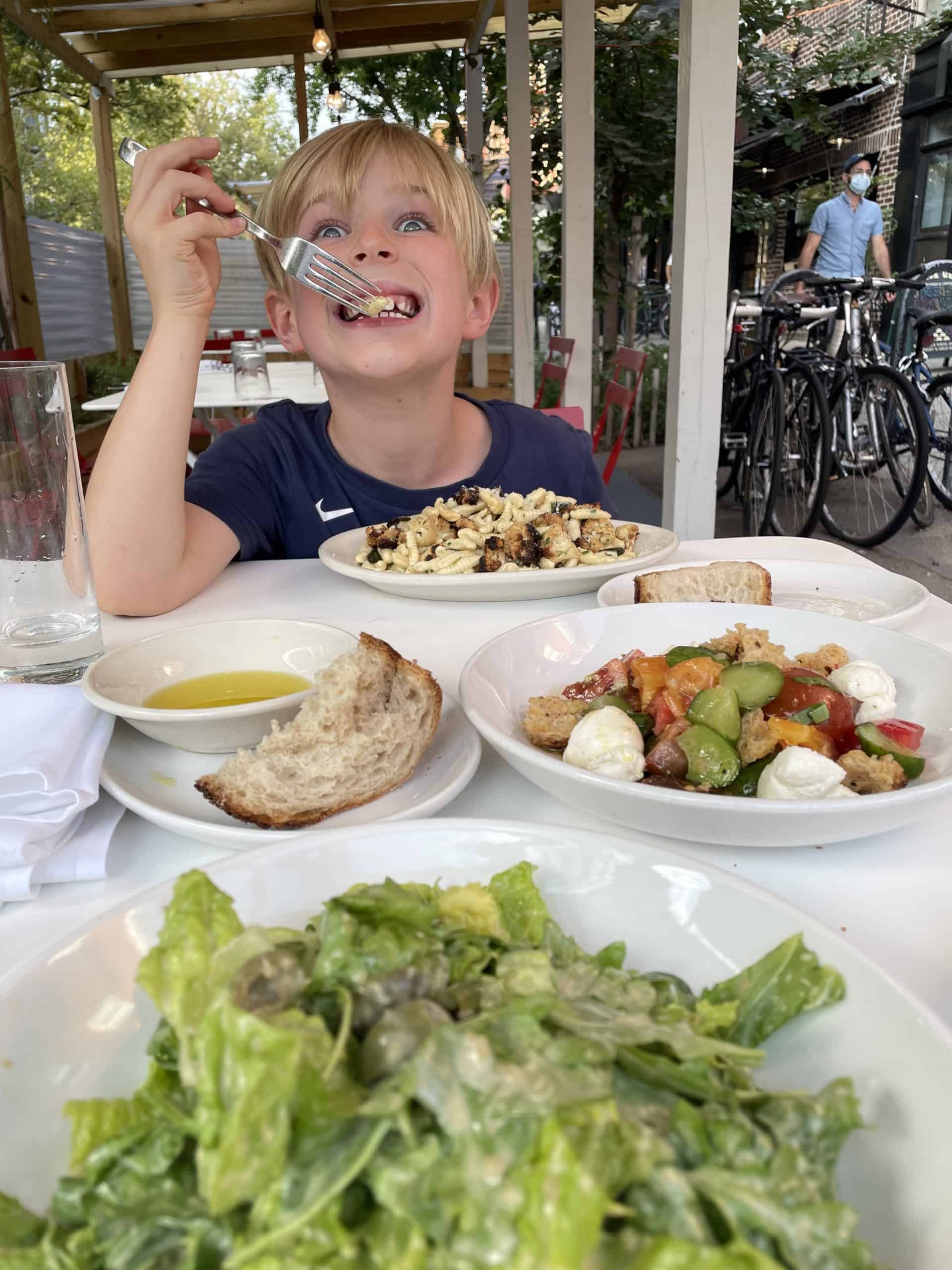 Last night, eight-year-old Anton and I wandered over to our neighborhood Italian spot for dinner.

We ordered salads and pasta and fizzy water (“It’s spicy!” he said). While waiting for the food to arrive, he got a little wriggly in his seat, and I suddenly had an idea.

I explained the rules of the fortune-telling game that I had been obsessed with in middle school (wasn’t everyone?):

M.A.S.H. (Mansion, Apartment, Shack, House)
Imagining your future, you list out four things in different categories (for example, four possible spouses, four possible jobs, four possible pets), and then choose a number between 5 and 10. Then you count that number (say, 6) down the list and cross out every word you land on (so, every sixth word); until you get to your final answers. Boom! That’s your future.

Turns out that Anton will be a menswear designer in Hollywood with three children. “My fashion company is going to be really fancy,” he told me. “And I already have the best name.” He paused for emphasis. “Lance.”

The next morning, we played with Toby, who is going to be an athlete in Dallas with 78 kids!!!

Did you play M.A.S.H. while growing up? Have you played with the kids in your life? It’s a hilarious way to spend an evening. And if you’re in the mood to play this very second, here’s an online version.

P.S. Four games to play while lying down, and Toby’s very grown-up date.

86 COMMENTS
WRITE A COMMENT
Motherhood
most popular
01
21 Completely Subjective Rules for Raising Teenage Boys
02
Best of: Parenting Around the World
03
Trying Out Slow Parenting
04
How Did You Know You Were Ready to Have a Baby?
05
Three Transgender Kids Share Their Stories
May We Suggest…
By Joanna Goddard
Motherhood
Three Words That Changed How I Parent
September 21, 2020

516 COMMENTS
By Jenny Rosenstrach
Motherhood
Would You Rather, But Better
April 27, 2020

As a kid I played this so many times with my childhood friends. Brings back nice memories.

YESSSS we would get fancy and play SMASH-O and i’m now forgetting what the S and O stood for. Sewer? Outside?? I remember thinking about living in a shack as a kid and it was like a lean-to or outhouse?! so funny.

I loved this game as a middle schooler–my friends and I always played it. And, to come full circle, the person I always had on my list and crossed my fingers I would end up with each time–became my husband 20 years later after many random life events!

I always believed in the MASH!!

Yes, my ten year old loves MASH too! As I did when I was a kid as well. And everything looks delicious at Franks!

Also in BC Canada!

I wrote about this too! My daughter latched on to MASH so eagerly!!

Perhaps it is because quality time is my highest love language (and that specifically, sharing meals at a restaurant is even higher/the best form of this for me!) — I love so much that you spend time like this 1:1 with Anton. I remember years ago reading a post about 1:1 time helping kids so much in various ways, and I find that so true of adults too. A single 1:1 dinner with my sister or mom or a close friend feels like exhaling to me, and can somehow resolve any slight frustrations or anything else we have going on (often without even discussing directly!).

I came here teary from the post on Afghanistan, and then reading this made me teary in a grateful/happy way to think of how special a solo dinner with my mom would have been at age 8 (and every age subsequently, including currently — it is always such a treat when she and I are in the same city and able to do so!

You are a wonderful, accepting, loving, and fun mother, and I hope you know how treasured these small, simple things are to those with whom you share the stories.

Lance!!!! This kid is a genius – you may want to frame those MASH pages for future gifting (college graduation maybe?)

UK reader here….. never heard of MASH but the paper Fortune Tellers were everywhere when we were kids. Who knew they were called Cootie Catchers on the other side of the pond?!

So cute – similarly I made my toddler one of those little folded paper “fortune teller cookies” and made the answers different professions. She loved it and has been asking everyone if they want to find out “what they’re gonna be”. My mom was over too and laughed about how she found them all over the house when I was a middle schooler.

MASH is a great game for long car rides too! We played it with my three kids on the way to the beach this year and they LOVED it. BTW, when I grow up I will be a lady of leisure with no kids, driving a pickup truck, and married to Harry Styles! lol!

I love games! I used to play Canasta with my bestie when we were in elementary school—hand after hand like two old ladies. In middle school we graduated to MASH, which was always fun and cringe inducing. I’ve played this with my daughters and they thought it was hilarious! They love games, too. Our fav game for when we are out and about is something we call “Real Person Guess Who.” One person thinks of someone we all know and the others ask yes or no questions to figure out who it is. This is a great car game or hiking game. We usually do kids and parents/teachers we know, but I did the local car dealership guy (who has tons of commercials on the radio) and they were sooo stumped and then absolutely giddy when the guess it! It’s fun.

We used to draw spirals and then the MASHer (whose future was being foretold) would say STOP at a certain point. And then we could count the number of circles that ended up being in the spiral and that would be the number we used to cross things off! Was this a Miami, FL quirk?

That’s exactly how we played in Orlando!

Did this in San Diego, CA too!

That’s how I did it in the UK too!

That’s exact how we did it in Vermont!

We played this way in Chicago too ;)

Spiral counting in Montana, too! xox

I have to ask: what are the toilet options??? so curious!

I love MASH! But when I played, H stood for homeless !

I played this with my 12 year old and 8 year old just last week!! They love it, I love it. It’s silly and ridiculous BUT I also discover so many tidbits that I’m sure I’d miss/they wouldn’t tell me without this funny little game.

Joanna – just wanted to say thank you for engaging so much in the comments section lately. I can’t imagine how you find the time to do it, but with connections feeling so important and so scarce these days it’s uplifting to read your voice being so present in this wonderful corner of the internet.

I’m so glad, Angie. thank you so much. this community is so meaningful to me.

Just wanted to say that I am having a rough day and seeing that photo of Anton and that delicious food made me happy.
Hope it was a memorable night for you and I’m looking forward to doing the same with my 7 yr old once our baby is in toddlerhood.

Me too re rough day and finding respite and heart warmimg here. Thank you Cup of Jo! (Also really makes me want creamy pasta and a date with my kid)

We used to play that non-stop! Though we changed the S from shack to summer-house because we thought shack was too cruel, haha!

Yes! The rainy day, indoor recess game! The way we figured out the # was that the writer would start making a spiral swirl on the top corner and the one whose future was being told would close their eyes and say “stop”. The number of lines in the swirl would be the count.
I remember the fear when friends would write down your crush as one of the choices – can’t let that paper get into the wrong hands!

SAME! On how we determined the number.

Yes, the spiral is how we used to do it too! I’d forgotten haha. And yes, it was an unspoken rule that each category had one preferred option (hello, crush), one average option, one horrible option, and one ridiculous option.

I’d like to say thanks for the lighthearted content (alongside the heavier posts, also appreciated, especially when we leave with an action item). On days like today, however, when the news displays a world that seems to be crumbling around us, it’s really nice to have a place to come for some light content while I try to get my heart rate back down. Thank you for all you do!

I agree! Thank you for the respite from the news cycle

Loved MASH growing up! My teenage son and I just went on a glorious vacation with no wifi. We spent all week playing a game we made up and while he initially mocked me (I tend to make up a lot of games, some are winners some are flops), we both had so much fun!

One person starts by saying “I’m thinking of a word”, the other person then says any word. The person who is thinking of the word then gives 1 clue per turn. For example, no, that’s not my word, but my word also starts with an a, or, no that’s not my word but you can also eat my word, or my word has the same number of letters as that word, really any clue you want. I’d say we guessed the actual word within ten tries/clues almost every time. Silly, fun and no equipment needed!

that is really fun, florencia! (also it warms my boy-mom heart to hear about your magical trip with your teenage son.)

Hi Joanna! I only have a sample size of 1, but I find teenagers to be an absolute delight! Both my son and his friends are charming, funny, silly and smart, I enjoy their company so much! They also make the best playlists. Teens get a bad rep, but I have yet to experience the horrors so many talk about. You have so much to look forward to with your sweet boys!

I just found a “MASH” pad at the dollar spot at Target last week. My preteen daughters love to fill it out and giggle with their friends. It sure does bring back memories!