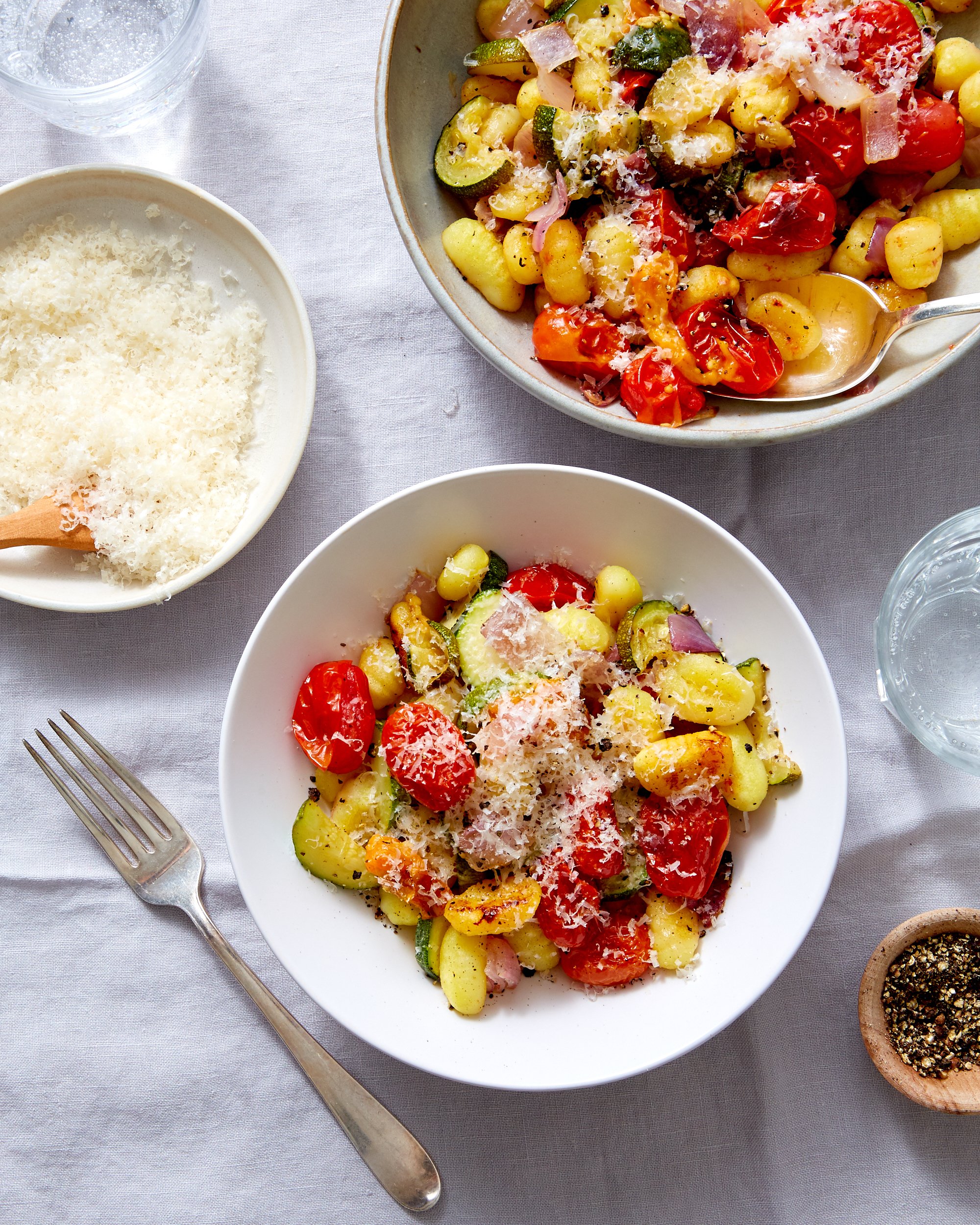 …you can prepare gnocchi not only by gently simmering the little Italian potato dumplings in water, then tossing them with your chosen sauce, i.e. the traditional way that yields tender, pillowy clouds, and that I would not ever in a million years turn down. A few months ago, I came across a recipe by food writer Ali Slagle that called for pan-frying a pack of shelf-stable gnocchi in oil and brown butter, yielding crisp-tender biscuity bursts. My 17-year-old daughter has made this recipe at least 17 times — often using the cauliflower gnocchi from Trader Joe’s — and now when I eat gnocchi, I crave that crisp.

And thanks to Cup of Jo reader Rachel Robertson, there is a new gnocchi preparation threatening to take over in my house. When Rachel responded to our Instagram request for five-ingredient dinners with this roast gnocchi recipe, it was remarkable for the crispiness of the gnocchi, the short ingredient list, and the stunningly simple preparation. She just tosses (shelf-stable) gnocchi with tomatoes and squash in olive oil, spreads everything on a baking sheet, then blasts it in a hot oven. “This recipe is extremely customizable depending on what’s in season and what you have on hand,” she says. “I’ve mixed things up swapping in garlic, bell peppers, asparagus, squash, peas or broccoli. But onions and cherry tomatoes seem to be essential, as they’re packed with acidity and sweetness, so you don’t have to add many other seasonings.”

We love it just the way it is. Thank you, Rachel! 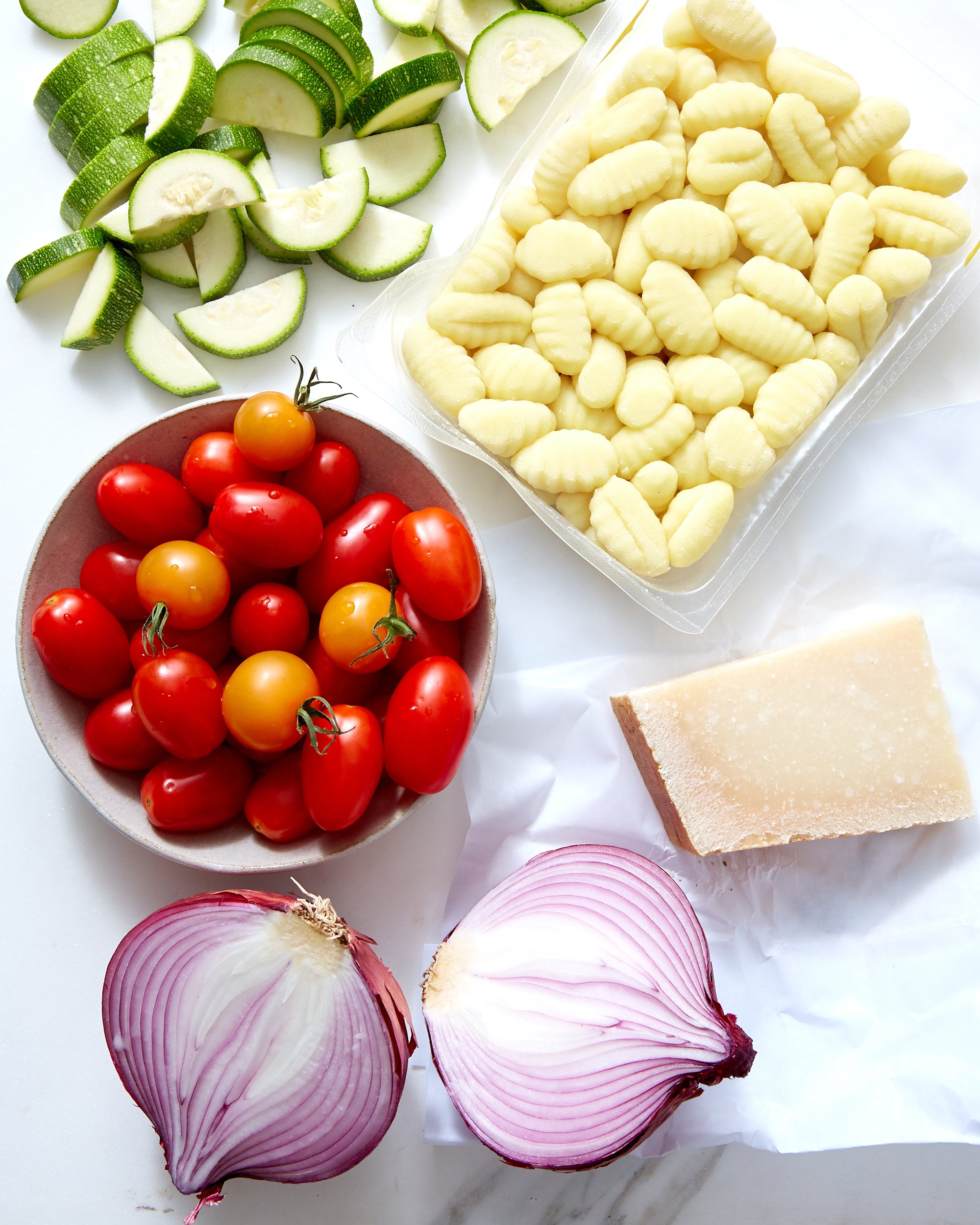 Preheat the oven to 450°F. Line a baking sheet with parchment paper. (Or line it with foil and brush with oil.)

In a large bowl, combine the gnocchi, tomatoes, onion and zucchini with olive oil, salt and pepper.

Spread mixture evenly on the baking sheet and roast for approximately 20 to 30 minutes, or until the tomatoes burst, and the onions look caramelized.

Serve in a bowl and top with as much grated cheese as you can handle.

*We aren’t counting olive oil, salt and pepper as ingredients.

P.S. More five-ingredient dinners, including the yummiest chicken and a dinner with a nickname.

LOVE THIS RECIPE! Doubled it for 4 adults. Last minute sprinkle of garlic powder before it went in the oven. Added fresh basil right after it came out. So good, especially since 80% of ingredients were locally sourced and in season!

OK, I had my doubts, but I was out of dinner ideas last night and tried it. It did not disappoint! Served it with grilled teriyaki chicken from the Traeger and was a happy, happy girl. Next time I’ll have it with a spoon of fresh ricotta and a drizzle of lemon. Thank you for this quick and easy dinner!

I can’t wait to try this recipe! I know you’re getting a lot of feedback about your updated website design. I’m really excited about where it’s going! It would be nice if posts like this printed in a nice format so it could be tucked away in a recipe binder.

I made this, but I use the frozen kale gnocchi from TJs straight out of the package. I thought it worked great! The gnocchi were nice and crispy – definitely the best way I’d had this particular gnocchi before.

I love crispy gnochhi! such a great and easy dinner. A yummy variation for autumn is butternut squash, sage and mushrooms with ricotta or goat’s cheese dolloped on top.

For your international readers – how much is a “package”? Ideally by weight please?

Typically, a package of gnocchi is about 1 lb. (Most pasta is packaged similarly here.) The gnocchi I current have in my pantry is 1.1 lbs. (17.5 oz.) Hope this helps!

This sounds soooooo good! Can’t wait to try it!

I prefer gnocchi roasted too! Love the bit of crispiness you get. ! I toss the gnocchi and veggies in jarred pesto and it’s delicious.

Just made this for dinner — so good!!!

Great choice! I’ve been making a version of this for a few years, and it’s always wonderful. One really important thing is missing though– add a drizzle of (preferably aged) Balsamic Vinegar over each plate when you’re ready to eat. It adds so much flavor! (My recipe called for reducing the vinegar by simmering it on the stove first, but I usually skip that step and it’s fine.)

Crispy gnocchi. Potatoe gnocchi are basically what Germans call Schupfnudeln. And one of my favourite dishes is fried Schupfnudeln/gnocchi fried in butter with apple sauce and a bit of sugar. Related and equally good are Reibekuchen which are potatoe latkes and these are also eaten with apple sauce. If you find the concept of mixing apples with potatoes weird I urge you to give it a try. So so good!

Would you elaborate please on what you mean by “shelf-stable” in this context? Does this mean use pre-made, as opposed to fresh made gnocchi? I’ve never seen that terminology in a recipe before.

Hi Claire, I interpreted shelf-stable to be “a package of plain gnocchi that is stocked at room temperature in the grocery store” as opposed to a bag of frozen gnocchi. :) not sure how the recipe would be affected by using fresh gnocchi, but seems like they might not hold their shape as well?

Yes, Mary is correct. Shelf-stable products can be stored at room temperature (as long as they are sealed). De Cecco and Barilla both make it. I think Rachel called for shelf-stable here for its ease — because it works right out of the package.

Wow this is F-ing amazing and riiiiiight up my alley re: the amount of energy im able to expend in this season of life (toddler). YAY!

Any recs for gluten free gnocchi brands? We are new to GF diet and this looks delish!

I’ve been using Le Veneziane potato gnocchi; pretty good and shelf stable. Not great as leftovers though. Eat them all in one meal. I’ve been getting them online from Supermarket Italy.

Trader Joe’s cauliflower or kale gnocchi are really good! I usually get two bags and mix them for a recipe. As mentioned below, this frozen variety wouldn’t work very well with the sheet pan method, but they are wonderful cooked up with a little olive oil and some water to briefly steam, once a bit of a crust has formed.

Thank you — great recipe idea! When your daughter makes it from TJ’s cauliflower gnocchi, Jenny, does she put it frozen straight onto the baking sheet and into the oven? Or is some kind of thawing necessary first? And thoughts about how to use frozen gnocchi in a sauteed recipe like Ali Slagle’s? Straight into the hot pan from frozen?

I love this type of crispy preparation and I love TJ’s gnocchi, but haven’t ventured into using non-shelf-stable types of gnocchi with the technique.

I had the exact same question! I have TJs cauliflower gnocchi in my freezer and would love to use for this recipe.

We’ve never made Rachel’s roasted gnocchi recipe with the Trader Joe’s frozen cauliflower gnocchi. We’ve only really pan-fried it. It works best when you let it thaw a bit at room temperature, but we get impatient and just chuck it in a medium-hot pan with olive oil. It takes a little longer that way, but the dumplings are small so still don’t take forever.

I roast the TJs frozen cauliflower gnocchi regularly in my convection toaster oven, I find tossing with a little oil helps it not to stick. I wouldn’t roast it with the veggies though because the extra moisture would probably make it super mushy. On its own it gets nice and crispy in the oven.

One of our regular weekly recipes is sheet pan gnocchi and I almost always use frozen Trader Joe’s Cauliflower Gnocchi straight out of the freezer. In fact, I often use frozen broccoli and frozen chicken sausage (sliced up) all directly from the freezer in the same recipe! Just add fresh cherry tomatoes, olive oil, S&P. Roast at 425 for about 20 mins, squash down the cherry tomatoes, and roast another 20 minutes. We like to top with fresh ricotta!

I love this series and these are all staples that are in the garden currently so thank you. I’m going to try it and curious as to how gnocchi cooks in the oven. Yay!

This Instagram link (please work!) has a similar roasted gnocchi recipe that we’ve made at least 6 times this summer. This account and others have nudged me out of my same old, same old rut.

You can also air fry (if you own an air fryer) them and they get that nice crispiness!!

The Kitchn had a version of this a while ago and I’ve been making it regularly since! It reminds me a lot of a German dish (Schupfnudeln, or potato noodles) I had and loved while living in Bavaria – onions and cheese were vital parts of that dish, so I always include them in my versions. So good and easy on a weeknight!

Not gnocchi-related (but all these ideas sound super yum)… the last couple of days the formatting on Cup of Jo has changed for me and the “before the jump” text is cut off by the image when i view a blog page. Then the number of comments and “write a comment” text is overlayed on the image. Still working out some design kinks, maybe? Or is it just me?

I’ve been having the same problem! :(

Love cooking gnocchi this way! Thank you! I use yellow & orange peppers in addition to tomatoes and red onions.

I’m leaving work now and going to Trader Joe’s! Such a brilliant idea!

Ok, for some reason I just imagined you mid workday reading the post and then storming out early to go to to TJs with no intention to return to work. Haha! Hope you had a good TJ run!

This sounds delicious! I wonder how it would work with some chickpeas or cannellini beans thrown in, maybe at the end?

I learned about cooking gnocchi this way from a CoJ comment thread years ago! It’s been a mainstay at my house ever since, and I think gnocchi is so much better with the contrast of the crunch than prepared the traditional way.

As a person who sells (and thus eats) produce for a living, I’m just going to give a *tiny* addendum here, for folks who try this recipe: don’t get grape tomatoes if you have other, in-season, options. They just aren’t that good.
Compare to almost any other cherry-sized tomato, grape tomato skins are thicker, they are less juicy, less sweet and the shape means there’s less tomato flesh (a higher flesh-to-skin ratio). They are GREAT for keeping their shape in a pasta salad or other potluck dish- stronger skins, less juice works there – because they were bred for these shelf-stable, easy to ship qualities. But when you want a tomato to bust open and give a dish some sauce, grape tomatoes just aren’t it.
Sungolds, Sweet 100s, Tiger stripe – even mixed pints will give you better results.
End rant/Thanks for coming to my Ted talk.

thank you so much, Jessica!

Yes! Grape tomatoes are my nemesis! It drives me crazy when my grocery delivery subs them for cherry tomatoes–they are NOT the same. (Luckily we have plenty growing in our garden now)