A Week of Outfits: Nora Taylor 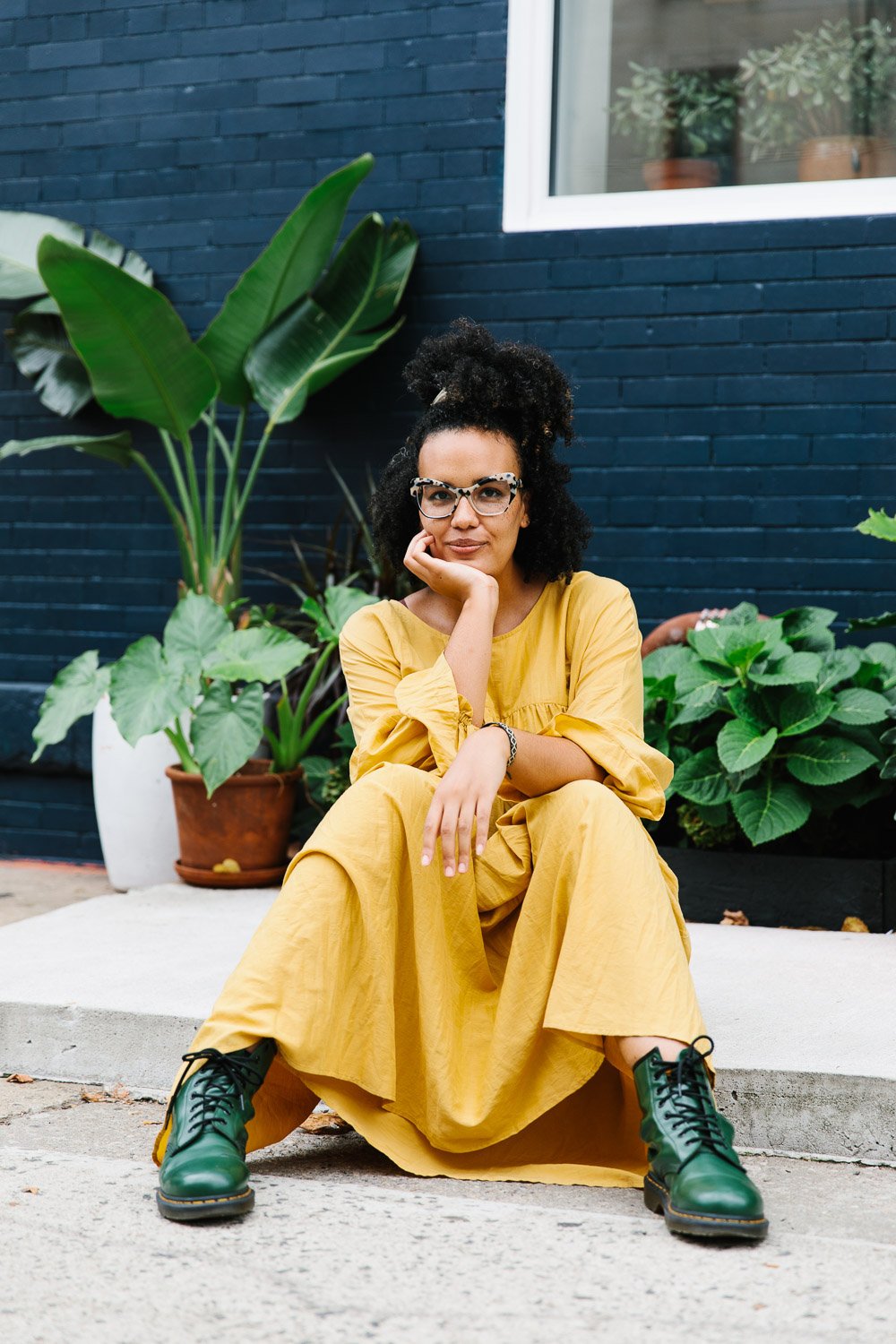 Writer and Clever editor Nora Taylor has two modes when it comes to style. “I fluctuate between wearing all black and wearing colors like a funky poetry professor,” she says. Here she shares five outfits she wore in a week… 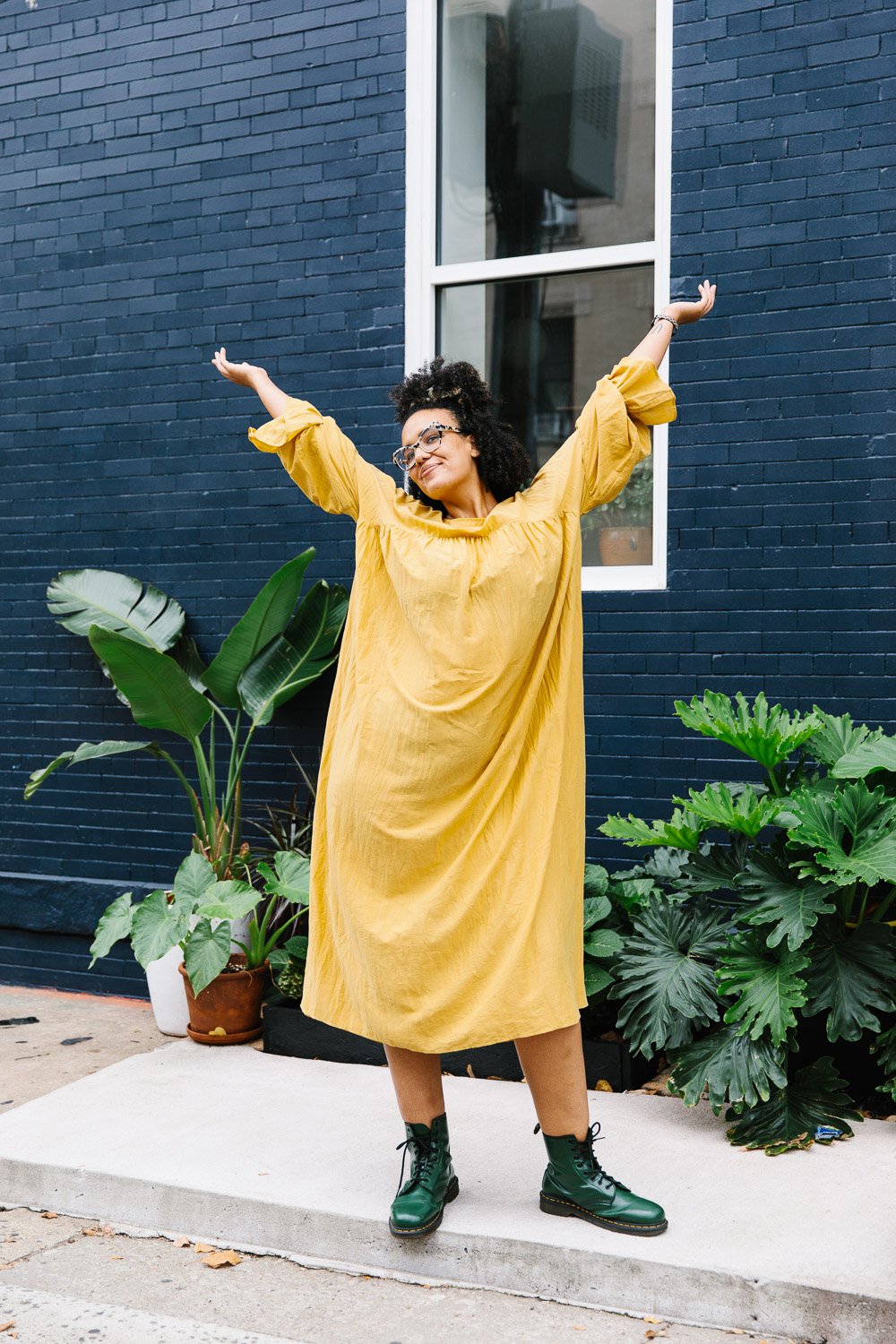 “This dress is from my sister-in-law’s company, Selva Negra. She and her partner, Kristen, run it; they’re both Latina women. It’s a higher price point, but they know all the sewers and pay them well; they use dead-stock fabric and mindfully source their materials. I love the cut and patterns of their clothing, and they’re expanding their clothing sizes, as well.” 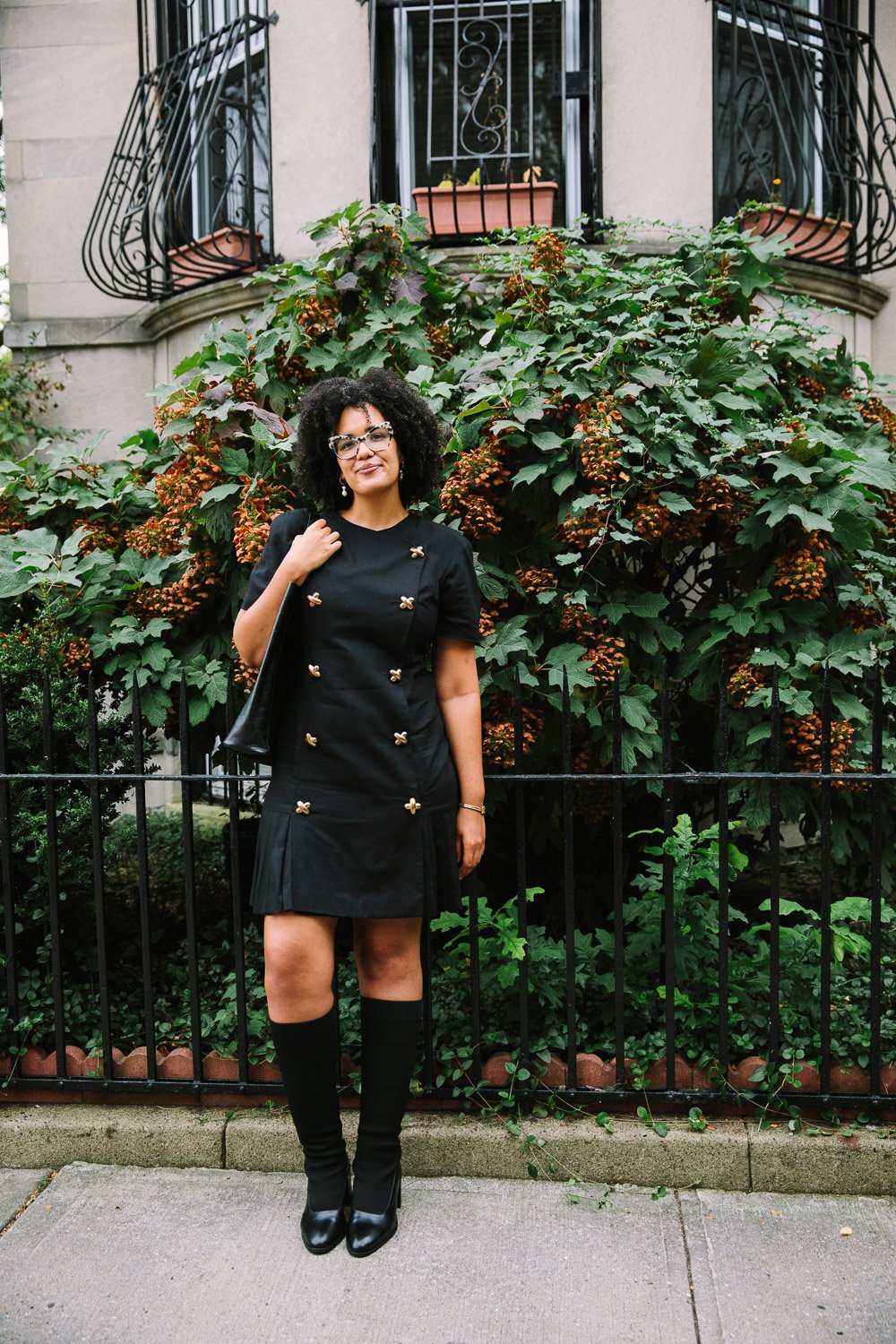 “At the beginning of quarantine, I gave myself the gift of not setting an alarm. But when it comes to clothing, I’m more regimented. I always put on a bra in the morning — it helps turn my brain on. I also try to separate my ‘sleeping’ soft clothes and ‘hanging out’ soft clothes. There’s some form of getting dressed every day.” 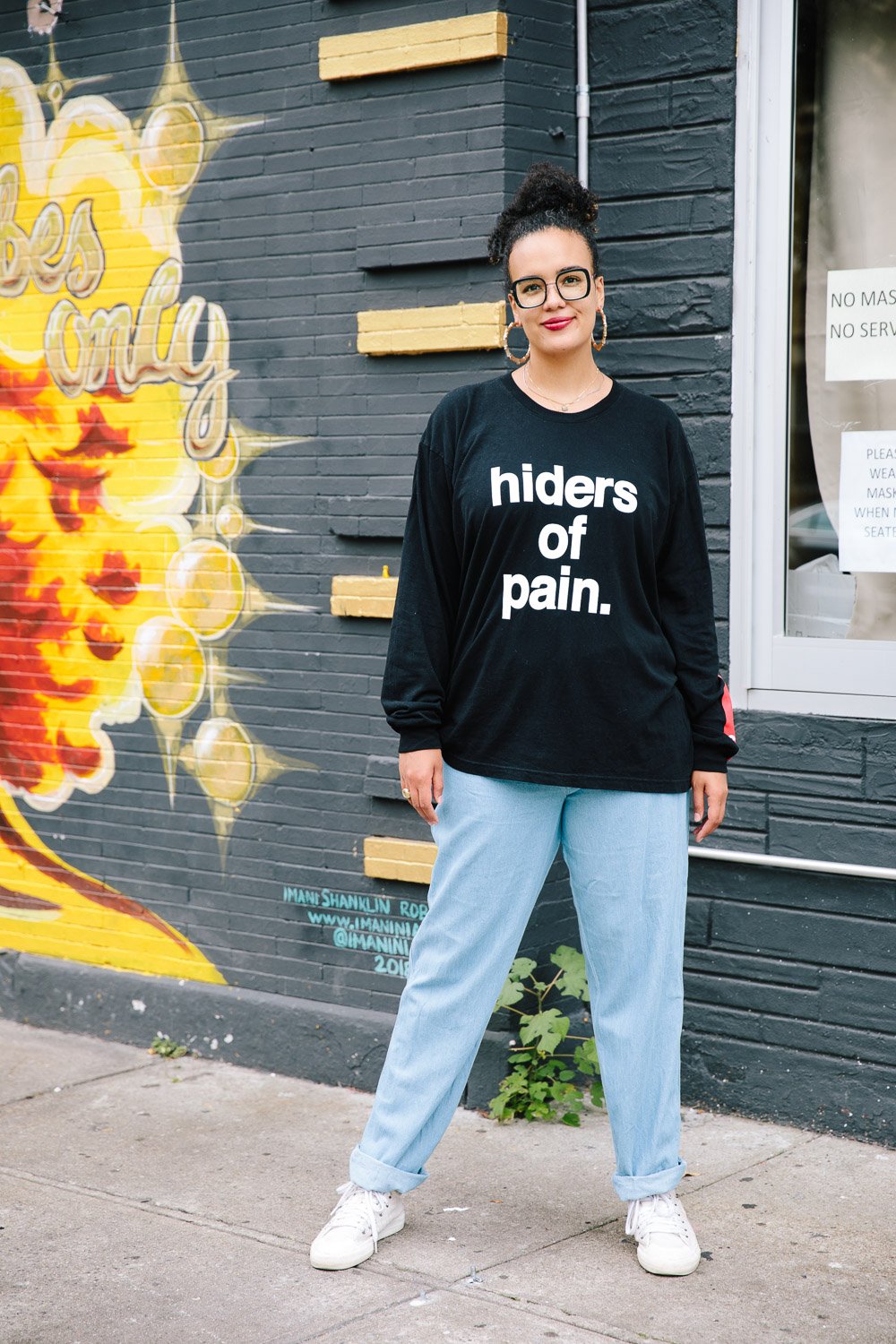 “André 3000 released these shirts after George Floyd was murdered this summer. I was quarantining in Chicago with my brother and his wife and it felt like a miracle that we were all together — young Black and brown people together — deciding whether or not it was safe to go out. Considering the climate of the time, we decided to get them. I gravitated toward this one.” 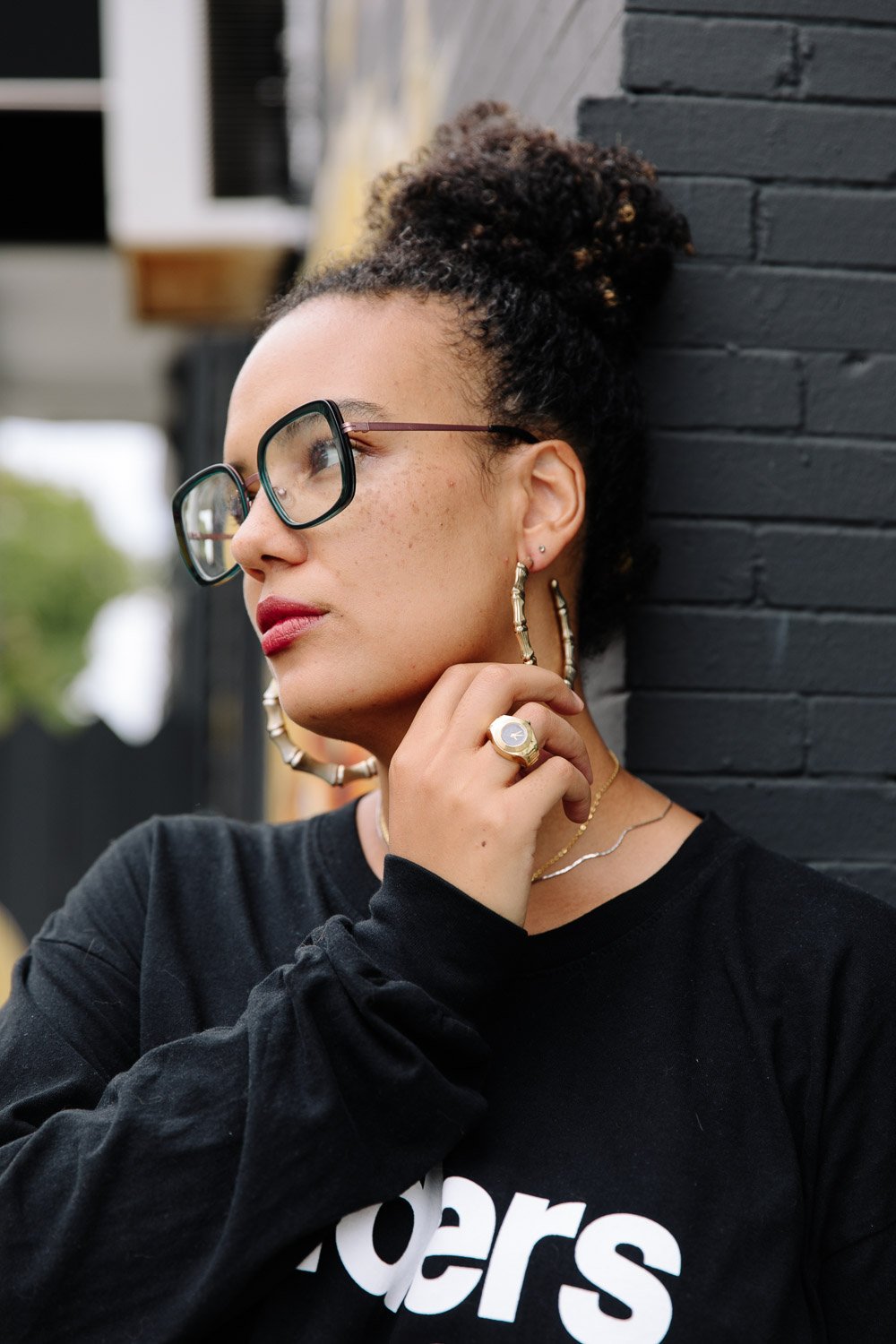 “Big earrings were a thing I started wearing senior year of high school. It was 2005, and I was tall and chubby. Everyone was wearing low-rise jeans and polos and nothing looked good on me, and then I started wearing big earrings and it felt right. I got this watch ring at an outdoor flea market in Wisconsin about a decade ago. It doesn’t work and even though I’m not handy I always thought I would fix it myself. It’s the most unique thing I own.” 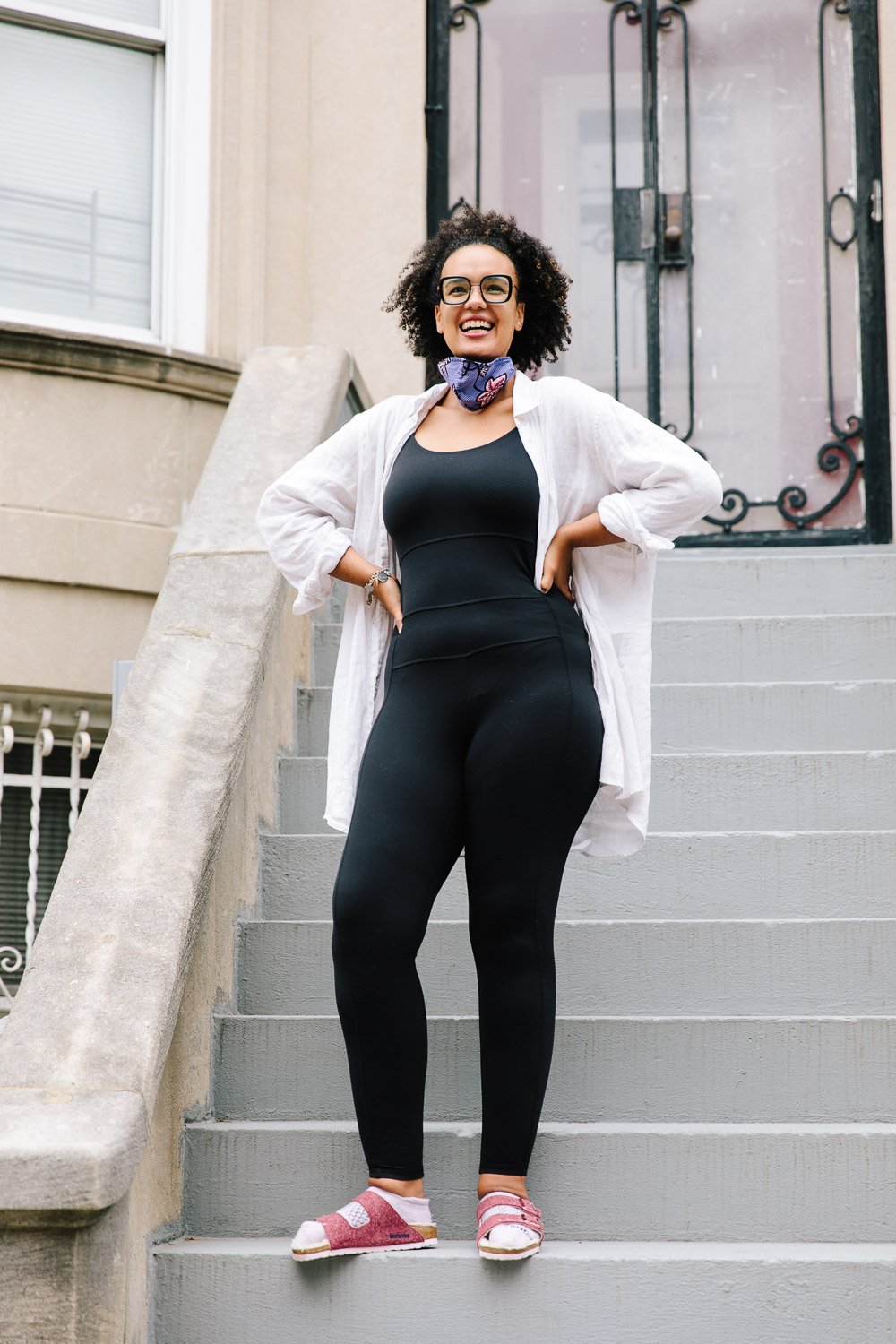 “This jumpsuit is the comfiest, softest thing in the world. It’s perfect to toss on in the morning, whether I’m going to the bank or to work out later. When we go back into the world, it would be amazing for a yoga class because I wouldn’t have to wonder if my butt is covered. I gained weight during quarantine and the impulse was to hide my body, but now I lounge around in it like, ‘This is what I look like now and I’m comfortable.’” 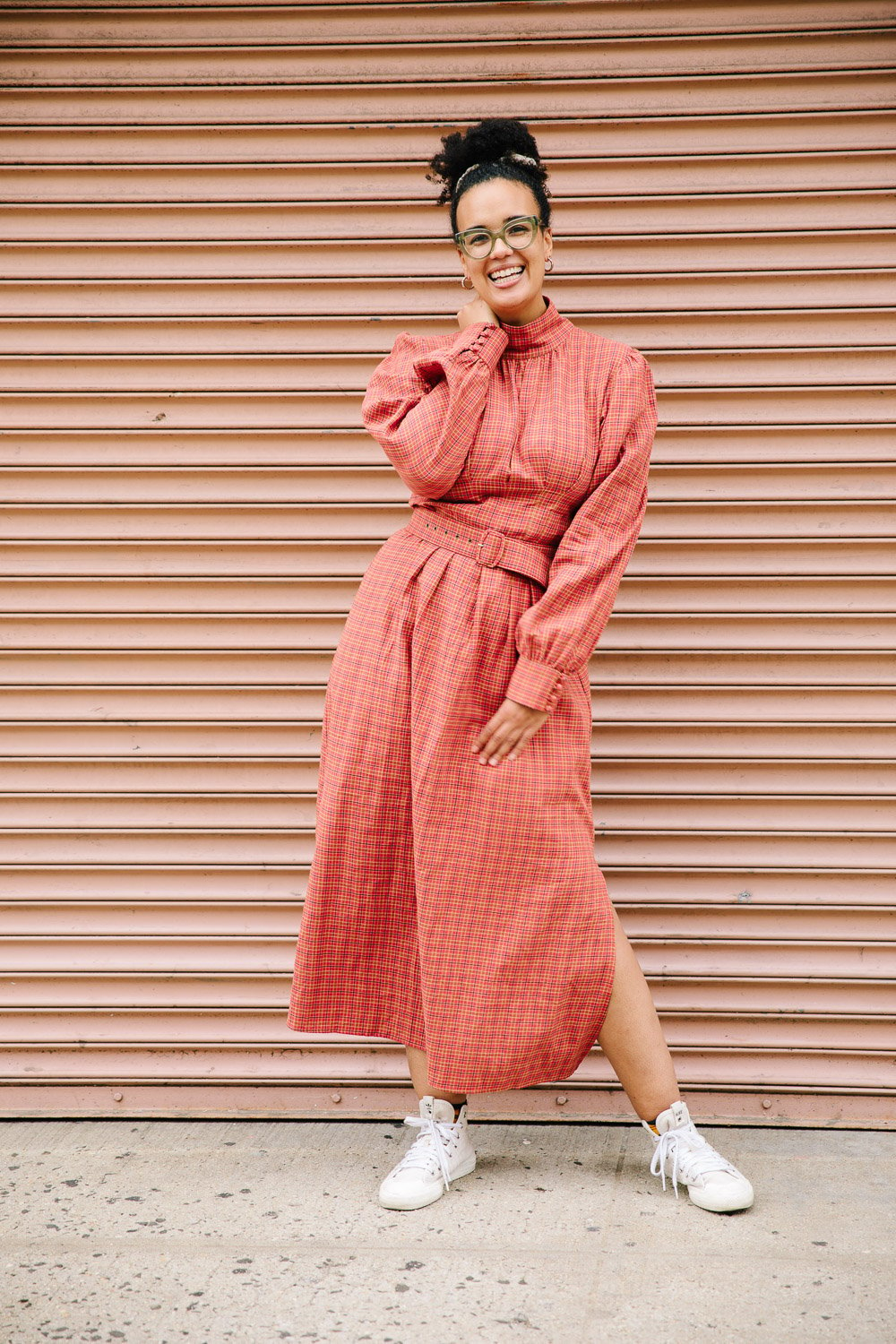 “I was a Little House on the Prairie nerd and also had one of those American Girl dolls that you could dress like. I used to fully dress up along with my Addy doll and go to the farmer’s market with my mom, hold a basket and be like, ‘I picked these turnips myself!’ This dress feels like a grown up, sexier version of that and I’m obsessed with it.”

Thank you so much, Nora!

P.S. More women share their weeks of outfits, including an Afrofuturist curator and a beauty editor.

The thrifted dress and the last dress are my favorites. I love your versatility of style. Keep it up and wear that bra daily … lol

Nora, your style is so fun and inspiring!

I’m kinda obsessed with her! She seems like someone I would love to know in real life!

Love Nora’s style and voice! Thanks for featuring her!

I love this, I love women who are a bit more free about what they wear. Especially as I get older

Love this so much!

Love me some Nora Taylor. We worked together for a bit at Apartment Therapy and no one ever compared to her cleverness. ::heart eyes::

Yay! Love Nora so much and so happy to see her featured here!!

Grown up, sexy Little House on The Prairie nerds to the front! ❤️

Wow, so good! One of my favorite outfits posts and what an incredibly effective ad for Zenni. Love the thrifted black dress, the Addy dress (I can see the book cover in my head), and the Andre 3000 sweatshirt the most.

Nora’s personality comes through so strongly–exactly the elegant and effortlessly cool vibe I aspire to :)

Nora, thank you for this fun week of clothes! In every picture, I just kept thinking “she looks so happy!” “so looks to so kind!”

the description of the last outfit gives me heart eyes! love her looks, and especially her glasses game!

Commenting solely to say that I didn’t know how much I needed to see someone else wandering around in Universal Standard comfy gear, socks and sandals. I see you and I feel seen. Doing the same thing in Detroit today xoxo

Oh, what a smile! I love all of the outfits and it really tickles me how different each one is. Sometimes people seem to have such a cohesive style, and I tend to jump around a lot, so I love seeing someone who does a bunch of different things and looks happy and confident in all of it.
Also yay for American Girl! I was in an American Girls history club as a kid and it was the best thing ever. My daughter is getting into it now and I think about starting something similar someday (we studied one ‘girl’s’ time period each year).
One of my favorite ethical brands, which also uses a lot of deadstock fabric, is Elegantees. Their clothes are great basics with good quality, and employ women rescued from trafficking in Nepal. They employ people in NYC sometimes to continue providing for the workers in Nepal despite covid – they’re the real deal as far as purpose. The owner lives in my neighborhood!

Thank you for telling us about Elegantees! I love their shirts and am buying one right now :)

I’m obsessed with this series. Every time I see a new one I scroll through the post and take each outfit in like a work of art. I love how thoughtfully these women claim their identities through clothes and jewelry, and how consciously they pick pieces based on their values. They’ve inspired me to love my body, take a closer look at thrift stores, and define beauty by what a person does and not their waistline. Thank you so much, CoJ. Can’t wait for the next one!

yep, this is a really good one!

Her style seems so playful, effortless, and chic! I’m so inspired when people are so creative with their looks as I am regularly in jeans and a tee. She just seems so free! Loved seeing her style.

I love her unique style, especially all the fun glasses.

This is a great one! I love her glasses.

Now I’m thinking I need a pair of green Docs…