Together or Apart? When You’re Newly Dating During Quarantine 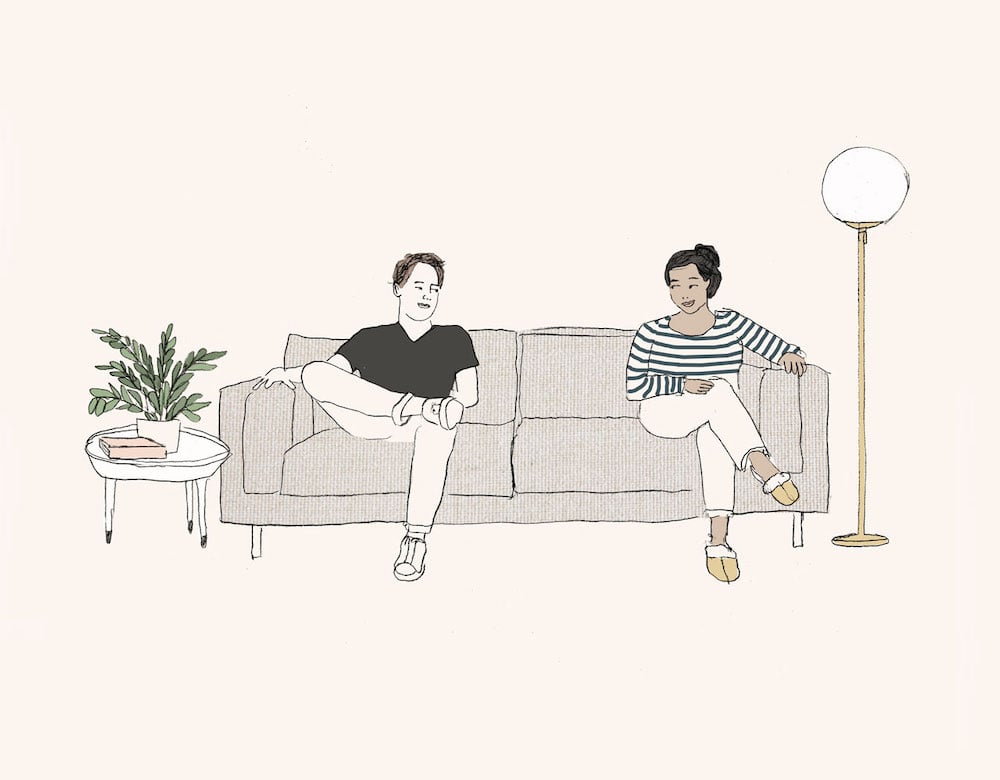 Imagine this: You’re newly dating someone — going out to dinners, flirting over text, wondering if it’s too early to get them a birthday present — when, all of a sudden, the world goes into quarantine. The begged question is extreme: Are you going to be totally apart or never leave each other? (It feels like a Bachelor moment.) What are couples deciding? We talked to four about how it went down…

We’re both single parents, and, before the quarantine, we had just introduced the kids. Now, it was like, what do we do? We’re not at a point yet where we should really cohabitate. The kids are 10 years apart, so I just thought it would be a lot.

Being apart sucks because you want to keep the momentum going. We’ve completely fooled around virtually — and it’s kind of fun. I also happen to be a very corny person, so I’ll make art or send Spotify playlists. Who doesn’t want a love note? Who doesn’t want a song? Who doesn’t want someone to send them a photo of the moon with a note that says, ‘look up’?

This situation has rapidly intensified the ‘I love you’s — when you’re vulnerable, you want someone to care for you and hold your hand, even if you can’t really hold it.

Ryan (and Anna)
Dating for three months
Decided to quarantine together

We’ve been holed up in my apartment. We call it ‘HQ1,’ and her apt is ‘HQ2.’ It’s been like playing house, which is actually a pretty common feature of any new relationship — this period where you nest and lie in bed all day and read together and watch movies together. But now we’re forced into that. I think we’d be doing it anyway but it’s tricky to know, and we both talked about it — are we playing a role here, are we really doing this? What’s going on? And I can’t really say. But it’s been fun. I can be lackadaisical and she Cloroxes the shit out of everything.

For the first few months of dating, we saw each other once a week; now we’re seeing each other every day. It feels like we’ve reached a comfort level you’d usually only reach after a year. She’ll walk around and say, I can’t believe we’re already peeing with the door open!

I’m social distancing, working from home, going on walks six feet away from people; but his business is still open so he’s not quarantining. So, we can’t see each other. It’s been a lot of FaceTime and texting throughout the day. How many weeks will this be? Will there be months of not seeing each other?

When you’re in a new relationship, you’re usually carefully choosing your words and telling funny childhood stories. Now we get a dose of the mundane mixed with the wild. We’ll have the phone on and talk for an hour and one of us is opening mail. There’s not a purpose other than to spend time together. Then we’ll have deep conversations — like, what are we going to do after all this? — that are usually taboo early in dating. It’s like Love Is Blind. We’re dating in the pods!

Katie (and Sam)
Dating for four months
Decided to quarantine together

We’re staying at his place. At first, we were eating dinner in bed, watching TV in bed… and then you think, oh my gosh, what did I do with my day? So, we developed a routine. We get up at 8 a.m., make coffee, go for a walk, start work, etc. We’ve also gotten into tackling recipes, like pasta carbonara and rosemary pork chops.

It’s weird to think we’ll be living together for the next few weeks, when before we saw each other only on the weekends. But it’s like, pandemic, bring it on. Let’s see what it has to teach us.

Thoughts? Are you newly dating someone? What did you decide to do? It’s such a once-in-a-lifetime situation!

By Joanna Goddard
Relationships
Do You Care About Height When Dating?
May 26, 2021

541 COMMENTS
By Joanna Goddard
Relationships
In Which I Ran Into My Ex-Boyfriend
August 8, 2019