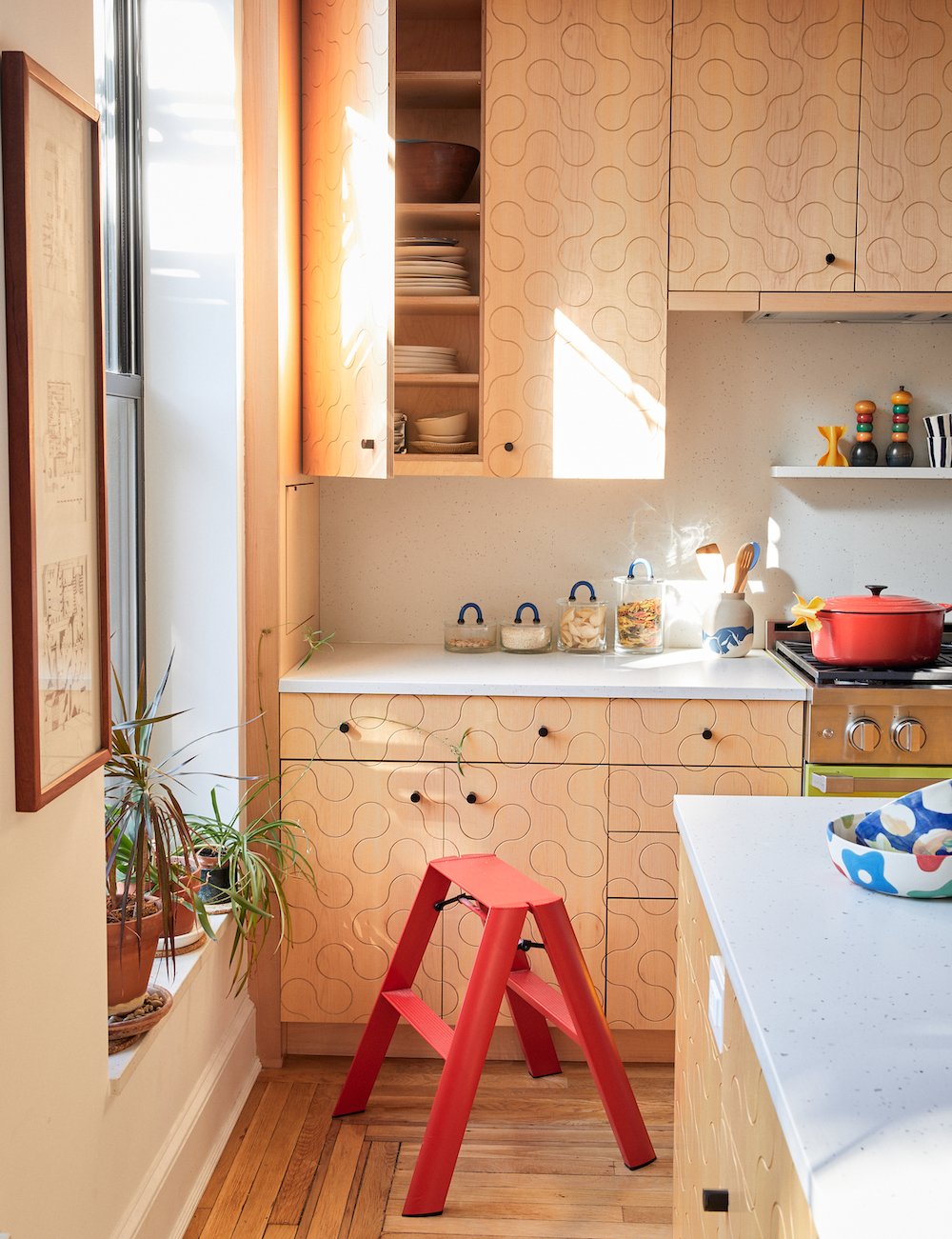 Designer Ellen Van Dusen is a kid at heart. She counts watermelon, sharks and her adorable Boston terrier among her favorite things. So, she brought all these elements into her playful apartment in Bedford Stuyvesant, Brooklyn. Here’s a look around… 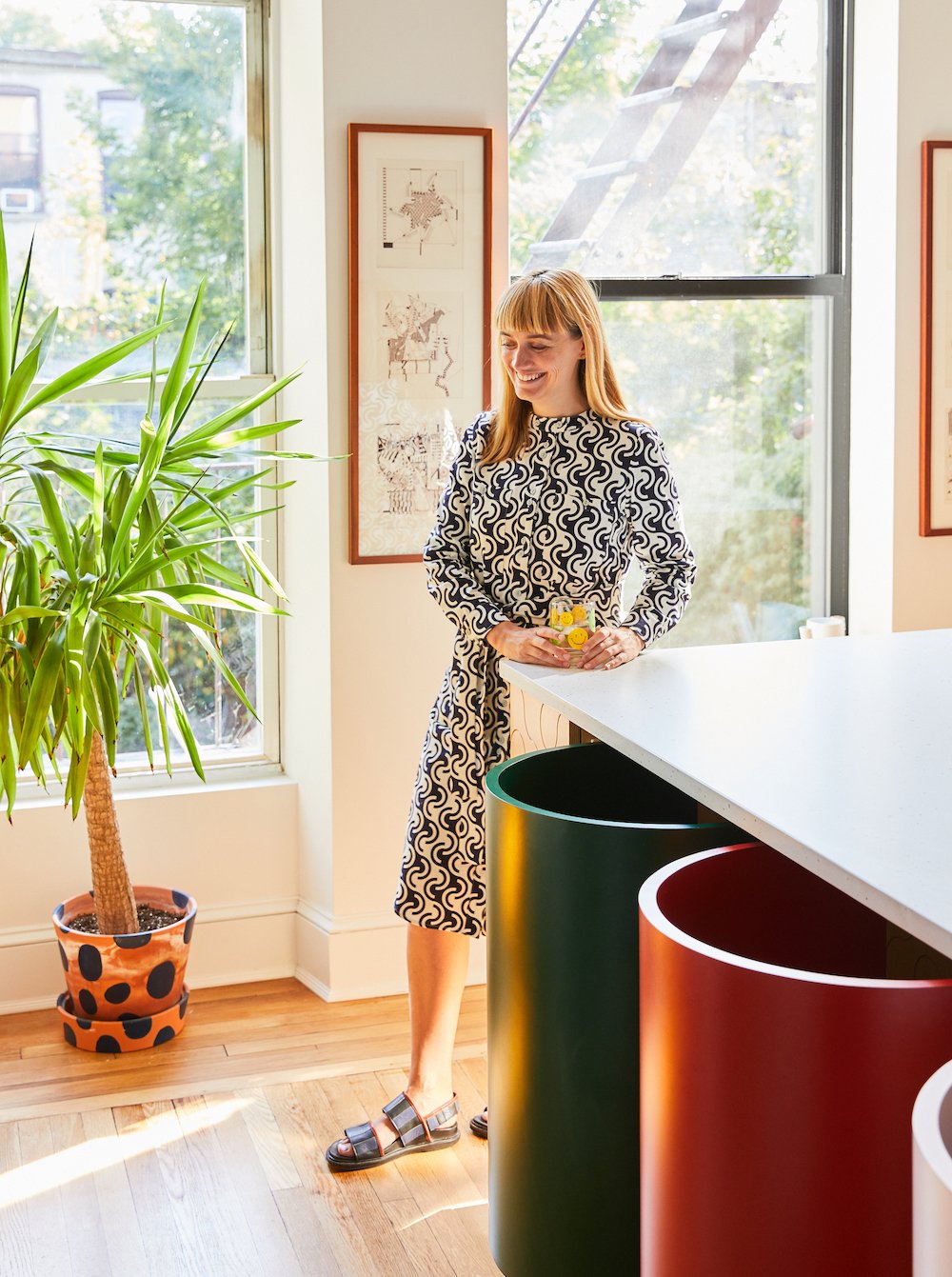 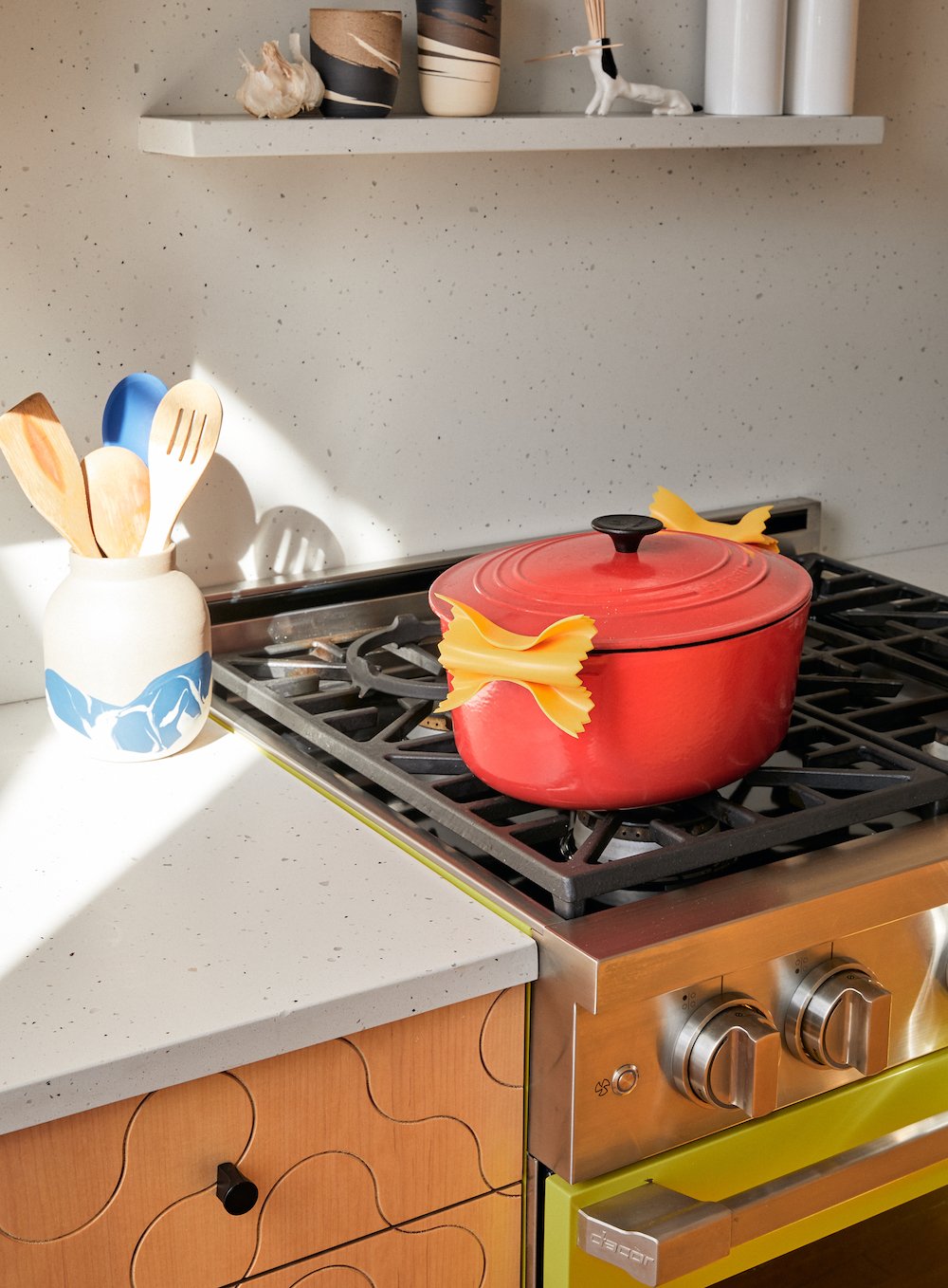 On cool cupboards: My parents are both architects, and my mom did the layout of the kitchen. I have a tendency to go overboard with color, so I was like, Ellen, you can not have a different color for every cabinet. Instead, I wanted the cabinets to be a neutral backdrop, so we decided to have a pattern cut into the plywood. I like it because it’s so simple but looks very complex. It’s a quarter circle turned in different directions. The pattern never intersects or connects so it’s infinite. It extends foreeeeever! 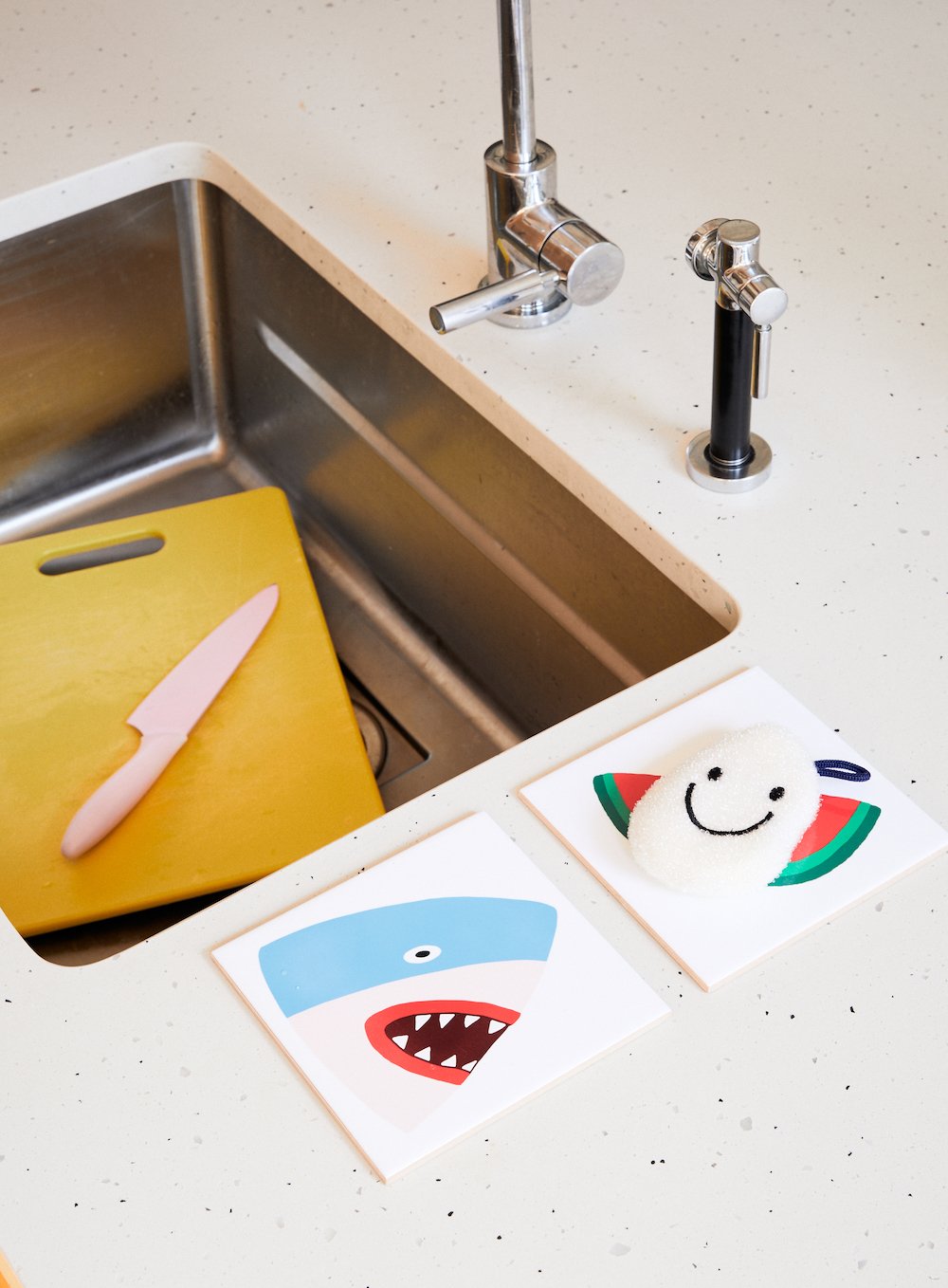 On playful things: I have a thing for sharks, and watermelon is my favorite food. I have too much watermelon stuff. You’d be amazed. I also used to be in a shark club with my friend. It was just two people. We’d make cookies in the shape of sharks. We made zines about sharks. I’m terrified of them and I revere them. 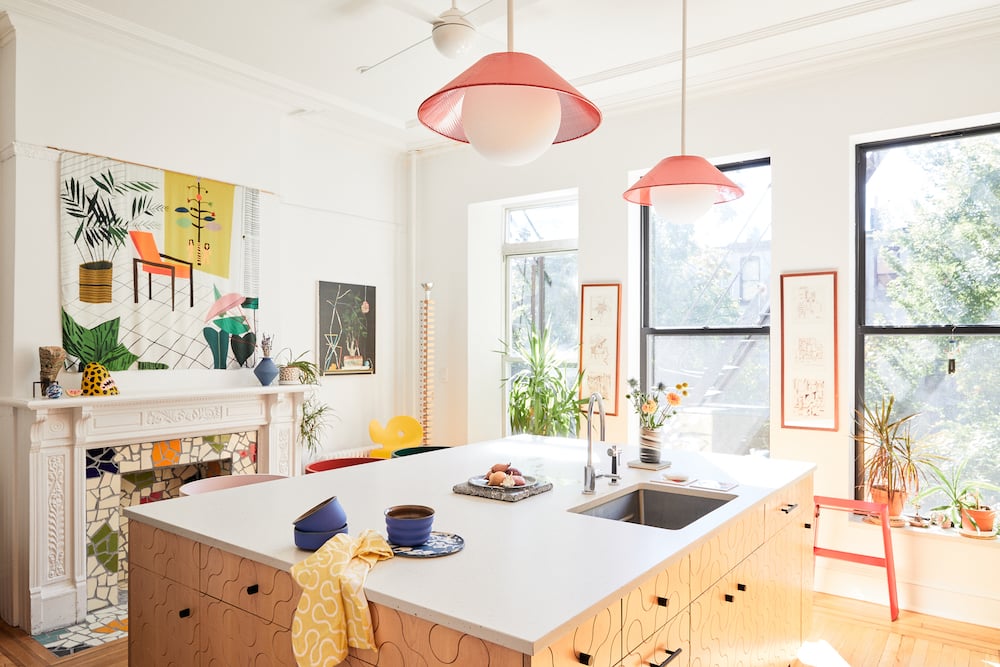 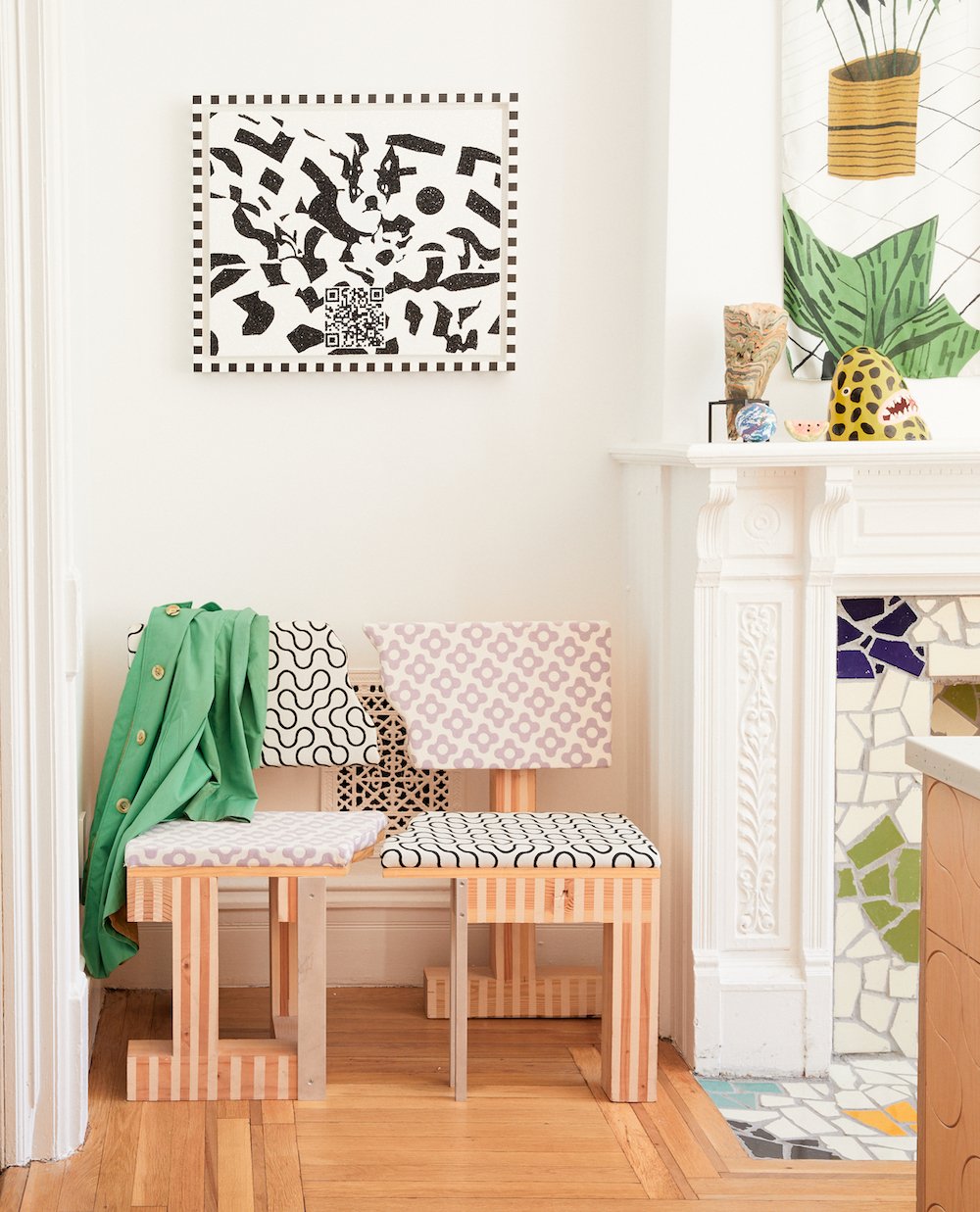 On a portrait of Snips: I went to a fundraising event, where there was a silent auction. I didn’t know many people, so I was milling around, and there was an auction item for a Rob Pruitt portrait of your pet. He’s one of my favorite artists. I was like, I have to win this thing! And I did! His studio asked me for my 10 favorite photos of Snips, and I sent them her Instagram account. I love how it turned out.

On launching a company: I started Dusen Dusen 10 years ago, when I was fresh out of college. I had nothing to lose. I had a part-time job where I was making $12 an hour; and during my off hours, I was hand-sewing dresses in my apartment and selling them to a store in the East Village. I didn’t know about sizing, so I bought a book. I was really nervous when I dropped off my first delivery, since I had no idea if they’d fit a person. But it worked! Eventually, I was sewing a lot and needed to figure out a better way to do it — so I decided to try to sell to more stores, do a trade show and find a factory, and it grew from there. 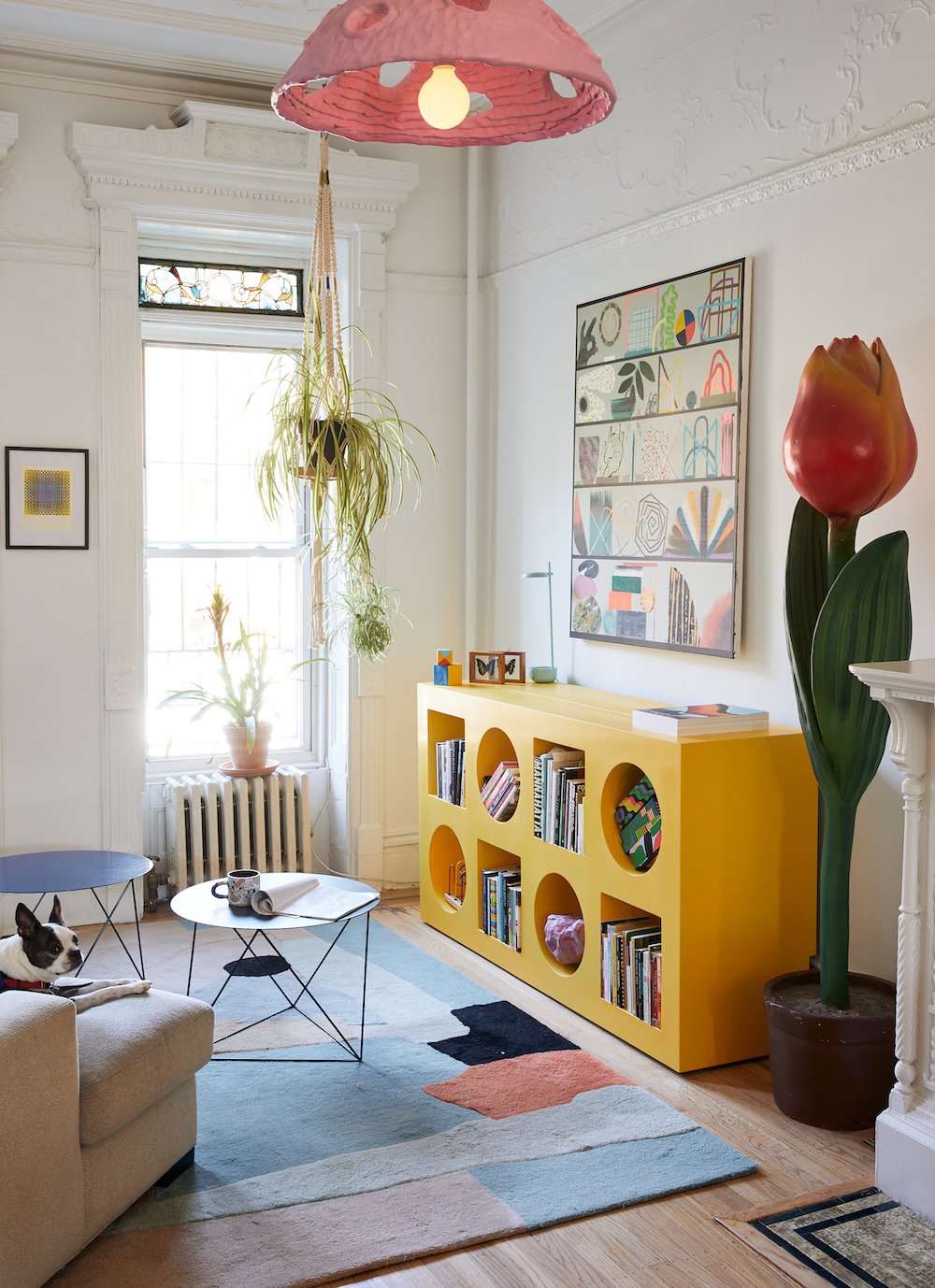 On a conversation starter: When people come over, they always hone in on one thing. Usually it’s the tulip. I got the tulip at an antiques warehouse upstate. I saw it and was like, oh no, I have to have that tulip, what do I do?! Luckily, it fit in my car. 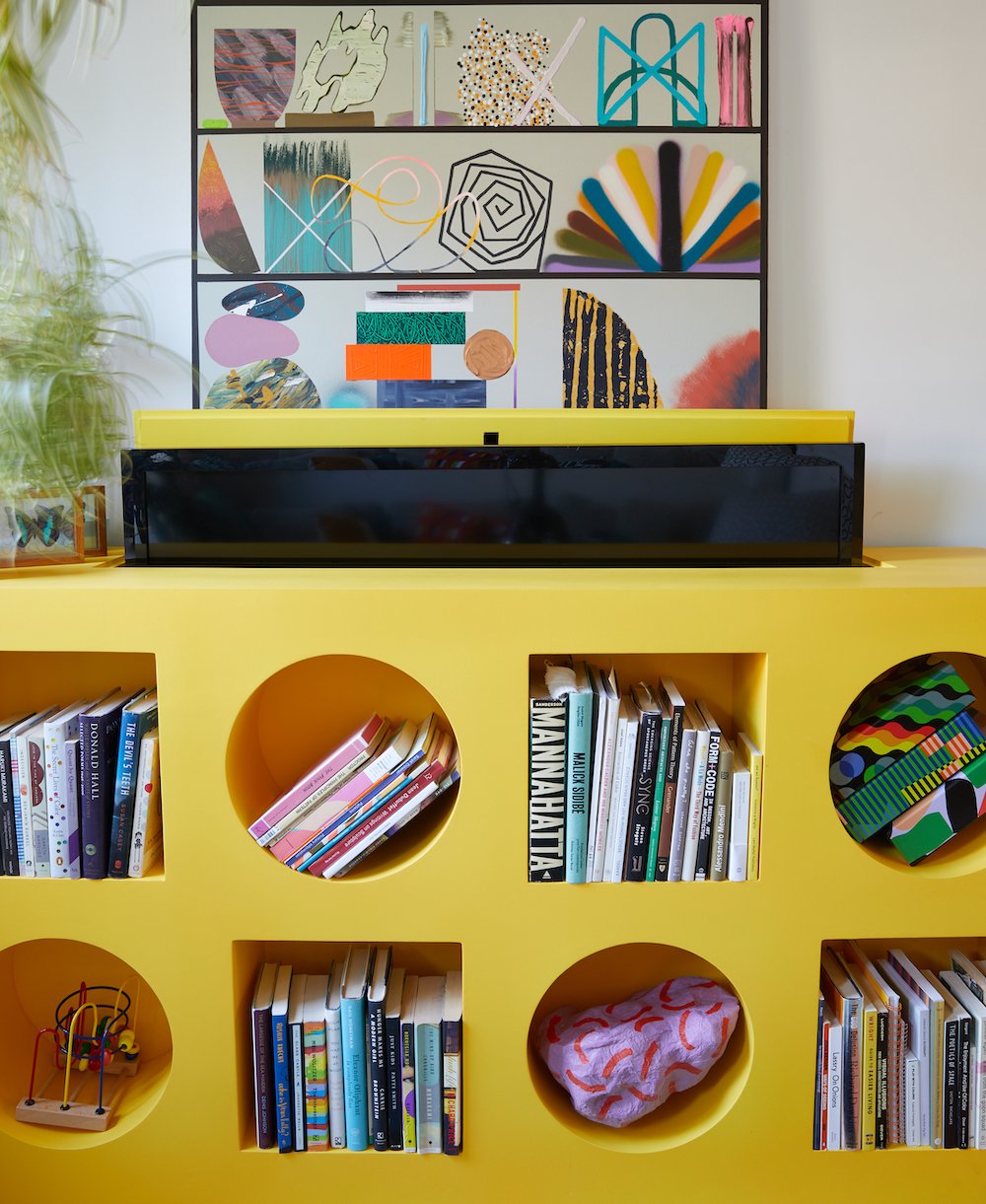 Art above the bookcase: Paul Wackers.

On a TV surprise: I love television, but I hate the way a TV looks. So, I asked a friend, how do we make something that looks good that can also hide a TV? He did a bunch of research and built it into this bookshelf we designed together. You press a button and it emerges. I’ve been watching a show called On Becoming a God in Central Florida. It’s about a 1990s ponzi scheme where they sell household products. It’s really good and weird. 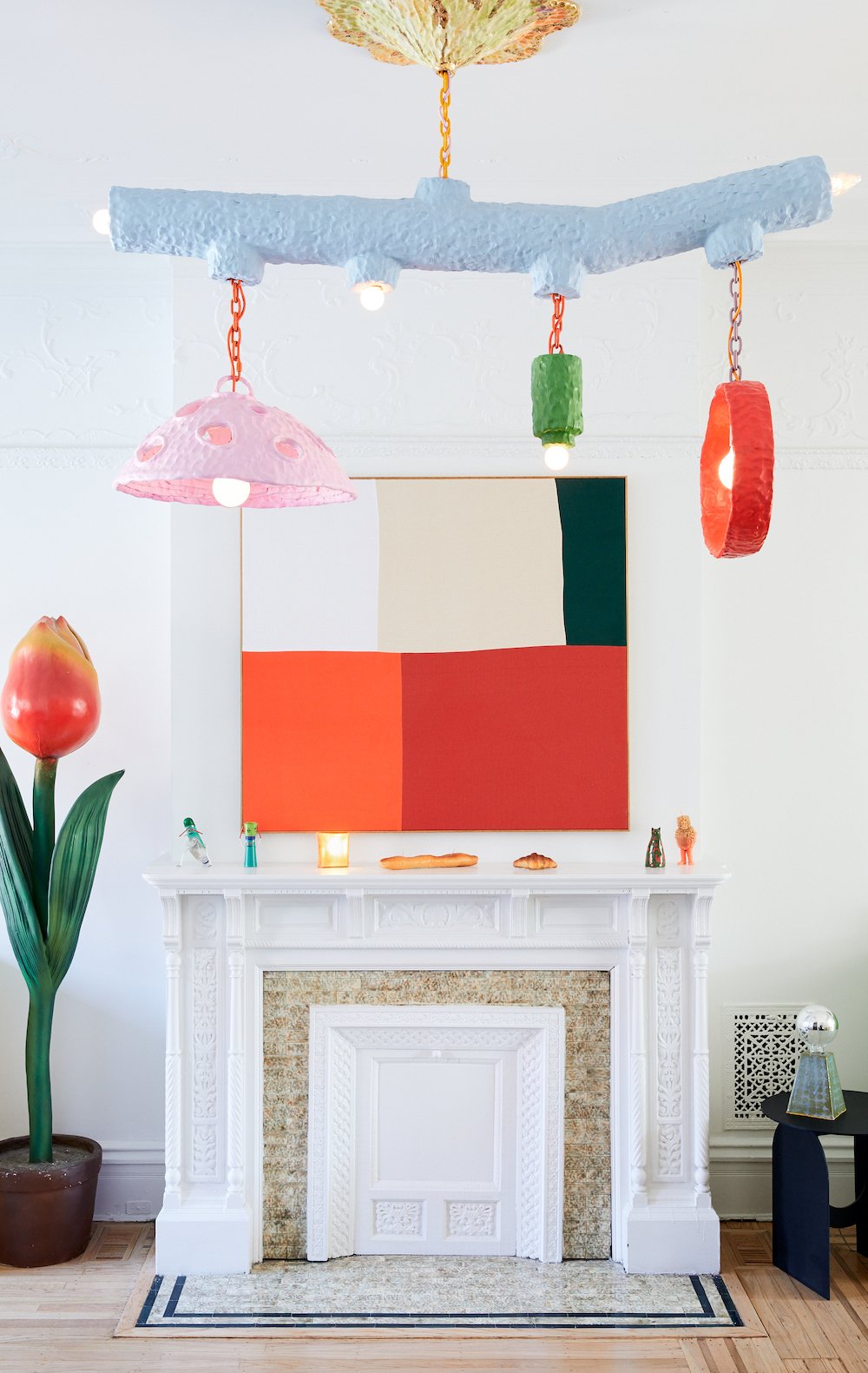 On a signature ceiling light: My designer friend Katie Stout does a lot of weird, lumpy, colorful stuff. I asked her to make me a light, and she sent me a basic line drawing of what it would look like. Then I didn’t see it until it was finished. It was a great reveal! 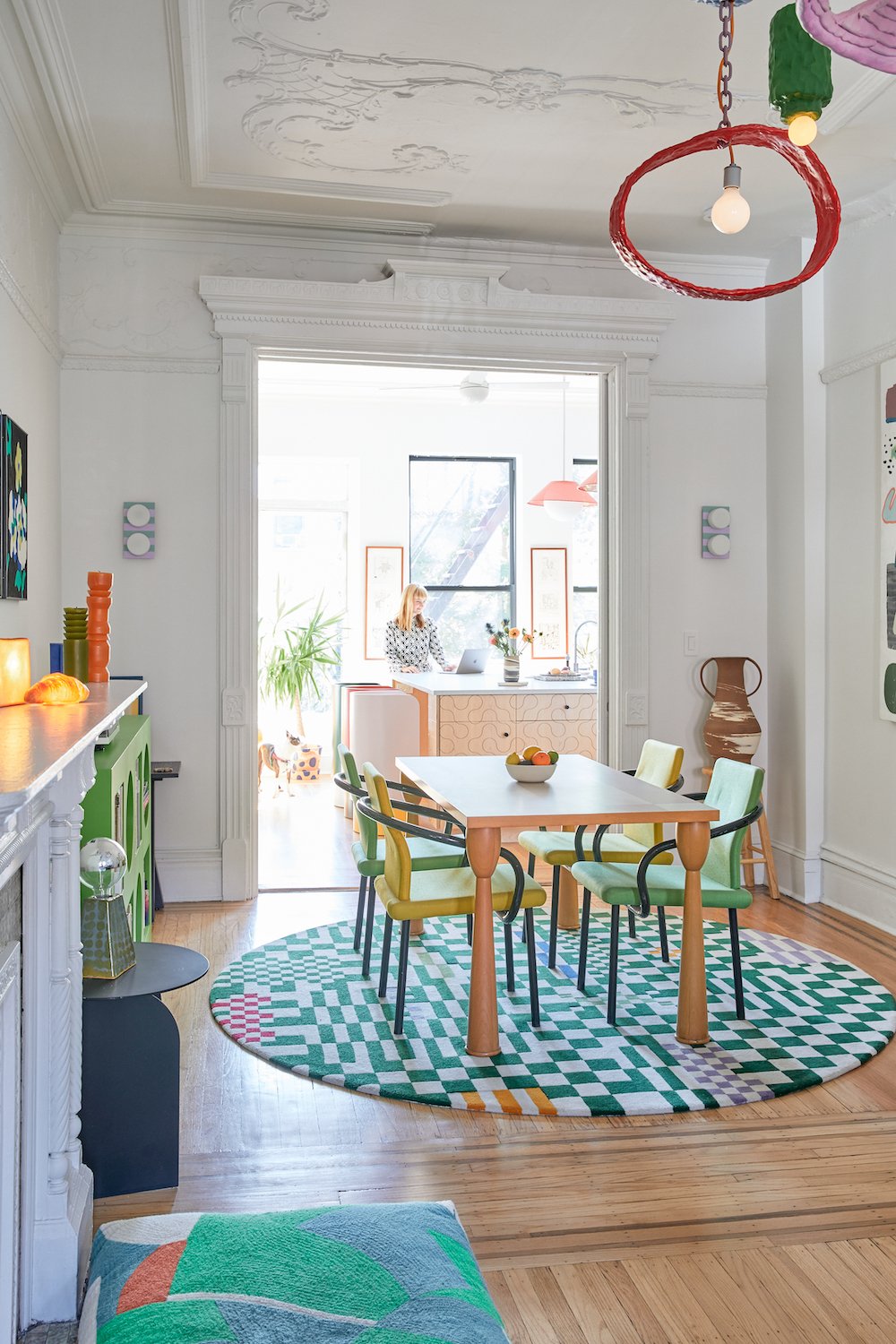 On entertaining: When I have friends over, I love putting out pickles and pistachios. Then I make stuffed pasta shells that are very decadent and tasty. For dessert, I love Flavor Ice popsicles. 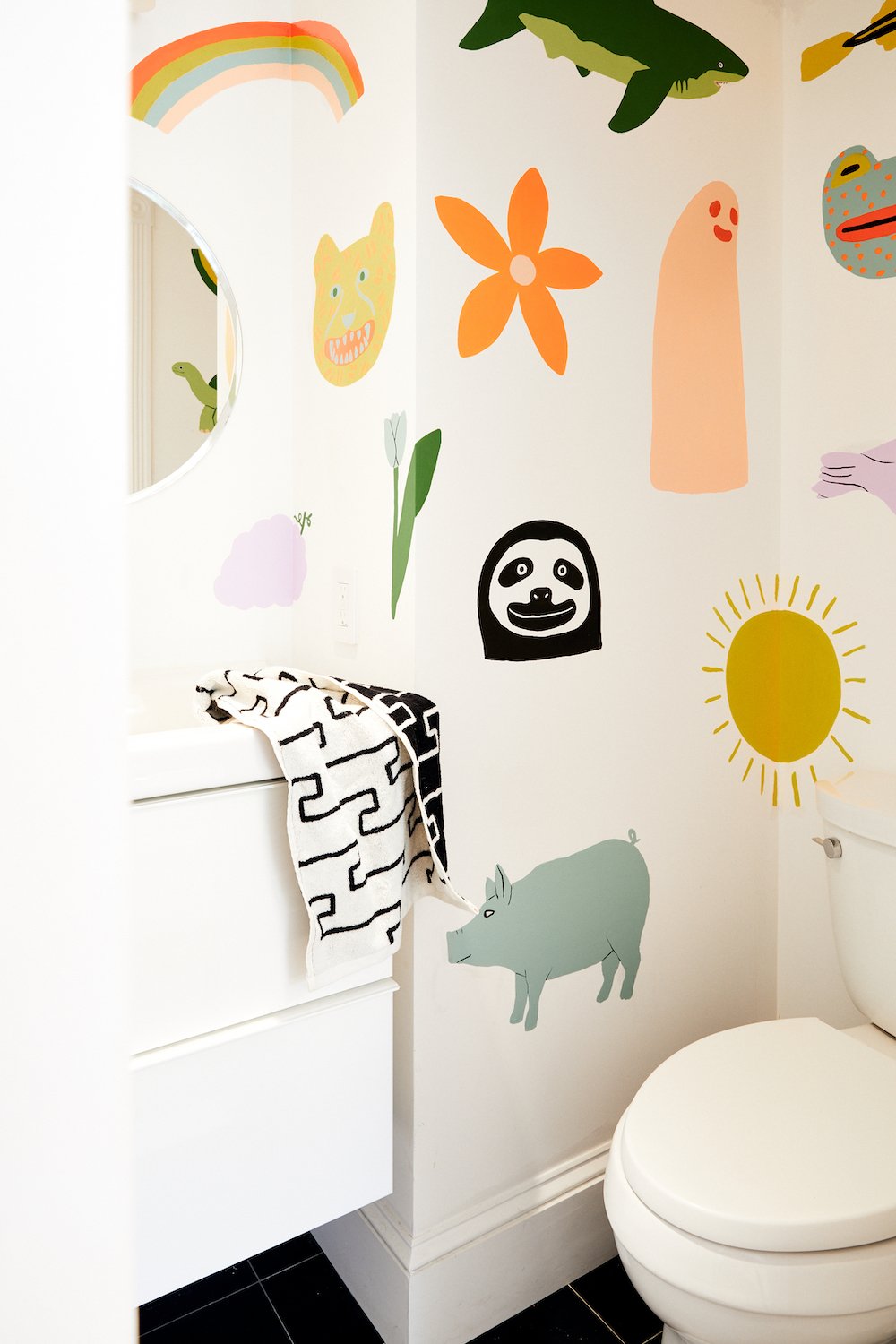 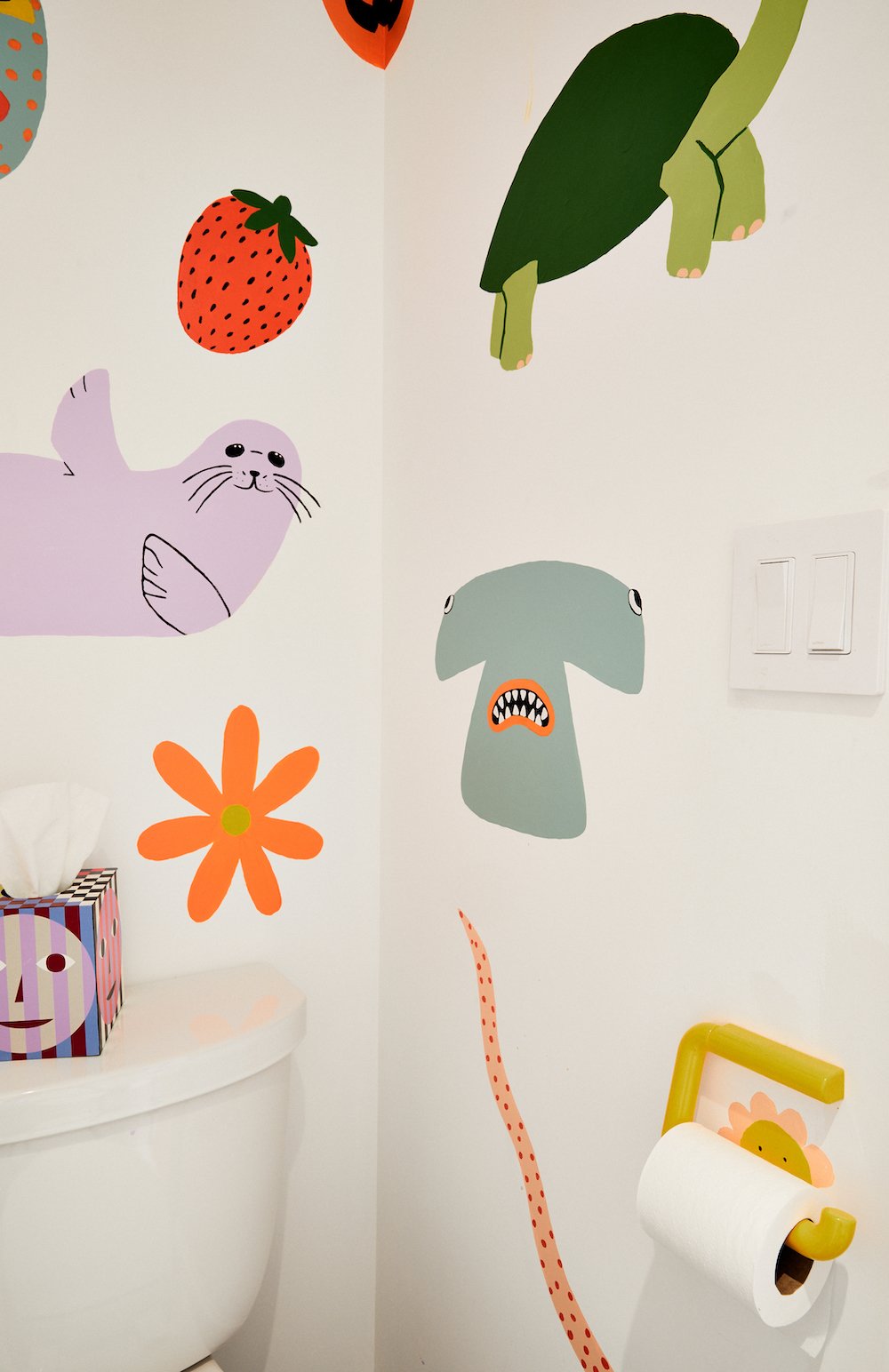 On a playful bathroom: I wanted to do something funky in this bathroom. The artist Lorien Stern, who makes a lot of shark heads and clothes with animals on them, spent three days painting the characters. We talked about which animals and flowers and things to do. We obviously had to do a watermelon and a shark. The waving seal above the toilet is really cute. 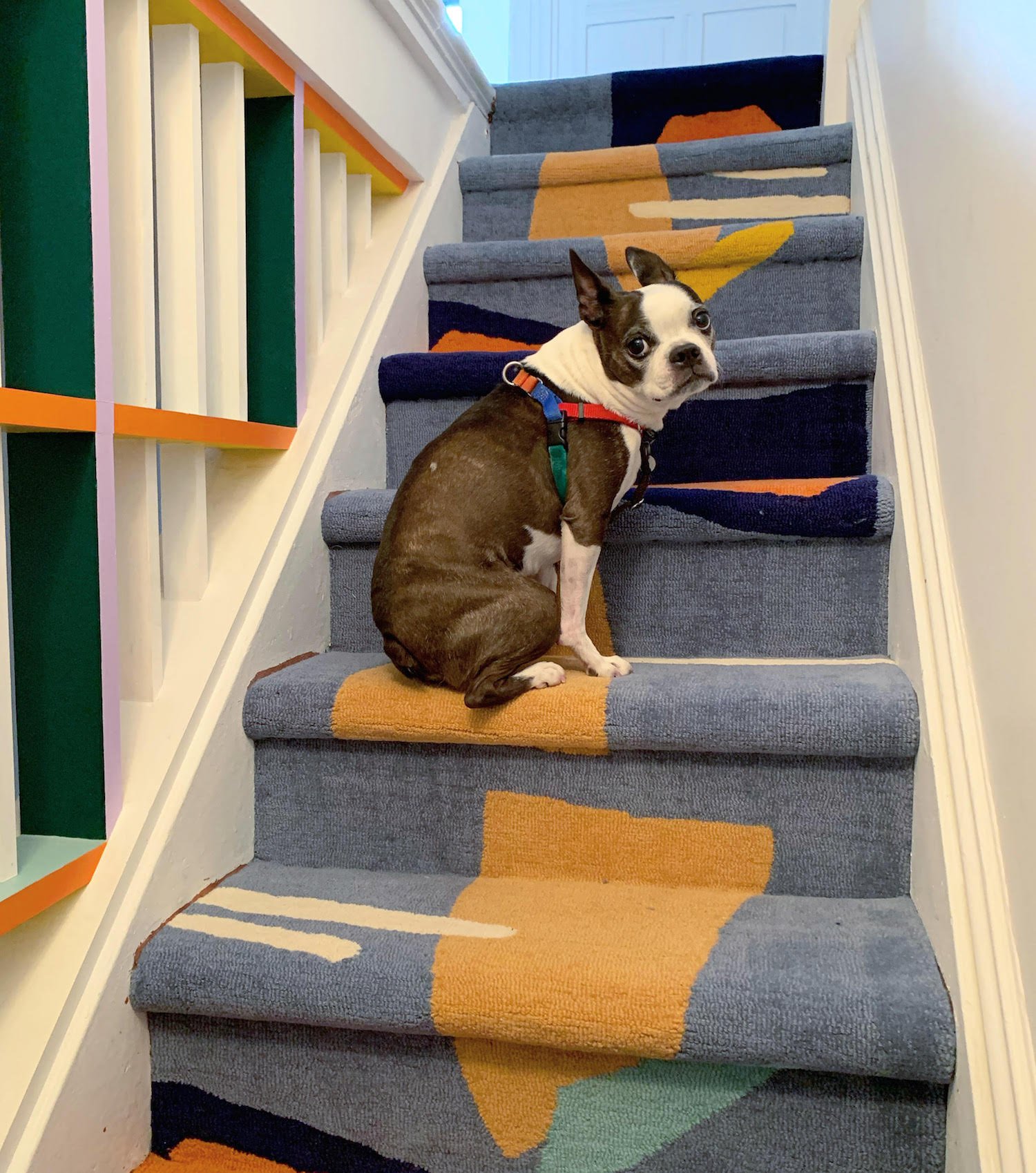 On a colorful stair banister: There used to be a wall next to the stairs, and we took it out. My architect dad sent me a drawing of a standard railing, and I was like, dad, come on. Then he sent me a drawing of what it is now, and I was like, dad, you’re insane! My dad was like, what if we did this railing so you see four different views depending on which direction you’re walking in? So, you see different color combinations when you’re walking from different angles. Choosing the colors took a long time at Home Depot — it was definitely a puzzle! 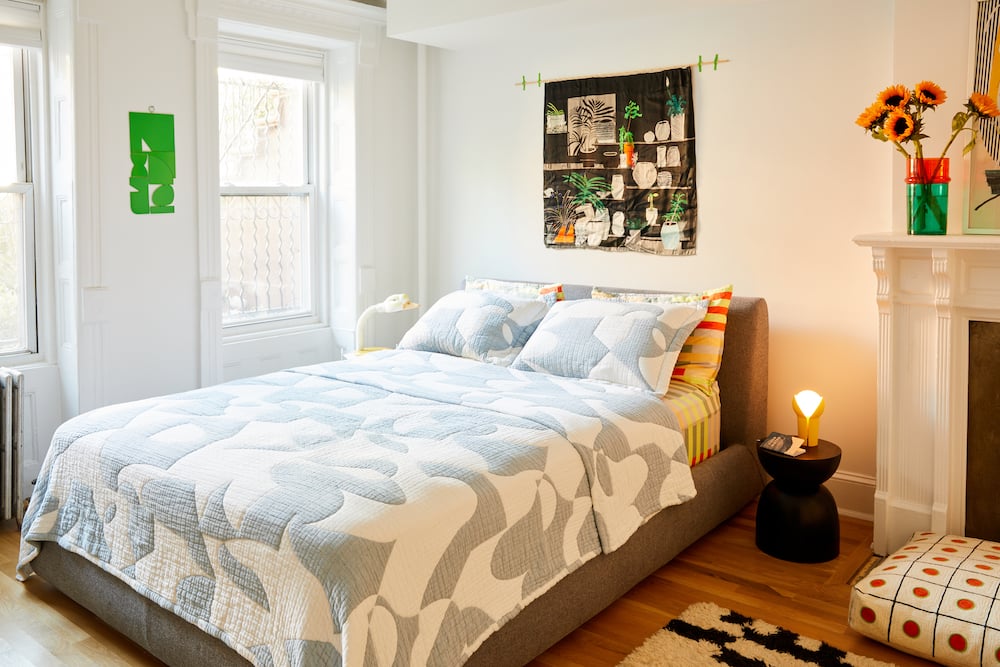 On a connection to color: I feel at ease when there’s a lot of stuff in my visual field. When I’m in a hotel that’s really minimal, it makes me nervous. 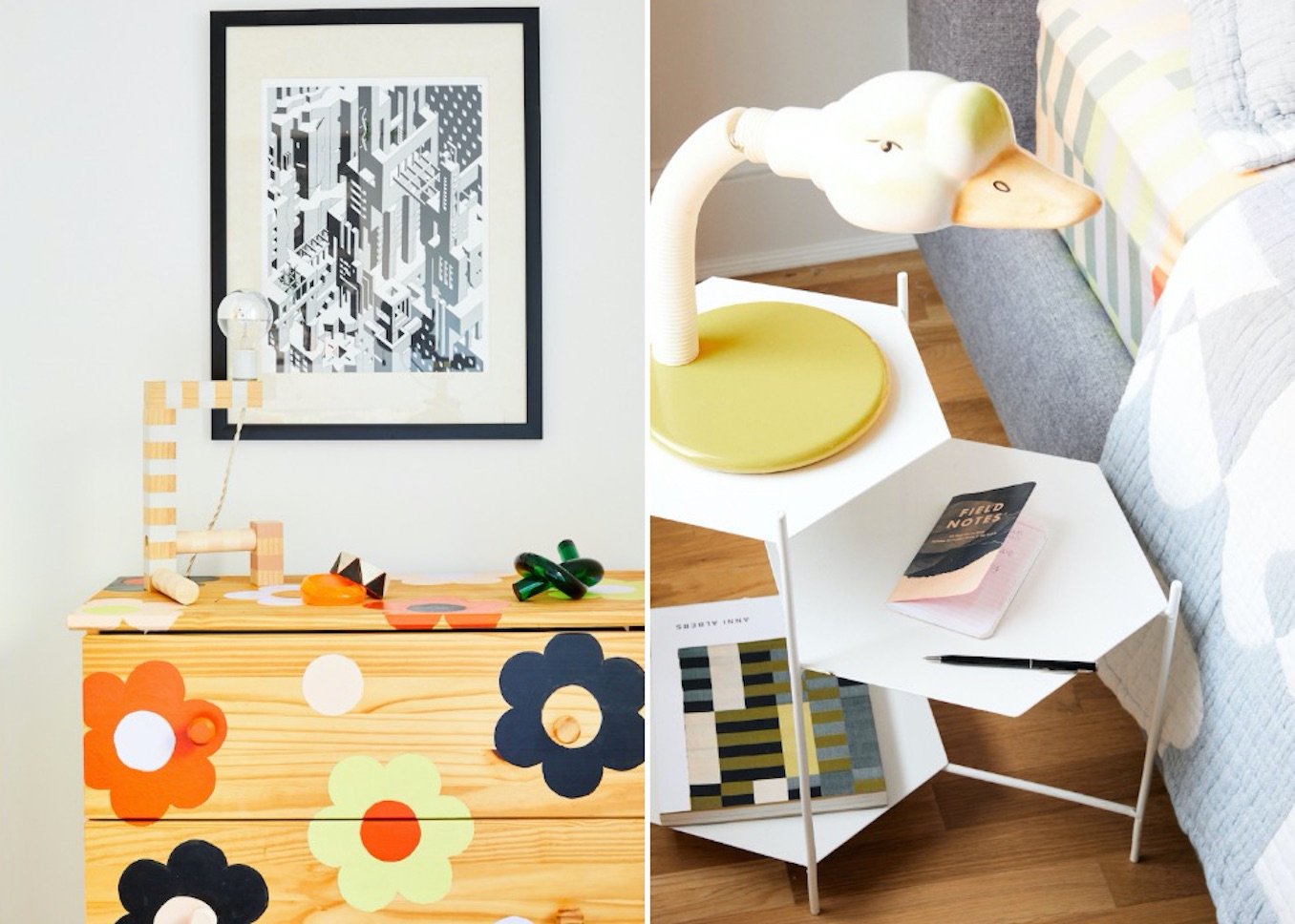 On a DIY bedroom dresser: This is an old IKEA dresser passed onto me from my brother. They have really nice wood stuff. I painted flowers on it because it needs some flair. I used a roll of tape to paint the circles. 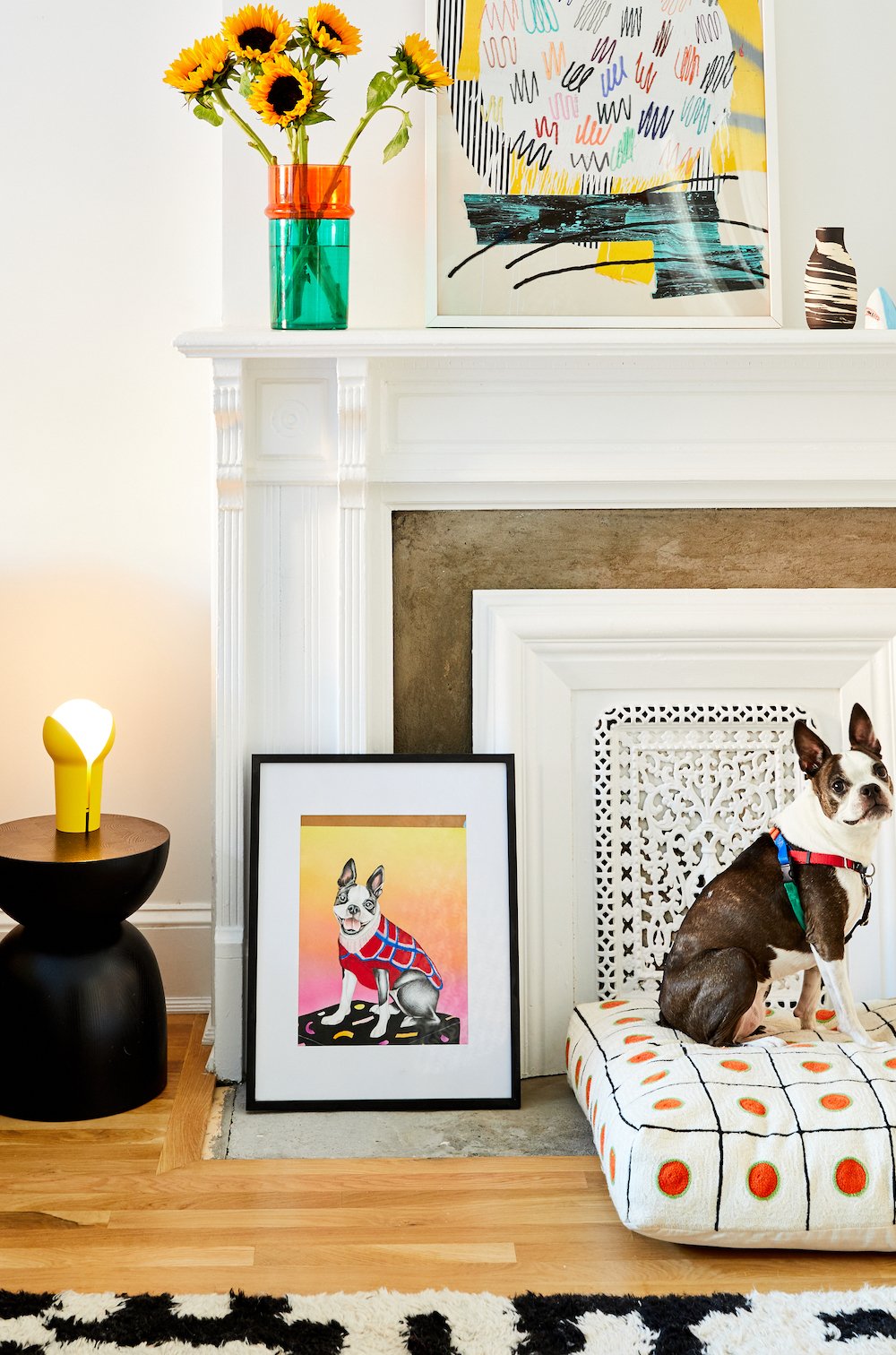 On a beloved dog: Snips is about to turn nine, and I’ve had her since she was five weeks old. Our favorite time of year is the dog costume contest in Fort Greene. This fall, Snips was kale and I was a carrot. Last year, my friend Helen was a vacuum cleaner and her dog was a dust bunny. People go nuts for it. 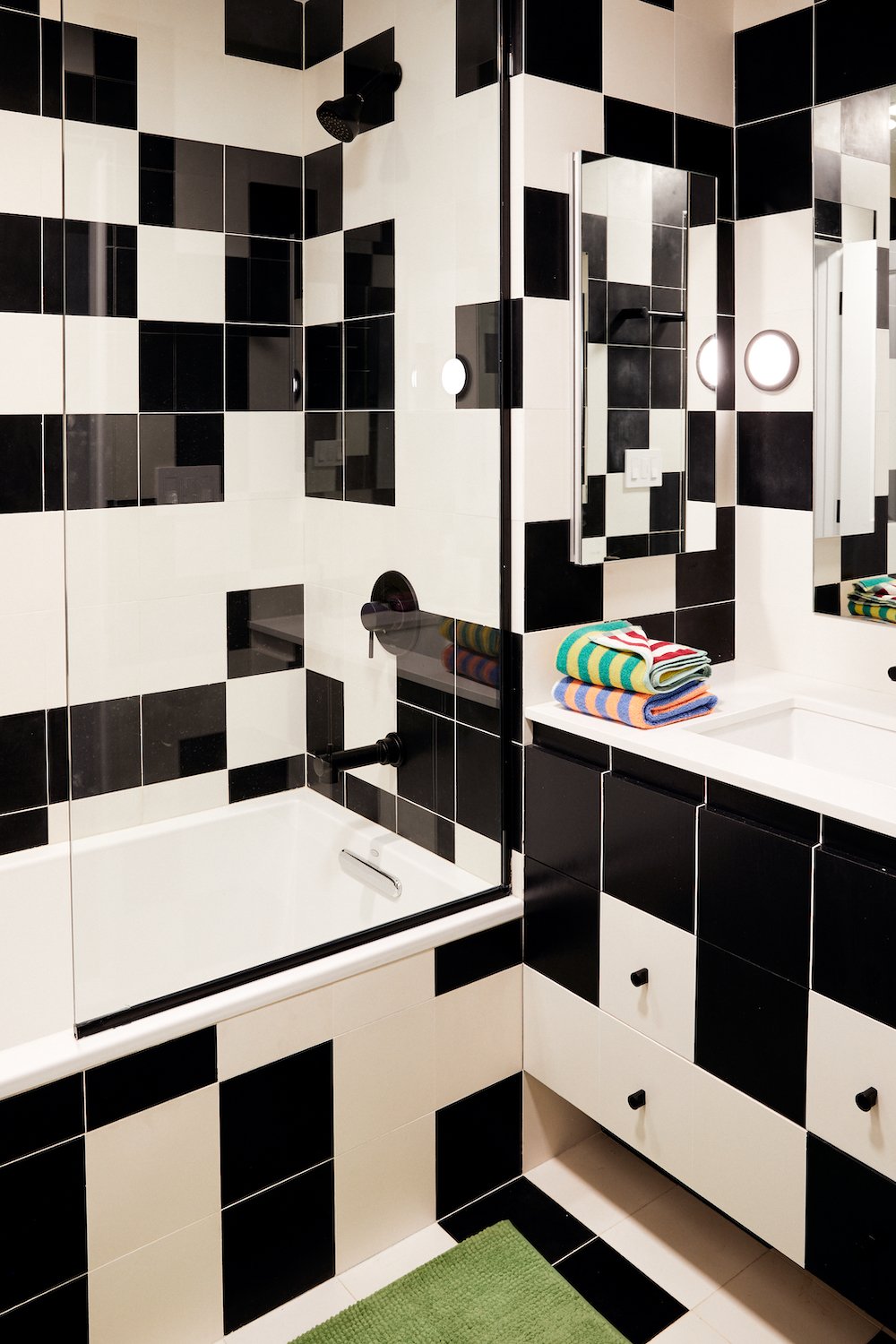 On a personal pattern: The artist Francois Morellet did a series of paintings where he went through a phone book and assigned red to odd numbers and blue to even numbers, so I did a similar thing with my bathroom tiles. I looked at the contacts in my cell phone and assigned white to even numbers and black to odd numbers. There are different areas of the bathroom for different people — New York friends are on one wall, friends I grew up with are on another wall, my family is on the floor. I told the friends whose numbers were part of it, and people were like, ‘Weird!’

On settling in: I think I’ll live here forever. I can’t imagine doing it all again!

Thank you so much, Ellen!

P.S. More house tours, including my grandmother’s house in Cornwall and a downsized family home in Sacramento.

(Photos and styling by Alpha Smoot for Cup of Jo.)

Me too! I wanna know this!

this looking great and this is really helpful for me and also for my upcoming project as well so i hope you to add some more in future also. so thank you once again for sharing

i love everything about this. Hope you add this in future also

I’m so inspired by this home. We are in the midst of piecing together ours after a house fire. This is what I needed to see! I‘ve admired her work for so long and she’s created a fun and unique home.

I’m curious about such a basic source, but any idea about her countertops? They are almost white but not quite. I like them.

Me too! I wanna know this!

This is an insane mix of sophisticated and childish and I LOVE it. My house will never look anything like this, but that’s ok. Thanks for sharing. Interesting comments and things to consider, too. Thanks COJ!

I don’t think I’ve ever NOT loved a cup of Jo house tour, but boy was this one extra delightful. My favorite thing about these is that I feel like they give me permission to be bold in my own style choices. I find myself reading along and saying, “you can do that?!” But of course you can. There is nothing better than entering a home that tells you who the person is right when you walk in. When you share who you are through your aesthetics, it’s not only good style, it’s a gift to others. I love that.

I love her. You can tell she has a smart, unusual brain. I agree that things made for children are better than grown up stuff, esp. home decor. The pickles, pistachios, pasta, popsicles party made me laugh. So did “oh no I have to have that tulip what do I do.”

Also “I also used to be in a shark club with my friend. It was just two people.”?

Where is that red kitchen ladder stool from? I love it. Beautiful home!

My favorite home you’ve featured by far! So much fun! Do you have the source for the set of jars on the kitchen counter by chance? x

were you ever able to find out? such a small detail, really love it!

Her creativity is boundless! And I love seeing people who inject joy into their surroundings and don’t take things overly seriously

How fun! I love to see a stylish but not too serious home. It looks like a place you’d want to be invited for many dinner parties!

I love sharks too, and have little nods to them all over my house! I love that she unabashedly fills her home with the things that make her happy. Your house should tell the story of who you are and what you love. She’s nailed it.

Your home fills me with joy and light, Ellen. Do you.

OH MY GOSH this is my favorite house tour ever yes yes YES. The tulip! Sharks! Colors everywhere! So perfect.

oh my gosh- as a tulip lover, that giant one is AMAZING.

As a fellow Boston Terrier “owner”, i am over the moon for Snips!!! I’m going to look at that face for the rest of the day! (oh, and nice house).

Love this! Are they willing to make the amazing custom book case for others? If so could you provide information?

I too, feel a great desire to have that tulip in my home. I would love to know, is all the incredibly ornate crown molding original to the home? And if it isn’t, where did source it from? I love the combination of her young, delightful style against the proper & romantic molding.

Her house is so lively and fun! And as a fellow Boston Terrier owner, I love her pup!!

This place is AMAZING! I love it so much, thanks for sharing! Definitely one of the more interesting, unique, and inspiring homes I’ve seen. I relate to the loving children’s stuff thing too, but haven’t given in to that as much myself — makes me wanna reconsider

I work in climate policy and am thinking constantly about the ways that material consumption exacerbates the present crisis, and I actually took away a very different message from this home tour! Ellen obviously put tremendous thought into every detail of the space, with the goal of living in/among the design for a long time. She even says explicitly at the end that she thinks she’ll live there forever! Looking at our physical possessions as long-haul investments, rather than things to be swapped out in a year, is about the most climate-positive way to approach design.

So fun to see this! It feels like the current trends fall into the same rather bland color palette – this was a joy to see! I loved the whimsy!

I LOVE this apartment. And want everything she makes!

Maybe one of my favorite tours ever. I have a childlike sense of style, too, and every corner of her space really speaks to me and makes me excited to look at my own house again for a way to use shapes in a more playful way.