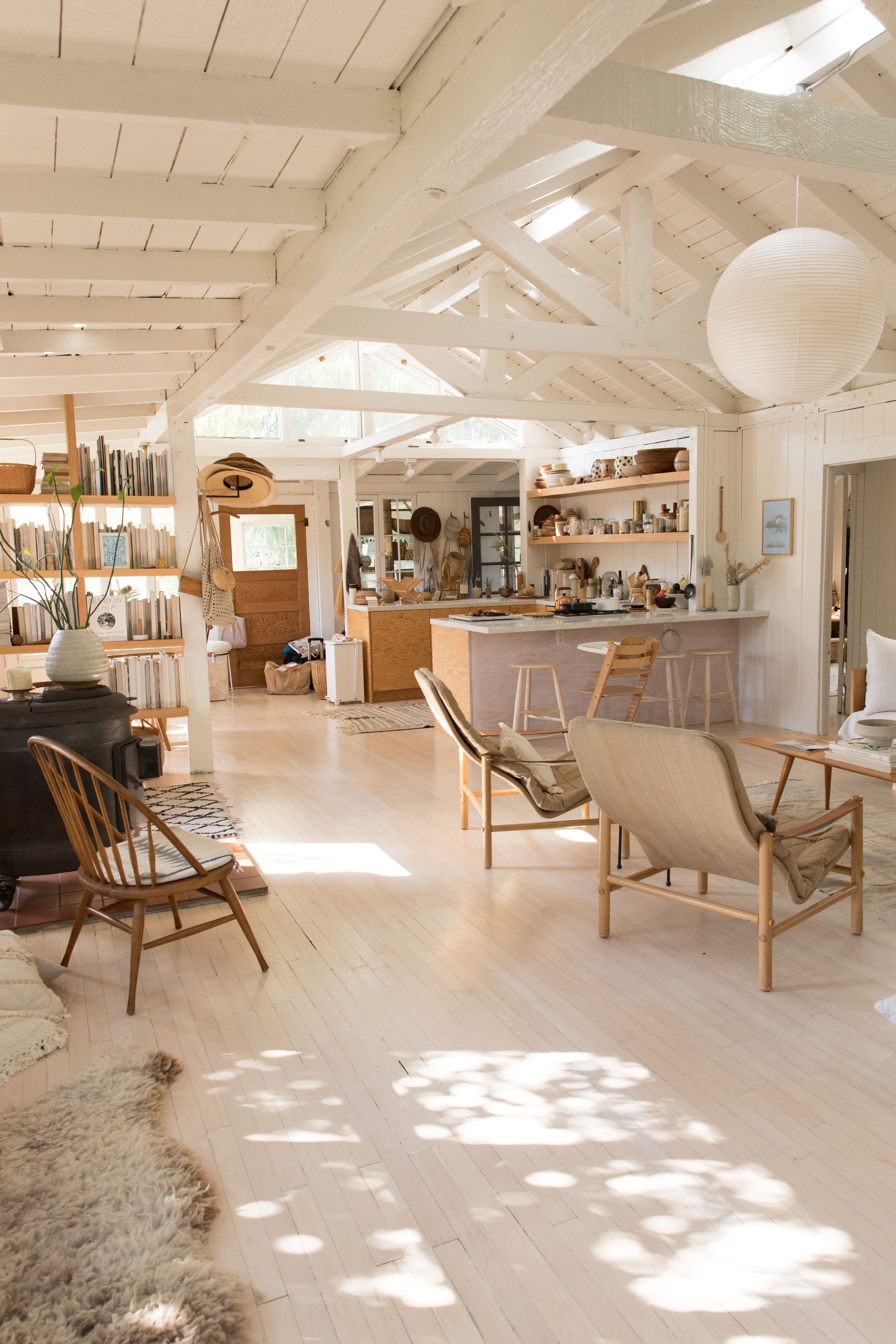 Serena Mitnik-Miller, co-owner of General Store and author of the beautiful book Abode, lives with her husband Mason St. Peter and two children in Topanga, California. “The cabin is almost 100 years old,” she says. “We see coyotes, deer, bobcats, snakes, lizards and hawks.” Now that the family has welcomed their second child, we are excited to share a tour around… 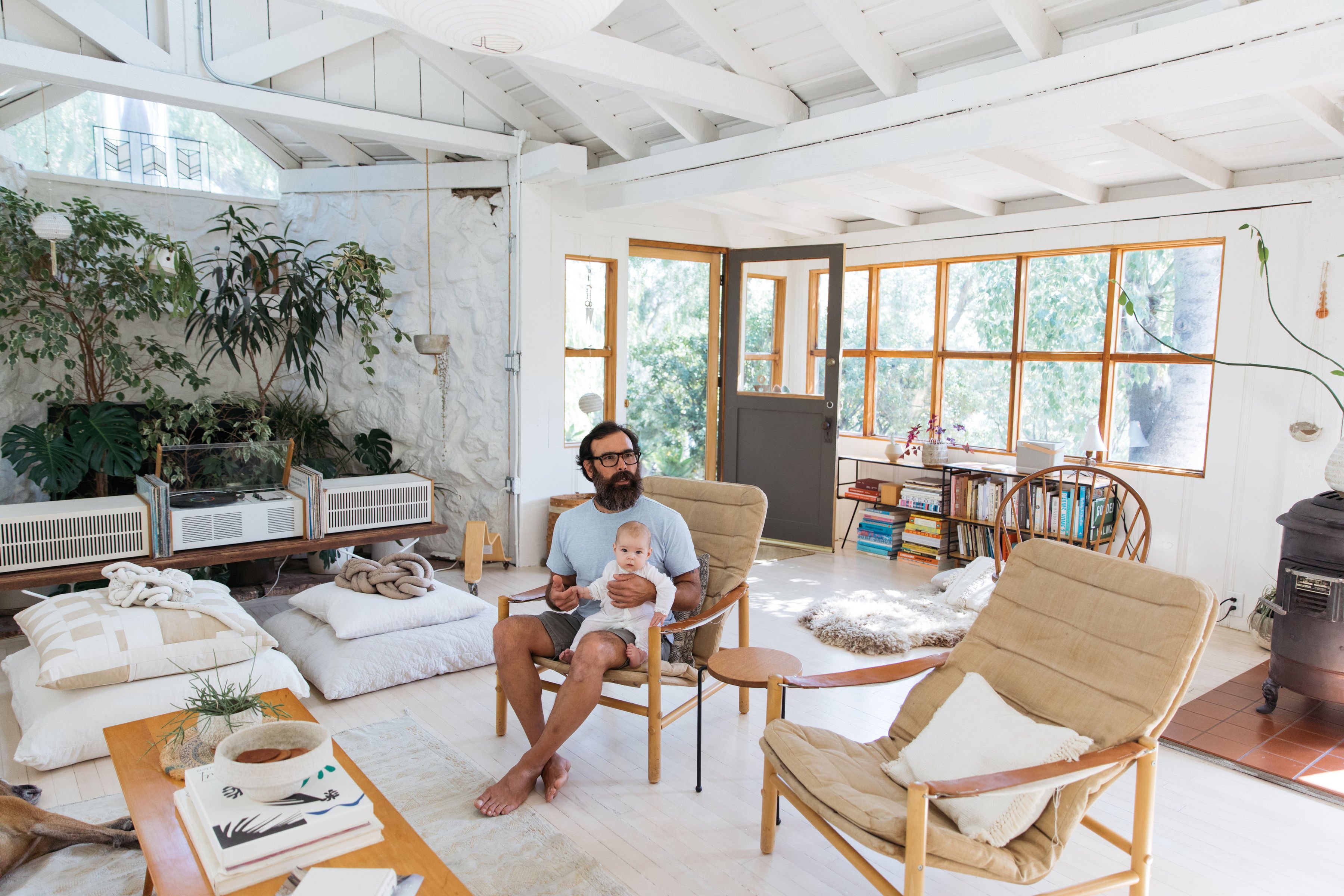 On living in Topanga: Topanga is a little oasis, you can get lost here. Working at General Store is so full-on that it’s nice to live in a quiet place. We’re half a block from the Topanga State Park. We don’t have much garden at our house, but you can be in the middle of nature in five seconds. 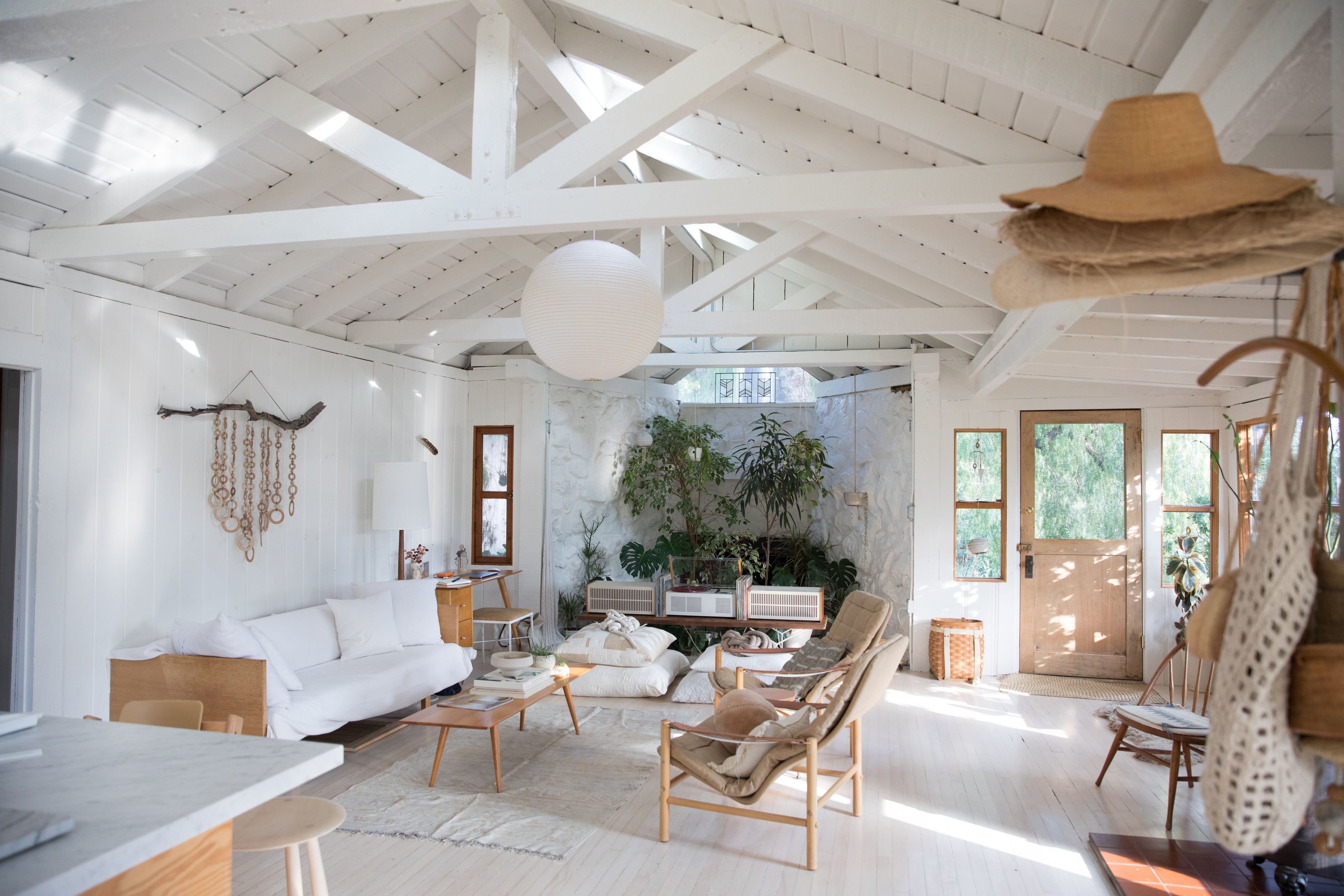 On a family record player: Mason is a music buff. He often plays The Smiths. I’m a little younger so that era missed me. I’m more interested in something I haven’t heard quite so much. I don’t not like it, but it’s kind of like Seinfeld — it’s good, but you’ve seen it so much that you’re like oh-kay. Alone Again Or, I never have to hear that one again. 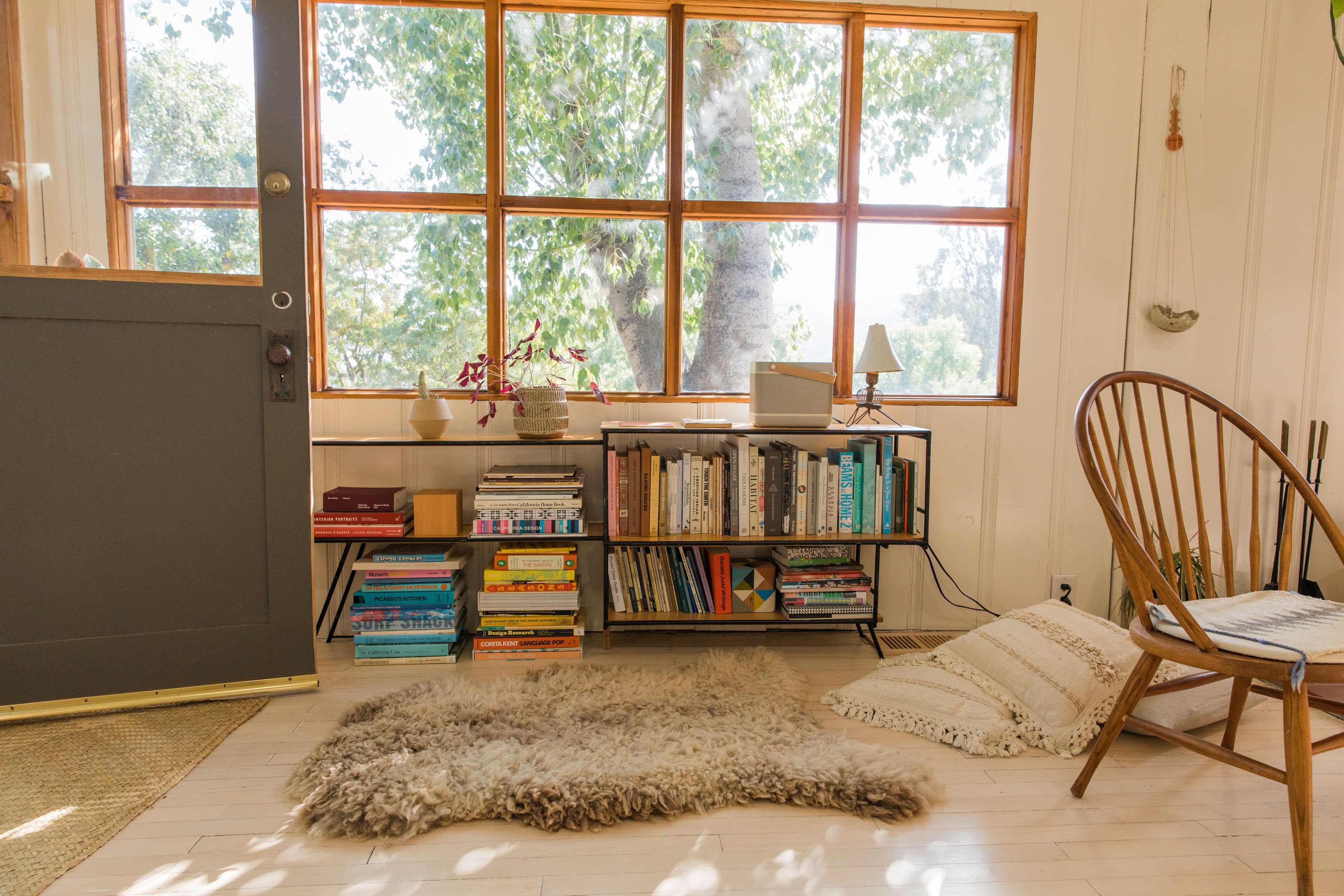 On a cozy sheepskin: We have a really old dog, so we move the sheepskin around to accommodate her. We lie on it, too; it’s everyone’s cozy spot. Wild also rides his scooter and runs around here since it’s the biggest open space in our place. To be honest, all surfaces are usually covered in trucks until the evening when we put them back in his room — and we start over the next day! 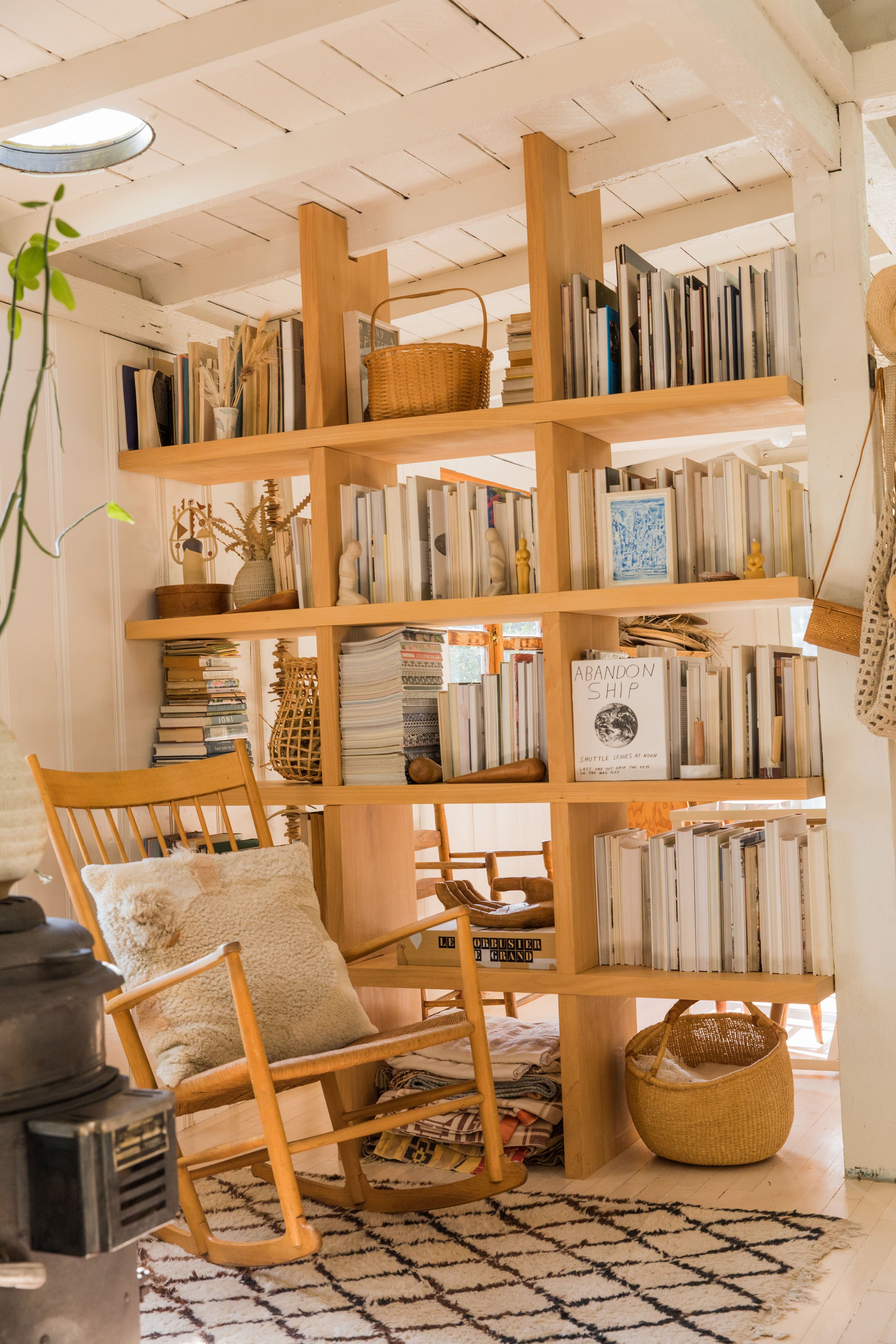 On nautical touches: The skylights were made with glass from boats — they were there when we moved in. An interesting Englishman named Timothy owned the house before us, and he did a few things that were really lovely. We kept all of his contributions. 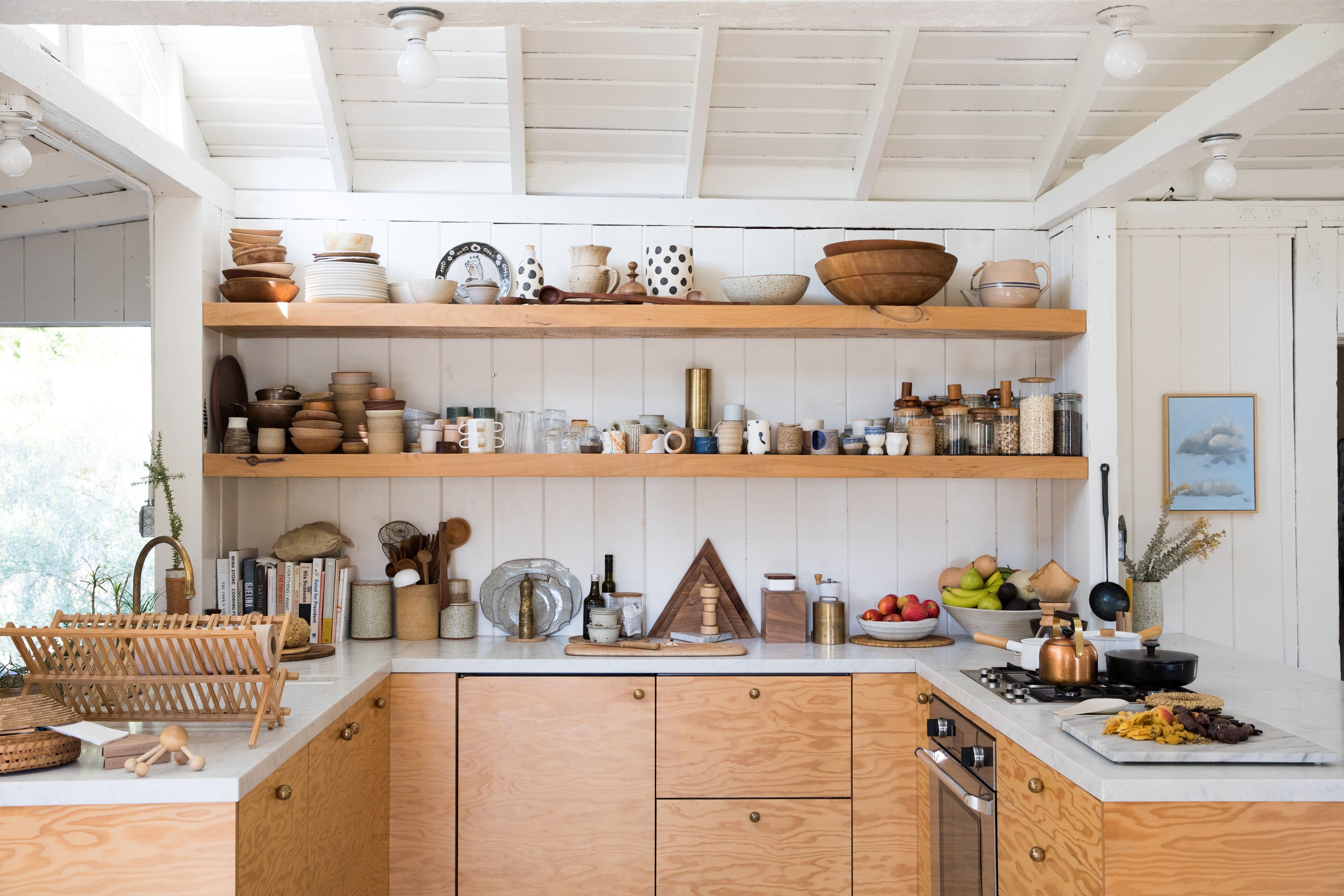 On a ceramics collection: At General Store, we work with many ceramicists making beautiful things. It’s hard to be like, I’ll just have one small set! We’ve developed this crazy mug collection — it’s always evolving. Our main set is Heath, and I have a special place in my heart for Julie Cloutier. My other faves: Humble Ceramics, Victoria Morris makes wonderful lamps, and Michelle Blade does hand-painted blue-and-white pieces with characters. 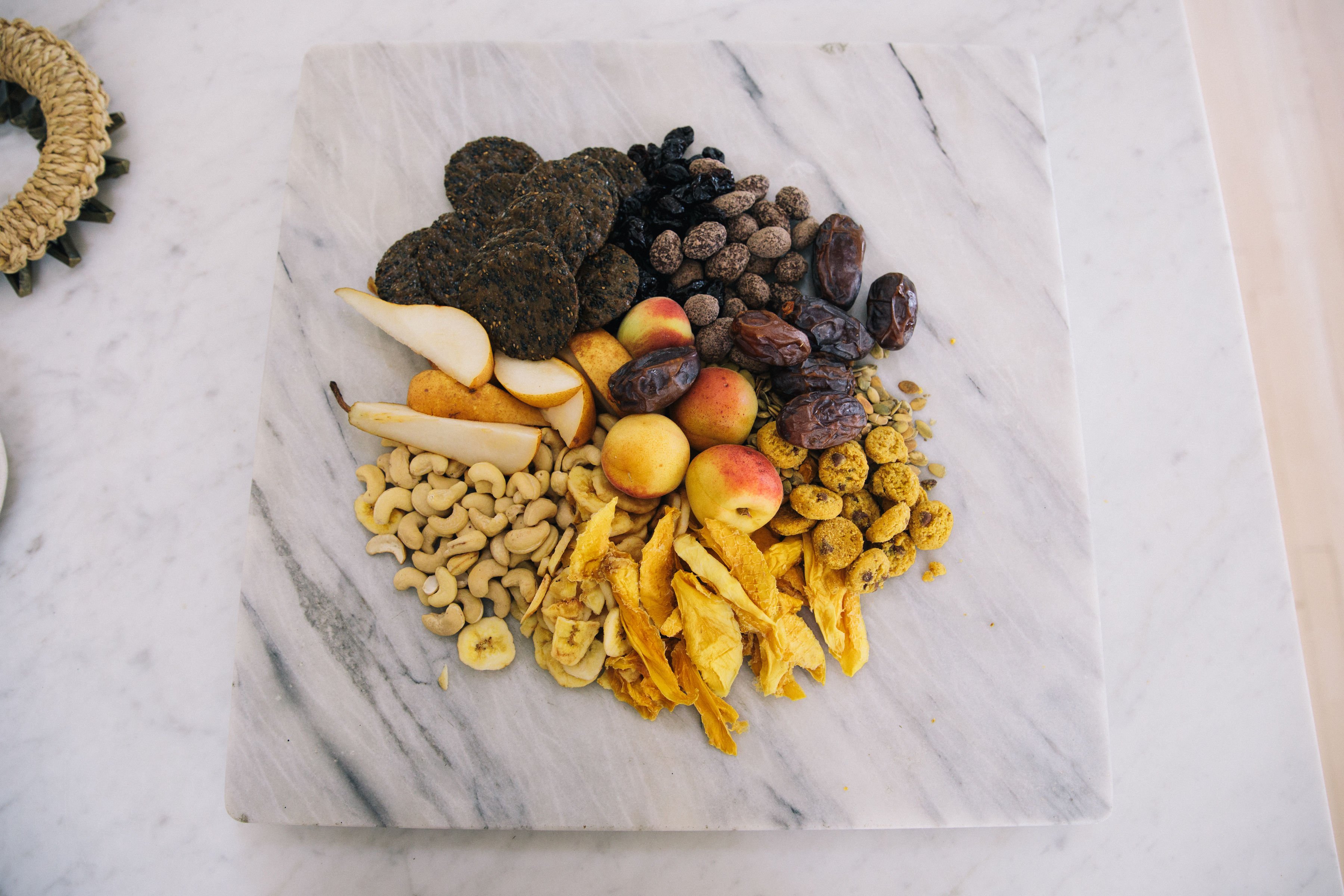 On snacks: I’m a big snacker and always have nuts and dried fruits around. When I was pregnant with Una, I was hypoglycemic and became a person who always needs to be eating something. 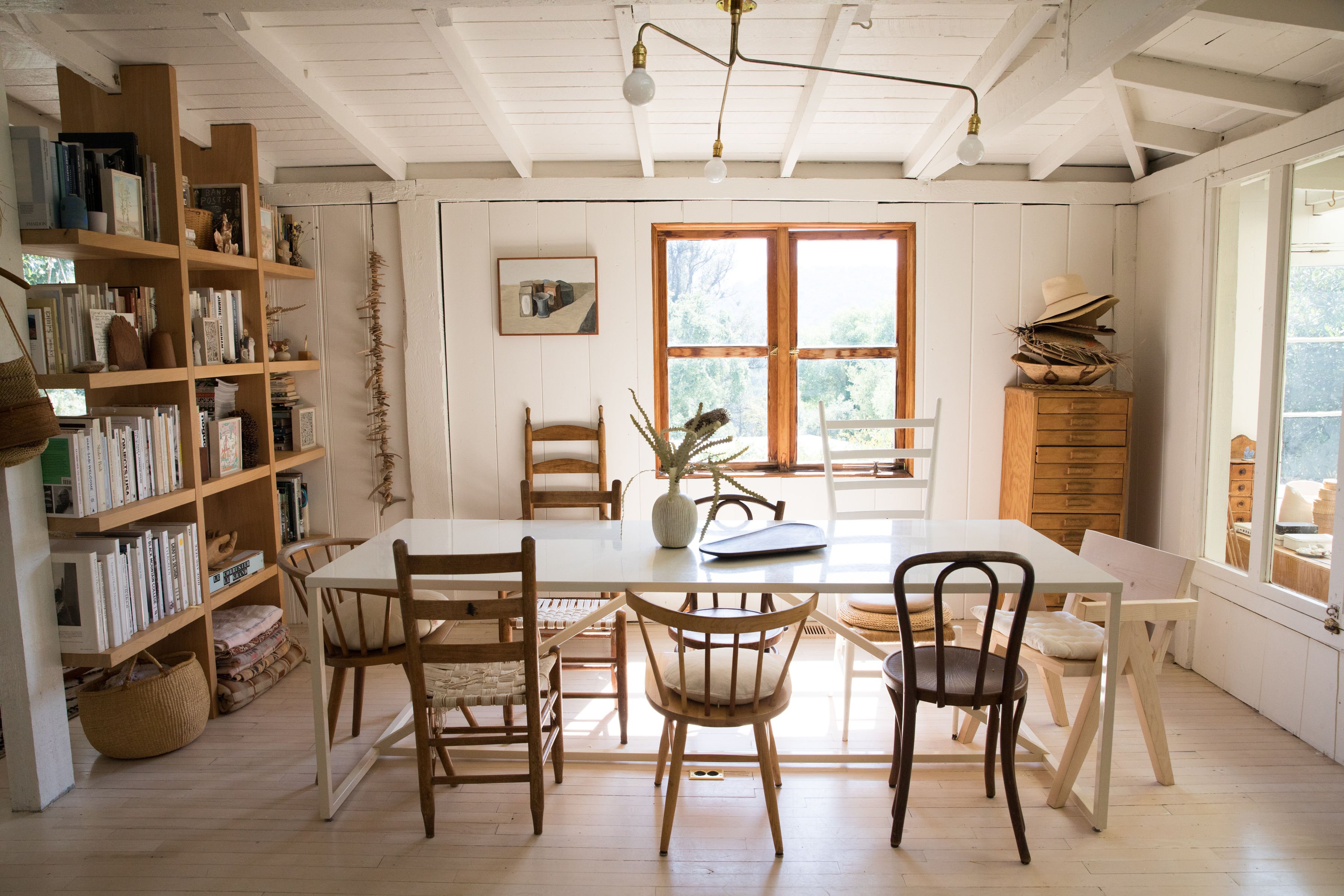 On choosing family names: My husband Mason is Native American, and our son’s name is Wild Hawk Moon — hawks are Mason’s spirit animal. We also created a new last name for both of our children: Moon. We’re going to change our last names, too. For work, we’ll keep our names for consistency, but on everything else we’ll be the Moons. 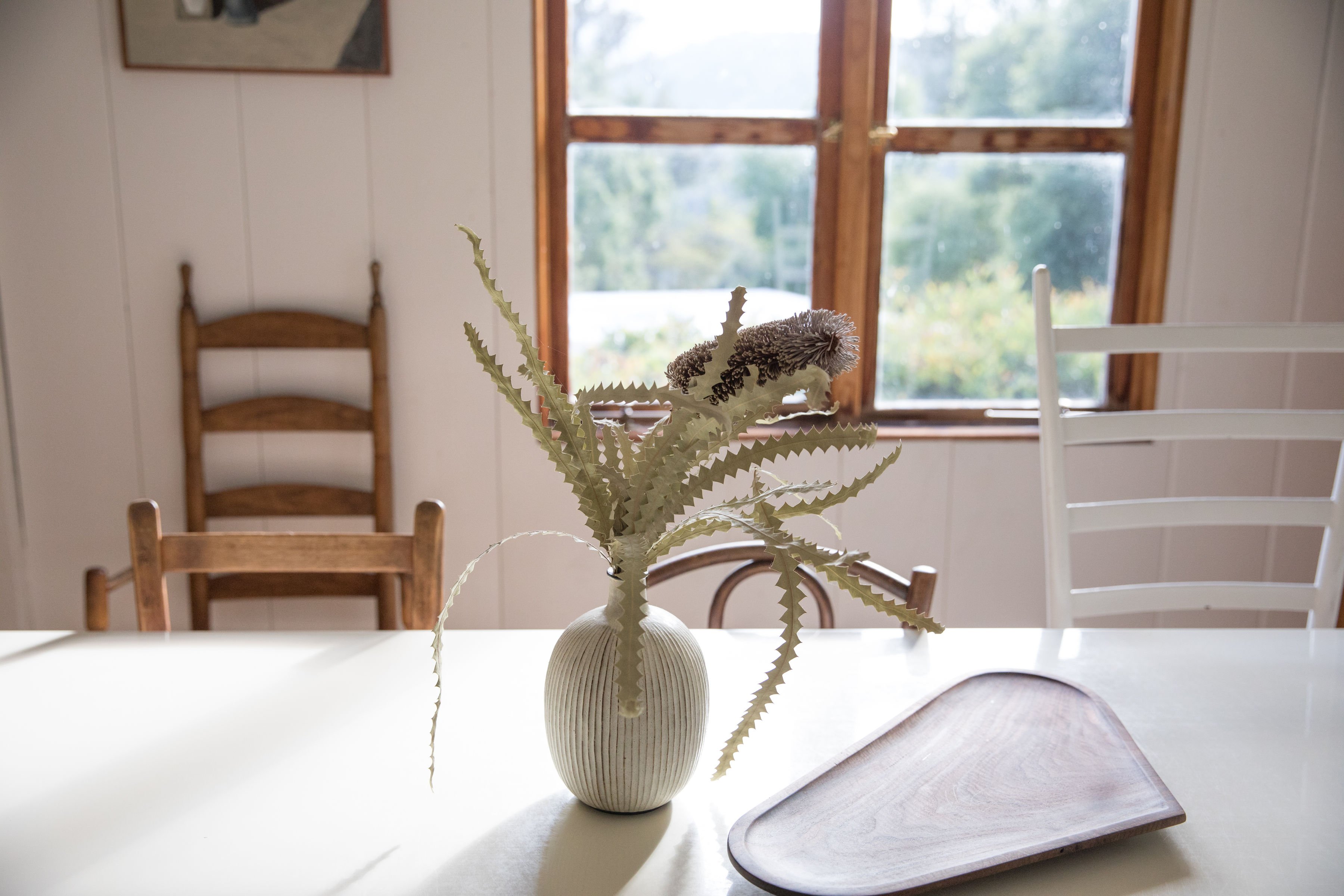 On differing tastes: My husband and I mostly agree on home decor, but not everything. I’ll find chairs for $5 that won’t be his favorite. I always push the limits with chairs and eventually they end up in the garage. Right now, we have the Shaker-looking chair — it’s tall and white. He’ll give little nudges, like he’ll randomly say, ‘If we could get rid of a chair, it would be that one!’ 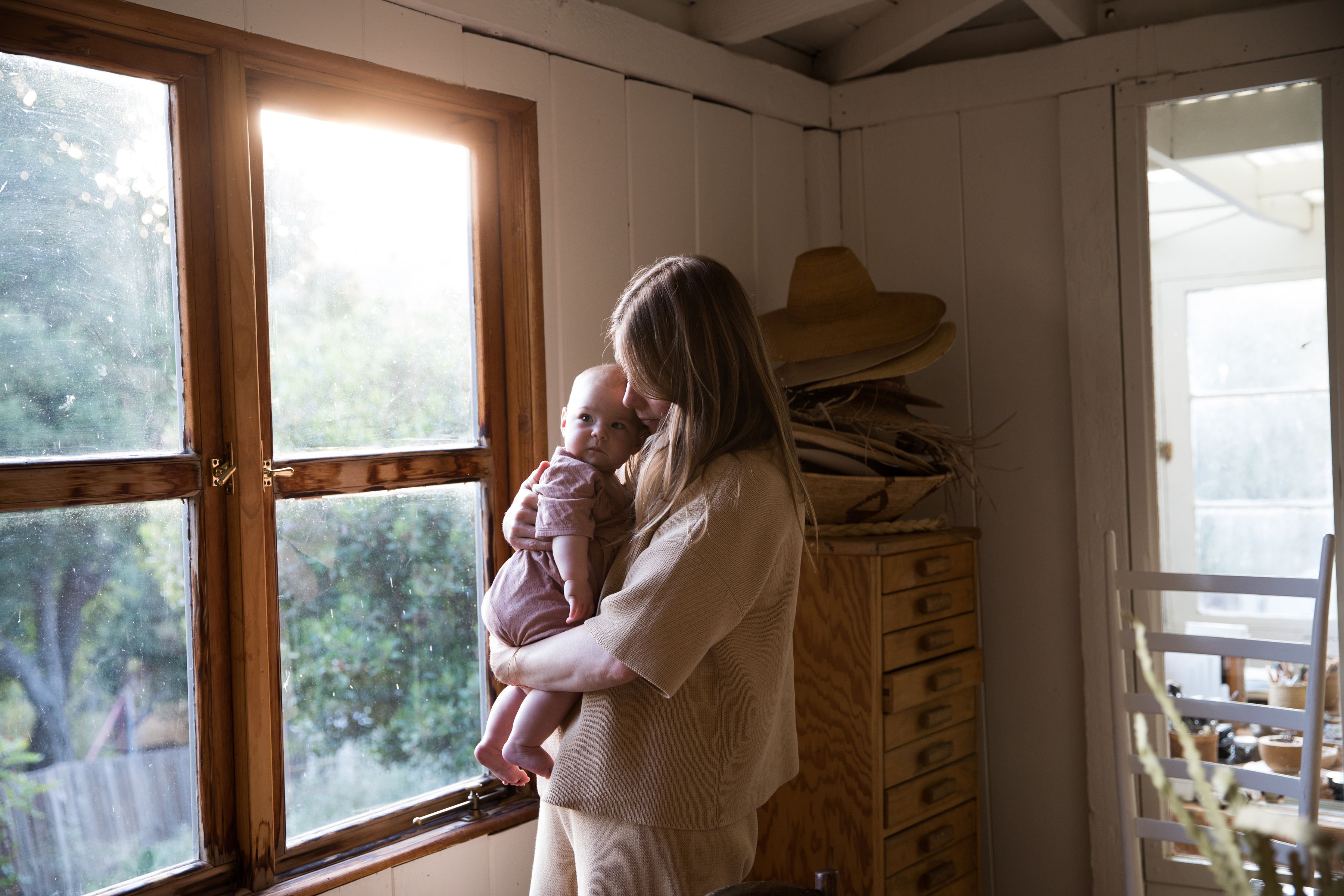 On going from one to two kids: I’m not going to lie, it’s very overwhelming. With a second, at least you’re less freaked out because you’ve done it before. You’re like, I got this, I got this… but it’s A LOT. I was always like, with two, you won’t be outnumbered, but you are still! You can be outnumbered! We are so aware that we are done with two. 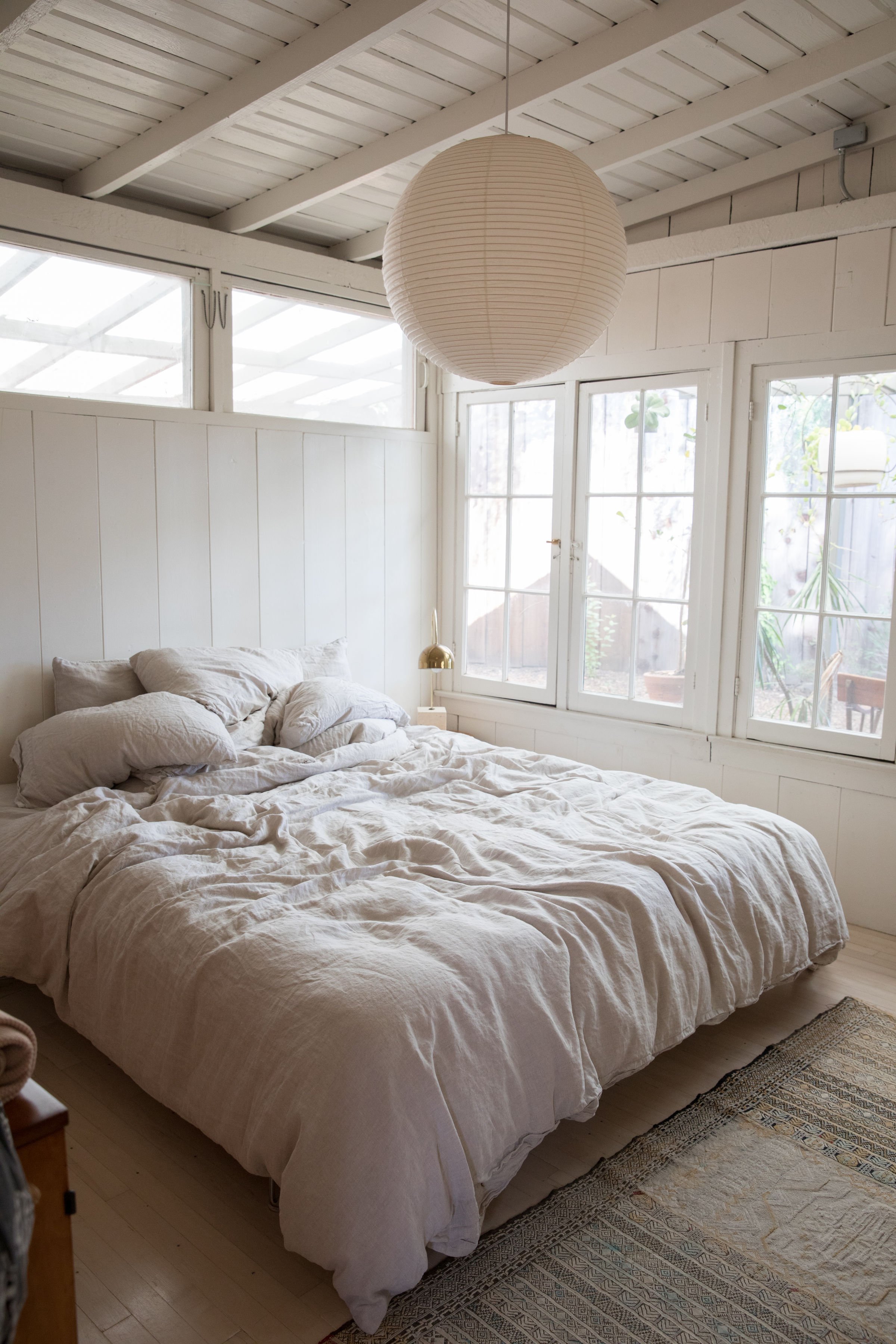 On a family bed: If I want to relax, I go to our bedroom. I’m usually taking care of Una these days or reading to Wild. My husband brings me coffee and toast every morning, so I get to spend a minute longer in bed. Una is always with me, we definitely haven’t separated yet. 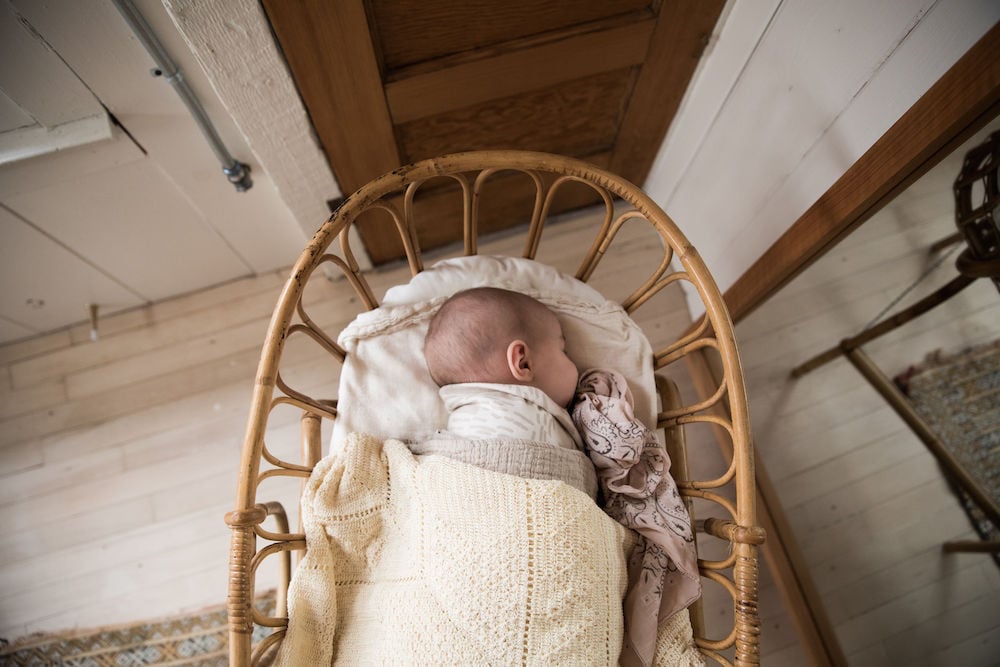 On the color brown: We do have a lot of brown at home! At the store, I’m looking at objects all day; so for our home, we wanted to simplify with color. It becomes the lack of color that I love. There’s a brown tone that I look for — not too bright, not too yellow, not too dark. And I love the natural element of wood and baskets. 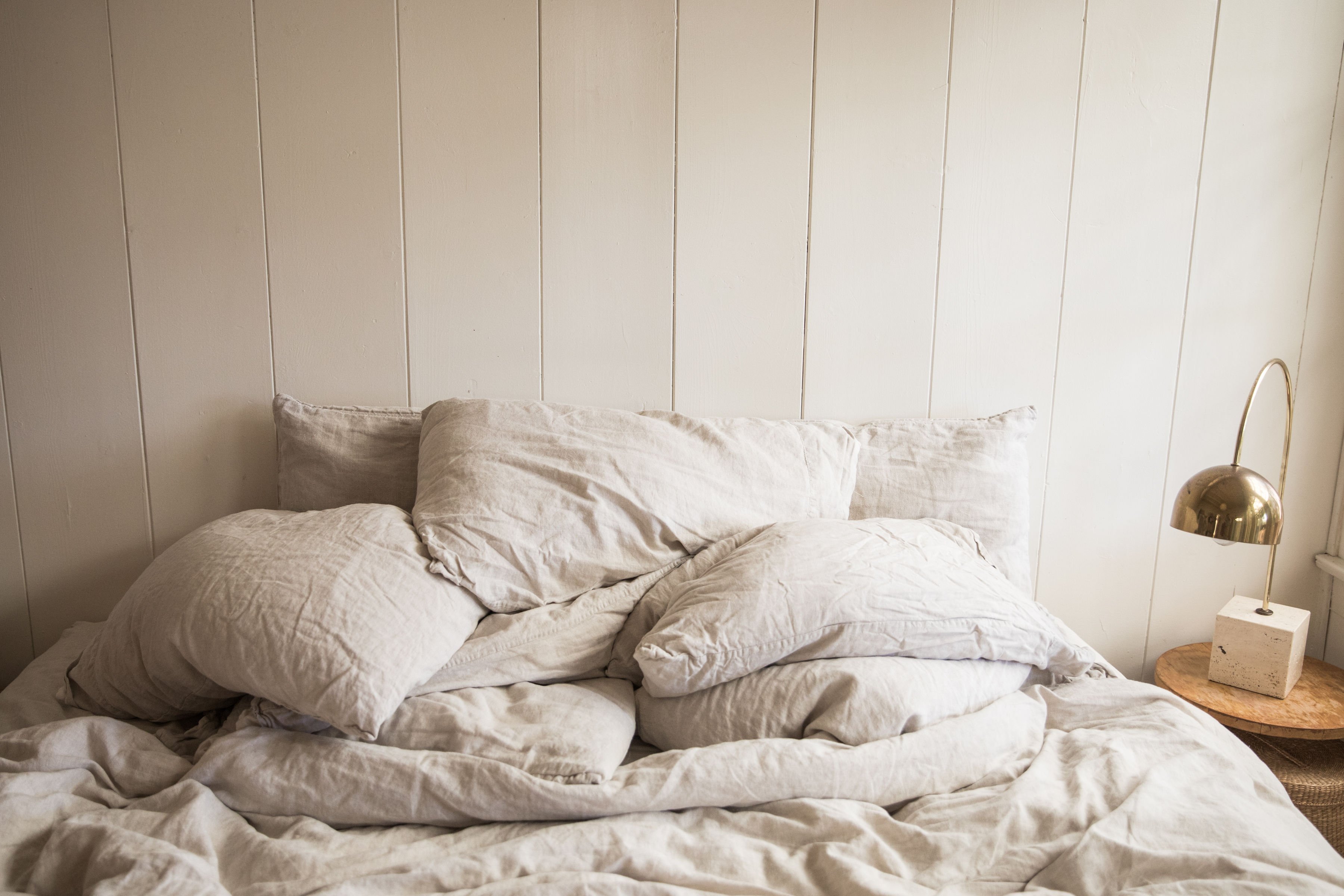 On creating a comfy bed: Linen sheets are our go-to. We’ve tried a bunch, but Coyuchi is our favorite. They’re a little thicker so they take a bit to break in, but then they get really good. And they don’t disintegrate like other linen sheets. We also have tons down pillows, which smush easily. Three is the magic number. 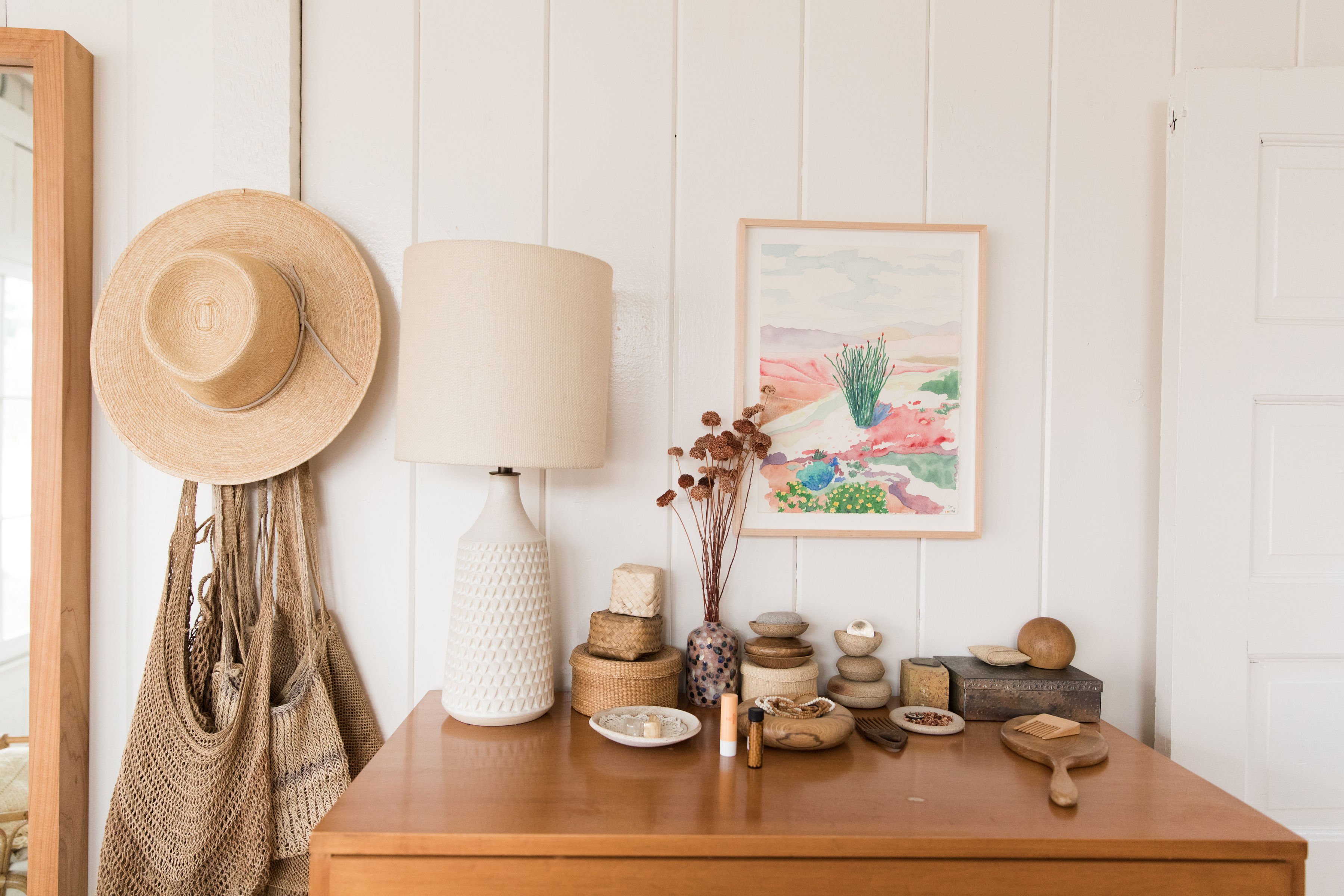 On bedtime laughter: With the current political climate, the news is so heavy and it’s hard to digest, so I mostly listen to podcasts while driving; I can handle it in that form because it’s less repetitive, versus the news when it’s circling through over and over. We also watch shows after the kids are in bed — usually Kimmel or Fallon and I’ll be asleep in 10 minutes. It’s nice to spend a few minutes listening to people making jokes. If I can laugh before going to bed, I feel like that’s the best thing you can ask for. 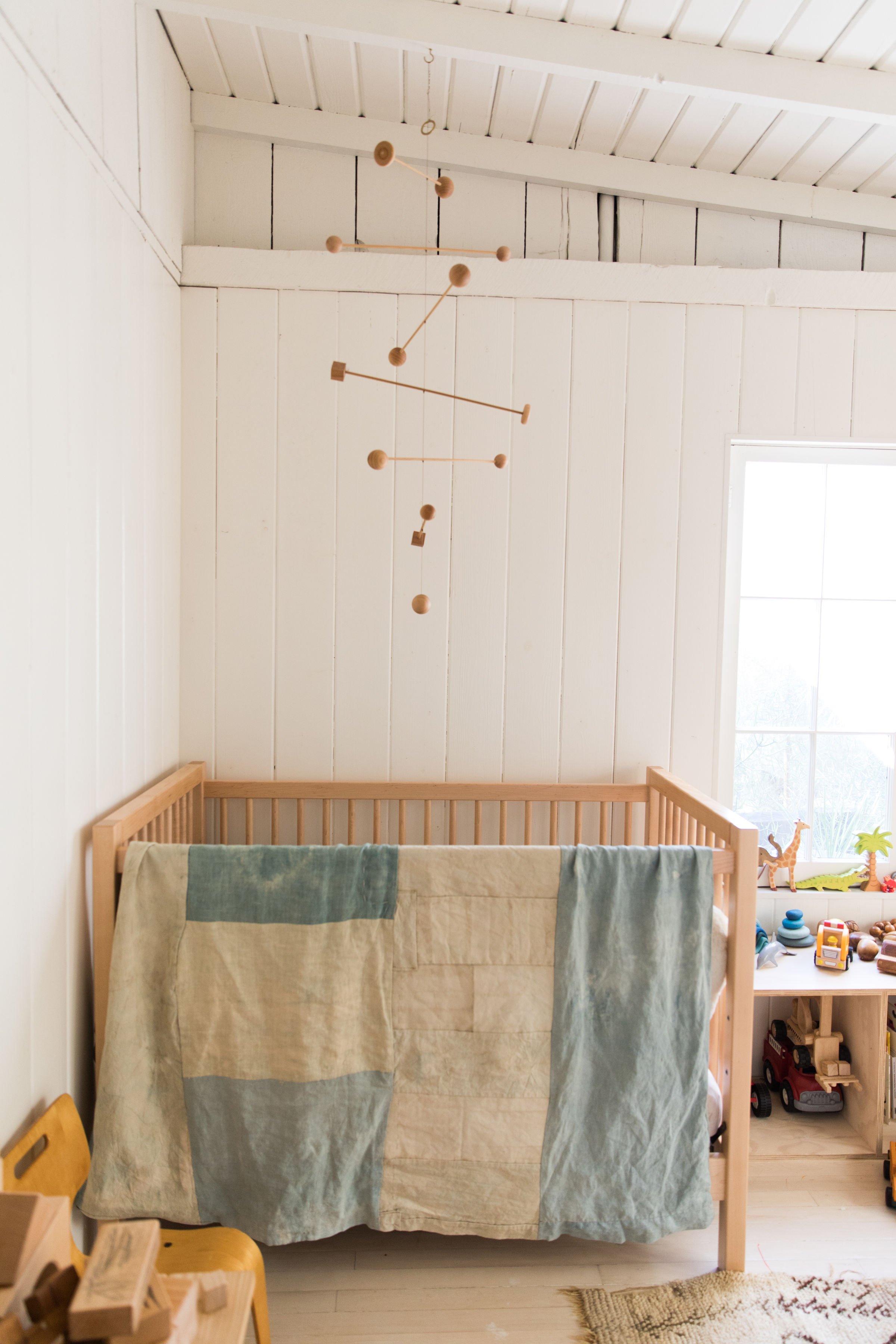 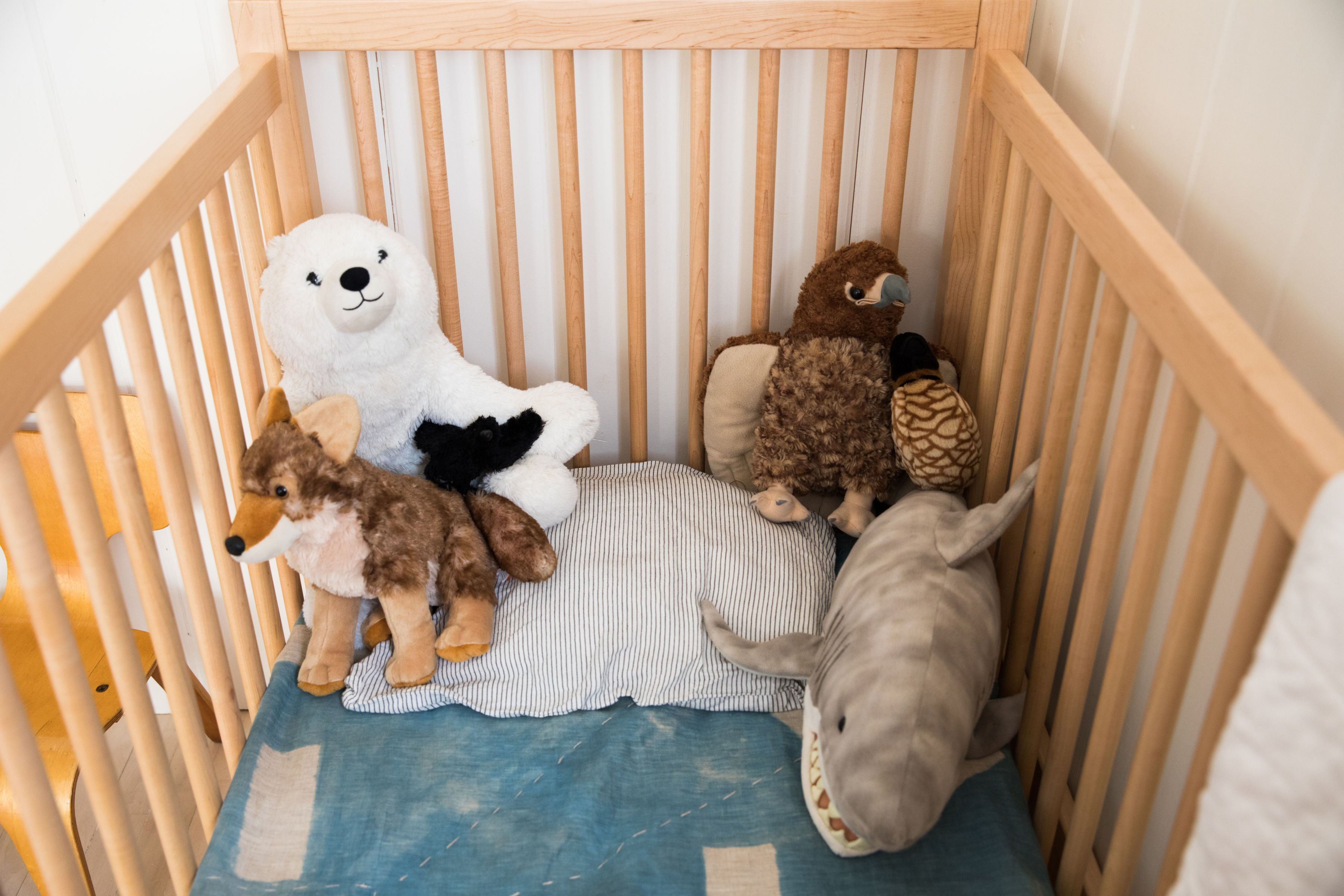 On beloved toys: Trucks are big with our son — garbage trucks, the construction trucks… I like the ones from the shop Merci Milo, and a lot of the stuff we get is from flea markets. I’m trying to not consume too much new stuff, but it’s kind of fun for you, as the parent, to get new things to play with, too! 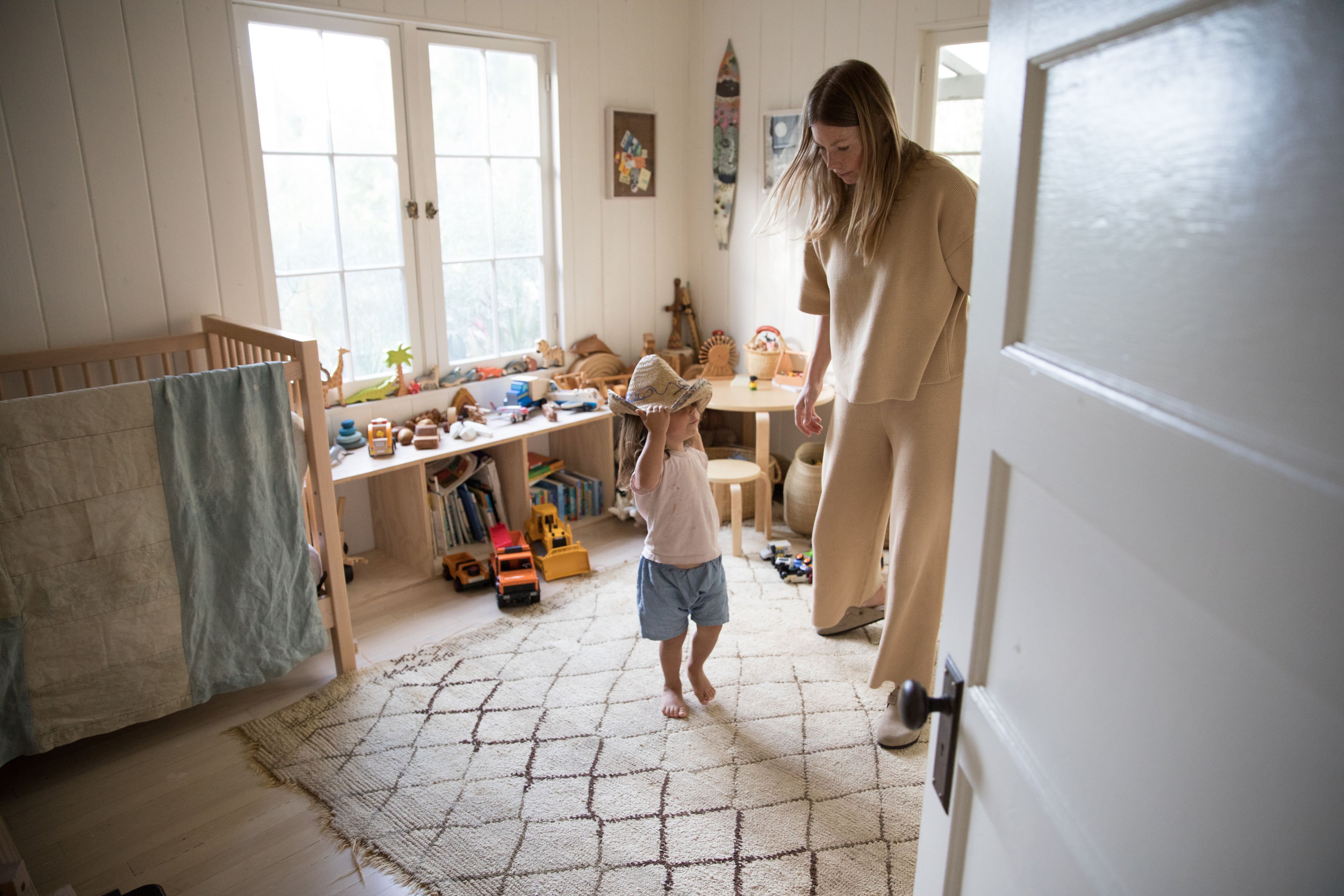 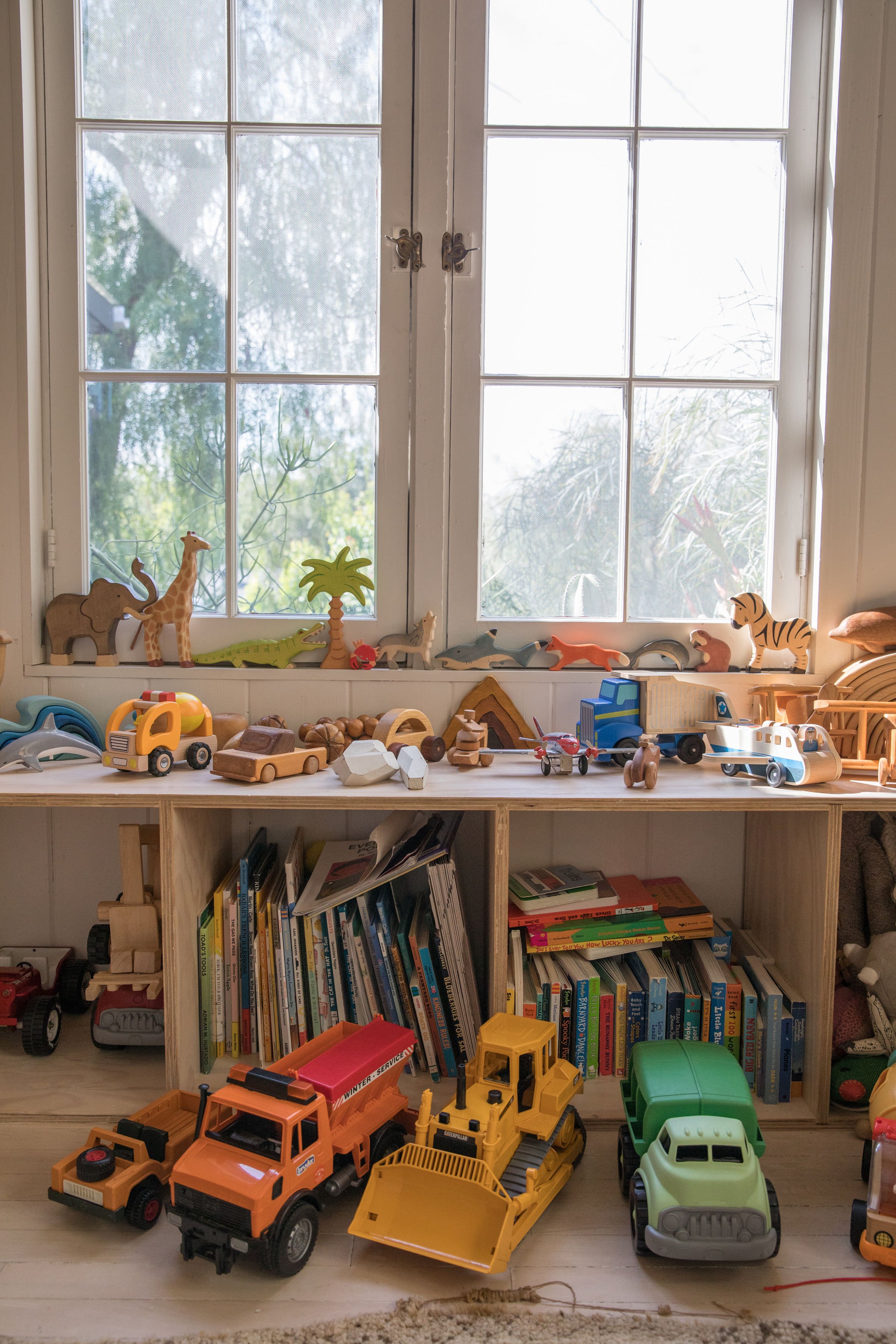 On bedtime stories: Before bed, we read his favorite truck books — Goodnight, Goodnight, Construction Site and Steam Train, Dream Train. He even sleeps with a truck, sometimes a big one! 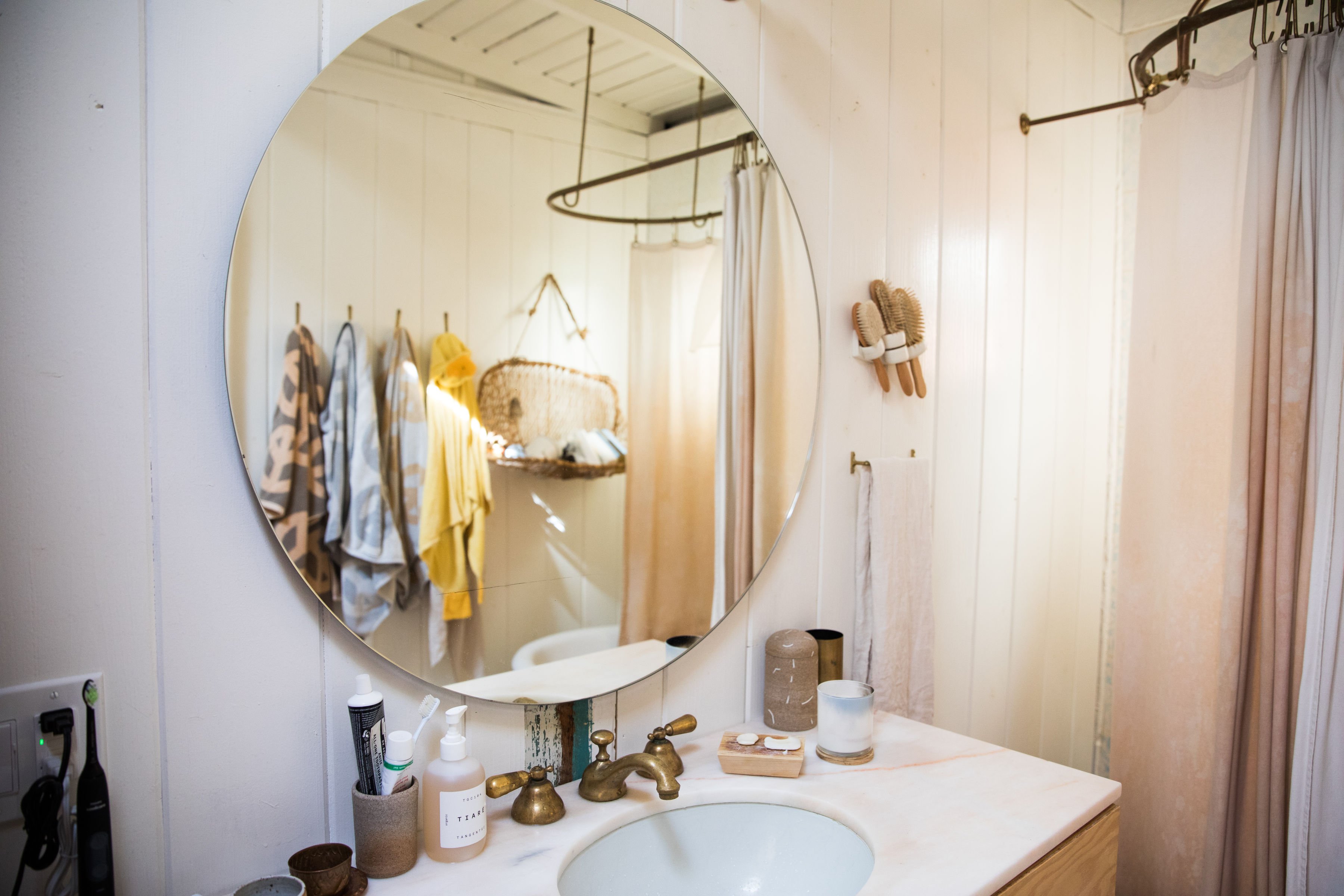 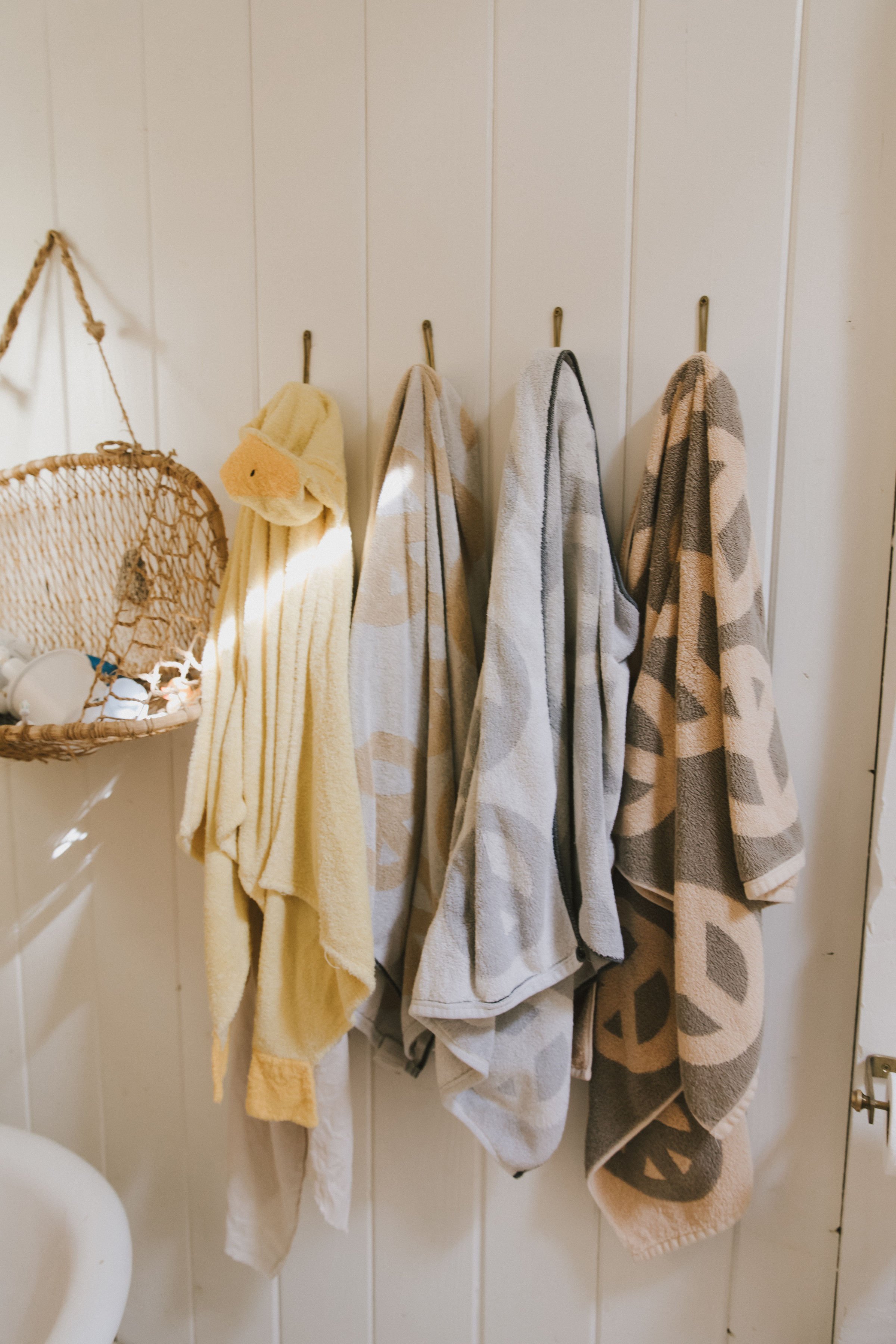 On being a visual person: Everybody has their form of communication. I’m not a writer, I’m not a public speaker — instead, I communicate visually, whether it’s through paintings or my home. To me, it’s the only way I feel like I can, you know, express myself…I can’t even find the words right now, haha! 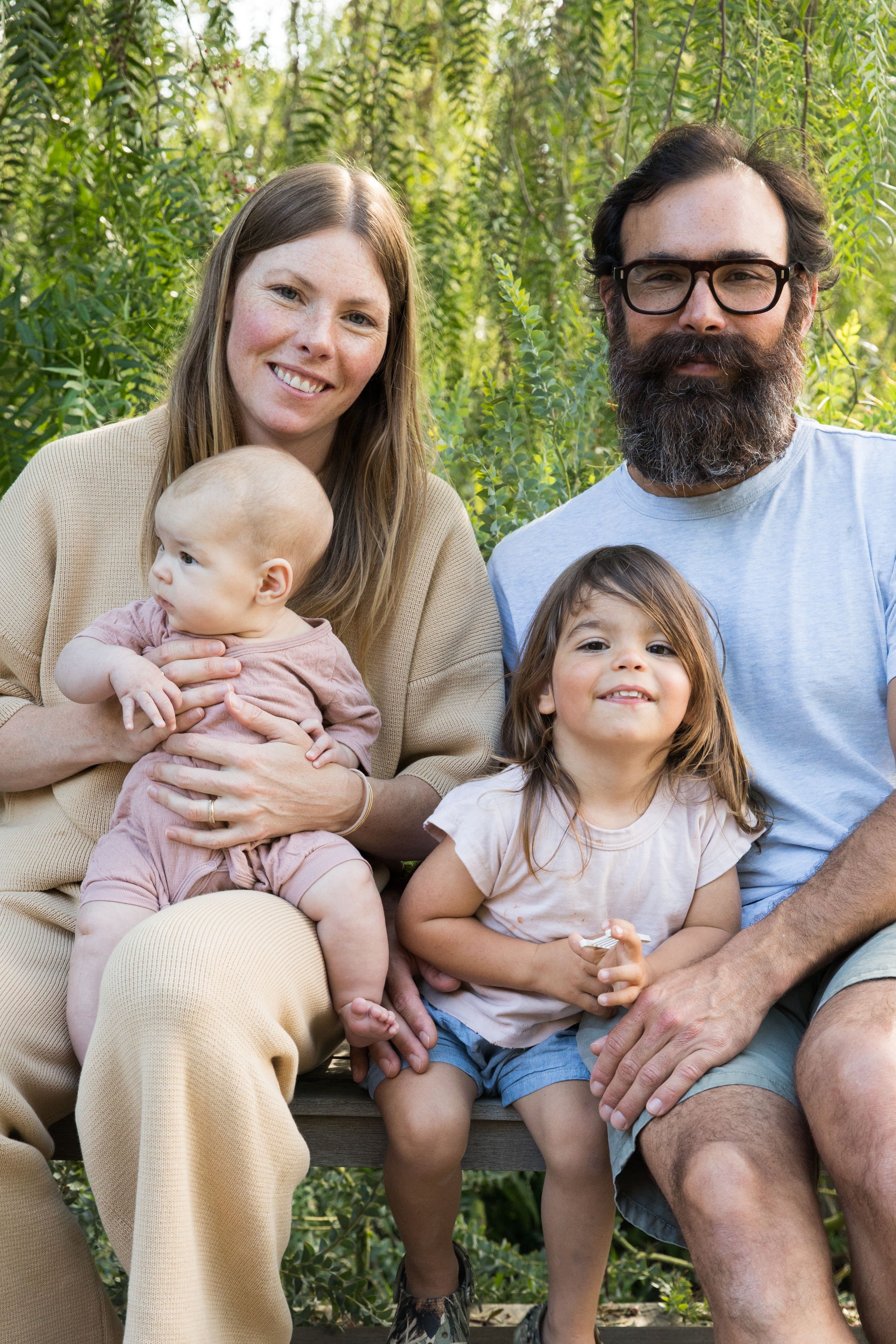 Thank you so much, Serena!

P.S. More home tours, including a Brooklyn apartment where three kids share a room and a downsized family house with a black living room.

(Photos by Lauren Ross for Cup of Jo.)

By Kelsey Miller
Design
This Apartment Is a Plant Lover’s Dream
April 23, 2019