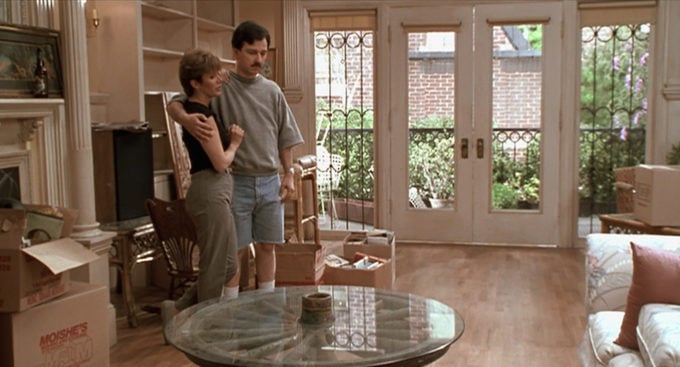 So, my boyfriend is moving in…

This marks the end of schlepping back and forth to one another’s places. It means there will be someone else around to help with high shelves and scary bugs. It’s also a step forward for the relationship. I feel quite good about it.

But then, all at once, it hit me: His stuff is moving in, too.

Don’t get me wrong, I want our space to feel mutual. I want him to feel seen and counted. And if we had unlimited space — or lived in a place other than New York City where square footage was easier to come by — I would happily invite all of the aliens into the home. But that is not reality.

So instead, I ask: Can you love someone, but not love their stuff?

“I like it! It works. It says home to me,” Jess says, as he walks through their inexplicably large movie apartment to behold his beloved table.
“All right, well let Harry and Sally be the judge,” Marie says.
Sally wrinkles her nose in distate.
“What’s so awful about it?” Jess asks. He is truly curious. No one ever thinks their own things are awful.

Of course, the scene ends with Jess stumbling out of the building, to place the wagon wheel on the curb.

“This process is something everyone goes through,” says my friend Lisa, who is long married and settled into a suburban home with two children. “Eventually, everything starts to feel mutual.” She pauses before adding, “For a while, I would make things disappear when Jeff was away on business trips.”

“My partner refuses to part with the legless sectional that spreads apart when you sit on it,” says another friend, rolling her eyes.

“I think I was the wagon wheel person,” laughs another friend. “When we moved in together, I didn’t know anything about design!”

Where I am concerned with aesthetics, my boyfriend is preoccupied with practicality. He controls the land of security cameras and carbon monoxide detectors, while I find ways to conceal them.

“Where will we keep my fire extinguisher?” he recently asked, brandishing the large red monstrosity.
“Um, nowhere?” I offered.
Indeed, I recognize that fire extinguishers are for safety, not for beholding. But does my small Brooklyn apartment need to resemble an amateur fire station?

Later that night, we were reading in bed when he held up his phone screen. I braced myself for whatever hideous safety item was surely waiting to greet me. Instead, I saw this design-y fire extinguisher, in the shape of a duck. To some, this would seem like an utterly absurd purchase. To me, it was a beautiful olive branch — the perfect blend of practical (him) and ridiculous (me).

At the end of the day, even welcome changes can be scary. I recognize that on some level, I worry much less about maintaining a “perfect” home than I do about bidding farewell to another time of my life, or succumbing to the fear that I’m losing some part of my identity. In an otherwise chaotic world, my home has long been the one variable I could control. I may not be able to alter world events, but I can organize the heck out of a bookshelf.

A few days ago, while walking past the fortress of boxes that now clutters the center of his apartment, I grew frightened. Then I stopped and took a deep breath.

“We’re going to find this funny in a year!” I said, and meant it. I have no doubt that someday, we’ll achieve the right balance. Until then, at least we have the duck.

What’s your version of the wagon wheel coffee table? Have you ever had any ongoing debates with a partner or a roommate? I’d love to discuss.

P.S. My Brooklyn apartment (before the merger) and how to know your partner is the one.